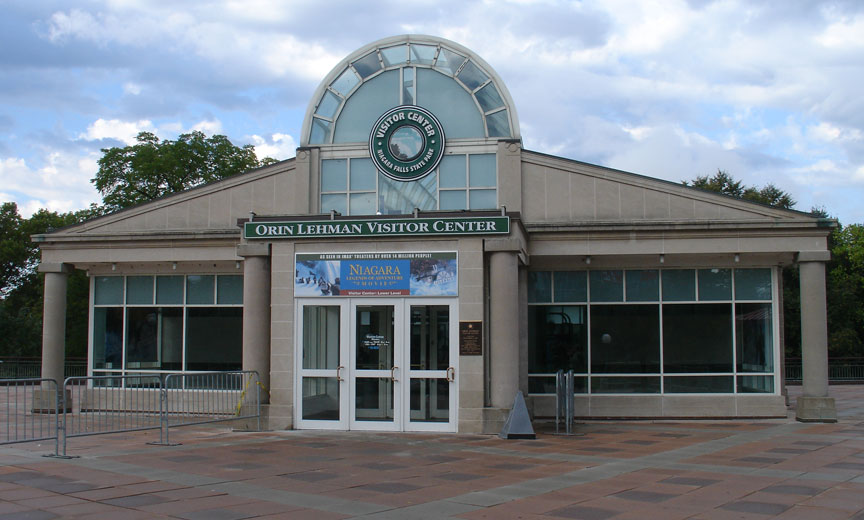 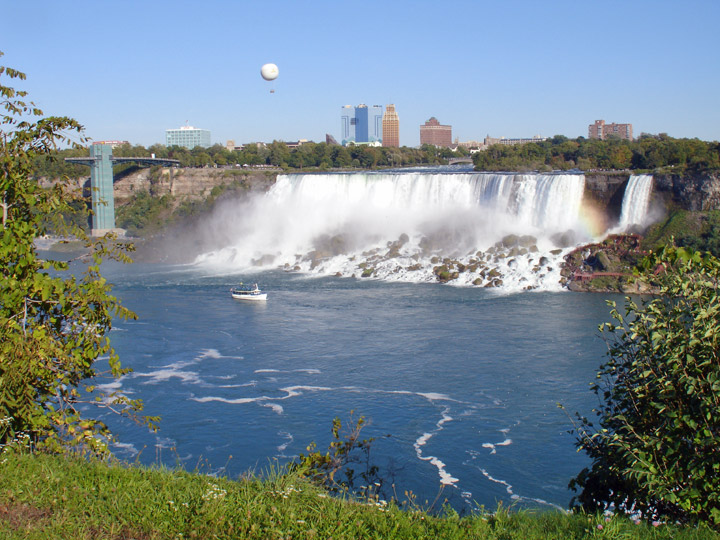 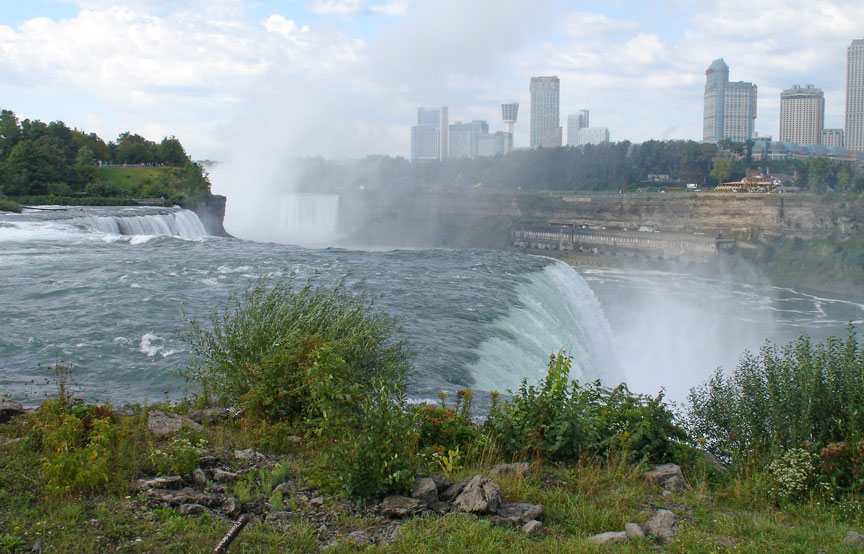 Niagara Falls (waterfall), waterfall in east central North America, located on the Niagara River, in western New York and southeastern Ontario. Niagara Falls consists of two cataracts: the Horseshoe, or Canadian, Falls (57 m/187 ft high), on the Canadian side of the river, and the American Falls (55 m/182 ft high), on the United States side.

Photos of Niagara Falls in Ontario 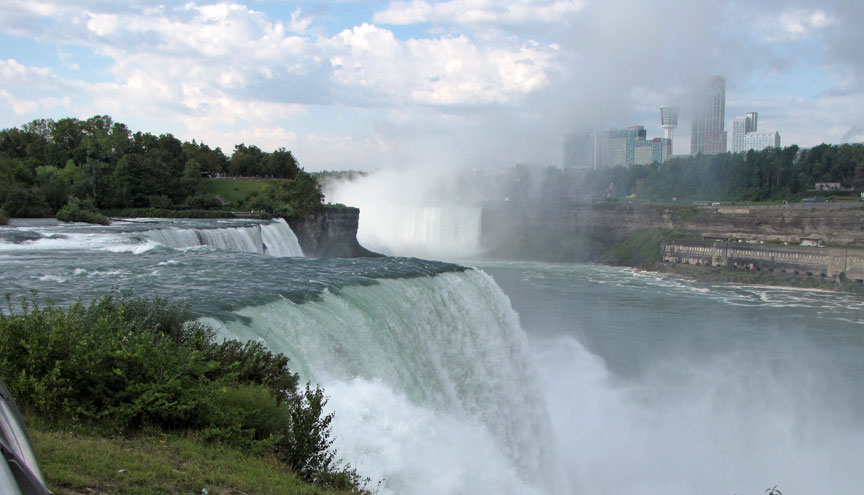 The waterfalls are separated by Goat Island, New York. The crestline of the crescent-shaped Horseshoe Falls, which carries about nine times more water than the U.S. cataract, is about 670 m (about 2,200 ft) long, and the fairly straight crest of the American Falls measures 328 m (1,075 ft). A small section of the American Falls near Goat Island is also known as Bridal Veil Falls. 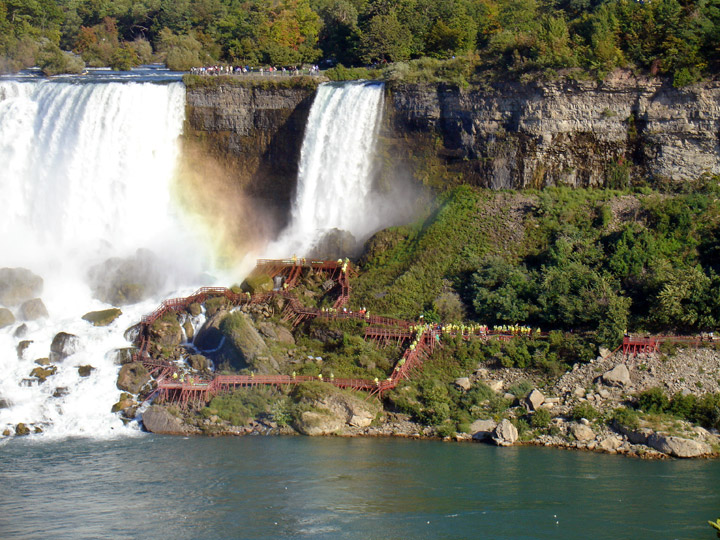 Bridal Veil Falls on the right

Niagara Falls was formed about 12,000 years ago, when glaciers retreated north, allowing water from Lake Erie to flow over the Niagara Escarpment, a ridge that extends in an arc across the northern Great Lakes region, from Wisconsin to New York. Erosion slowly pushed the waterfall about 11 km (about 7 mi) upstream, forming the Niagara Gorge. Before large water-diversion projects were built in the 1950s and 1960s, Horseshoe Falls was receding at a rate of more than 1 m (3 ft) per year. With reduced flows slowing erosion, it will take about 30 years for the falls to recede the distance it once did in a year. 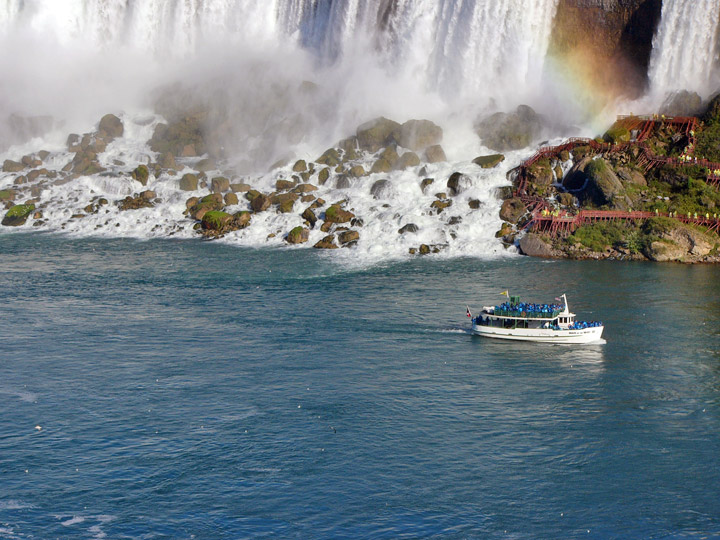 rock slope from the break off 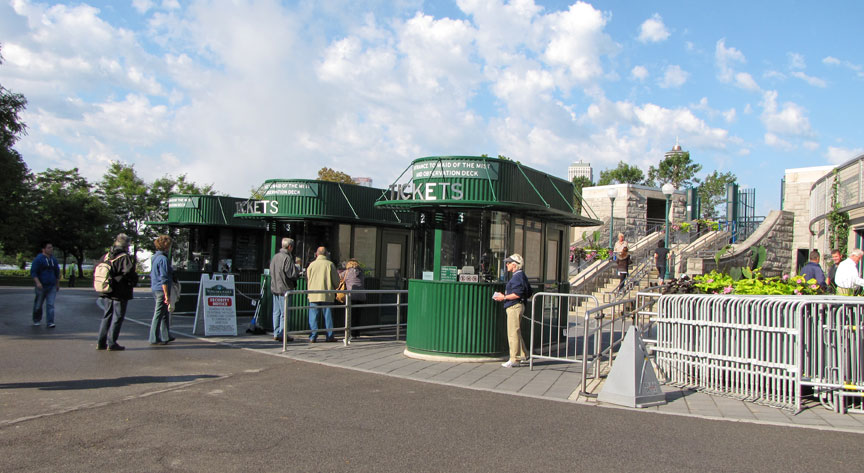 tickets for the Maid of the Mist observation tower 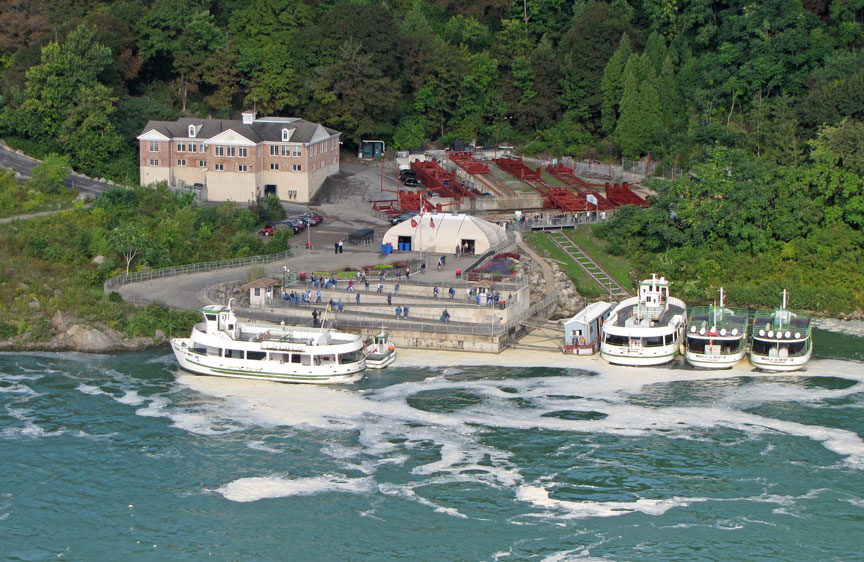 In 1954 a considerable portion of the American Falls broke off, creating a large talus, or rock slope, at the base of the cataract. In order to study ways of preventing further rock falls and to remove some of the talus, the American Falls was successfully "shut off" for several months in 1969 by a dam that was constructed between the U.S. mainland and Goat Island. 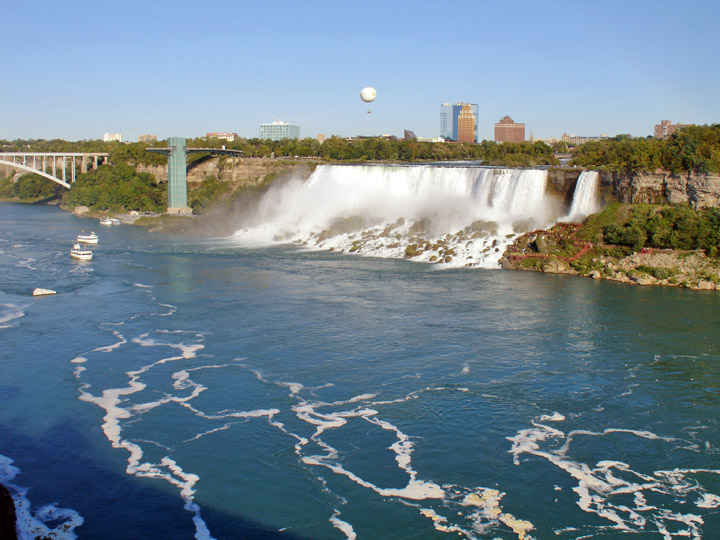 Rainbow International Bridge on the left

Niagara Falls is a great tourist attraction, luring millions of visitors each year. The falls may be viewed from parks located on either side of the river, from observation towers, from boats, from Goat Island, and from the Rainbow Bridge, located a short distance downstream. Visitors also may enter the Cave of the Winds, situated behind a curtain of falling water near the base of the American Falls. 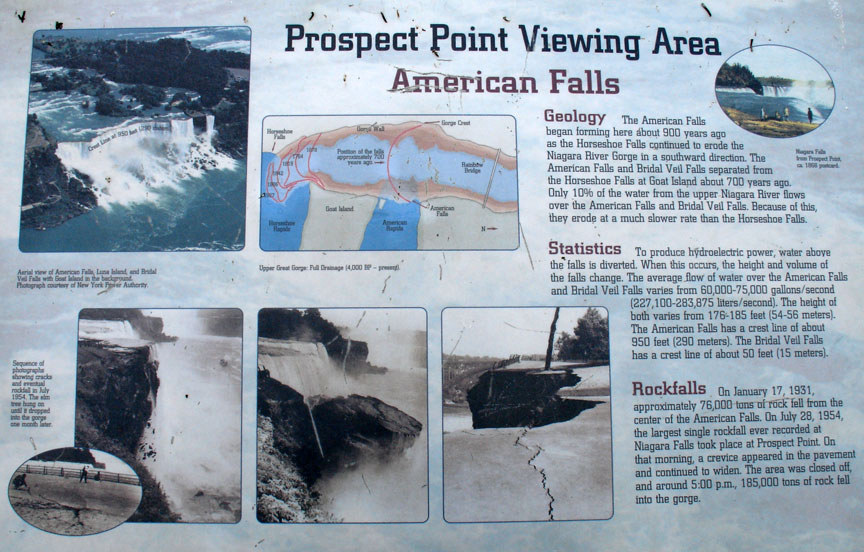 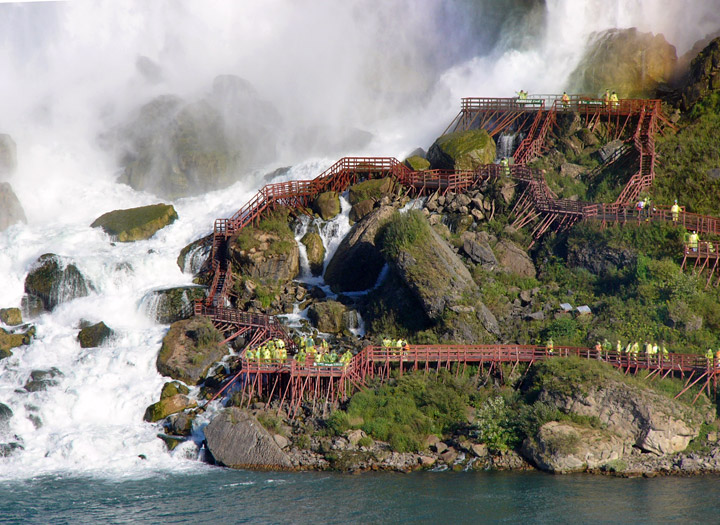 walk to the base of the falls

Samuel de Champlain, a French explorer, probably visited Niagara Falls in 1613. Father Louis Hennepin, a Flemish monk, is known to have visited the waterfall in 1678; he later published an eyewitness description of it. 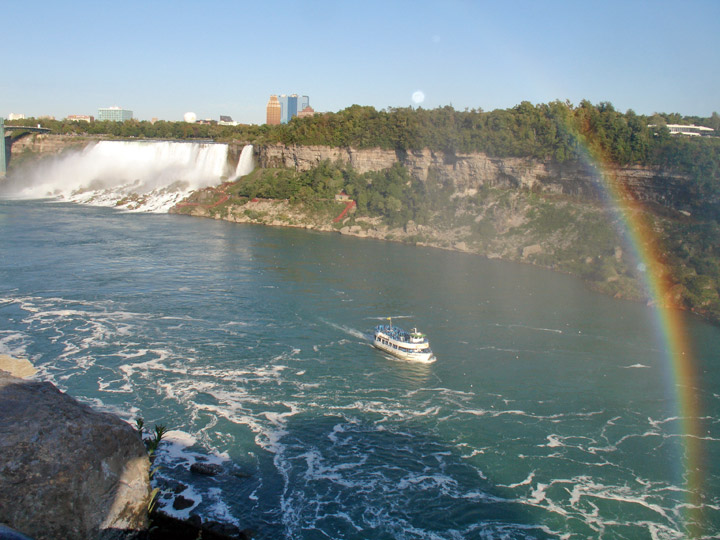 The Niagara's large volume of flow, averaging about 5,520 cu m (about 194,940 cu ft) per second, plus its steep drop, give the river great power potential. The waterpower probably was tapped first in 1757, when Daniel Chabert Joncaire built a sawmill on the upper river. In 1853 work started on a hydraulic canal to divert the waters of the upper river to drive machinery in mills and factories situated below Niagara Falls. In 1875 the first flour mill powered by the canal water was opened, and in 1881 the first hydroelectric generator was installed along the waterway. The first large-scale hydroelectric facility, the Edward Dean Adams Power Plant, was opened on the U.S. side in 1896. 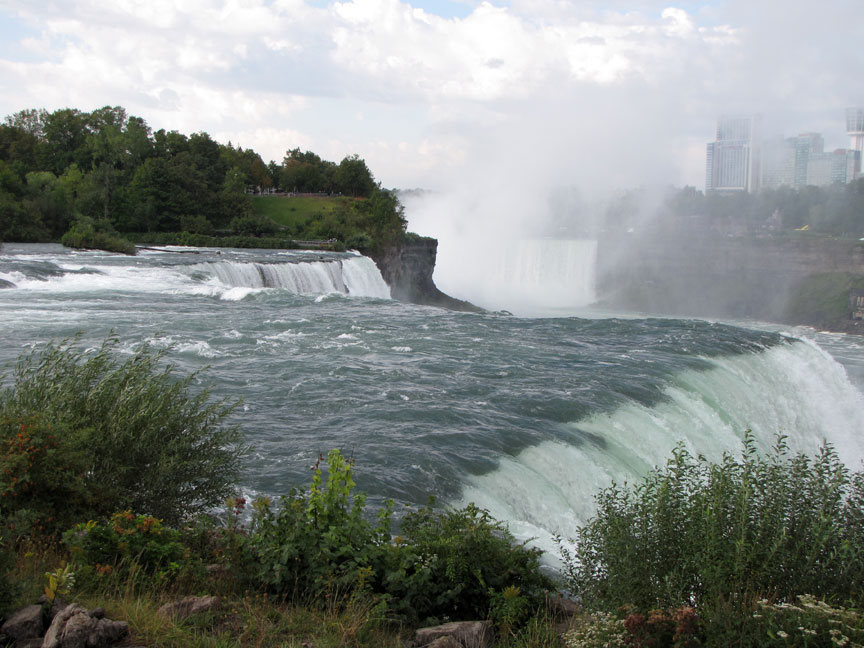 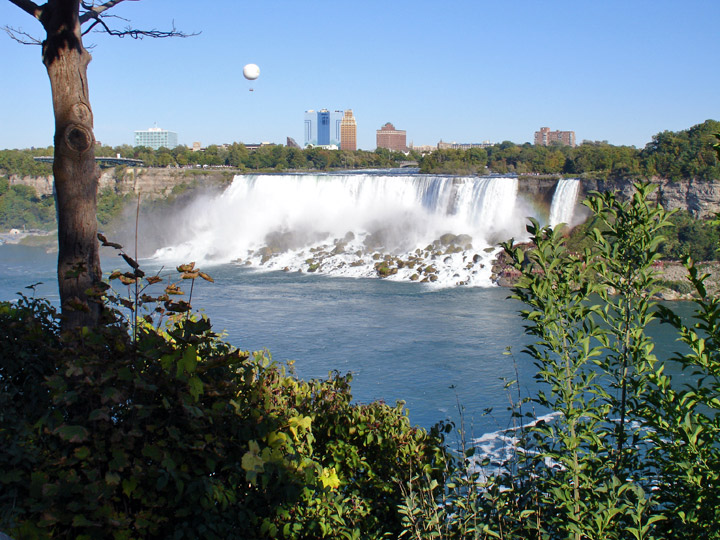 In 1950 the United States and Canada signed a treaty fixing the amount of water that could be diverted from the river for power generation, and soon thereafter two major hydroelectric projects were constructed. The Canadians built the twin Sir Adam Beck-Niagara generating stations (completed 1958; capacity, with associated pumped-storage facility, 1,815,000 kw) at Queenston, Ontario. 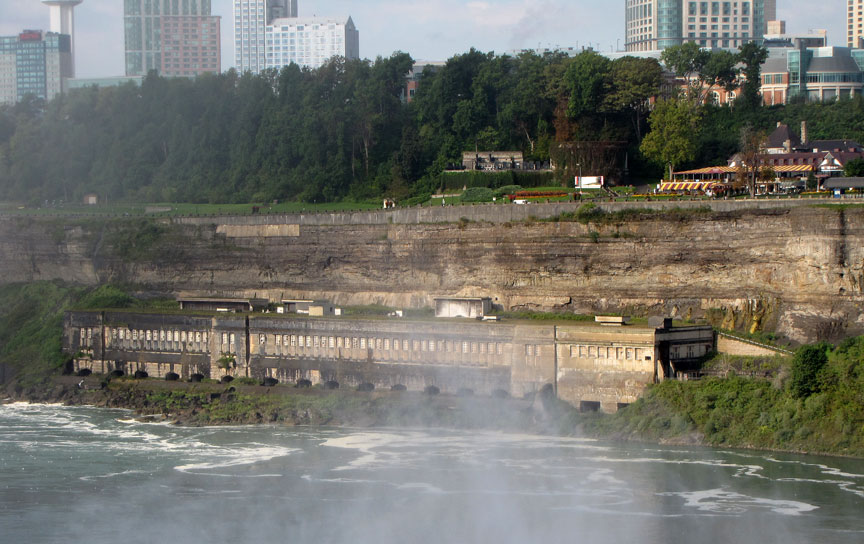 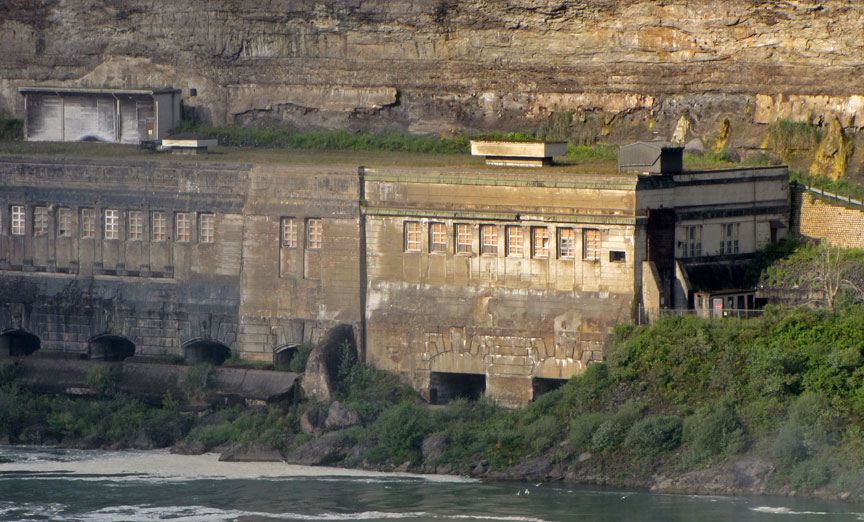 The Power Authority of the State of New York constructed the Robert Moses-Niagara Power Plant (completed 1963; capacity, with associated pumped-storage facility, 2,400,000 kw) near Lewiston, New York. Both projects, each located about 6 km (about 4 mi) below Niagara Falls, are driven by water diverted just above the falls and conveyed by underground conduits and canals to turbines. Much of the hydroelectricity is consumed by industries in the nearby cities of Niagara Falls, New York, and Niagara Falls, Ontario. 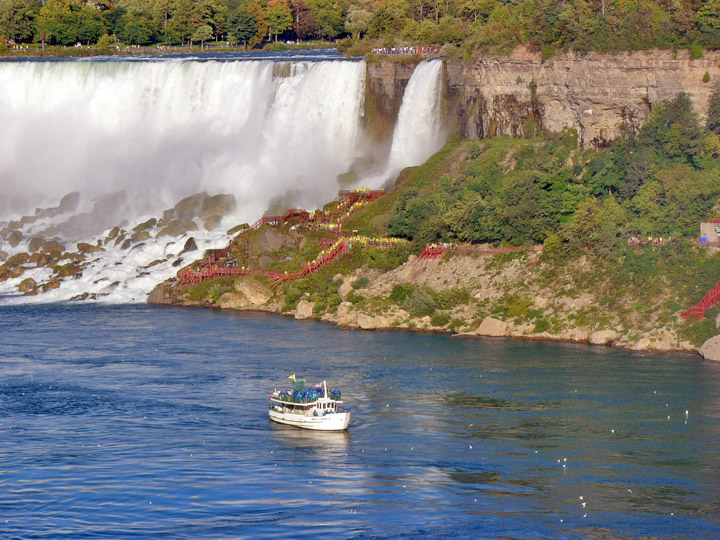 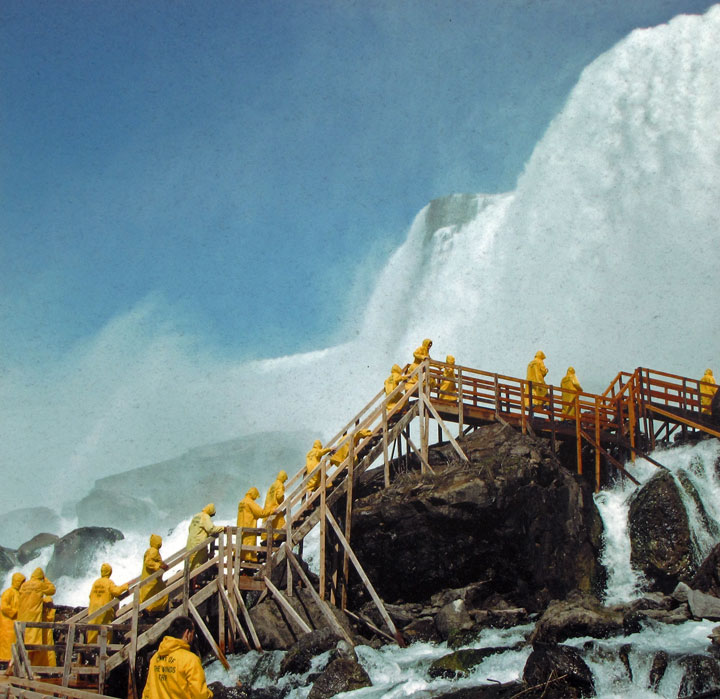 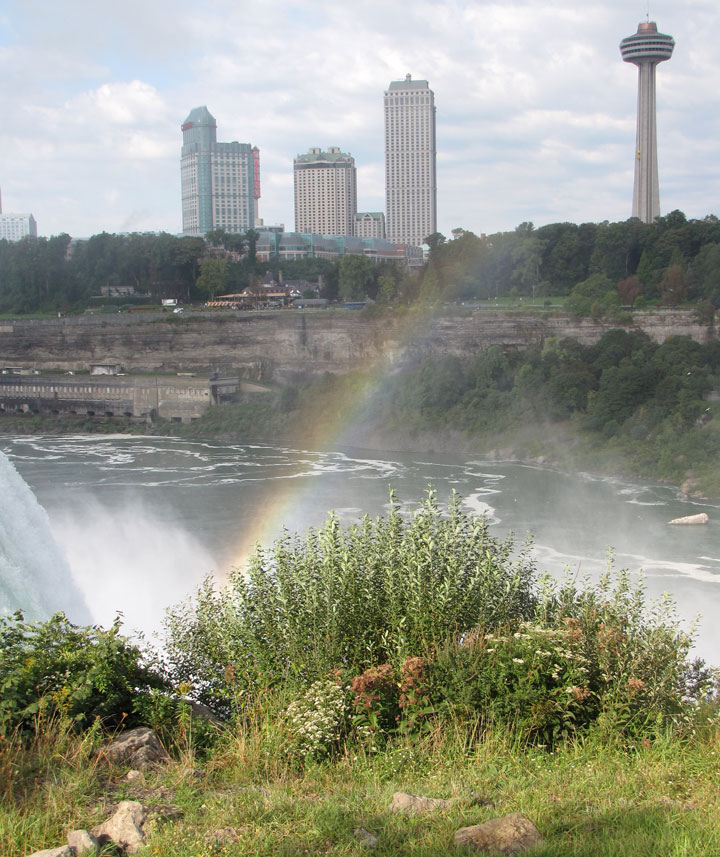 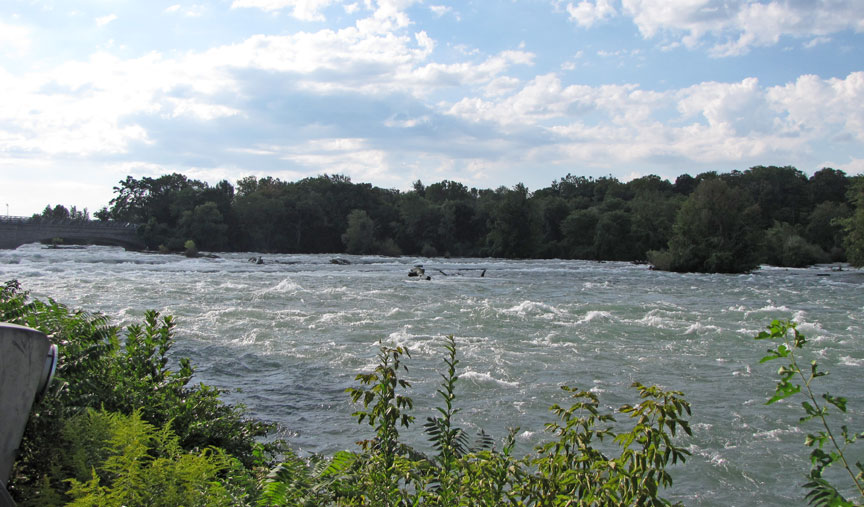 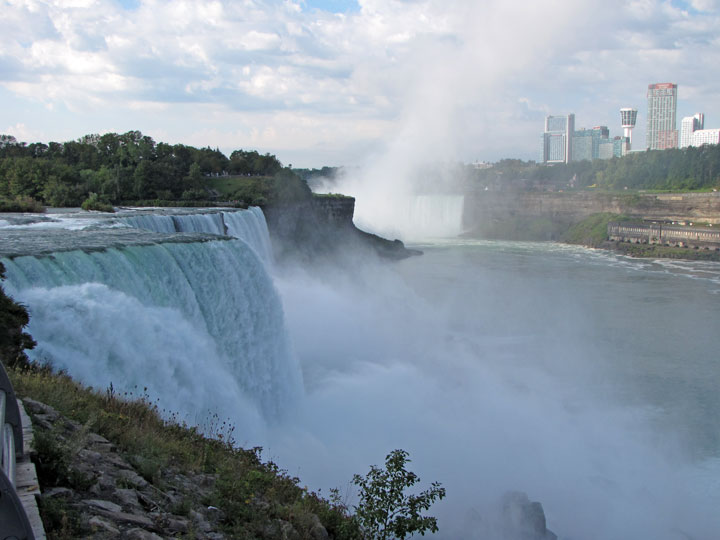 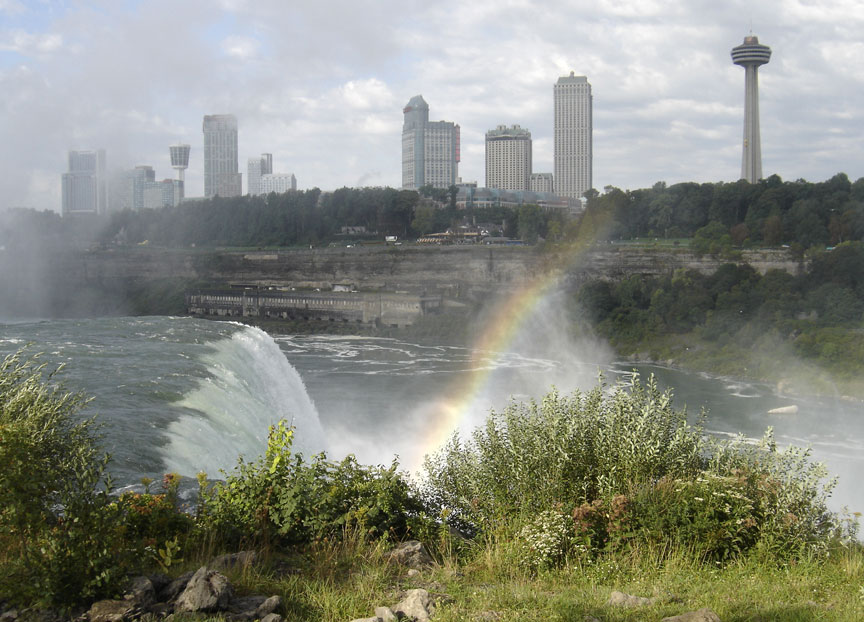 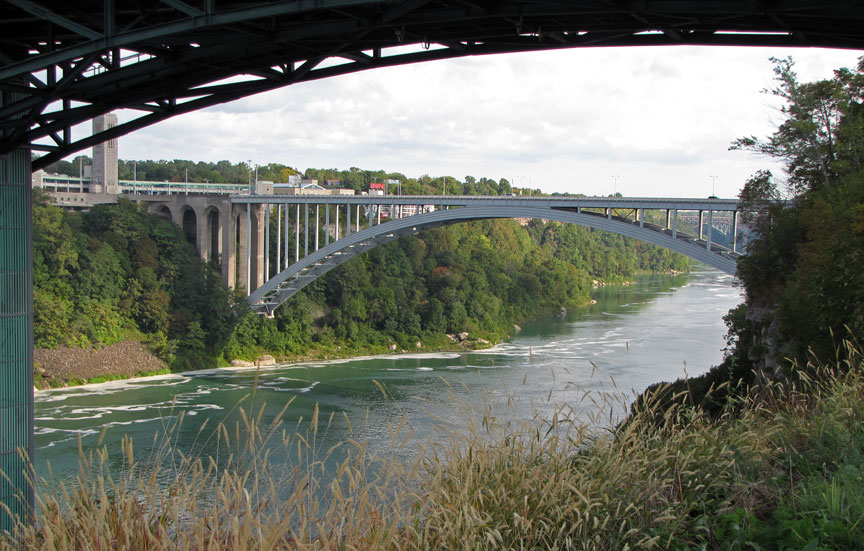 the river after the falls 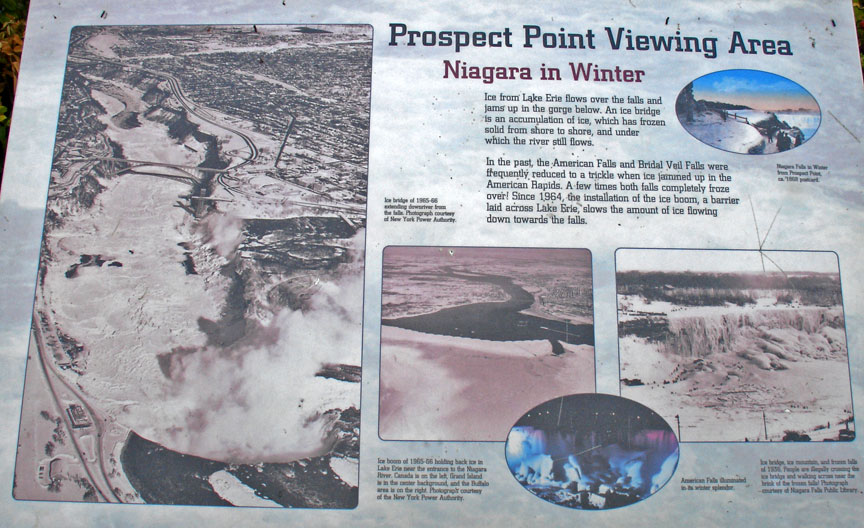 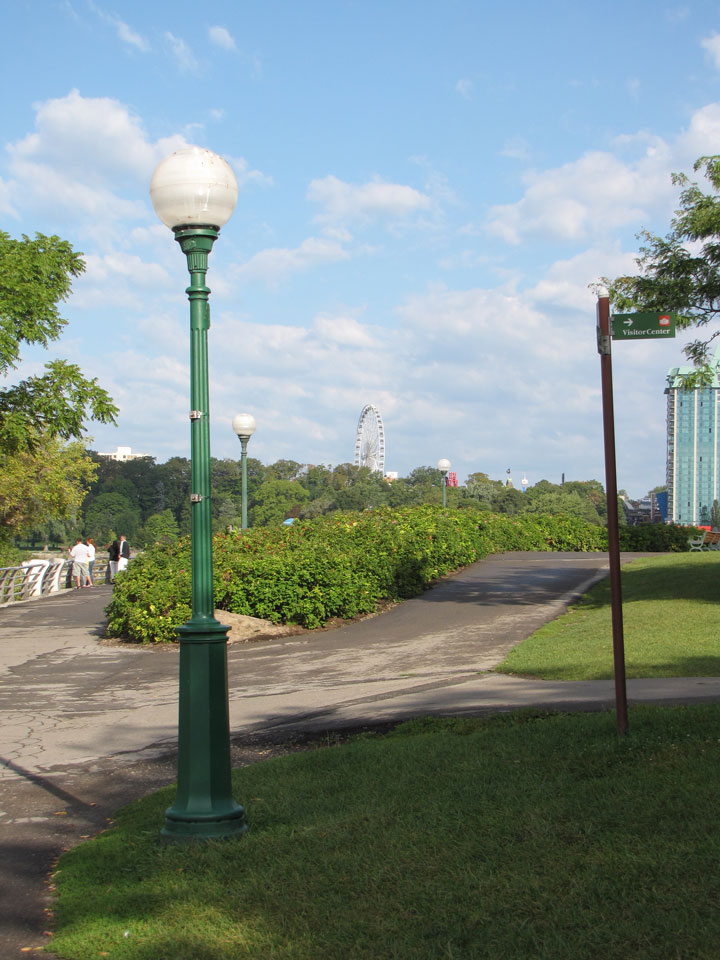 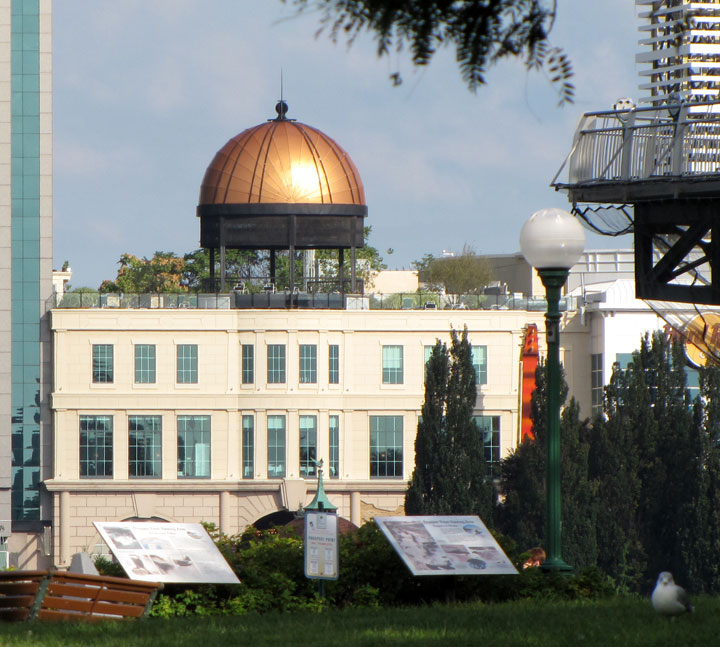