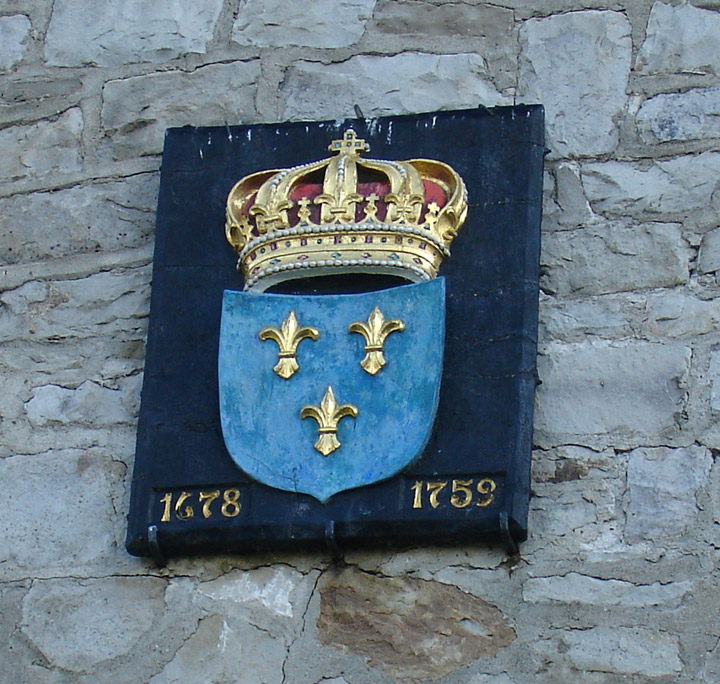 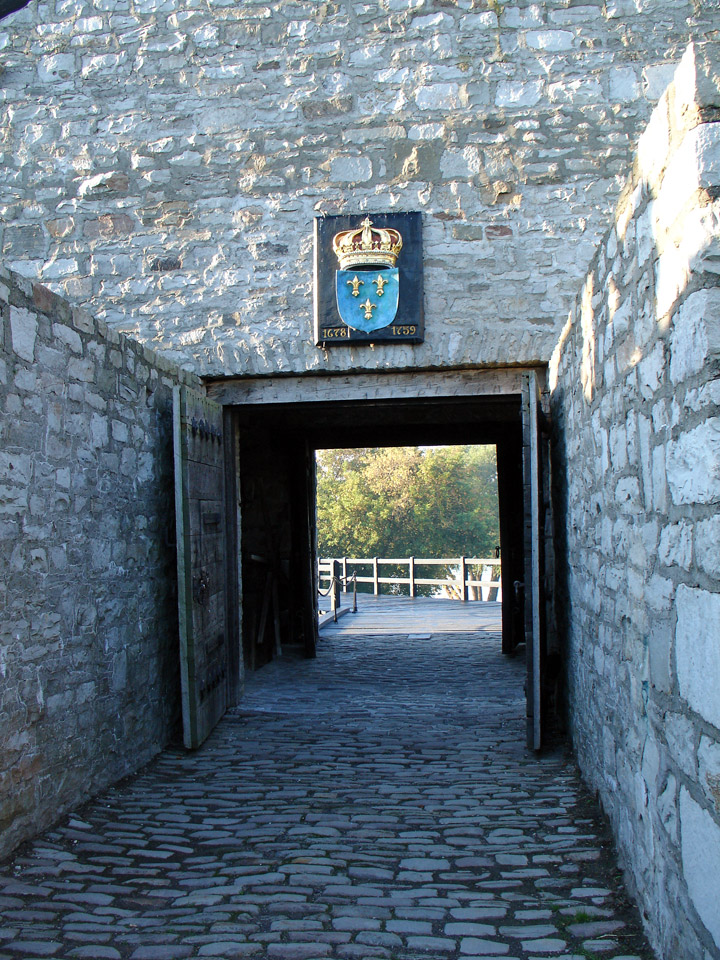 the Gate of the Five Nations

From 1756 until about 1805 the main entrance of Fort Niagara was located on the river side of the South Bastion. The French named the gate in honor of the original Five Nations of the Iroquois Confederacy. The drawbridge was protected by five cannon located in the Dauphin Battery. The gun positions facing the Canadian shore were installed in the 1840s. The Dauphin Battery and the stone gatehouse were reconstructed in 1931 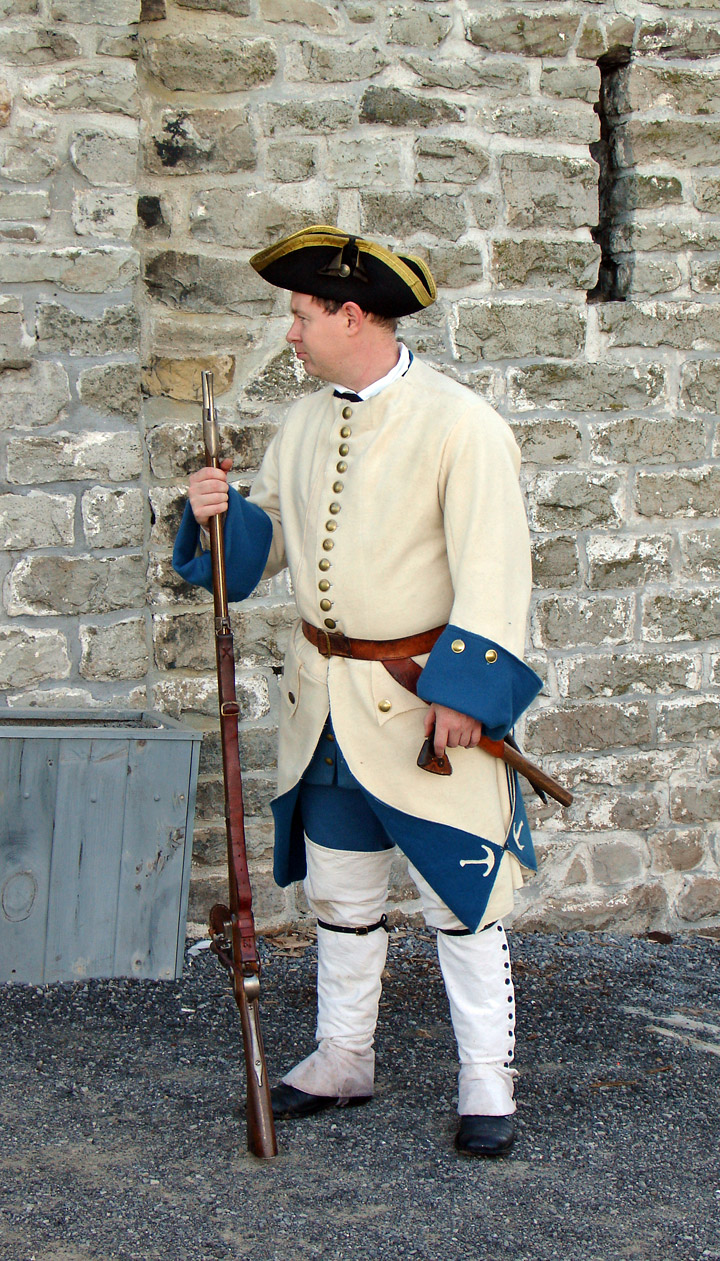 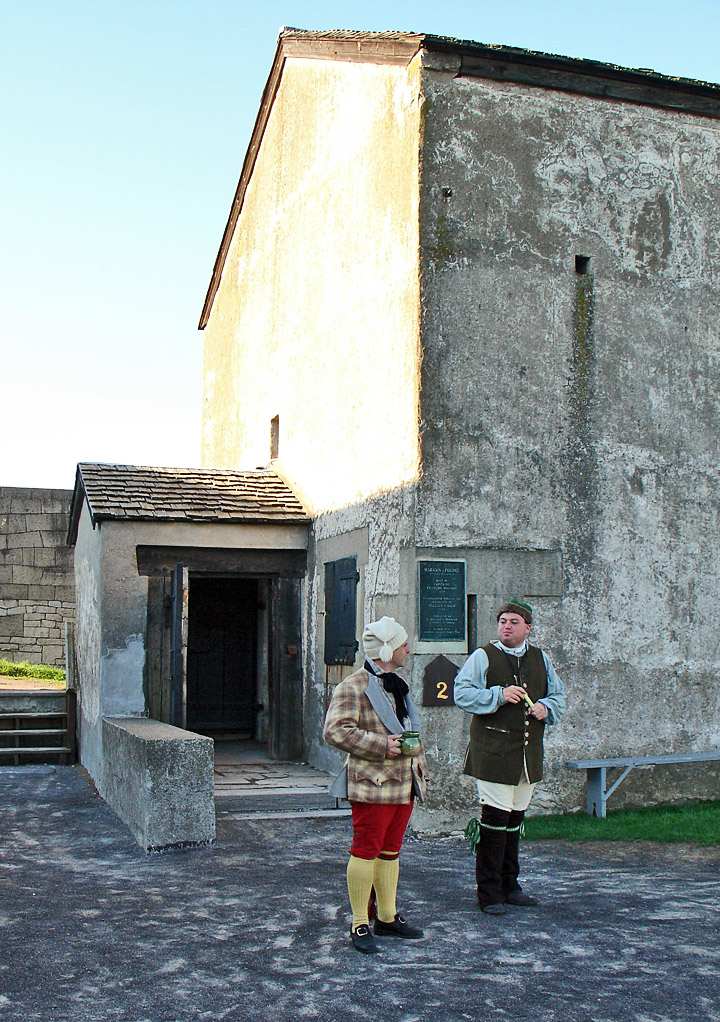 The French erected this building which survived the seige of 1759. Its massive arched ceiling, topped by a thick layer of earth, protected the gunpowder from mortar shells. The garrison's ammunition supply was stored here as late as 1929. In 1826, William Morgan, considered by Freemasons to be a renegade to their order, was kept prisoner in the Magazine. His mysterious disappearance has never been solved and sparked much of the anti-Masonic feeling in the United States at the time. 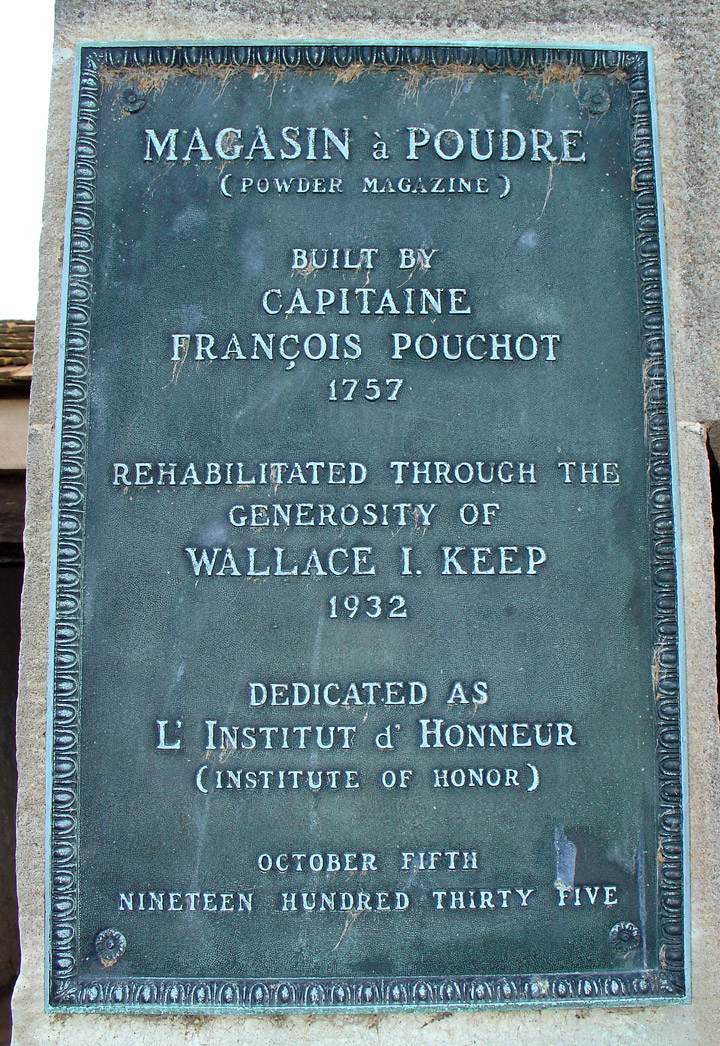 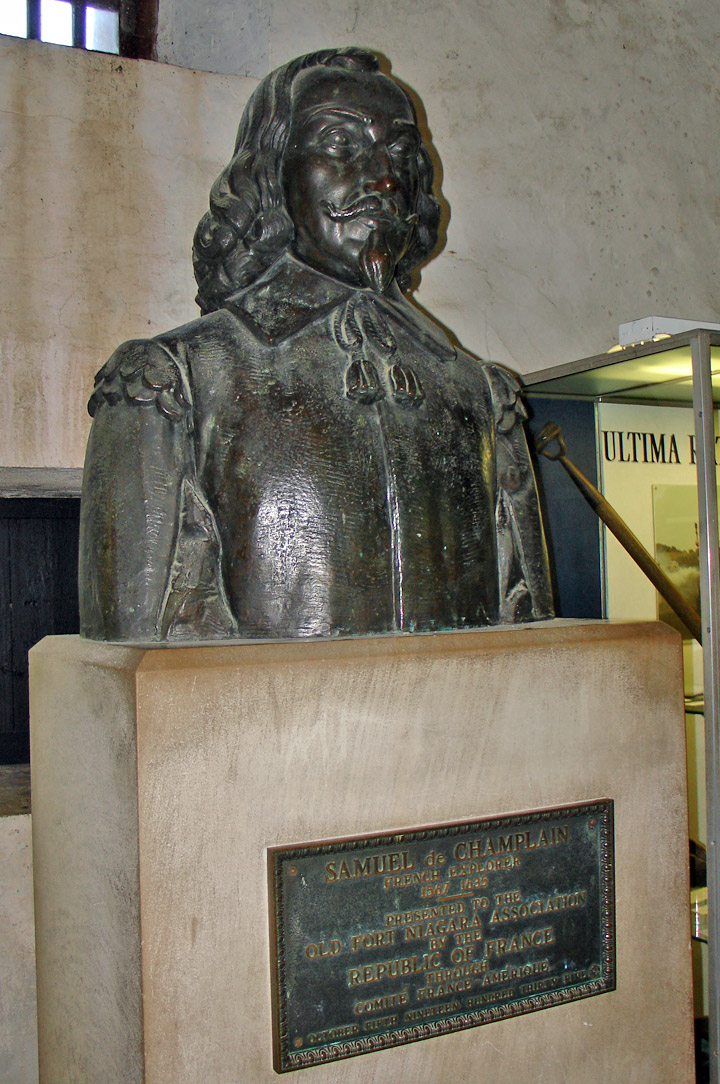 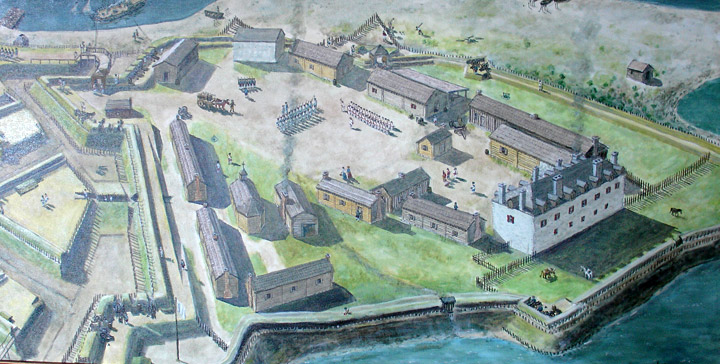 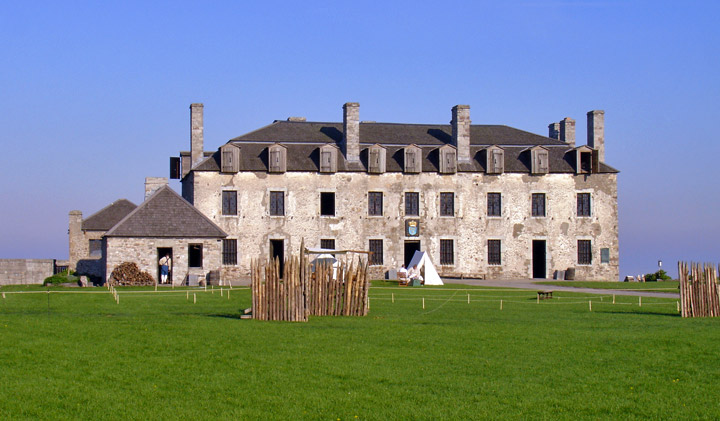 The oldest building of the Fort and, indeed, in the eastern interior of North America, the "Castle" was originally the sole structure of Fort Niagara. To calm the suspicions of the hostile Iroquois, the French designed it to resemble a large trading house. The building was, in actuality, a strong citadel capable of resisting Indian attack. The castle has been restored to its 1727 appearance, at which time most garrison facilities were located within its walls. Following expansion of the Fort in 1755-57, the Castle was used as officer's quarters. Army facilities resided here as late as World War I. 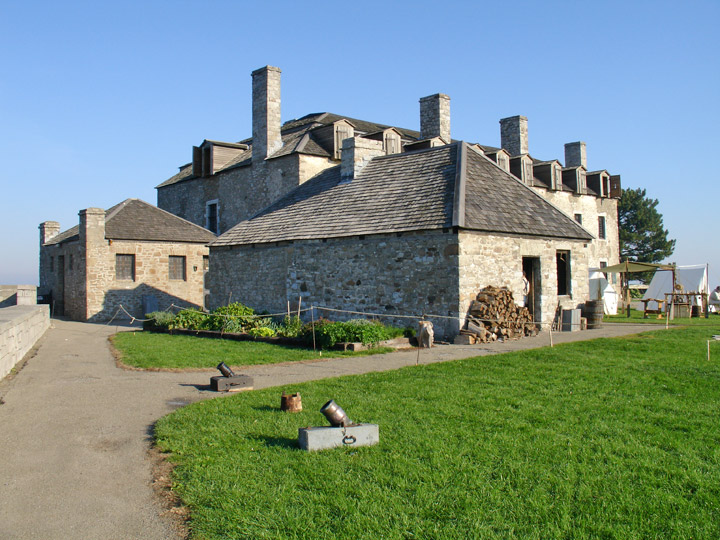 The building was designed by Gaspard-Joseph Chaussegros de Lery, chief engineer of New France. His layout of the ground floor included storerooms, a powder magazine, bakery, guardhouse, and well. Living quarters and chapel were on the second floor. Overhanging or "machicolated" dormers on the attic level provided defensive positions for muskets and light cannon and gave the structure its original French name - the "machicolated house." The term "Castle" is not believed to have been in general use until U.S. officers lived here in the 1830s. 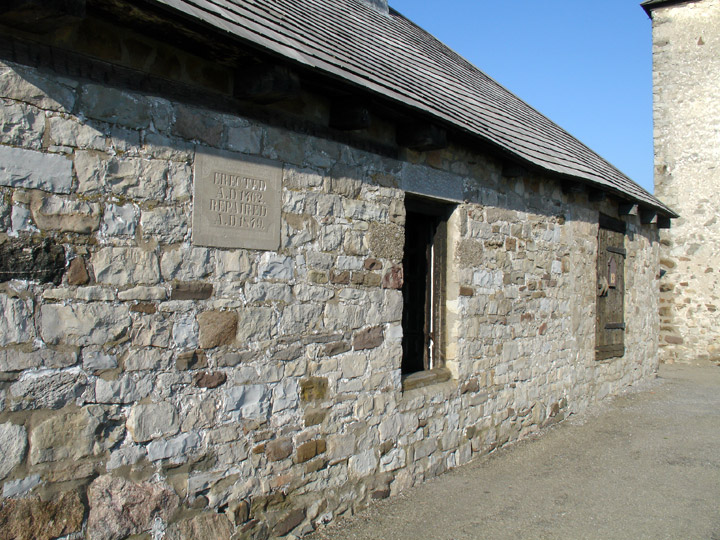 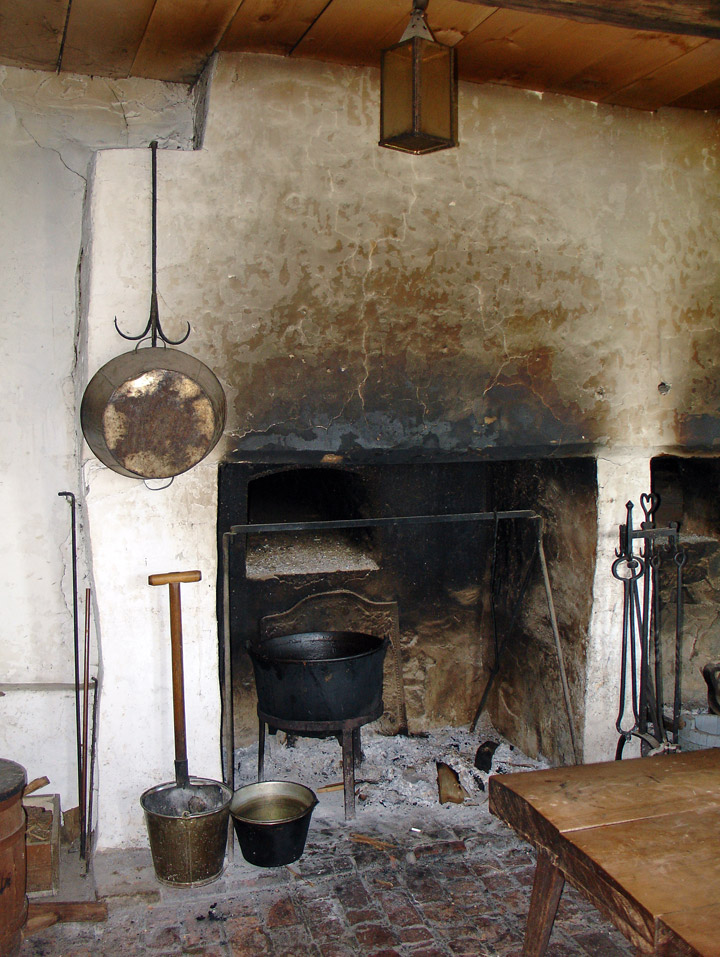 The British constructed this building to replace a French bakery destroyed by fire in 1761. The foundation of the double ovens was salvaged from the earlier structure. Bread for the garrison was baked here until 1870. 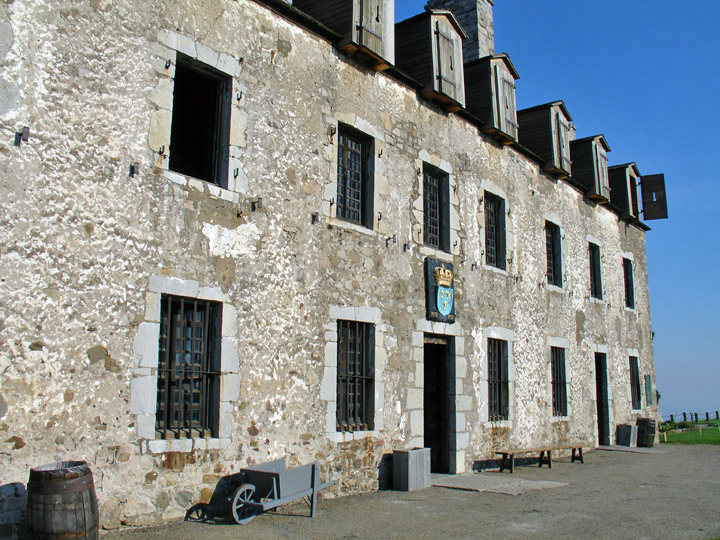 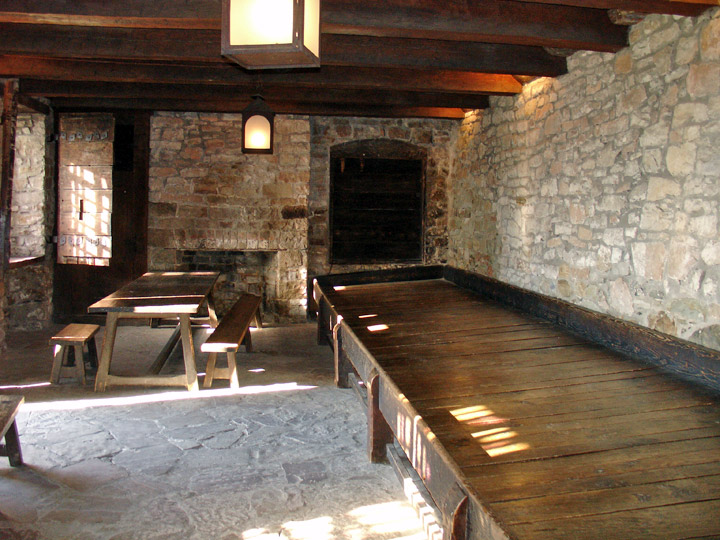 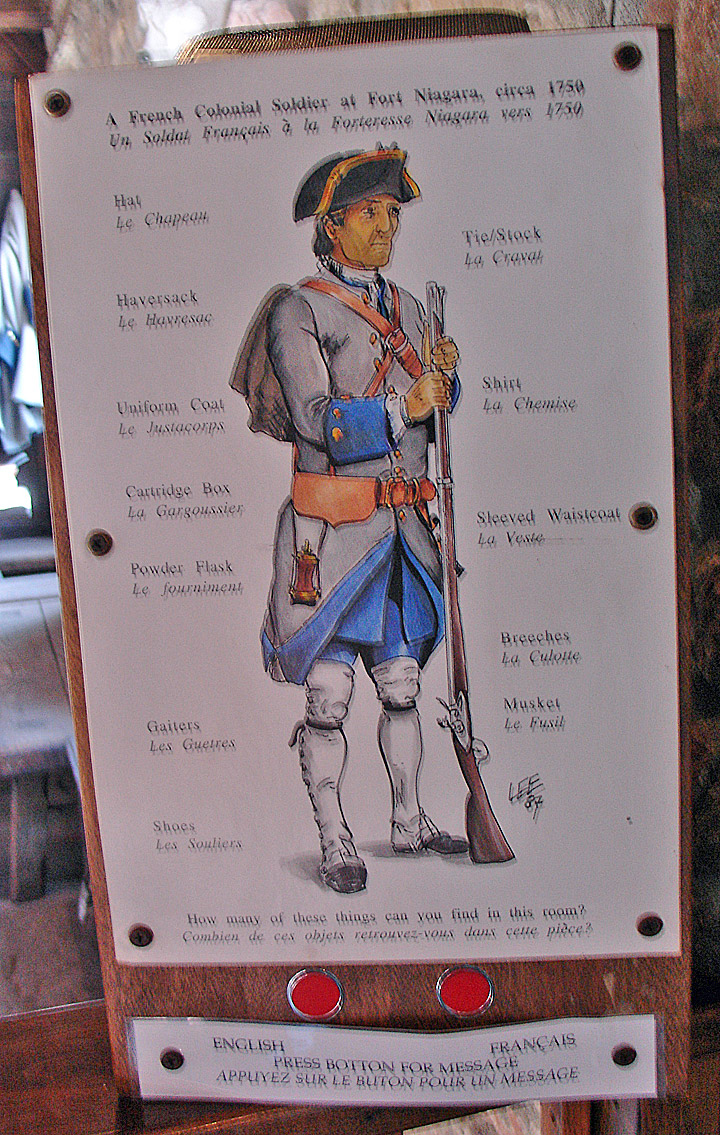 uniform of the French Colonial soldier 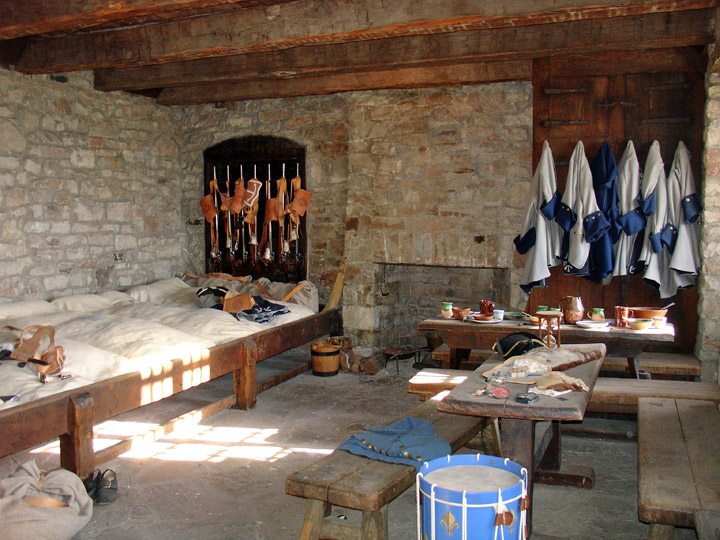 Across the vestibule is a barracks room, originally home to about 30 French soldiers.  The narrow room  at the west end of the corridor was used briefly in 1768 as a cell for Robert Rogers, the famous ranger of the French & Indian War and hero of the historical novel Northwest Passage. Accused of treason by the British authorities, Rogers was kept chained and guarded here while being taken to Montreal for trial. 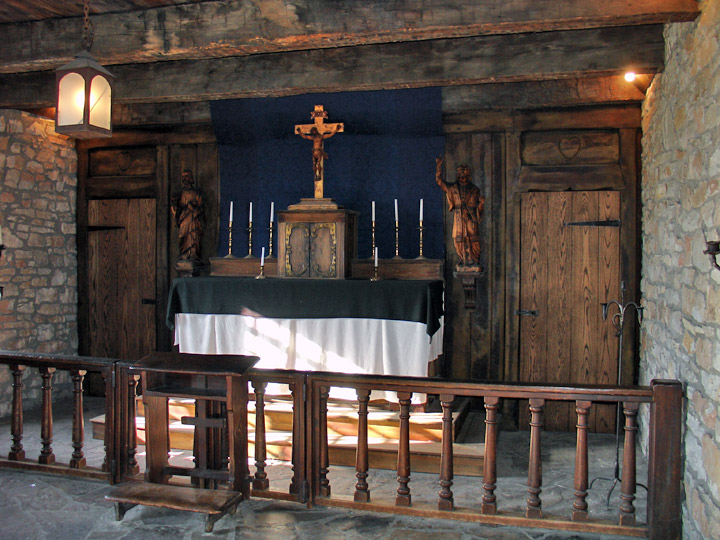 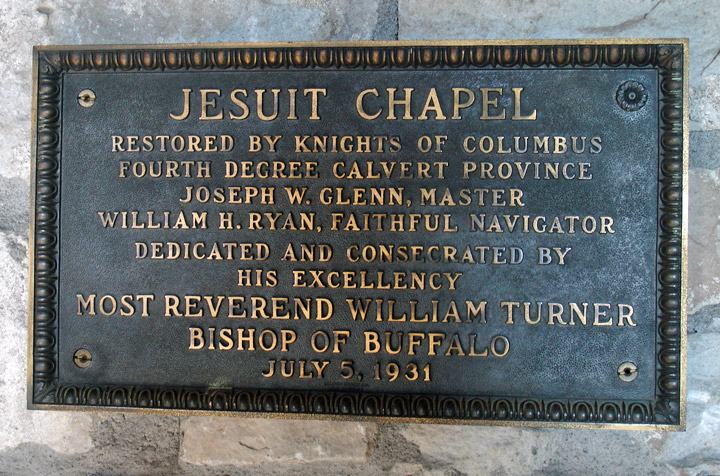 The chapel on the second floor was the earliest permanent church in western New York. 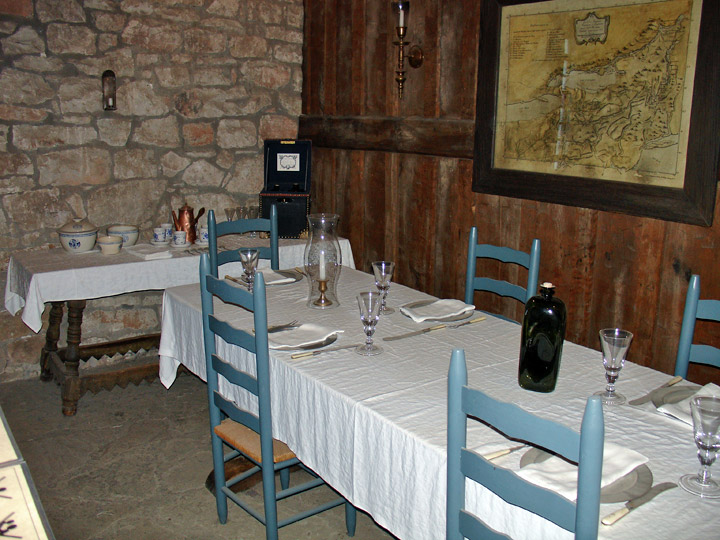 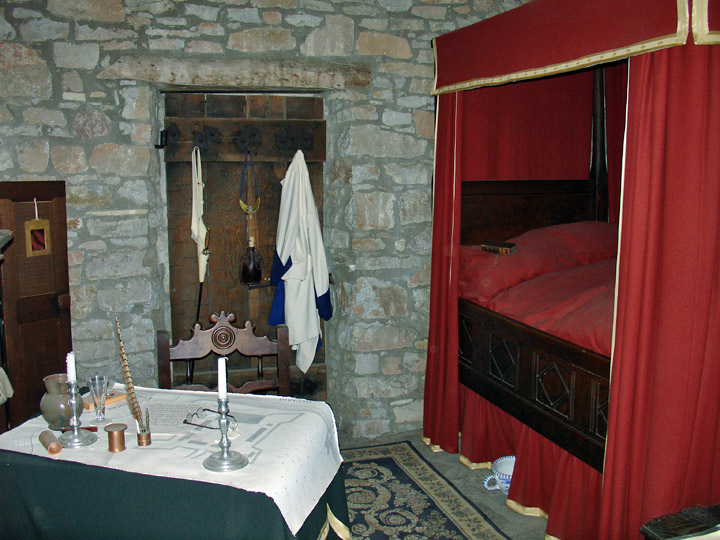 More comfortable officers' apartments  line the lake side of this floor. 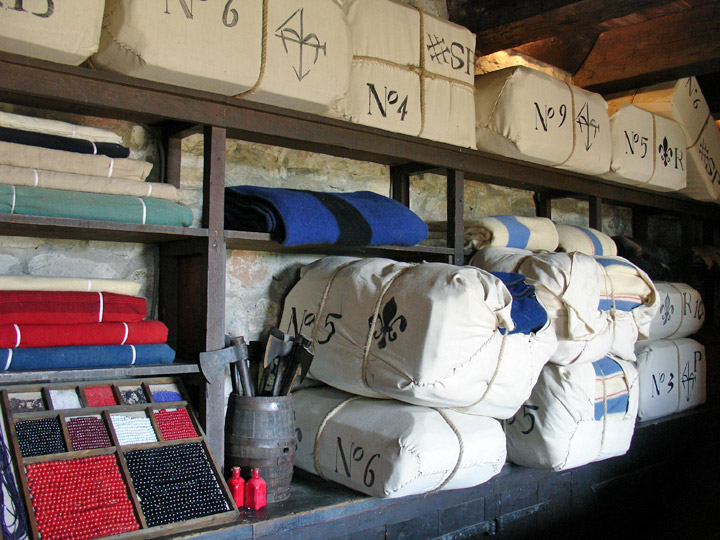 One of the most important parts of the ground floor was the Trade Room. During the French regime, Fort Niagara was a trading post as well as a military fortification. Indians came here in great numbers to exchange furs for manufactured goods. 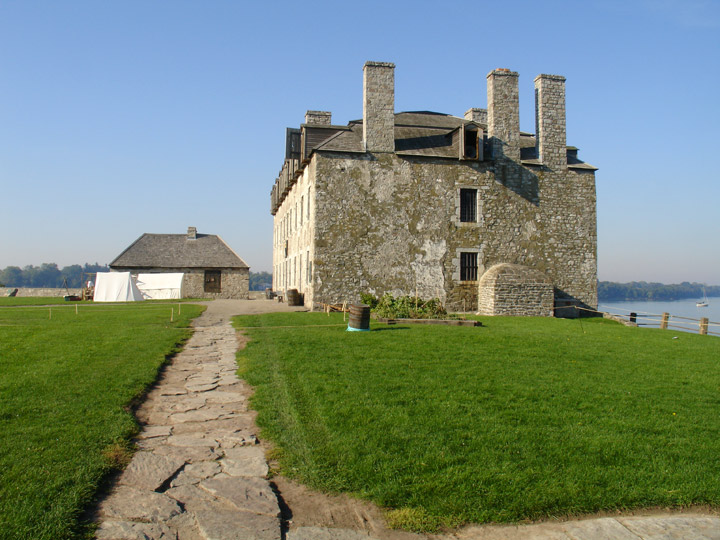 The wooden roof of the Castle was removed during the War of 1812. Earthen compartments were constructed atop the the building with cannon placed on the attic floor to bombard Fort George. Here, in the midst of a furious cannonade on November 21, 1812, a soldier's wife. Betsy Doyle (usually remembered today as "Fanny" Doyle) helped load a cannon and gained fame as a heroine of the War of 1812. 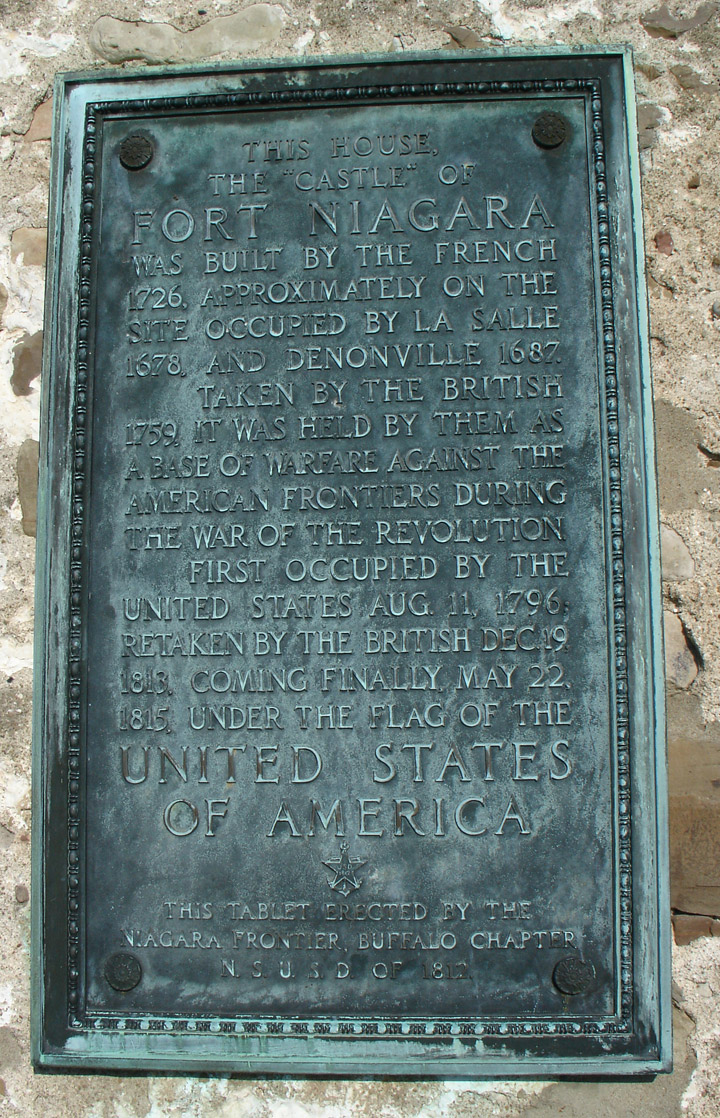 The Castle was repaired and restored between 1926 and 1933. The layout and details of the building today generally conform to its 1727 arrangement. Mid-18th century furnishings were reproduced in an effort to make the Castle appear substantially as it did during the French occupation. 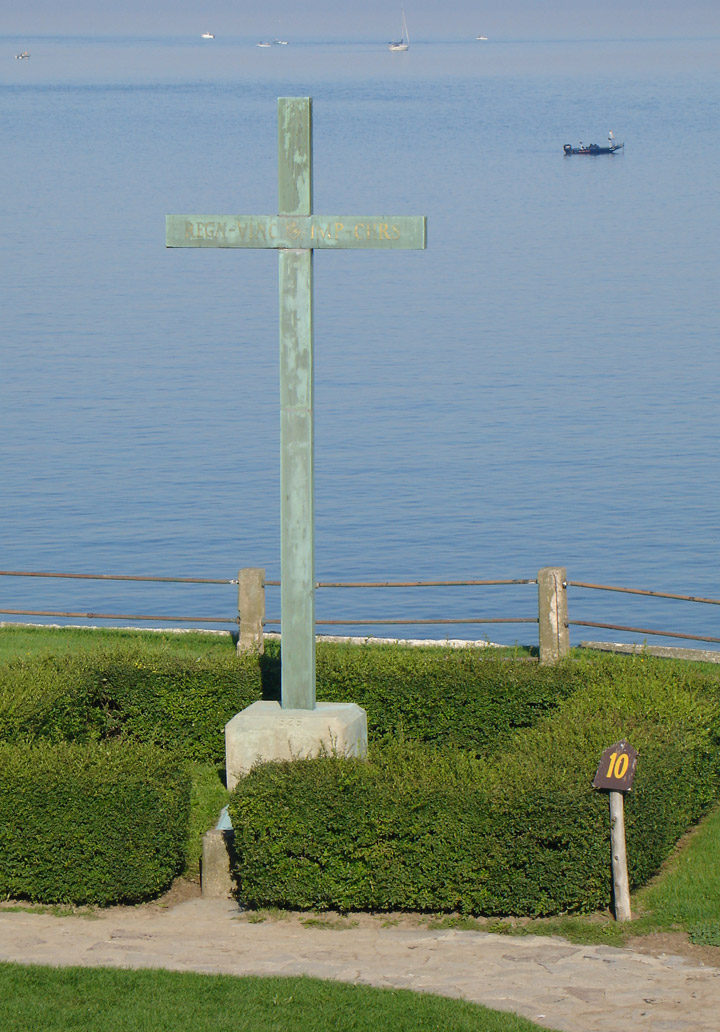 Dedicated to the ill-fated French soldiers of Fort Denonville, this bronze cross was erected by the Knights of Columbus in 1926. During the terrible winter of 1687-88 disease and starvation reduced the Fort's garrison of 100 men to only 12 survivors. The present monument commemorates a wooden cross under which Father Pierre Millet, a French Jesuit priest, celebrated a Mass of thanksgiving for the soldiers' survival.