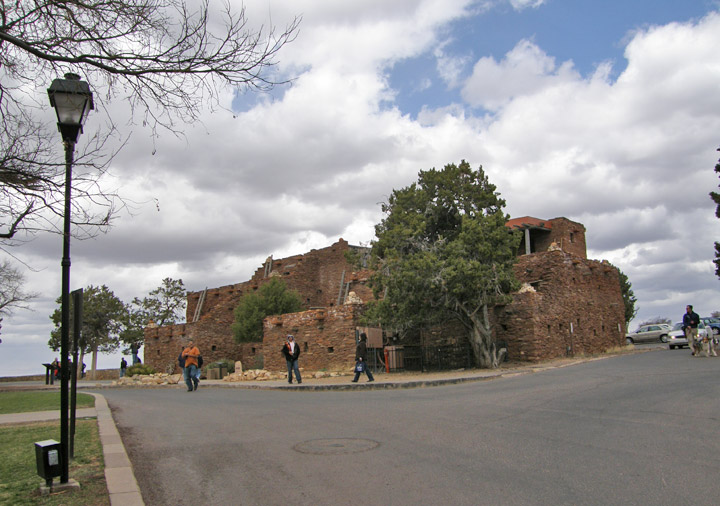 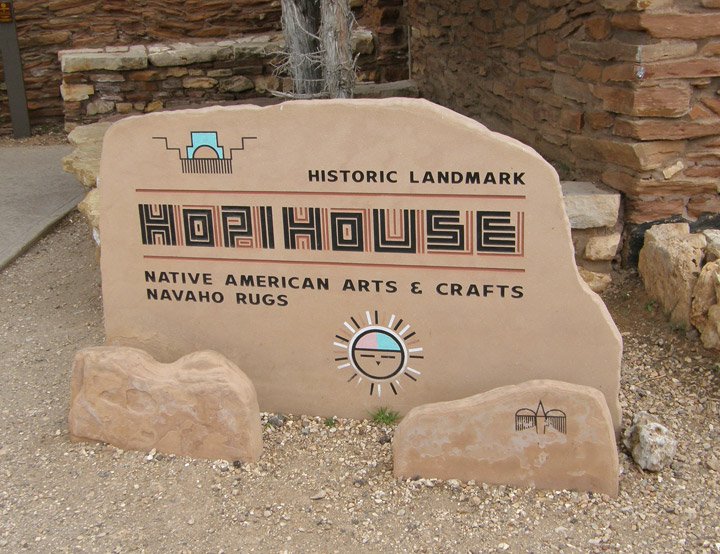 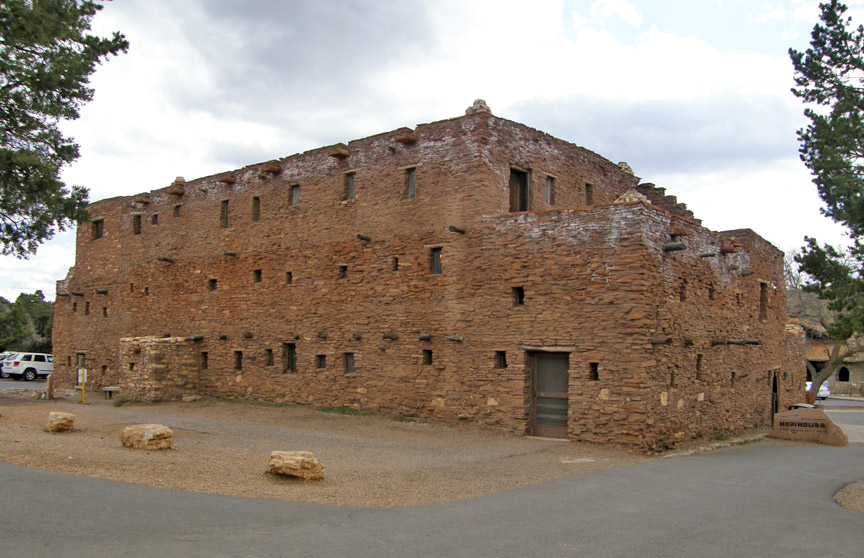 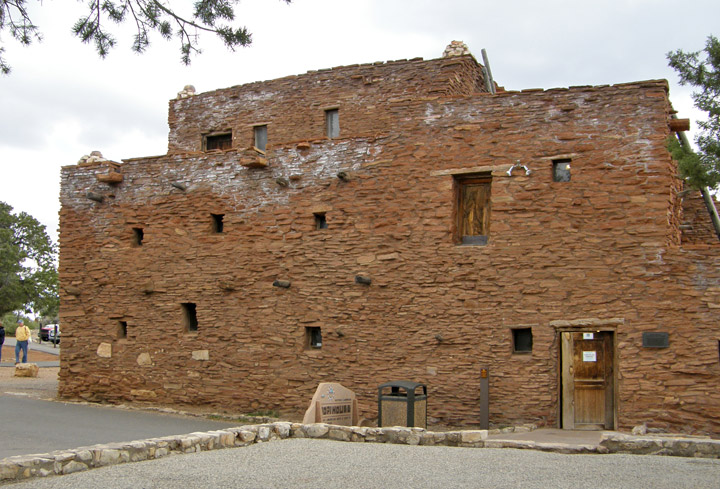 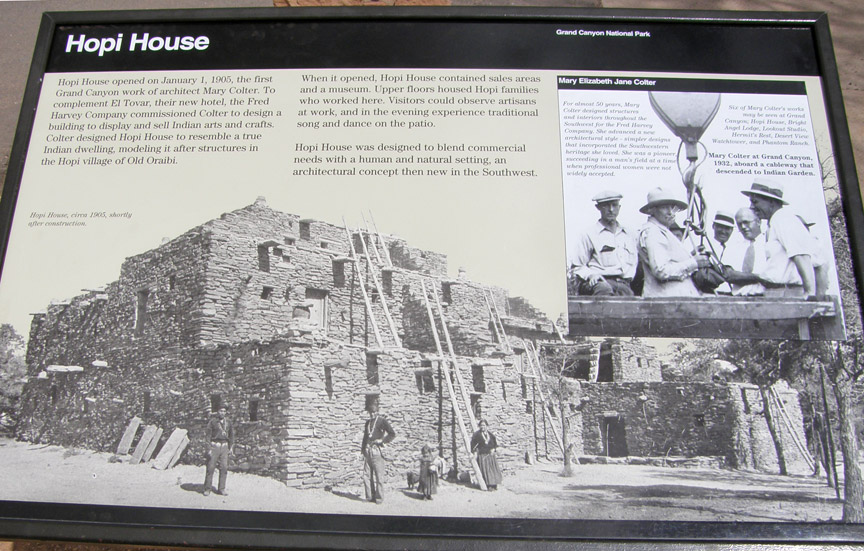 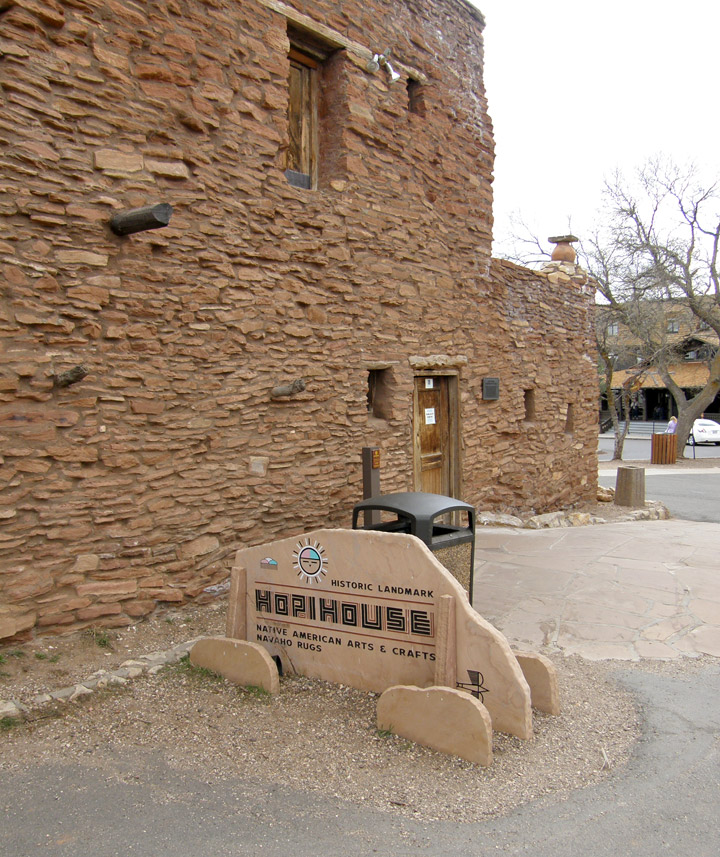 It is one of five buildings at the Grand Canyon that were designed by architect Mary Colter, along with Bright Angel Lodge, Hermit's Rest, Lookout Studio, and Desert View Watchtower. 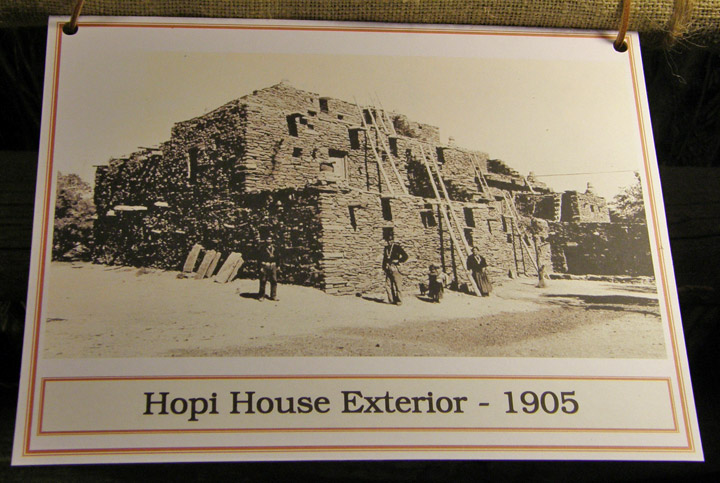 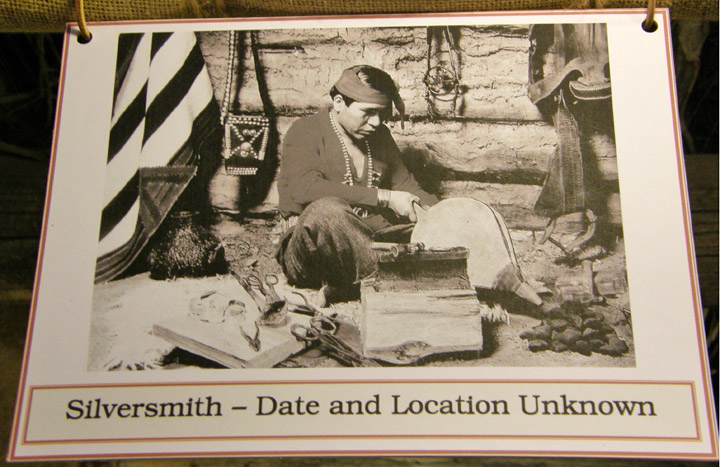 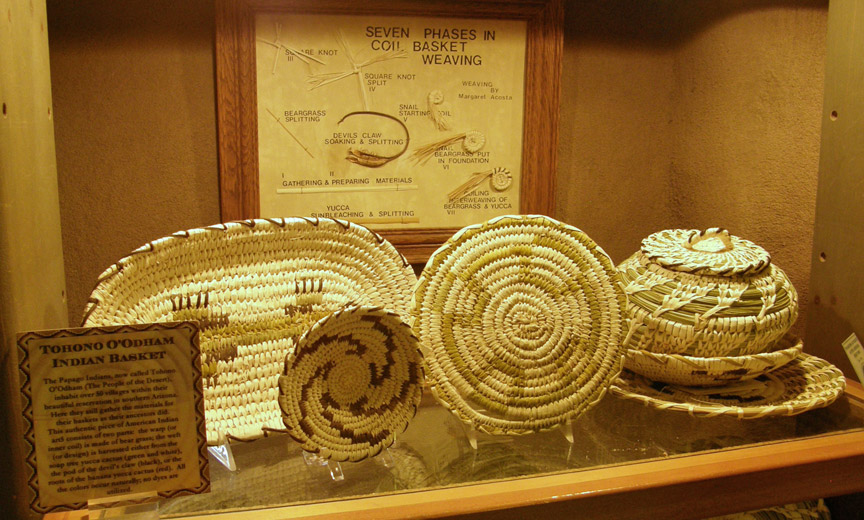 baskets from the Tohono O'Odham 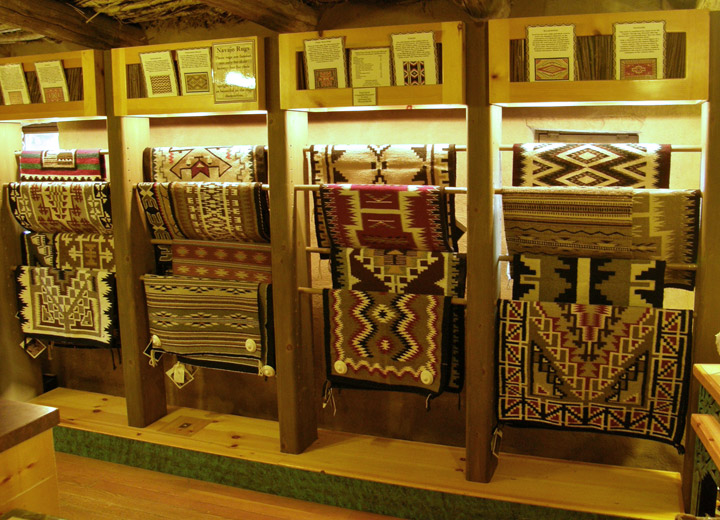 rugs from the Navajo 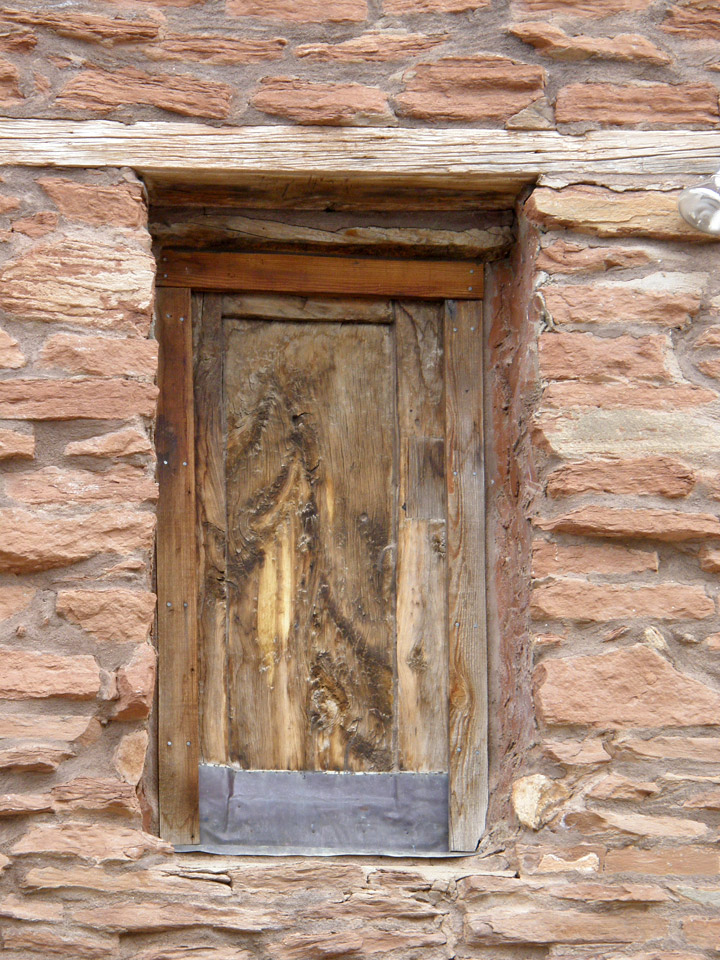 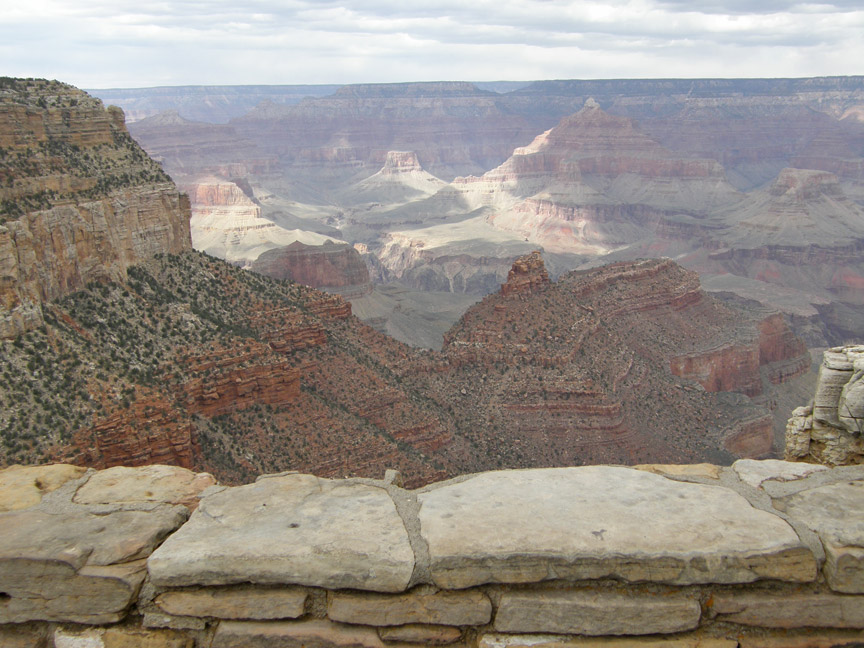 View of the Grand Canyon from the Hopi House 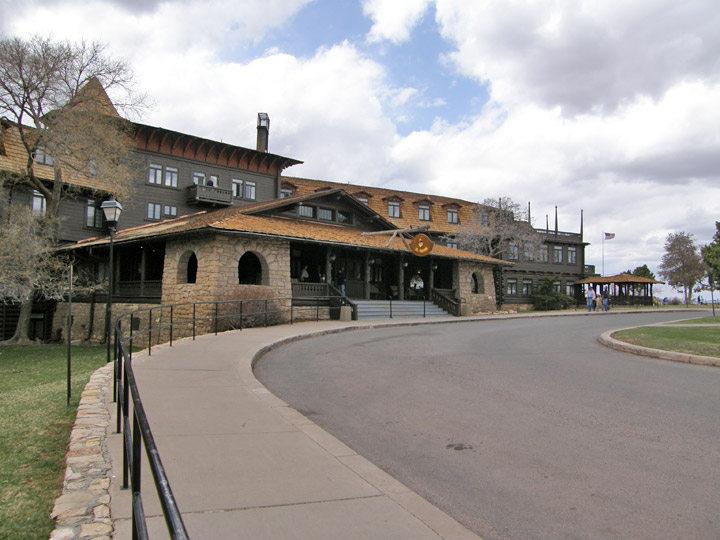 As a child Mary Colter traveled with her family through frontier Minnesota, Colorado and Texas in the years after the American Civil War. After her father died in 1886 Colter attended the California School of Design in San Francisco. In 1901, the Fred Harvey Company (of the famous Harvey Houses) offered her the job of decorating the Alvarado Hotel in Albuquerque. Colter began working full-time for the company in 1910, moving from interior designer to architect. 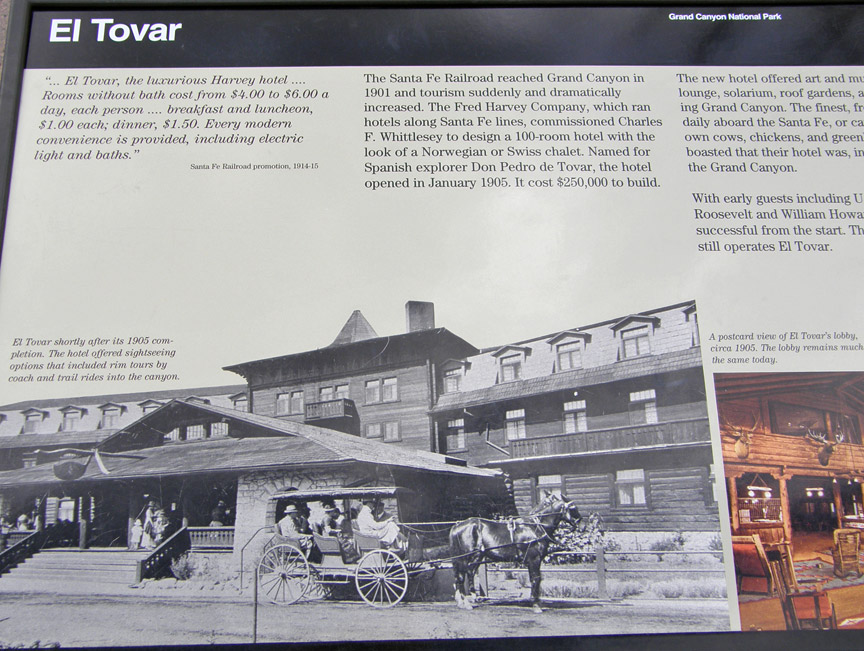 For the next thirty years, working as one of few female architects and in rugged conditions, Colter completed 21 projects for Fred Harvey. She created a series of landmark hotels and commercial lodges through the southwest, including the La Posada, the 1922 Phantom Ranch buildings at the bottom of the Grand Canyon, and five structures on the south rim of the Grand Canyon: the Hopi House (1905), Hermit's Rest (1914), the observatory Lookout Studio (1914), the 70-foot Desert View Watchtower (1932) with its hidden steel structure, and the Bright Angel Lodge (1935); Colter decorated, but did not design, the El Tovar Hotel. 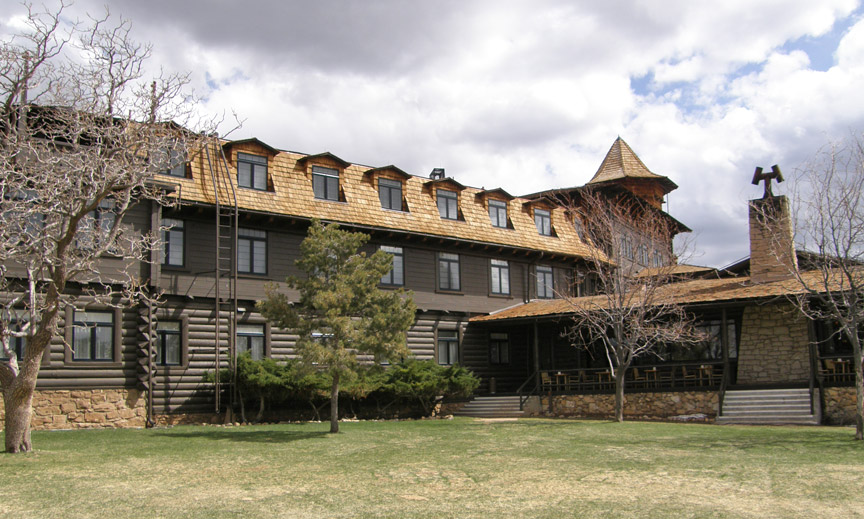 dining area on the right

Her employer Fred Harvey conquered the west along the Atchison, Topeka and Santa Fe Railway through strategic use of pretty girls in high-necked collars, tourism, and souvenirs. He had anthropologists on staff to locate the most likely native American art forms and artifacts like pottery, jewelry, and leatherwork. He had merchandisers on staff to redesign those artifacts into goods. And he had Mary Colter on staff to produce vernacular commercial architecture in strategic locations, based on some concern for authenticity, floor plans calculated for good user experience and commercial function, and a playful sense of dramatic theme inside and out. 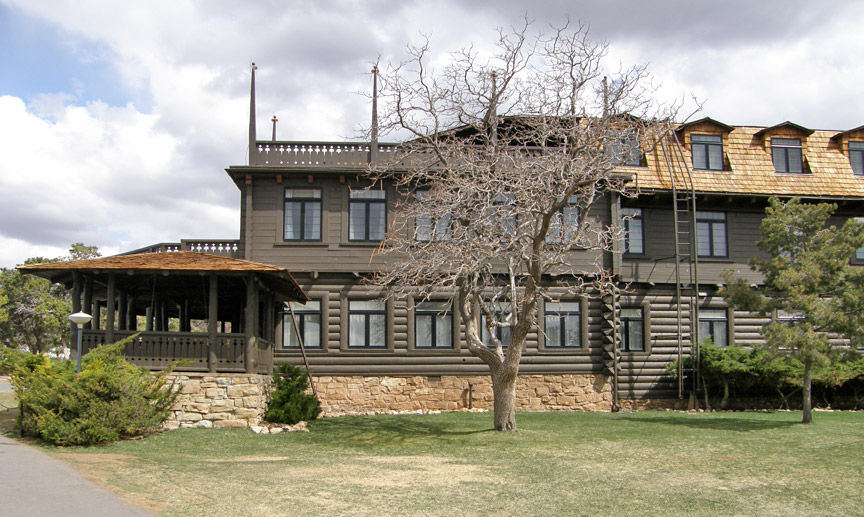 A chain-smoking perfectionist, she cared about backstory and attractive features. Colter conceived Hermit's Rest as a sort of folly, as if it had been wired together by a reclusive mountain man, and a recent cleaning has unfortunately eliminated the artificial age-effects from the Hopi House. The Watchtower is the product of some travel and research, and she cared enough to prepare a written manual for guides. And she changed the name of Phantom Ranch (from Roosevelt Ranch) to capitalize on better mental images. 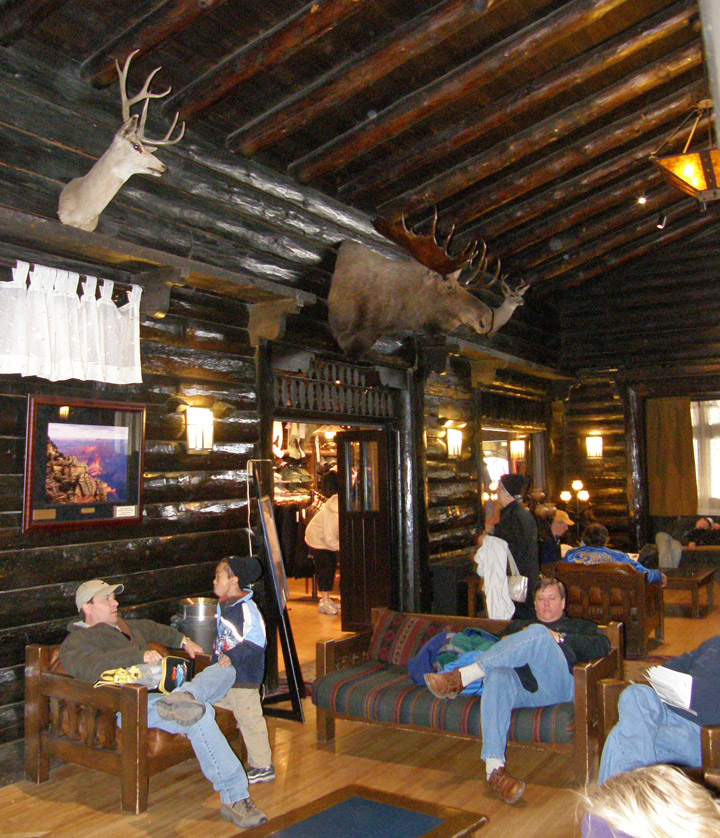 The Bright Angel became a de facto model for subsequent National Park Service and Civilian Conservation Corp structures in the following years, influencing the look and feel of an entire architectural genre some call National Park Service Rustic, and setting the precedent for using site materials and bold, large-scale design elements (the use of native fieldstone and rough-hewn wood at the bottom of the Grand Canyon was deemed the only practical thing to do). The Bright Angel Lodge also has a remarkable "geological fireplace" in the lodge's History Room, with rocks arranged floor to ceiling in the same order as the geologic strata in the canyon walls. 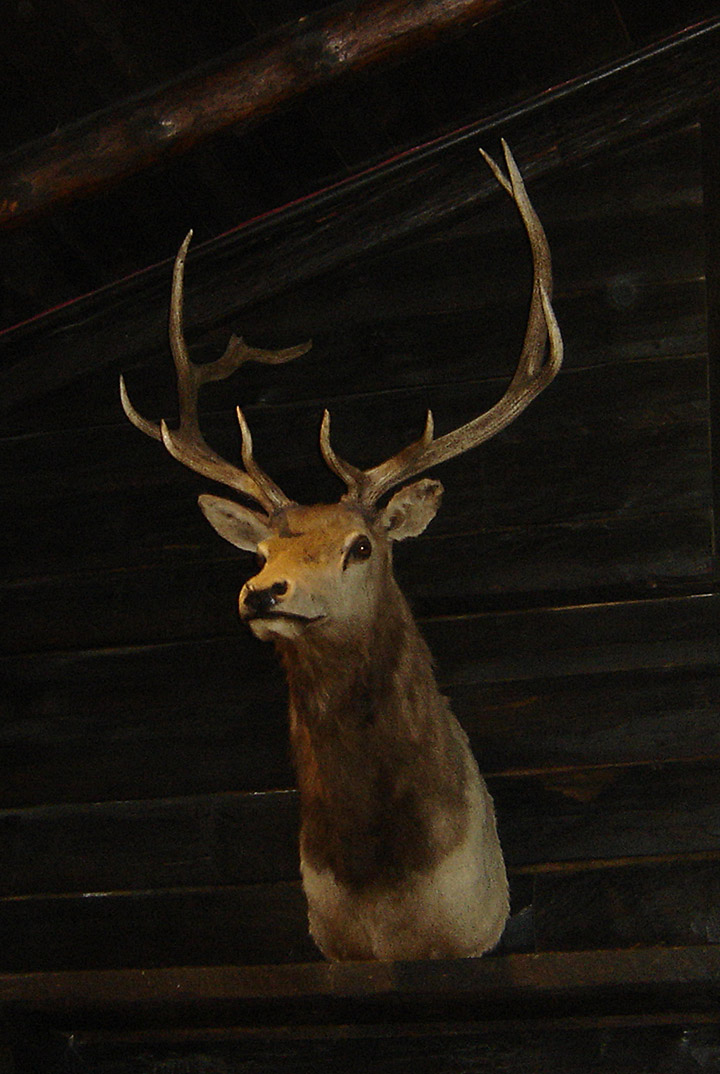 Colter's masterwork was probably the 1923 El Navajo in Gallup, New Mexico. Remarkable for its forward-looking blend of modern and native architecture and the incorporation of Navajo sand paintings, the hotel was razed shortly before Colter's death. Of all of her work, though, Colter considered the sprawling, hacienda-style La Posada Hotel (1929) in Winslow, Arizona, her masterpiece. She designed the entire resort from the building to its gardens, furniture, china--even the maids' uniforms. The Santa Fe railroad closed the hotel in 1957 and turned it into a drab 1960s office building. Fortunately, the hotel has recently been restored to its original grandeur. 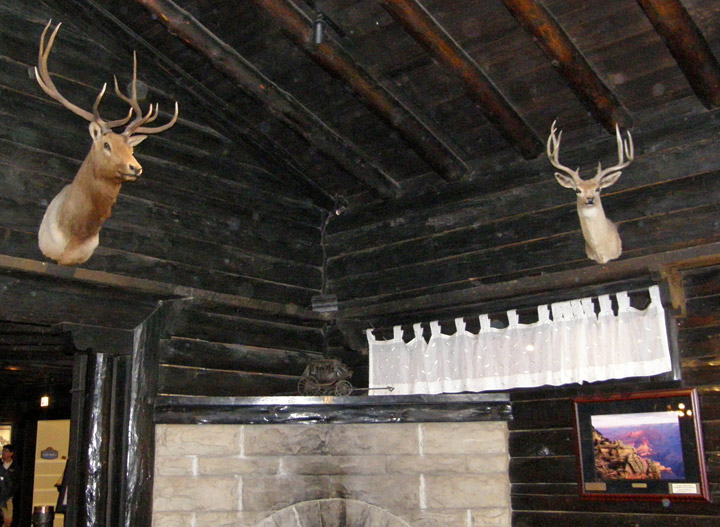 over the Hotel fireplace

Late in her career Colter designed the exuberant station cafe and a surprisingly sleek, modern cocktail lounge at Union Station in Los Angeles, now padlocked except for occasional movie shoots and LA Conservancy tours. Colter retired to Santa Fe, New Mexico in 1948 and donated her collection of artifacts to Mesa Verde National Park. 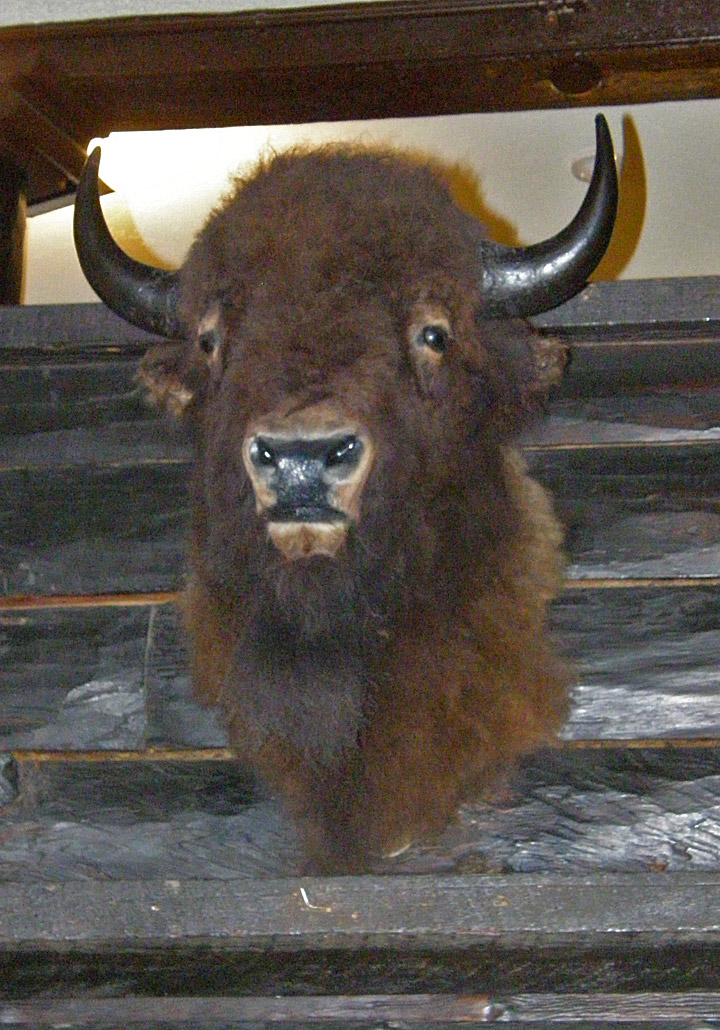 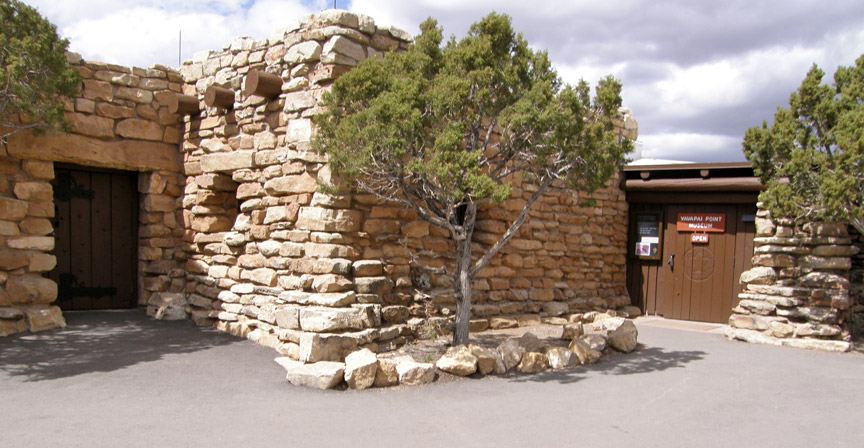 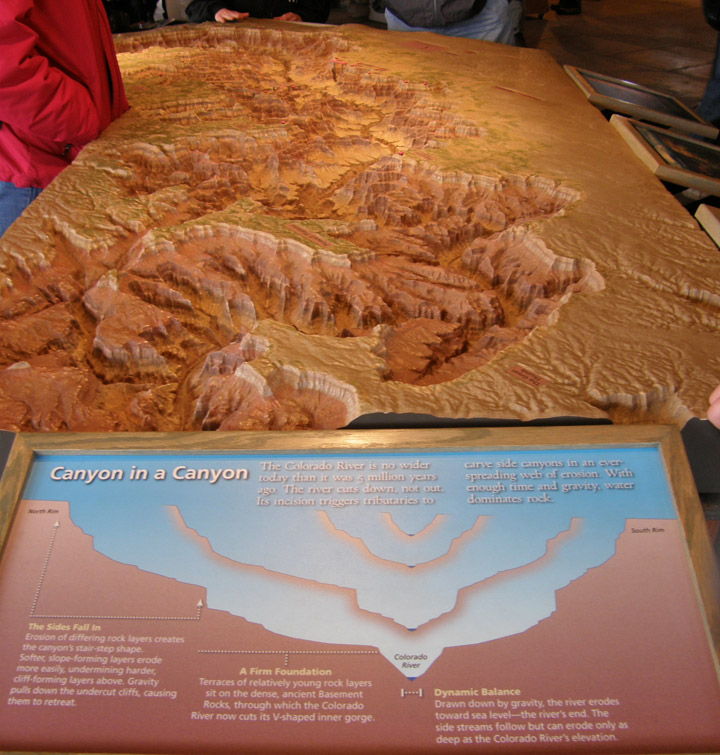 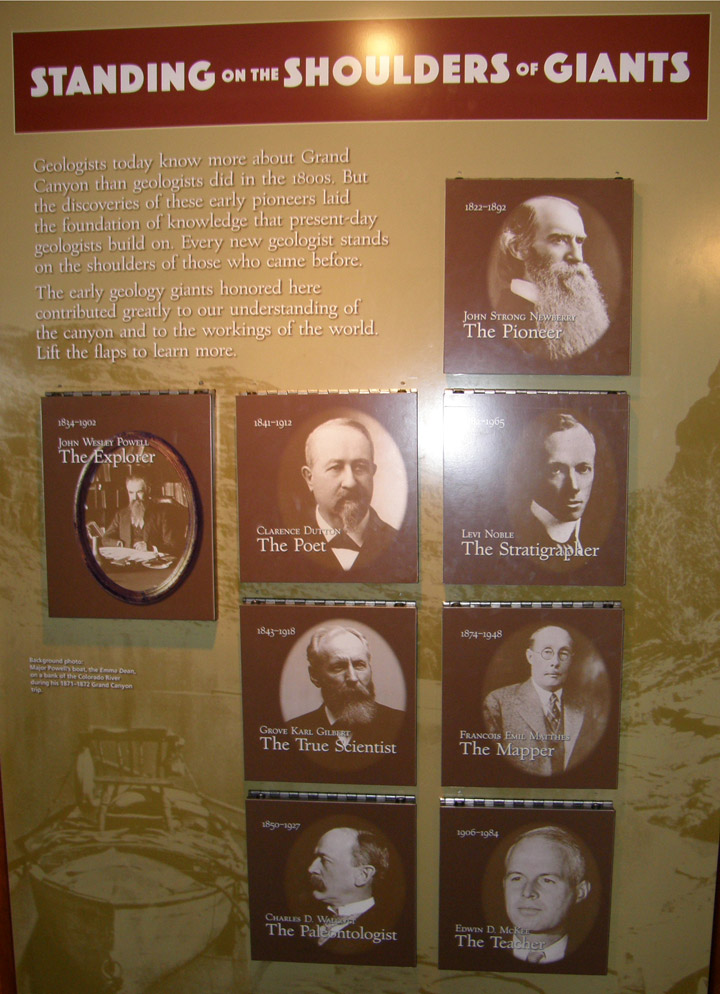 important men of the Grand Canyon

Lookout Studio was constructed by the Santa Fe Railway in 1914 and was established as a photography studio to compete with Kolb Studio. It is one of five buildings at the Grand Canyon that were designed by architect Mary Colter, along with Bright Angel Lodge, Hermit's Rest, Hopi House, and Desert View Watchtower. Lookout Studio employs her signature rustic style of using jagged native rocks to imitate indigenous structures of the region and to blend in with the environment. 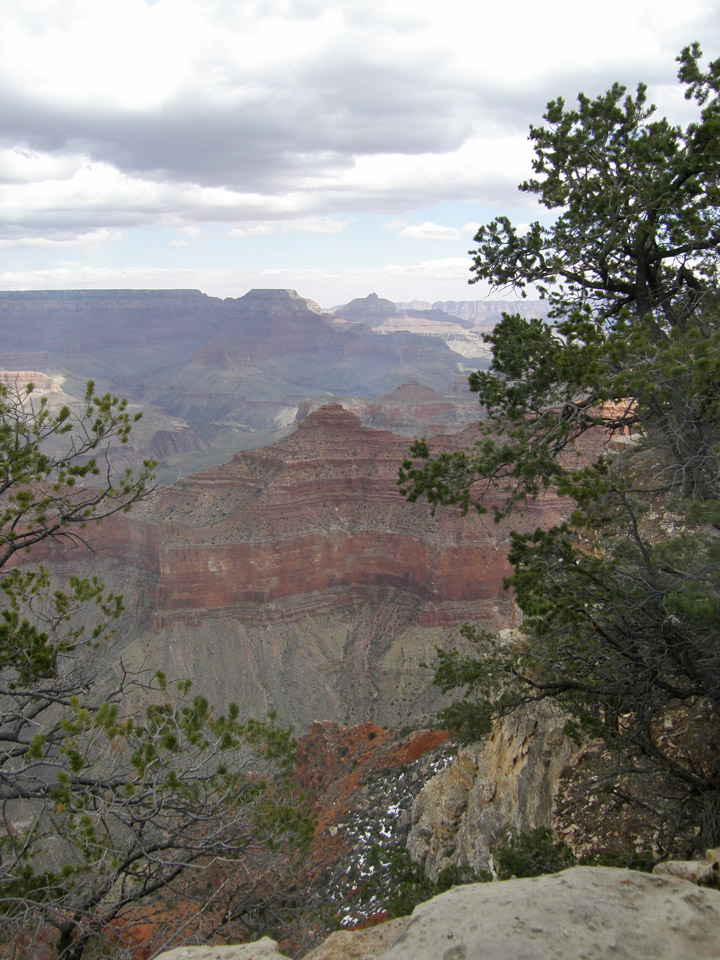