The historic center of the city developed in a broad valley on the banks and surrounding hills of the Vltava River. Many bridges link the two parts of the city. The most famous of these is the Charles Bridge, commissioned in the late 14th century by Holy Roman Emperor Charles IV, completed in the early 15th century and later embellished with statues of saints.

Old Town, founded in the 13th century, and New Town, which developed in the 14th century, lie on the eastern bank of the river. Old Town contains many important architectural and artistic monuments, several of them situated on Old Town Square. A statue of John Huss (Jan Hus), the Bohemian religious reformer who instigated the Protestant Reformation in the 15th century, dominates the square.

Other attractions are the 14th-century Týn Church, a center of the Hussite movement, and the astronomical clock, or Orloj, of Old Town Hall (Staromìstská Radnice), which is adorned with statues of the 12 apostles that rotate each hour.

Old Jewish cemetry. Faunded in the 15th century
It is possible to find graves of Rabbi Jehuda Löw - the creator of legendary Golem (1609)

Old Town also encompasses Josephov, the city’s Jewish quarter. Dating from the 10th century, Josephov contains the Old-New Synagogue and the Old Jewish Cemetery, which is the oldest in Europe. Many of the buildings of Charles University are in Old Town, as are several concert halls and museums.

New Town, which is adjacent to Old Town on the eastern bank of the Vltava, has remained an industrial and commercial center over the centuries. Many of the area’s buildings date from the 18th century. There are also numerous examples of art nouveau architecture.

The famous Wenceslas Square, or Václavské námìstí, is presided over by a statue of Saint Wenceslas, the 10th-century nobleman celebrated in the Christmas carol "Good King Wenceslas." The National Museum, built between 1885 and 1890, lies at one end of the square. The National Theater, completed in 1881, is located on Národní tøida, or National Street. Both buildings were constructed during the period of resurgent Czech culture and nationalism in the 19th century.

The Hradèany, or Castle, district is on the western side of the Vltava and dominates the city. Situated on a hill, Hradèany (Prague Castle) includes several historical buildings and is Prague’s most visible symbol. Formerly the residence of the kings of Bohemia, Hradèany now houses the offices and official residence of the president of the Czech Republic. Zlatá ulièka, or Golden Street, is just inside one of the castle’s walls and includes the tiny shops and small homes of the artisans who once served the castle’s occupants.

The Lesser Quarter, or Malá Strana, located in the area between the castle hill and the river, contains many of the Baroque palaces that lend distinction to Prague.

Photos of the Lesser Quarter

The Old Town Hall
the window dates from after 1526 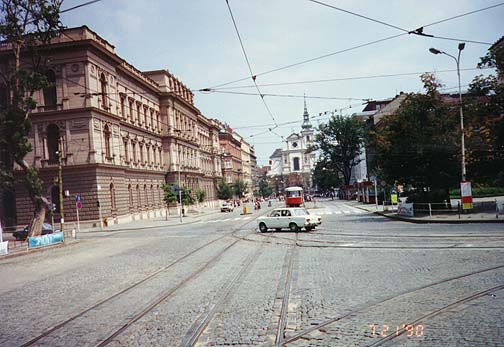