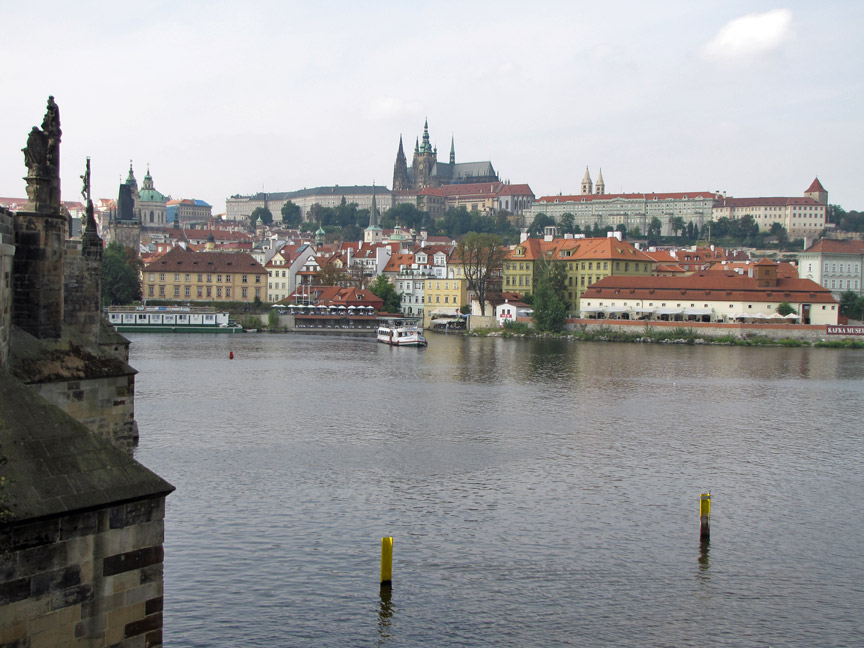 looking across the Moldau river to Prague Castle 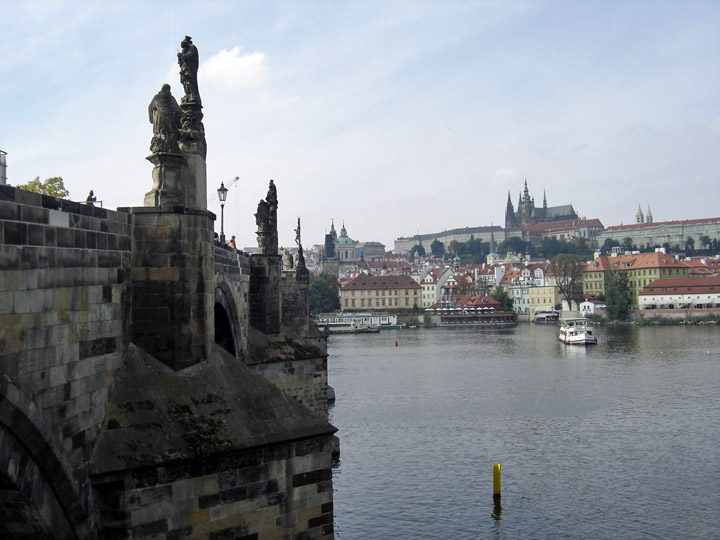 Charles Bridge is a famous historical bridge that crosses the Vltava river in Prague, Czech Republic.  Its construction started in 1357 under the auspices of King Charles IV, and finished in the beginning of 15th century. As the only means of crossing the river Vltava (Moldau), the Charles Bridge used to be the most important connection between the Old Town, Prague Castle and adjacent areas until 1841. Also this 'solid-land' connection made Prague important as a trade route between east and west Europe. The bridge was originally called the Stone Bridge (Kamenný most) or the Prague Bridge (Pražský most) but has been the "Charles Bridge" since 1870. 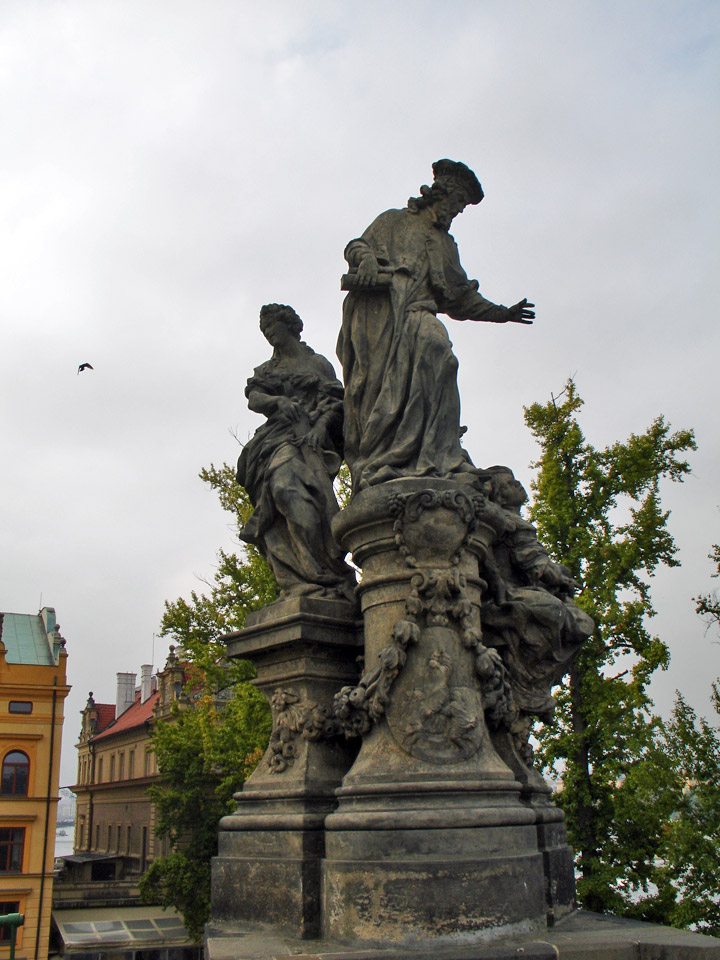 The bridge is 516 meters long and nearly 10 meters wide, resting on 16 arches shielded by ice guards. It is protected by three bridge towers, two of them on the Lesser Quarter side and the third one on the Old Town side. The Old Town bridge tower is often considered to be one of the most astonishing civil gothic-style buildings in the world. The bridge is decorated by a continuous alley of 30 statues and statuaries, most of them baroque-style, erected around 1700. 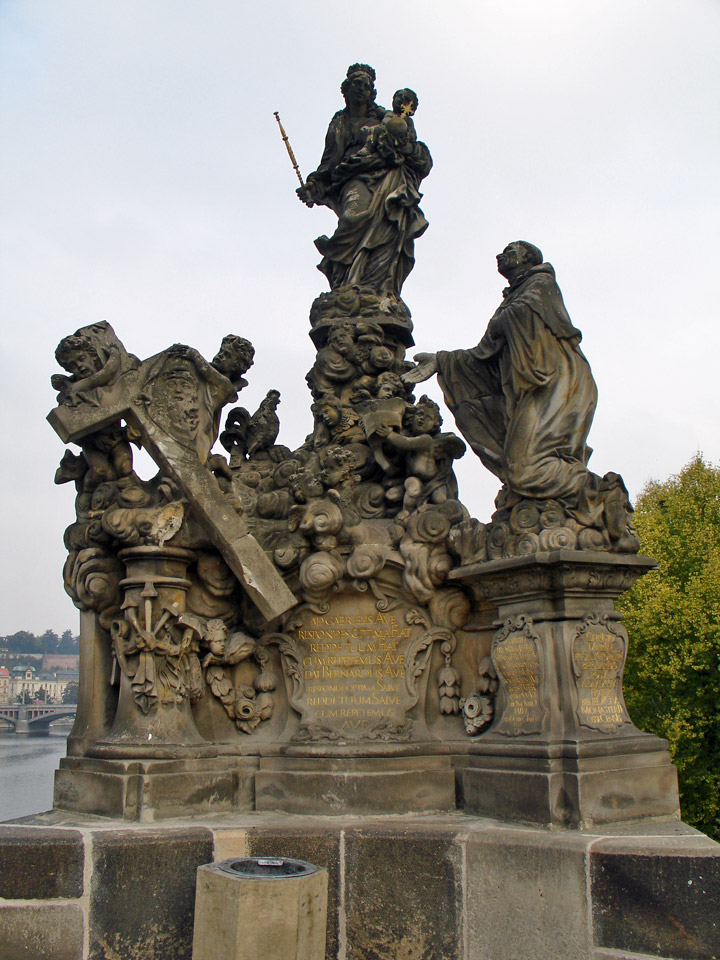 During the night Charles Bridge is a quiet place. But during the day it changes its face into a very busy place, with painters, owners of kiosks and other traders alongside numerous tourists crossing the bridge. 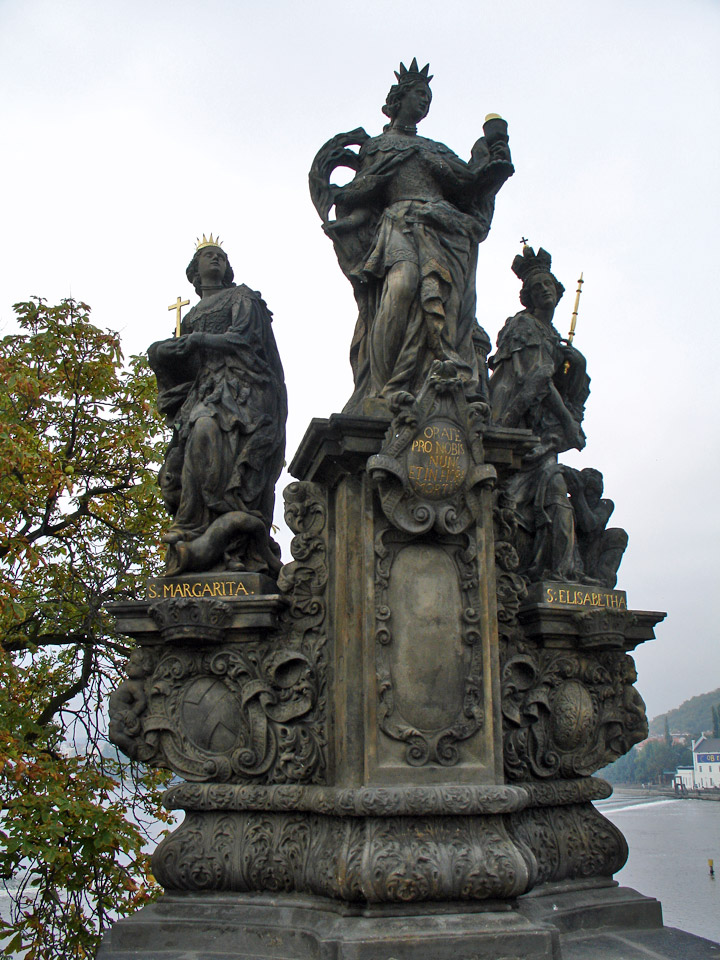 The need for building a new bridge emerged after the old romanesque Judith Bridge (Juditin most, built around 1170 and named after king Vladislav I's wife Judith) was destroyed by a flood in 1342. The building began in 1357, was supervised by Peter Parler and led by a "magister pontis", Jan Ottl. 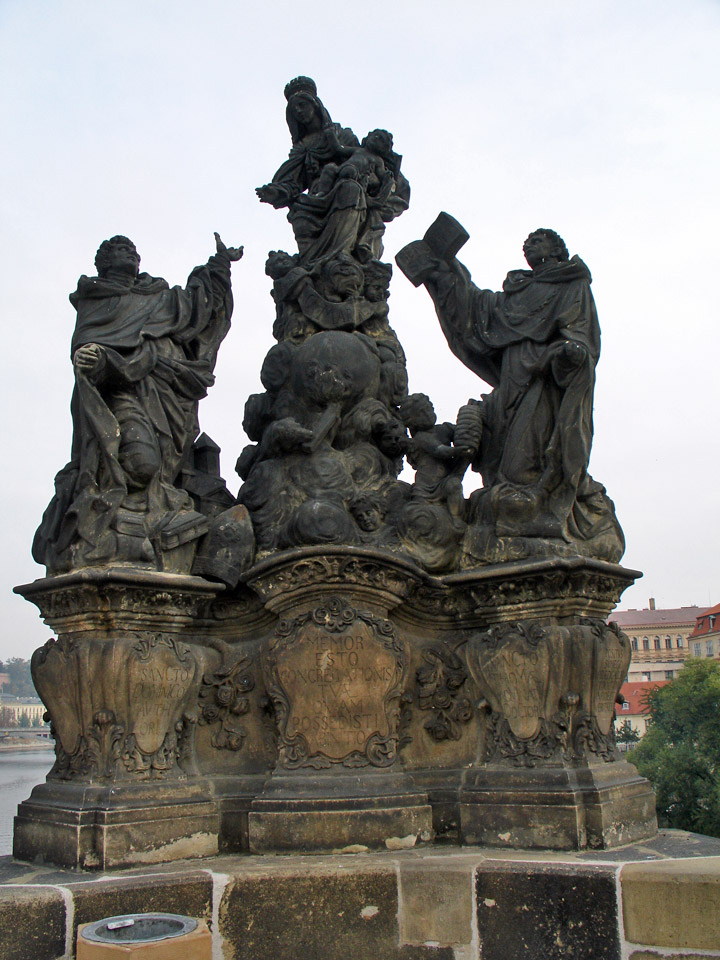 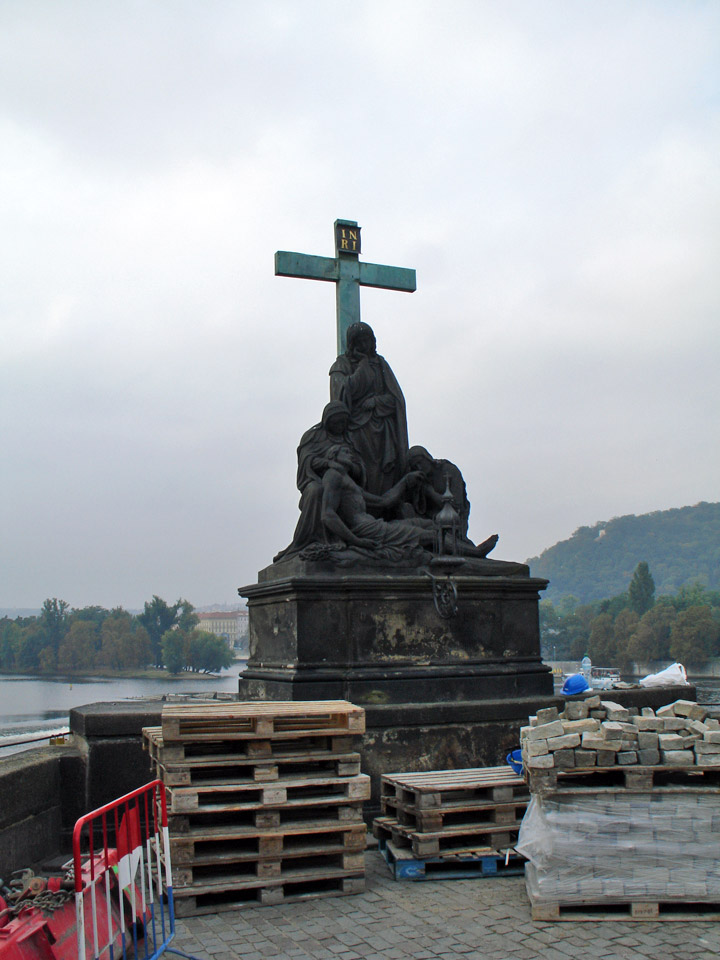 The bridge was built from Bohemian sandstone. There is a legend saying that eggs were used to enrich the mortar used to bind the stone blocks to make it harder. Although the saying cannot be verified, modern laboratory tests have indeed proved inorganic and organic ingredients to the mortar. Later, the use of eggs in Charles Bridge mortar was confirmed. The construction of Charles Bridge took place until the beginning of 15th century. To sustain the bridge, tolls were taken, first by the religious order of the Knights of the Cross with the Red Star, who had their mother-house nearby, then by the Old Town municipality (until 1815). 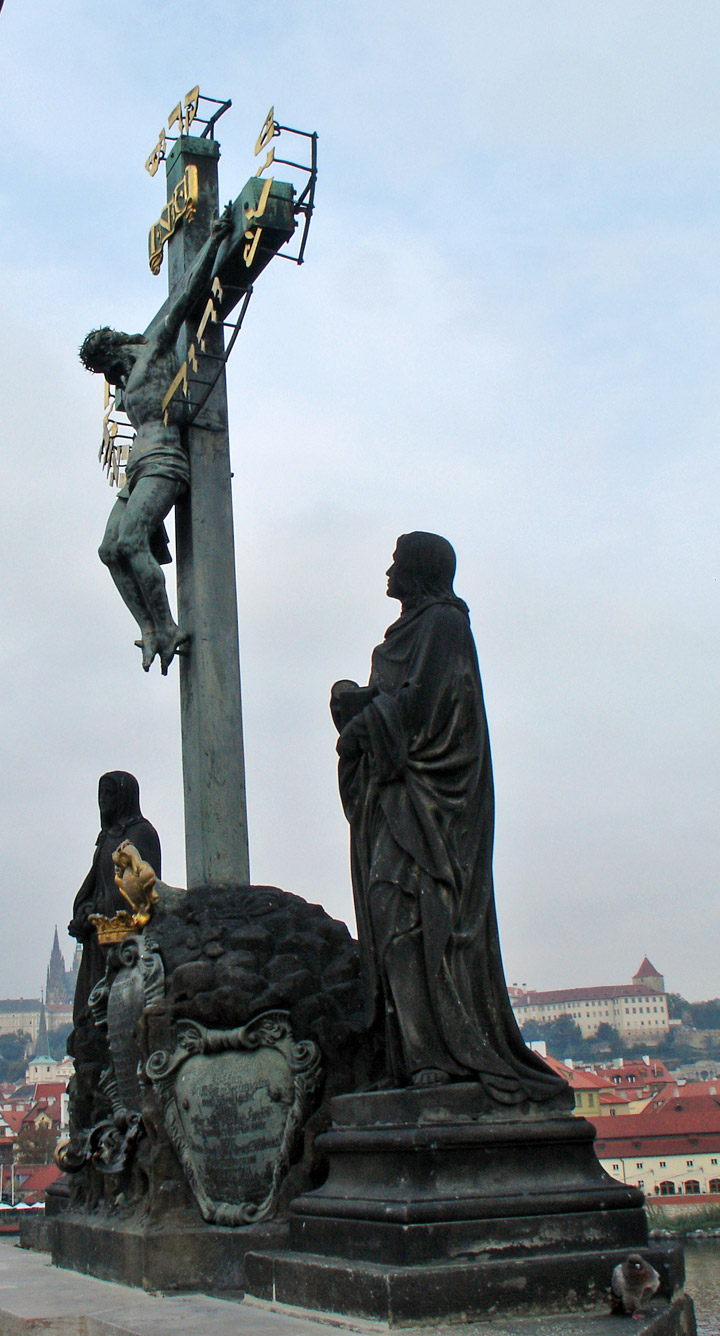 Throughout its history, Charles Bridge suffered several havocs and witnessed many historic events. A flood in 1432 damaged three pillars. In 1496 the third arch (counting from the Old Town side) broke down after one of the pillars lowered, being undermined by the water (repairs were finished in 1503). A year after the Battle of White Mountain, when the 27 leaders of the anti-Habsburg revolt were executed on 21 June 1621, the Old Town bridge tower served as a deterrent display of the cut-off heads of the victims to stop Czechs from further resistance. During the end of the Thirty Years' War in 1648, the Swedes occupied the west bank of Vltava and as they tried to advance into the Old Town, the heaviest fights spread out right on the bridge. During the fighting, they severely damaged one side of the Old Town bridge tower (the side facing the river) and the remnants of almost all gothic decorations had to be removed from it afterward. During the late 17th and early 18th centuries the bridge gained its typical appearance when an alley of baroque statues was installed on the pillars. During a great flood in 1784, five pillars were severely damaged and although the arches didn't break down, the traffic on the bridge had to be greatly restricted for some time. 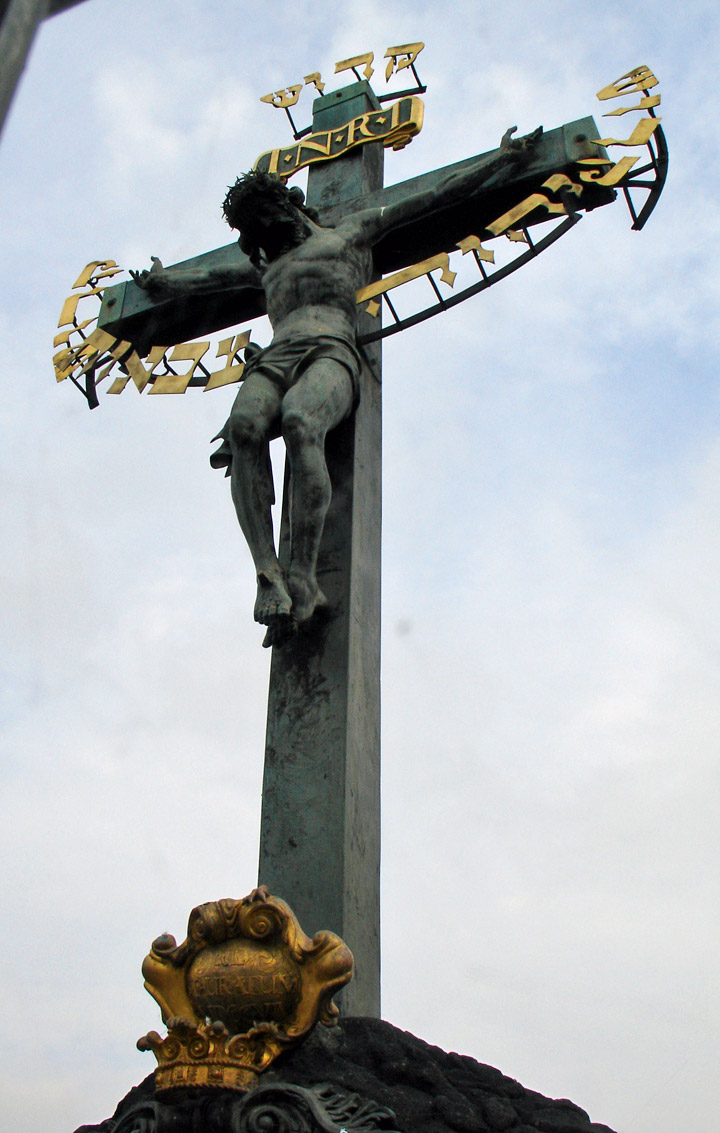 For 200 years, the wooden crucifix stood alone on the bridge.
The gilded Christ dates from 1629
the Hebrew words "Holy, Holy, Holy Lord" were paid for
by a Jew as punishment for blasphemy

The original stairway to Kampa Island was replaced by a new one in 1844. The next year, another great flood threatened the bridge, but the bridge escaped major damage. In 1848, during the revolution days, the bridge escaped unharmed from the cannonade, but some of the statues were damaged. In 1866, the pseudo-gothic gas (later changed to electric) lights were erected on the balustrade. In the 1870s, the first regular public transport (omnibus) line went over the bridge (officially called "Charles Bridge" after 1870), later replaced by a horse-tram. The bridge towers underwent a thorough reconstruction between 1874 and 1883. 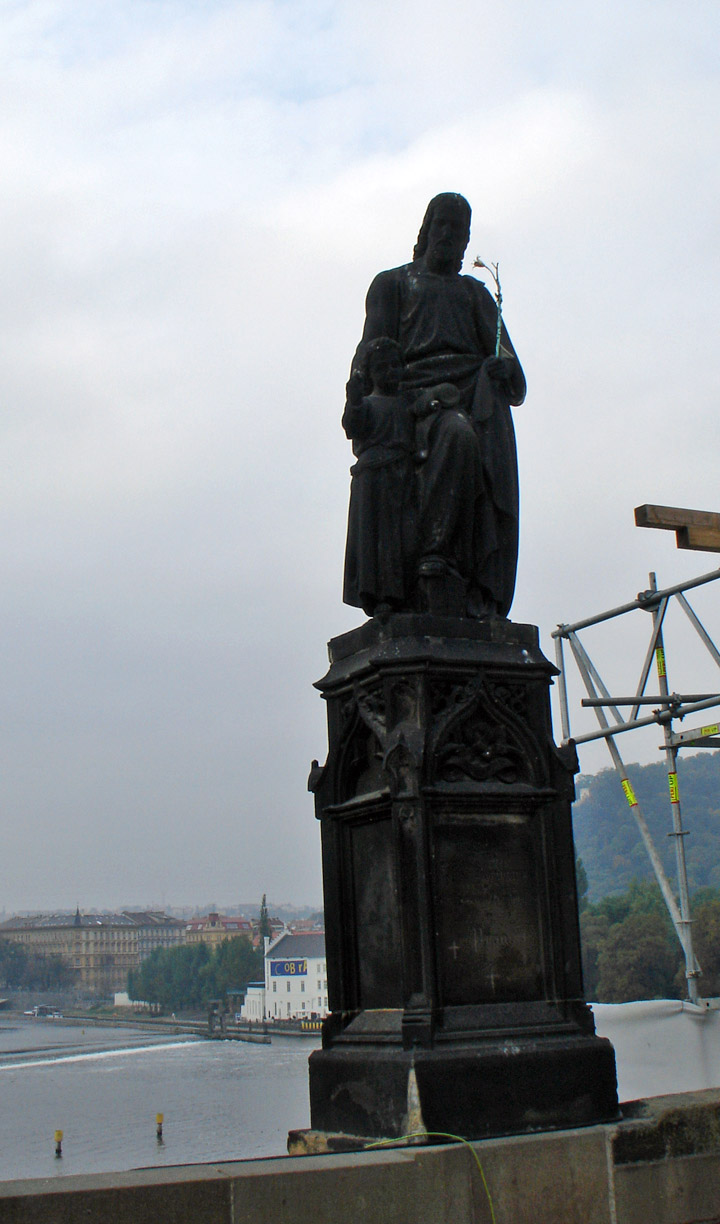 On 2-5 September 1890, another disastrous flood struck Prague and severely damaged the Charles Bridge. Thousands of rafts, logs and other floating material that escaped from places upstream gradually formed a huge barrier leaning against the bridge. Three arches were torn down from the great pressure and two pillars collapsed from being undermined by the water, while others were partly damaged. With the fifth pillar, two statues - St. Ignatius of Loyola and St. Xavier, both by Ferdinand Brokoff - also fell into the river (the former statue was replaced by a statuary of Saints Cyril and Methodius by Karel Dvořák, the latter was replaced by a replica of the original). Repair works lasted for two years (the bridge was reopened on 19 November 1892) and cost 665,000 crowns. 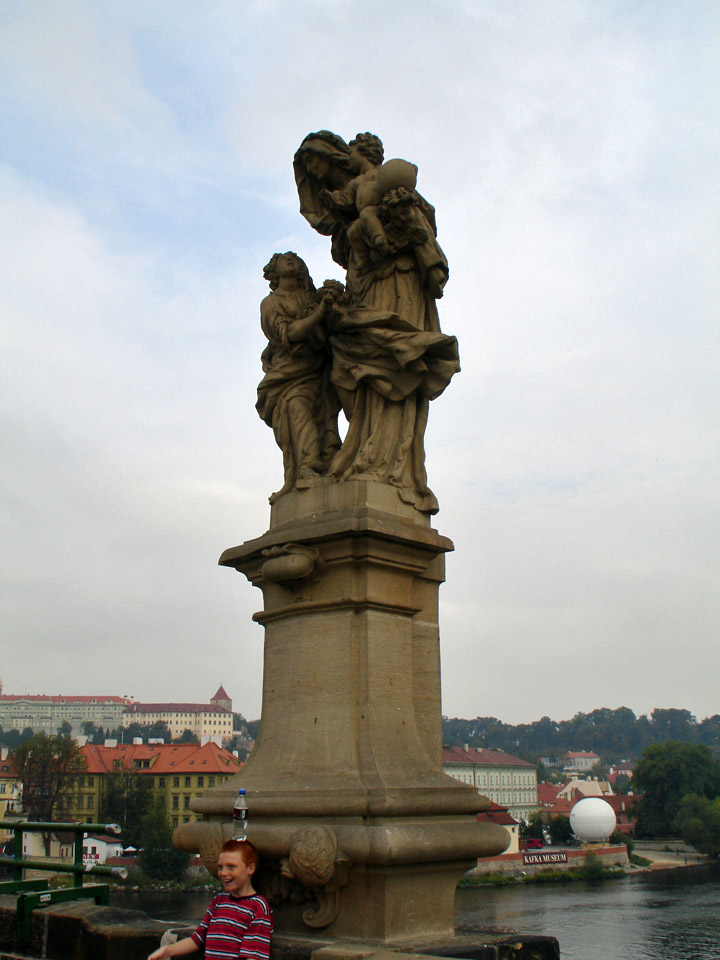 In the beginning of the 20th century, Charles Bridge saw a steep rise of heavy traffic. The 15 May 1905 was the last day of the horse-line on the bridge, as it was replaced with an electric tram until 1908 and with buses afterward. At the end of World War II, a barricade was built in the Old Town bridge tower gateway. A capital repair of the bridge took place between 1965 and 1978, based on a collaboration among various scientific and cultural institutes. The stability of the pillars was reassured, all broken stone blocks were replaced, the asphalt top was removed and all traffic has been excluded from the Charles Bridge since then, making it accessible by pedestrians only. The repair cost 50 million crowns. 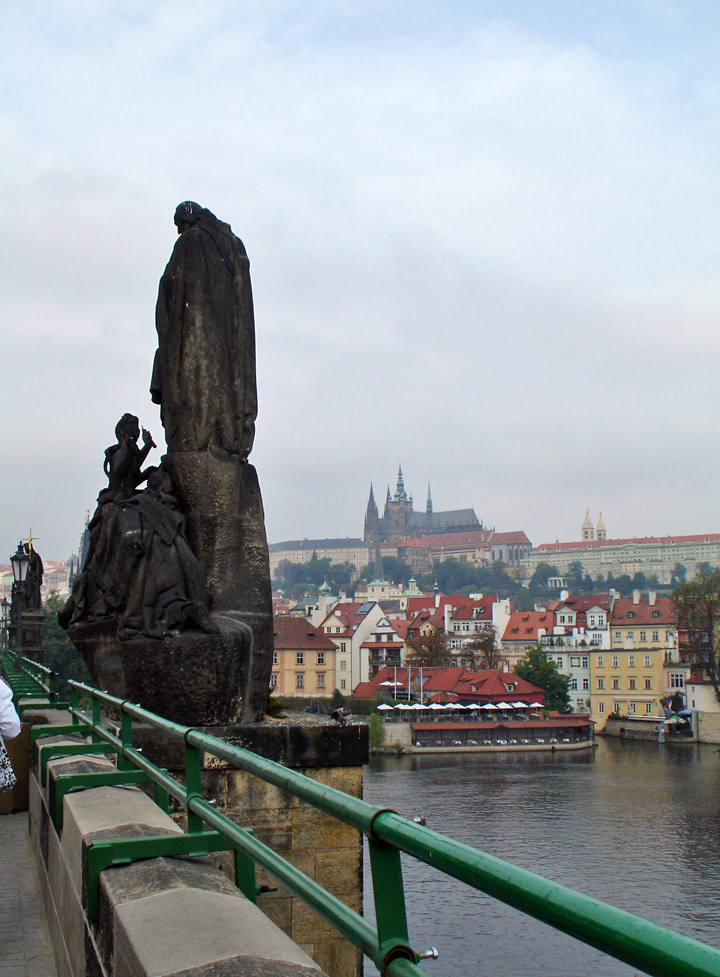 During the 1990s, some people started criticizing the previous reconstruction of the bridge and proposing a new one. As of the beginning of the new millennium, most of the experts appeared to agree that the previous reconstruction had not been flawless but disputed the need for further interference with the bridge. However, after the disastrous floods of 2002 (which itself caused only minor harm to the bridge), it was decided that repair and stabilization of the two pillars (number 8 and 9) on the Malá Strana side of the Bridge would happen. These are the only river pillars that have not been repaired after the 1890 floods. The floods intensified the voices of the supporters of an overall bridge reconstruction and, as of 2005, the current repair of the pillars is considered as the first phase of the reconstruction, which will concentrate especially on building a new hydroisolation system protecting the bridge. The whole reconstruction will be done gradually without needing to close the bridge and is scheduled for the period 2007–2010. 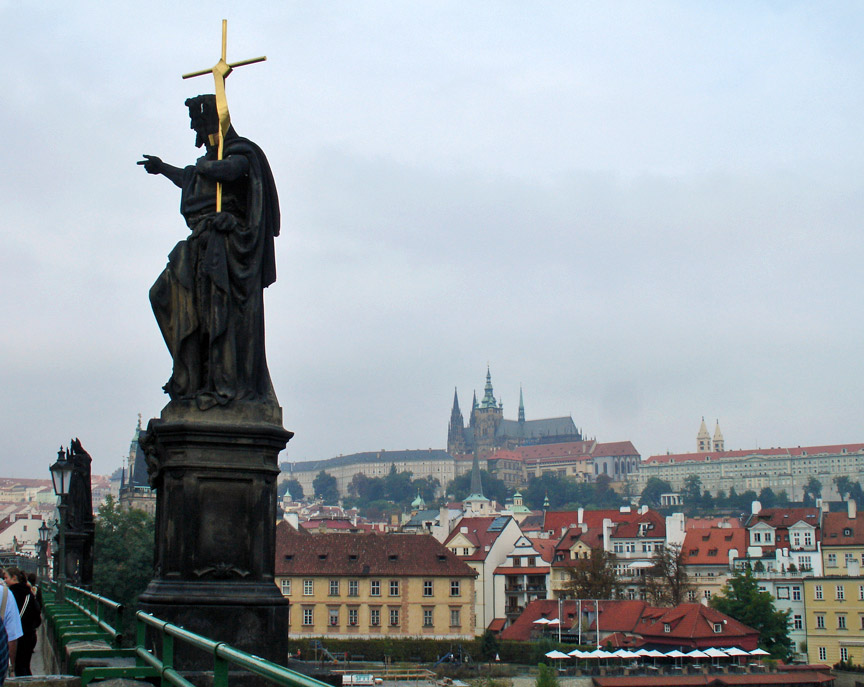 The statue of John of Nepomuk. On March 20, 1393 he was thrown into the river Vltava from the Charles Bridge at the behest of Wenceslaus, King of the Romans and King of Bohemia. 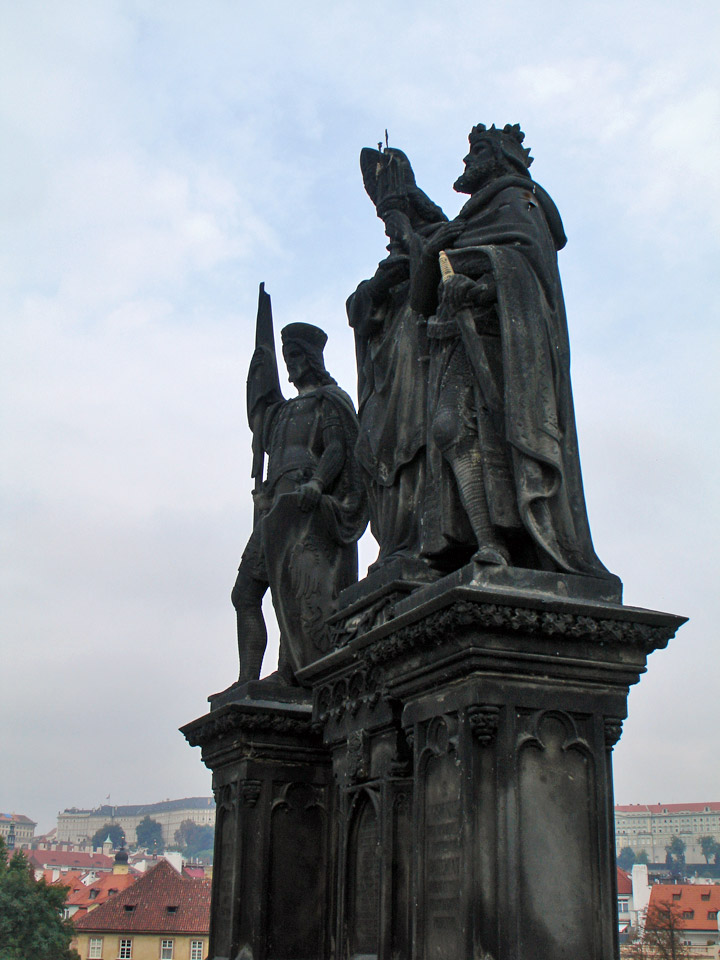 The avenue of 30 mostly baroque statues and statuaries situated on the balustrade forms a unique connection of artistic styles with the underlying gothic bridge. Most sculptures were erected between 1683 and 1714. They depict various saints and patron saints venerated at that time. The most prominent Bohemian sculptors of the time took part in decorating the bridge, such as: Matthias Braun, Jan Brokoff and his sons Michael Joseph and Ferdinand Maxmilian. 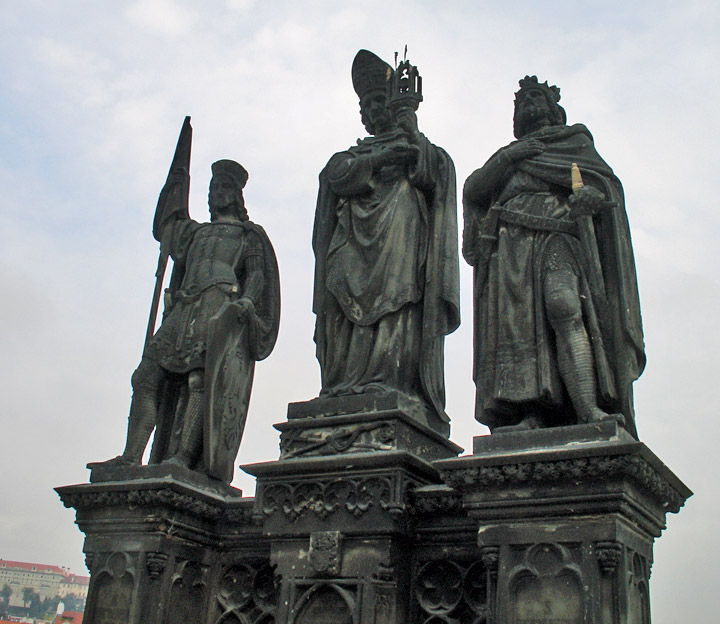 Among the most notable sculptures, one can find the statuaries of St. Luthgard, St. Crucifix or St. John of Nepomuk. Well known is also the statue of knight Bruncvík, although it does not belong to the main avenue. 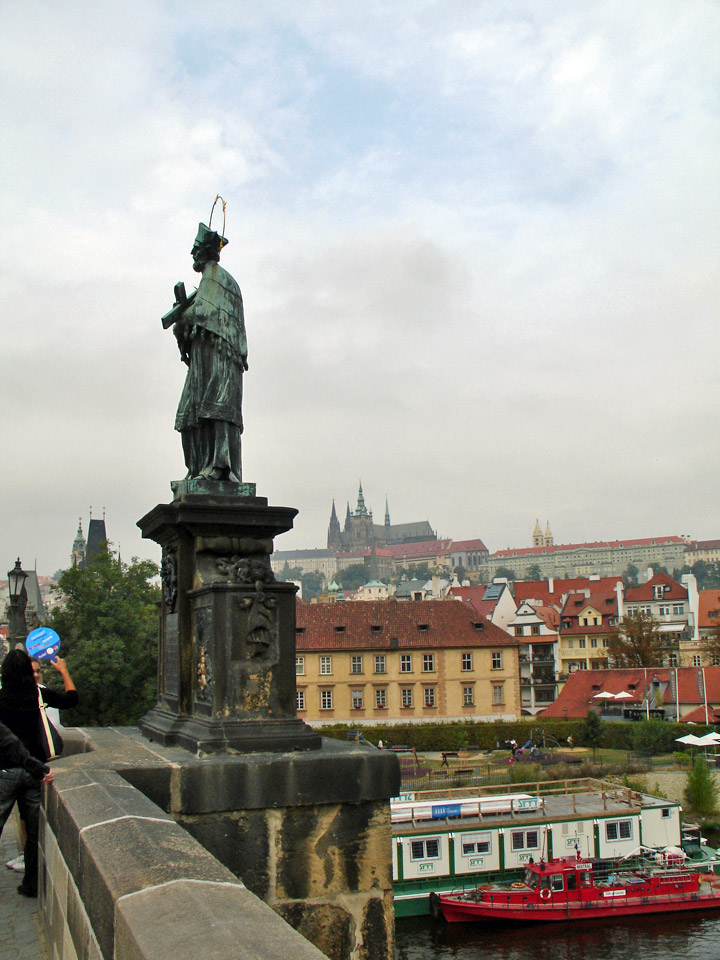 Beginning in 1965, all of the statues have been systematically replaced by replicas and the originals have been exhibited in the lapidarium of the National Museum. 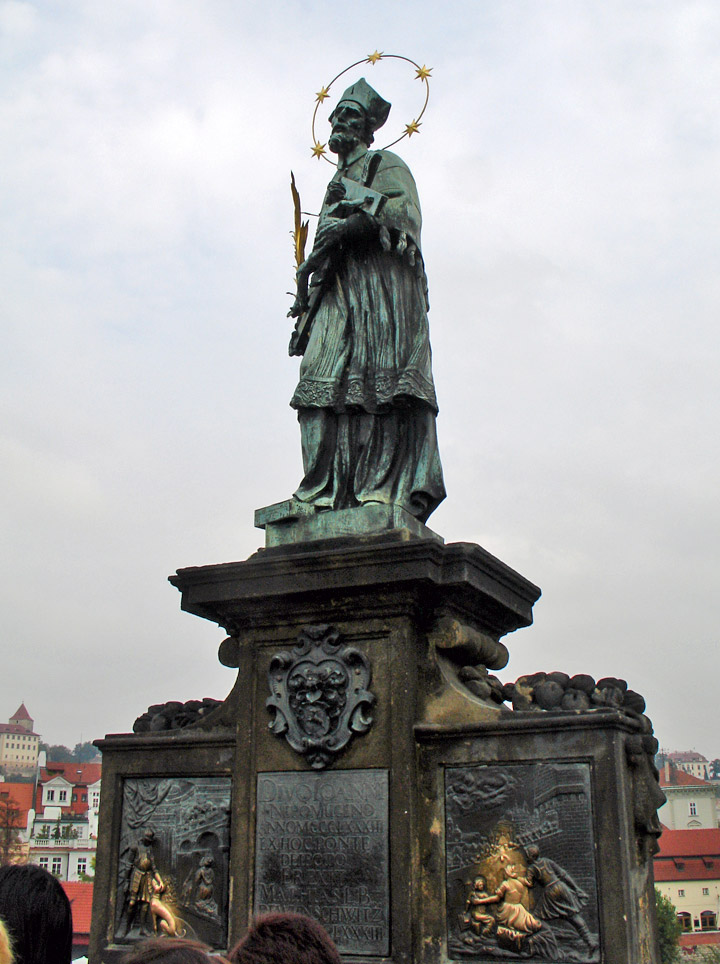 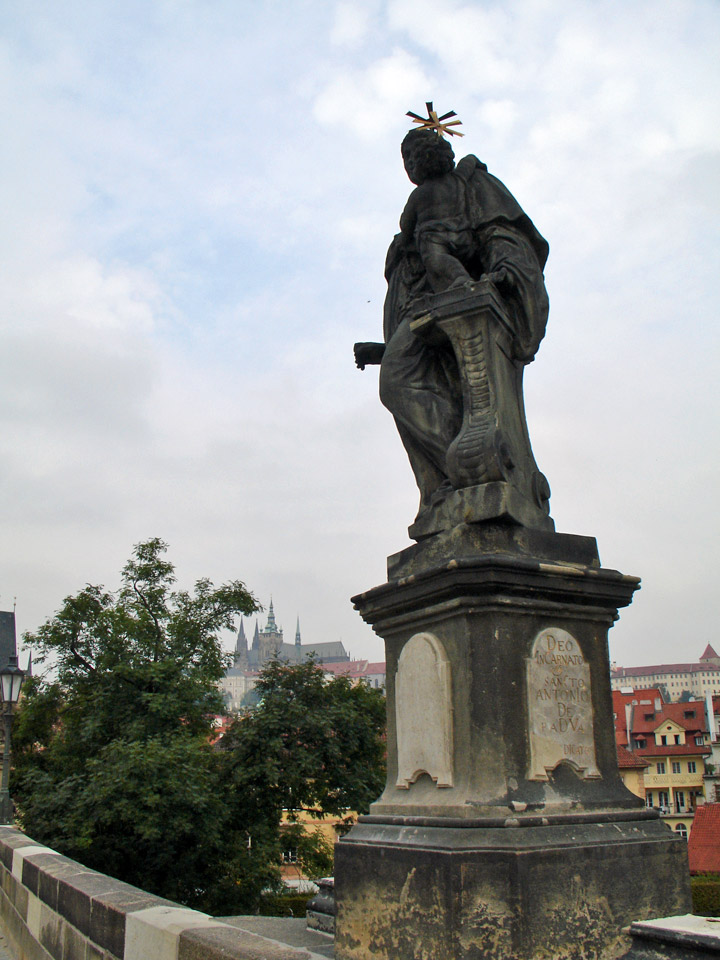 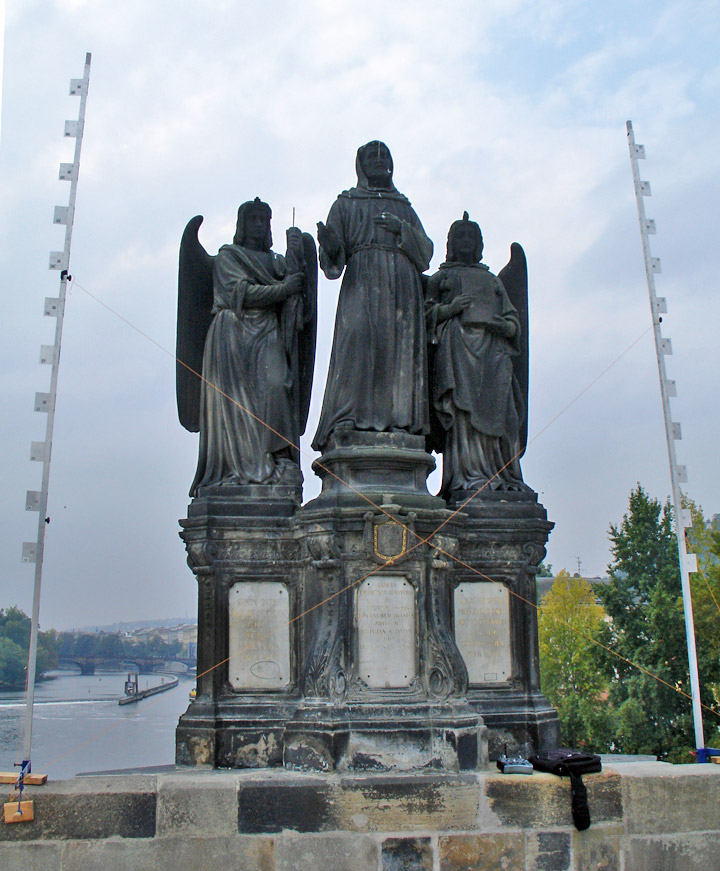 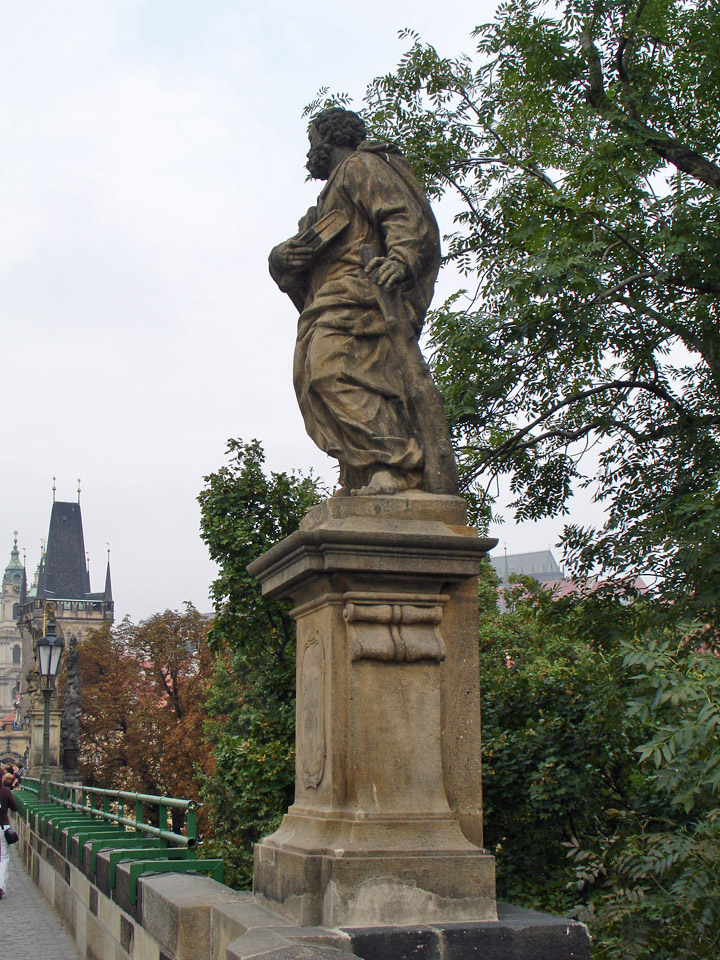 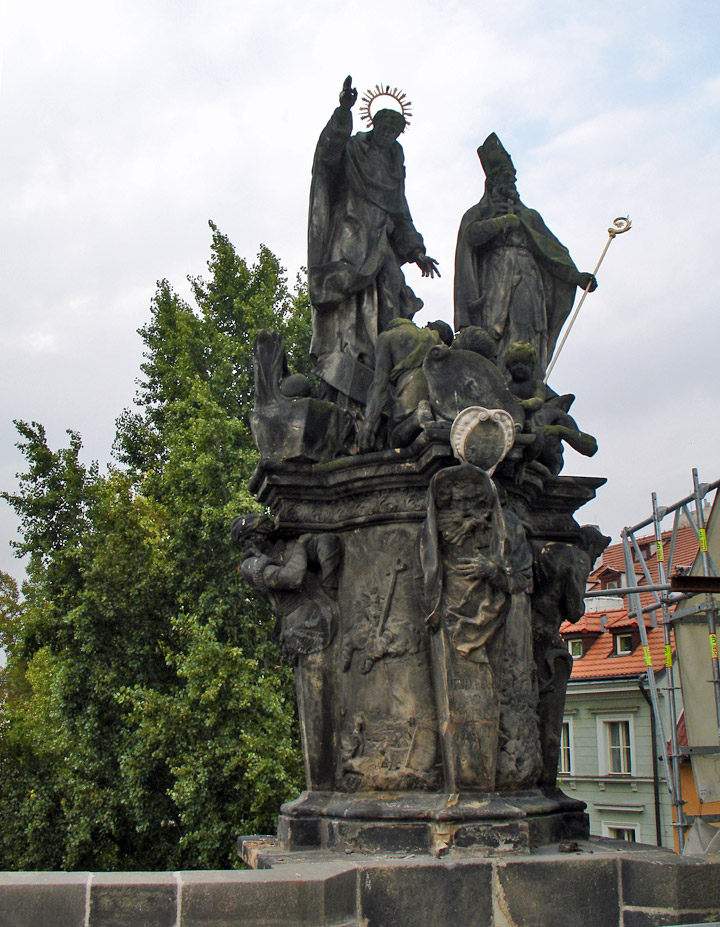 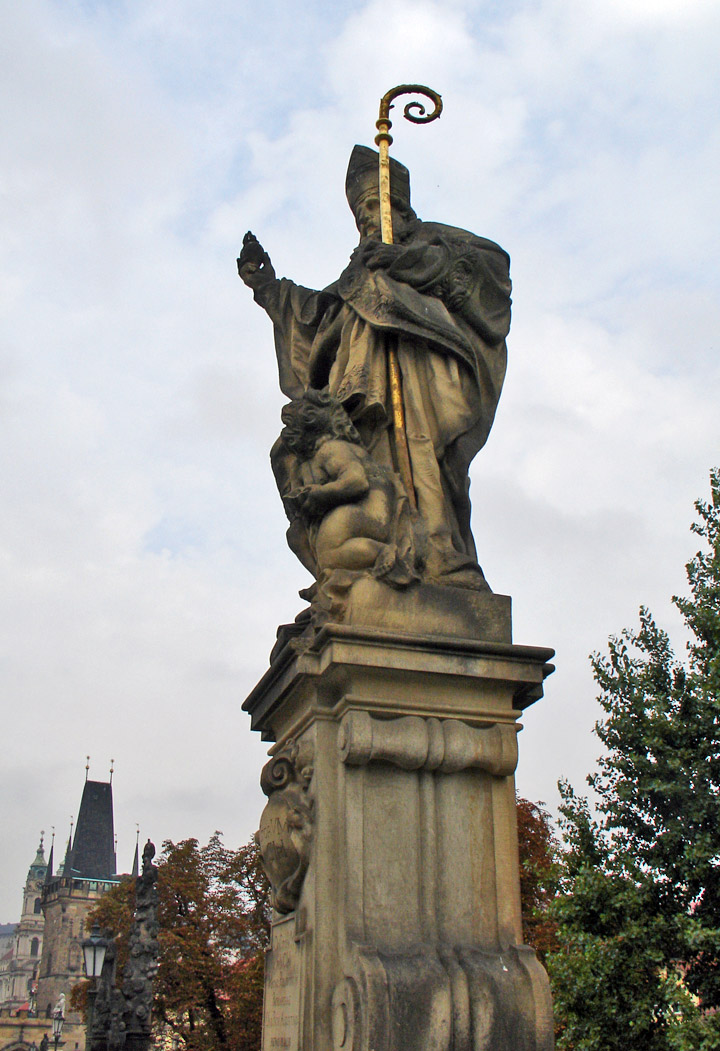 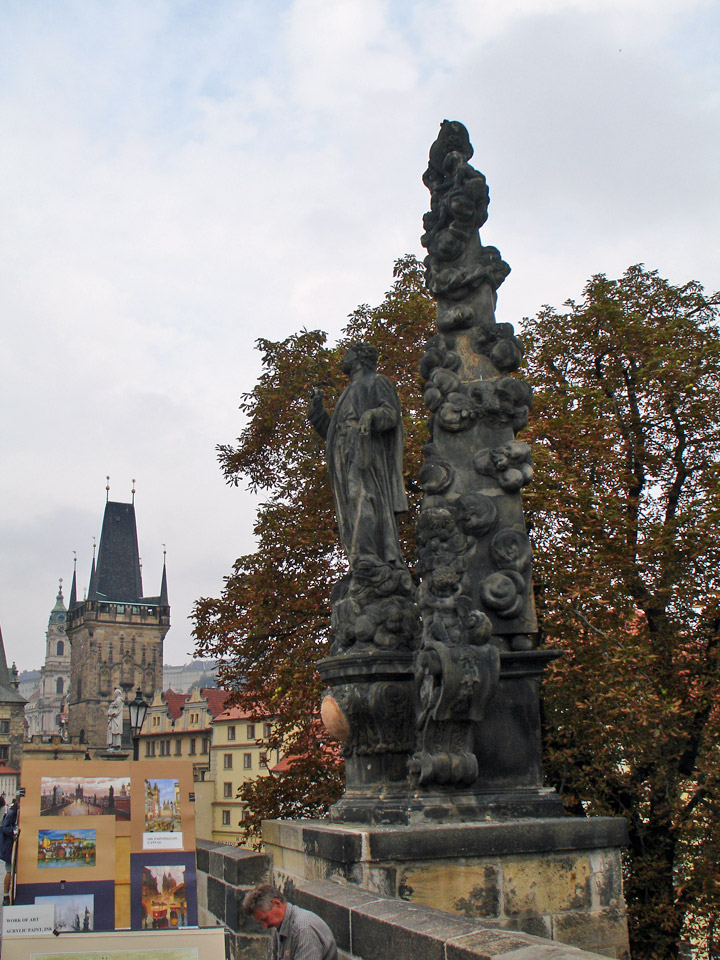 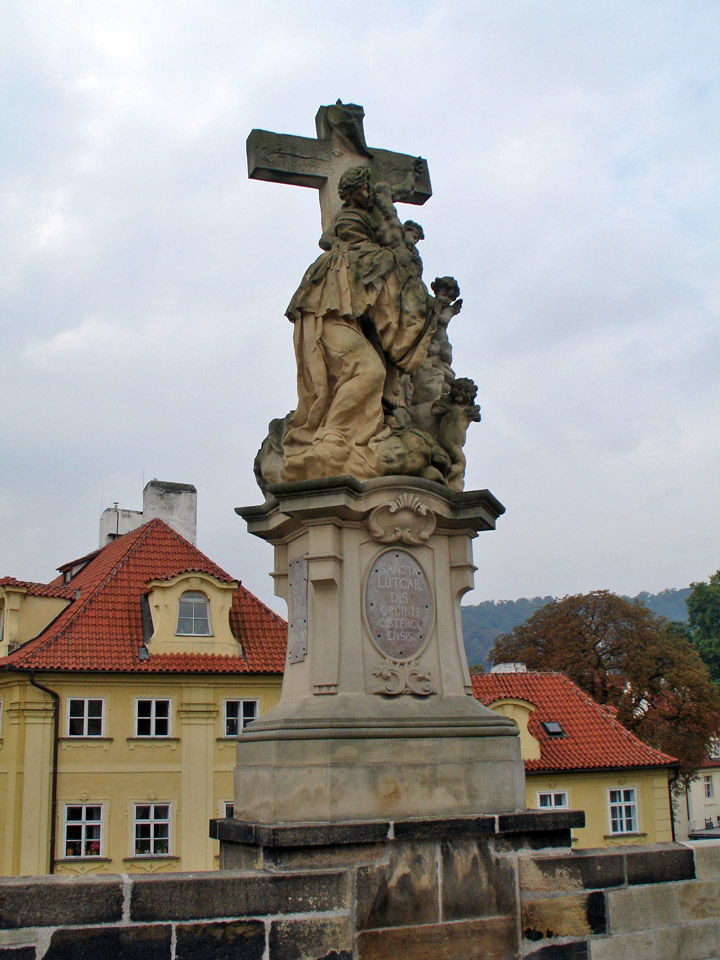 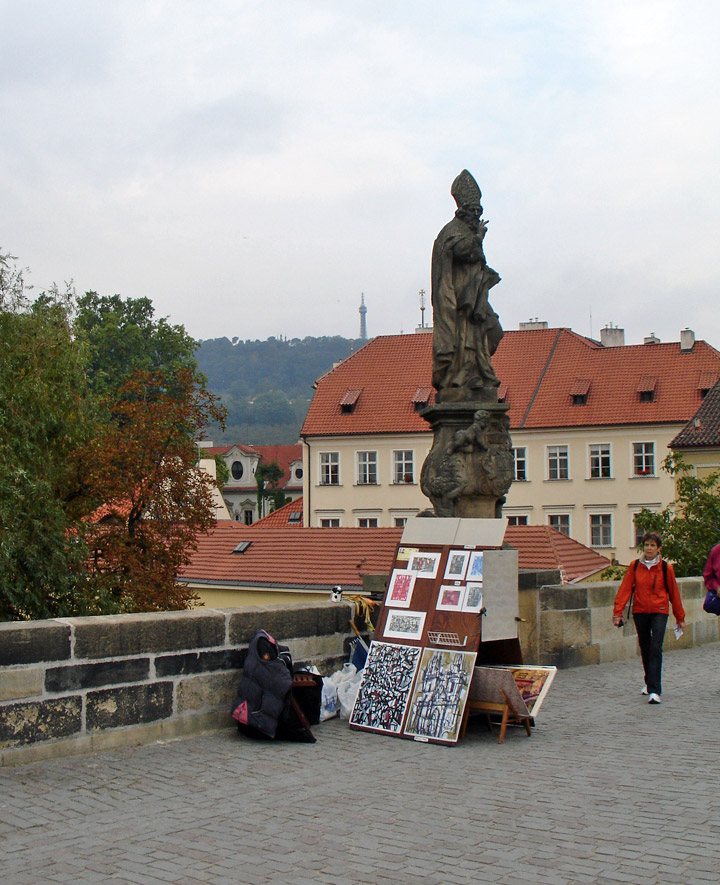 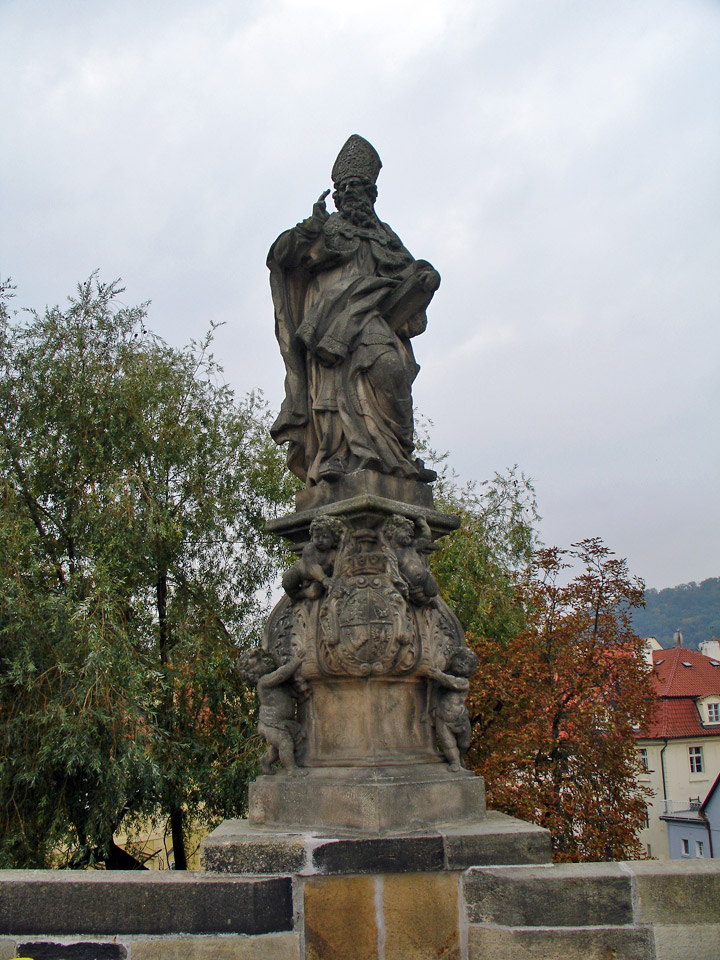 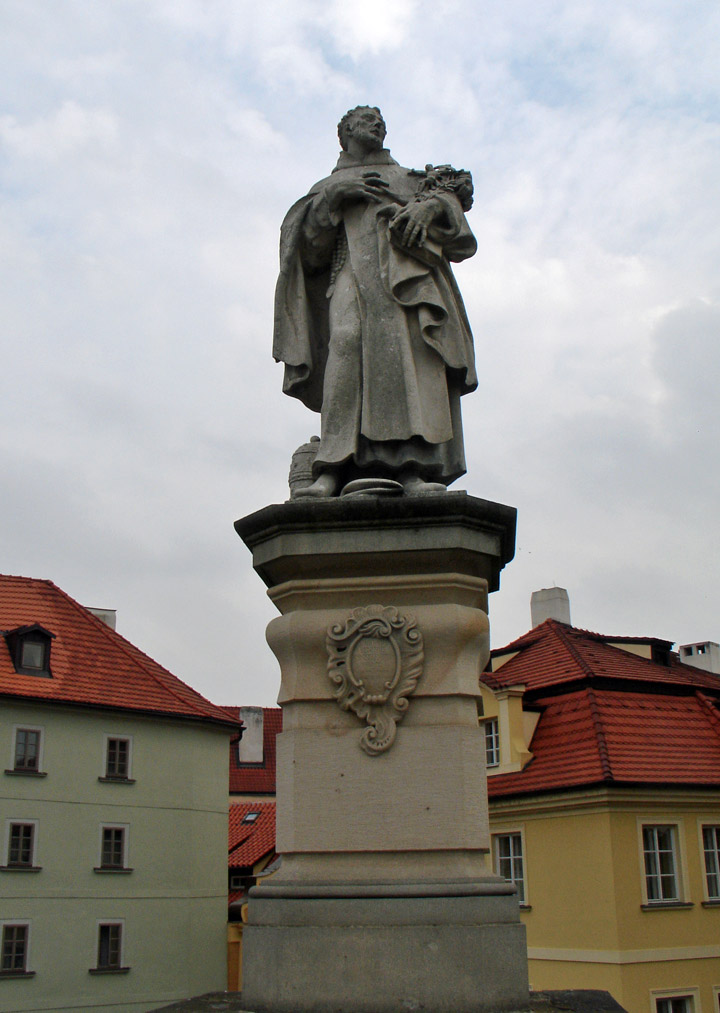 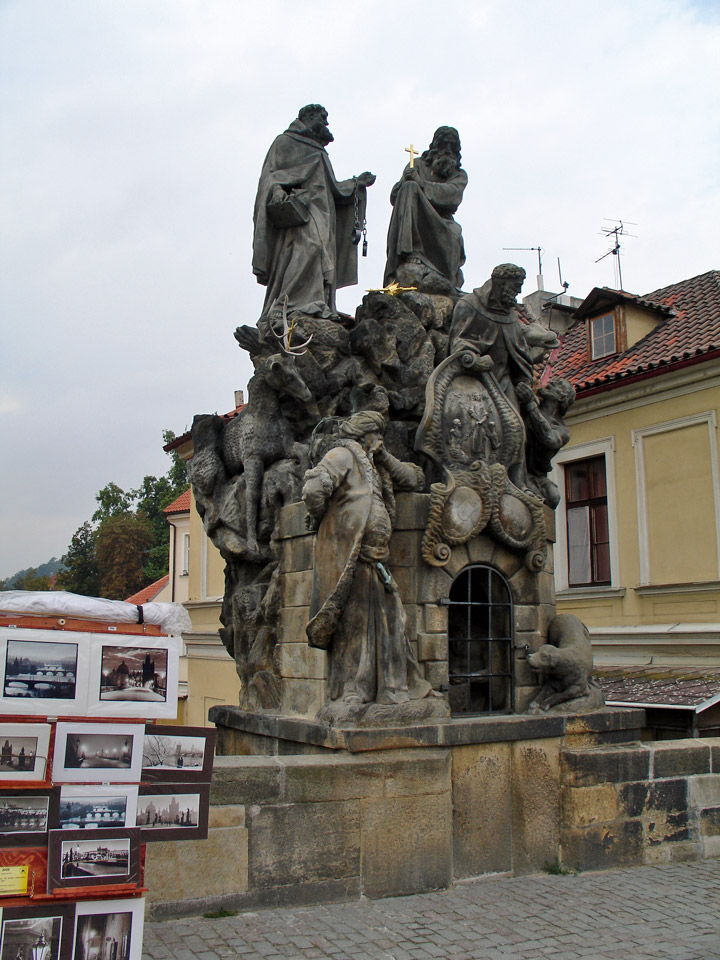 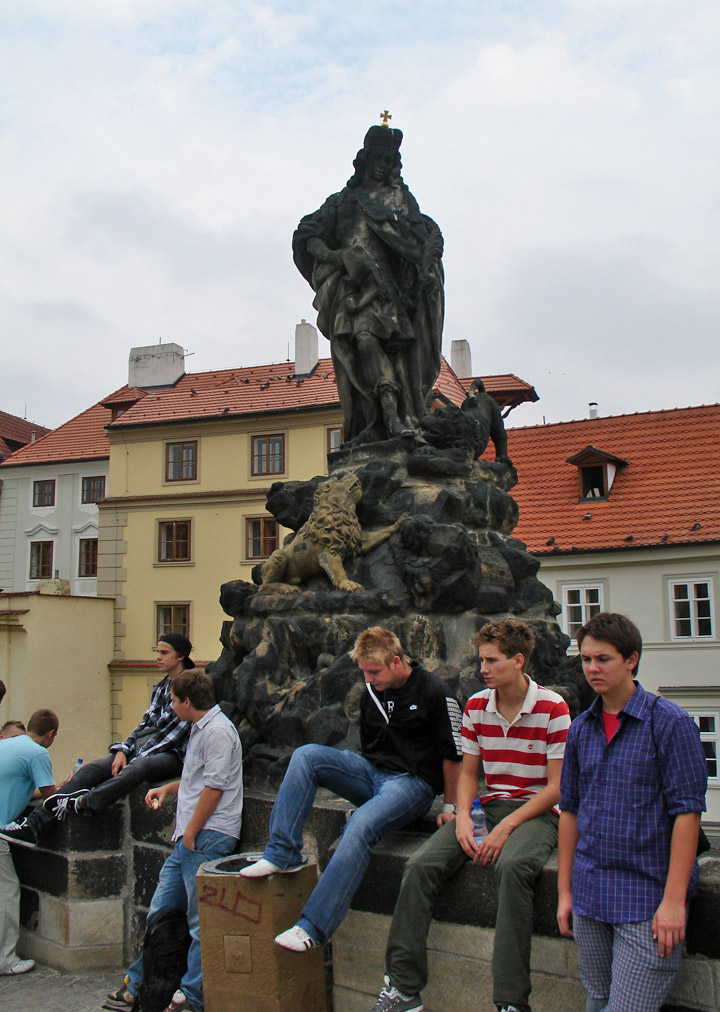