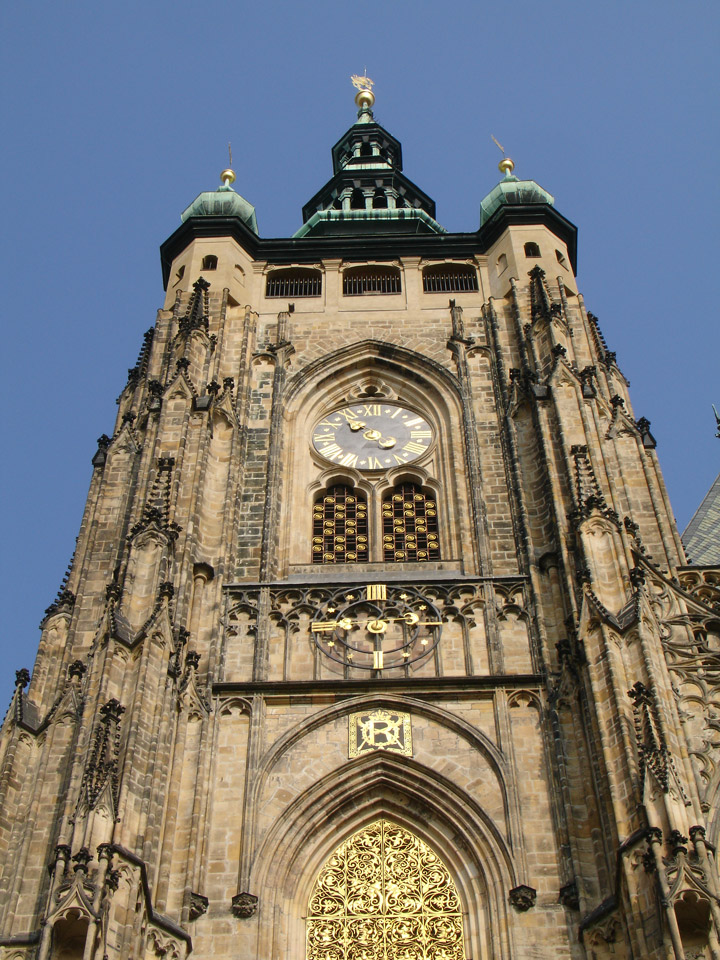 Saint Vitus's Cathedral (Czech: Katedrála svatého Víta) is a Roman Catholic cathedral in Prague, and the seat of the Archbishop of Prague. The full name of the cathedral is St. Vitus, St. Wenceslas and St. Adalbert Cathedral. Located within Prague Castle and containing the tombs of many Bohemian kings, this cathedral is an excellent example of Gothic architecture and is the biggest and most important church in the country. 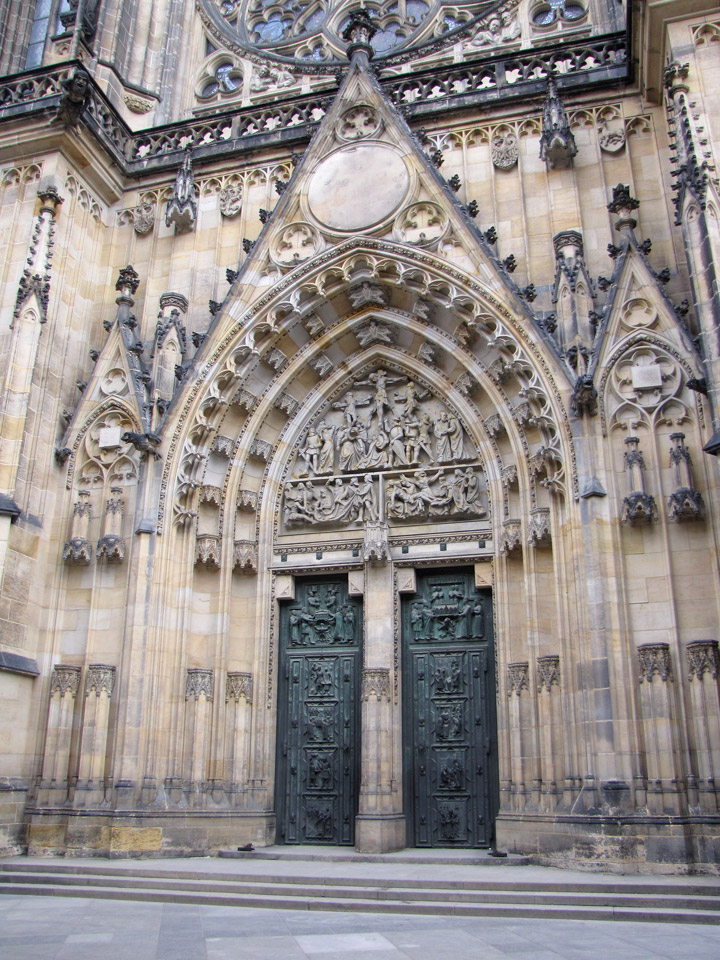 Photos of the Door Panels

The first church — also consecrated to St. Vitus — that stood at the location of the present-day cathedral was an early romanesque rotunda founded by Wenceslaus I, Duke of Bohemia in 925. This patron saint was chosen because Wenceslaus had acquired a holy relic — the arm of St. Vitus — from Emperor Henry I. It is also possible that Wenceslaus, wanting to convert his subjects to Christianity more easily, chose a saint whose name sounds very much like the name of Slavic solar deity Svantevit. Two religious populations, the increasing Christian and decreasing pagan community, lived simultaneously in Prague castle at least until the 11th century. 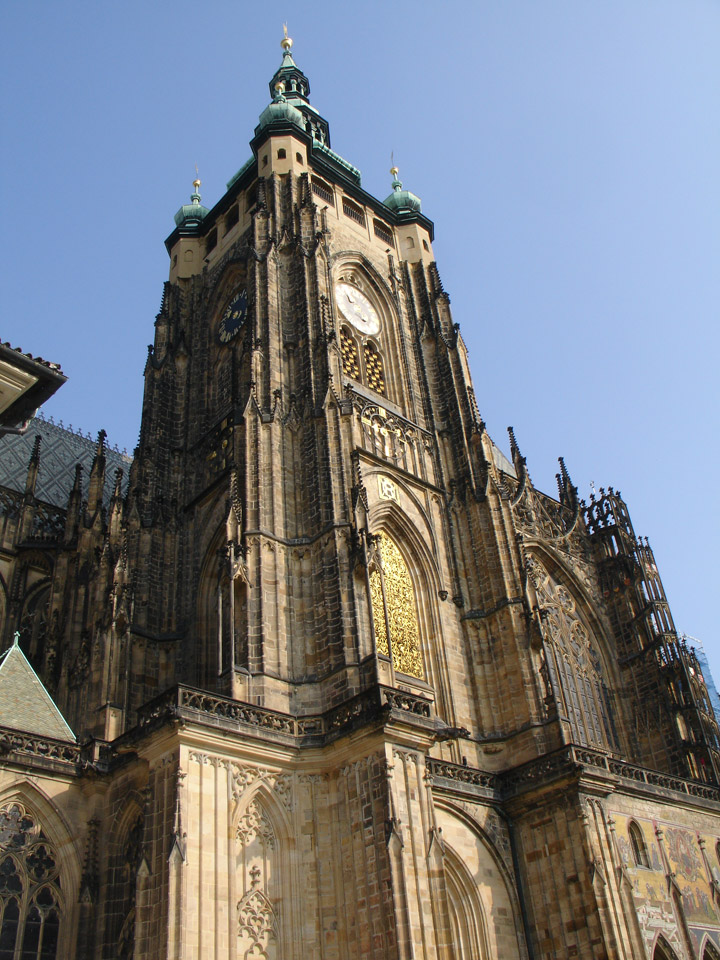 In the year 1060, as the bishopric of Prague was founded, prince Spythinev II embarked on building a more spacious church, as it became clear the existing rotunda was too small to accommodate the faithful. A much larger and more representative romanesque basilica was built in its spot. Though still not completely reconstructed, most experts agree it was a triple-aisled basilica with two choirs and a pair of towers connected to the western transept. The design of the cathedral nods to Romanesque architecture of the Holy Roman Empire, most notably to the abbey church in Hildesheim and the Speyer Cathedral. The southern apse of the rotunda was incorporated into the eastern transept of the new church because it housed the tomb of St. Wenceslaus, who had by now become the patron saint of the Czech princes. A bishop's mansion was also built south of the new church, and was considerably enlarged and extended in the mid 12th-century. 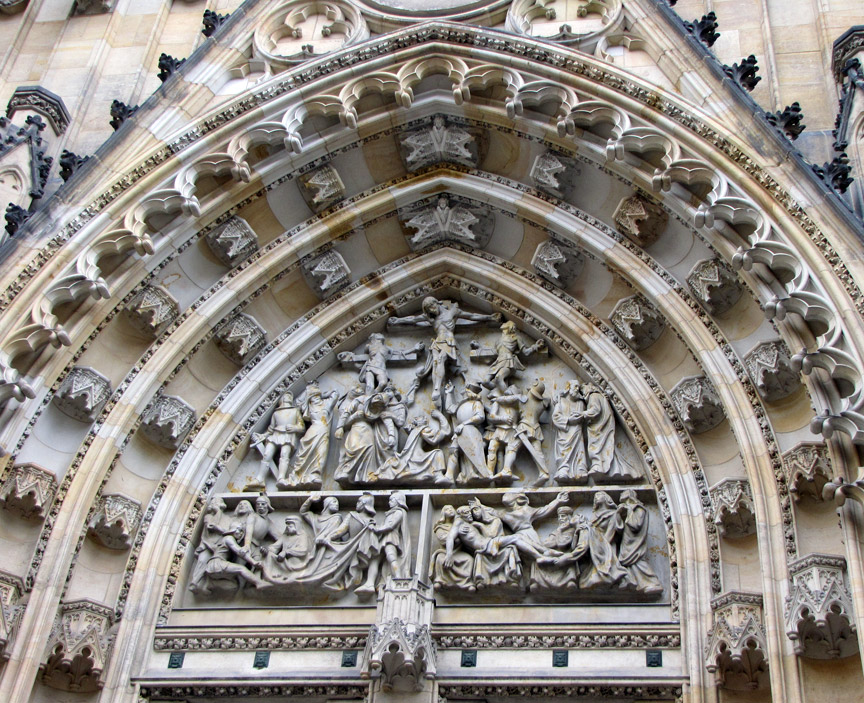 The present day Gothic Cathedral was founded on 21st of November, 1344, when the Prague bishopric was raised to an archbishopric. Its patrons were the chapter of cathedral (led by a Dean), the Archbishop Arnost of Pardubice, and, above all, Charles IV, King of Bohemia and a soon-to-be Holy Roman Emperor, who intended the new cathedral to be a coronation church, family crypt, treasury for the most precious relics of the kingdom, and the last resting place cum pilgrimage site of patron saint Wenceslaus. The first master builder was a Frenchman Matthias of Arras, summoned from the papal palace in Avignon. Matthias designed the overall layout of the building as, basically, an import of French Gothic: a triple-naved basilica with flying buttresses, short transept, five-bayed choir and decagon apse with ambulatory and radiating chapels. However, he lived to build only the easternmost parts of the choir: the arcades and the ambulatory. The slender verticality of Late French Gothic and clear, almost rigid respect of proportions distinguish his work today. 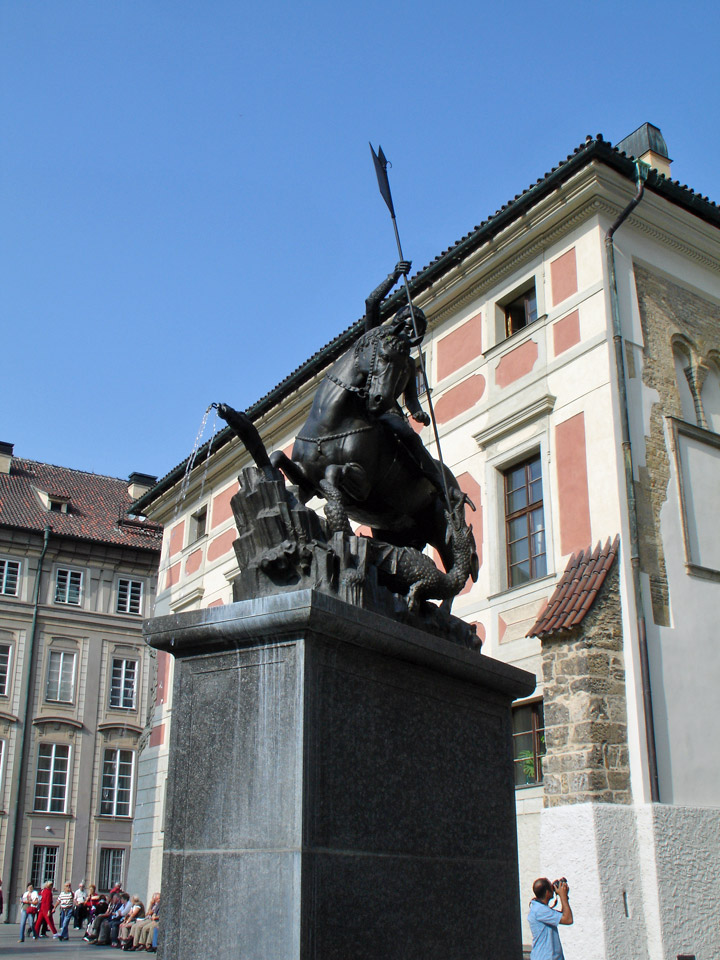 After Matthias' death in 1352, a new master builder took over the cathedral workshop. This was Peter Parler, at that time only 23-years old and son of the architect of the Heilig-Kreuz-Münster in Schwäbisch Gmünd. Parler at first only worked according to the plans left by his predecessor, building the sacristy on the north side of the choir and the chapel on the south. Once he finished all that Matthias left unfinished, he continued according to his own ideas. Parler's bold and innovative design brought in a unique new synthesis of Gothic elements in architecture. This is best exemplified in the vaults he designed for the choir. The so-called Parler's vaults or net-vaults have double (not single, as in classic High Gothic groin vaults) diagonal ribs that span the width of the choir-bay. The crossing pairs of ribs create a net-like construction (hence the name), which considerably strengthens the vault. They also give a lively ornamentation to the ceiling, as the interlocking vaulted bays create a dynamic zigzag pattern down the length of the cathedral. 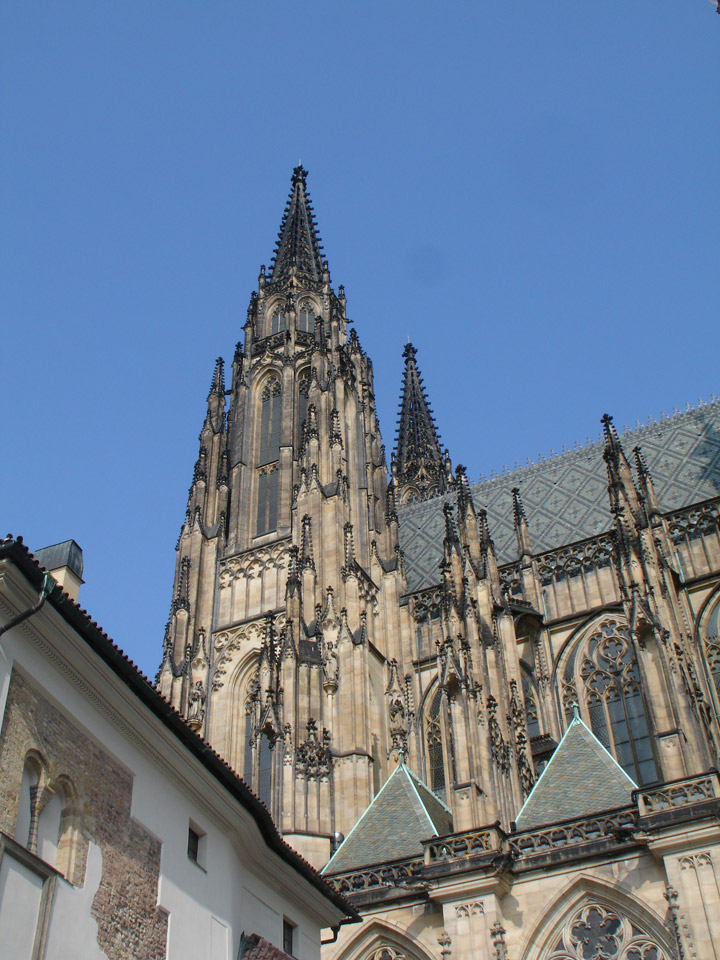 While Matthias of Arras was schooled as a geometer, thus putting an emphasis on rigid systems of proportions and clear, mathematical compositions in his design, Parler was trained as sculptor and woodcarver. He treated architecture as a sculpture, almost as if playing with structural forms in stone. Aside from his rather bold vaults, the peculiarities of his work can also be seen in the design of pillars (with classic, bell-shaped columns which were almost forgotten by High Gothic), the ingenious dome vault of new St Wenceslaus chapel, the undulating clerestory walls, the original window tracery (no two of his windows are the same, the ornamentation is always different) and the blind tracery pannels of the buttresses. Architectural sculpture was given a considerable role while Parler was in charge of construction, as can be seen in the corbels, the passageway lintels, and, particularly, in the busts on the triforium, which depict faces of the royal family, saints, Prague bishops, and the two master builders, including Parler himself. 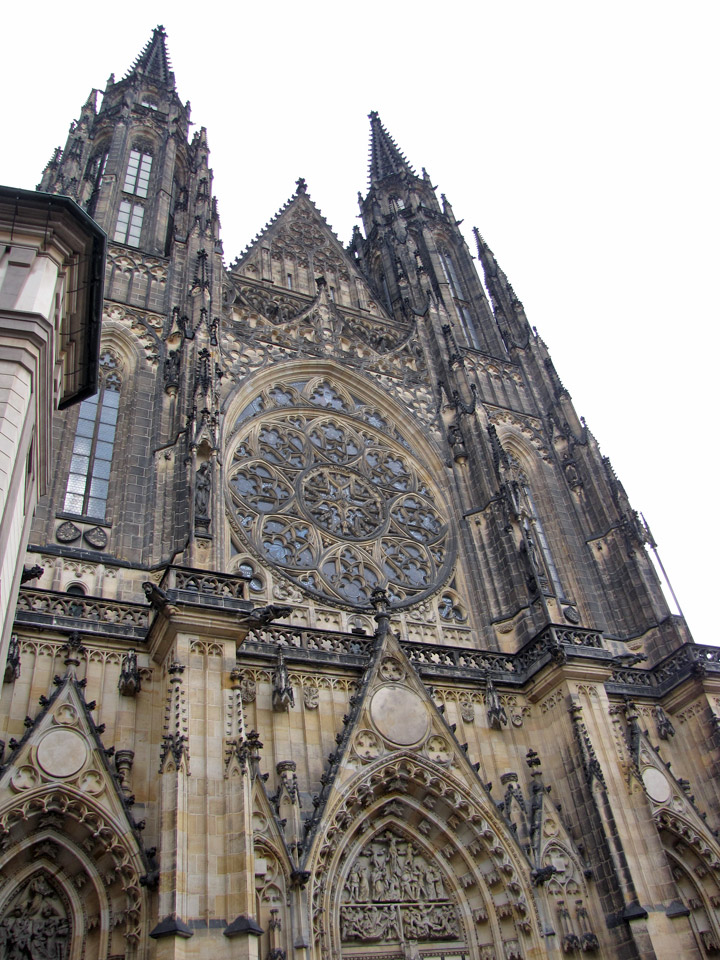 Work on the cathedral, however, proceeded rather slowly, due to the fact that in the meantime the Emperor commissioned Parler with many other projects, such as the construction of the new Charles bridge in Prague and many churches throughout the Czech realm. By 1397, when Peter Parler died, only the choir and parts of the transept were finished. 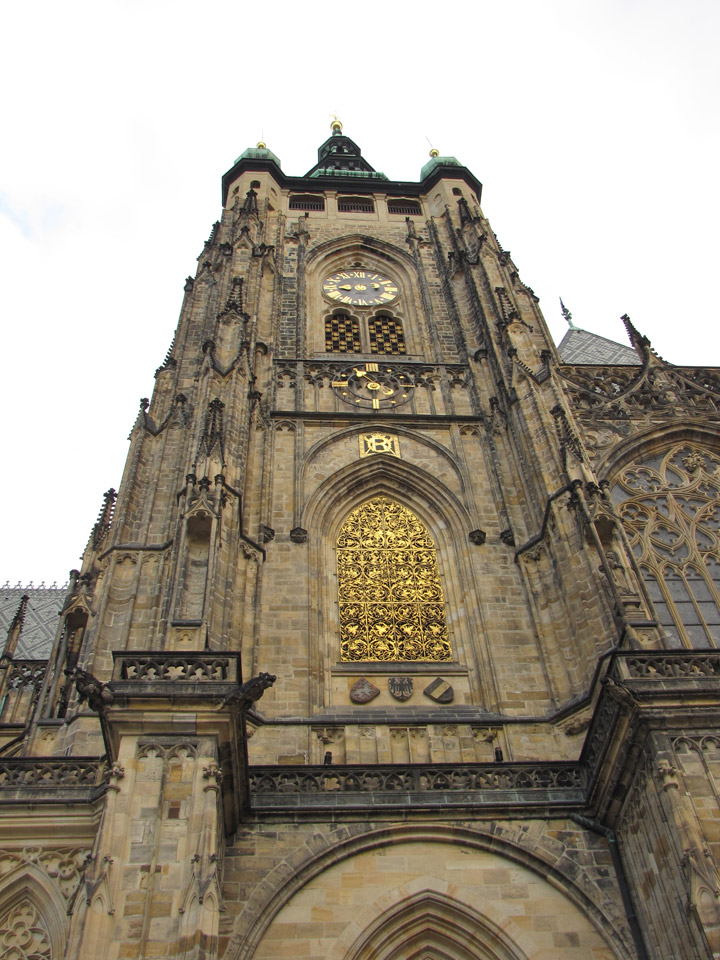 After Peter Parler's death in 1399 his sons, Wenzel Parler and particularly Johannes Parler, continued his work; they in turn were succeeded by a certain Master Petrilk, who by all accounts was also a member of Parler's workshop. Under these three masters, the transept and the great tower on its south side were finished. So was the gable which connects the tower with the south transept. Nicknamed 'Golden Gate' (likely because of the golden mosaic of Last Judgment depicted on it), it is through this portal that the kings entered the cathedral for coronation ceremonies. 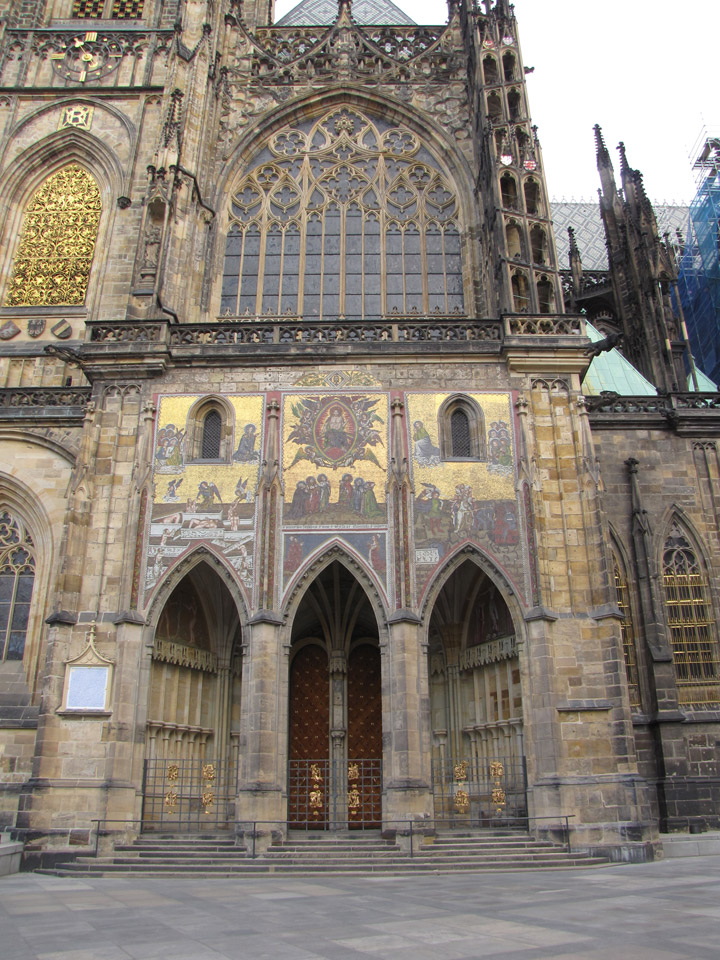 The entire building process came to a halt with the beginning of Hussite War in the first half of 15th century. The war brought an end to the workshop that operated steadily over for almost a century, and the furnishings of cathedral, dozens of pictures and sculptures, suffered heavily from the ravages of Hussite iconoclasm. As if this was not enough, a great fire in 1541 considerably damaged the cathedral. 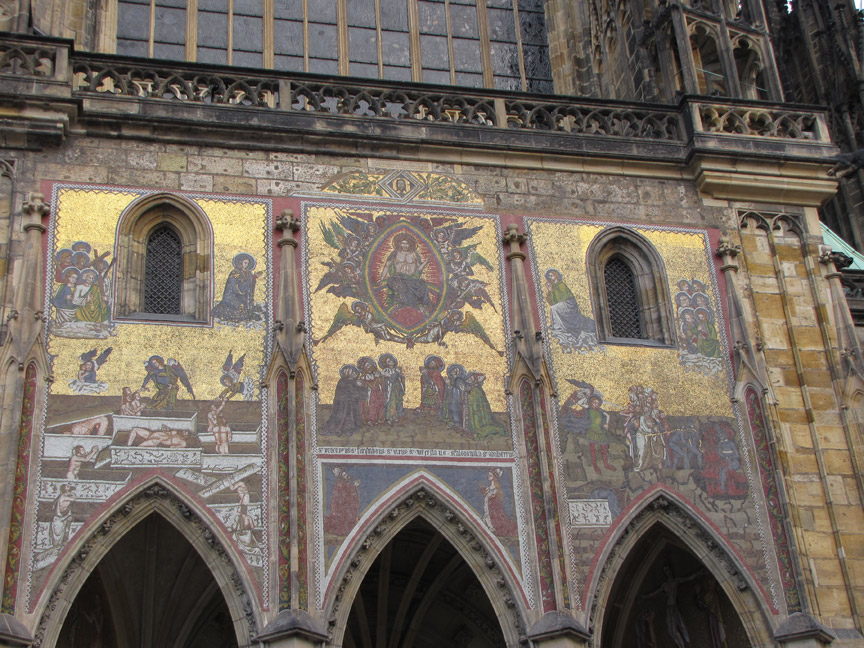 Perhaps the most outstanding place in the cathedral is the Chapel of St. Wenceslas, where the relics of the saint are kept. The room was built by Peter Parler between 1344 and 1364 and has a ribbed vault. The lower part of the walls are wonderfully decorated with over 1300 semi-precious stones and paintings about the Passion of Christ dating from the original decoration of the chapel in 1372-1373. The upper part of the walls have paintings about the life of St Wenceslas, created by the Master of the Litoměřice Altarpiece between 1506 and 1509. In the middle of the wall there is a gothic statue of St Wenceslas executed by Jindrich Parler (Peter's nephew) in 1373. Unfortunately the Chapel is not accessible by members of the public, but can be viewed from its doorways instead. 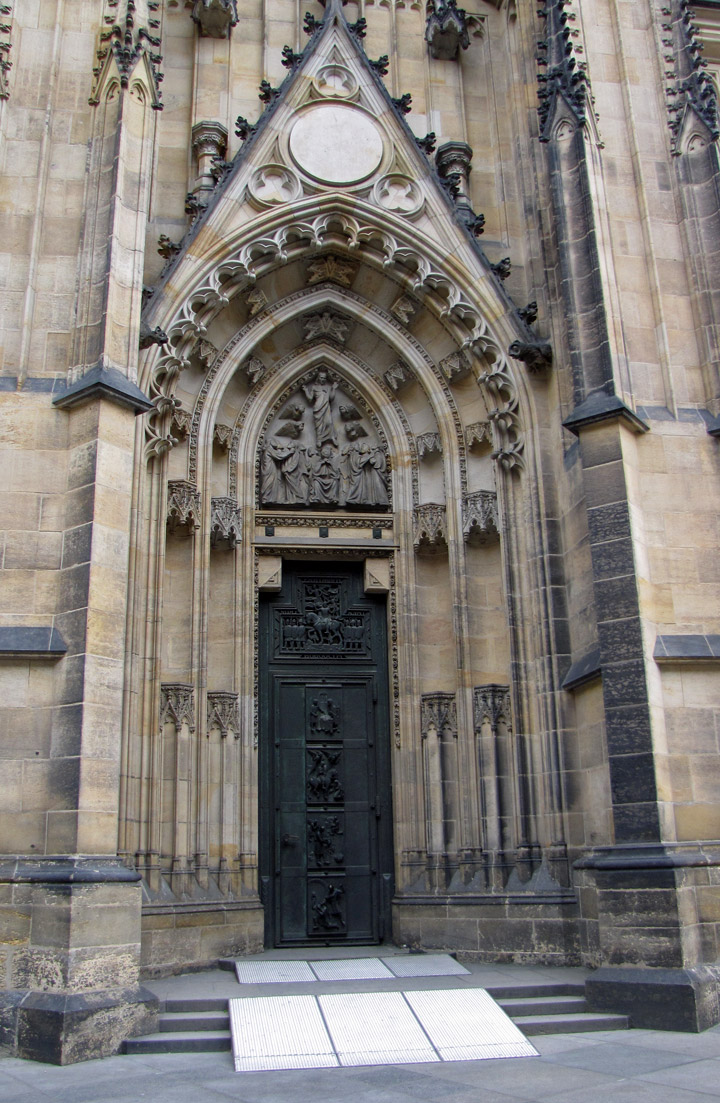 Through most of the following centuries, the cathedral stood only half-finished. It was built up to the great tower and a transept, which was closed by a provisional wall. In the place of a three-aisled nave-to-be-built, a timber-roofed construction stood, and services were held separately there from the interior of the choir. Several attempts to continue the work on cathedral were mostly unsuccessful. In the latter half of 15th century, king Vladislav Jagiellon commissioned the great Renaissance-Gothic architect Benedict Ried to continue the work on the cathedral, but almost as soon as the work began, it was cut short because of lack of funds. Later attempts to finish the cathedral only brought some Renaissance and Baroque elements into the Gothic building, most notably the obviously different Baroque spire of the south tower and the great organ in the northern wing of transept. 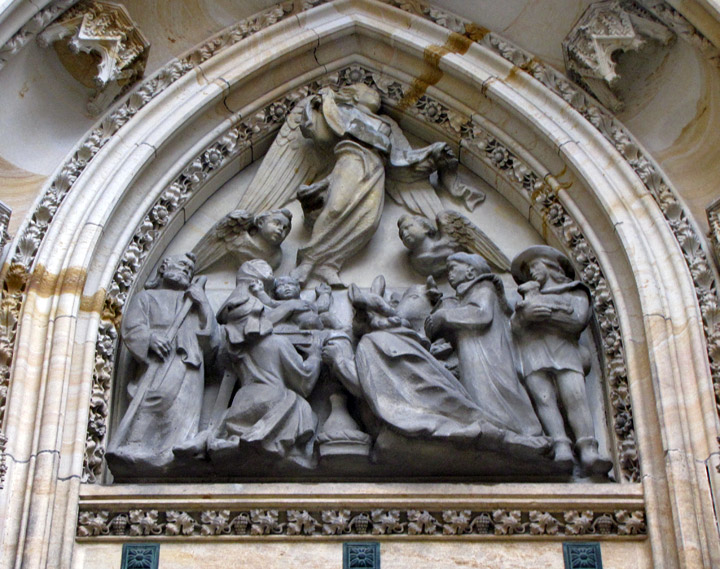 In 1844 Vácslav Pešina, an energetic St Vitus canon, together with Neo-Gothic architect Josef Kranner presented a program for renovation and completion of the great cathedral at the gathering of German architects in Prague. The same year a society under the full name "Union for Completion of the Cathedral of St Vitus in Prague" was formed, whose aim was to repair, complete and get rid of "everything mutilated and stylistically inimical". Josef Kranner was heading what was mostly repair work from 1861 to 1866, getting rid of Baroque decorations deemed unnecessary and restoring the interior. In 1870 the foundations of the new nave were finally laid, and in 1873, after Kramer's death, architect Josef Mocker took over the reconstruction. It was he who designed the west facade in a typical classic Gothic manner with two towers, and the same design was adopted, after his death, by the third and final architect of restoration, Kamil Hilbert. 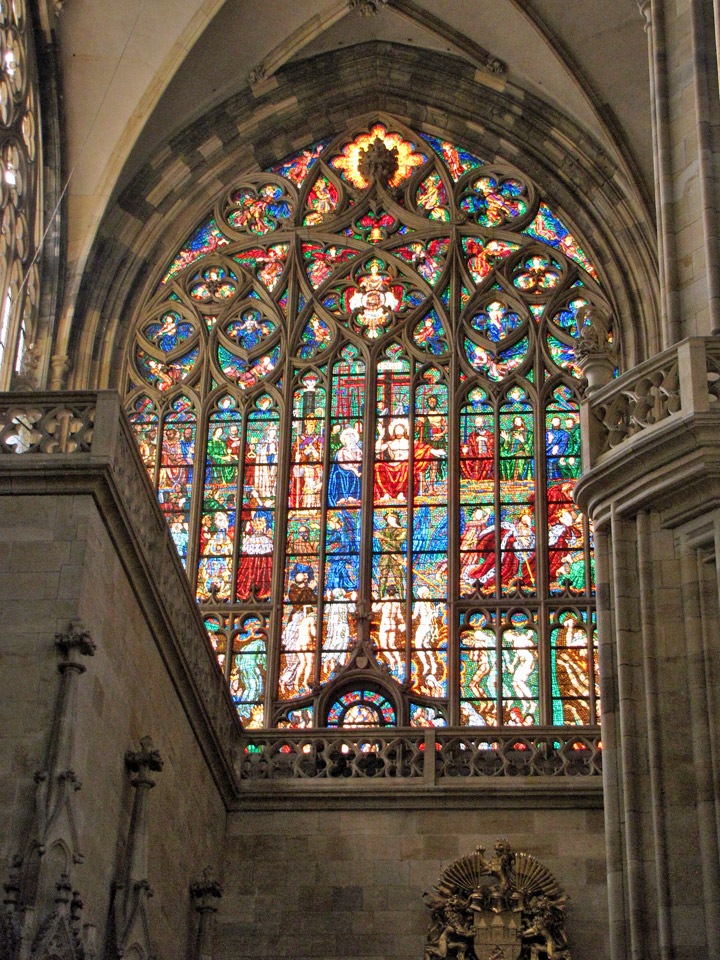 Photos of the stain glass windows

Photos of the cathedral interior 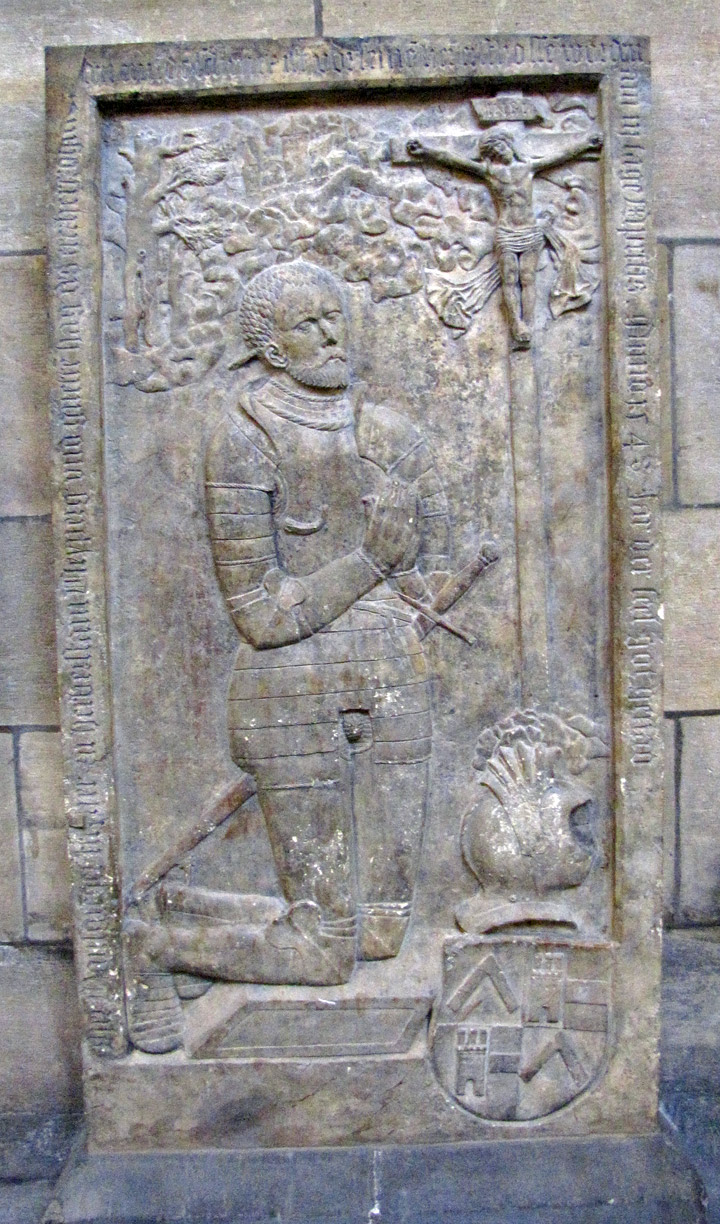 Photos of other monuments with the cathedral

In the 1920s the sculptor Vojtěch Sucharda worked on the facade, and the famous Czech Art Nouveau painter Alfons Mucha decorated the new windows in the north part of nave. The Rose Window was designed by Frantisek Kysela in 1925-7. This Rose Window above the portal depicts scenes from the biblical story of creation. By the time of St Wenceslas jubilee in 1929, the St Vitus cathedral was finally finished; it took almost 600 years to built it. Despite the fact that entire western half of Cathedral is a Neo-Gothic addition, much of the design and elements developed by Peter Parler were used in the restoration, giving the Cathedral as a whole a harmonious, unified look. 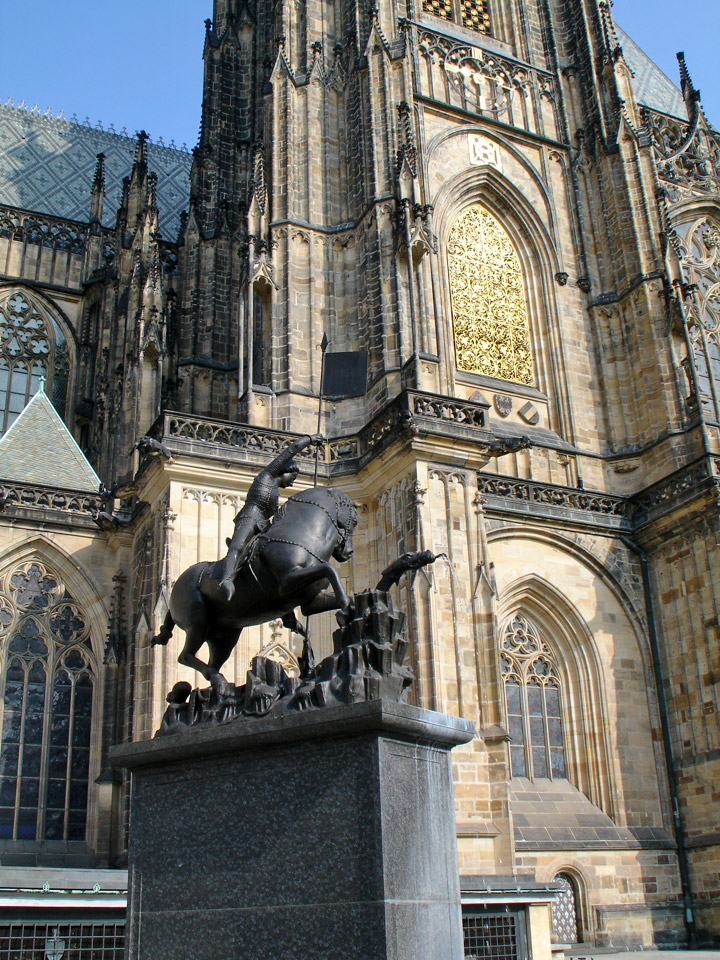 The Cathedral of St. Vitus had tremendous influence on the development of Late Gothic style characteristic for Central Europe. Members of Parler workshop, and indeed, the Parler clan (both of which were established at the building site of St. Vitus) designed numerous churches and buildings across Central Europe. More notable examples include Stephansdom cathedral in Vienna, Strasbourg Cathedral, Church of St. Marko in Zagreb and the Church of St. Barbara in Kutna Hora, also in Czech Republic. Regional Gothic styles of Slovenia, northern Croatia, Austria, Czech Republic, Poland and southern Germany were all heavily influenced by Parler design. 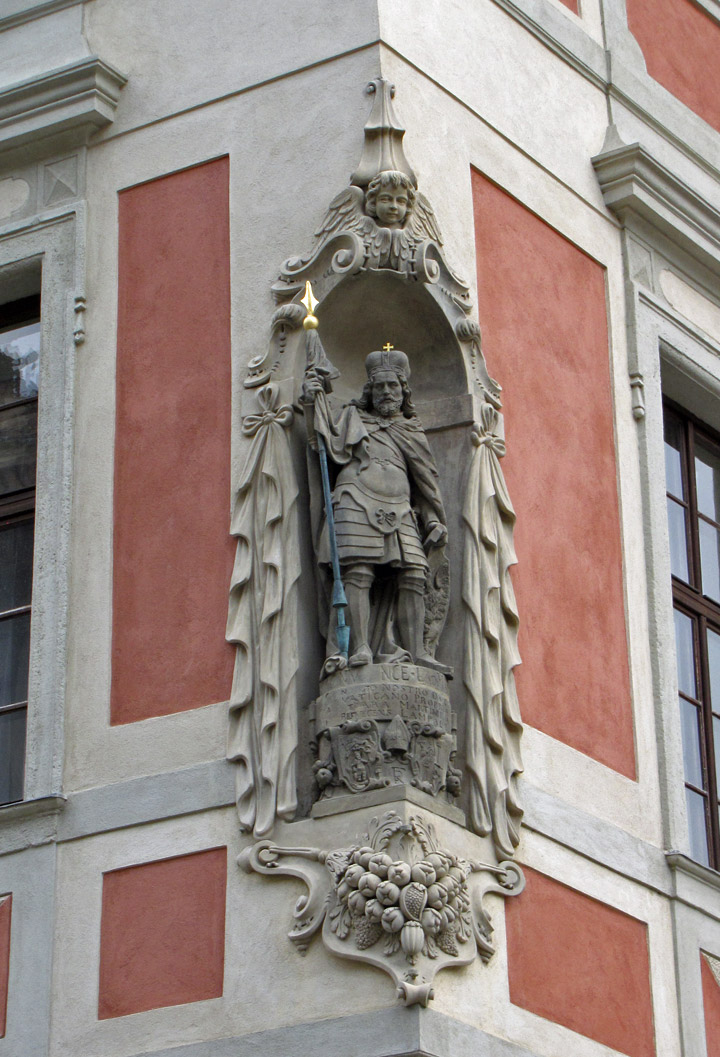 Of particular interest are Parler's net vaults. The Late Gothic of Central Europe is characterised by ornate and extraordinary vaulting, a practice which was started by Parler's development of his own vaulting system for the choir of St. Vitus cathedral. Another regional Gothic style also displays amazing ingenuity and ornamentation in the design of vaults, the Perpendicular Style of English Gothic. A question remains of what was influenced by what. Some British art and architecture historians suspected that Peter Parler might have travelled to England at some point in his life, studying the great English Gothic cathedrals, which then inspired his work on St Vitus. However, taking into account that the Perpendicular style and the use of truly extravagant vaults in English Gothic began at the very end of 14th century, it is also quite possible that it was St Vitus Cathedral of Prague that influenced the development of English Gothic. 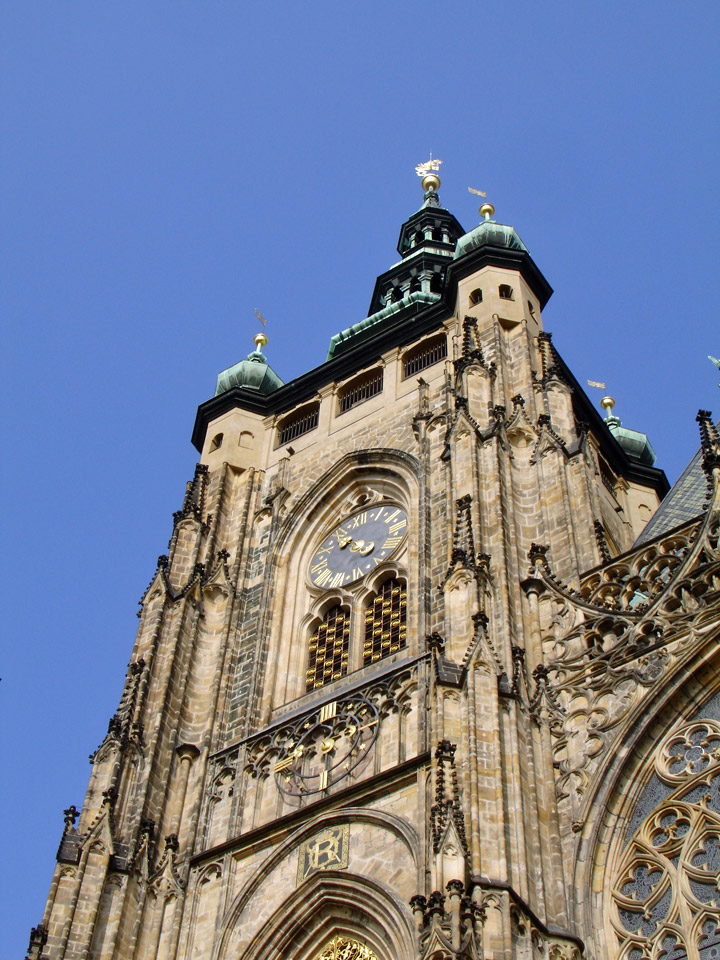 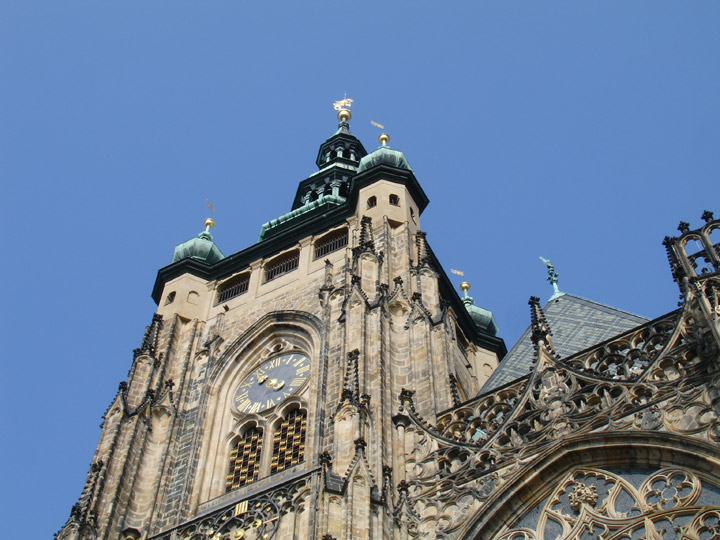 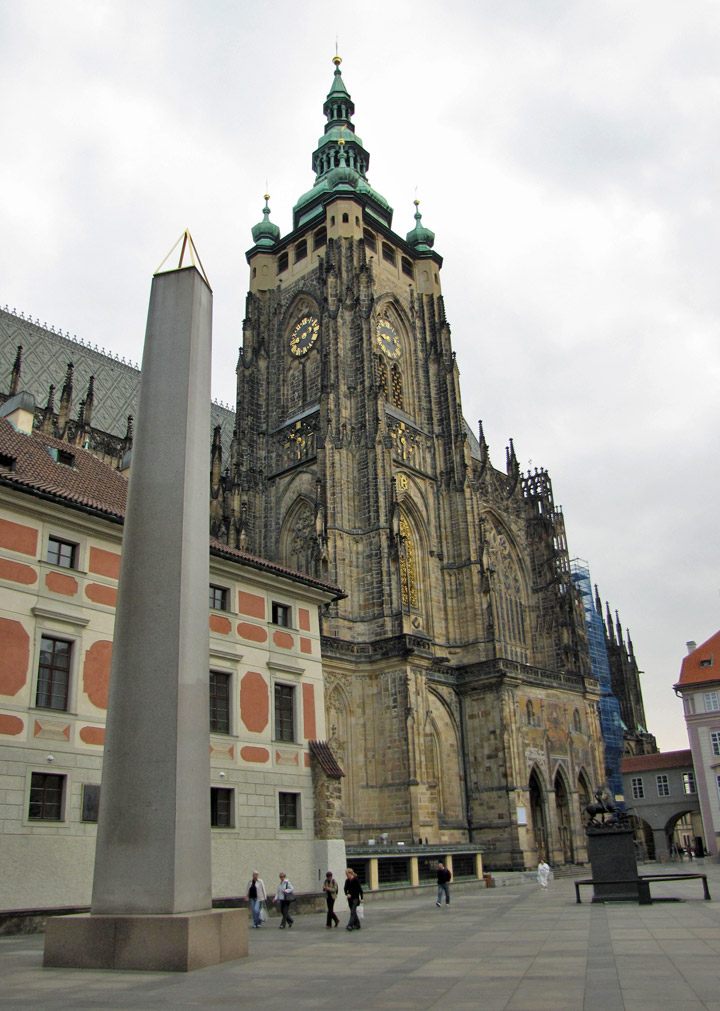 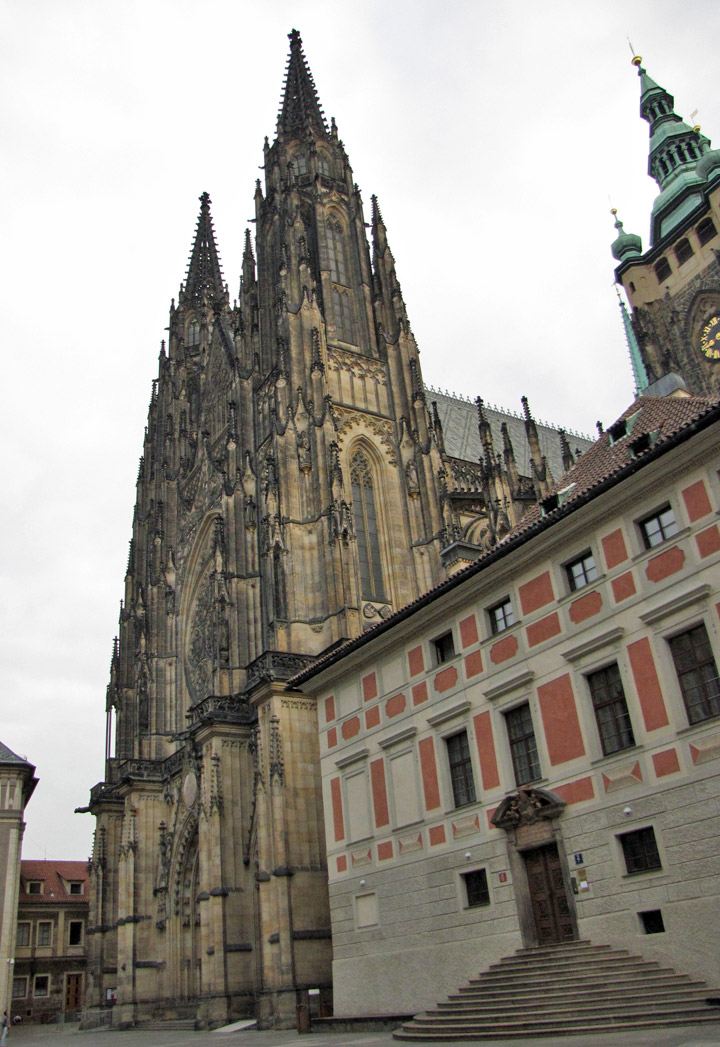 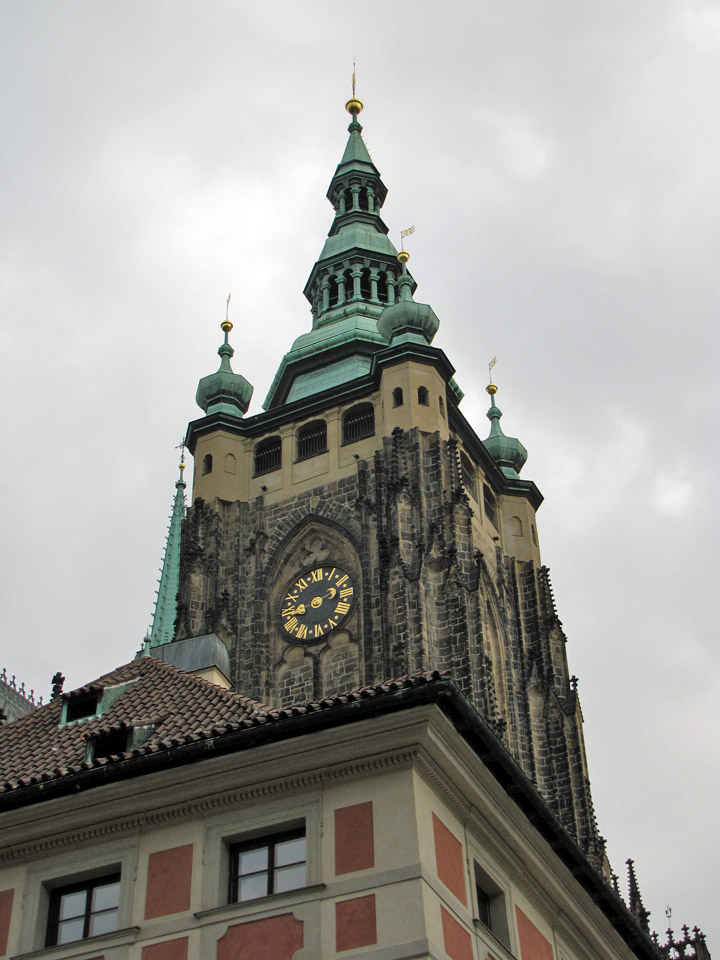 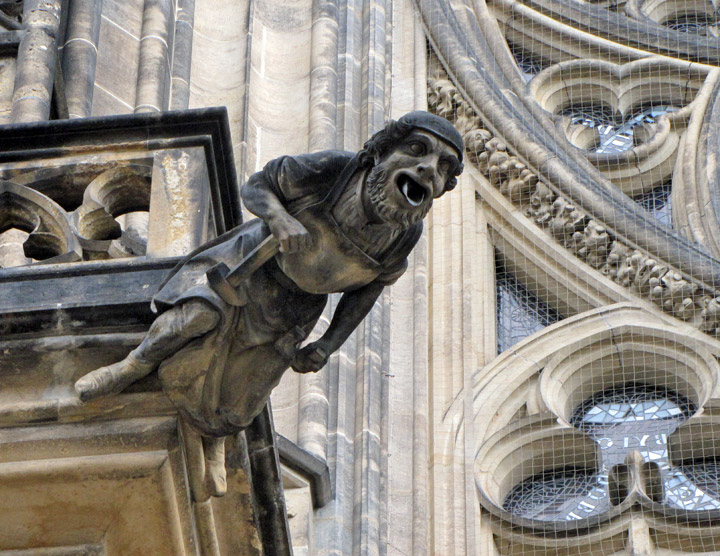 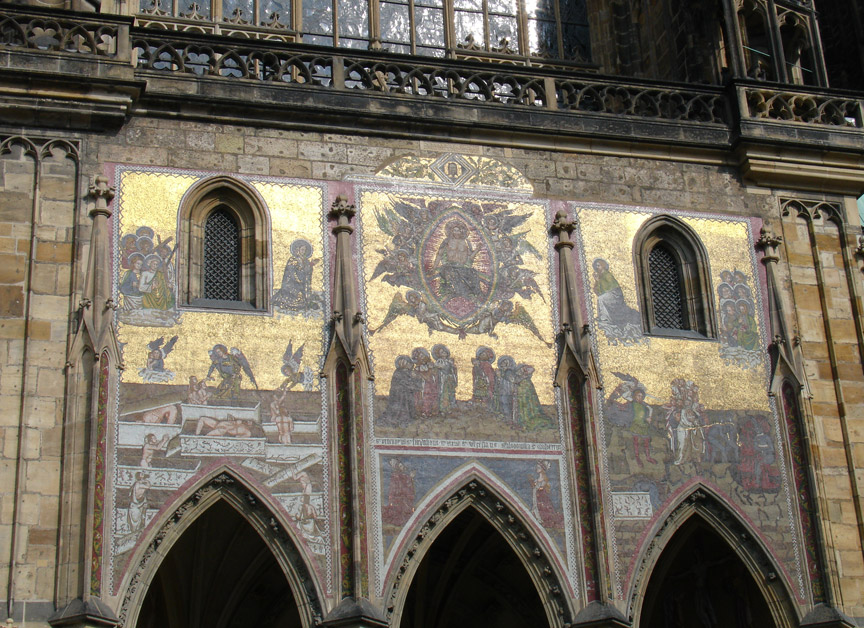