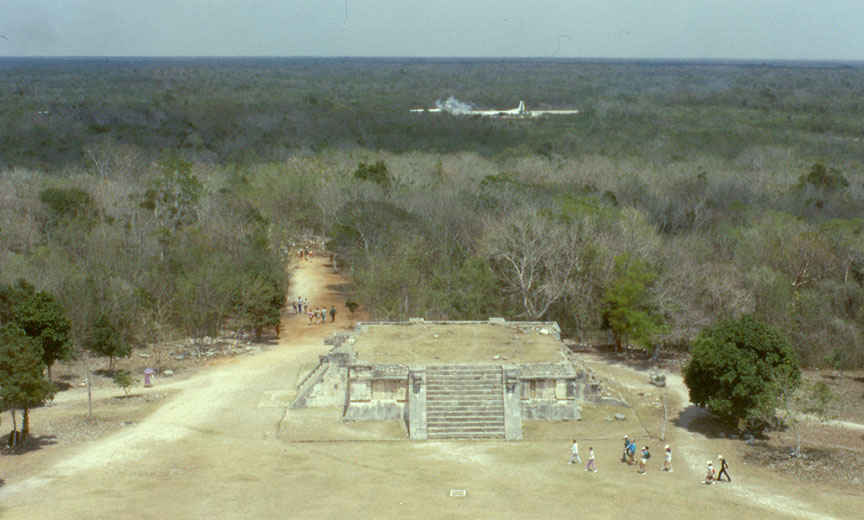 entering the site
(airport clearing in the background)

Chichén Itzá, a ruined ancient Maya city occupying an area of 4 square miles (10 square km) in south-central Yucatán state, Mexico. It is located some 90 miles (150 km) east-northeast of Uxmaland 75 miles (120 km) east-southeast of the modern city of Mérida. The only source of water in the arid region around the site is from wells (cenotes) formed by sinkholes in limestone formations. Two big cenotes on the site made it a suitable place for the city and gave it its name, from chi (“mouths”), chen (“wells”), and Itzá, the name of the Maya tribe that settled there. Chichén Itzá was designated a UNESCO World Heritage site in 1988. 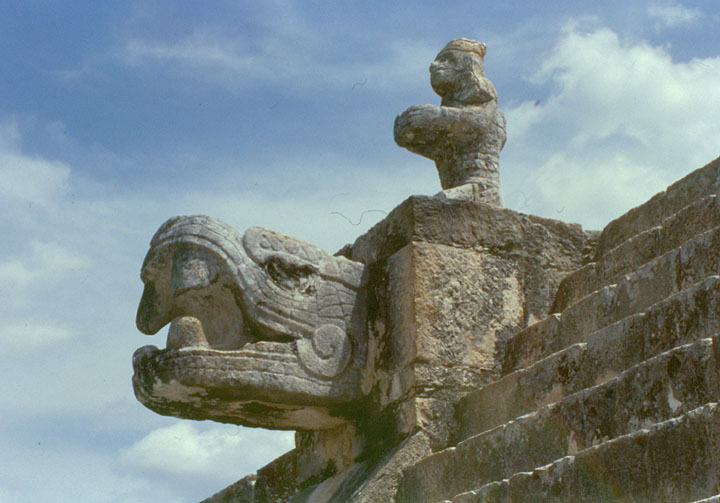 
Chichén was founded about the 6th century AD, presumably by Maya peoples of the Yucatán Peninsula who had occupied the region since the Pre-Classic, or Formative, Period (1500 BC–AD 300). The principal early buildings are in an architectural style known as Puuc, which shows a number of divergences from the styles of the southern lowlands. These earliest structures are to the south of the Main Plaza and include the Akabtzib (“House of the Dark Writing”), the Chichanchob (“Red House”), the Iglesia (“Church”), the Casade las Monjas (“Nunnery”), and the observatory El Caracol (“The Snail”). 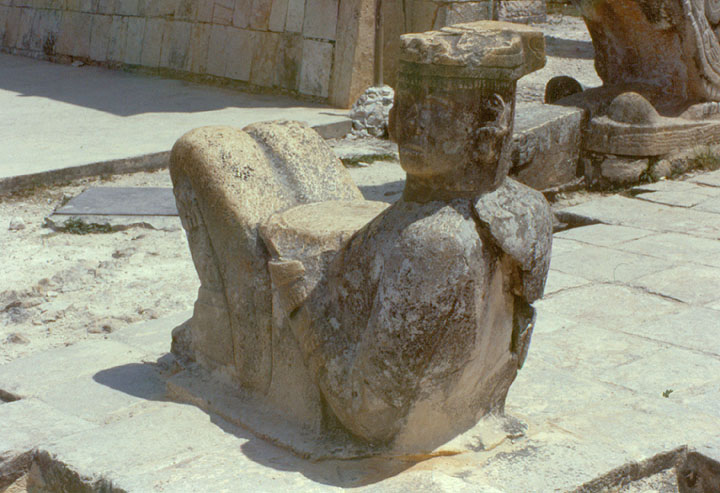 There is evidence that, in the 10th century, after the collapse of the Maya cities of the southern lowlands, Chichén was invaded by foreigners, probably Maya speakers who had been strongly influenced by—and perhaps were under the direction of—the Toltec of central Mexico. These invaders may have been the Itzá for whom thesite is named; some authorities, however, believe the Itzá arrived 200 to 300 years later. 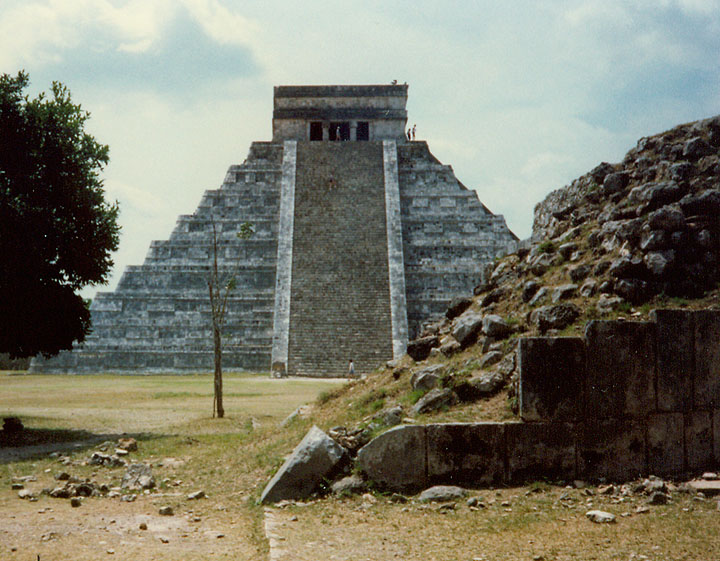 In any event, the invaders were responsible for the construction of such major buildings as the Castillo (the great pyramid), which rises 79 feet (24 metres) above the Main Plaza. The Castillo has four sides, each with 91 stairs and facing a cardinal direction; including the step on the top platform, these combine for a total of 365 steps—the numberof days in the solar year. During the spring and autumnal equinoxes, shadows cast by the setting sun give the appearance of a snake undulating down the stairways. 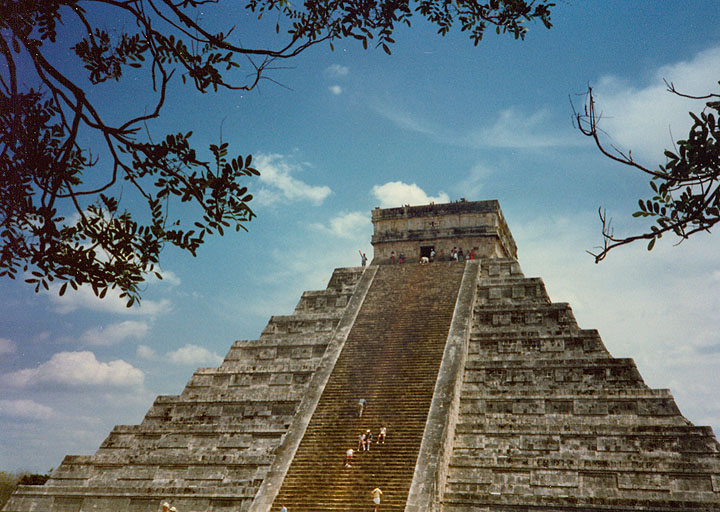 A carving of a plumed serpent at the top of the pyramid is symbolic of Quetzalcóatl (known to the Maya as Kukulcán), one of the major deities of the ancient Meso-American pantheon. Excavations within the nine-platform pyramid revealed another, earlier structure containing a red jaguar throne studded with jade. 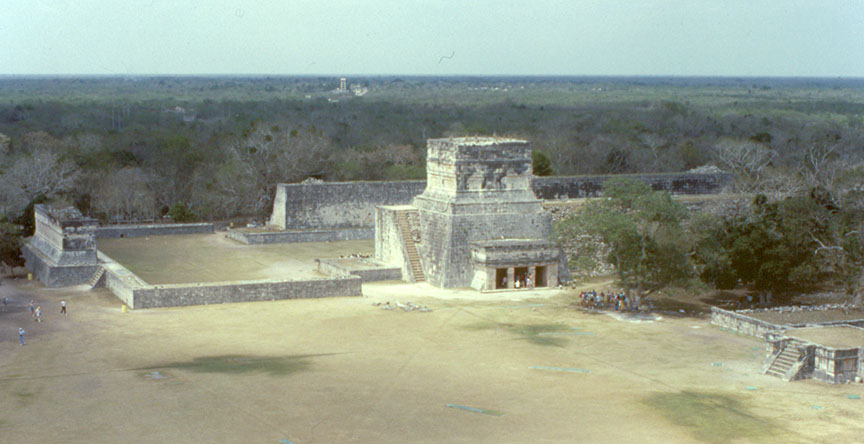 ball court as seen from the Castillo 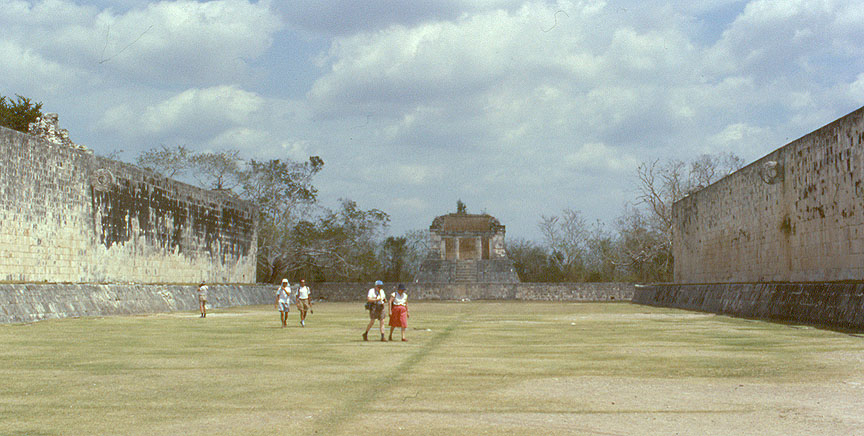 inside the ball court 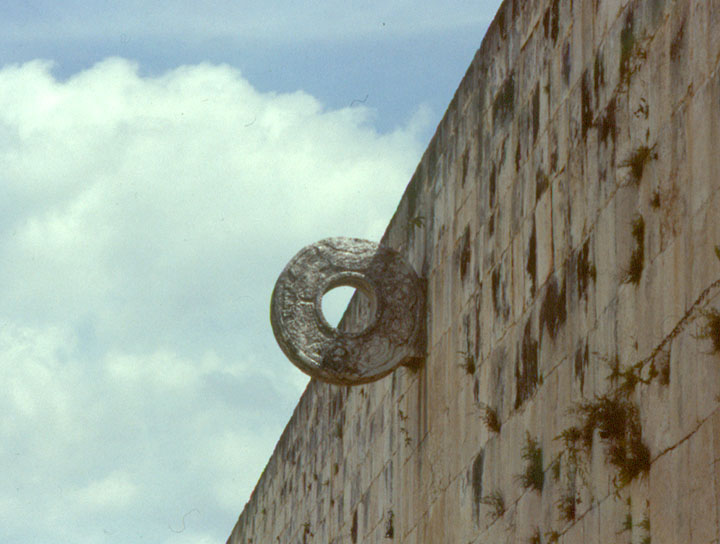 The ball court (for playing the game tlachtli [Mayan: pok-ta-pok]), is 545 feet (166 metres) long and 223 feet (68 metres) wide, the largest such court in the Americas. Six sculpted reliefs run the length of the walls of the court, apparently depicting the victors of the game holding the severed head of a member of the losing team. On the upper platform at one end of the court stands the Temple of the Jaguars, inside of which is a mural showing warriors laying siege to a village. Standing on the platform of the temple to the north of the court, it is possible to hear a whisper from 150 feet (46 metres) away. 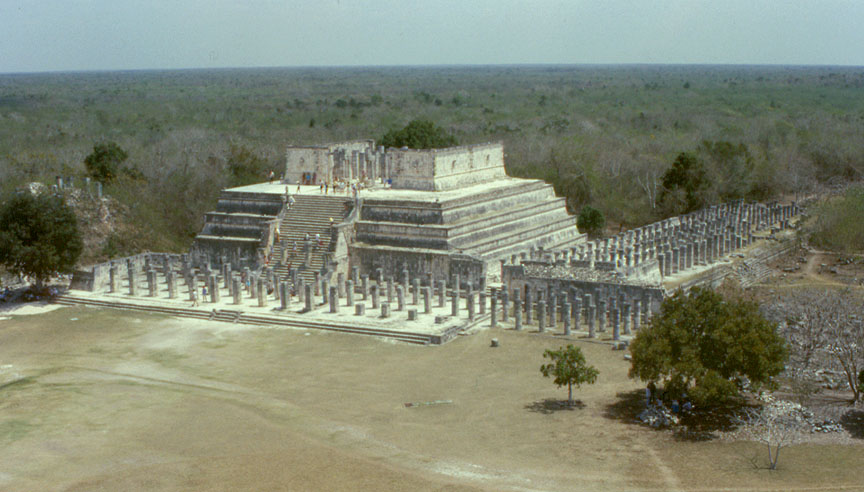 Temple of the Warriors

Other structures include the High Priest's Grave and the Colonnade (Thousand Columns) and the adjoining Temple of the Warriors. Most of these buildings probably were completed in the Early Post-Classic Period (c. AD 900–1200). In the Late Post-Classic Period (c. 1200–1540), Chichén appears to have been eclipsed by the rise of the city of Mayapán. For a time Chichén Itzá joined Uxmal and Mayapánin a political confederacy known as the League of Mayapán. 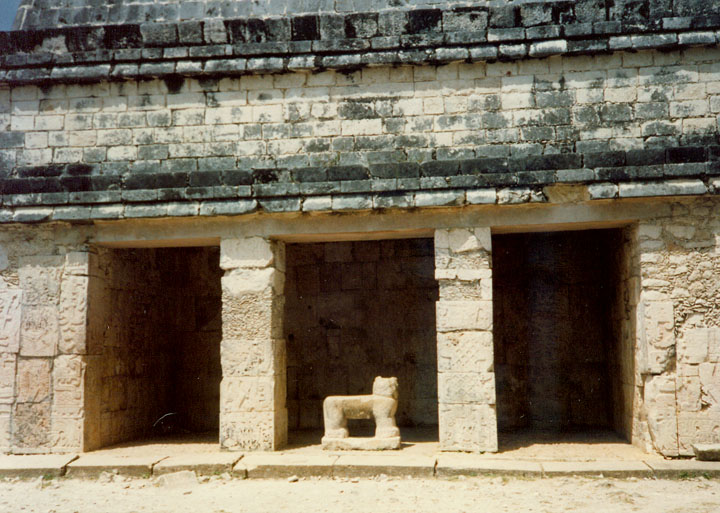 temple with figure of Chac-Mool

About 1450 the League and the political supremacy of Mayapán dissolved. When the Spanish entered the country in the 16th century, the Maya were living in many small towns, but the major cities, including Chichén, were largely abandoned. 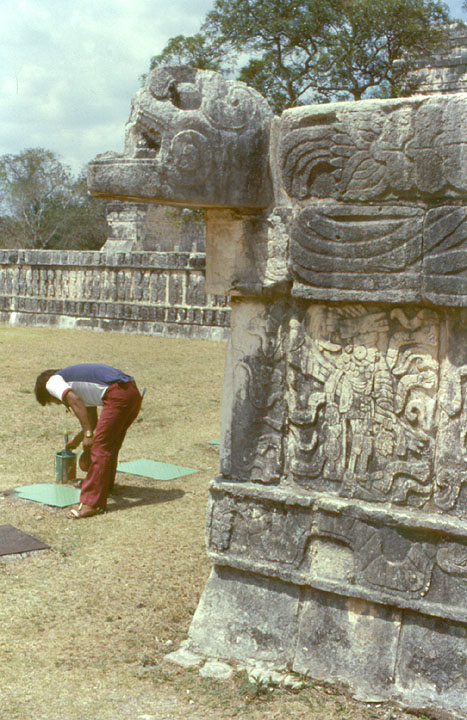 Long left to the jungle, Chichén Itzá remained sacred to the Maya. Excavation began in the 19th century, and the site became one of Mexico's prime archaeological zones. 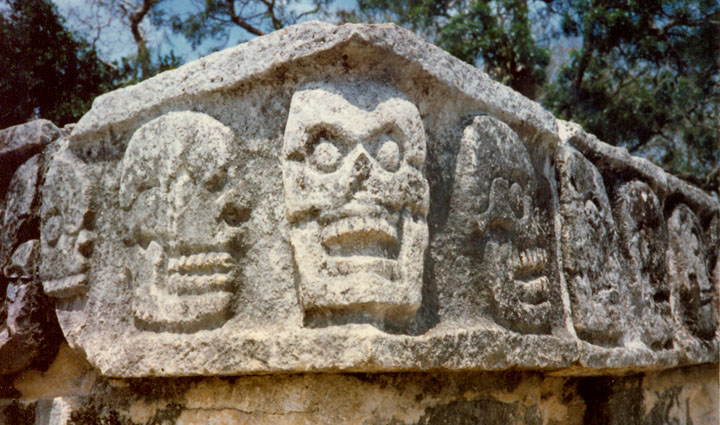 A legendary tradition at Chichén was the Cult of the Cenote, involving human sacrifice to the rain god, in which victims were thrown into the city's major cenote (at the northernmost part of the ruin), along with gold and jade ornaments and other valuables. In 1904 Edward Herbert Thompson, an American who had bought the entire site, began dredging the cenote; his discovery of skeletons and sacrificial objects confirmed the legend.

Text from the Encyclopedia Britannica 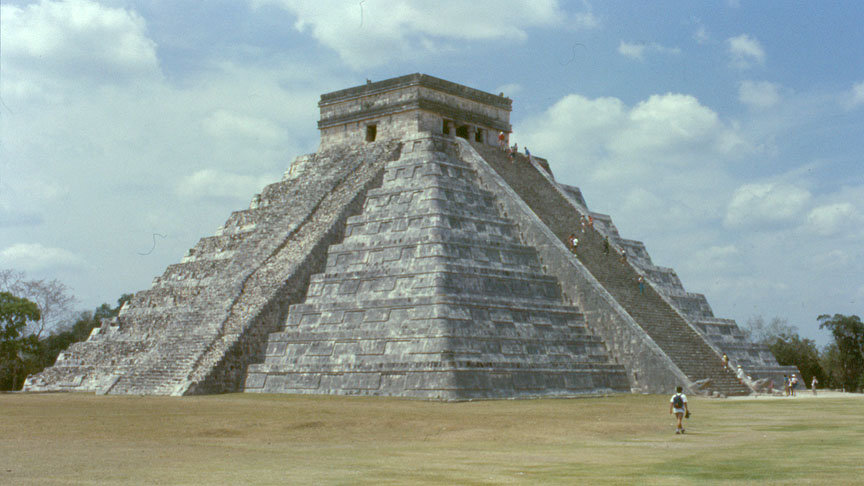 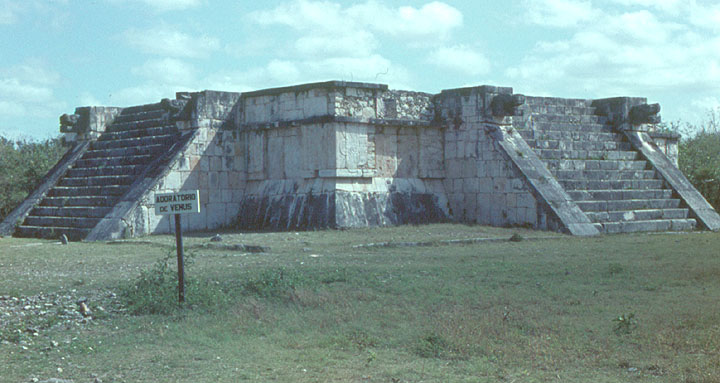 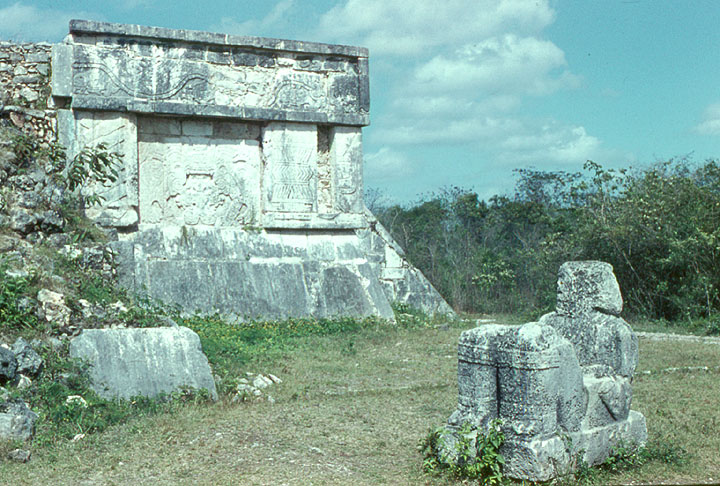 platform corner and a Chac-Mool figure