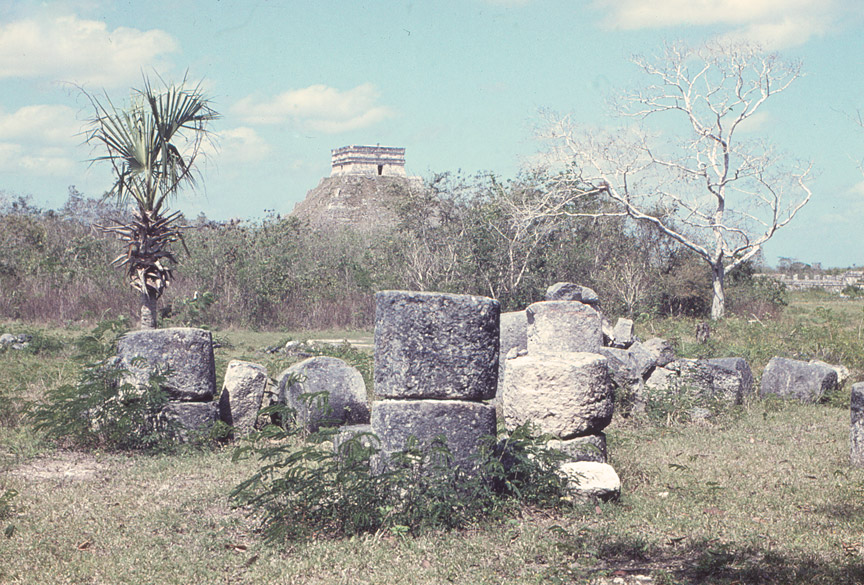 Chichén Itzá, most important city of the Maya peoples, now an archaeological site, 29 km (18 mi) southwest of Valladolid, Mexico, in the northern part of the Yucatán Peninsula. The name, meaning "Mouth of the Wells of Itzá," is derived from the Itzá tribe of Mayan Native Americans that formerly occupied it and from the two natural wells that supplied the city with water; the religious and cultural life of the city was centered on those wells. 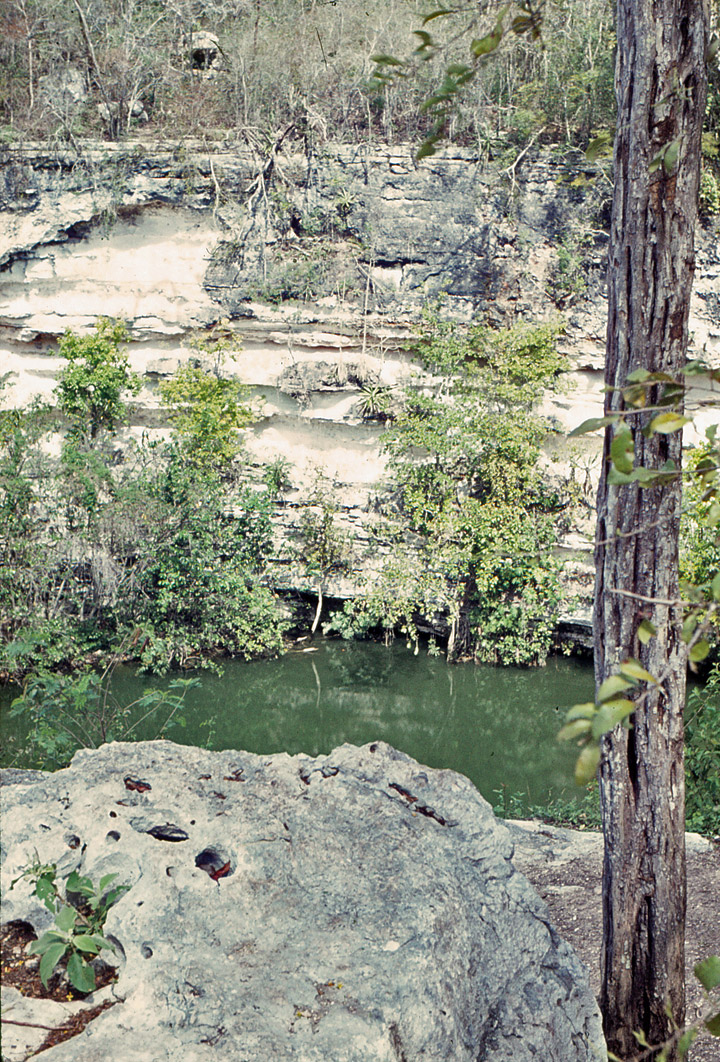 Chichén Itzá was founded early in the 6th century AD and abandoned about the year 670. Rebuilt some 300 years later, when the Itzá returned to the region, it became the most important city of northern Yucatán and a center of Mayan culture. The architecture of this period shows Toltec influence, but it is unclear how that influence gained hold in Chichen Itzá. The city finally fell in around 1200. Subsequently, the Itzá appear to have been a part of an alliance in the Postclassic center of Mayapán, which itself collapsed in the century before the Spanish conquest. 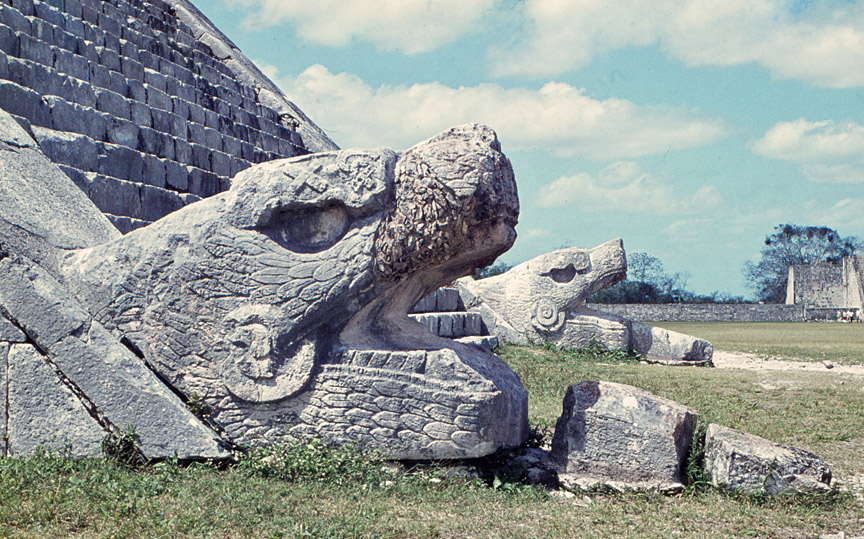 The principal ruins cover an area of about 3 sq km (about 1 sq mi). The general structural type is that of the platform pyramid, ascended by means of broad stairways leading to vaulted chambers, the walls of which are covered with sculptured figures and hieroglyphic inscriptions or vividly colored paintings resembling the Aztec codices. 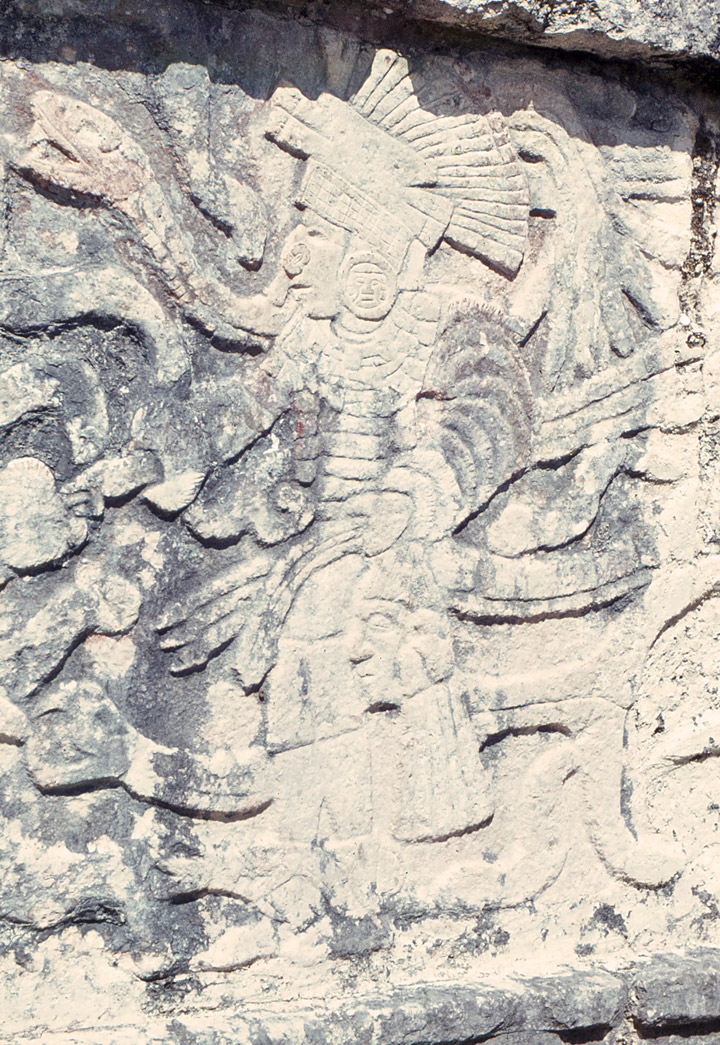 Each prominent structure is known by a distinct name, such as the Ball Court that was used for symbolic religious games. It is formed of two parallel walls, each 83 m (274 ft) long and 9 m (30 ft) thick, standing 36 m (120 ft) apart. Projecting from each wall 7 m (25 ft) above the ground is a sculptured ring of stone in the form of two entwined serpents. During the game the players attempted to send the ball through the ring. 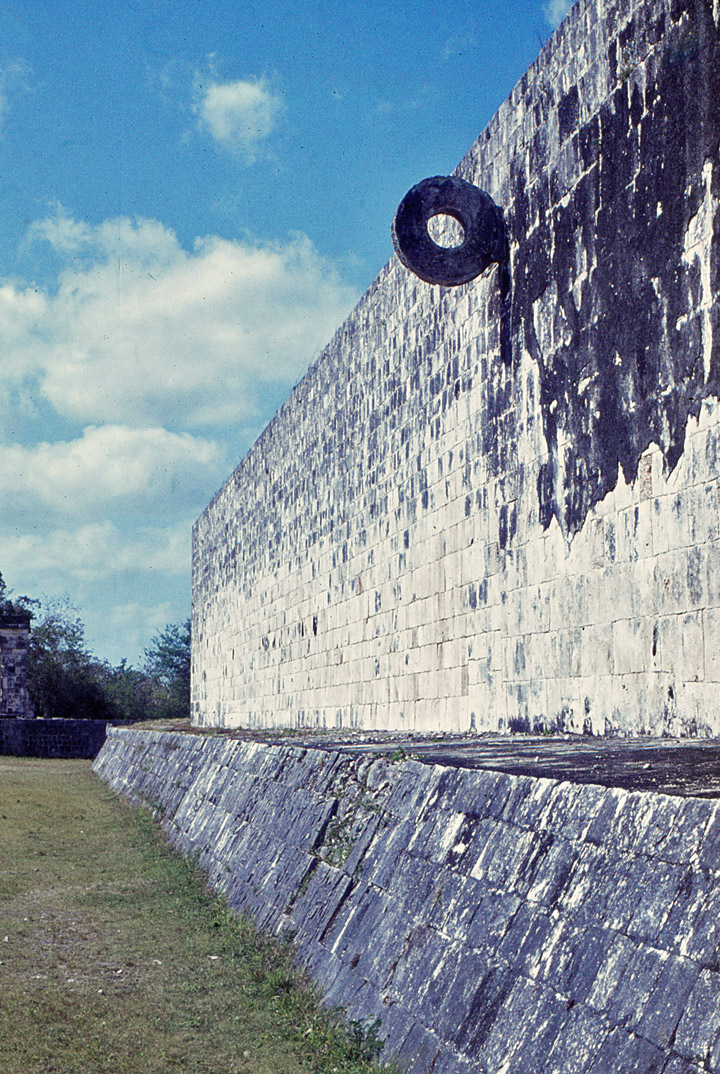 side wall of the ball court

Another important ruin is El Castillo, a large temple on a pyramidal mound 0.4 hectares (1.0 acre) in area and rising to a height of 30 m (100 ft), with staircases leading up on four sides to the temple of Kukulcan at the top. 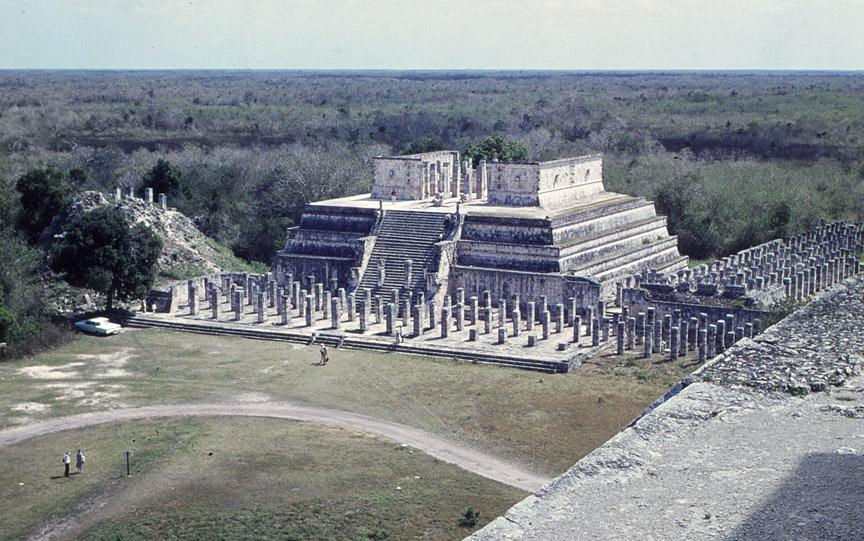 The Palace or Nunnery (Casa de las Monjas), the Sacred Well, the Temple of the Warriors, and the Caracol or Round Tower, probably an astronomical observatory, are among the other notable ruins. 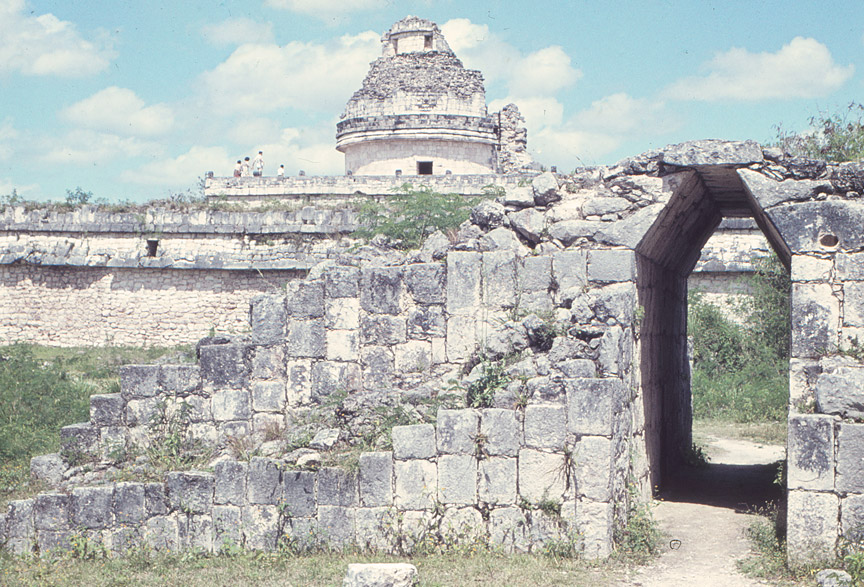 Mayan Arch with Caracol in background 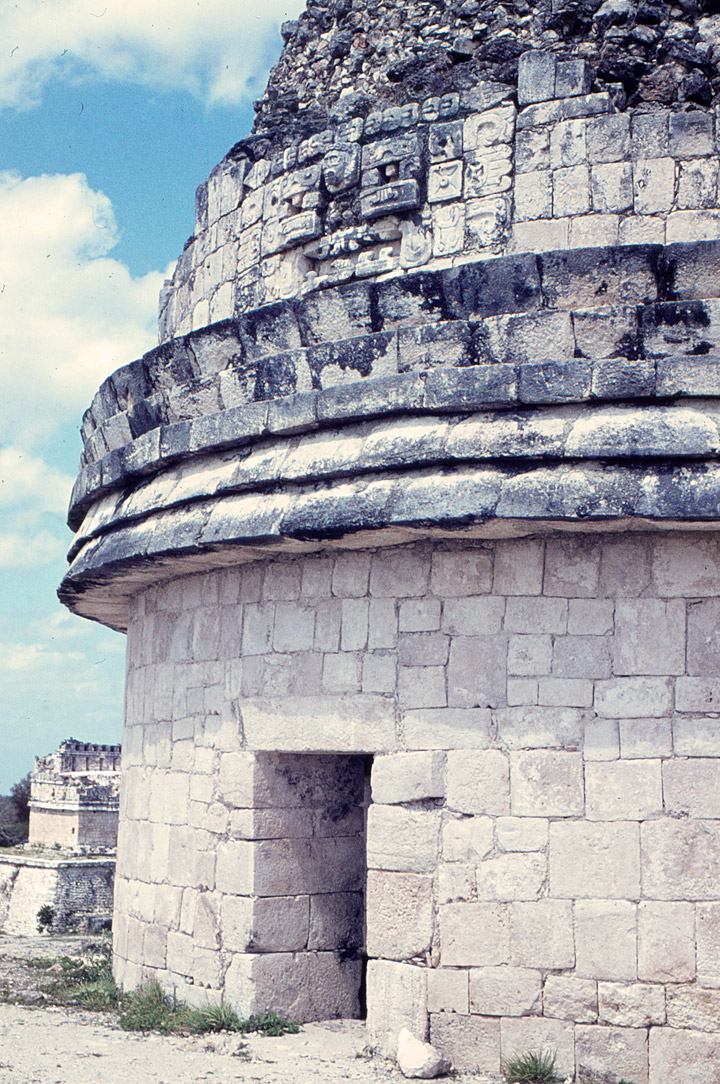 Close view of Round Tower 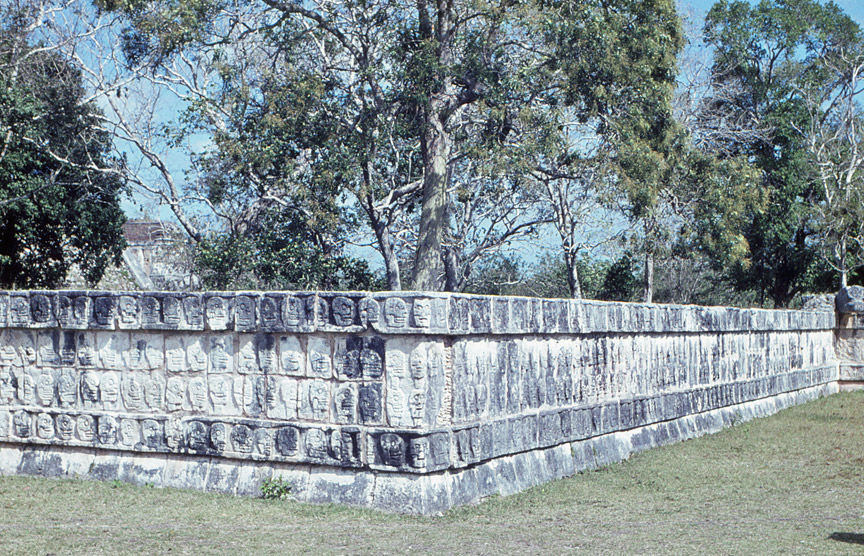 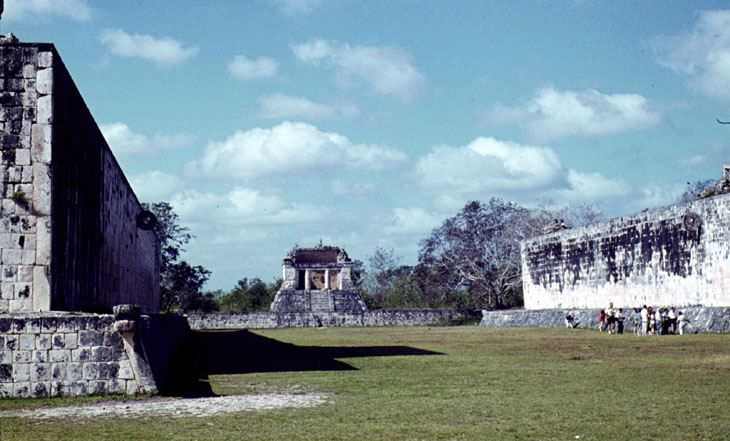 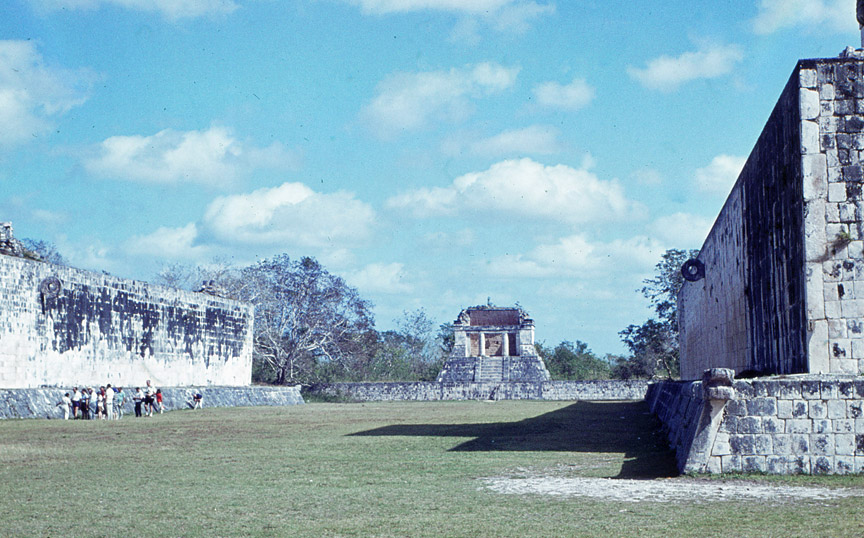 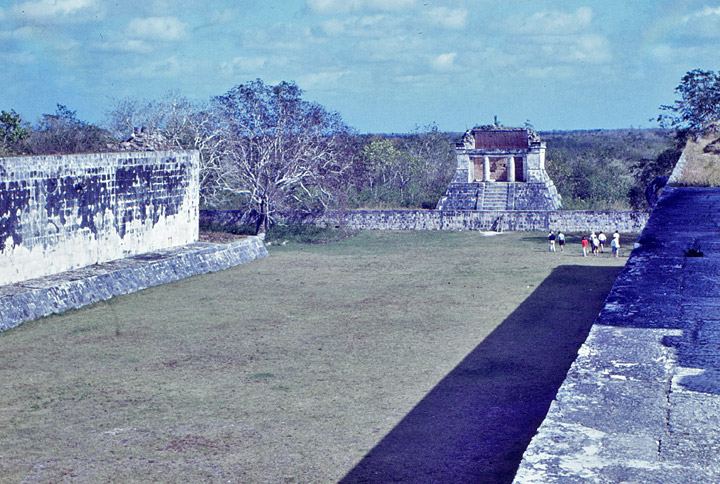 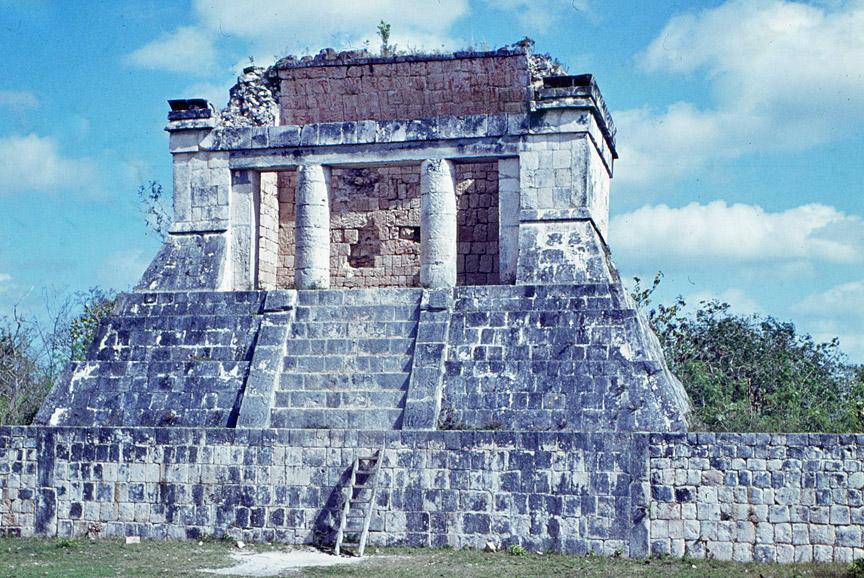 at the end of the ball court 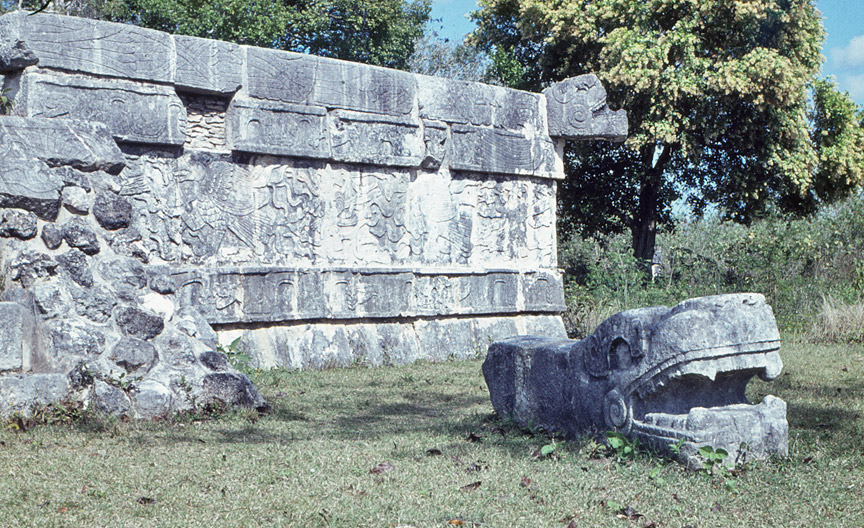 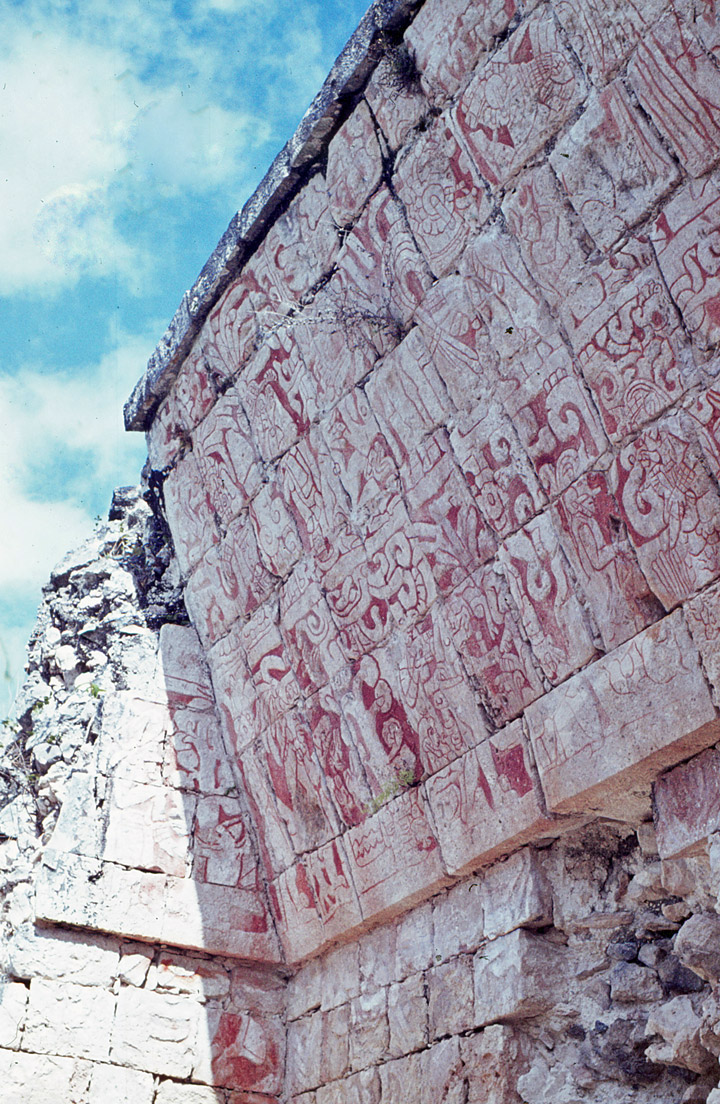 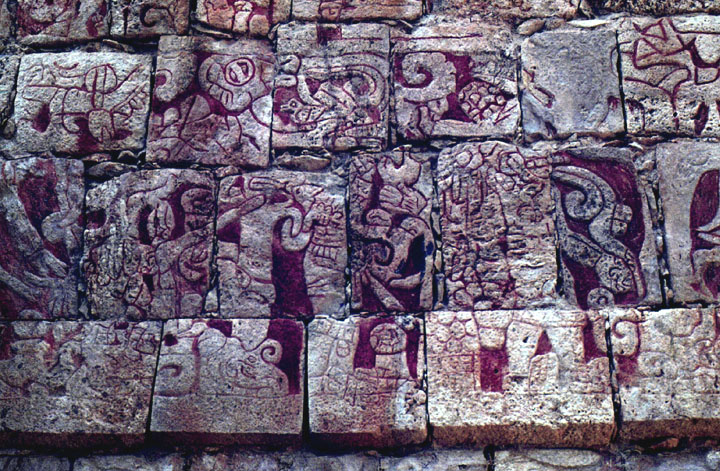 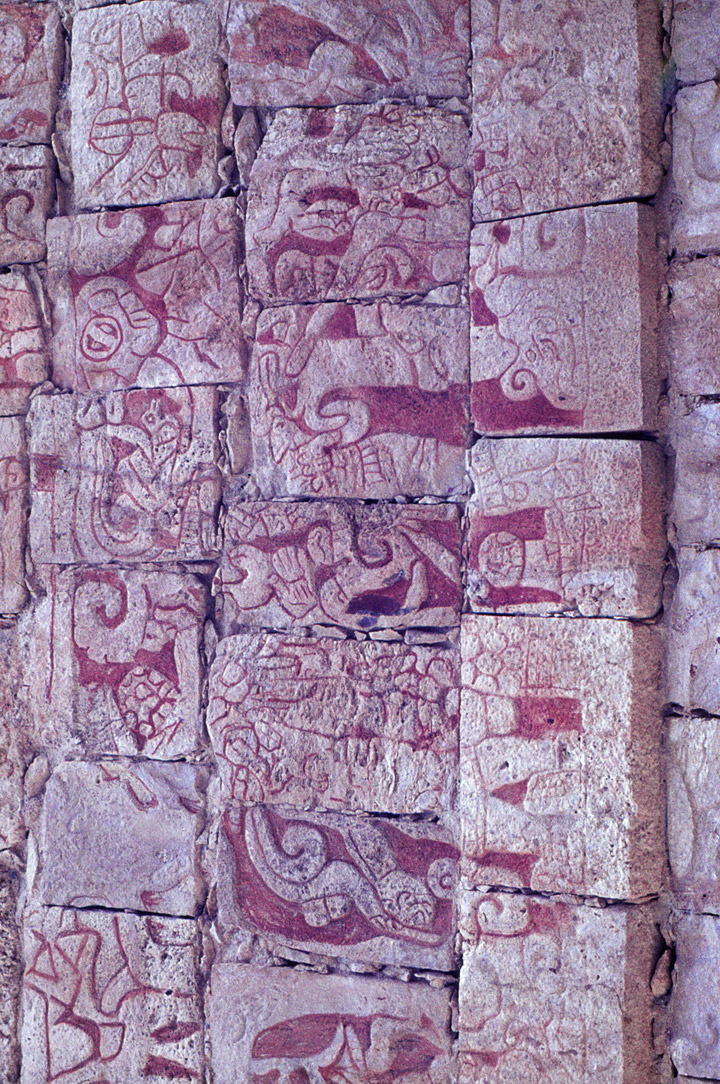 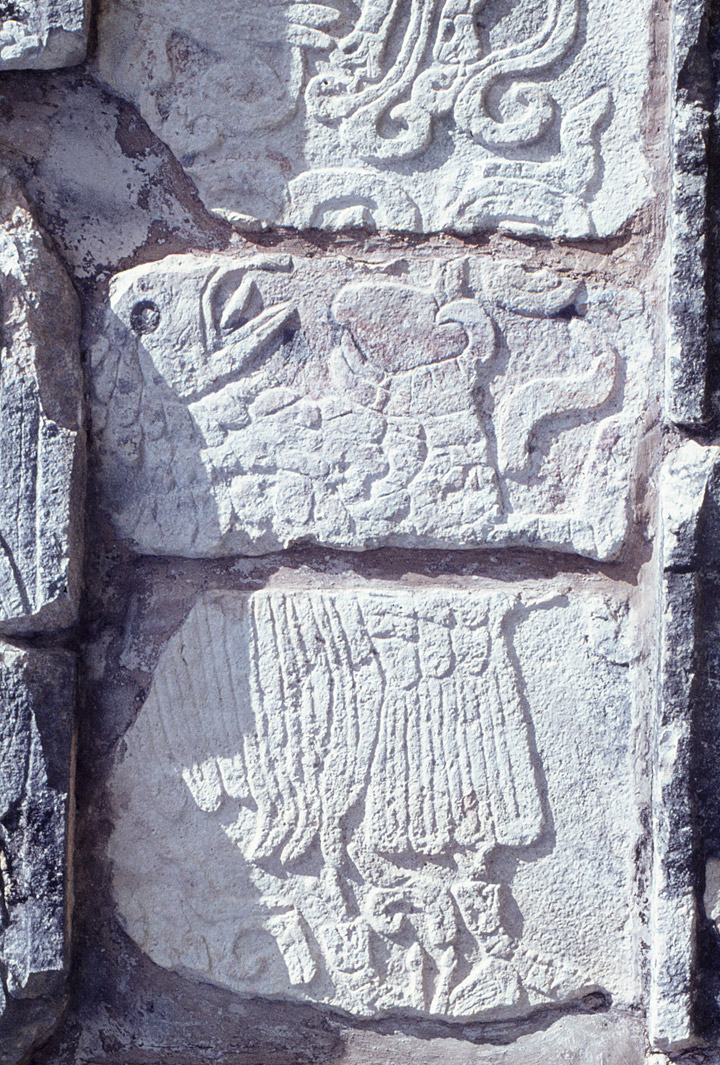 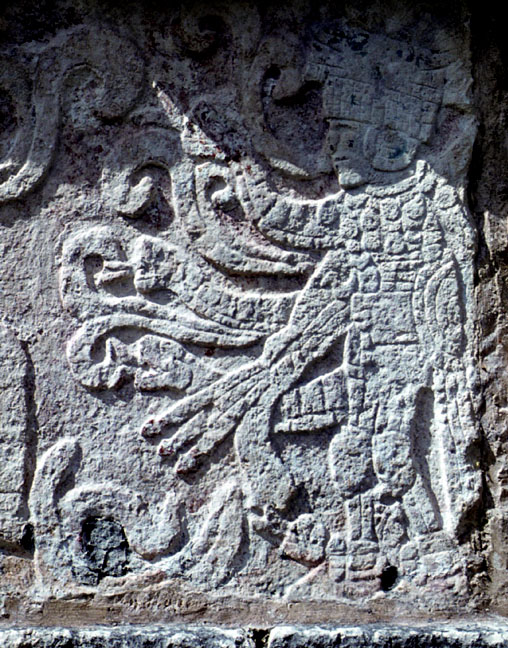 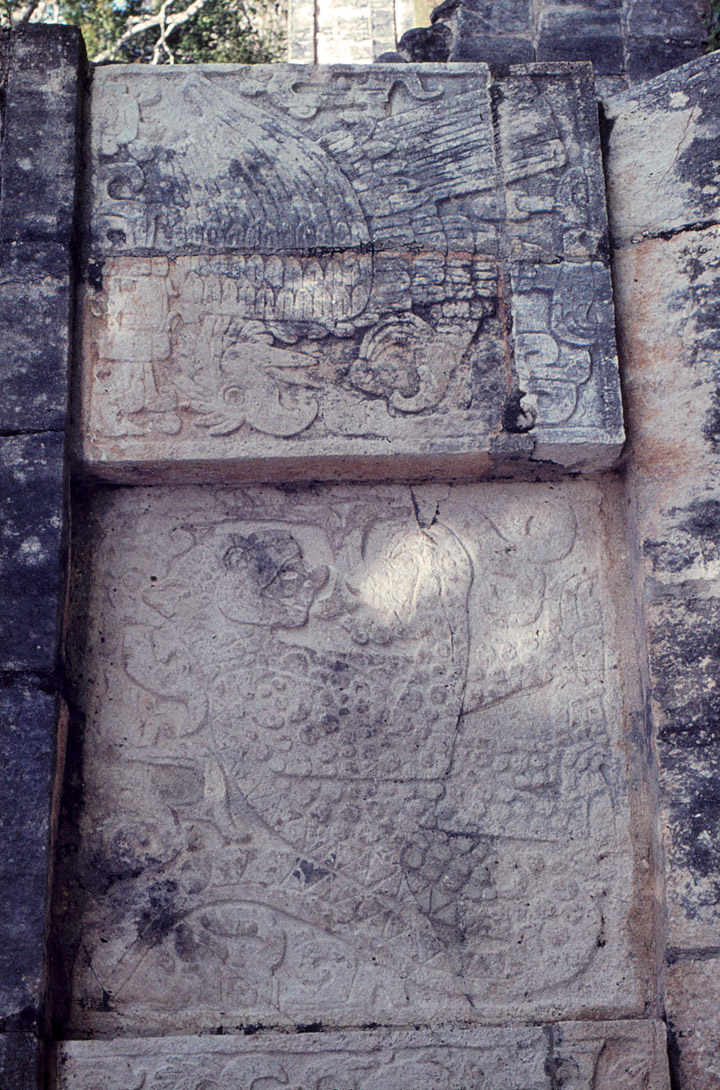 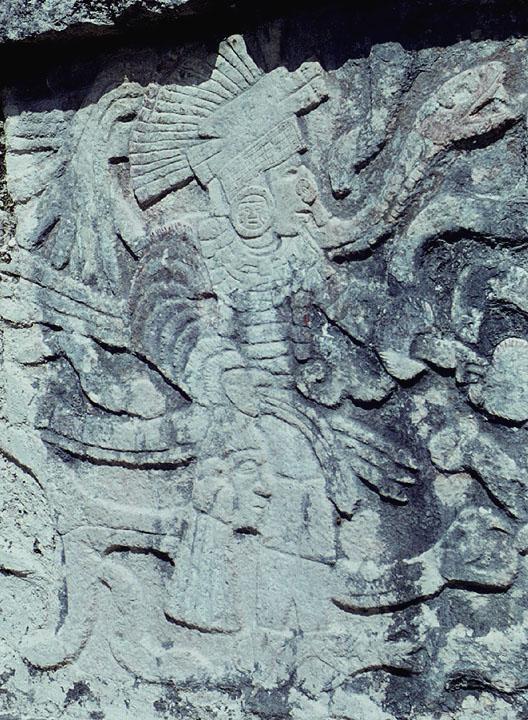 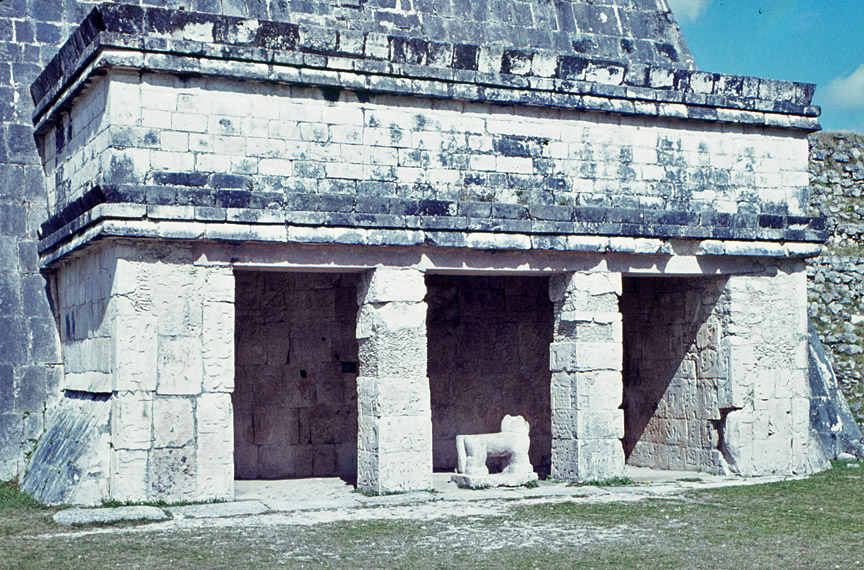 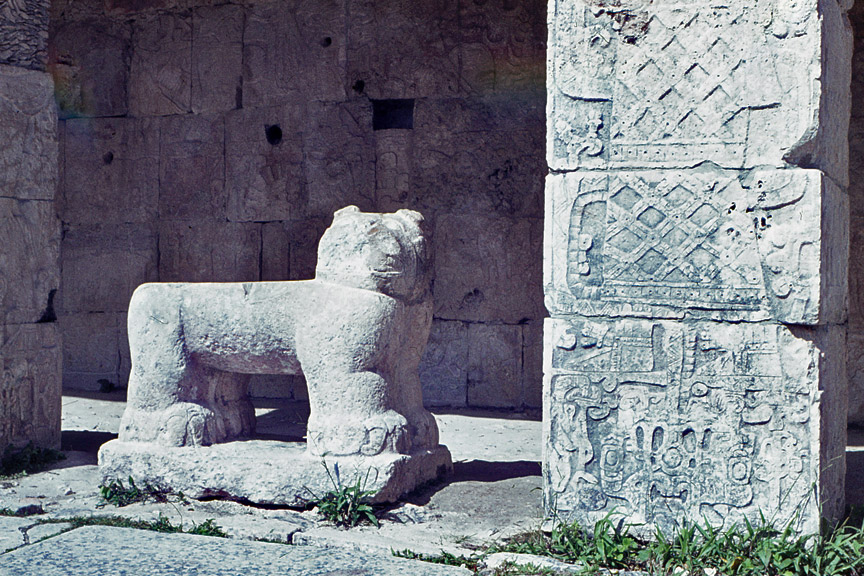