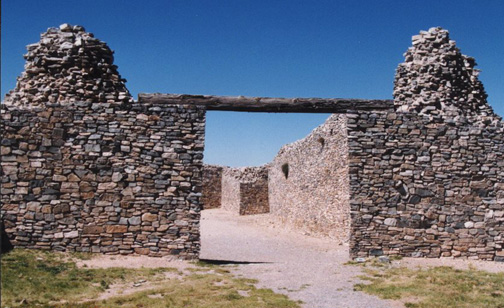 In the stones of the Salinas Valley pueblo ruins are the faint echoes of the communities that lived there three centuries ago. Before they left the area in the 1670s. Pueblo Indians forged a stable agricultural society whose members lived in apartment-like complexes and participated, through rule and ritual, in the cycles of nature. Two ancient southwestern cultural traditions - the Anasazi and Mogollon - overlapped in the Salinas Valley to produce the later societies at Abdi, Gran Quivira, and Ouarai. These traditions had roots as far back as 7,000 years ago and were themselves preceded by nomadic Indians who arrived perhaps as many as 20,000 years ago. 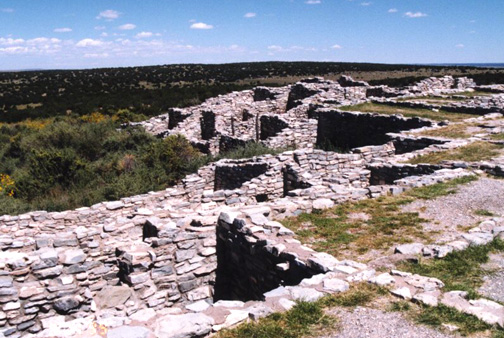 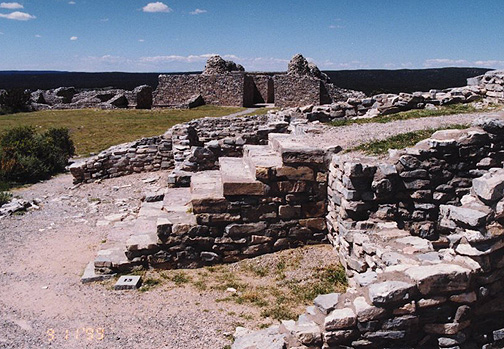 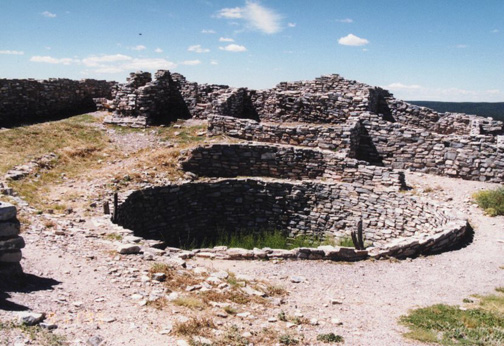 As the southwestern cultures evolved, better agricultural techniques from Mexico and the migration of Tompiro- and Tiwa- speaking peoples from the Rio Grande spurred the growth of settlements in the Salinas Valley. By the 10th century, substantial Mogollon villages flourished here. The dwellers practiced minimal agriculture supplemented by hunting and gathering, made a simple red or brown pottery, and lived in pit houses and, later, above- ground jacales of adobe-plastered poles. By the late 1100s the Anasazi tradition from the Colorado Plateau, introduced through the Cibola (Zuni) district and Rio Grande pueblos, began to assimilate the Mogollon. The contiguous stone-and-adobe homes of the Anasazis represented the earliest stage of the pueblo society later encountered by the Spanish. Over the next few hundred years the Salinas Valley became a major trade center and one of the most populous parts of the Pueblo world, with perhaps 10,000 or more inhabitants in the 17th century. Located astride major trade routes, the villagers were both producers and middlemen between the Rio Grande villages and the plains tribes to the east. They traded maize, pinion nuts, beans, squash, salt, and cotton goods for dried buffalo meat, hides, flints, and shells.

By 1300 the Anasazi culture was dominant, although the Salinas area always lagged behind the Anasazi heartland to the north in cultural developments. Brush-and-mud jacates had evolved into large stone complexes, some with hundreds of rooms, surrounding kiva-studded plazas. Besides the plants already mentioned, the inhabitants ate wild plants, raised turkeys, and hunted rabbits, deer, antelope, and bison. They wore breech cloths. bison robes, antelope and deer hides, and decorative blankets of cotton and yucca fiber. Turquoise and shell jewelry. obtained by trade, brightened rituals. The Spaniards were impressed by the Pueblos' weaving, basketmaking, and fine black-on-white pottery, a technique the Salinas people borrowed from the Rio Grande pueblos. The Salinas pueblo dwellers were an adaptable people who drew what was useful from more advanced groups. But strong influences from the Zuni district, the Spanish explorers, and deteriorating relations with the Apaches to the east radically altered pueblo life. In the 1670s the Salinas villages were abandoned, and their peoples dispersed. 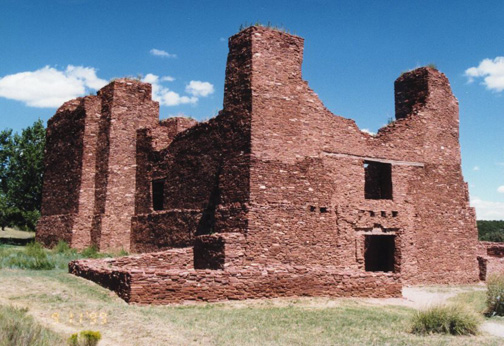 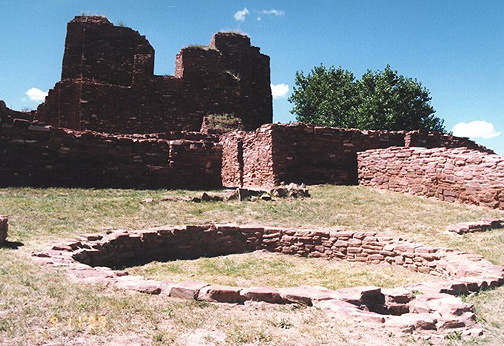 The Coming of the Spaniards

Soon after Spain had conquered and colonized Mexico, tales of great wealth to the North drew explorers to New Mexico. Coronado's expedition in 1540 failed to turn up the fabled land of Quivira, although the name and story lingered on. In 1598 a party led by Juan de Onate came to New Mexico to plant a permanent colony. He called salt, which was abundant in Salinas, "one of the four riches of New Mexico," but the other expected riches-especially mines-failed to materialize. Agriculture too proved difficult in the harsh climate. Relations with the Indians soured when the soldiers attempted to collect tribute to the Crown. Spain finally concluded that New Mexico would never be profitable. However, the Pope had charged the Spanish Crown with Christianizing the natives of the New World. Phillip II therefore decided to maintain the colony, partly at the Crown's expense. as primarily a missionary effort. While many of the Franciscan missionaries were sincere and well-intentioned, the overlapping privileges granted to the church and civil authorities inevitably led to conflict between the Franciscans and the governors. Without the natural riches of some other colonies, the governors relied on profits from the sale of slaves captured in raids on Plains tribes and from goods produced by Indian labor. 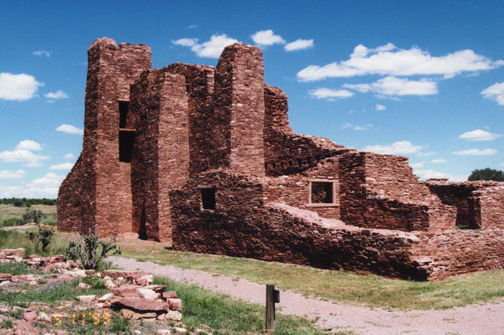 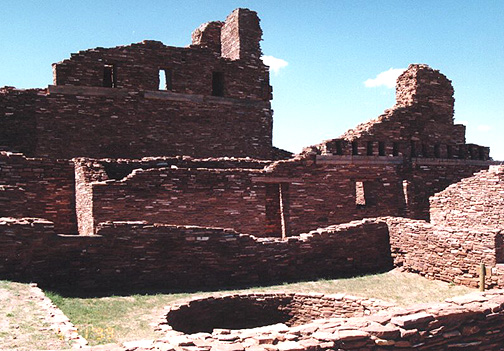 kiva next to Mission church

Relations with the pueblos were determined mainly through the encomienda system, in which ranking citizens (encomenderos) were appointed by the governor to provide protection, aid, and education to Indians and military support for the government in return for the privilege of collecting tribute. But the system was abused, and New Mexico was too remote for the exploitation to be checked by higher authorities. The Franciscans tried to lighten the burden on the Indians, but the settlers and government refused to give up the profitable arrangement, and in any case, the friars themselves placed heavy demands on the pueblos to support the missions. Still, some changes brought by the Spanish were beneficial. Wheat and wheat bread, fruit trees, and grapes were introduced. Cattle, goats, and sheep became a fixed part of the economy. Craftsmen began working metal.

In the end, however, cultural conflict and natural disaster devastated the Salinas pueblos. The Apaches, formerly trading partners, now raided the pueblos for food and in retribution for Spanish slave raids in which Pueblo Indians had participated. The Pueblos might have survived the raids, but they-and the Apaches and Spaniards- were hit during the 1660s and '70s with drought and wide-spread famine that killed 450 people at Gran Ouivira alone. Recurring epidemics further decimated the populace, which had little resistance to introduced diseases. The ability of the pueblos to withstand these disasters may have been weakened by the disruption of their culture under Spanish rule. In any event, the Salinas pueblos and missions were abandoned during the 1670s, and the surviving Indians went to live with cultural relatives in other pueblos. In 1680 the pueblos north of Salinas, in an uncharacteristic show of unity, revolted and expelled the Spaniards from New Mexico. In the general exodus of Indians and Spaniards, the Piro and Tompiro survivors of the Salinas pueblos moved south with the Spaniards to the El Paso area. They were absorbed by Indian communities there, making them the only linguistic group among the Pueblo Indians during the historic period to lose their language and their homeland.