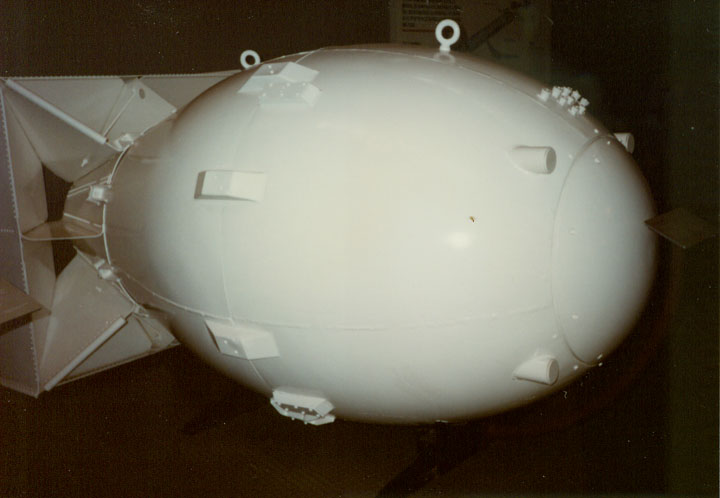 Los Alamos, city, seat of Los Alamos County, central New Mexico, on Pajarito Plateau overlooking the Río Grande Valley; incorporated 1968. Principally a research center, the city is the site of Los Alamos National Laboratory. Los Alamos is also the site of a junior college, the Bradbury Science Museum, and the Fuller Lodge Art Center, which includes the Los Alamos Historical Museum, an arts center, and a performing arts facility. Bandelier National Monument and Jemez State Monument, both featuring Native American Pueblo ruins, are nearby. During World War II the site was chosen by the U.S. government for nuclear weapon research, and the first atomic bomb was developed here. The community subsequently was under the control of the Atomic Energy Commission from 1947 until 1962, when it became self-governing; during this period the first hydrogen bomb was designed here. The city's name is Spanish for "the poplars." 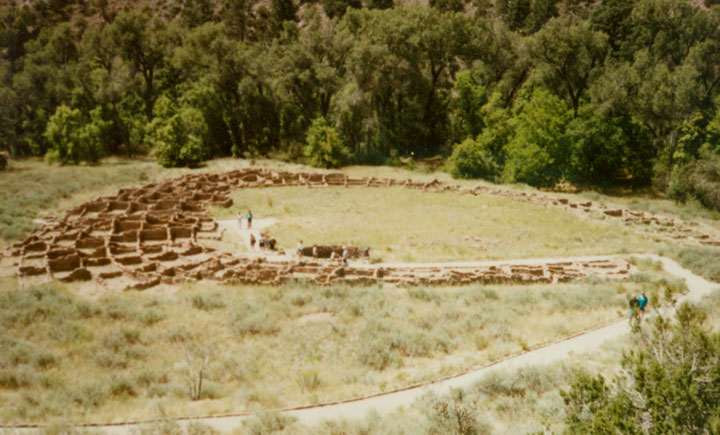 Tyuonyi, the circular two-story Pueblo in the bottom of Frijoles Canyon

Best known for mesas, sheer-walled canyons, and the ancestral Pueblo dwellings found among them, Bandelier also includes over 23,000 acres of designated Wilderness. It was named for Adolph Bandelier, a 19th-century anthropologist. Proclaimed on February 11, 1916 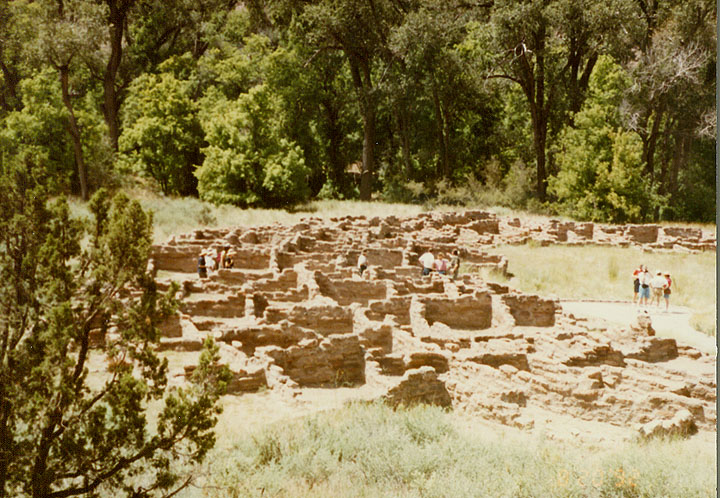 Several thousand years ago, the Pajarito Plateau was used by mobile Paleo-Indian hunters, and later by Archaic hunter-gatherers, who wandered through the canyons seeking game and wild plants. 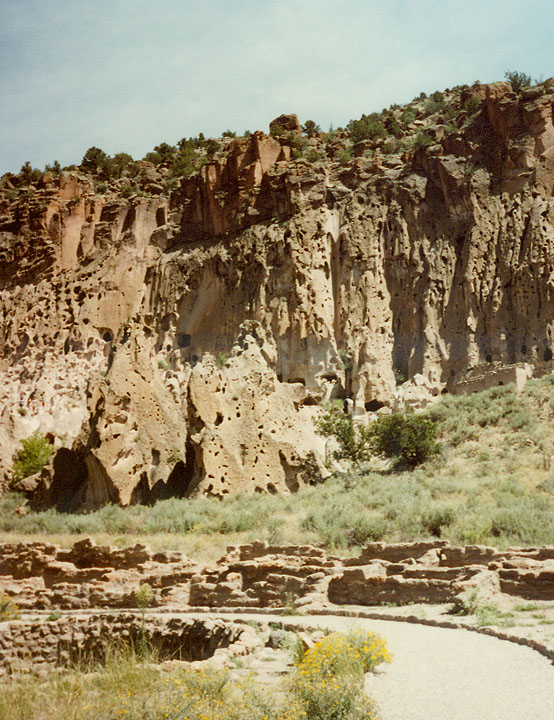 round kiva in front of the square dwellings in the Tyuonyi

About 2,000 years ago, small family groups of Anasazi moved into the canyon occupying pit houses and cultivating corn, beans and squash. Pottery, and architecture slowly evolved in this region as it did throughout other Anasazi locations in the Southwest, but people continued living in small scattered settlements of one or two families. 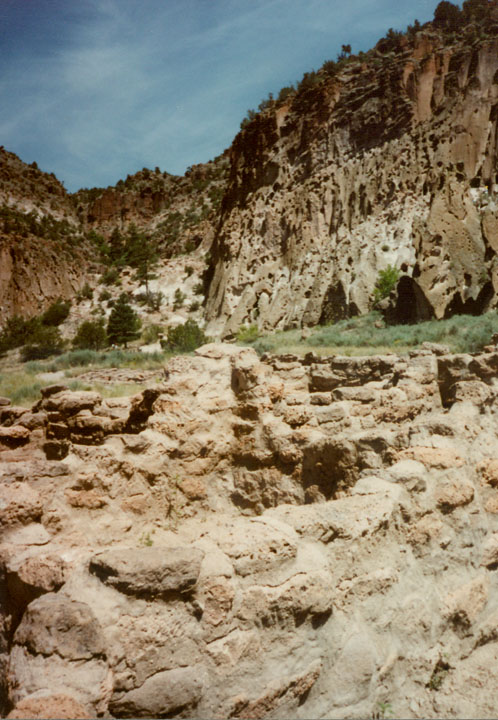 walls of the valley floor dwellings

About 800 years ago, there appeared a sudden influx of people, perhaps migrating from dryer areas of the Four Corners. People began living together in much larger groups creating villages (pueblos) with as many as 40 rooms. 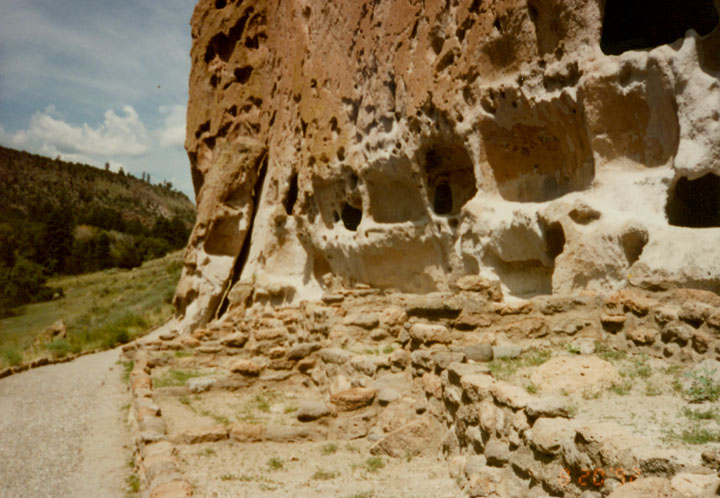 This increase in population marked a cultural explosion. The Anasazi here began employing crude topols to scoop out dwellings from the soft volcanic tuff walls of the Pajarito Plateau fronting cave-like with multistory masonry buildings supported by wooden beams. These villages can be seen today for more than a mile along the talus slopes of Frijoles Canyon. 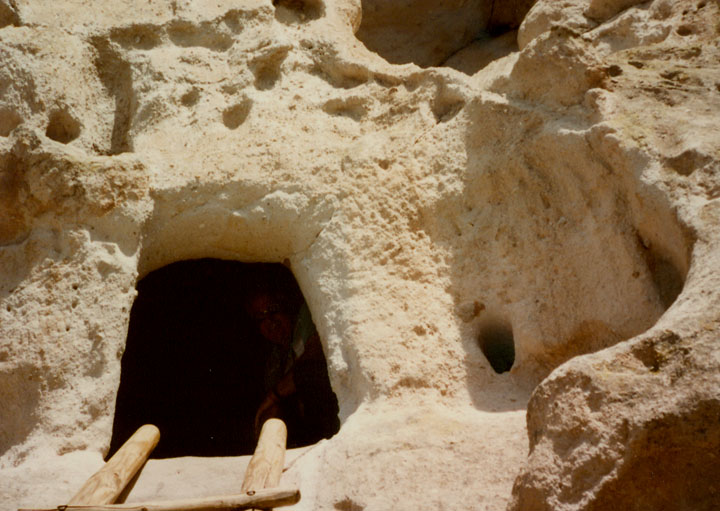 In the 13th century, the Anasazi constructed Tyuonyi, the circular two-story Pueblo in the bottom of Frijoles Canyon, just behind the Monument's Visitor Center. This high-walled village boomed in the 15th century, housing as many as 100 people.

About 1500, with the emergence of the Spanish into the Desert Southwest, the residents left the canyon, never to return. Their descendants probably lived in Cochiti and San lldefonso pueblos a few miles east on the Rio Grande River. 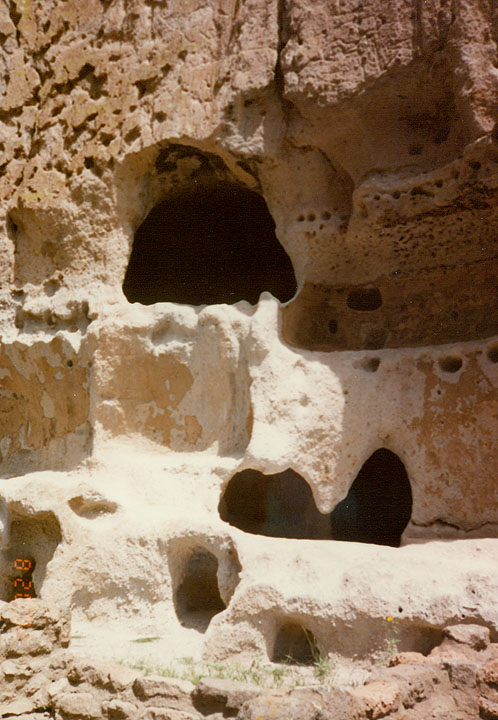 Subsequent archeological surveys have revealed thousands of sites throughout the plateau.

Adolph F.A. Bandelier was born in Switzerland in 1840 and raised in Illinois. In 1880, this 40-year-old self-taught anthropologist-historian came to the New Mexico Territory under sponsorship of the Archeological Institute of America. His goal was to trace the social organization, customs and movements of the Southwestern and Mexican peoples.

Bandelier traveled and studied the canyons and mesas throughout the region, speaking with many indigenous people and visiting 166 ruins in New Mexico, Arizona and Mexico. In 1880, men from Cochiti Pueblo guided Bandelier to their nearby ancestral homes in Frijoles Canyon. When he came upon the ancient pueblo ruins, he is reported to have exclaimed, "This is the grandest thing I ever saw." 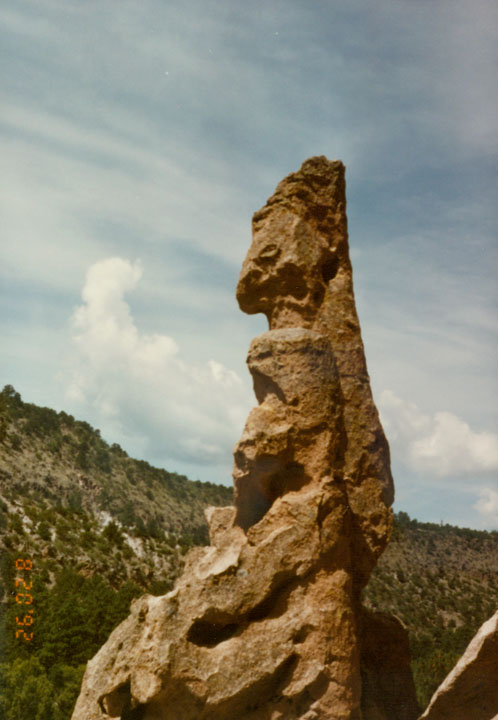