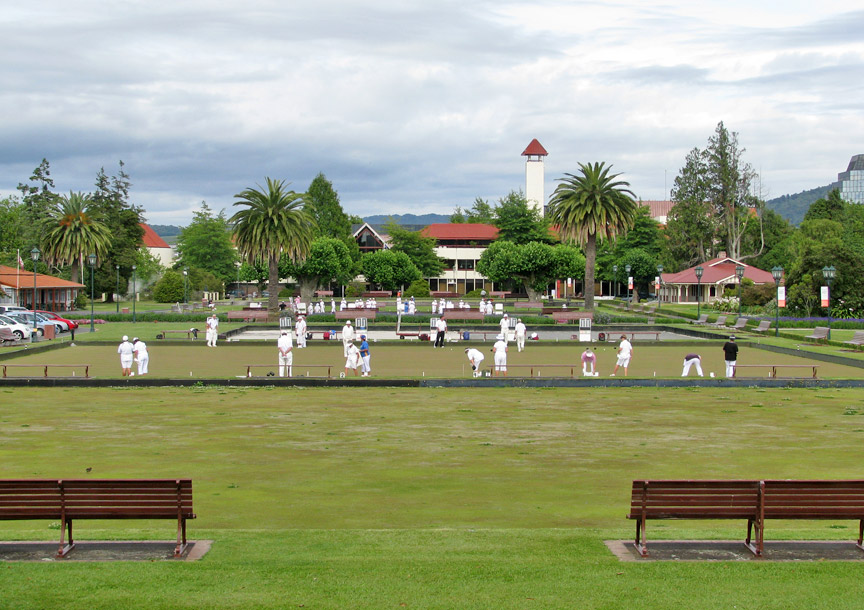 Bowls is a sport in which the goal is to roll slightly asymmetric balls, called bowls, closest to a smaller—normally white—bowl called the "jack" or "kitty". Bowls, either flat- or crown-green, is usually played outdoors, on grass and synthetic surfaces. Flat-green bowls can also be played indoors on synthetic surfaces. Both variants are collectively known as "lawn bowls". 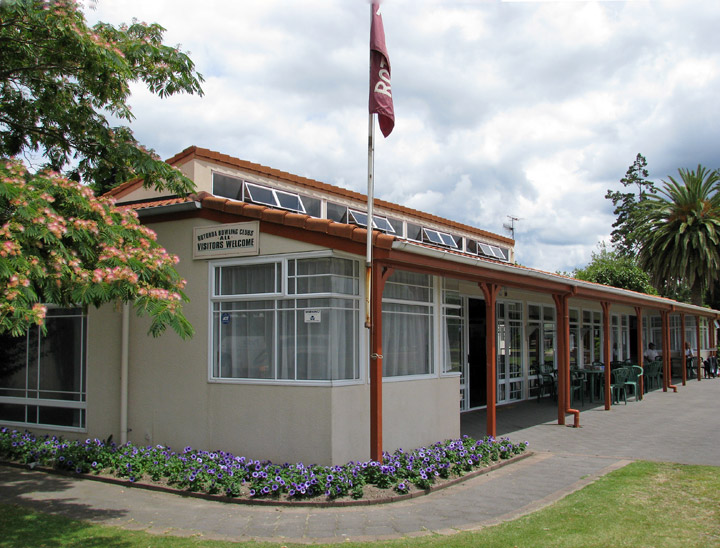 Bowls belongs to the boules sport family, and so is related to bocce and pétanque. It is most popular in Australia, New Zealand (where the playing surface is predominately cotula), the United Kingdom, and in other Commonwealth nations.

It has been traced certainly to the 13th century, and conjecturally to the 12th. William Fitzstephen (d. about 1190), in his biography of Thomas Becket, gives a graphic sketch of the London of his day and, writing of the summer amusements of the young men, says that on holidays they were "exercised in Leaping, Shooting, Wrestling, Casting of Stones [in jactu lapidum], and Throwing of Javelins fitted with Loops for the Purpose, which they strive to fling before the Mark; they also use Bucklers, like fighting Men." It is commonly supposed that by jactus lapidum, Fitzstephen meant the game of bowls, but though it is possible that round stones may sometimes have been employed in an early variety of the game - and there is a record of iron bowls being used, though at a much later date, on festive occasions at Nairn, - nevertheless the inference seems unwarranted. The jactus lapidum of which he speaks was probably more akin to the modern "putting the weight," once even called "putting the stone." It is beyond dispute, however, that the game, at any rate in a rudimentary form, was played in the 13th century. A manuscript of that period in the royal library, Windsor (No. 20, E iv.), contains a drawing representing two players aiming at a small cone instead of an earthenware ball or jack. The world's oldest surviving bowling green is the Southampton Old Bowling Green, which was first used in 1299. 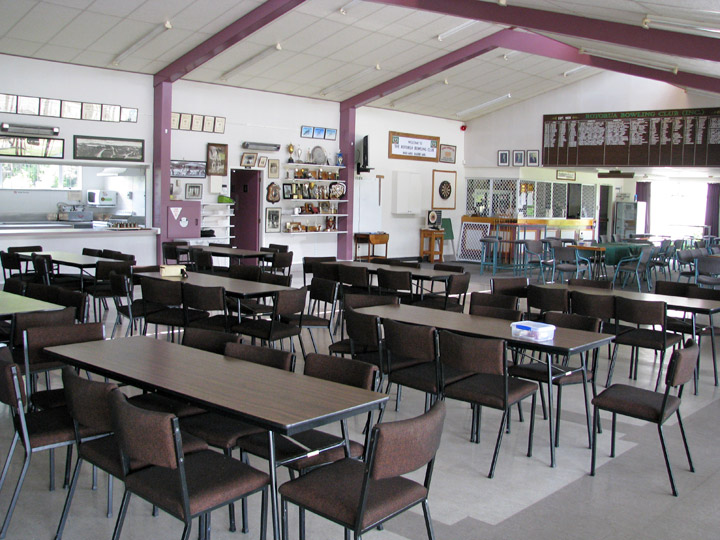 interior of the Rotorua Bowling Club 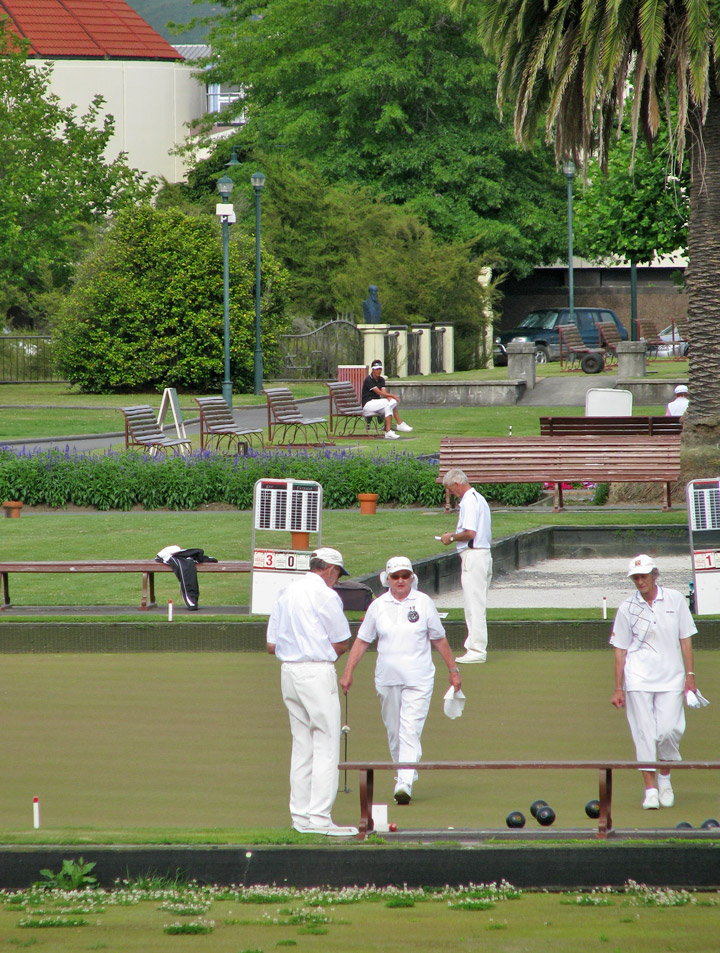 As the game grew in popularity, it came under the ban of king and parliament, both fearing it might jeopardise the practice of archery, then so important in battle. Statutes forbidding it and other sports were enacted in the reigns of Edward III, Richard II and other monarchs. Even when, on the invention of gunpowder and firearms, the bow had fallen into disuse as a weapon of war, the prohibition was continued. The discredit attaching to bowling alleys, first established in London in 1455, probably encouraged subsequent repressive legislation, for many of the alleys were connected with taverns frequented by the dissolute and gamesters. The word "bowls" occurs for the first time in the statute of 1511 in which Henry VIII confirmed previous enactments against unlawful games. By a further act of 1541 - which was not repealed until 1845 - artificers, laborers, apprentices, servants and the like were forbidden to play bowls at any time except Christmas, and then only in their master's house and presence. It was further enjoined that any one playing bowls outside his own garden or orchard was liable to a penalty of 6s. 8d., while those possessed of lands of the yearly value of £100 might obtain licenses to play on their own private greens. 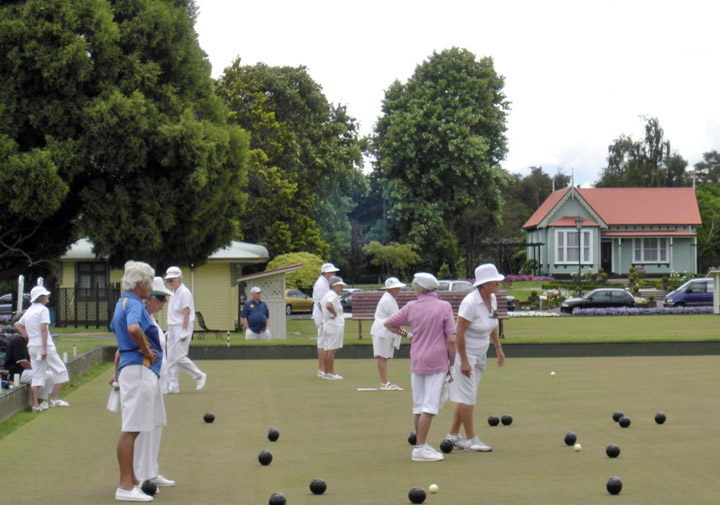 In 1864 William Wallace Mitchell (1803-1884), a Glasgow Cotton Merchant, published his "Manual of Bowls Playing" following his work as the secretary formed in 1849 by Scottish bowling clubs which became the basis of the rules of the modern game. Young Mitchell was only 11 when he played on Kilmarnock Bowling green, the oldest club in Scotland, instituted in 1740. The Scottish Bowling Association was the very first one to be established in 1892, although there had been a failed attempt in 1848 by 200 Scottish clubs. Today the club is played in over 40 countries with more 50 member national authorities. The home of the modern game is still Scotland with the World Bowls centre in Edinburgh at Caledonia House,1 Redheughs Rigg, South Gyle, Edinburgh, EH12 9DQ. 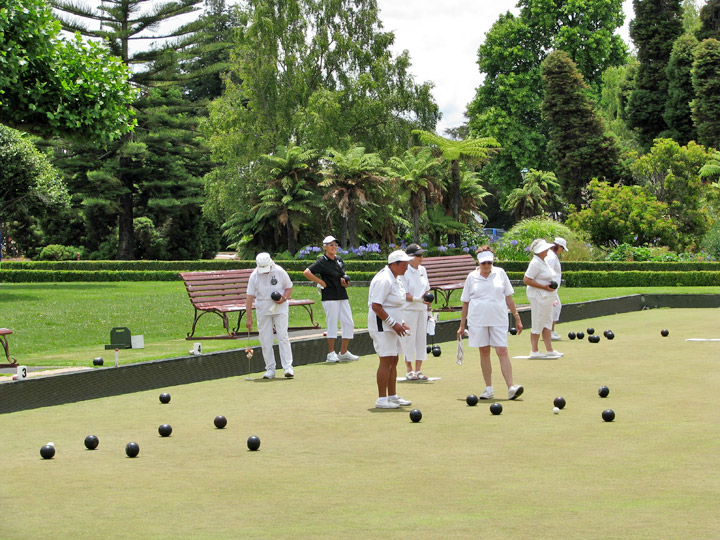 Lawn bowls is usually played on a large, rectangular, precisely leveled and manicured grass or synthetic surface known as a bowling green which is divided into parallel playing strips called rinks. An indoor variation on carpet is also played. In the simplest competition, singles, one of the two opponents flips a coin to see who wins the "mat" and begins a segment of the competition (in bowling parlance, an "end"), by placing the mat and rolling the jack to the other end of the green to serve as a target. Once it has come to rest, the jack is aligned to the center of the rink and the players take turns to roll their bowls from the mat towards the jack and thereby build up the "head".;. 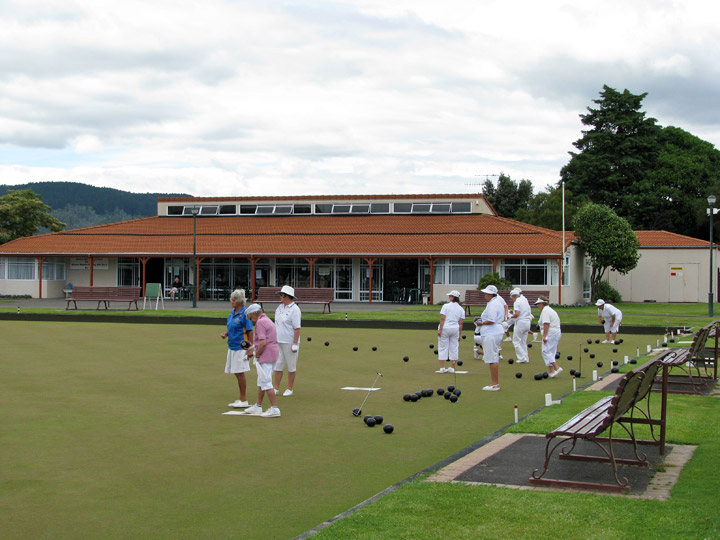 A bowl may curve outside the rink boundary on its path, but must come to rest within the rink boundary to remain in play. Bowls falling into the ditch are dead and removed from play, except in the event when one has "touched" the jack on its way. "Touchers" are marked with chalk and remain alive in play even though they are in the ditch. Similarly if the jack is knocked into the ditch it is still alive unless it is out of bounds to the side resulting in a "dead" end which is replayed though according to international rules the jack is "respotted" to the center of the rink and the end is continued. After each competitor has delivered all of their bowls (four each in singles and pairs, three each in triples, and two bowls each in fours), the distance of the closest bowls to the jack is determined (the jack may have been displaced) and points, called "shots", are awarded for each bowl which a competitor has closer than the opponent's nearest to the jack. For instance, if a competitor has bowled two bowls closer to the jack than their opponent's nearest, they are awarded two shots. The exercise is then repeated for the next end, a game of bowls typically being of twenty one ends. 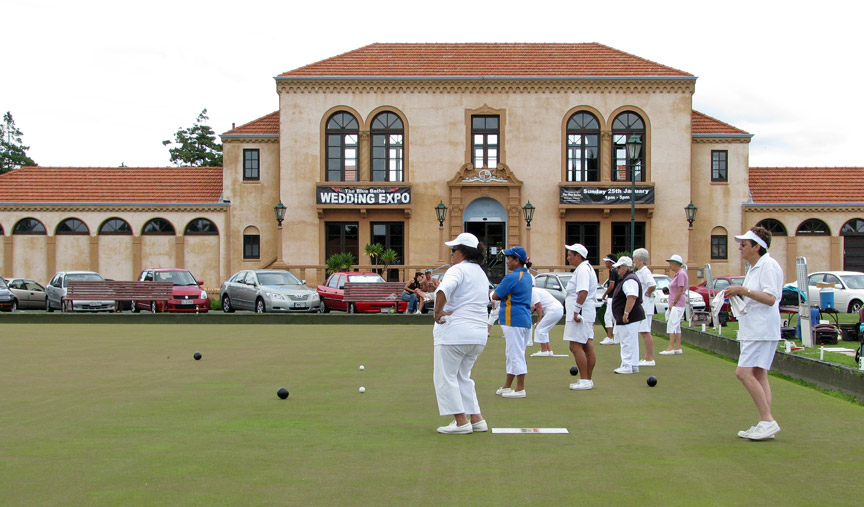 Lawn bowls is played on grass and variations from green to green are common. Greens come in all shapes and sizes, fast, slow, big crown, small crown etc.

Scoring systems vary from competition to competition. Games can be decided when:
* a player in a singles game reaches a specified target number of shots (usually 21 or 25).
* a team (pair, triple or four) has the higher score after a specified number of ends. 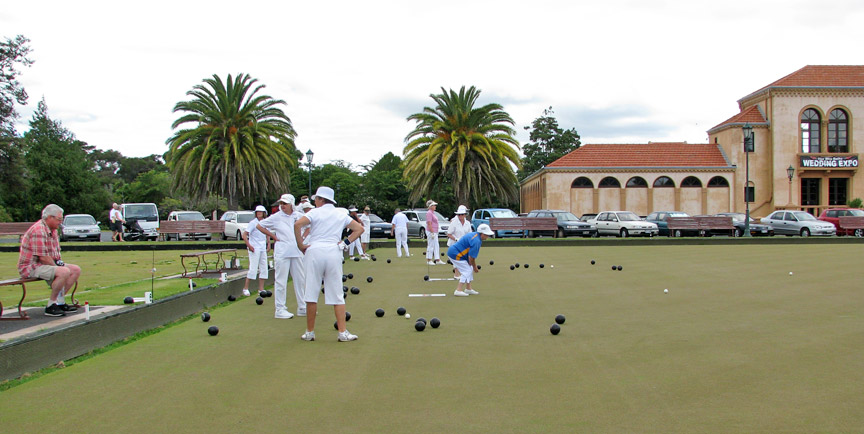 coaching from the bench ?

Games to a specified number of ends may also be drawn. The draw may stand, or the opponents may be required to play an extra end to decide the winner. These provisions are always published beforehand in the event's Conditions of Play. 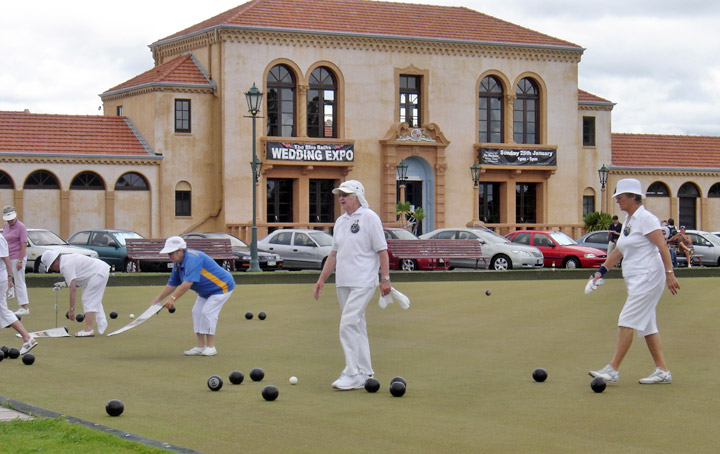 in front of the Blue Bath House

In the Laws of the Sport of Bowls the winner in a singles game is the first player to score 21 shots. In all other disciplines (pairs, triples, fours) the winner is the team who has scored the most shots after 18 ends of play. Often local tournaments will play shorter games (often 10 or 12 ends). Some competitions use a "set" scoring system, with the first to seven points awarded a set in a best-or-three or best-of-five set match. As well as singles competition, there can be two (pairs), three (triples) and four-player (fours) teams. In these, teams bowl alternately, with each player within a team bowling all their bowls, then handing over to the next player. The team captain or "skip" always plays last and is instrumental in directing his team's shots and tactics. The current method of scoring in the professional tour (World Bowls Tour) is sets. Each set consists of nine ends and the player with the most shots at the end of a set wins the set. If the score is tied the set is halved. If a player wins two sets, or gets a win and a tie, that player wins the game. If each player wins a set, or both sets end tied, there is a 3-end tiebreaker to determine a winner.