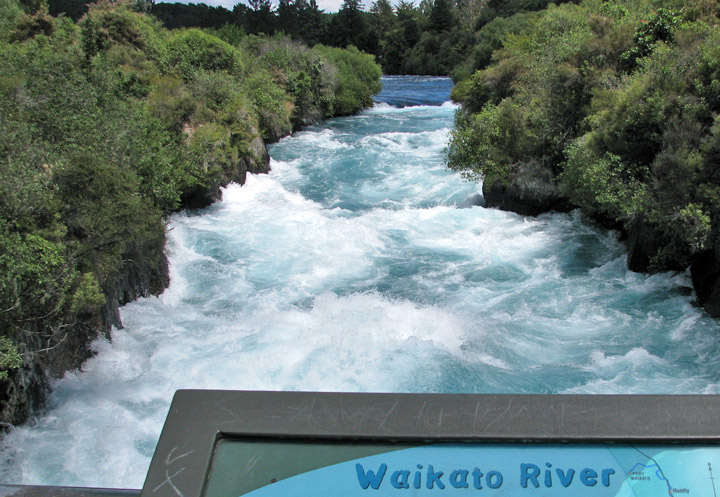 The Waikato River is the longest river in New Zealand. In the North Island, it runs for 425 kilometres from the eastern slopes of Mount Ruapehu, joining the Tongariro River system and emptying into Lake Taupo, New Zealand's largest lake. It drains Taupo at the lake's northeastern edge, creates the Huka Falls, then flows northwest, through the Waikato Plains. It empties into the Tasman Sea south of Auckland at Port Waikato. It gives its name to the Waikato region that surrounds the Waikato Plains.

The river's main tributary is the Waipa River, which has its confluence with the Waikato at Ngaruawahia. 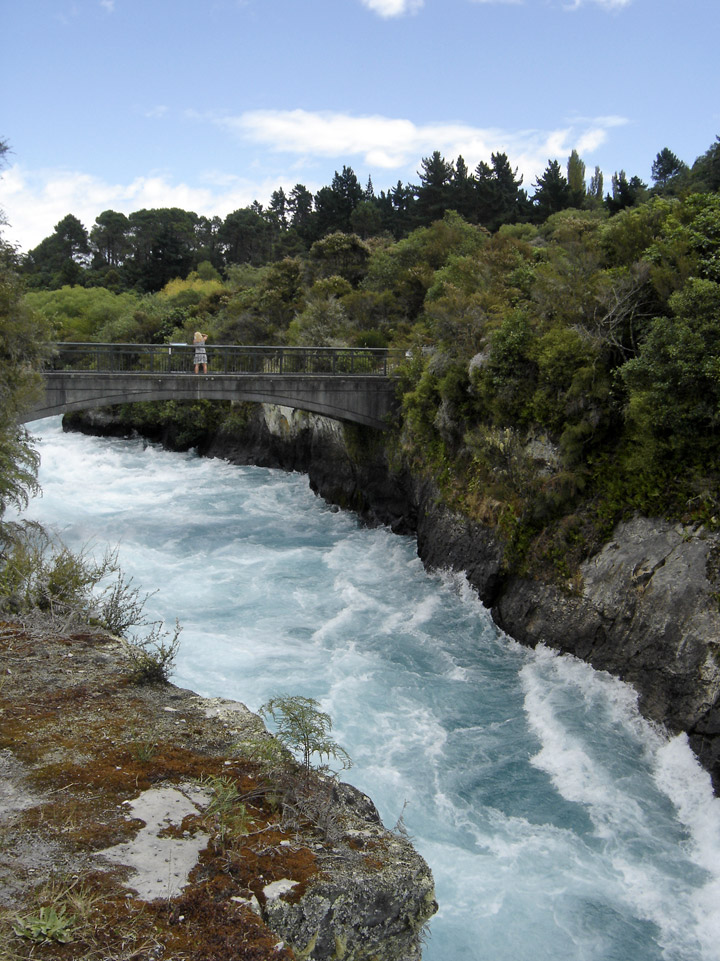 The name Waikato comes from Māori and translates as flowing water. 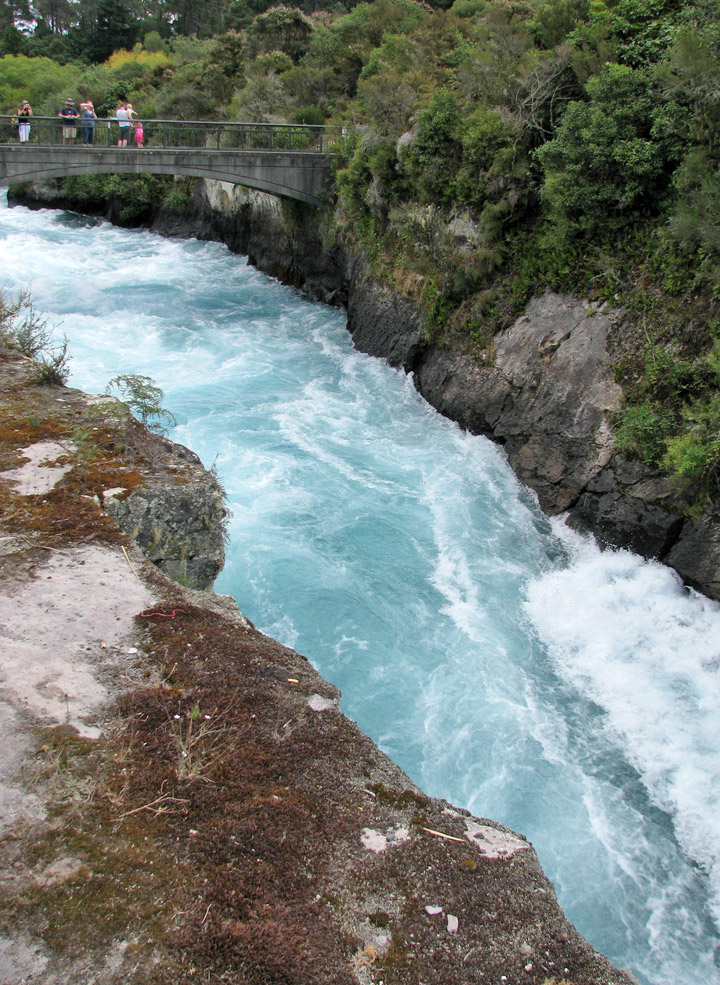 video of the sound of the river

The Waikato River has spiritual meaning for various local Māori tribes including the large Tainui, who regard it as a source of their mana or pride. The widely-respected marae of Turangawaewae is close to its banks at Ngaruawahia. 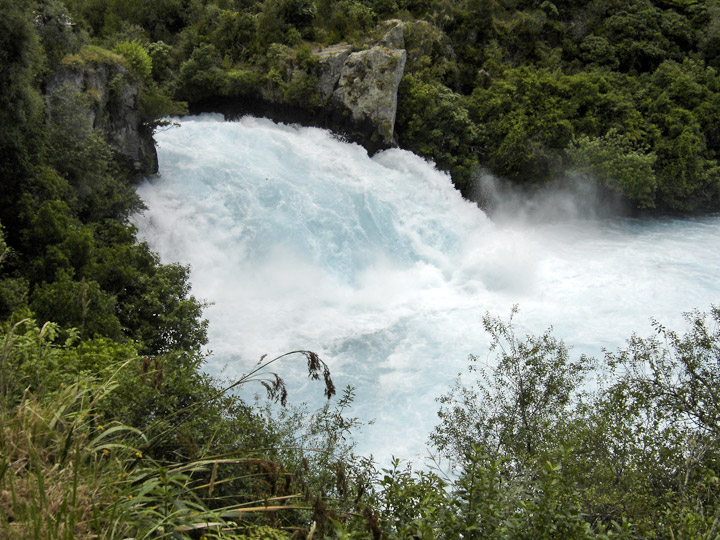 video of the sound of the falls

For many years Tainui tribe have sought to re-establish their links to the river after the New Zealand land wars and the subsequent illegal confiscations of the 1860s, and are continuing negotiations with the current New Zealand government. 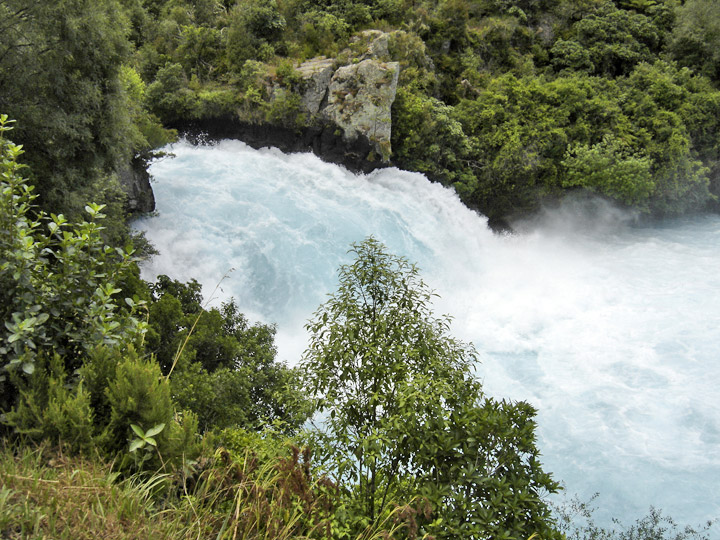 The river starts as many small streams on the eastern side of Mount Ruapehu. The Mangatoetoenui Glacier (once called the Waikato glacier) is one of the principal sources. The southernmost tributary is called the Upper Waikato Stream. The Waipakihi River joins the Waikato from the Kaimanawa Mountains to the west. At the point the river meets the Waihohonu Stream, it becomes called the Tongariro River. The Pouto River joins from Lake Rotoaira to the east. The Tongariro flows northward, with State Highway 1 in parallel, through the town of Turangi, and into the southern side of Lake Taupo. Extensive engineering of lakes, tunnels and canals are used to generate hydroelectric power in the Tongariro Power scheme. 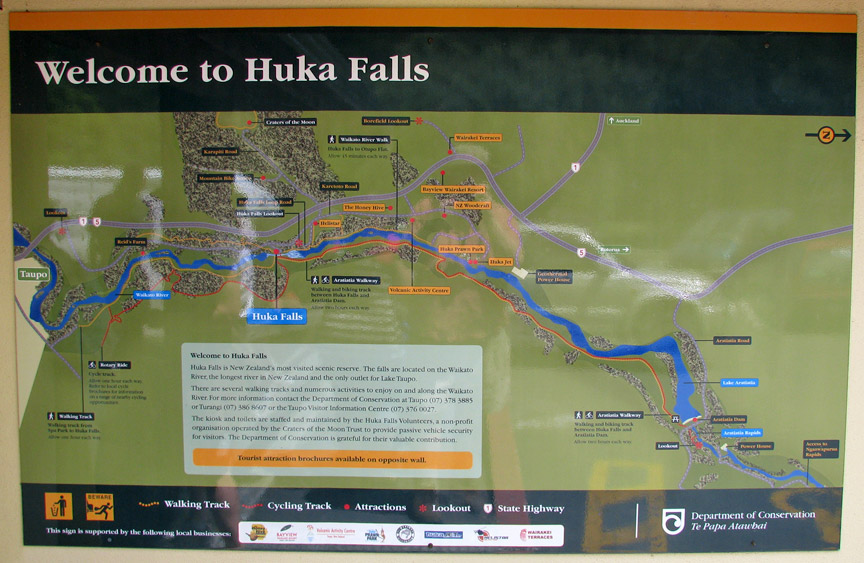 At the northeast point of Lake Taupo is Tapuaeharuru Bay and the town of Taupo. The Waikato River leaves the lake and flows northeast past the town, alongside State Highway 1, to the Huka Falls. State Highway 5 runs more or less parallel to the river as it flows further northeast. About 40 km from the lake, the river flows west and into the southern end of Lake Ohakuri. It exits from the northwest end of that lake and flows west through the small Lake Atiamuri and into the long east-west oriented Lake Whakamaru, with State Highway 30 following its course. It passes northwest through Lake Maraetai and Lake Waipapa, where it is joined by the Waipapa River, then north through Lake Arapuni and into Lake Karapiro. Pokaiwhenua Stream joins the river in Lake Karapiro. Many hydroelectric power stations extract energy from the river between Taupo and Karapiro. All the lakes in this stretch of the river (apart from Lake Taupo) are artificial. 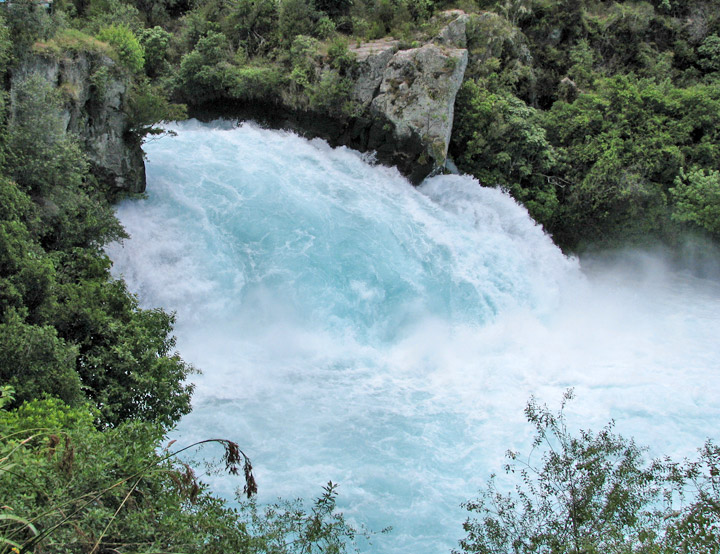 Northwest of Lake Karapiro, the river forms the Waikato Basin, flowing through the towns of Cambridge, Hamilton, and Ngaruawahia. It is joined by its largest tributary, the Waipa River, at Ngaruawahia. It then flows north through the Taupiri Gorge to enter the lower Waikato region. Further north is Huntly and then Meremere, where the Whangamarino and Maramarua Rivers join it. From Mercer, where the Mangatawhiri River joins it, the Waikato flows west and southwest. Just before its mouth at Port Waikato, the Araroa River joins from the north. 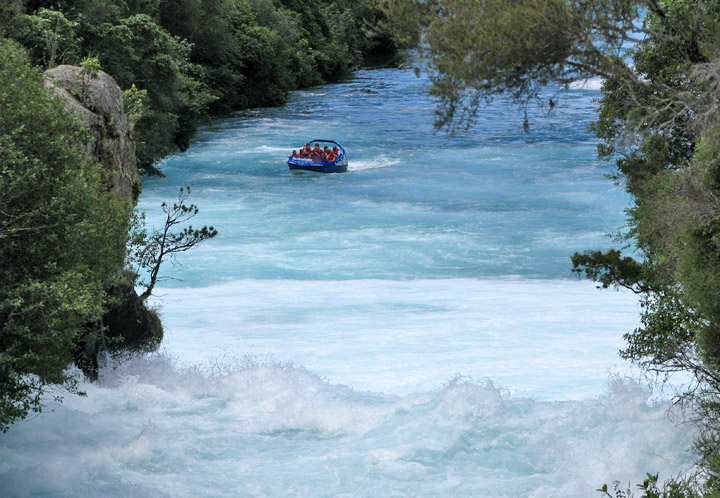 As well as being a water and recreation resource, the river has long been a critical communications and transport link for the communities along it. Taupo, Mangakino, Cambridge, Hamilton, Horotiu, Ngaruawahia, Huntly, Hampton Downs, Meremere, Waiuku and Port Waikato are on or close to it. 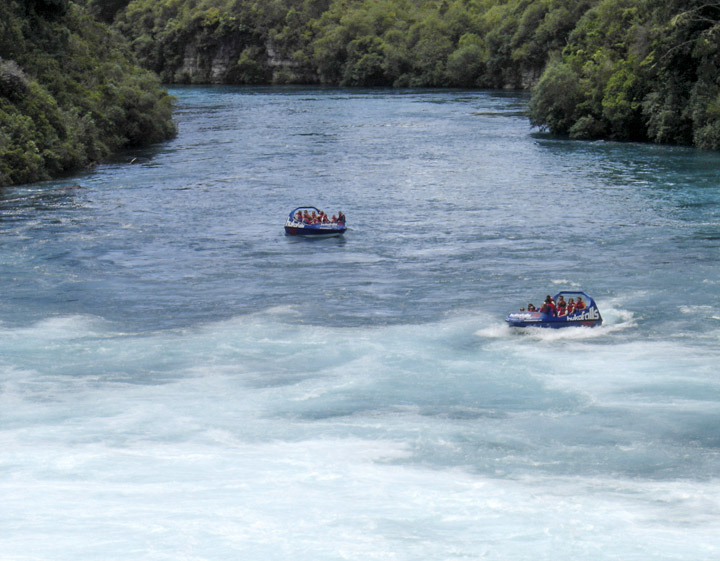 short video of the jet boat


The river was of military significance in the land wars between British and Māori soldiers around 1863, and significant battles were fought at points including Rangiriri. A cemetery containing the graves of the British military dead can be found there opposite the hotel, shops and cafe. 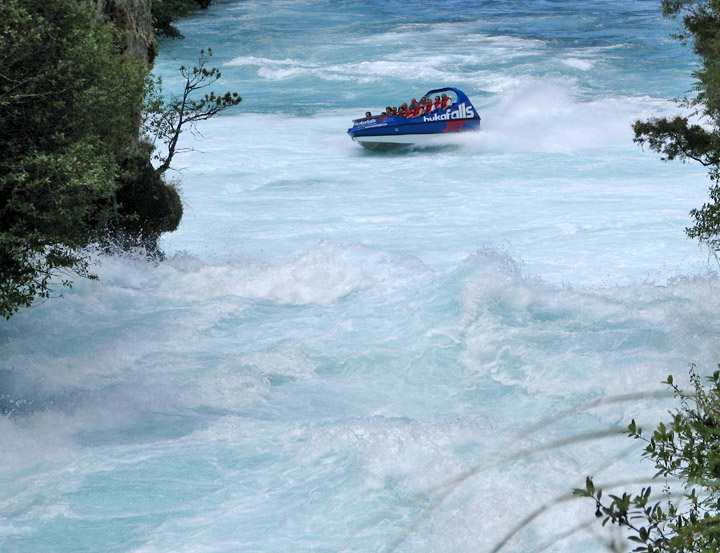 forced to turn around

A ferry service along part of its length was for years conducted by Cesar Roose, several of whose descendants still live beside it. 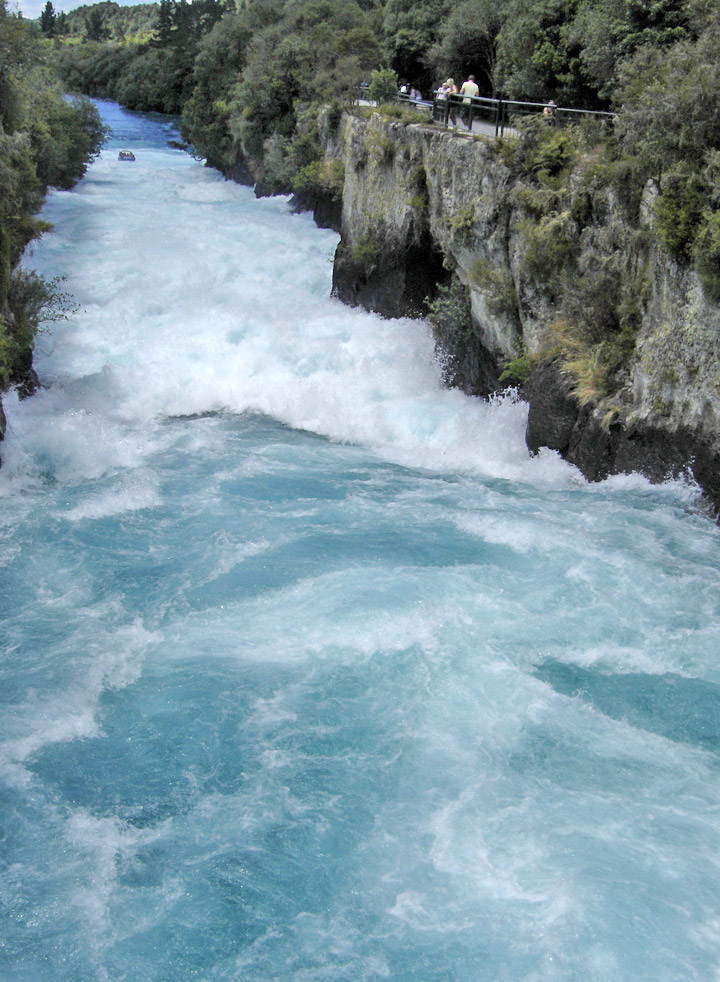 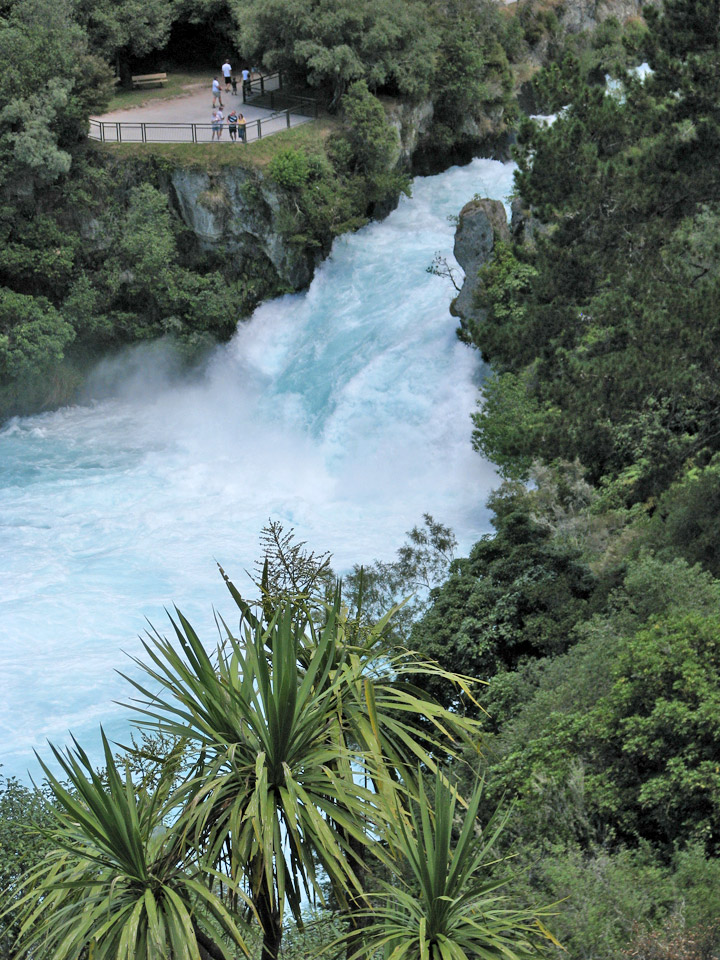 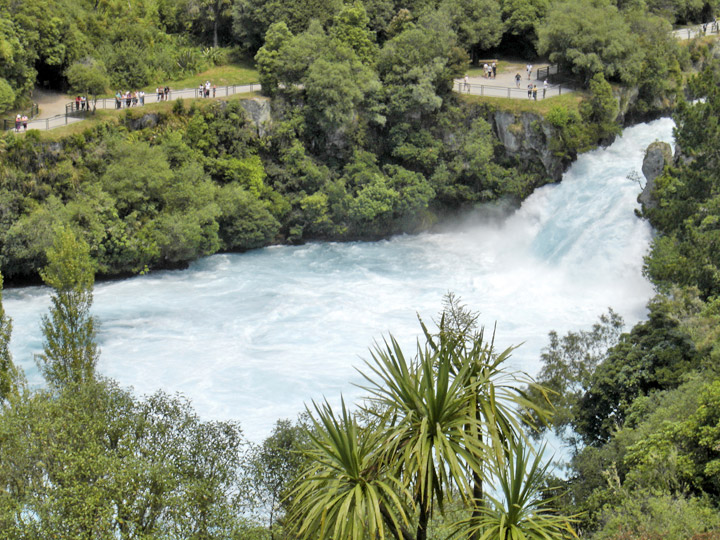 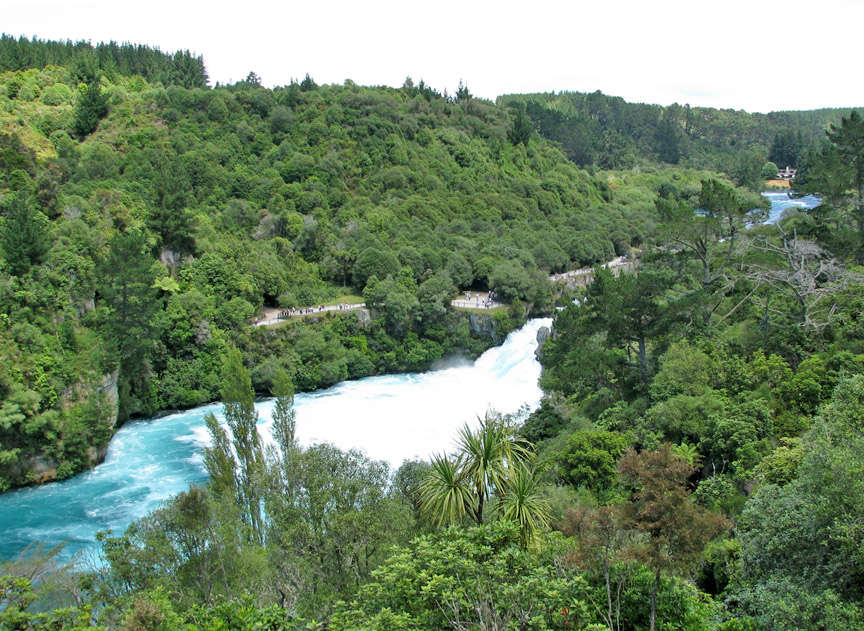