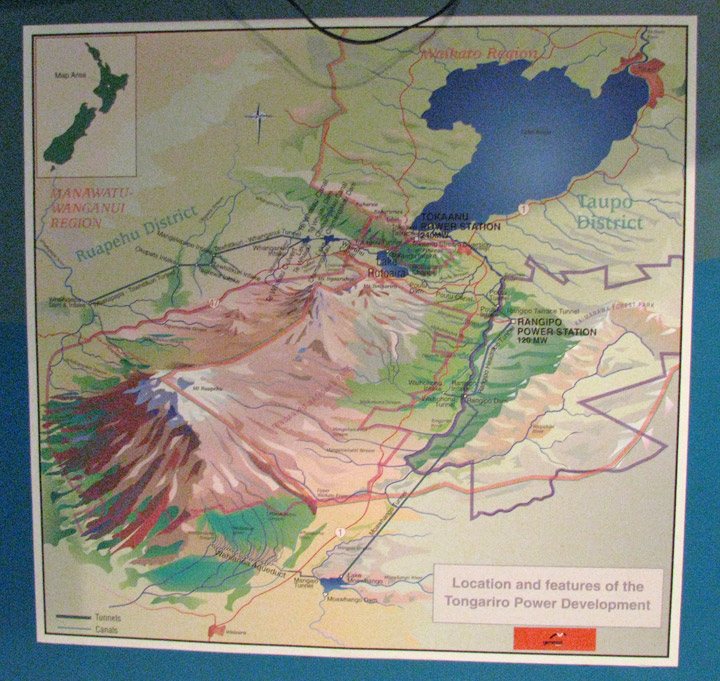 Mount Ruapehu, or just Ruapehu, is an active stratovolcano at the southern end of the Taupo Volcanic Zone in New Zealand. It is 23 kilometres northeast of Ohakune and 40 kilometres southwest of the southern shore of Lake Taupo, within Tongariro National Park. The North Island's major skifields and only glaciers are on its slopes. 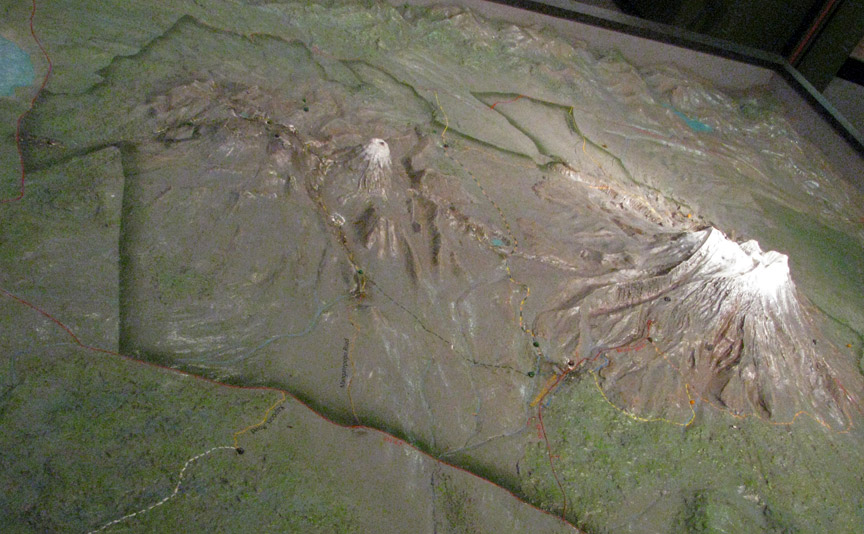 model of the mountains

Ruapehu is one of the world's most active volcanoes and the largest active volcano in New Zealand. It is the highest point in the North Island and includes three major peaks: Tahurangi (2,797 m), Te Heuheu (2,755 m) and Paretetaitonga (2,751 m). The deep, active crater is between the peaks and fills with a crater lake between major eruptions. 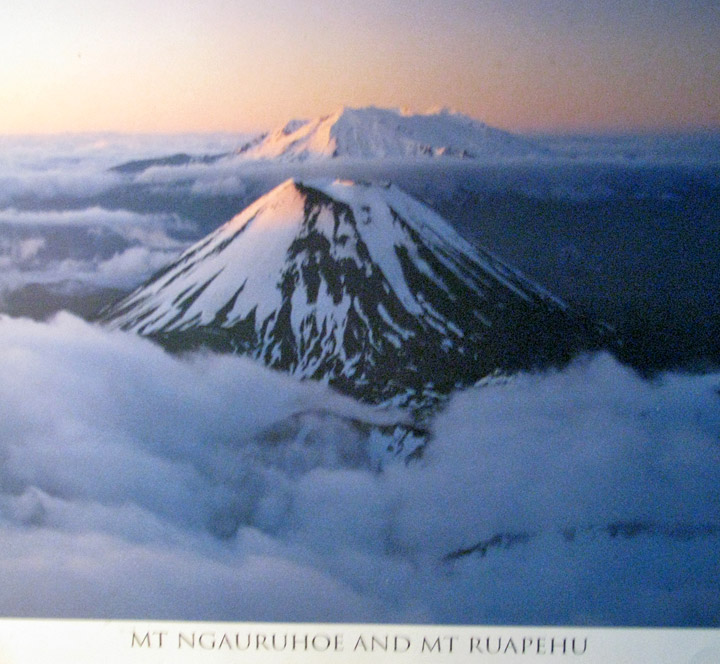 Ruapehu is largely composed of andesite and began erupting at least 250,000 years ago. In recorded history, major eruptions have been about 50 years apart, in 1895, 1945 and 1995–1996. Minor eruptions are frequent, with at least 60 since 1945. Some of the minor eruptions in the 1970s generated small ash falls and lahars (mudflows) that damaged skifields. 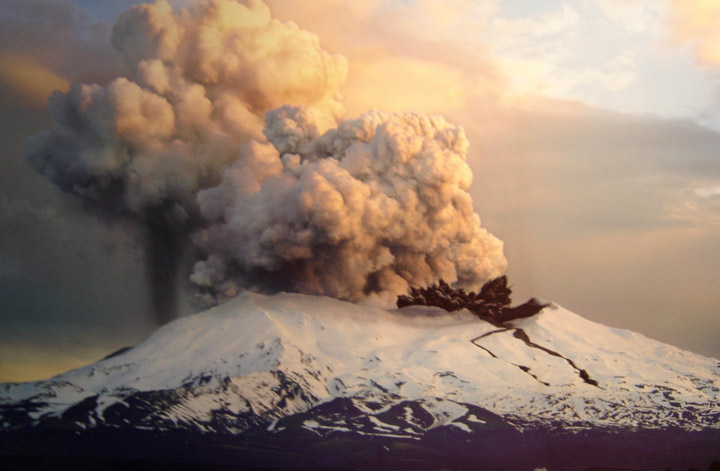 Between major eruptions, a warm acidic crater lake forms, fed by melting snow. Major eruptions may completely expel the lake water. Where a major eruption has deposited a tephra dam across the lake's outlet, the dam may collapse after the lake has refilled and risen above the level of its normal outlet, the outrush of water causing a large lahar. In 2000, the ERLAWS system was installed on the mountain to detect such a collapse and alert the relevant authorities. 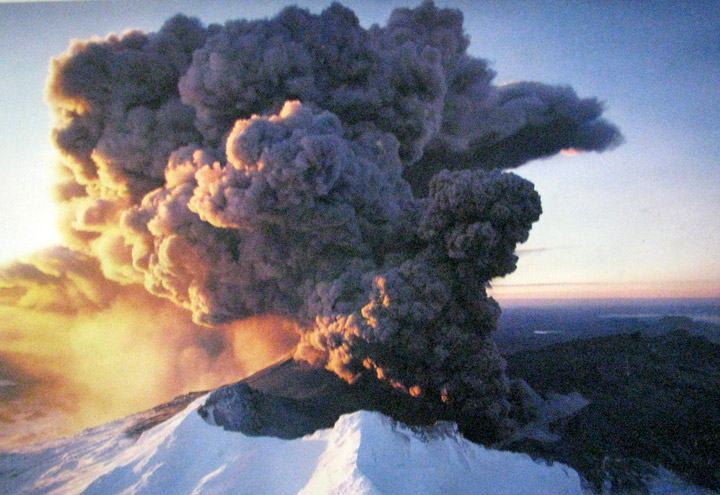 The 1945 eruption emptied the crater lake and dammed the outlet with tephra. The crater slowly refilled with water, until on December 24, 1953 the tephra dam collapsed causing a lahar in the Whangaehu River. The lahar caused the Tangiwai disaster, with the loss of 151 lives, when the Tangiwai railway bridge across the Whangaehu River collapsed while the lahar was in full flood, just before an express train crossed it. It was already known that the river had partially undermined one of the bridge piers and the lahar finished the job, causing the bridge to collapse. Although warned of the collapsed bridge, the train driver was unable to stop the train in time and 6 of the carriages fell into the river. 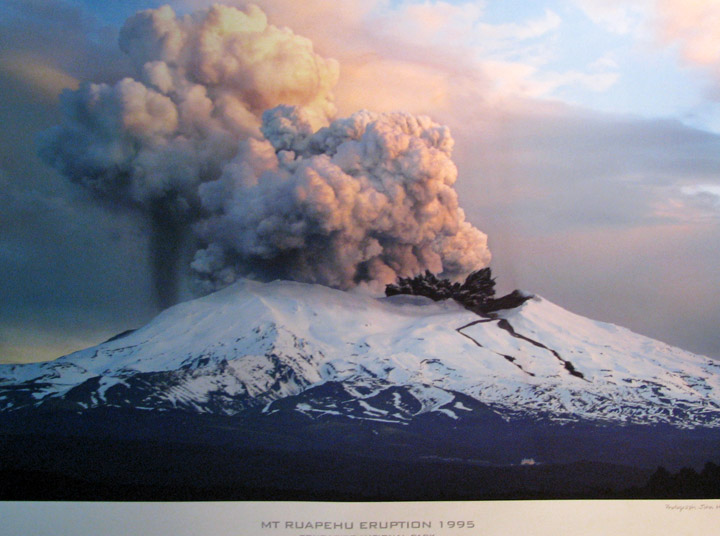 Spectacular eruptions occurred during 1995 and 1996. Ruapehu had been showing signs of increased activity since late November 1994, with elevated crater lake temperatures and a series of eruptions that increased in intensity over about nine months. Several lahar were observed, both in the Whangaehu River and other areas of the mountain, between September 18 and September 25, 1995, indicating the crater lake was being emptied by the eruptions. The Department of Conservation immediately issued hazard warnings and advised people to keep off the mountain, thus ending the ski season. The eruption cloud disrupted air travel, occasionally closing airports and the central North Island airspace. Episodic eruptions continued until the end of November 1995. 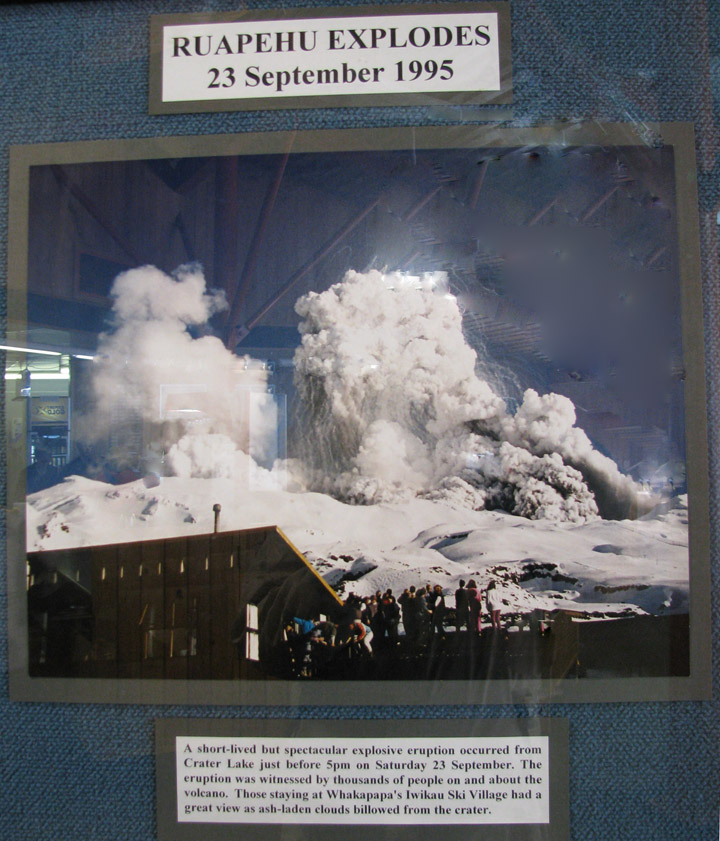 Within hours of a major eruption during the night being reported on September 25, 1995, news media were trying to get live video of the eruption and amateur photographers had published eruption images on the World Wide Web. A webcamera, dubbed the world's first "VolcanoCam", was set up. Since then Ruapehu has been monitored by at least one and sometimes several volcanocams.

Another, smaller, eruption phase began on the morning of June 17, 1996. The mountain was closed to visitors and the skifields were closed for the season, this time before they even opened.

After the 1996 eruption it was recognised that a catastrophic lahar could again occur when the crater lake burst the volcanic ash dam blocking the lake outlet. This is the same mechanism that caused the 1953 lahar. The lake gradually filled with snowmelt and had reached the level of the hard rock rim by January 2005. The lahar finally occurred on the 18 March 2007. 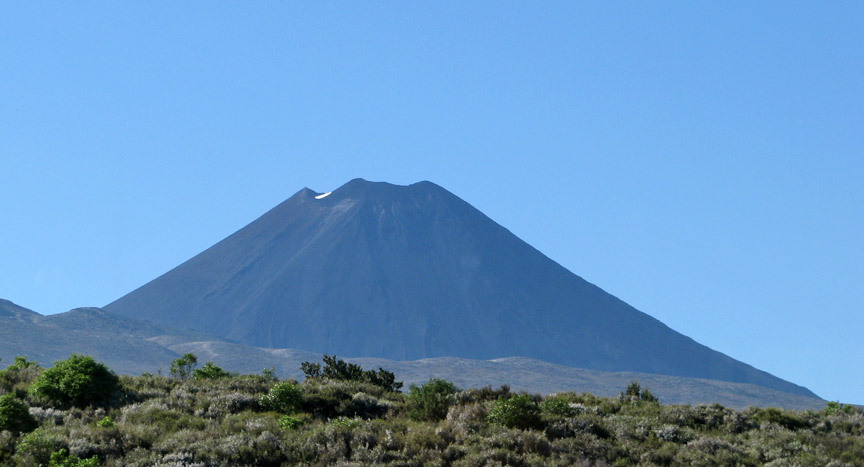 Ruapehu erupted at 10.30pm on 4 October 2006. The small eruption created a volcanic earthquake of magnitude 2.8, sending a water plume 200 m into the air and 6-m waves crashing into the wall of the crater. 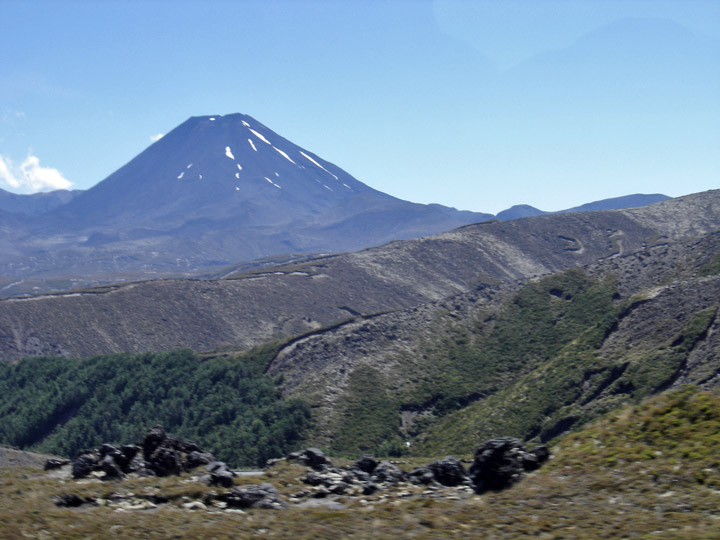 On 18 March 2007, the tephra dam which had been holding back the crater lake burst, sending a lahar down the mountain. An estimated 1.4 million cubic metres of mud, rock, and water thundered down the Whangaehu river. The Department of Conservation had received warning signals from the lahar warning system (ERLAWS) at around 10:30 that morning and closed all major roads in the area (trapping thousands of motorists) and shut down the main rail system for the North Island. Luckily the river banks held and no spill overs occurred. No serious damage was done and no one was injured. One family was trapped for around 24 hours after the lahar swept away the access route to their home. 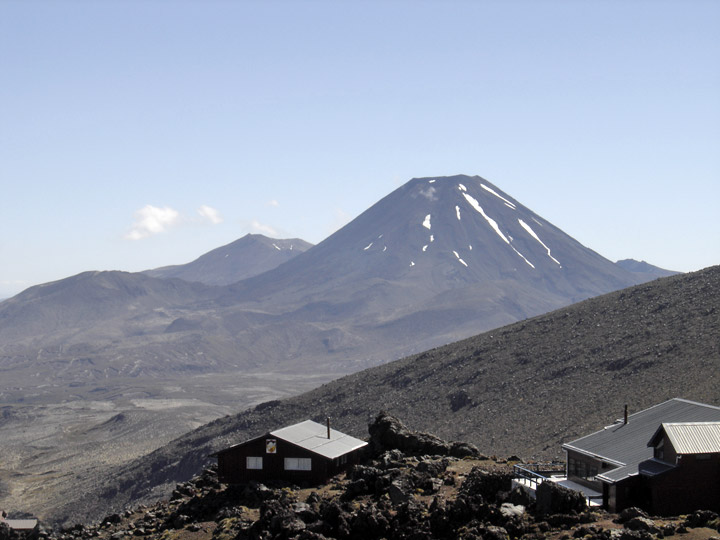 At about 8:20pm on 25 September 2007 a hydrothermal eruption occurred without warning. William Pike, a 22 year old primary school teacher had a leg crushed by a rock during the eruption and a rescue operation was mounted to rescue him from the Dome Shelter near the crater. The rock crashed into the Dome Shelter, landed on him and was too heavy for his companion to lift off. Two lahars that traveled down the mountain activated warning signals from the lahar warning system and prompted some ski lodges on the mountain to be evacuated and the closure of roads in the area. The eruption was accompanied by a 7 minute long earthquake, 2.9 on the Richter Scale. 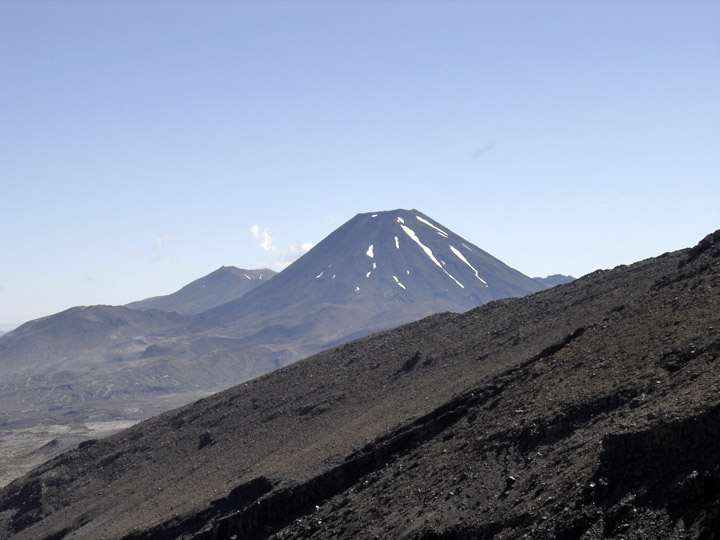 On the 2nd of May 2008 a level 1 warning was issued after GNS scientists who were monitoring the lake, found irregular signs of volcanic activity. This included increased chemical changes, gases and temperature. The warning was used to let visitors know the potential of an explosion was higher than usual and could happen at any time. This could also be a follow-up to last year's 2007 eruption. 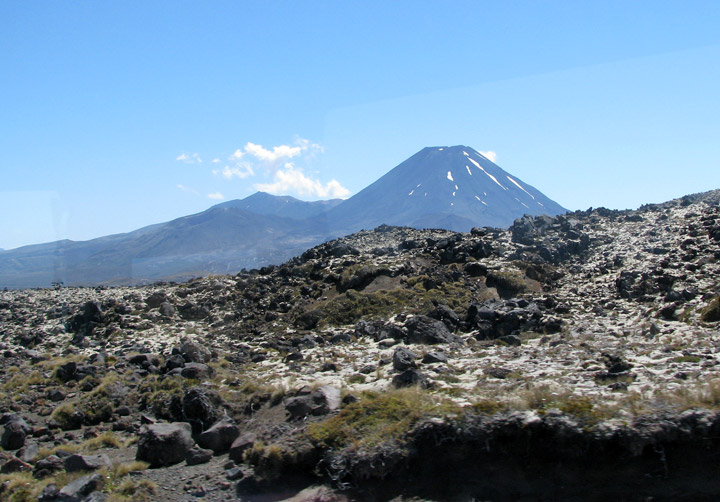 A GeoNet New Zealand Bulletin was released on 21/07/2008 stating that "the current phase of volcano unrest appears to be over, however Ruapehu remains an active volcano. Future eruptions may occur without warning." However the level has remained at 1. It has been at this level since 1997. 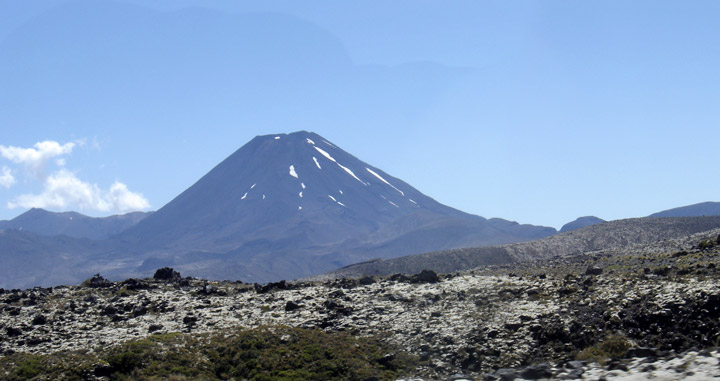 Ruapehu has two commercial ski fields, Whakapapa on the northern side and Turoa on the southern slope. They are the two largest ski fields in New Zealand, with Whakapapa the larger. The private Tukino field is on the east of the mountain. The season is generally from June to October but depends on snow and weather conditions. Both ski fields are accessible by car and chairlifts, with beginners' to advanced skiing slopes. Limited accommodation and refreshments are available at Top o' the Bruce (the car park at the top of Bruce Road) and at the entry to Whakapapa, and elsewhere on the mountain. Alpine huts are provided for trampers and climbers. 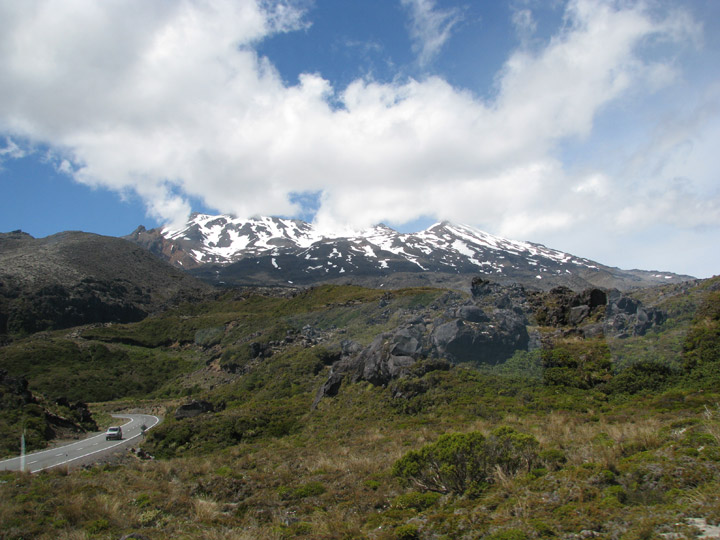 Weather conditions can be changeable over the day, and mountain visitors are advised to be prepared and carry basic survival equipment. Although severe weather is unusual and generally forecast, it has claimed several lives over the years, including a party of soldiers undergoing winter survival training in 1990. The same storm also trapped a Japanese tourist when the weather unexpectedly closed in on him, but he built a snow cave and sheltered in it until he was rescued days later.

viewed from the South side 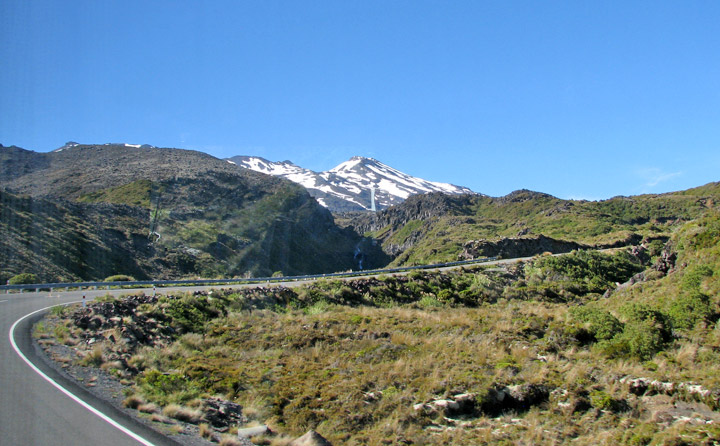 Again on Saturday July 26, 2008 skiers and staff were trapped on the mountain overnight when a fast approaching storm caused the skifield to be closed at 10:30am and made the road too dangerous for cars without chains or 4WD to leave the area. By 3pm there were still over 100 cars in the Whakapapa car park and those who had not been able to leave by that point were told to settle in for the night. All cars were able to leave safely the next morning.g. 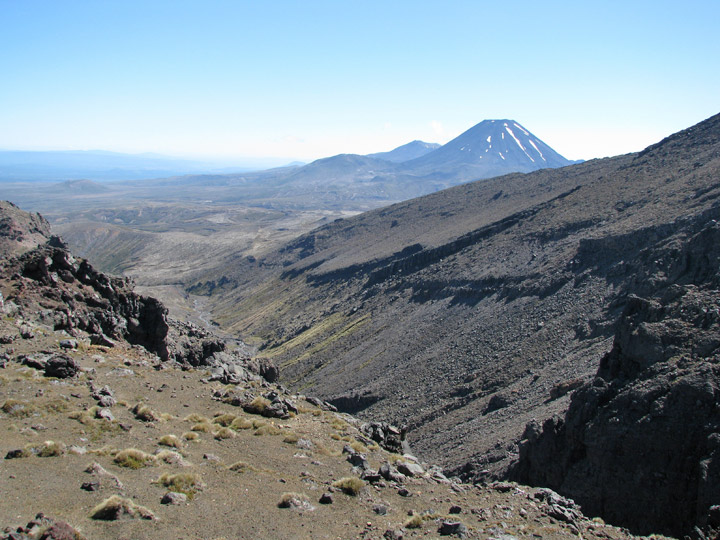 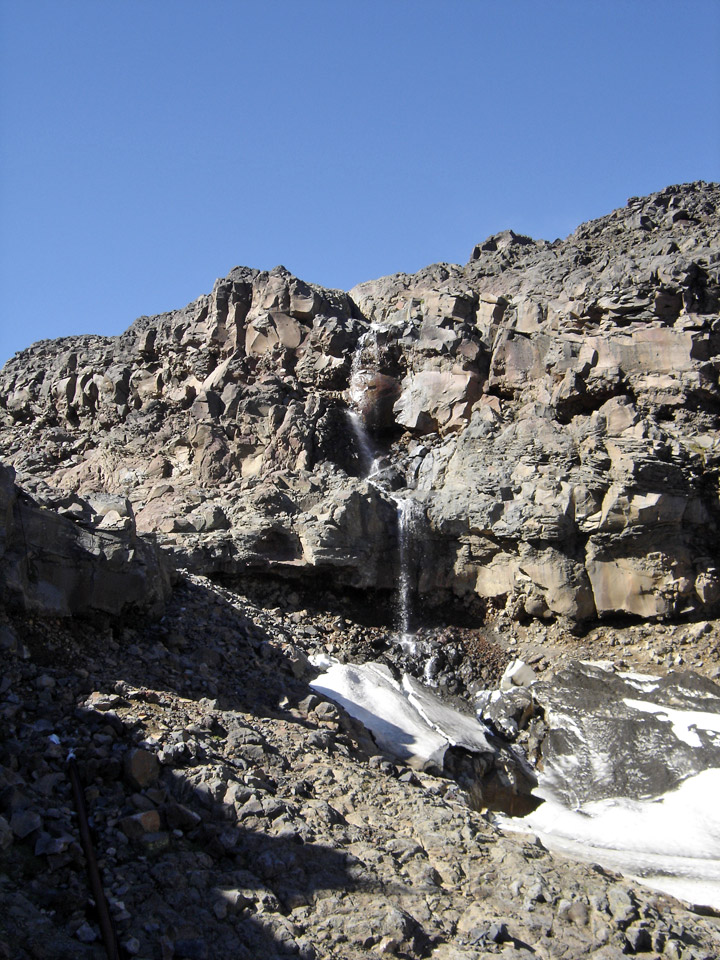 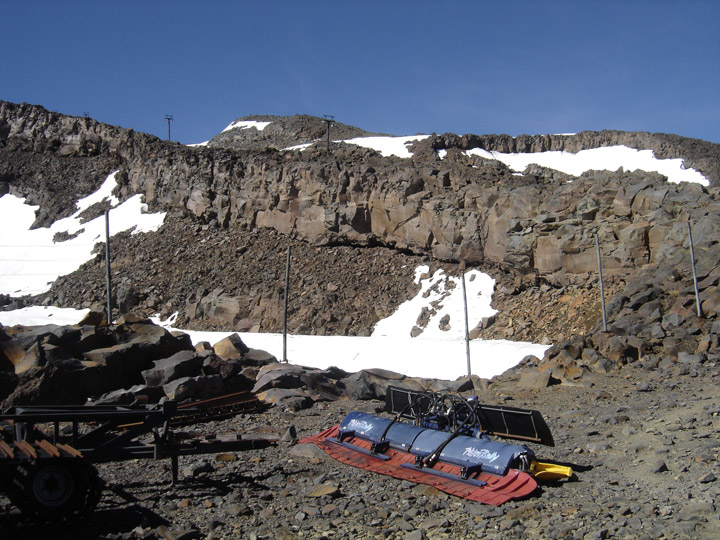 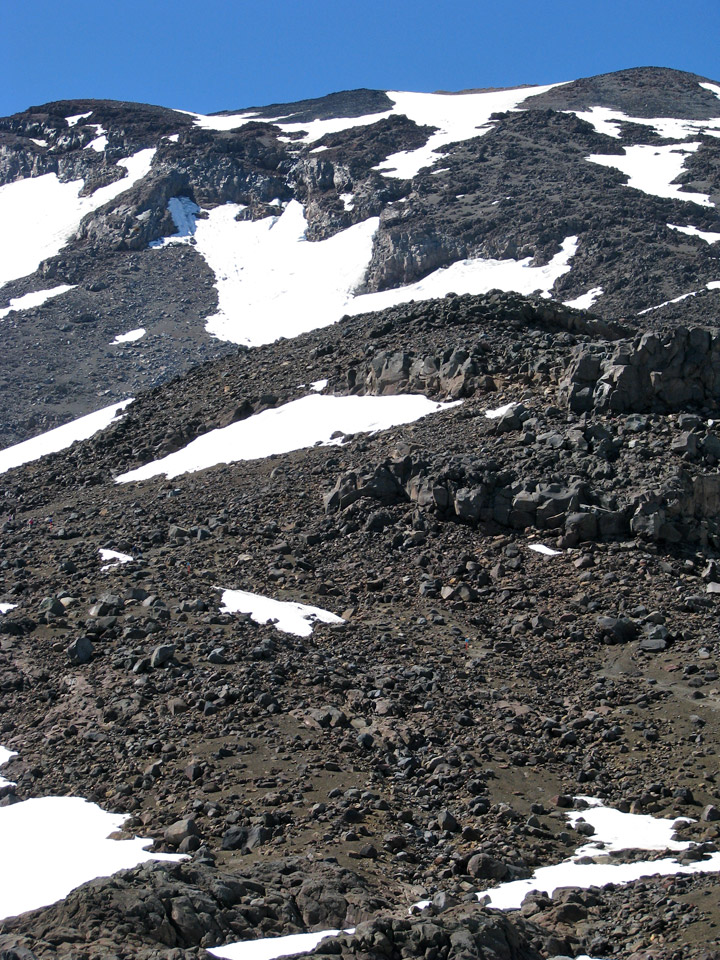 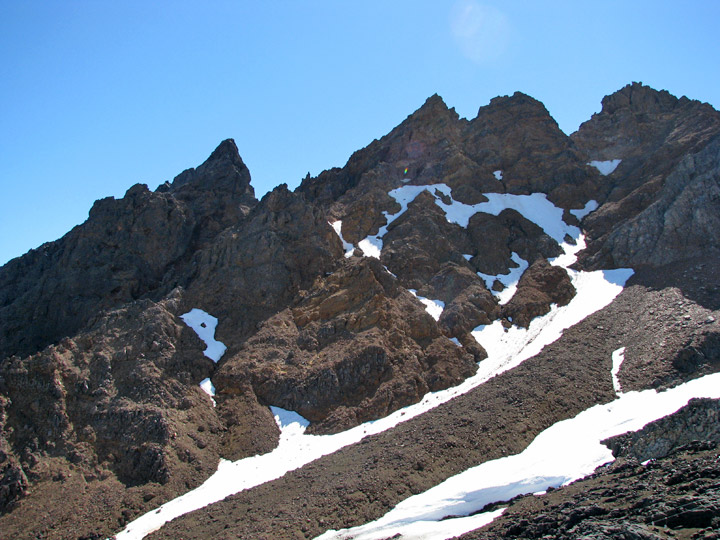 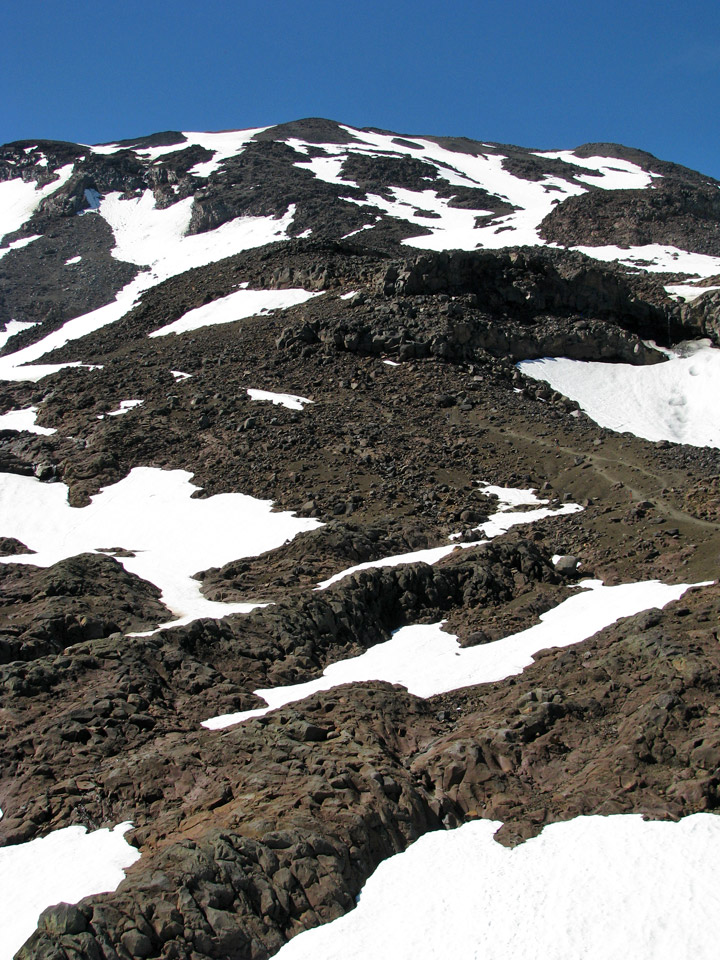 the trail from the lift station to the top

Photos of the Lift 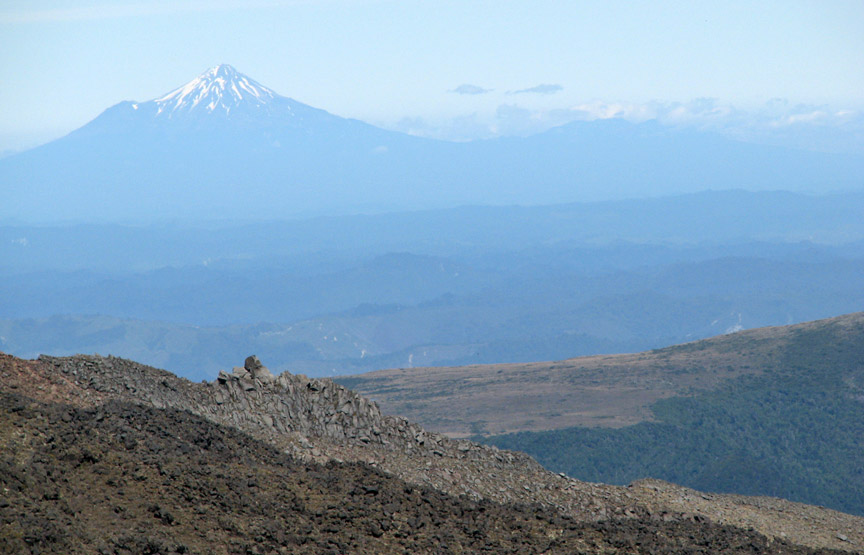