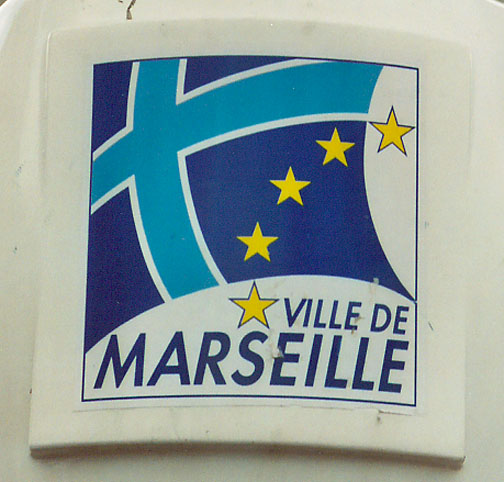 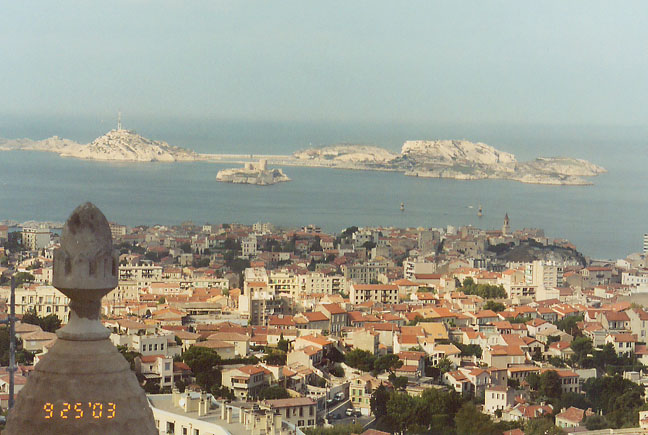 Gulf of Lion (an arm of the Mediterranean Sea)

first island in the center is the
16th-century Château d'If, mentioned in The Count of Monte Cristo (1844)

Marseille or Marseilles (Greek Massalia; Latin Massilia), city in southern France, capital of Bouches-du-Rhône Department, on the Gulf of Lion (an arm of the Mediterranean Sea). The second largest city of France after Paris, it is a major seaport and an important commercial and industrial center. The city is linked by canal with the Rhône River and is served by extensive rail and air transport facilities; the large petroleum port of Fos, chiefly developed in the 1970s, is nearby. Manufactures of the Marseille metropolitan area include iron and steel, chemicals, plastic and metal products, ships, refined petroleum, construction materials, soap, and processed food. 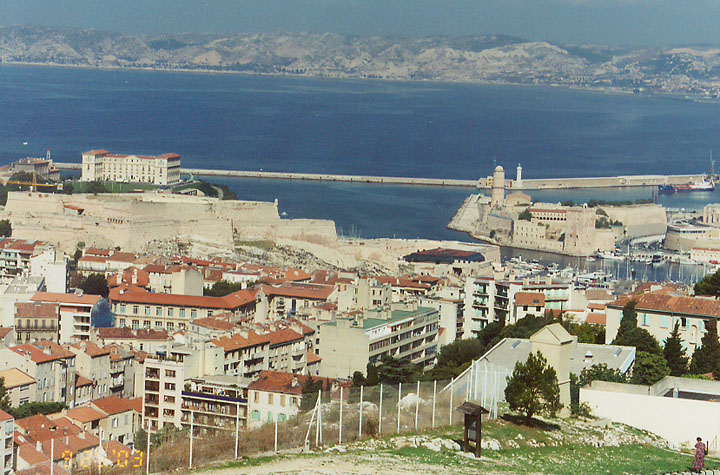 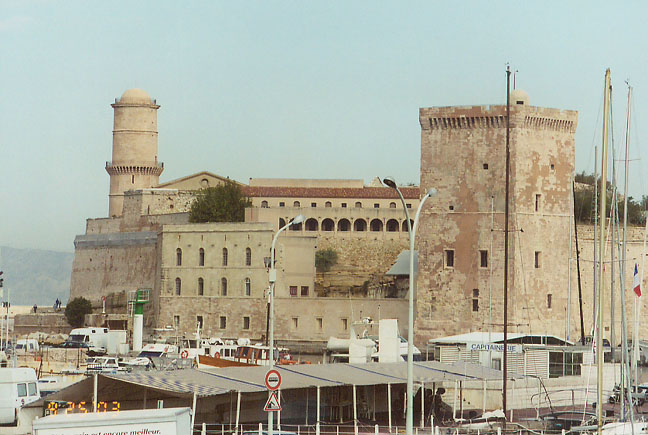 For most of the long history of Marseilles, the town occupied the same fortified 70 hectares on the north side of the Old Port from its founding until 1660. There was one "brief" period in the 7th century, during barbarian invasions, when the area was reduced to a smaller fortified position, but it quickly regained its original size, which has been inhabited now for 26 centuries.

on the left of the photo above is

the "château" , the Pharo Palace, one of the residences of Empress Eugénie, the wife of Napoleon III

In the bay fronting Marseille are several islands, including the islet of If, site of the 16th-century Château d'If, mentioned in The Count of Monte Cristo (1844), by the French novelist Alexandre Dumas père. Several forts protect the harbor, and on a high strip of land projecting west into the bay is the 19th-century Church of Notre Dame de la Garde, surmounted by a gilded statue of the Virgin Mary. The main shopping district is along a broad boulevard called the Canebière. Marseille has few relics of the ancient period, although it is the oldest city in France. In the late 1960s archaeologists uncovered parts of the Hellenistic ramparts of the city, and a section of the medieval Cathedral of La Major still stands. In the 11th-century crypts, over which the Church of Saint Victor was built in the 13th century, is an image of the Virgin Mary supposed to have been done by St. Luke. Educational and cultural facilities in the city include the universities of Aix-Marseille I and II (1970) and museums of archaeology, shipping, and fine arts. 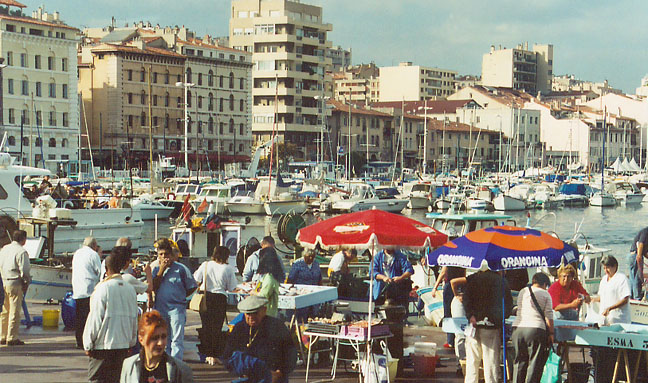 on the inner harbor is the daily fish market

About 600 BC the site of Marseille was colonized by Greeks from Asia Minor and called Massalia. The settlement flourished, and during the Punic Wars in the 2nd and 3rd centuries BC it sided with Rome against Carthage. In 49 BC, after supporting Pompey the Great in the civil war against Julius Caesar, the city was annexed by Rome. The inhabitants were converted to Christianity during the 3rd century AD , and in 304 St. Vincent was martyred here. In the 10th century it became a dominion of the counts of Provence, and in the 13th century it was made a republic. The city was incorporated into the kingdom of France in 1481. 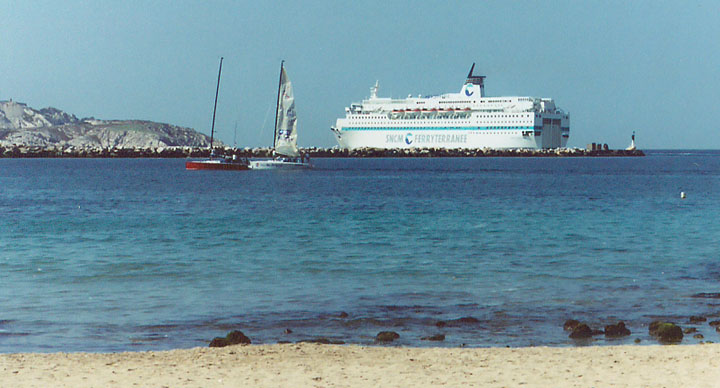 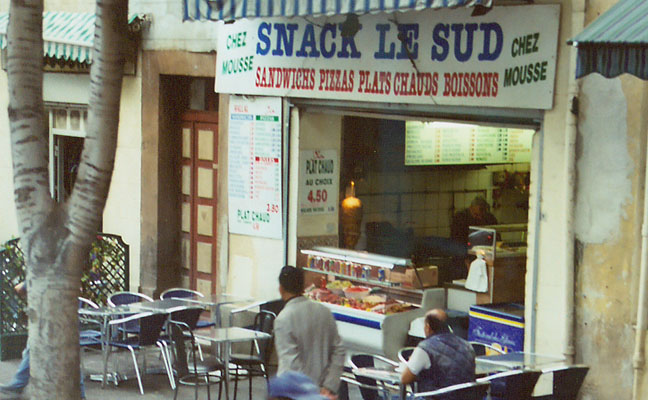 as a gateway to the South, has a Southern influence

Commerce at the port increased in the 18th century, before suffering a severe setback during the French Revolution (1789-1799) and the Napoleonic Wars (1799-1815). After 1850 port facilities were greatly expanded, and many industries were established at Marseille. The city was occupied and badly damaged by the Germans in World War II (1939-1945). Subsequently, major construction programs transformed Marseille into a modern community with many high-rise buildings. Many of the city's residents are descendants of immigrants from Italy, Spain, and North Africa. Marseille was also a major resettlement point for former colonists who returned to Europe when Algeria became independent in 1962. Population (1999) 798,430.

Some of the text above is from Microsoft Encarta

lunch is a serious undertaking

Early in the 11th century, trade had expanded and the city prospered. Marseilles became an independent republic in 1214, but remained independent only for 38 years. In 1252, Charles of Anjou took Marseilles under his rule. 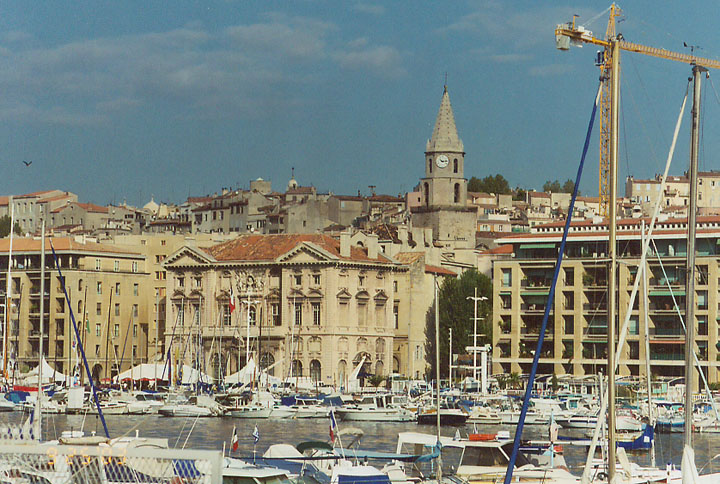 city hall across the harbor 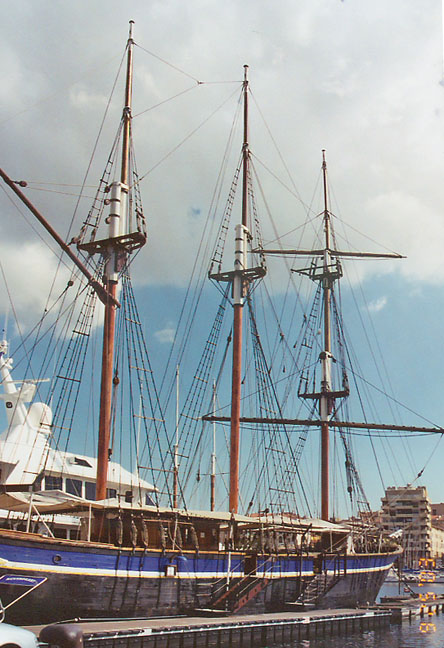 yachts have replaced the sailing ships 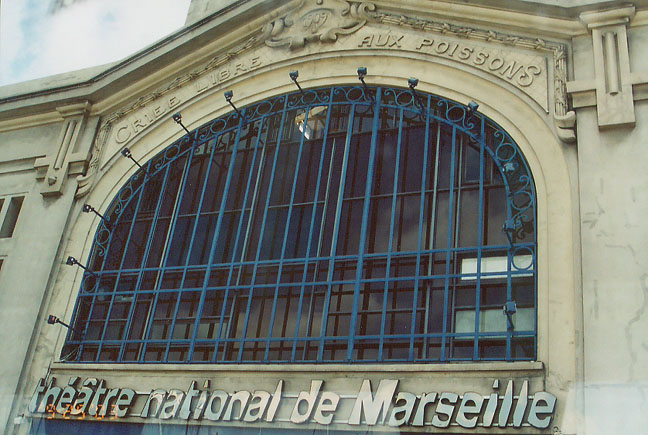 and the old indoor Fish Market, is now the Theatre

During the 12th-14th centuries, Marseilles competed with Genoa for the trade in food and war material for the Crusaders. Marseilles became very prosperous during this period, reaping direct profits as well as ownership of a section of Jerusalem where it had its own church. 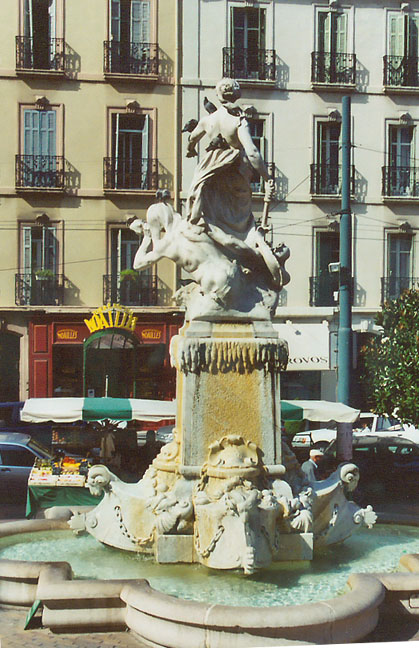 Wealth expanded along with the trade, that spread out across the Mediterranean, until the 15th century. In 1423, Marseilles was pillaged by the fleet from Aragon, but recovered quickly under the influence of the Forbin brothers, two Marseilles merchants. Good King René came to Marseilles in 1423 for a long stay, increasing royal interest in the city. In 1481, Marseilles was brought under the French crown, while remaining a part of Provence. 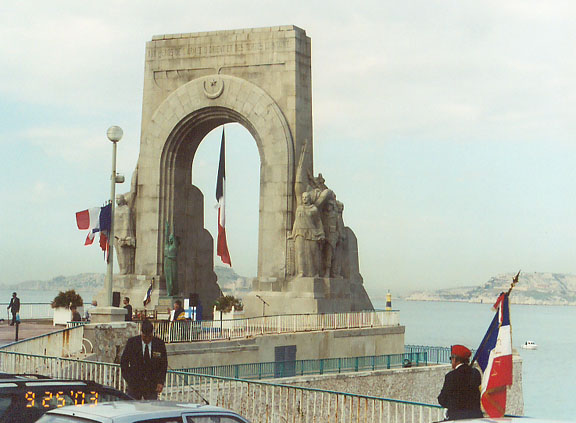 monument of those fallen in the "orient" wars

In 1660, King Louis XIV had the ramparts torn down, and the town began its expansion, for the first time, beyond the original fortified area on the north side of the Old Port. 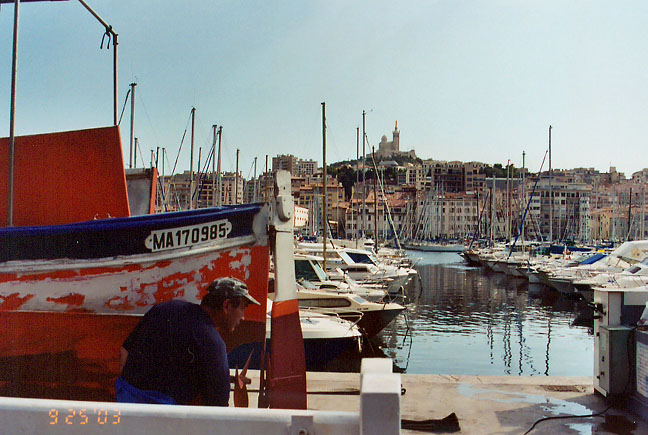 harbor with the church of the sailors in the background 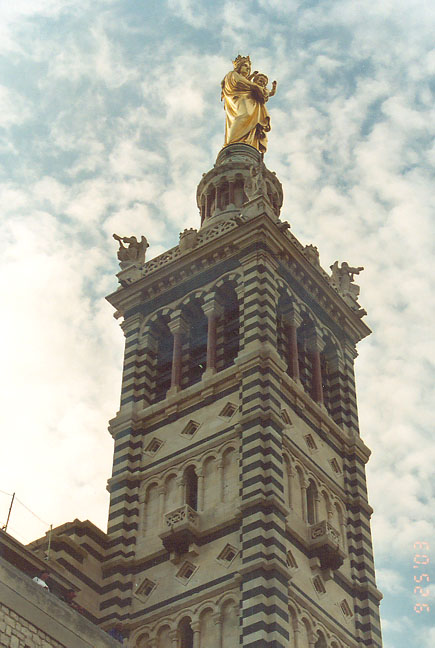 the virgin and child looking to sea

The 19th-century Romano-Byzantine style basilica is located on a hilltop with a fantastic view -- where the town's lookout post once stood. A chapel was built on the hilltop in the 13th century, and became a priory for the monks of St Victor. In the 16th century, the church was fortified, to defend against a threatened invasion by Charles V of Spain. In 1853, work started on the basilica, that was completed in 1899. The basilica is topped by a huge gilded statue of the Virgin, who is standing on top of basilica's 60-m high belfry. 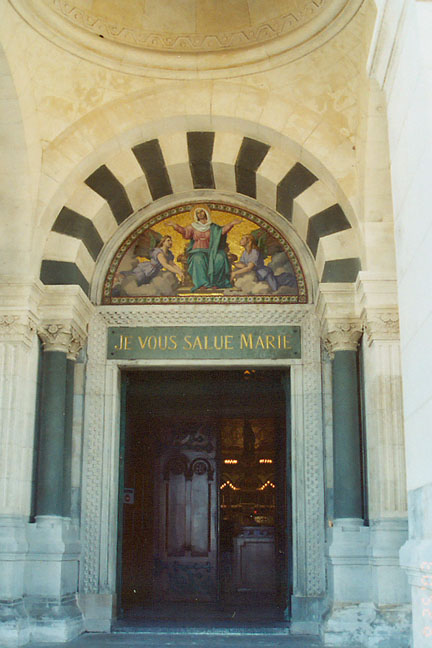 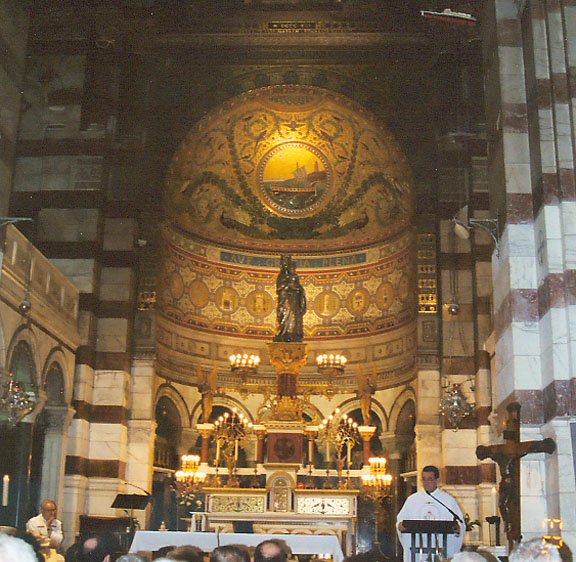 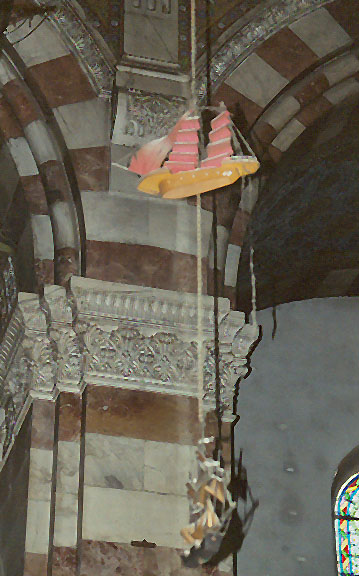 boat models hanging in the church 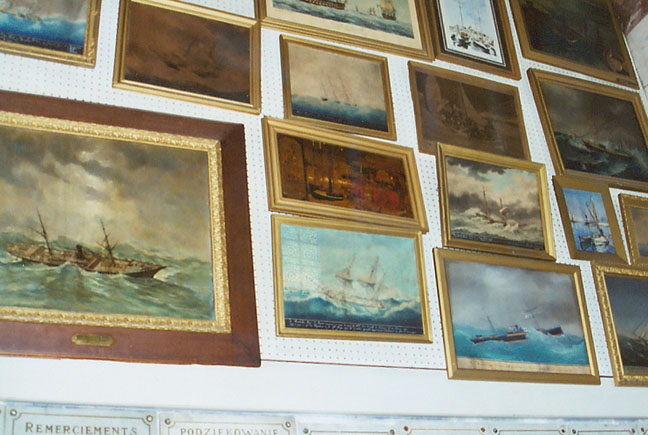 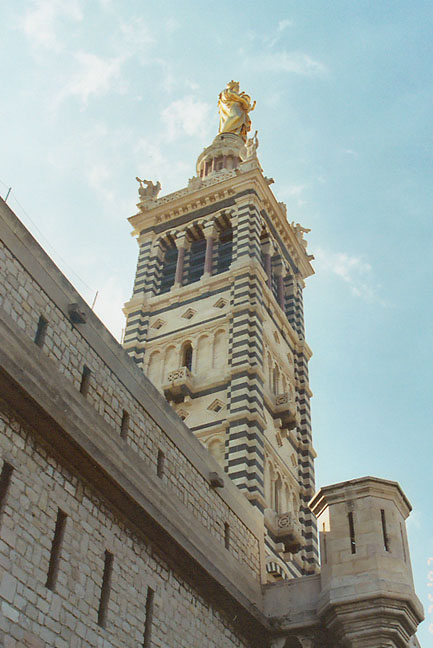 side view of the basilica and belfry 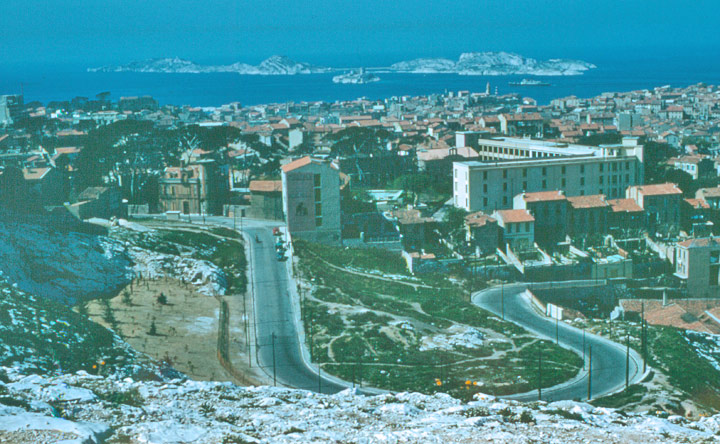 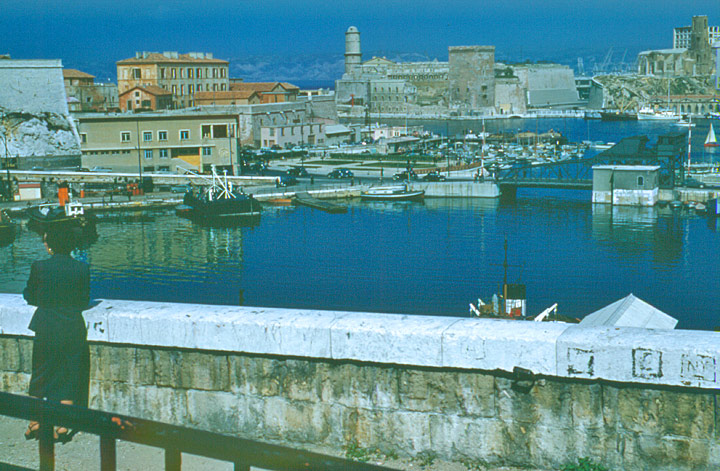