over the bridge heading to the Chaco

The Gran Chaco (Quechua chaku, "hunting land") is a sparsely populated, hot and semi-arid lowland natural region of the Río de la Plata basin, divided among eastern Bolivia, Paraguay, northern Argentina and a portion of the Brazilian states of Mato Grosso and Mato Grosso do Sul, where it is connected with the Pantanal region. This land is sometimes called the Chaco Plain.

Very approximate location and borders of the Gran Chaco. The natural border to the west is the Andes and, to the east, the Paraguay River. Northern and southern borders are a bit less well-defined.

Historically the Chaco has been divided in three main parts: the Chaco Austral or Southern Chaco, south of the Bermejo River and inside Argentinian territory, blending into the Pampa region in its southernmost end; the Chaco Central or Central Chaco between the Bermejo and the Pilcomayo River to the north, also now in Argentinean territory; and the Chaco Boreal or Northern Chaco, north of the Pilcomayo up to the Brazilian Pantanal, inside Paraguayan territory and sharing some area with Bolivia. 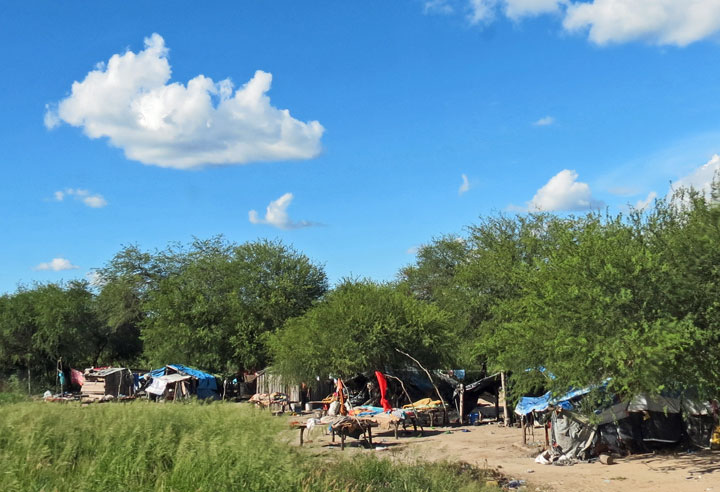 Nowadays locals sometimes divide it simply in regard to the political borders, giving rise to the terms Argentinean Chaco, Paraguayan Chaco and Bolivian Chaco. (Inside Paraguay, people sometimes use the expression Central Chaco to the area roughly in the middle of the Chaco Boreal, where Mennonite colonies are established.)

The Chaco Boreal may be divided furthermore in two: closer to the mountains in the west, the Alto Chaco, or Upper Chaco, sometimes known as Chaco Seco or Dry Chaco, is very dry and sparsely vegetated, continuing eastward where less arid conditions combined with favorable soil characteristics permit a seasonally dry higher growth thorn tree forest, and further east again where still higher rainfall combined with improperly drained lowland soils lead to a somewhat swampy plain called the Bajo Chaco or Lower Chaco, sometimes known as Chaco Húmedo or Humid Chaco, with a more open savanna vegetation consisting of palm trees, quebracho trees and tropical high grass areas with a wealth of insects. The landscape is mostly flat and slopes at a 0.004 degree gradient to the east. This area is also one of the distinct physiographic provinces of the Parana-Paraguay Plain division. 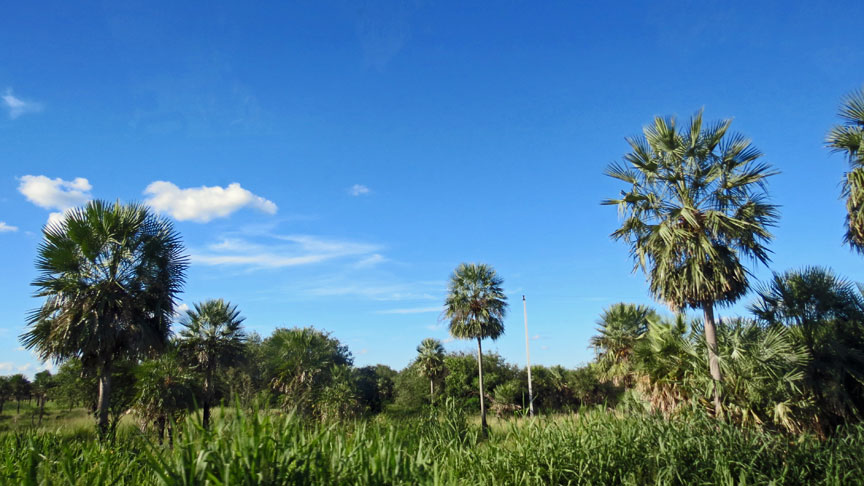 The areas more hospitable to development are along the Paraguay, Bermejo and Pilcomayo Rivers. It is a great source of timber and tannin, which is derived from the native quebracho tree. Special tannin factories have been constructed there. The wood of the palo santo from the Central Chaco is the source of oil of guaiac (a fragrance for soap). Paraguay also cultivated mate in the lower part of Chaco. 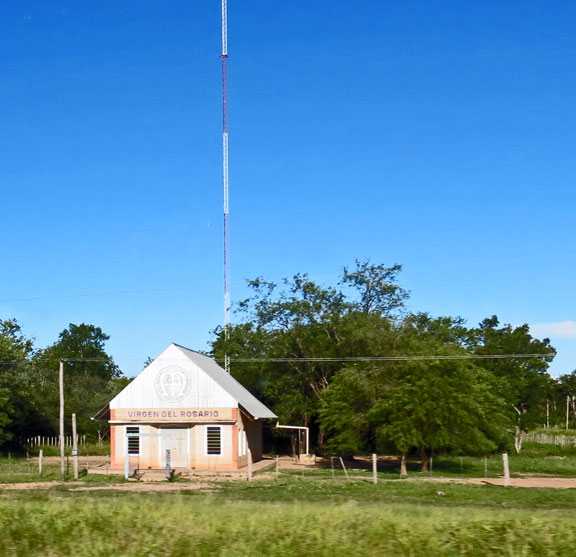 Large tracts of the central and northern Chaco have high soil fertility, sandy alluvial soils with elevated levels of phosphorus[1] and a topography that is favorable for agricultural development, but in combination with aspects that are challenging for farming: a semi-arid to semi-humid climate (600–1300 mm annual rainfall) with a six-month dry season and sufficient fresh groundwater restricted to roughly one third of the region, two thirds being without groundwater or with groundwater of high salinity. Soils are generally erosion prone once the forest has been cleared. In the central and northern Paraguay Chaco occasional dust storms have caused major top soil loss.

The Gran Chaco had been a disputed territory since 1810. Officially, it was supposed to be part of Argentina, Bolivia and Paraguay, although a bigger land portion west of the Paraguay River had belonged to Paraguay since its independence. Argentina claimed territories south of the Bermejo River until Paraguay's defeat in the War of the Triple Alliance in 1870 established its current border with Argentina.

Over the next few decades, Bolivia began to push the natives out and settle in the Gran Chaco while Paraguay ignored it. Bolivia sought the Paraguay River for shipping oil out into the sea (it had become a land-locked country after the loss of its Pacific coast in the War of the Pacific) and Paraguay claimed ownership of the land. This became the backdrop to The Gran Chaco War (1932–1935) (though violence started as early as December 5, 1928) between Paraguay and Bolivia over supposed oil in the Chaco Boreal (the aforementioned region north of the Pilcomayo River and to the west of the Paraguay River). Eventually, Argentine Foreign Minister Carlos Saavedra Lamas mediated a cease fire and subsequent treaty signed in 1938, which gave Paraguay three quarters of the Chaco Boreal and gave Bolivia a corridor to the Paraguay River with the ability to use the Puerto Casado and the right to construct their own port. In the end, oil was not found in the region.


Mennonites came into the Paraguayan part of the region from Canada in the 1920s; more came from the USSR in the 1930s and immediately following World War II. These immigrants created some of the largest and most prosperous municipalities in the deep Gran Chaco. 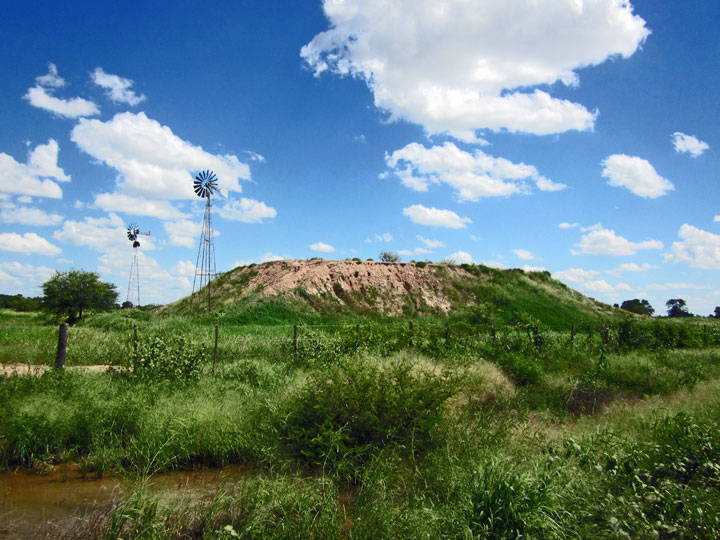 wind power used to pump water into the reservoir

The region is home to over nine million people, divided about evenly between Argentina, Bolivia, Brazil, and including around 100,000 in Paraguay. The area remains relatively underdeveloped, however; to help address this, in the 1960s the Paraguayan authorities had the Trans-Chaco Highway built and the Argentine National Highway Directorate, National Routes 16 and 81. All three highways extend about 700 km (430 mi) from east to west and are now completely paved, as are a network of nine Brazilian highways in Mato Grosso do Sul State. 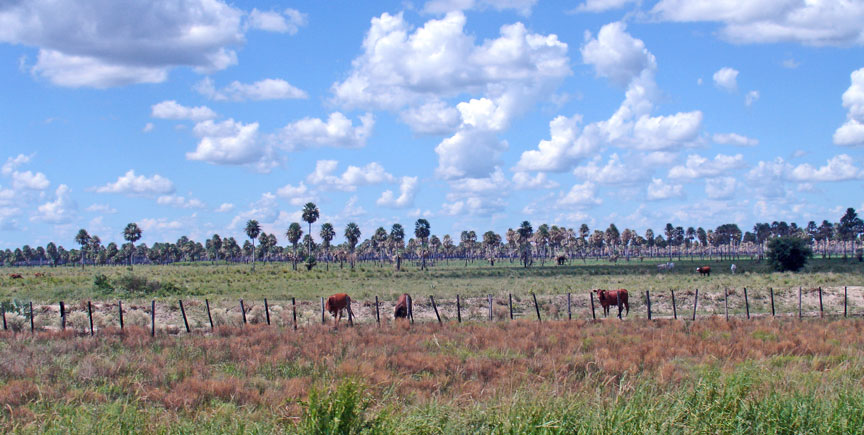 The Gran Chaco has some of the highest temperatures on the continent.

The floral characteristics of the Gran Chaco are varied given the large geographical span of the region. The dominant vegetative structure is xerophytic deciduous forests with multiple layers including a canopy, sub-canopy, shrub layer and herbaceous layer. There are ecosystems such as riverine forests, wetlands, savannas, and cactus stands as well.

At higher elevations of the eastern zone of the Humid/Sub-humid Chaco there are transitional mature forests from the wet forests of Southern Brazil. These woodlands are dominated by canopy trees such as Tabebuia impetiginosa and characterized by frequent lianas and epiphytes. This declines to seasonally flooded forests, at lower elevations, that are dominated by Schinopsis spp., a common plains tree genus often harvested for its tannin content and dense wood. The understory comprises bromeliad and cactus species as well as hardy shrubs like Schinus fasciculatus. These lower areas lack lianas but have abundant epiphytic species like Tillandsia. The river systems that flow through the area, such as the Rio Paraguay and Rio Parana allow for seasonally flooded semi evergreen gallery forests that hold riparian species such as Tessaria integrifolia and Salix humboltiana. Other seasonally flooded ecosystems of this area include palm dominated (Copernicia alba) savannas with a bunch grass dominated herbaceous layer. 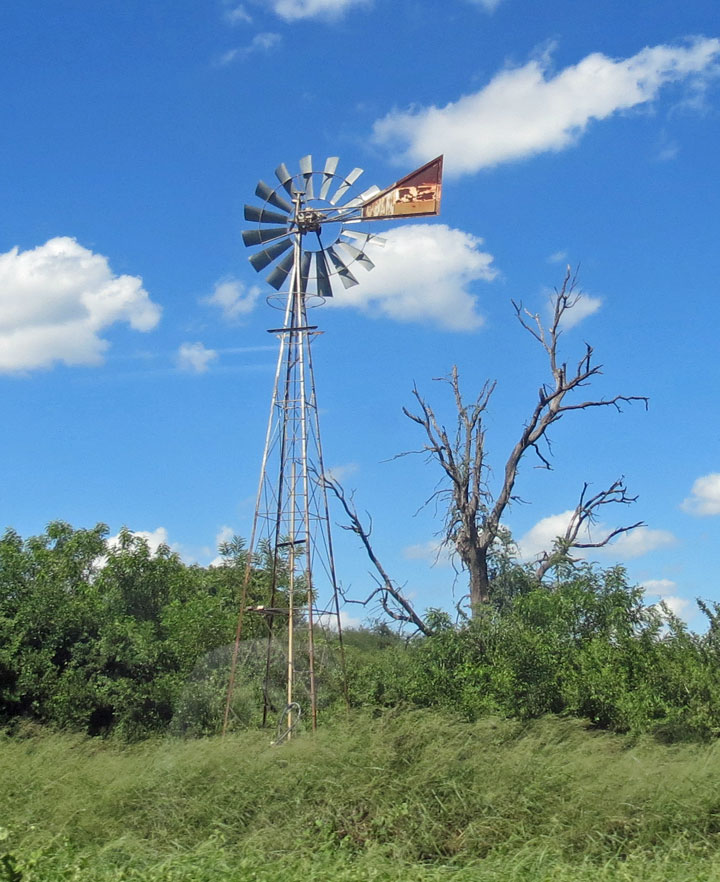 To the west, in the Semi-Arid/Arid Chaco, there are medium sized forests consisting of Aspidospermum quebracho-blanco and Schinopsis quebracho with a slightly shorter subcanopy made up of several species from the Fabaceae family as well as several arboreal cacti species that distinguish this area of the Chaco. There is a scrub-like shrub and herbaceous layer. On sandy soils, the thick woodlands turn into savannas where the aforementioned species prevail as well as species like Jacaranda mimosifolia. The giant Stetsonia coryne, found throughout the western Semi-Arid/Arid region becomes very conspicuous in these sandy savannas. There are various upland systems of plant associations that occur throughout the Gran Chaco. The Highlands of the Argentenian Chaco are made up of, on the dry, sunny side (up to 1800m), Schinopsis haenkeana woodlands. The cooler side of the uplands hosts Zanthoxylum coco (locally referred to as Fagara coco) and Schinus molleoides (locally referred to as Lithrea molleoides) as the predominant species. Other notable species include Bougainvillea stipitata, and several spp. from Fabaceae. The Paraguyan uplands have other woodland slope ecosystems, notably, those dominated by Anadenanthera colubrina on moist slopes. Both of these upland systems, as well as a lot of other areas in the Gran Chaco are rich with endemism.

Faunal diversity in the Gran Chaco is high as well. Animals regularly associated with tropical and subtropical forests are often found throughout the eastern humid chaco including jaguars, howler monkeys, peccaries, deer, and tapirs. Edentate species, including anteaters and armadillos are readily seen here as well. Being home to at least ten species, armadillos are at their peak diversity in the Argentenian Chaco. Included in the species present are both the Nine-banded Armadillo (Dasypus novemcinctus) whose range extends north to the southern US, and the Southern Three-banded Armadillo (Tolypeutes matacus). The Pink Fairy Armadillo (Chlamyphrous truncates), is found nowhere else in the world. The Giant Armadillo (Priodontes maximus), while not found in the eastern humid Chaco, can be seen in the drier arid Chaco of the west. Some other notable endemics of the region include the San Luis Tuco-tuco (Ctenomys pontifex). This small rodent is only found in the Argentenian Chaco. All of 60 species of Ctenomys are endemic to the continent of South America. The Chacoan Peccary (Catagonus wagneri), locally known as tauga, is the largest of the three peccary species found in the area. This species was thought to be extinct by scientists until 1975, when it was recorded by Dr. Ralph Wetzel. 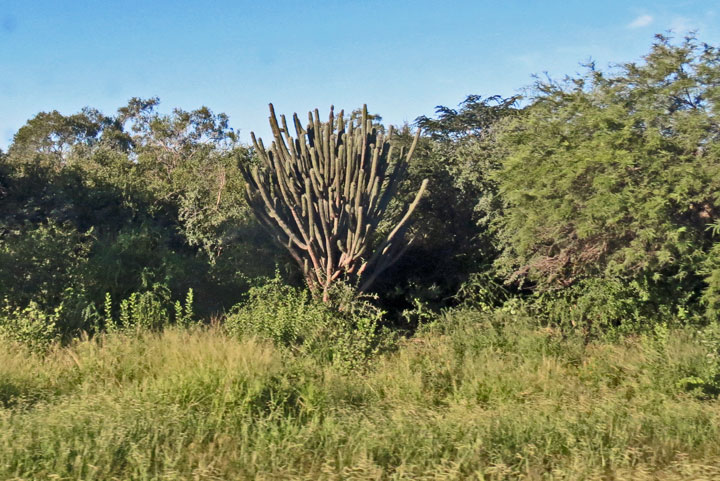 Due to the climatic regime of the Gran Chaco, herptopfauna are restricted to moist refugium in various places throughout the chaco. Rotting logs, debris piles, old housing settlement, wells, and seasonal farm ponds are examples of such refugia. The Black-legged Serieman (Chunga burmeisteri), Blue-crowned Parakeet (Aratinga acuticadauta), Picui Ground Dove (Columbina picui), Guira Cuckoo (Guira guira), Little Thornbird (Phacellodomus sibilatrix) and Many-colored Chaco Finch (Saltaitricula multicolor) are notable of the 409 bird species that are resident or breed in the Gran Chaco. 252 of these chaco species are endemic to South America. 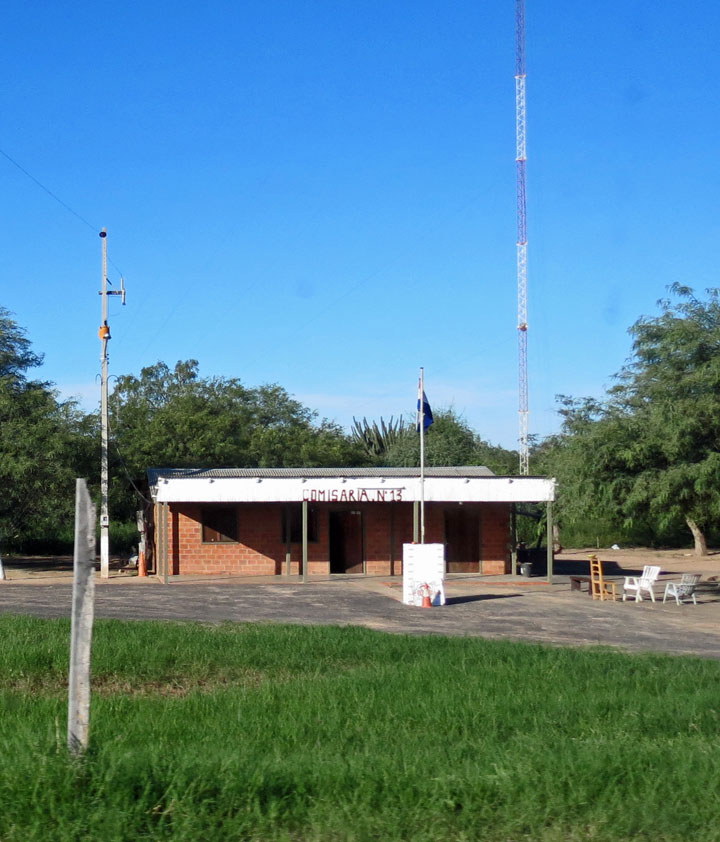 In September 1995, the Kaa Iya del Gran Chaco National Park was established in an area of the Chaco in Bolivia. It is administered and was established solely by the indigenous peoples, including the Izoceño Guaraní, the Ayoreode, and the Chiquitano. 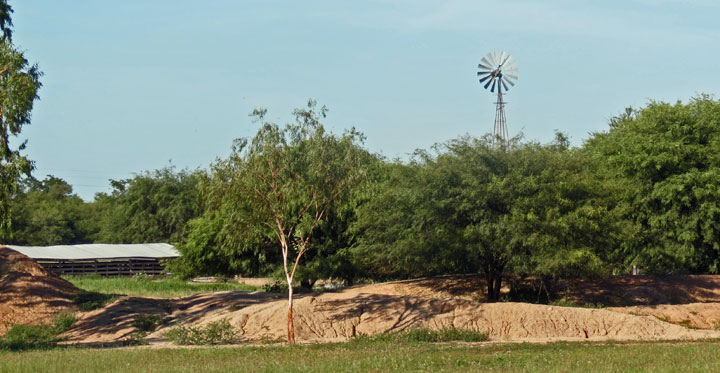 The Chaco is one of South America's last agricultural frontiers. Very sparsely populated and lacking sufficient all-weather roads and basic infrastructure (the Argentinean part is more developed than the Paraguayan or Bolivian part), it has long been too remote for crop planting. The central Chaco's Mennonite colonies are a notable exception.

Two factors may substantially change the Chaco in the near future: low land valuations and the region's suitability to grow fuel crops. Suitability for the cultivation of Jatropha has been proven. Sweet sorghum as an ethanol plant may prove viable, too, since sorghum is a traditional local crop for domestic and feedstock use. The feasibility of switchgrass is currently being studied by Argentina's INTA, as is the Karanda’y palm tree in the Paraguayan Chaco.

While advancements in agriculture will bring some improvements in infrastructure and employment for this traditionally rather neglected and impoverished region, loss of habitat / virgin forest is substantial. Paraguay, after having lost more than 90% of its Atlantic Rainforest between 1975 and 2005, is now losing its xenopheric forest (dry forests) in the Chaco at an annual rate of 220.000 hectare (2008) In mid 2009 a projected law, initiated by the Libiral Party, that would have outlawed deforestion in the Paraguay Chaco altogether, "Deforestacion Zero en el Chaco" did not get a majority in the Paraguay Parliament. 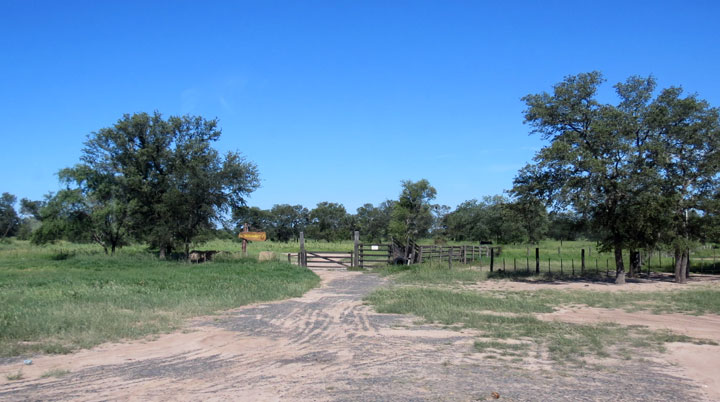 Deforestation in the Argentinean part of the Chaco amounted to an average of 100.000 hectares per year between 2001 and 2007.

ovens for converting wood to charcoal 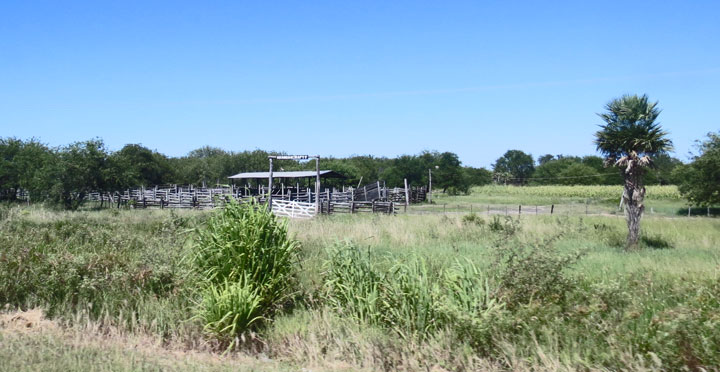 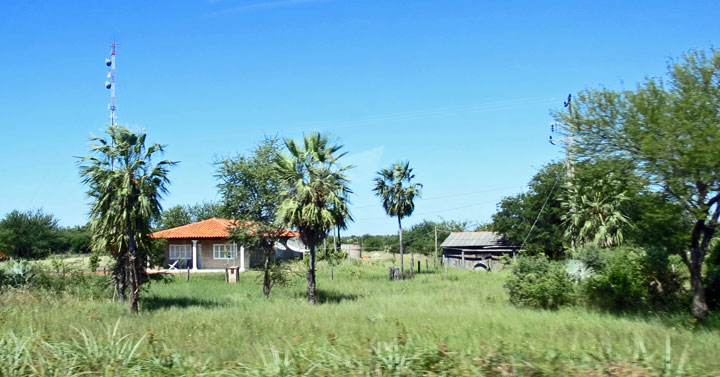 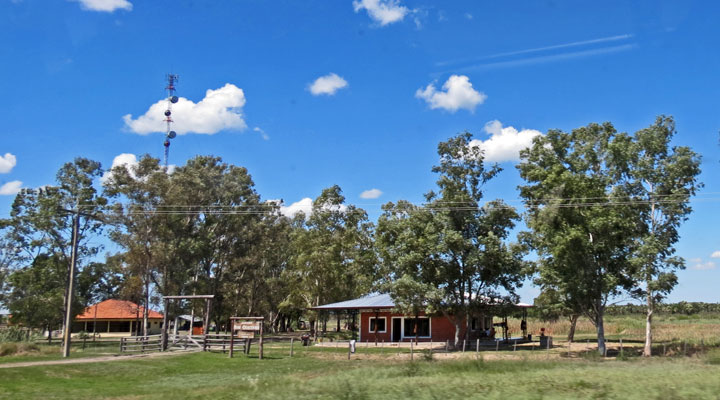 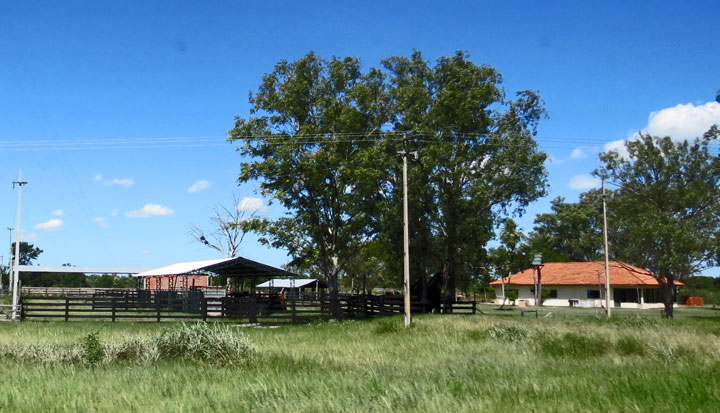 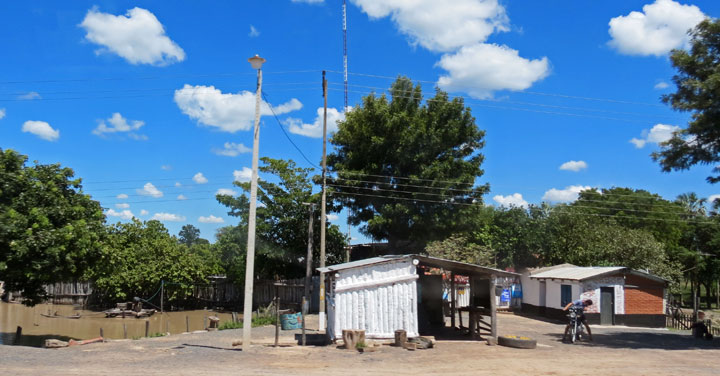 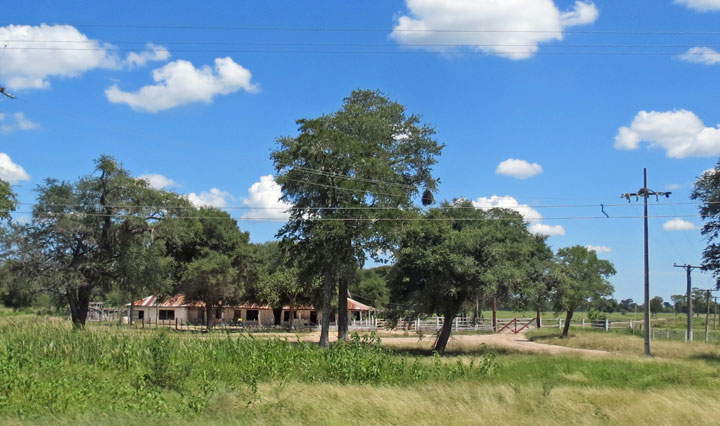 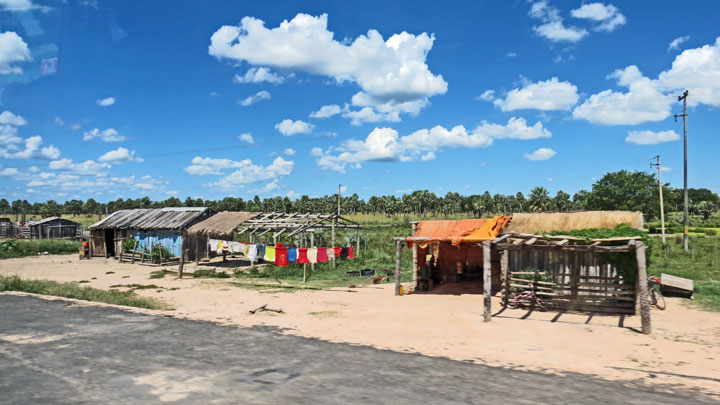 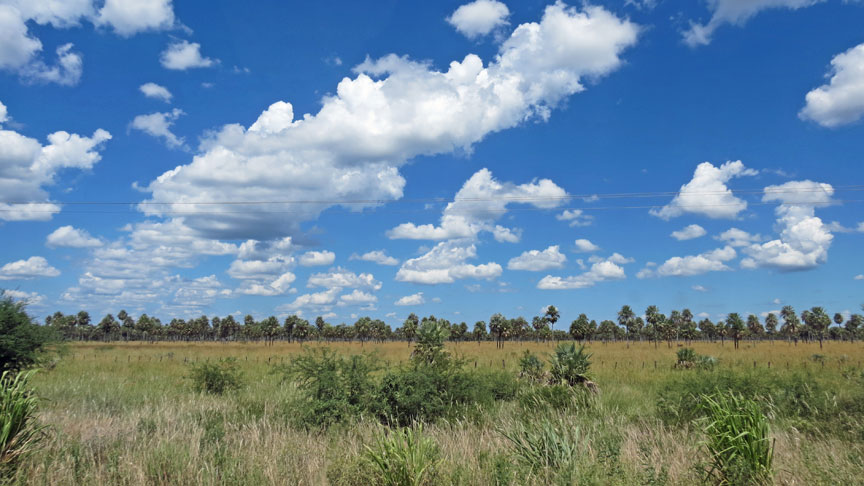 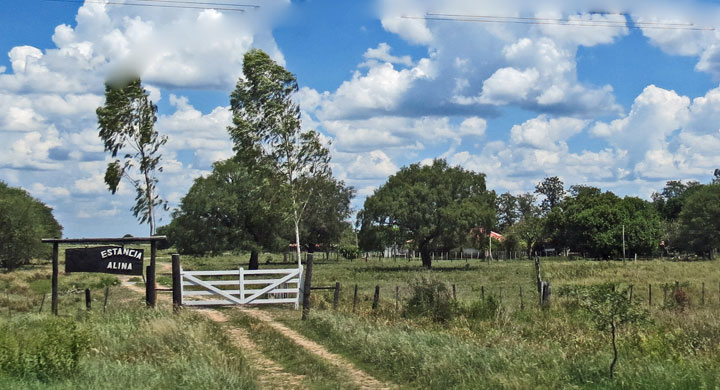 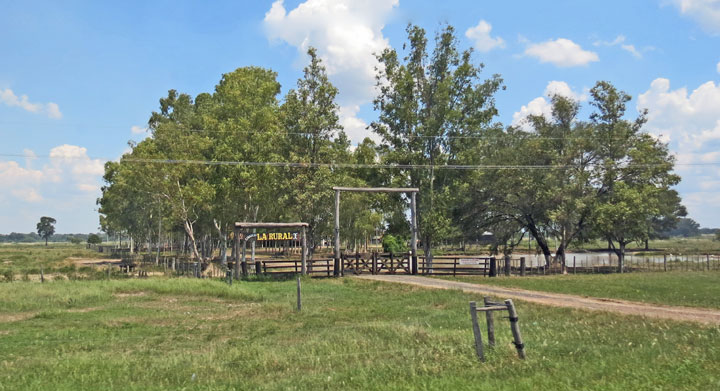