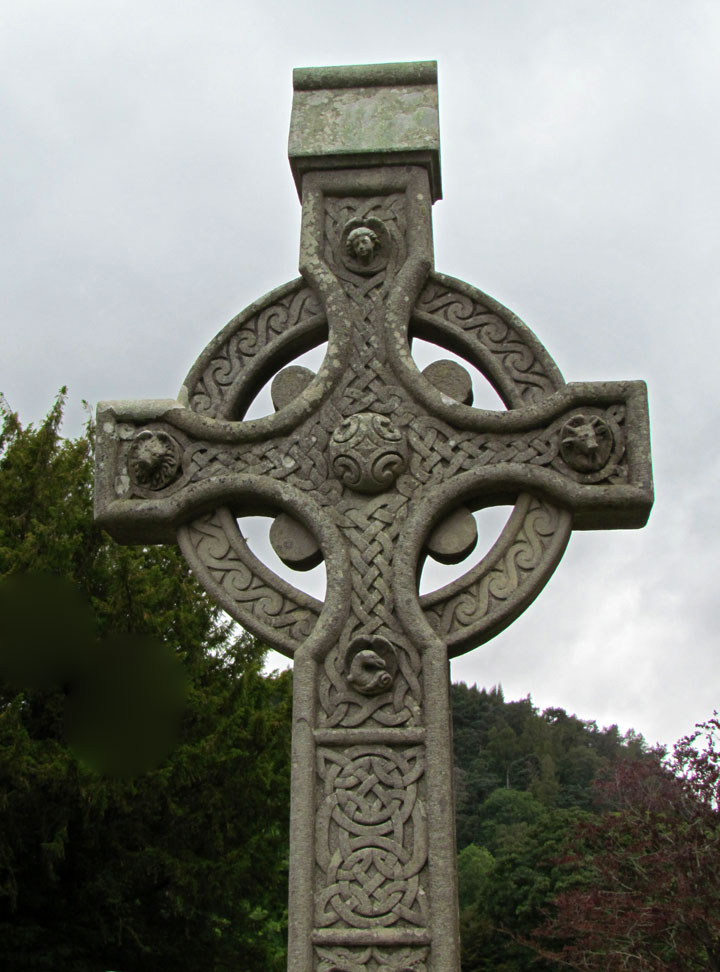 Glendalough (Irish: Gleann Dá Loch, meaning "Glen of Two Lakes") is a glacial valley located in County Wicklow, Ireland, renowned for its Early Medieval monastic settlement founded in the 6th century by St Kevin, a hermit priest, and destroyed in 1398 by English troops. 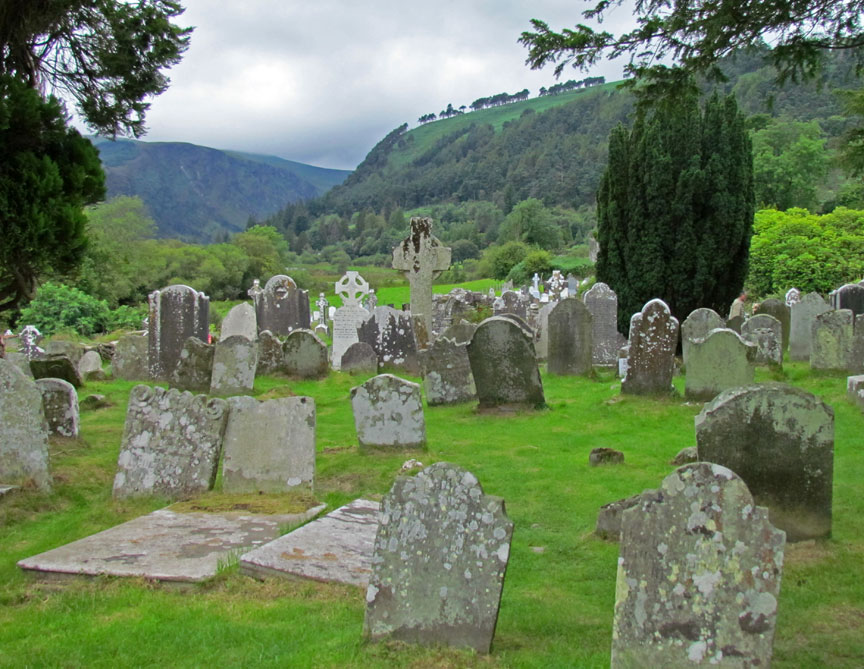 Kevin, a descendant of one of the ruling families in Leinster, studied as a boy under the care of three holy men, Eoghan, Lochan, and Eanna. During this time, he went to Glendalough. He was to return later, with a small group of monks to found a monastery where the 'two rivers form a confluence'. Kevin's writings discuss his fighting "knights" at Glendalough; scholars today believe this refers to his process of self-examination and his personal temptations. His fame as a holy man spread and he attracted numerous followers. He died in about 618. For six centuries afterwards, Glendalough flourished and the Irish Annals contain references to the deaths of abbots and raids on the settlement. 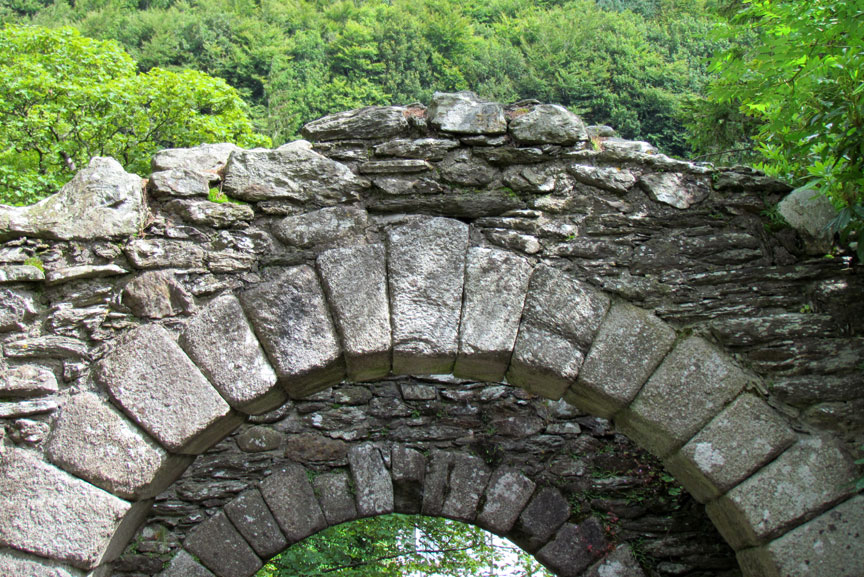 At the Synod of Rath Breasail in 1111, Glendalough was designated as one of the two dioceses of North Leinster. 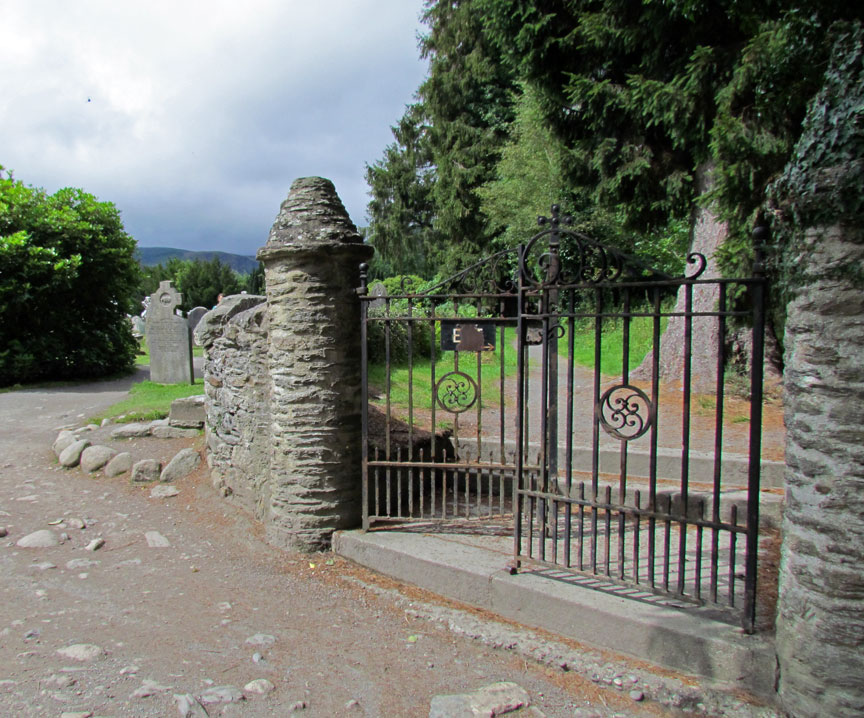 The Book of Glendalough was written there about 1131. 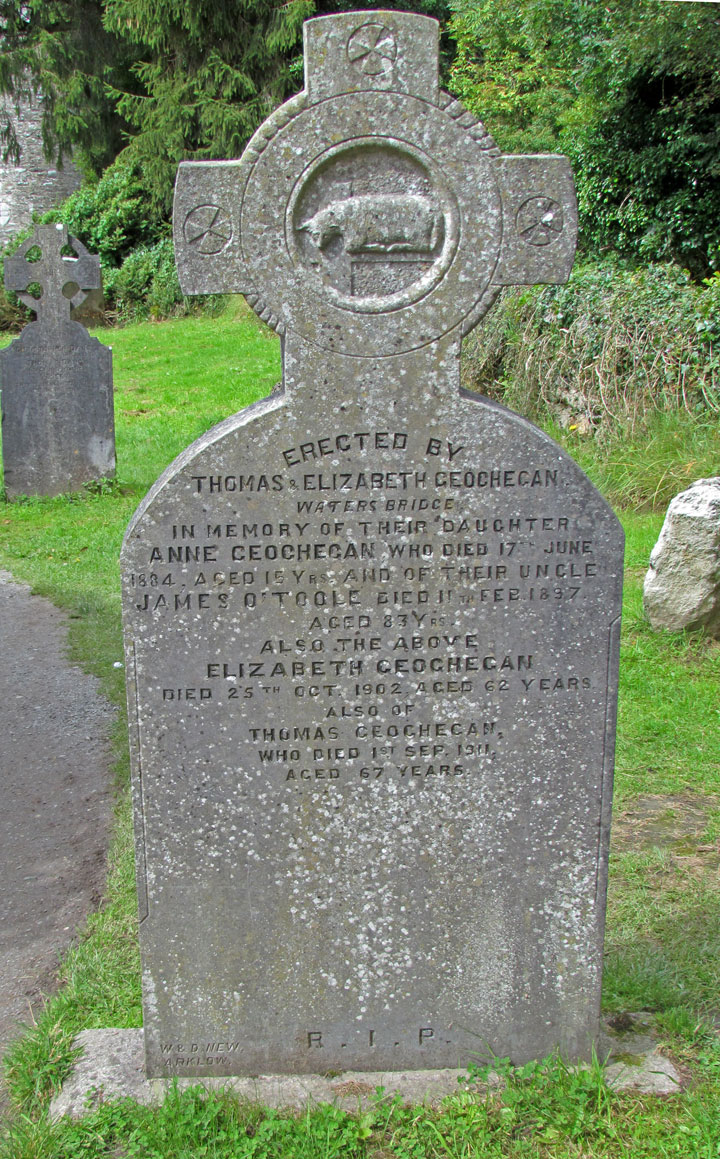 St. Laurence O'Toole, born in 1128, became Abbot of Glendalough and was well known for his sanctity and hospitality. Even after his appointment as Archbishop of Dublin in 1162, he returned occasionally to Glendalough, to the solitude of St. Kevin's Bed. He died in Eu, in Normandy in 1180. 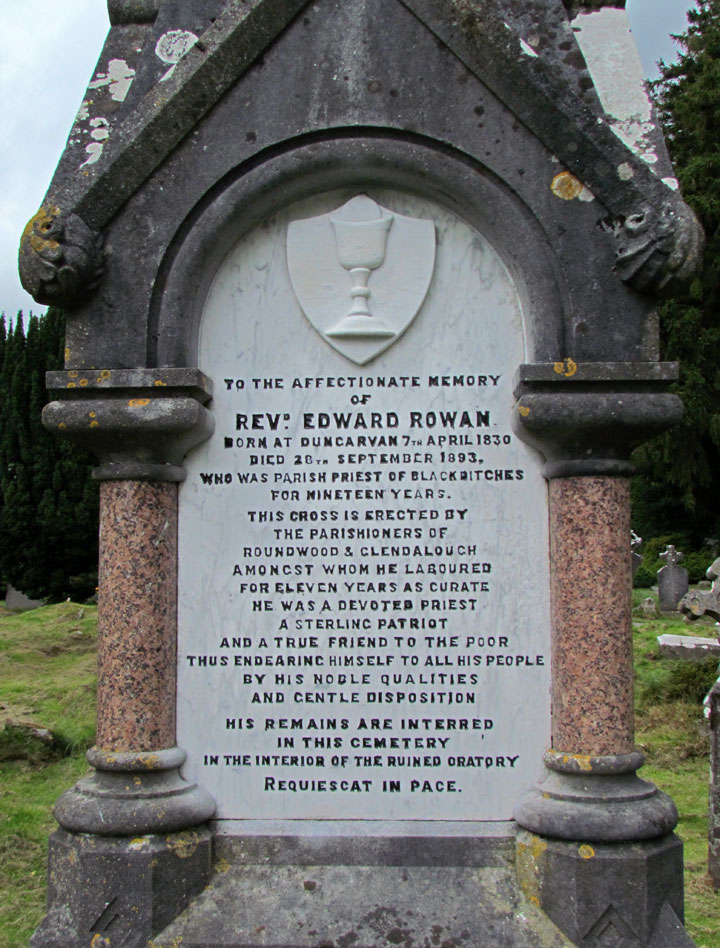 In 1214, the dioceses of Glendalough and Dublin were united. From that time onwards, the cultural and ecclesiastical status of Glendalough diminished. The destruction of the settlement by English forces in 1398 left it a ruin but it continued as a church of local importance and a place of pilgrimage. 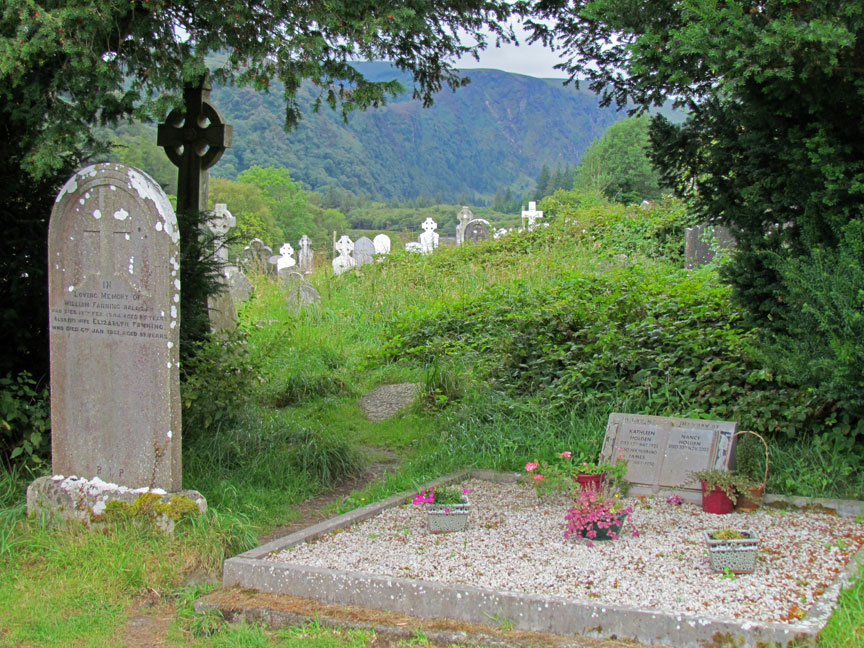 Glendalough features on the 1598 map "A Modern Depiction of Ireland, One of the British Isles" by Abraham Ortelius as "Glandalag". 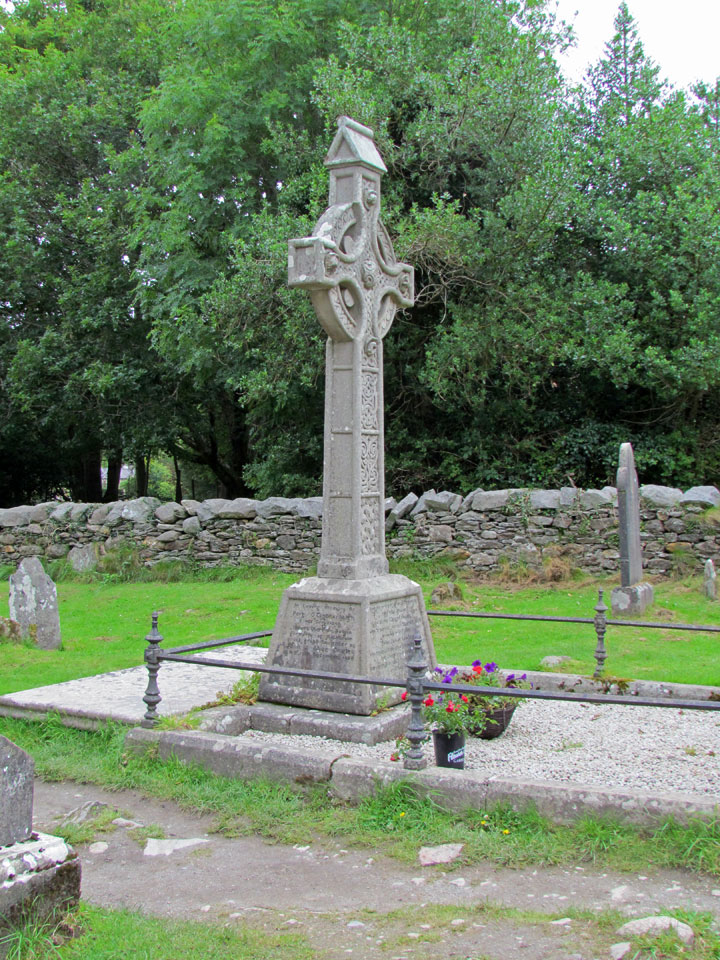 Descriptions of Glendalough from the 18th and 19th centuries include references to occasions of "riotous assembly" on the feast of St. Kevin on 3 June. 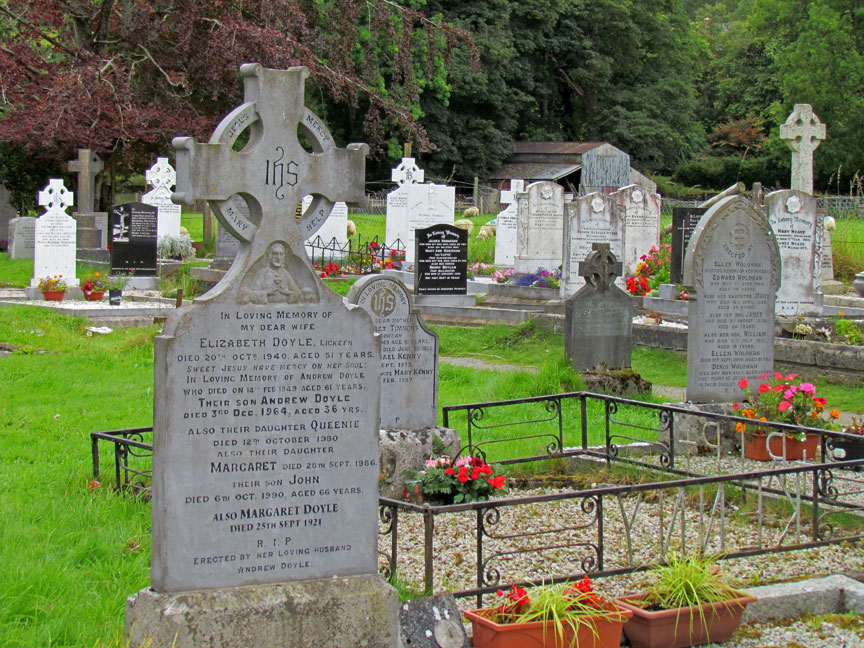 The present remains in Glendalough tell only a small part of its story. The monastery in its heyday included workshops, areas for manuscript writing and copying, guest houses, an infirmary, farm buildings and dwellings for both the monks and a large lay population. The buildings which survive probably date from between the 10th and 12th centuries. 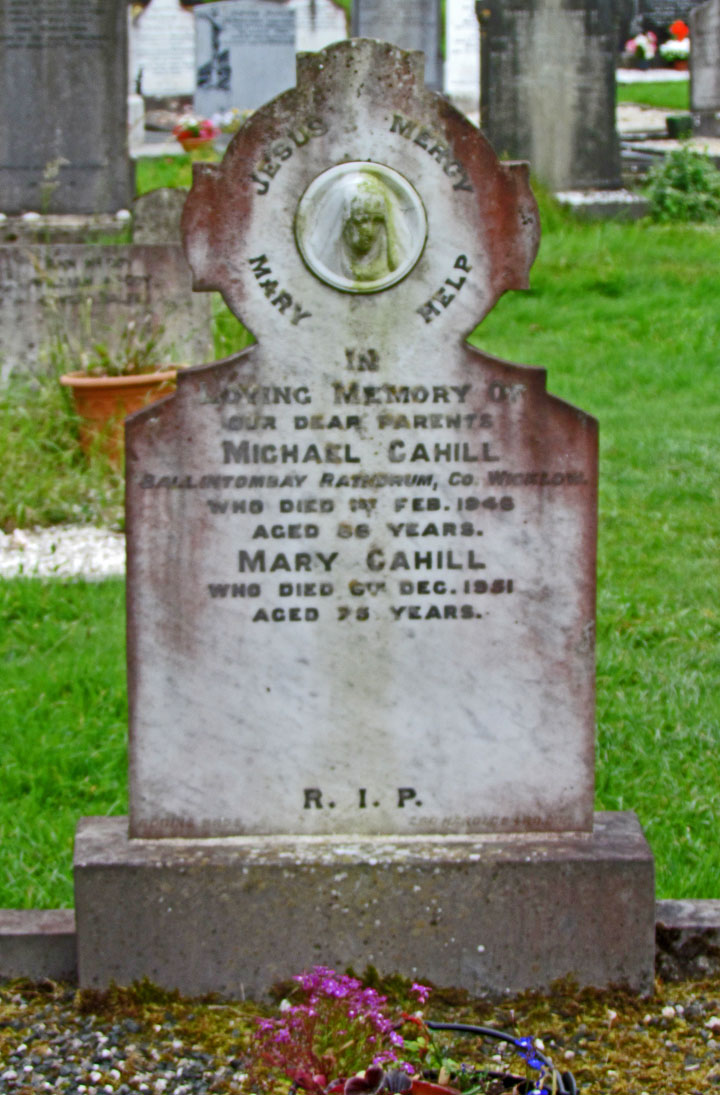 The Gateway to the monastic city of Glendalough is one of the most important monuments, now totally unique in Ireland. It was originally two-storied with two fine, granite arches. The antae or projecting walls at each end suggest that it had a timber roof. Inside the gateway, in the west wall, is a cross-inscribed stone. This denoted sanctuary, the boundary of the area of refuge. The paving of the causeway in the monastic city is still preserved in part but very little remains of the enclosure wall. 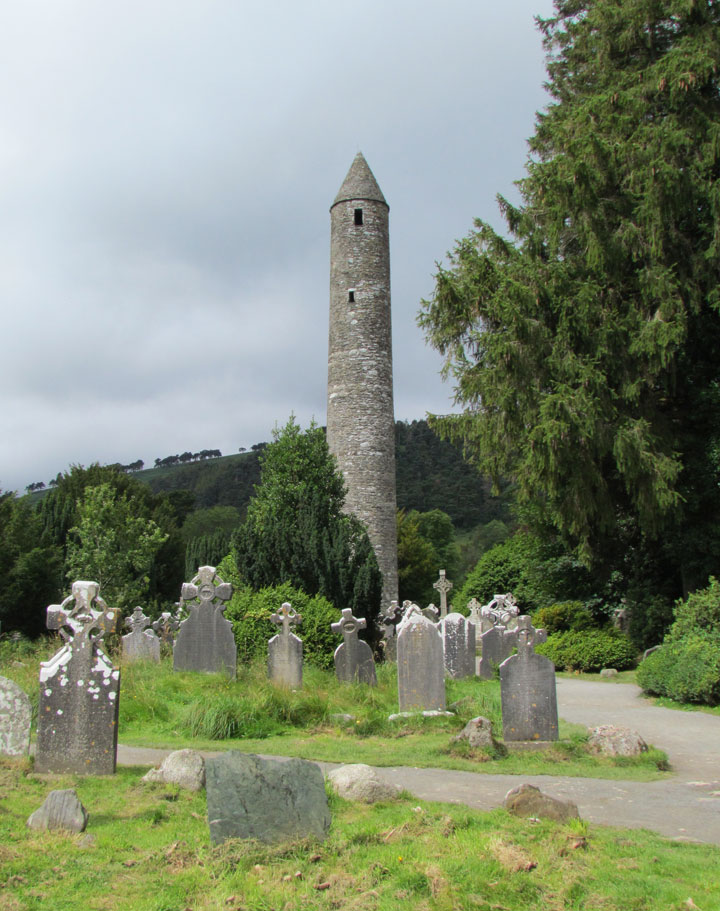 The Round Tower at Glendalough.

This fine tower, built of mica-slate interspersed with granite is about 30 metres high, with an entrance 3.5 metres from the base. The conical roof was rebuilt in 1876 using the original stones. The tower originally had six timber floors, connected by ladders. The four storeys above entrance level are each lit by a small window; while the top storey has four windows facing the cardinal compass points. Round towers, landmarks for approaching visitors, were built as bell towers, but also served on occasion as store-houses and as places of refuge in times of attack. 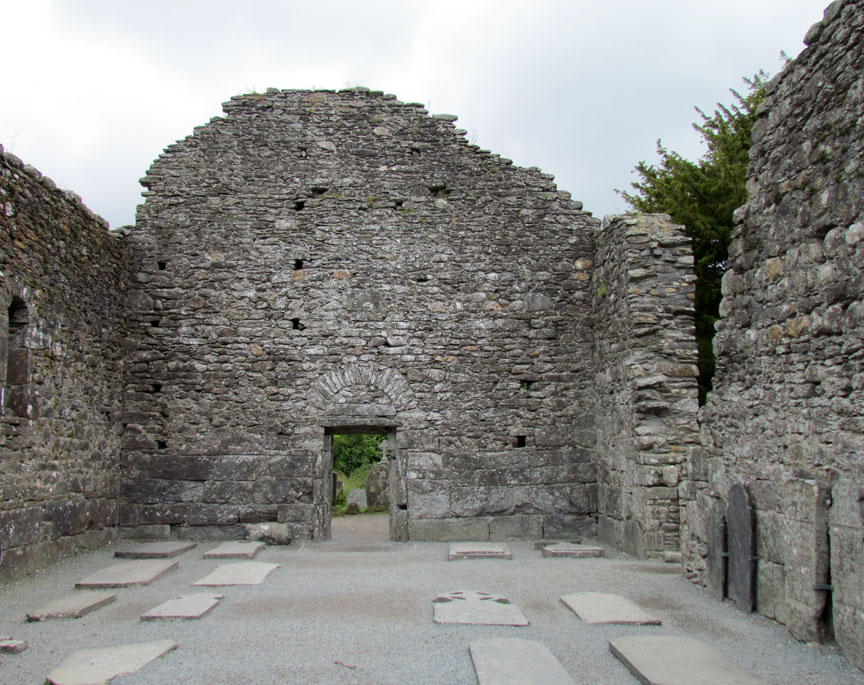 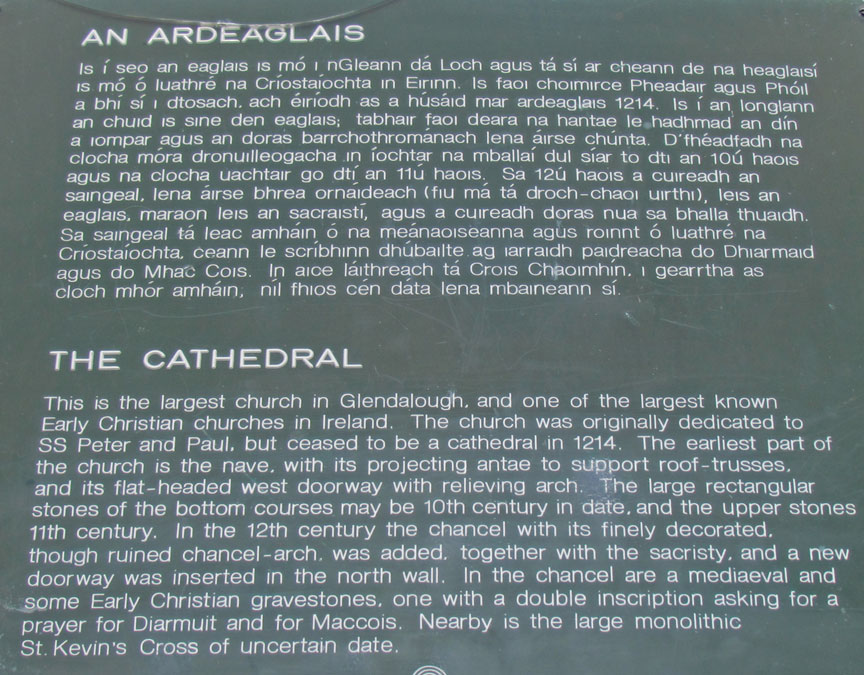 The largest and most imposing of the buildings at Glendalough, the cathedral had several phases of construction, the earliest, consisting of the present nave with its antae. The large mica-shist stones which can be seen up to the height of the square-headed west doorway were re-used from an earlier smaller church. The chancel and sacristy date from the late 12th and early 13th centuries. The chancel arch and east window were finely decorated, through many of the stones are now missing. The north doorway to the nave also dates from this period. Under the southern window of the chancel is an ambry or wall cupboard and a piscina, a basin used for washing the sacred vessels. A few metres south of the cathedral an early cross of local granite, with an unpierced ring, is commonly known as St. Kevin's Cross. 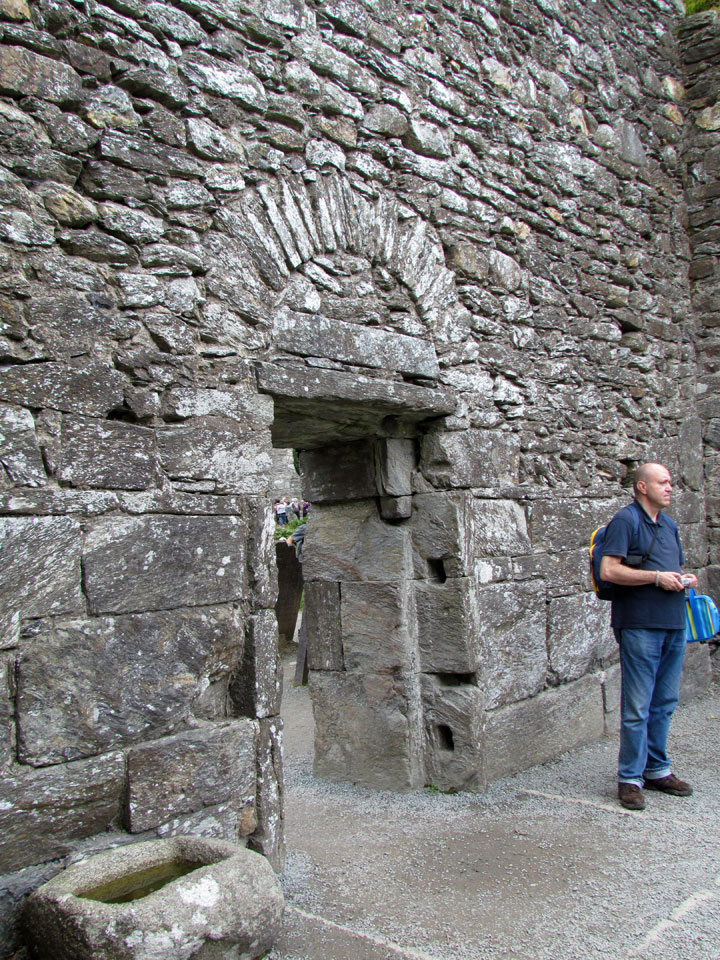 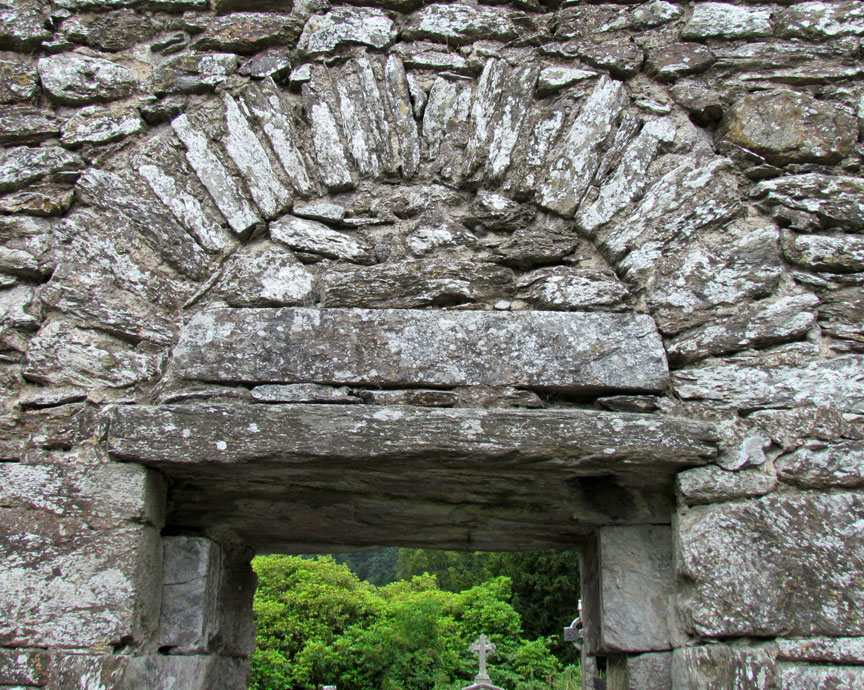 Almost totally reconstructed from the original stones, based on a 1779 sketch made by Beranger, the Priests' House is a small Romanesque building, with a decorative arch at the east end. It gets its name from the practice of interring priests there in the 18th and 19th centuries. Its original purpose is unknown although it may have been used to house relics of St. Kevin. 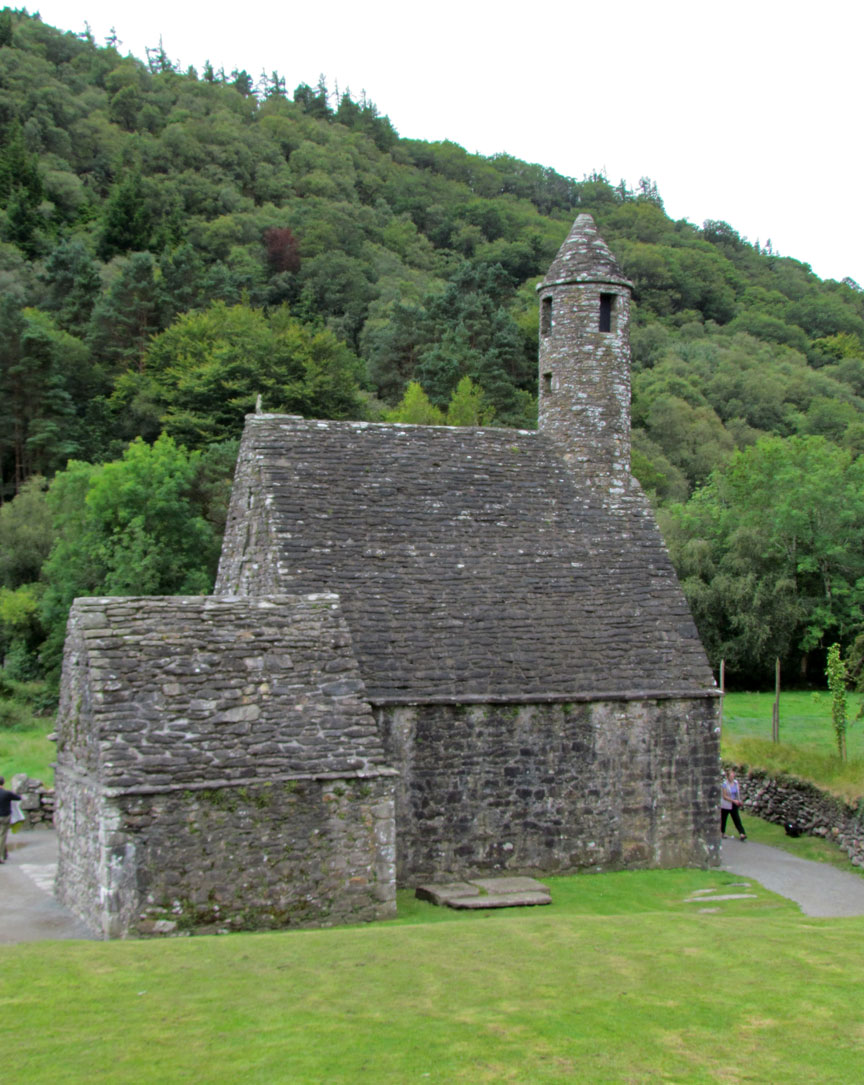 This stone-roofed building originally had a nave only, with entrance at the west end and a small round-headed window in the east gable. The upper part of the window can be seen above what became the chancel arch, when the chancel (now missing) and the sacristy were added later. The steep roof, formed of overlapping stones, is supported internally by a semi-circular vault. Access to the croft or roof chamber was through a rectangular opening towards the western end of the vault. The church also had a timber first floor. The belfry with its conical cap and four small windows rises from the west end of the stone roof in the form of a miniature round tower. 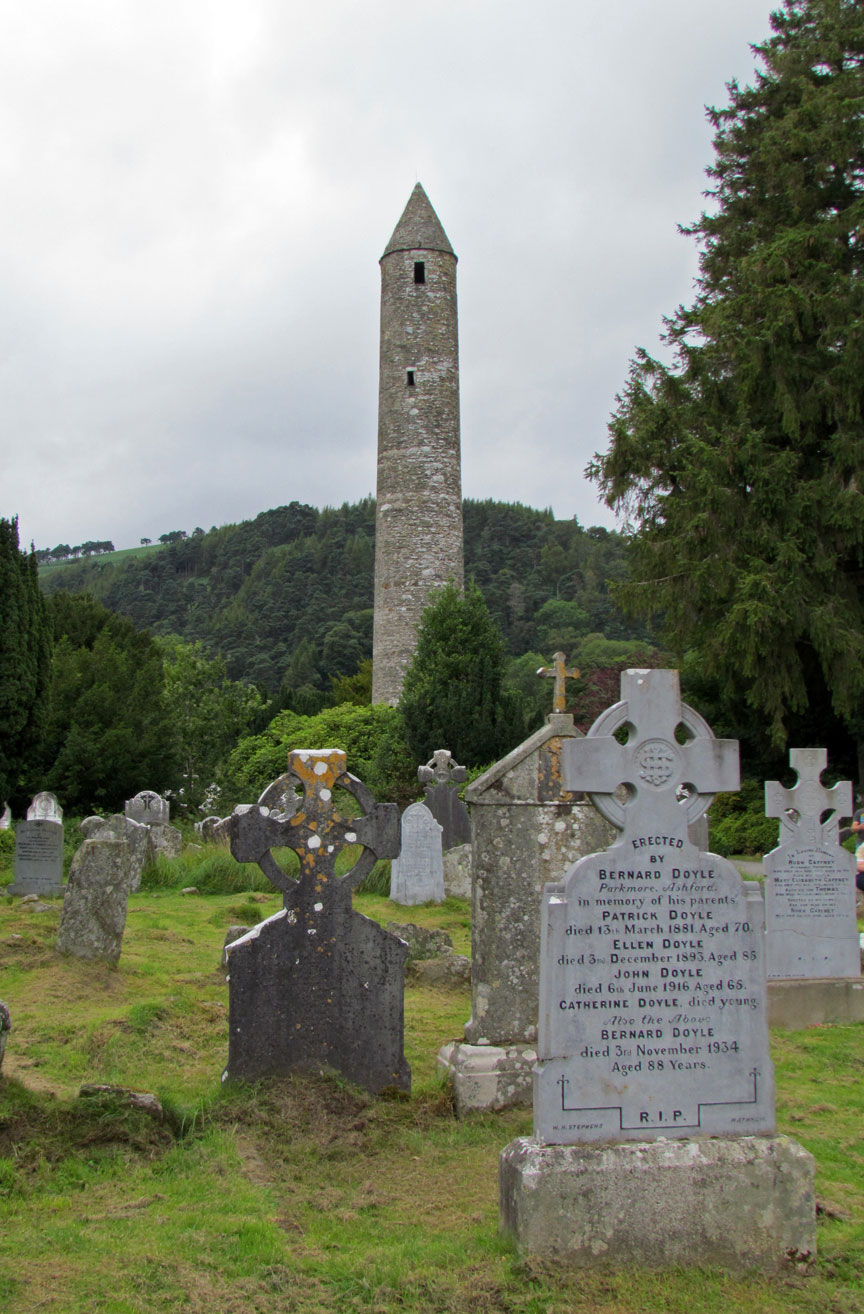 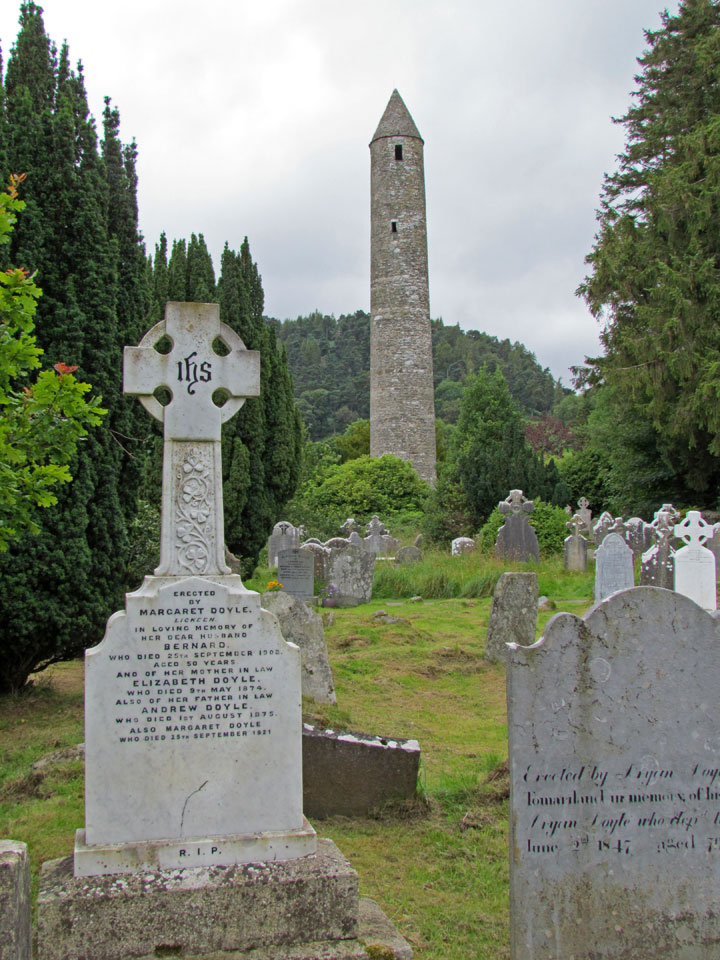 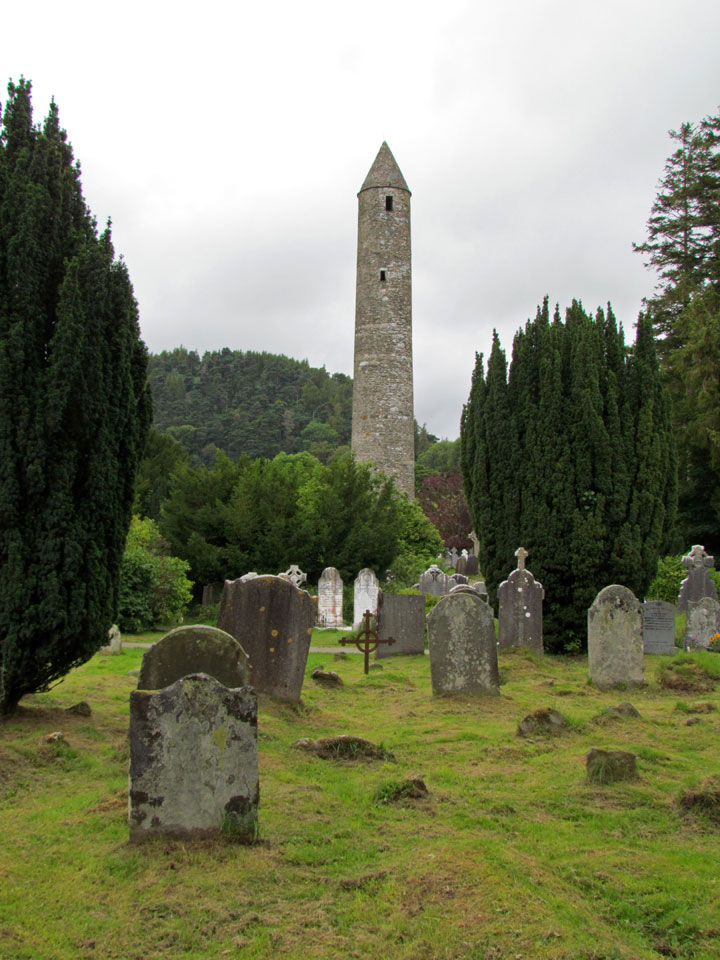 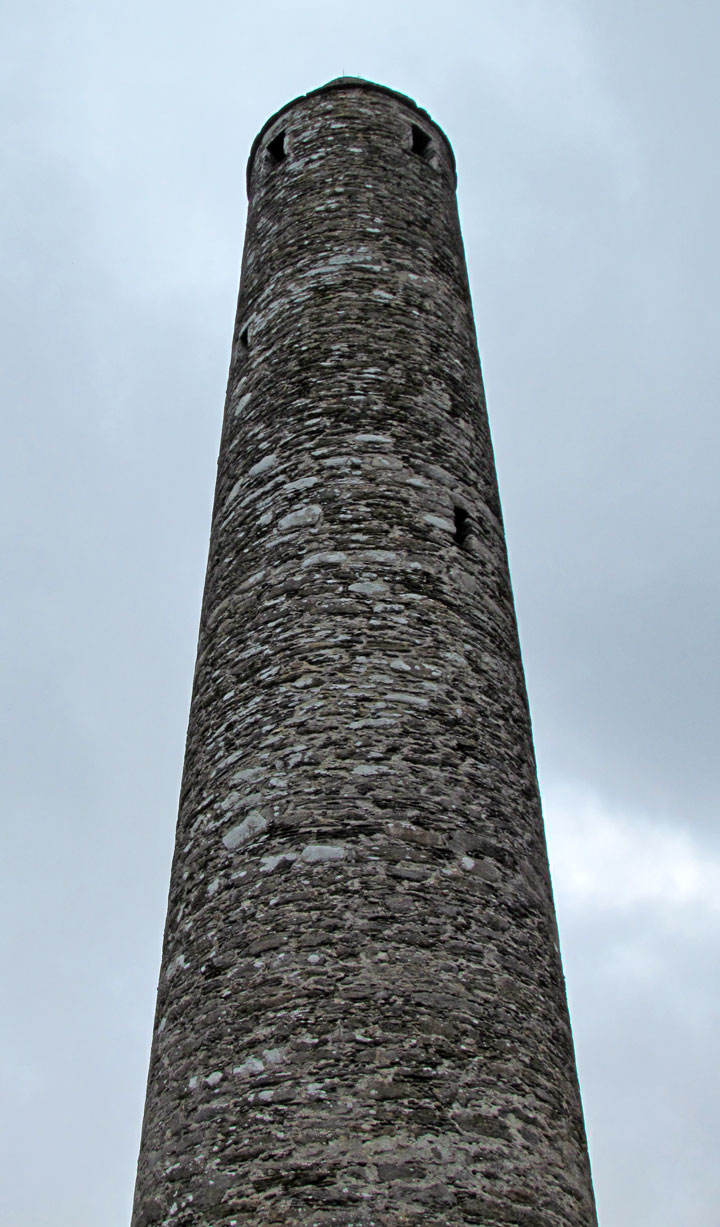 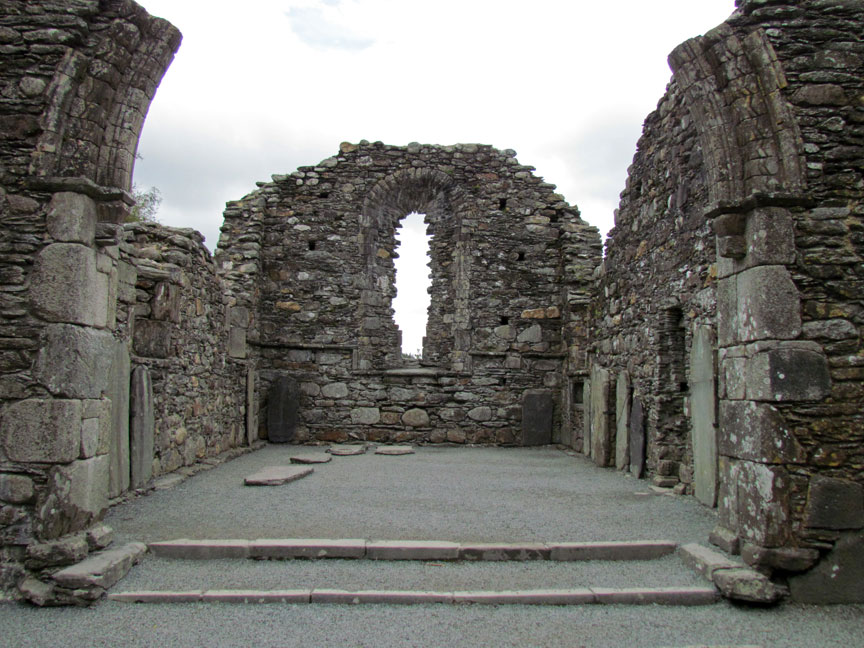 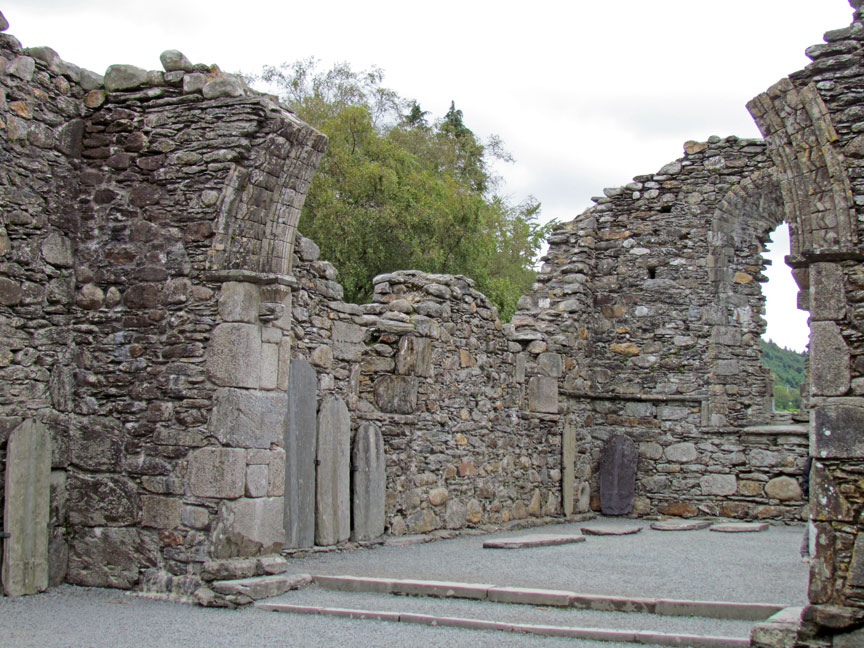 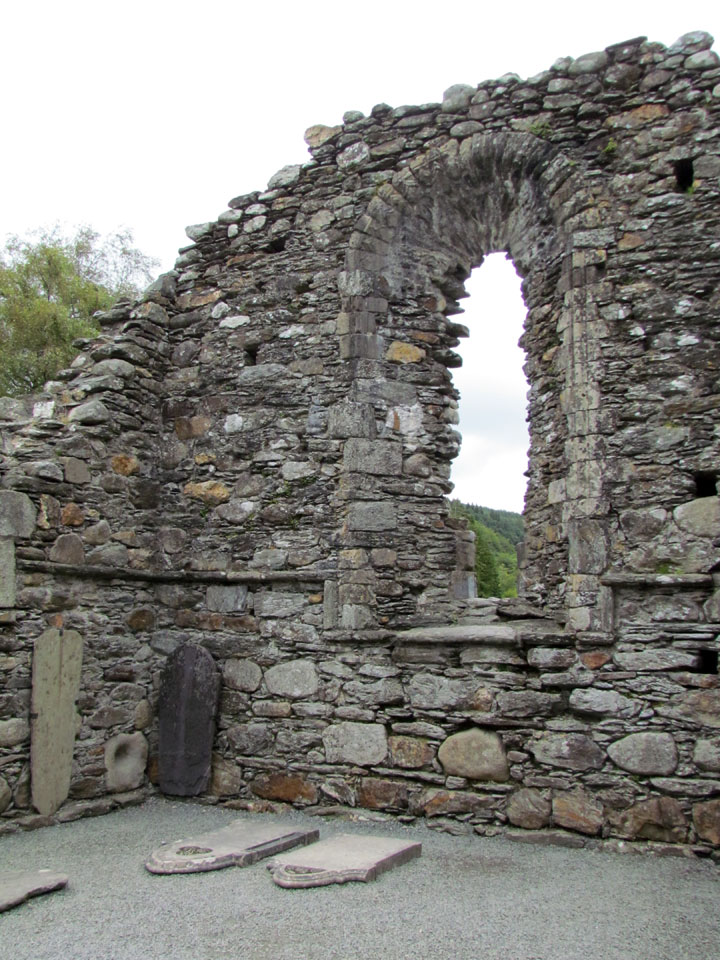 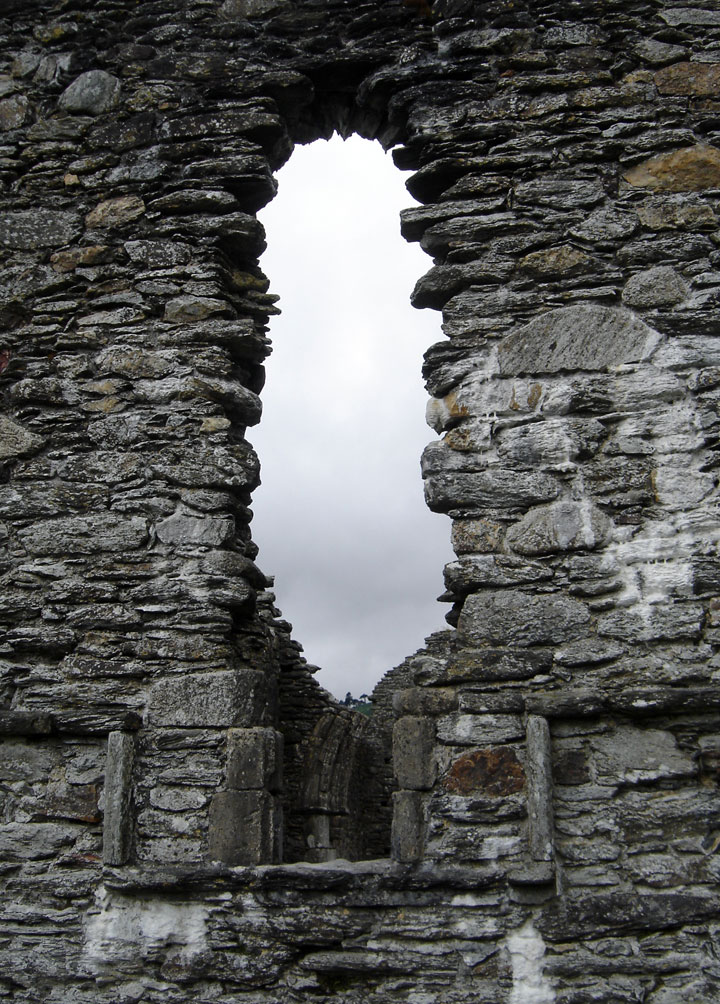 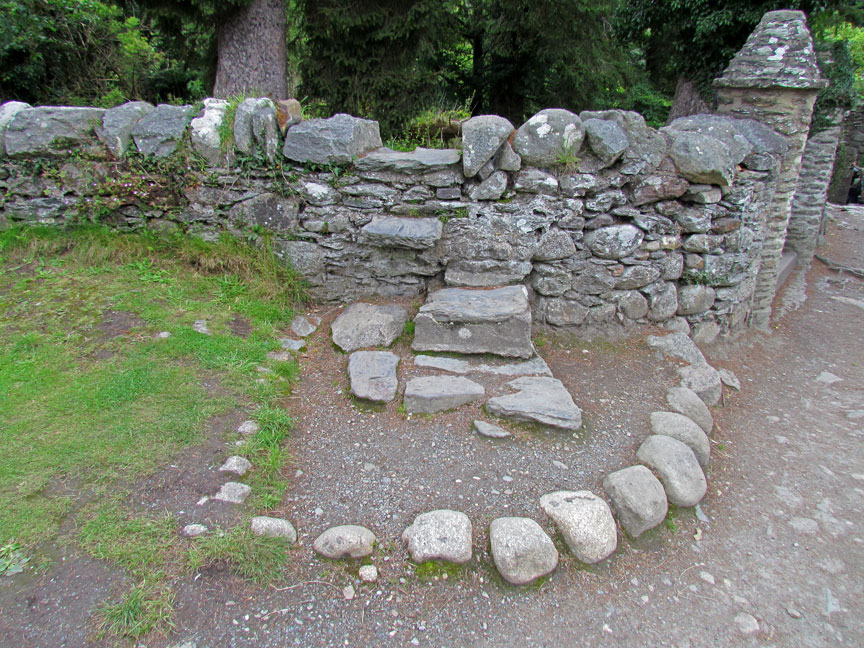 steps over the stone wall 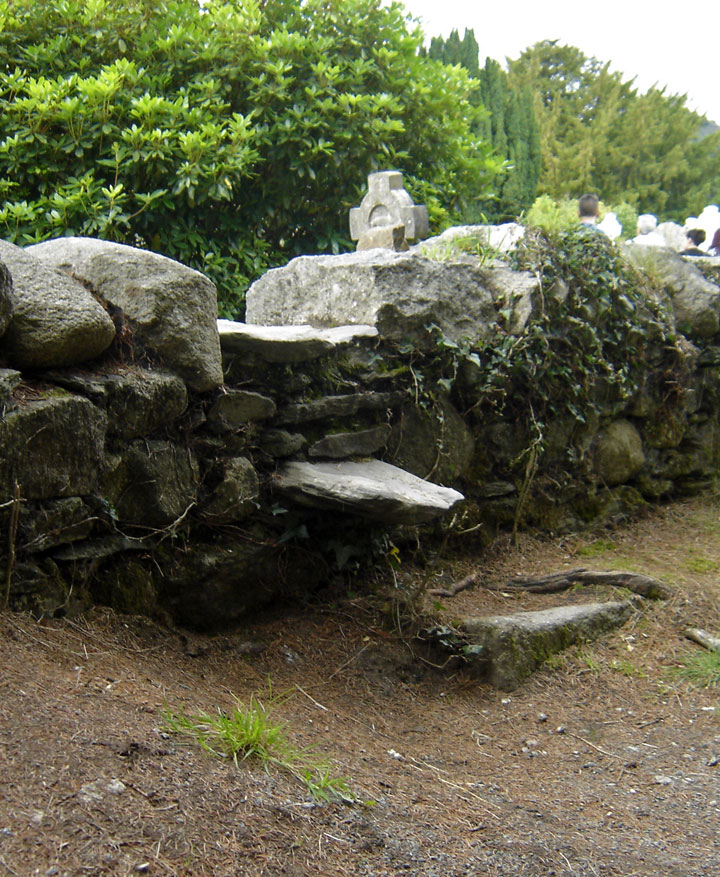 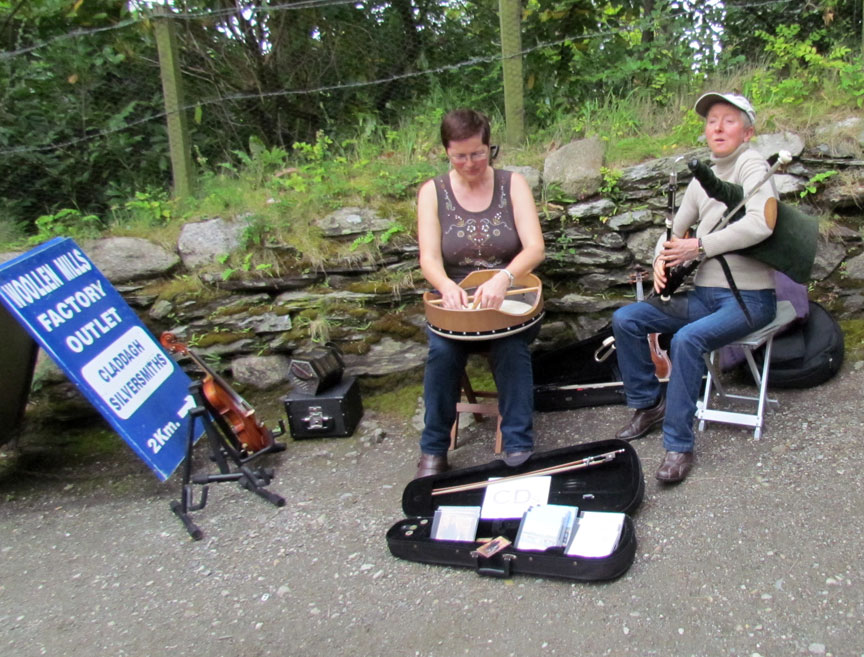 musicians at the entrance