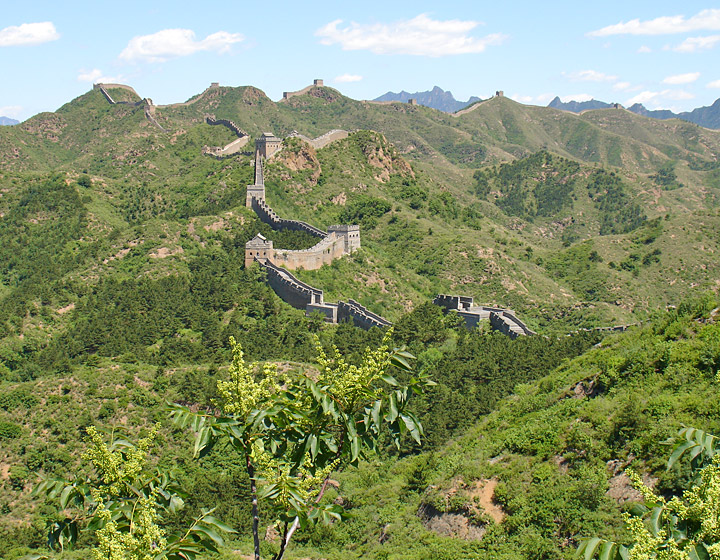 the Great Wall at Jinshanling 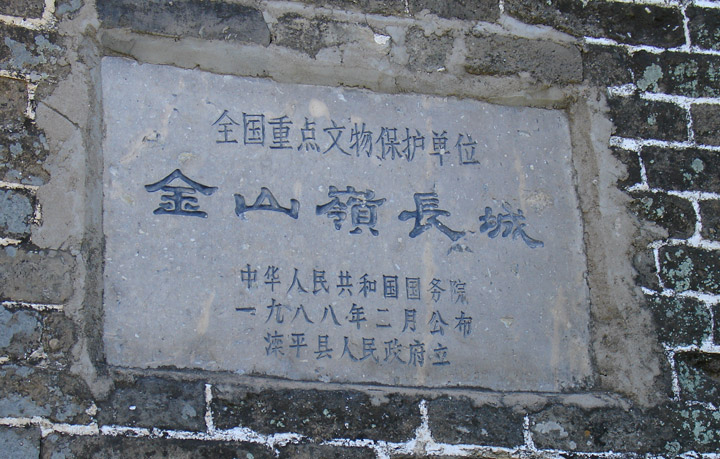 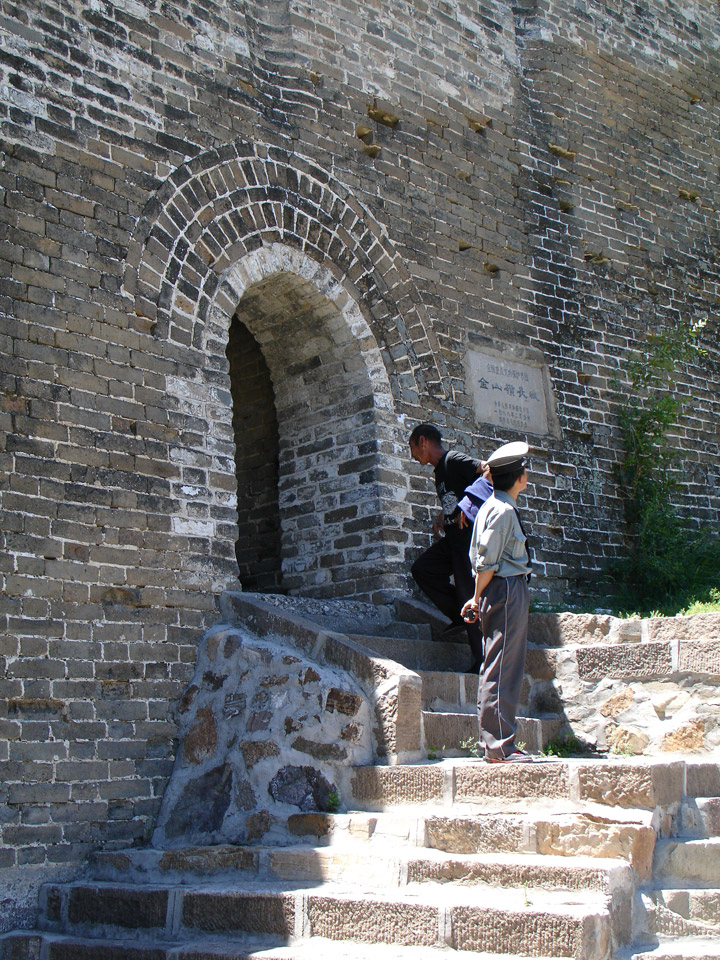 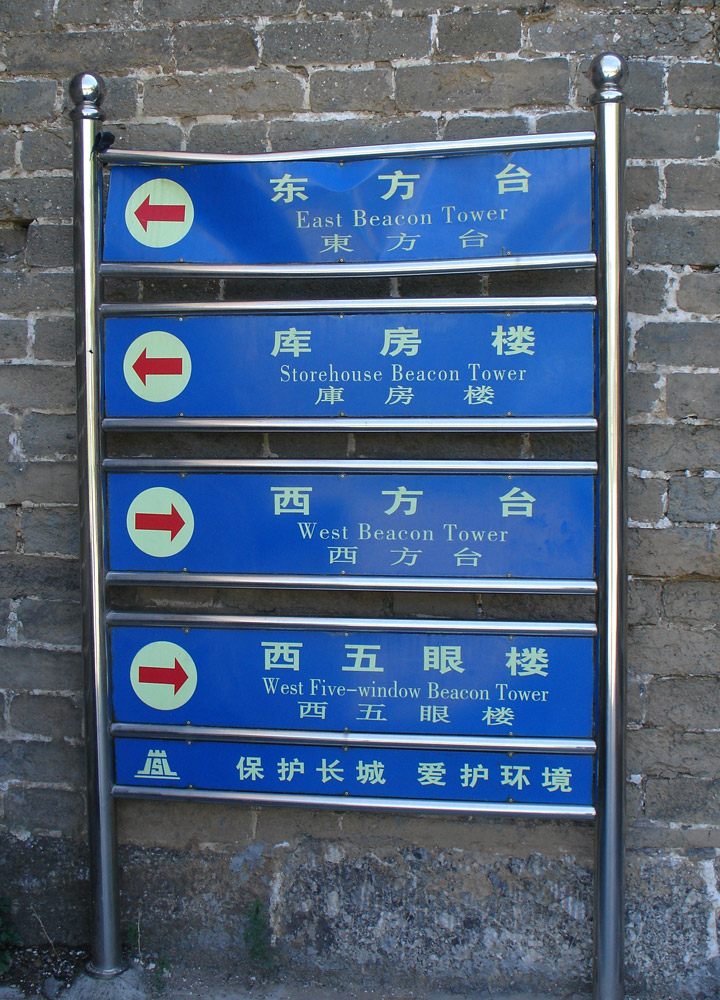 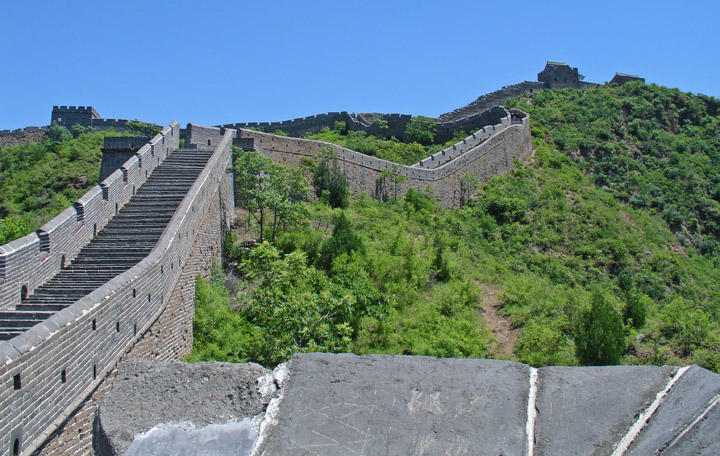 Its east end connects to the Simatai Great Wall. Jinshangling Great Wall got its name because it was built on the bigger and the smaller Jinshan Mountains. 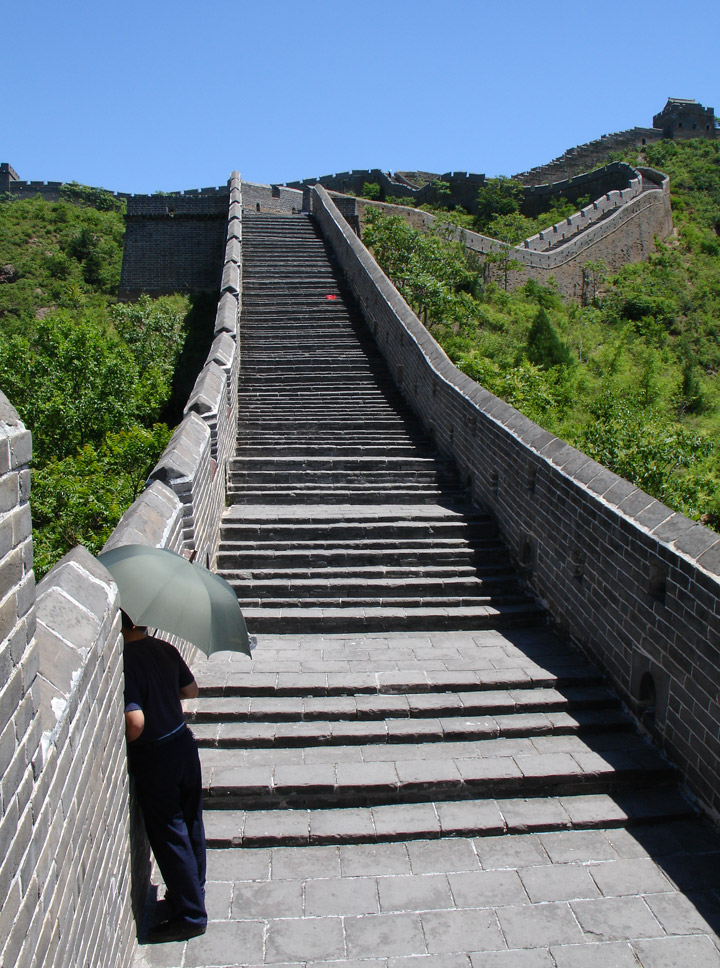 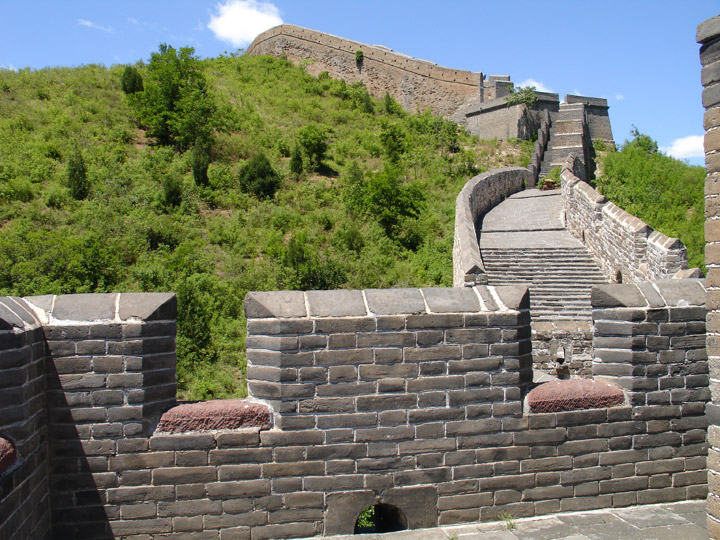 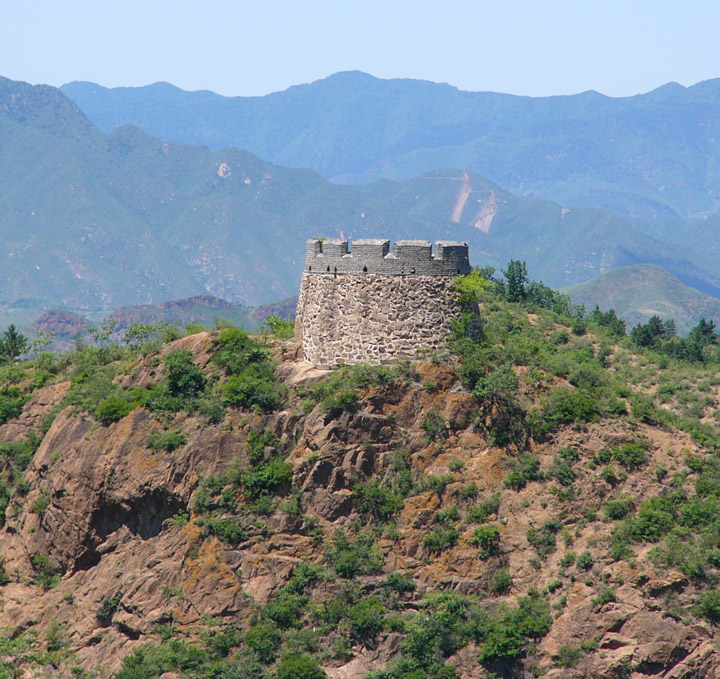 There are more than 100 enemy towers along the whole Jinshanling Great Wall. Built stably and elegantly, different towers have different structures and appearances.  Rows of 3-meter-high Barrier Walls were built leading to the enemy towers to protect the towers. Some of the towers are storerooms as well. They were used to store food, hay and weapons. 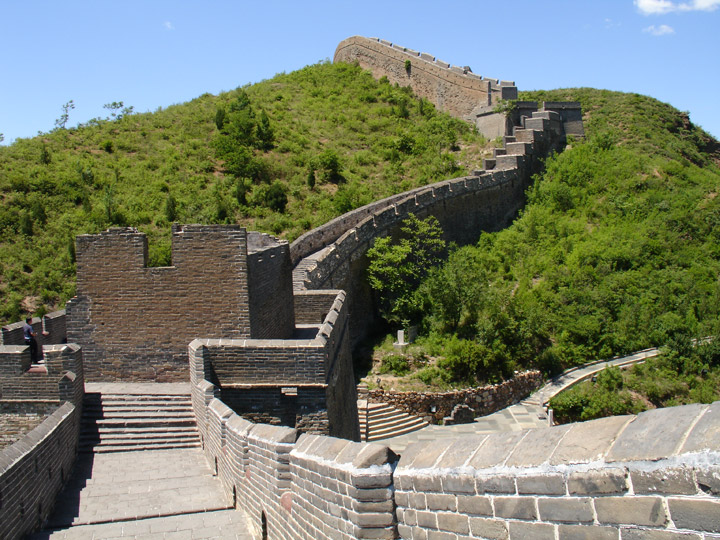 Two of so many enemy towers are bigger Jinshan and smaller Jinshan. There is a legend about them. It was said that the two towers were built by 3000 soldiers from the Jiangsu and Zhejiang Provinces led northward by Qi Jiguang. In order to remind themselves of their hometowns, the names of bigger and smaller Jinshan Islands in Zhenjiang City, which is in Jiangsu Province, were used to name the two enemy towers. 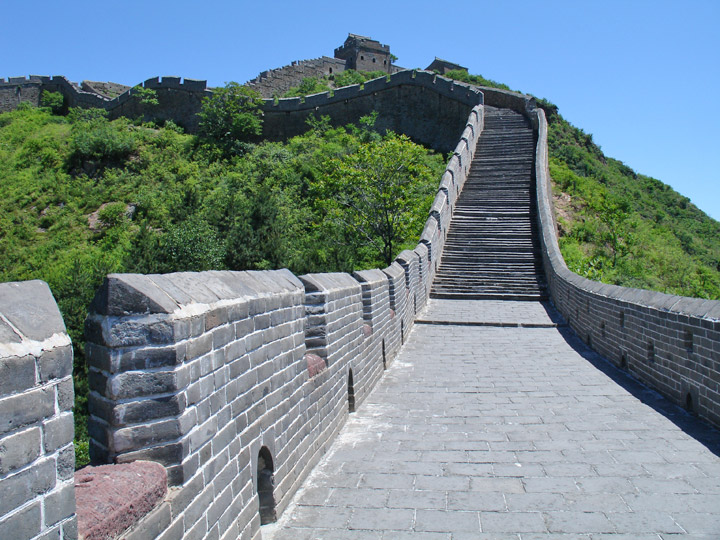 As there are relatively few tourists at Jinshanling Great Wall, it is a good place to explore on foot. 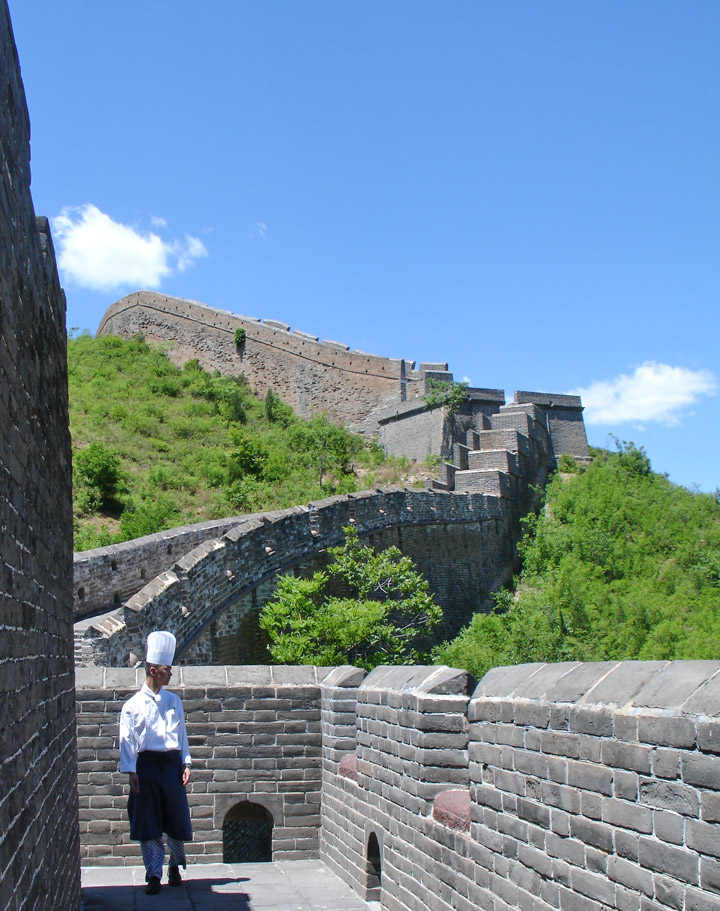 the Chef
means we will have lunch on the wall

In early mornings of spring and summer you can see a remarkable view - "Cloud Sea" below you from the Wall. 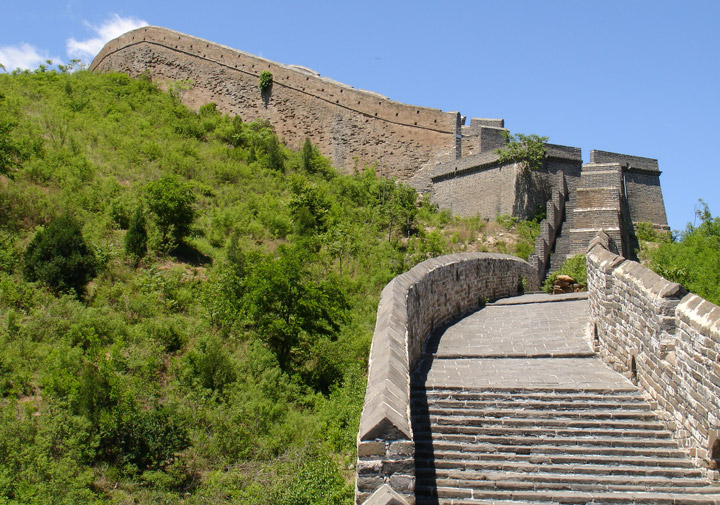 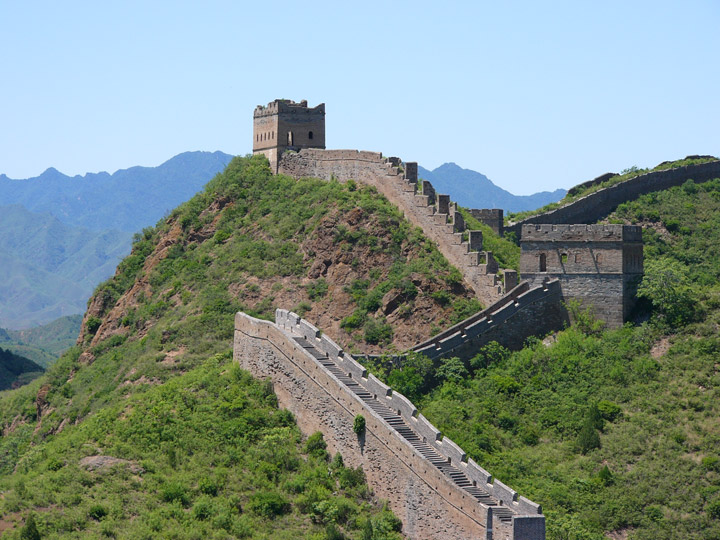 The Great Wall of China, one of the greatest wonders of the world, was enlisted in the World Heritage by UNESCO in 1987. Just like a gigantic dragon, the Great Wall winds up and down across deserts, grasslands, mountains and plateaus stretching approximately 6,700 kilometers (4,163 miles ) from east to west of China. With a history of more than 2000 years, some of the section of the great wall are now in ruins or even entirely disappeared. However, it is still one of the most appealing attractions all around the world owing to its architectural grandeur and historical significance. 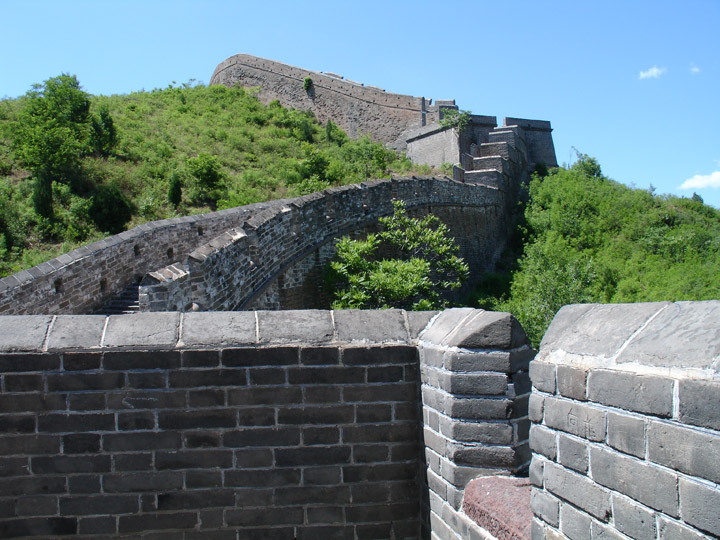 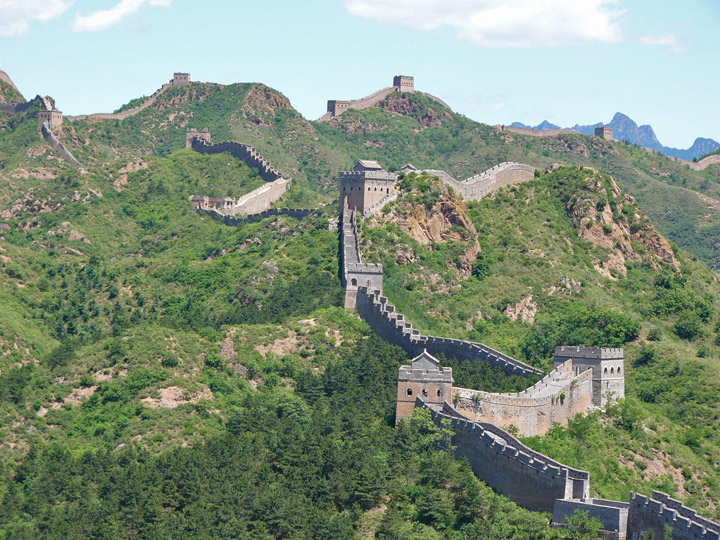 The Great Wall was originally built in the Spring, Autumn, and Warring States Periods as a defensive fortification by the three states: Yan, Zhao and Qin. The Great Wall went through constant extensions and repairs in later dynasties. In fact, it began as independent walls for different states when it was first built, and did not become the "Great" wall until the Qin Dynasty. Emperor Qin Shihuang succeeded in his effort to have the walls joined together to fend off the invasions from the Huns in the north after the unification of China. Since then, the Great Wall has served as a monument of the Chinese nation throughout history 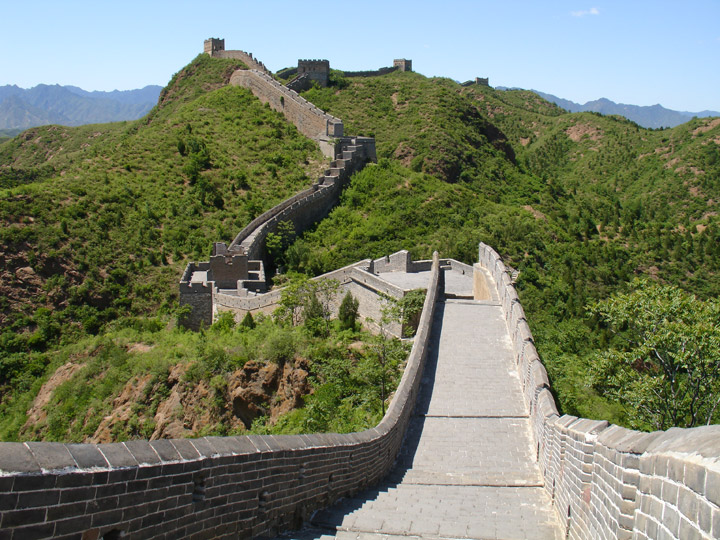 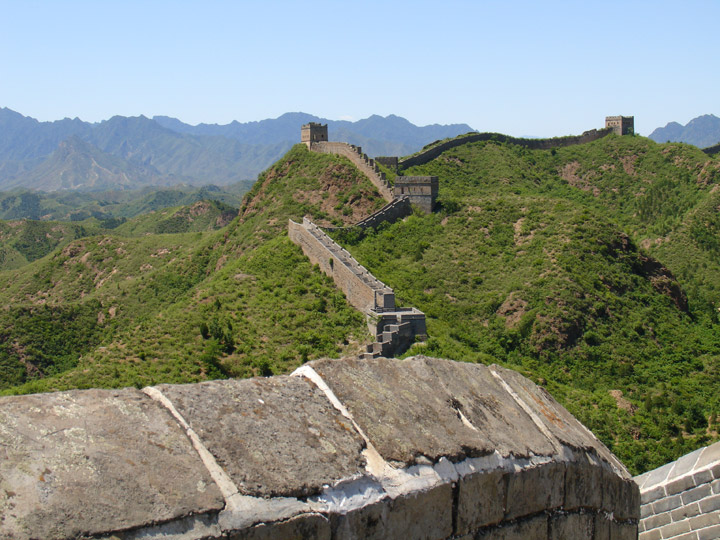 The construction of the Great Wall, drew heavily on the local resources for construction materials, was carried out in line with the local conditions under the management of contract and responsibility system. A great army of manpower, composed of soldiers, prisoners, and local people, built the wall. The construction result demonstrates the manifestation of the wisdom and tenacity of the Chinese people. 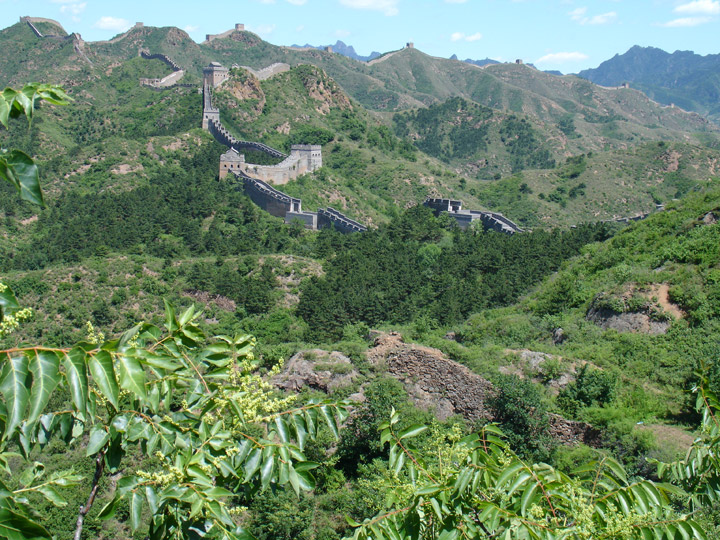 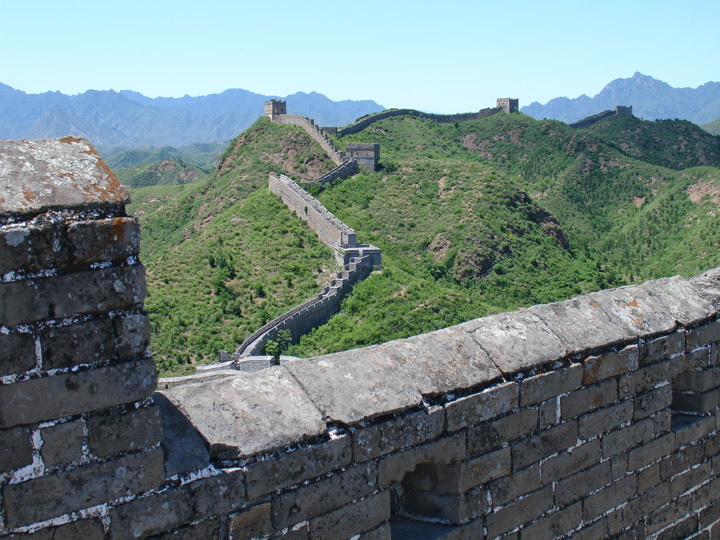 The Great Wall as we see today was mostly built during the Ming Dynasty. It starts from Shanhaiguan Pass in the east to Jiayuguan Pass in the west traversing provinces of Liaoning, Hebei, Beijing, Tianjin, Shanxi, Inner Mongolia, Ningxia, Shaanxi and Gansu. 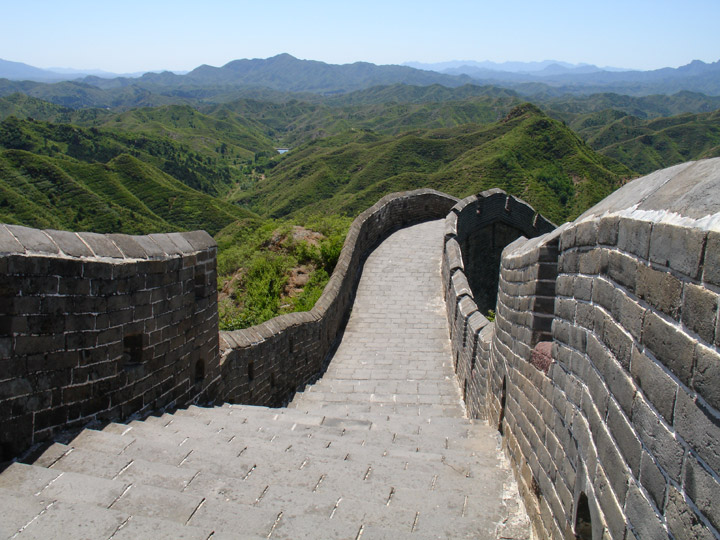 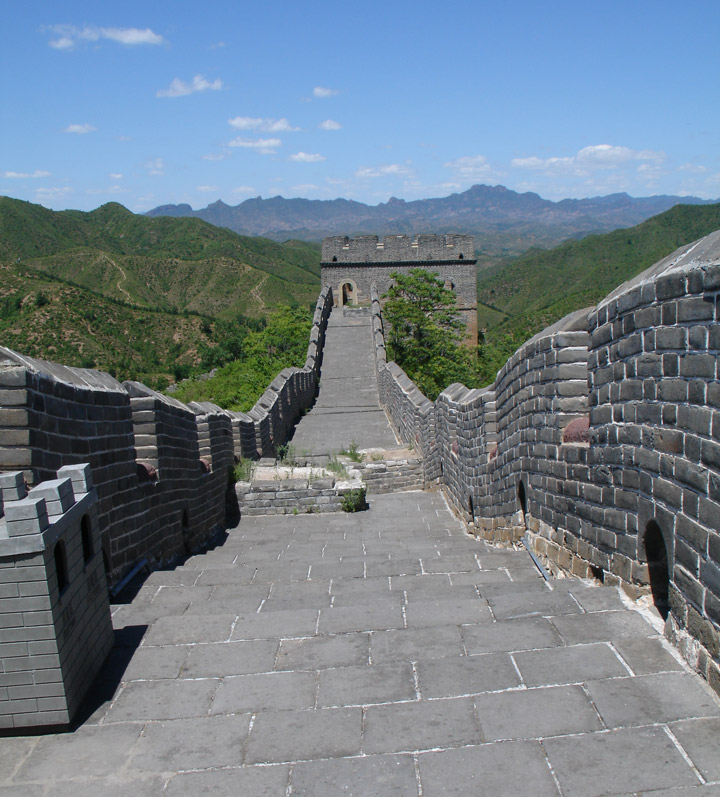 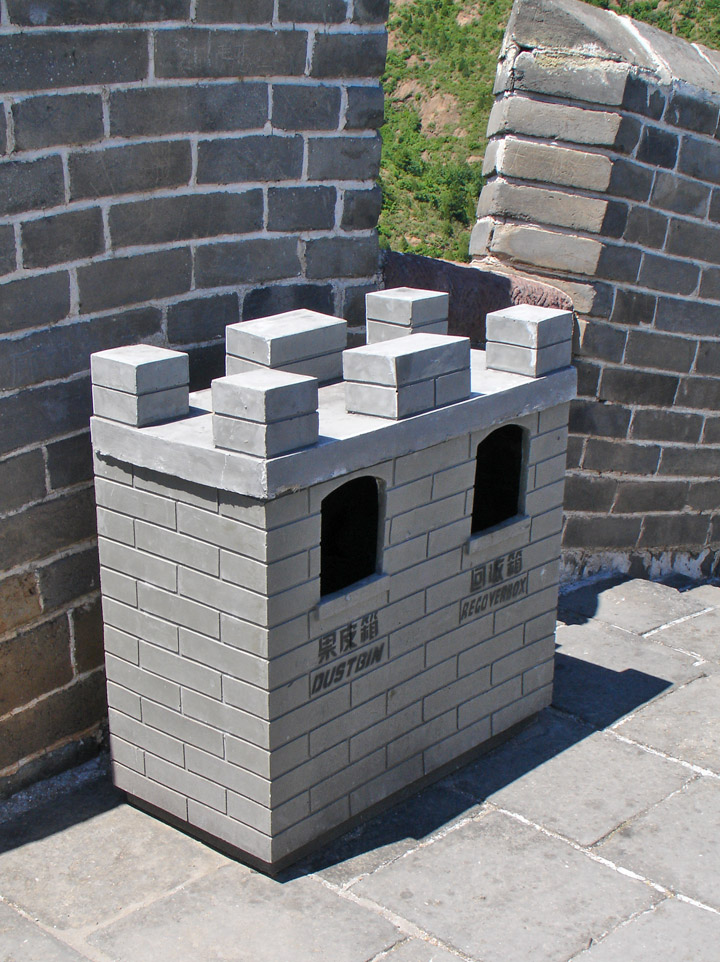 Following a forty-five day long survey of 101 sections of the Wall in different provinces, the China Great Wall Academy reported on December 12, 2002 that the forces of nature and destruction at the hand of mankind are bringing about the gradual reduction of its extent with the result that less than 30% remains in good condition. The Academy has called for greater protection of this important relic. 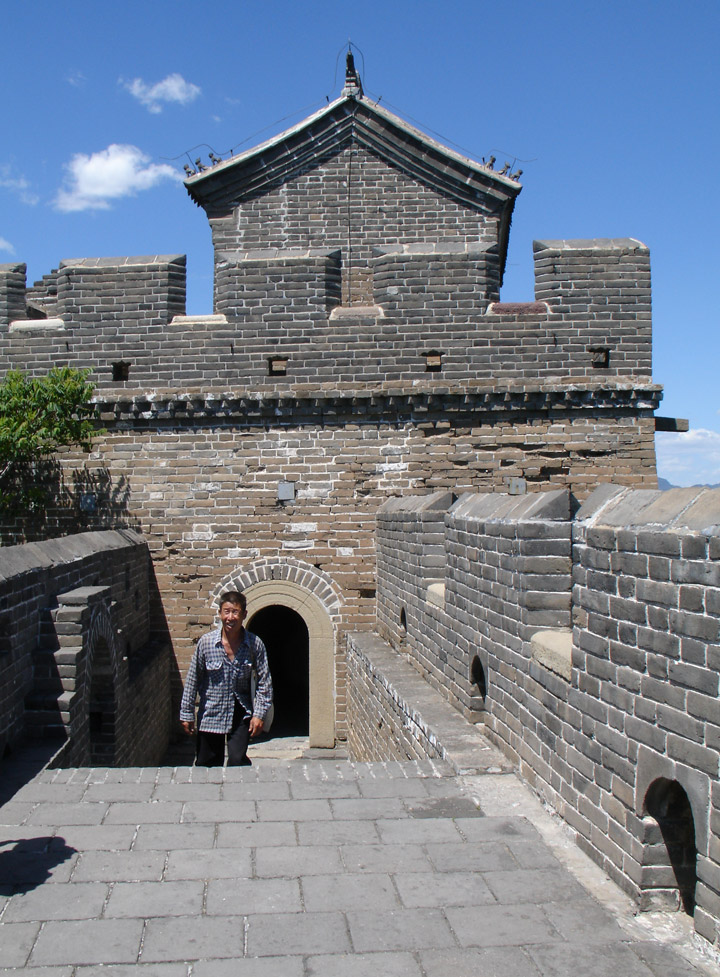 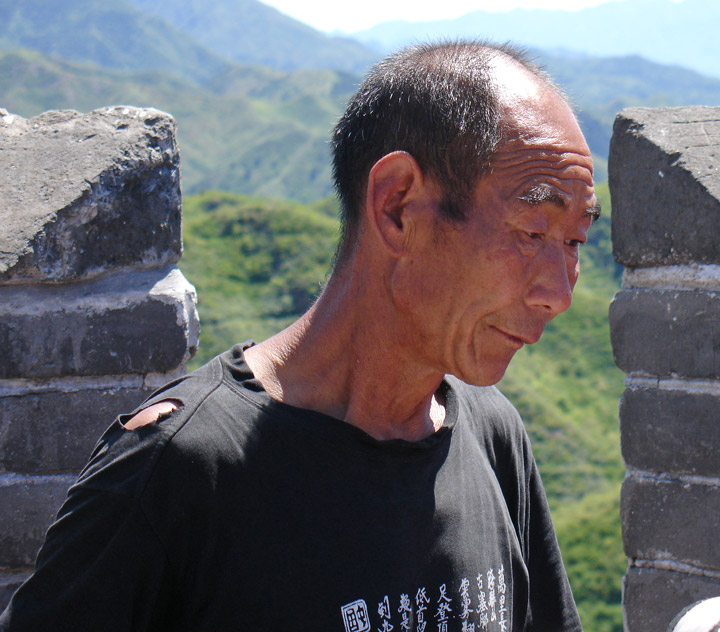 sells t-shirts
but needs a new one himself 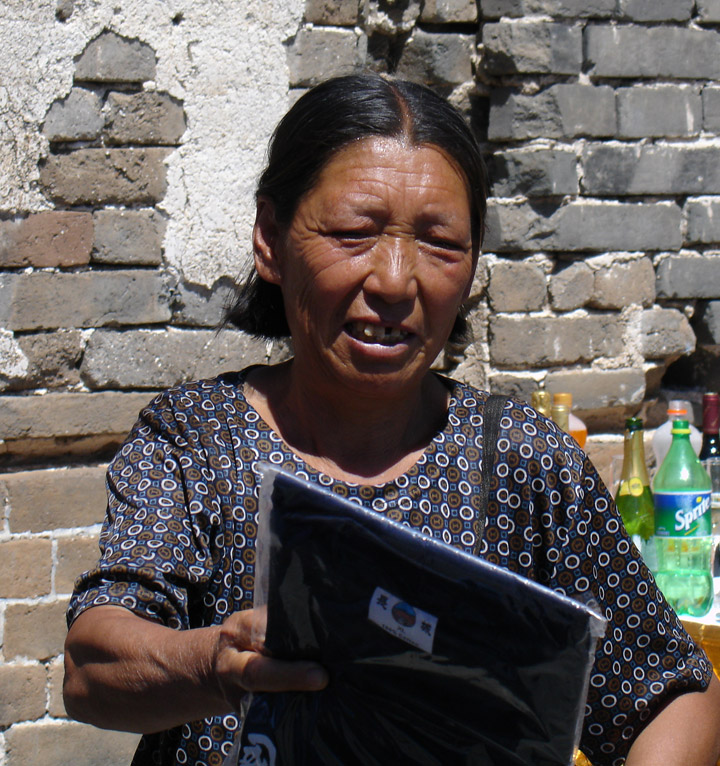 The Great Wall has long been incorporated into Chinese mythology and popular symbolism. The most beautiful of several legends is about the collapse of a section of the Great Wall caused by Meng Jiangnu, who cried bitterly over the death of her husband in the construction of the Great Wall. This legend has been spread widely through textbooks, folk songs and traditional operas. It is well-known in China. 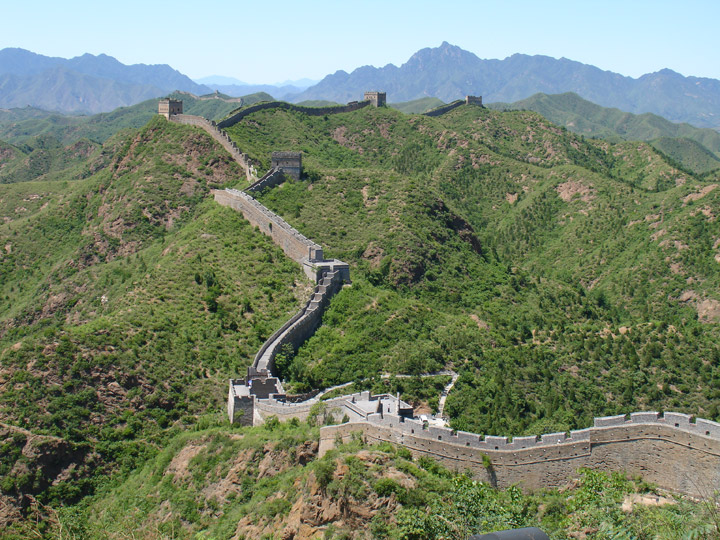 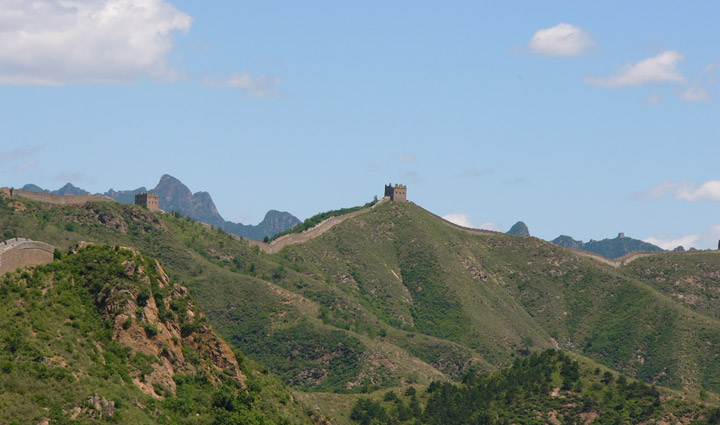 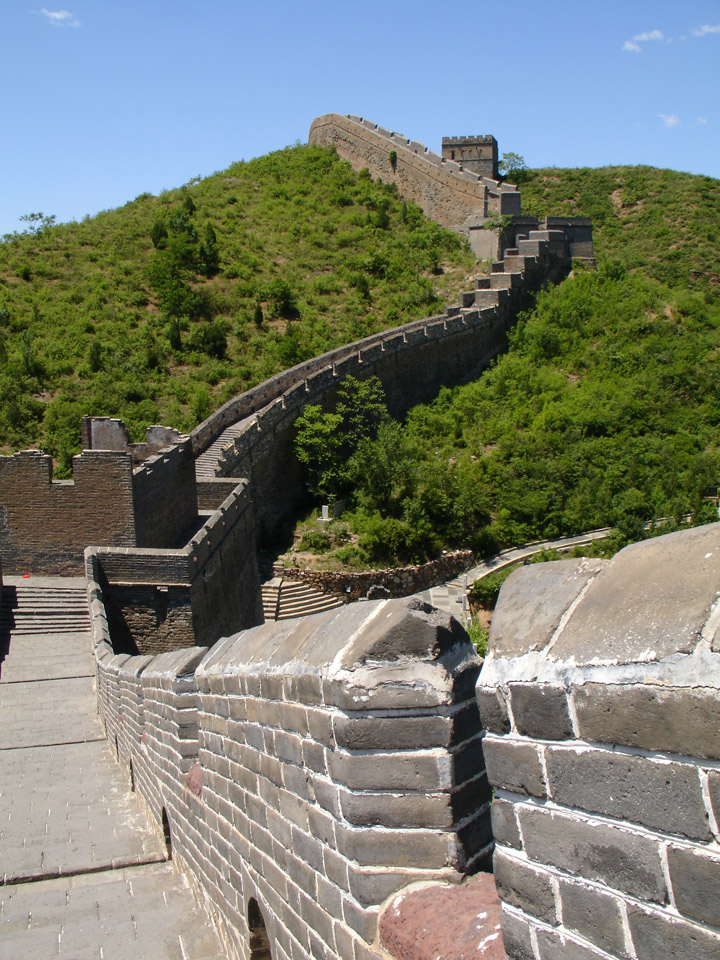 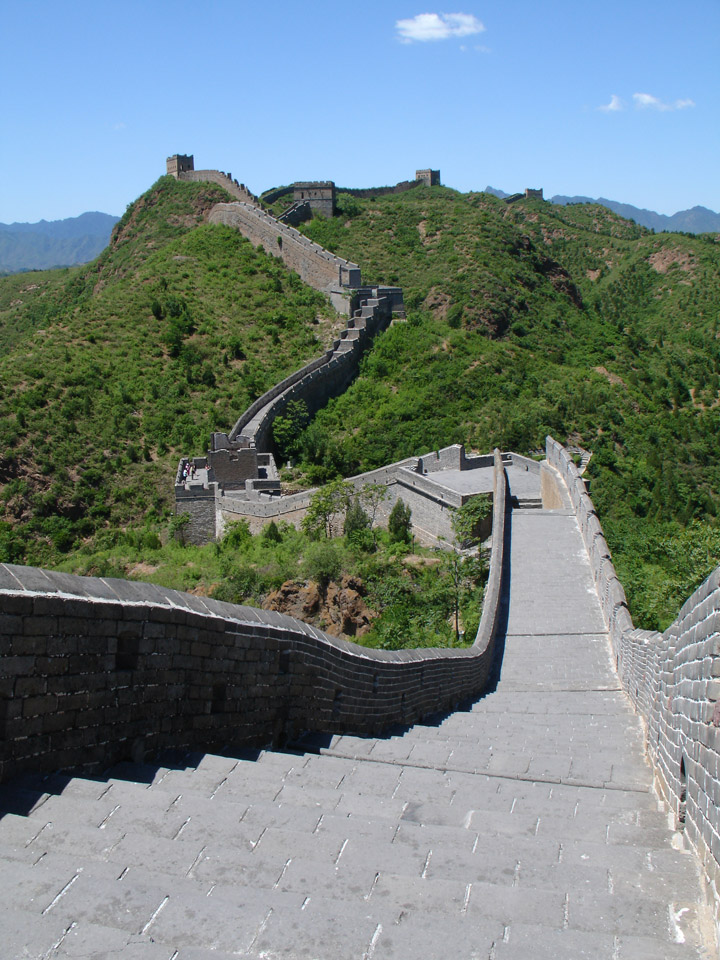