, city in northern Switzerland, capital of Zürich Canton, on the Lake of Zürich (Zürichsee) and the Limmat and Sihl rivers. The largest city in the country, Zürich is an important commercial and manufacturing center and is the financial capital of Switzerland. Major products include printed materials, electrical and electronic equipment, processed food, machinery, textiles, and clothing. The city is also one of Europe's principal financial and gold-trading hubs and attracts many tourists.

Although it is a modern metropolis, Zürich has retained much of its historic charm. Points of interest include the Romanesque Grossmünster (chiefly 11th-13th century), a Protestant church where the Reformation leader Huldreich Zwingli preached in the early 16th century; the Fraumünster (begun in the 12th century); Saint Peter's Church (13th century); the Town Hall (17th century); the Rietberg Museum, which features displays of Asian, African, and American art; and the Swiss National Museum, with collections showing the development of culture in Switzerland from prehistoric times to the 20th century.

Zürich also has a botanical garden, a natural history museum, and an industrial arts museum. The city is the site of the University of Zürich (1833), the Swiss Federal Institute of Technology at Zürich (1855), and a conservatory of music (1876). In the suburb of Küsnacht is the C. G. Jung Institute of Zürich (1948). Zürich is the birthplace of the poet and novelist Gottfried Keller and the educational reformer Johann Heinrich Pestalozzi. The Irish novelist James Joyce is buried here.

Remains of prehistoric lake dwellings have been discovered at the site of present-day Zürich. The Helvetii were among the Celtic tribes that settled the area. The Romans captured the community around 58BC and named it Turicum, and the settlement subsequently came under the successive control of the Alamanni, the Franks, and the Swabians.

Zürich had become an ecclesiastical center by the 9th century, and in 1218 it was designated a free imperial city of the Holy Roman Empire. In 1351 it joined the Swiss Confederation.

The Swiss Reformation was initiated here in 1519 under the leadership of Zwingli. During the 18th and 19th centuries the community developed as a manufacturing and cultural center. Population (1991 estimate) 342,391. 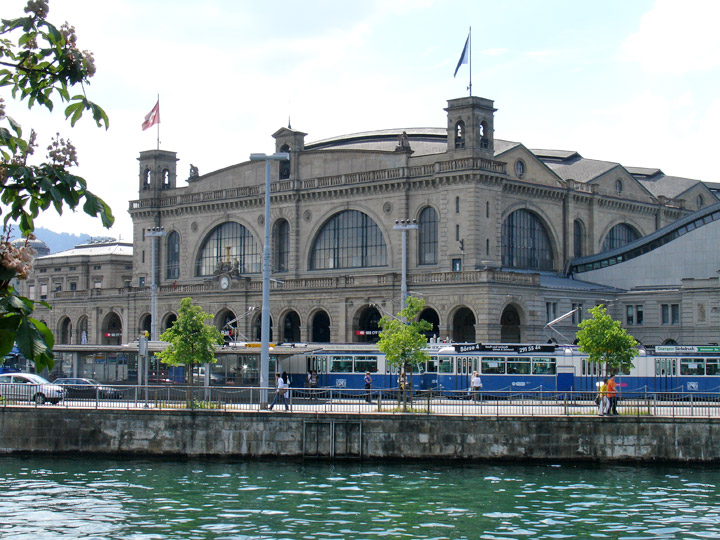