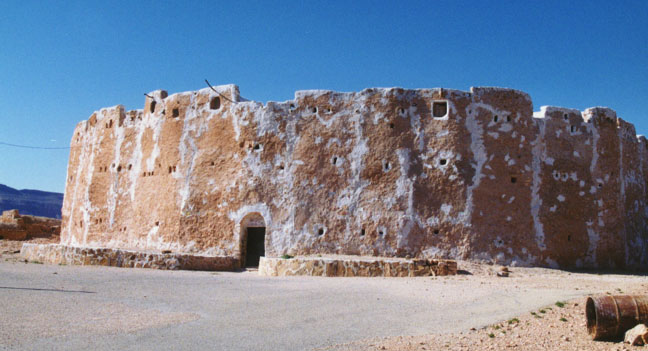 These people call themselves Amazigh. "Berber" is a name that has been given them by others and which they themselves do not use. Amazigh history in North Africa is extensive and diverse. Their ancient ancestors settled in the area just inland of the Mediterranean Sea to the east of Egypt. 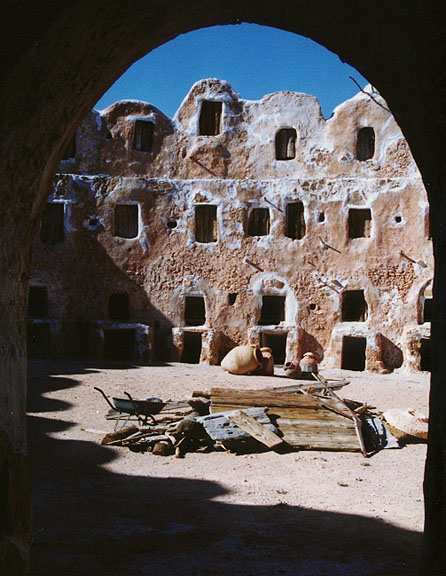 thru the tunnel, looking at the individual lockers

Many early Roman, Greek, and Phoenician colonial accounts mention a group of people collectively known as Berbers living in northern Africa. In actuality, Berber is a generic name given to numerous heterogeneous ethnic groups that share similar cultural, political, and economic practices. Over the last several hundred years many Berber peoples have converted to Islam. 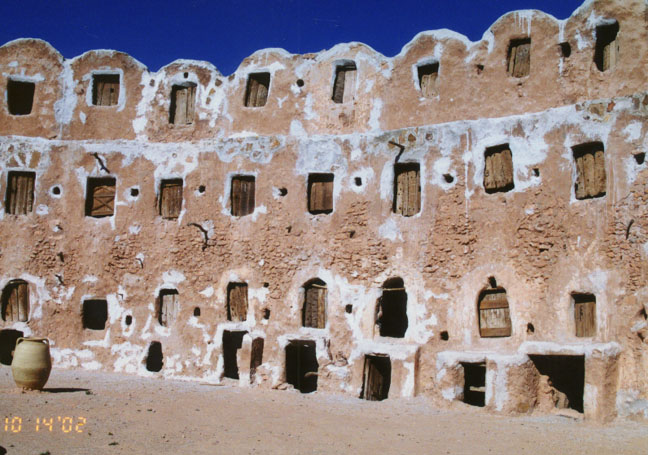 many still having doors

Contrary to popular romanticism which portrays Amazigh as nomadic peoples crossing the desert on camels, most actually practice sedentary agriculture in the mountains and valleys throughout northern Africa. Some do, in fact, engage in trade throughout the region, and such practices certainly had a tremendous influence on the history of the African continent. 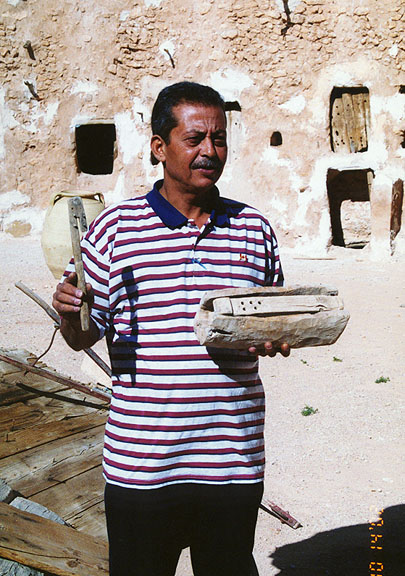 Trade routes established from western Africa to the Mediterranean connected the peoples of southern Europe with much of sub-Saharan Africa thousands of years ago. There are basically five trade routes which extend across the Sahara from the northern Mediterranean coast of Africa to the great cities, which are situated on the southern edge of the Sahara. Berber merchants were responsible for bringing goods from these cities to the north. From there they were distributed throughout the world. 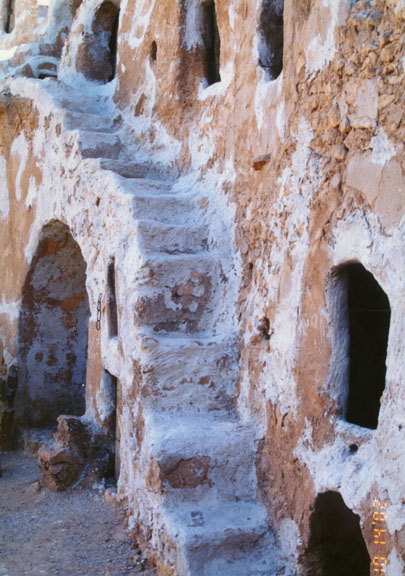 stairs to the upper tiers

Amazigh society was divided between those who tended the land and those who did not. At one time, tilling the land was considered the work of the lower classes, while the upper classes were merchants. Usually, groups of sedentary Berber paid allegiance to a locally appointed headman, who in turn reported to the noble who considered the village his domain. 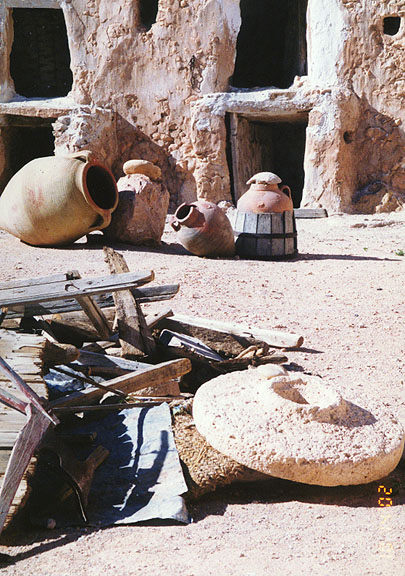 the jugs were used to store grain or olive oil

As time has passed, however, these sedentary farmers have been able to accumulate wealth while the trans-Saharan trade routes diminished in importance. They were also given political status by colonial and postcolonial administrations. 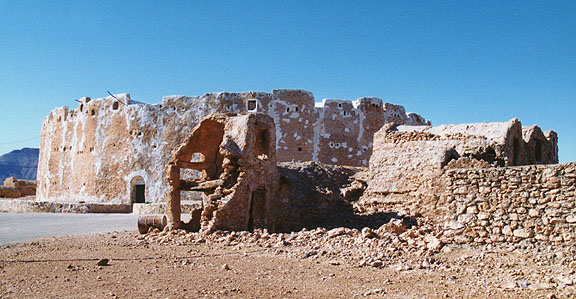 merchants also had shops near the storage building

Most Berbers are at least nominal followers of Islam, and many strictly observe Islamic traditions. Most of the feasts are observed and celebrated, but the fasting that is required during Ramadan is often excused for those who travel. 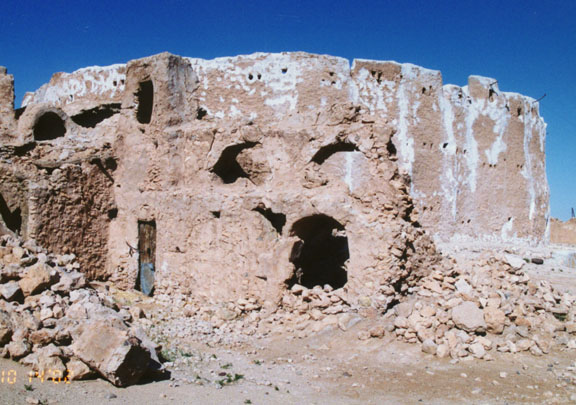 former shops of the merchants 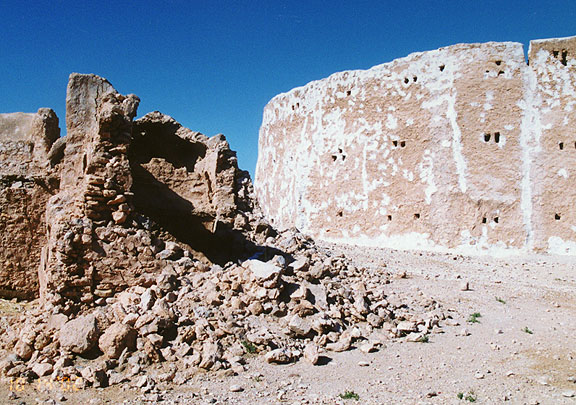 Like most followers of Islam in northern Africa, many Berbers believe in the continuous presence of various spirits (djinns). Divination is accomplished through means of the Koran. Most men wear protective amulets which contain verses from the Koran.

Text from University of Iowa

Another Berber storage location in a fortified town 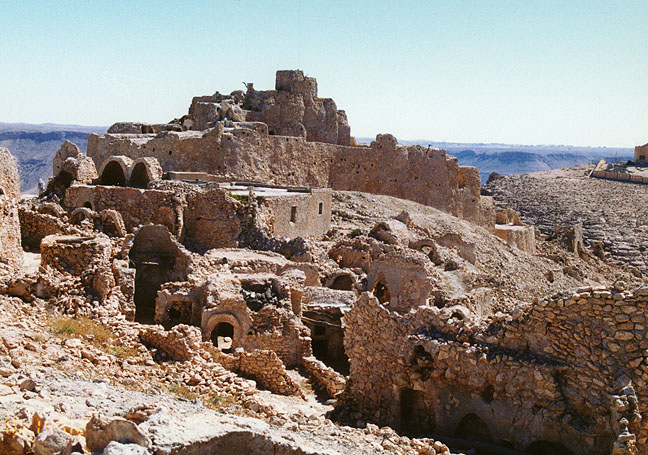 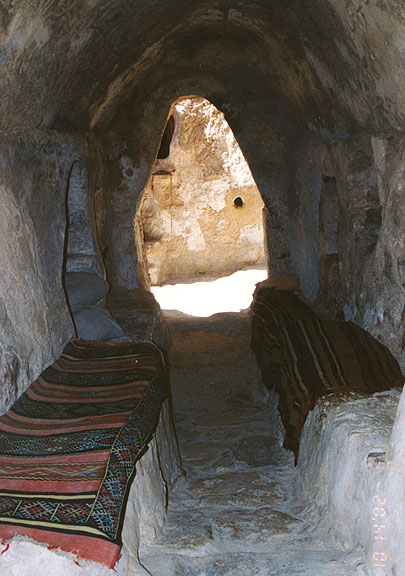 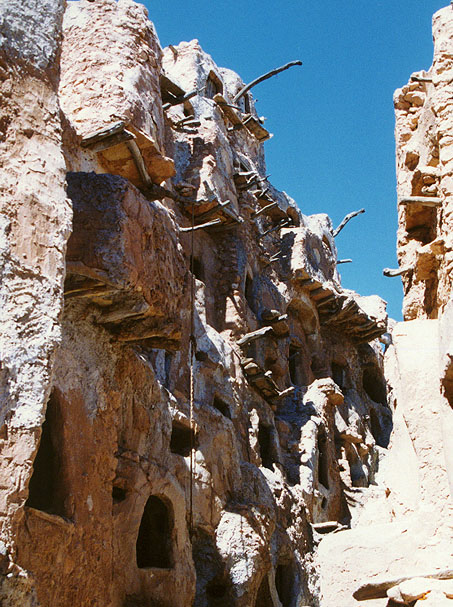 storage areas
(more then 400 at this storage site) 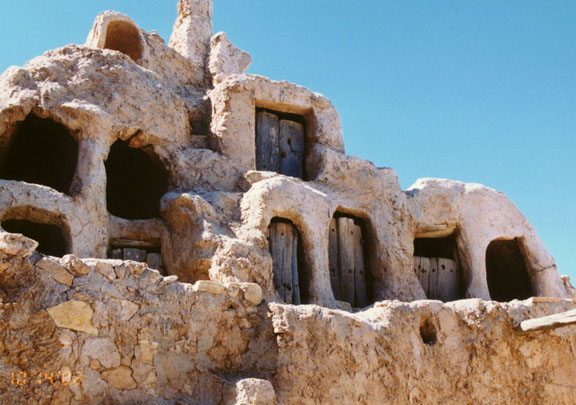 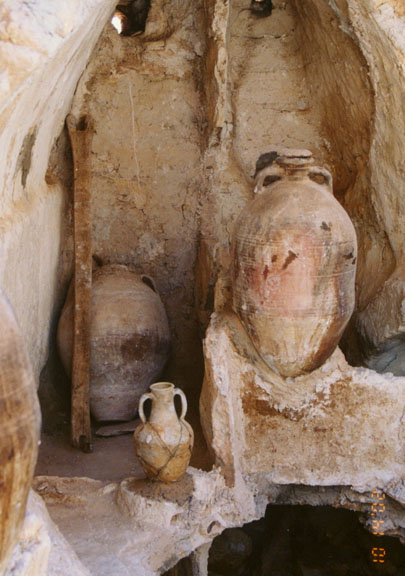 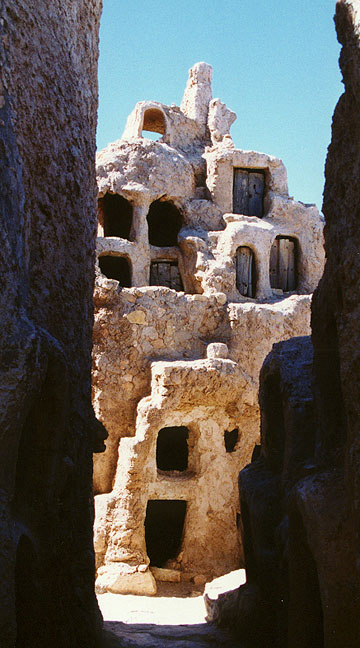 all within narrow passage ways 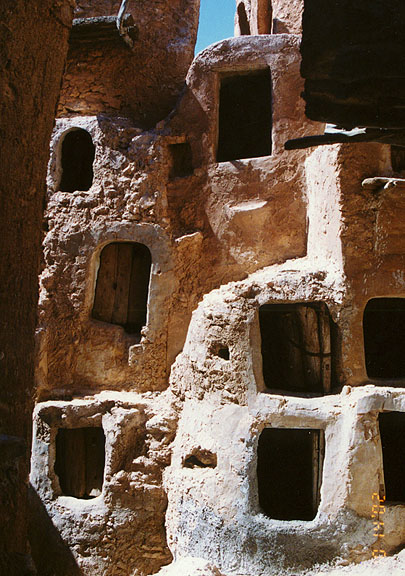 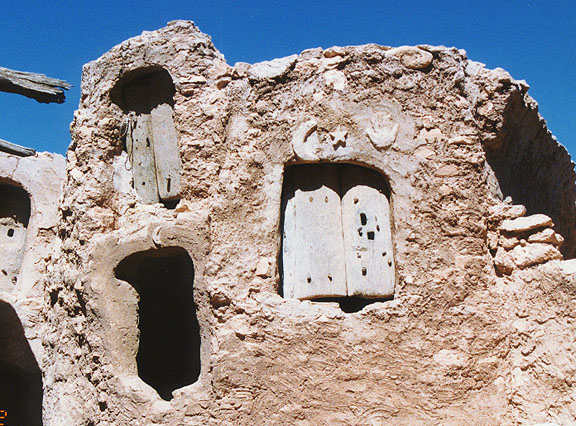 marked with the star and crescent