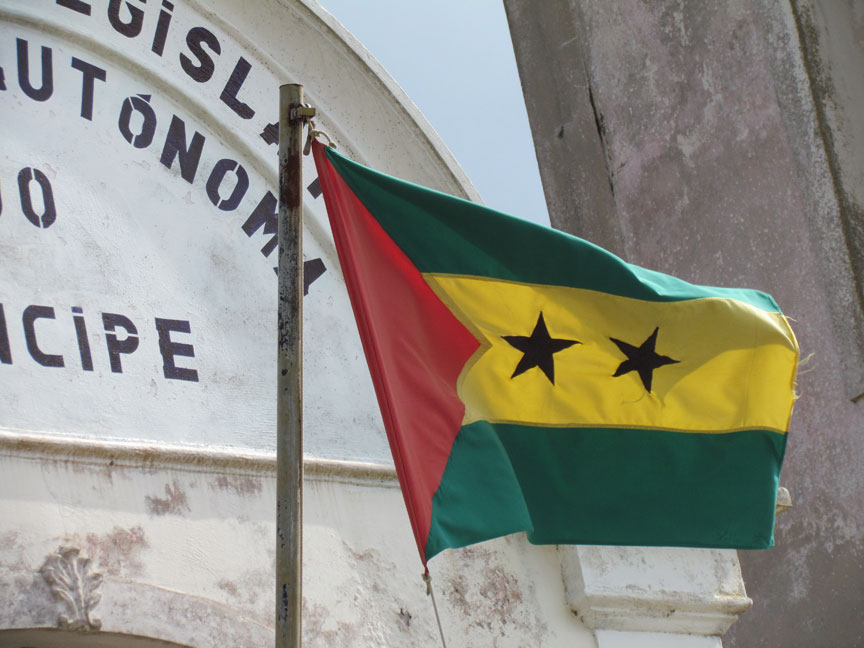 São Tomé and Príncipe, officially the Democratic Republic of São Tomé and Príncipe, is a Portuguese-speaking island nation in the Gulf of Guinea, off the western equatorial coast of Central Africa. It consists of two islands: São Tomé and Príncipe, located about 140 kilometres (87 mi) apart and about 250 and 225 kilometres (155 and 140 mi), respectively, off the northwestern coast of Gabon. Both islands are part of an extinct volcanic mountain range. São Tomé, the sizable southern island, is situated just north of the equator. It was named in honour of Saint Thomas by Portuguese explorers who happened to arrive at the island on his feast day. 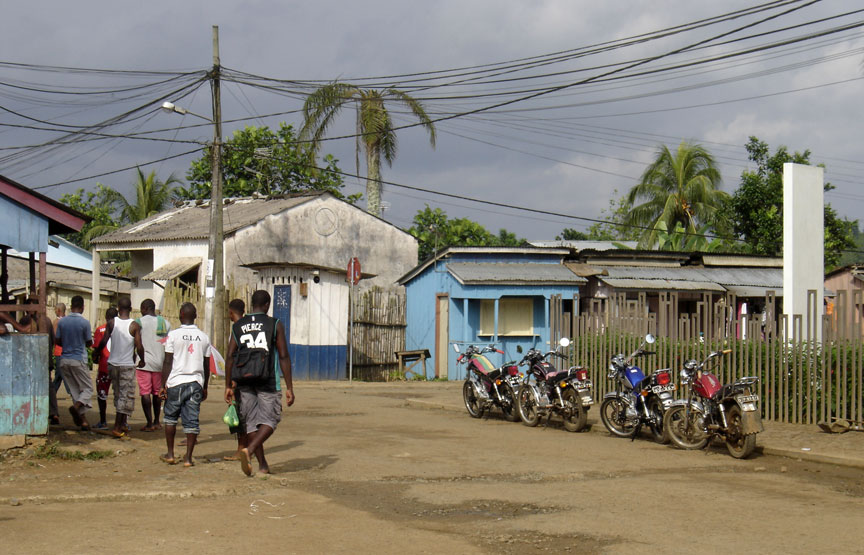 São Tomé and Príncipe is the second-smallest African country in terms of population (the Seychelles being the smallest). It is the smallest country in the world that is not a former British overseas territory, a former United States trusteeship, or one of the European microstates. It is also the smallest Portuguese-speaking country. 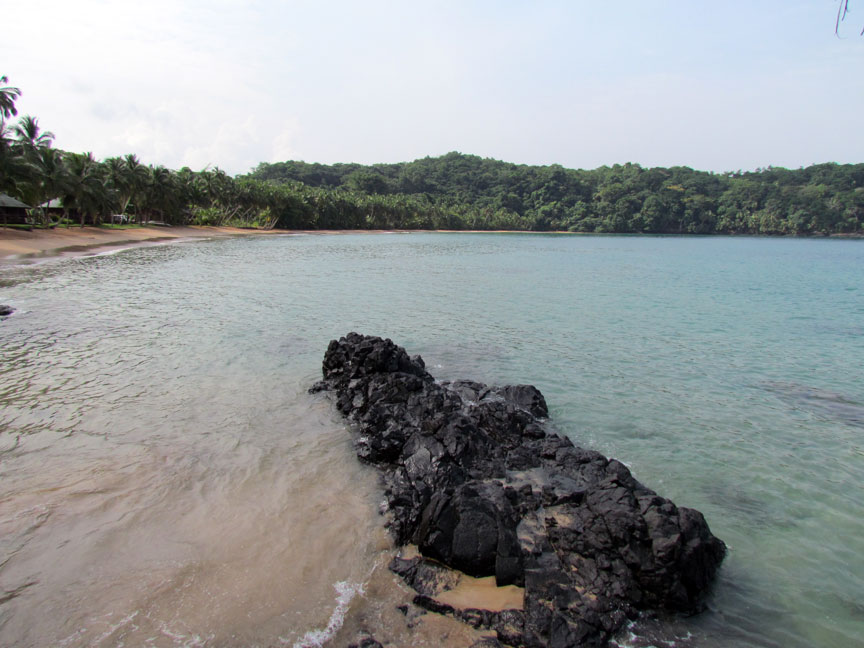 The islands of São Tomé and Príncipe were uninhabited before the arrival of the Portuguese sometime around 1470. The islands were discovered by João de Santarém and Pedro Escobar and bore his name until the 20th century. Portuguese navigators explored the islands and decided that they would be good locations for bases to trade with the mainland. 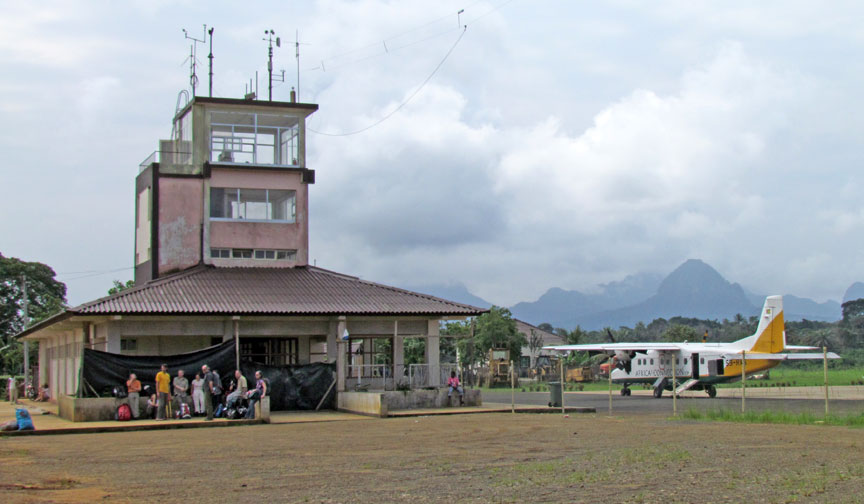 The dates of discovery are sometimes given as December 21 (St Thomas's Day), 1471 for São Tomé, and January 17 (St Anthony's Day), 1472 for Príncipe, though other sources give different nearby years. Príncipe was initially named Santo Antão ("Saint Anthony"), changing its name in 1502 to Ilha do Príncipe ("Prince's Island"), in reference to the Prince of Portugal to whom duties on the island's sugar crop were paid. 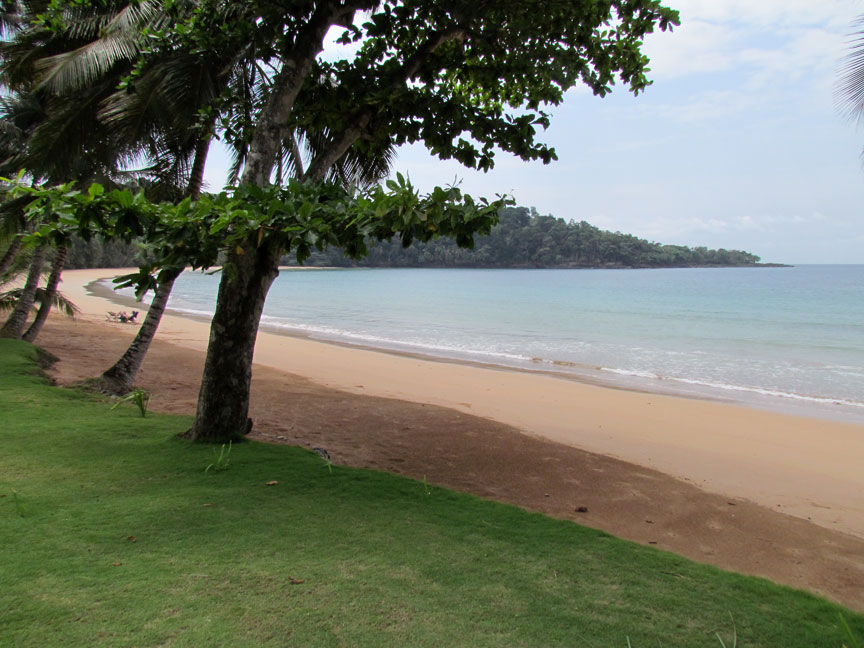 The first successful settlement of São Tomé was established in 1493 by Álvaro Caminha, who received the land as a grant from the crown. Príncipe was settled in 1500 under a similar arrangement. Attracting settlers proved difficult, however, and most of the earliest inhabitants were "undesirables" sent from Portugal, mostly Jews. In time these settlers found the volcanic soil of the region suitable for agriculture, especially the growing of sugar. 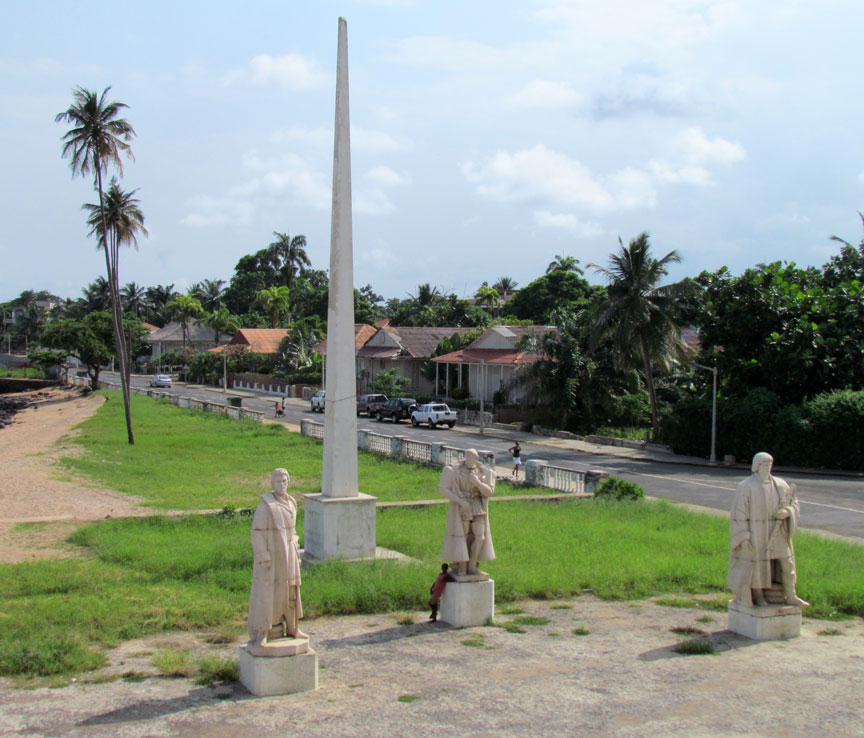 The cultivation of sugar was a labour-intensive process and the Portuguese began to import large numbers of slaves from the mainland. By the mid-16th century the Portuguese settlers had turned the islands into Africa's foremost exporter of sugar. São Tomé and Príncipe were taken over and administered by the Portuguese crown in 1522 and 1573, respectively.

More Photos of the National Museum

However, superior sugar colonies in the Western Hemisphere began to hurt the islands. The large slave population also proved difficult to control, with Portugal unable to invest many resources in the effort. Sugar cultivation thus declined over the next 100 years, and by the mid-17th century, the economy of São Tomé had changed. It was now primarily a transit point for ships engaged in the slave trade between the West and continental Africa. 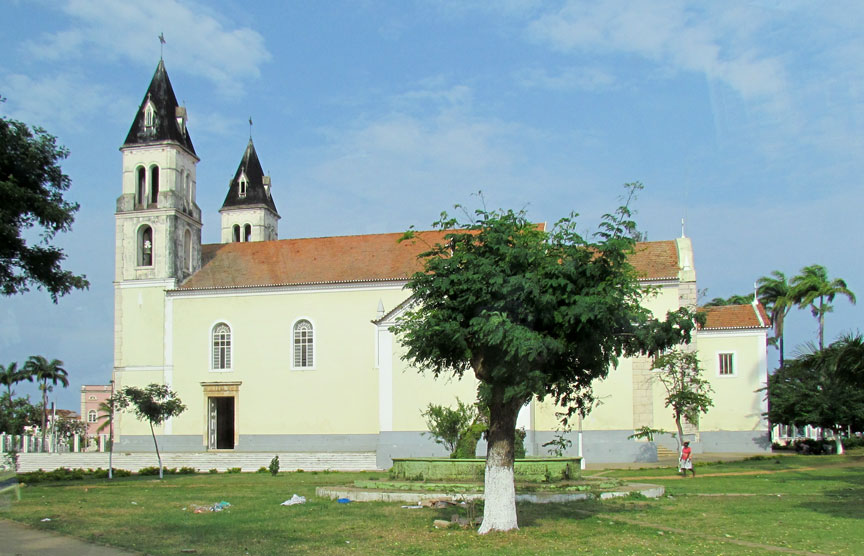 In the early 19th century, two new cash crops, coffee and cocoa, were introduced. The rich volcanic soils proved well suited to the new cash crop industry, and soon extensive plantations (roças), owned by Portuguese companies or absentee landlords, occupied almost all of the good farmland. By 1908, São Tomé had become the world's largest producer of cocoa, which remains the country's most important crop. 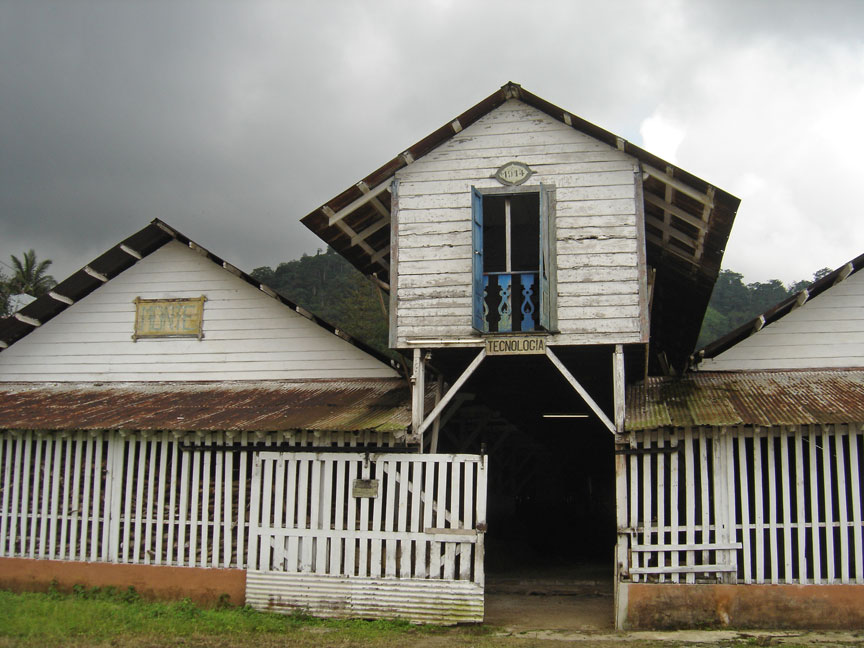 The roças system, which gave the plantation managers a high degree of authority, led to abuses against the African farm workers. Although Portugal officially abolished slavery in 1876, the practice of forced paid labor continued. Scientific American Magazine documented in words and pictures the continued use of slaves in São Tomé in their March 13, 1897 issue. In the early 20th century, an internationally publicized controversy arose over charges that Angolan contract workers were being subjected to forced labor and unsatisfactory working conditions. Sporadic labor unrest and dissatisfaction continued well into the 20th century, culminating in an outbreak of riots in 1953 in which several hundred African laborers were killed in a clash with their Portuguese rulers. This "Batepá Massacre" remains a major event in the colonial history of the islands, and its anniversary is officially observed by the government. 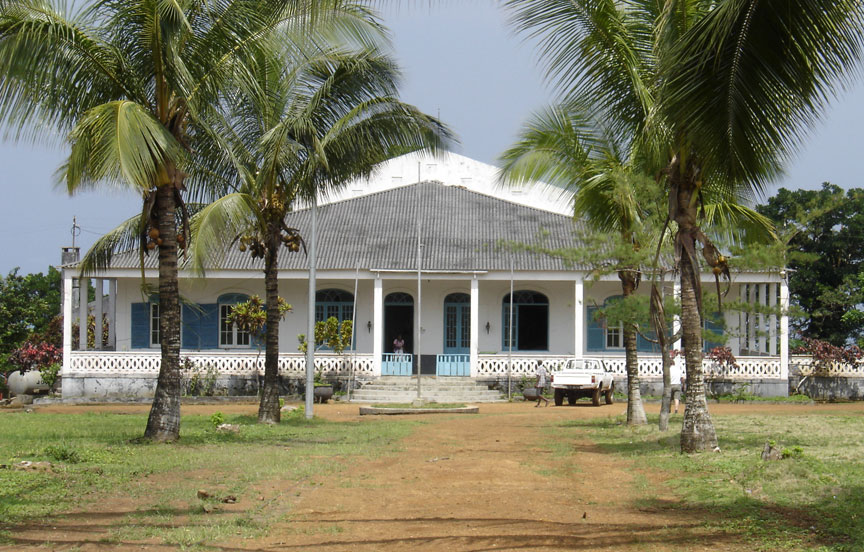 a grand roça home to the Portuguese Royal family

By the late 1950s, when other emerging nations across the African Continent were demanding independence, a small group of São Toméans had formed the Movement for the Liberation of São Tomé and Príncipe (MLSTP), which eventually established its base in nearby Gabon. Picking up momentum in the 1960s, events moved quickly after the overthrow of the Caetano dictatorship in Portugal in April 1974. The new Portuguese regime was committed to the dissolution of its overseas colonies; in November 1974, their representatives met with the MLSTP in Algiers and worked out an agreement for the transfer of sovereignty. After a period of transitional government, São Tomé and Príncipe achieved independence on July 12, 1975, choosing as the first president the MLSTP Secretary General Manuel Pinto da Costa. 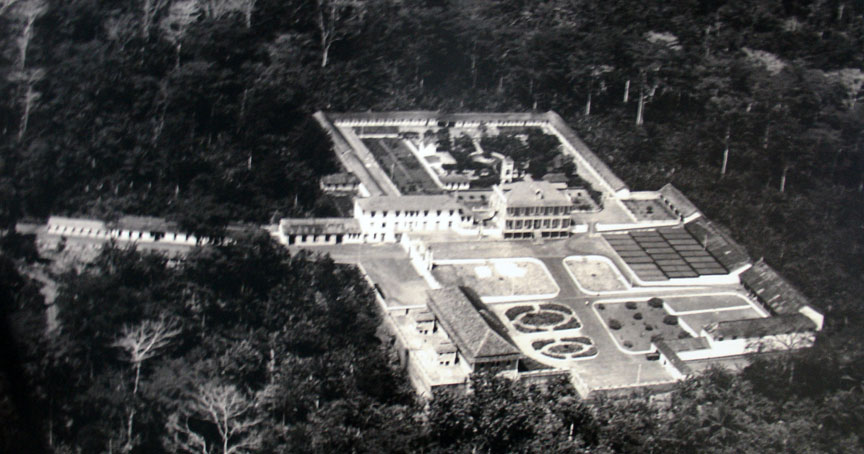 old photograph of a roça 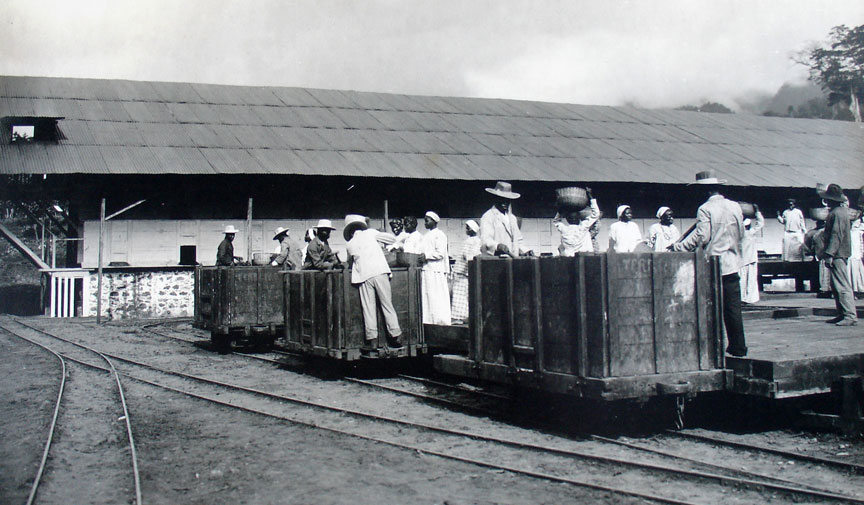 In 1990, São Tomé became one of the first African countries to embrace democratic reform, and changes to the constitution — the legalization of opposition political parties — led to elections in 1991 that were nonviolent, free, and transparent. Miguel Trovoada, a former prime minister who had been in exile since 1986, returned as an independent candidate and was elected president. Trovoada was re-elected in São Tomé's second multi-party presidential election in 1996. The Party of Democratic Convergence (PCD) overtook the MLSTP to take a majority of seats in the National Assembly, with the MLSTP becoming an important and vocal minority party. Municipal elections followed in late 1992, in which the MLSTP came back to win a majority of seats on five of seven regional councils. In early legislative elections in October 1994, the MLSTP won a plurality of seats in the Assembly. It regained an outright majority of seats in the November 1998 elections. The Government of São Tomé fully functions under a multi-party system. Presidential elections were held in July 2001. The candidate backed by the Independent Democratic Action party, Fradique de Menezes, was elected in the first round and inaugurated on September 3. Parliamentary elections were held in March 2002. For the next four years, a series of short-lived opposition-led governments were formed. 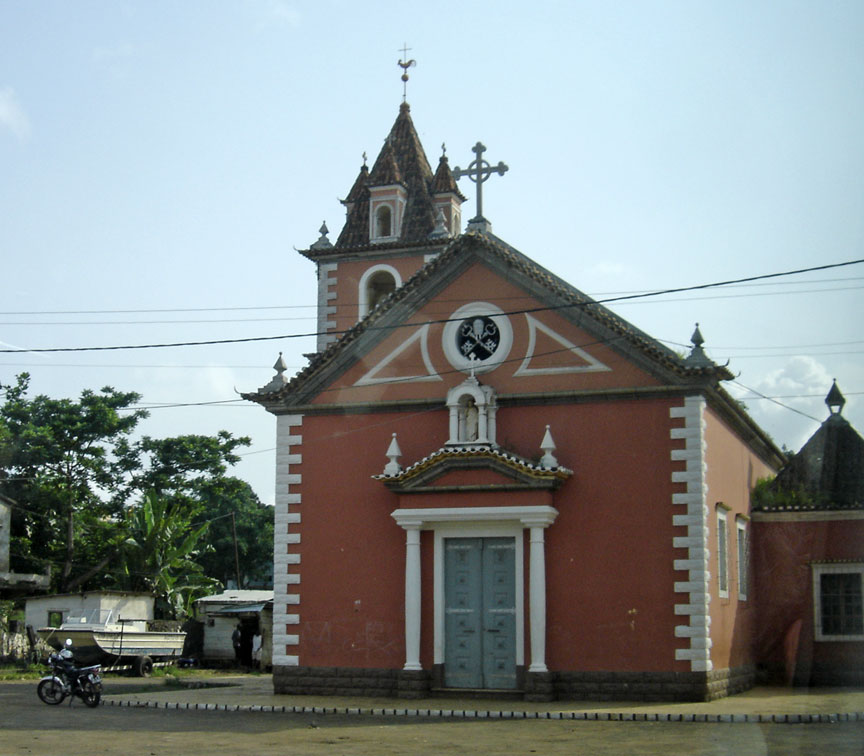 The army seized power for one week in July 2003, complaining of corruption and that forthcoming oil revenues would not be divided fairly. An accord was negotiated under which President de Menezes was returned to office.

The cohabitation period ended in March 2006, when a pro-presidential coalition won enough seats in National Assembly elections to form and head a new government. 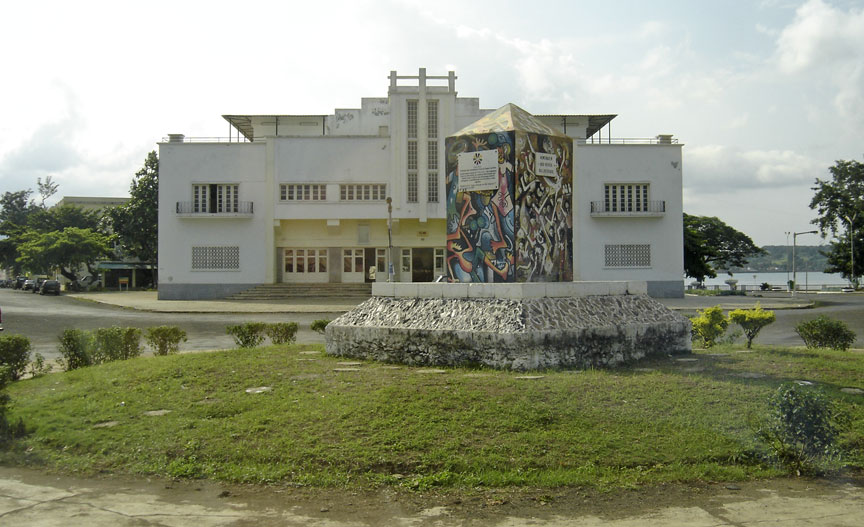 In the 30 July 2006 presidential election, Fradique de Menezes easily won a second five-year term in office, defeating two other candidates Patrice Trovoada (son of former President Miguel Trovoada) and independent Nilo Guimarães. Local elections, the first since 1992, took place on 27 August 2006 and were dominated by members of the ruling coalition. 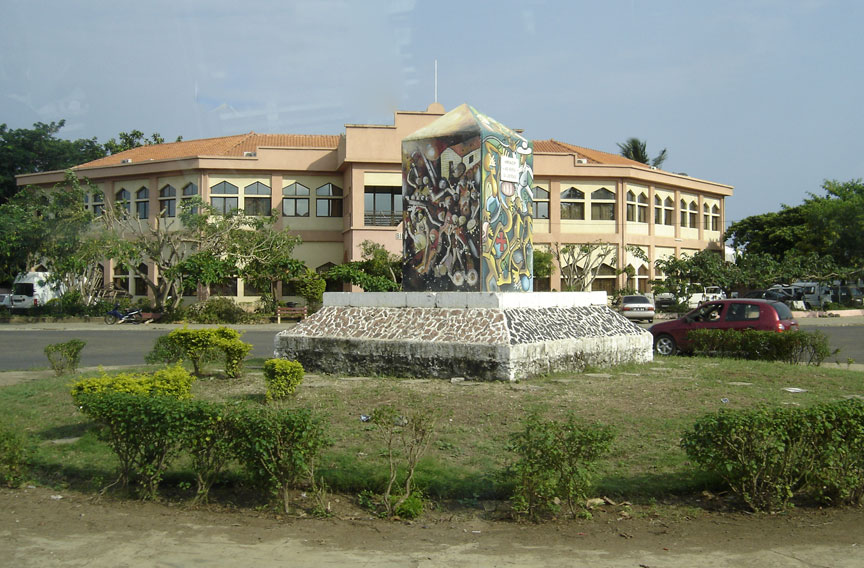 On February 12, 2009, there was an attempted coup d'état to overthrow President Fradique de Menezes. The coup plotters were imprisoned, but later received a pardon from President de Menezes.

São Tomé has functioned under a multiparty system since 1990. The president of the republic is elected to a 5-year term by direct universal suffrage and a secret ballot, and must gain an outright majority to be elected. The president may hold up to two consecutive terms. The prime minister is named by the president, and the fourteen members of cabinet are chosen by the prime minister. 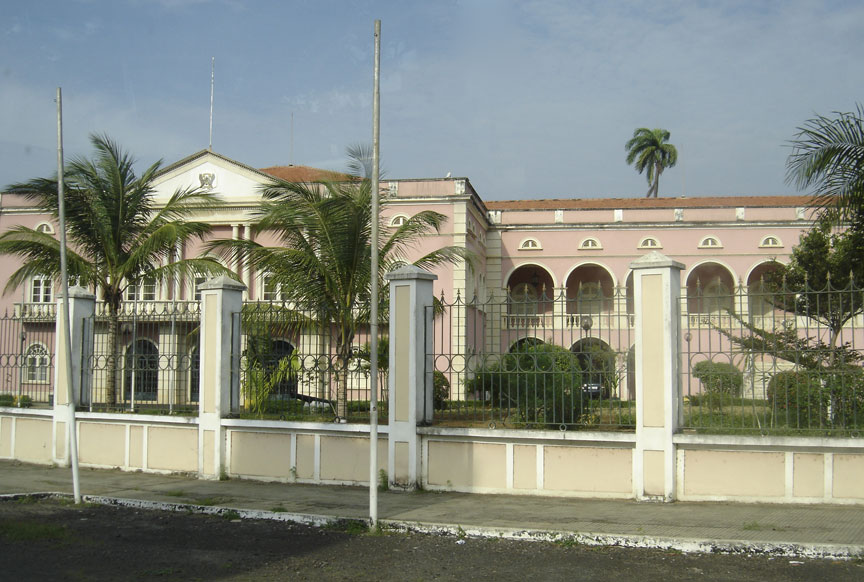 The National Assembly, the supreme organ of the state and the highest legislative body, is made up of 55 members, who are elected for a 4-year term and meet semiannually. Justice is administered at the highest level by the Supreme Court. The judiciary is independent under the current constitution. 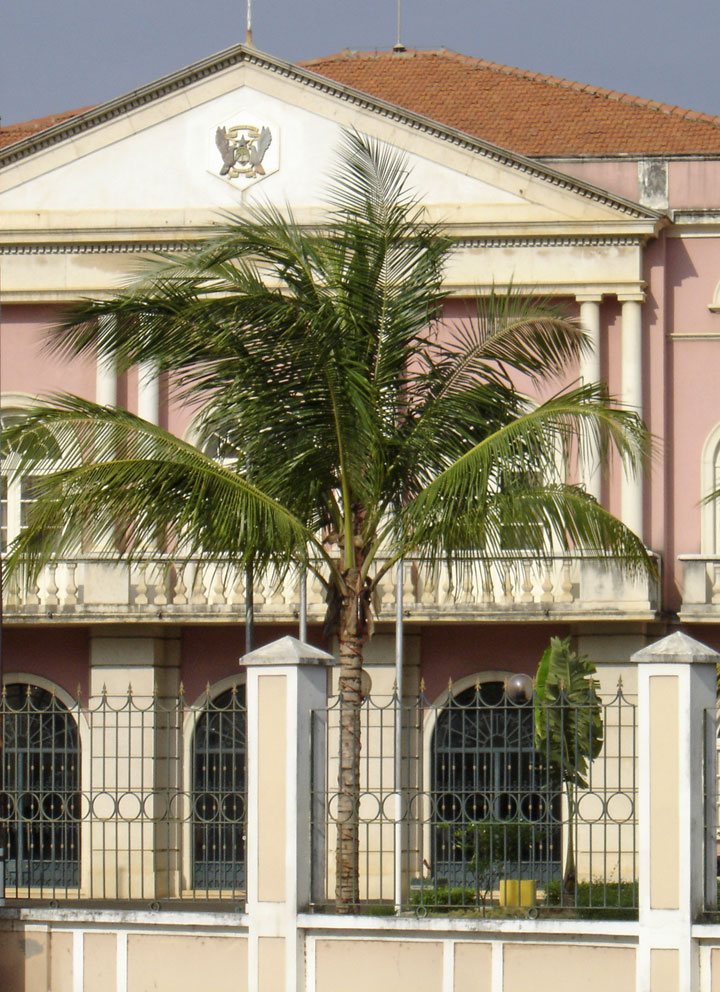 With regards to human rights, there exists the freedom of speech and the freedom to form opposition political parties. 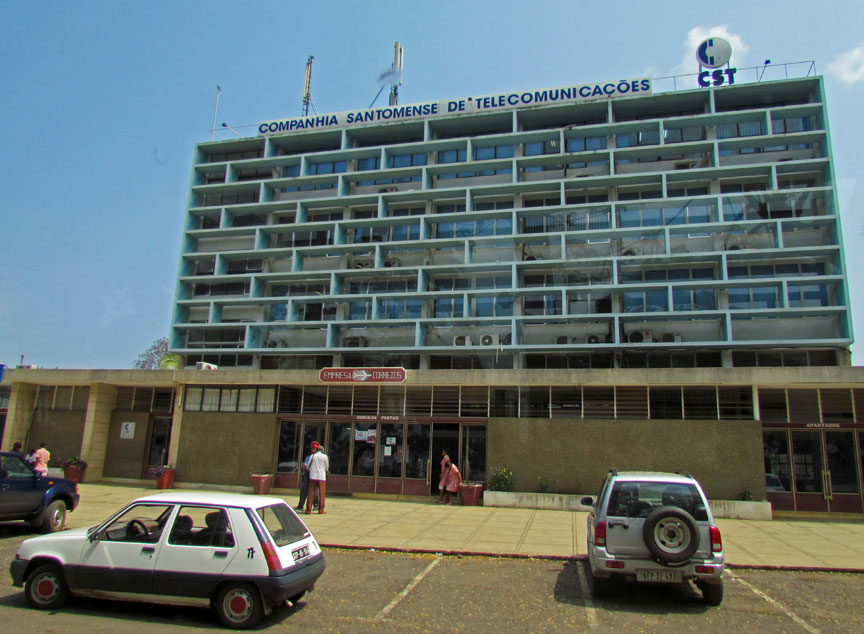 São Tomé and Príncipe finished 9th out of the 48 sub-Saharan African countries measured by the Ibrahim Index of African Governance, a comprehensive reflection of the levels of governance in Africa. 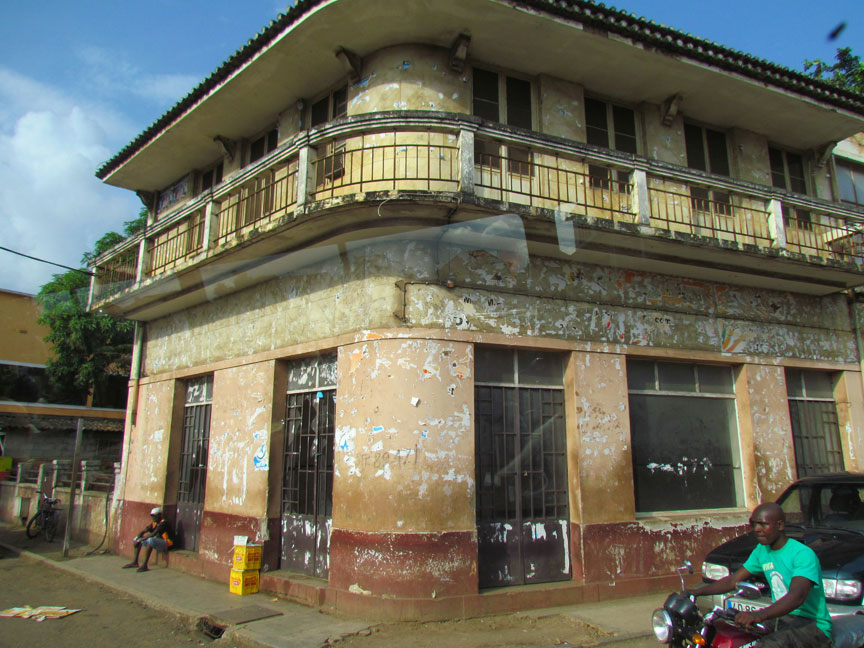 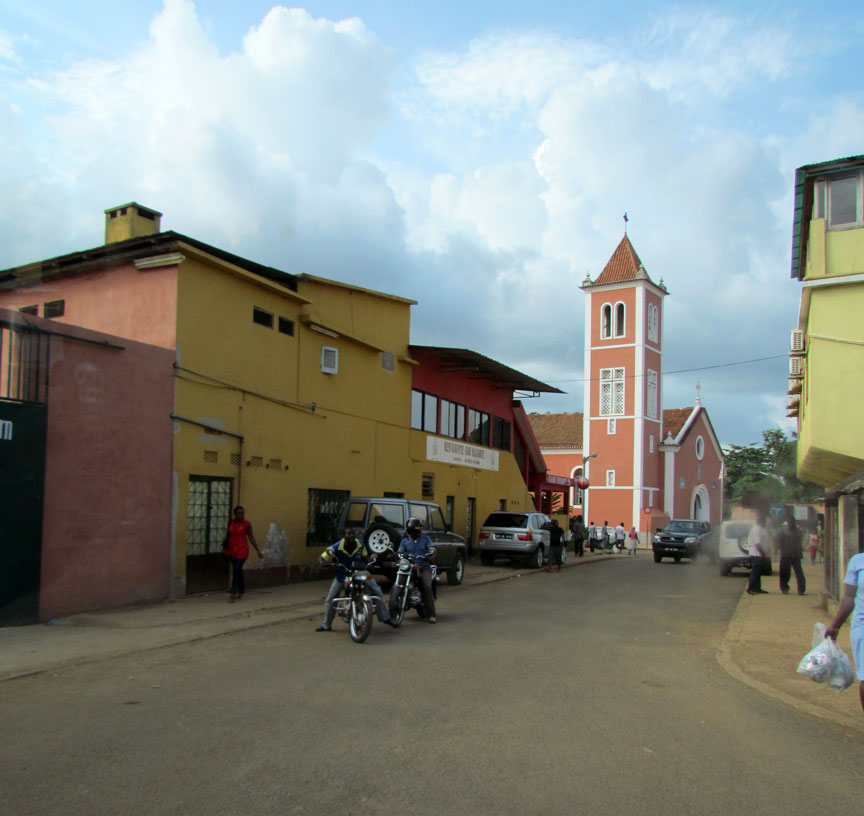 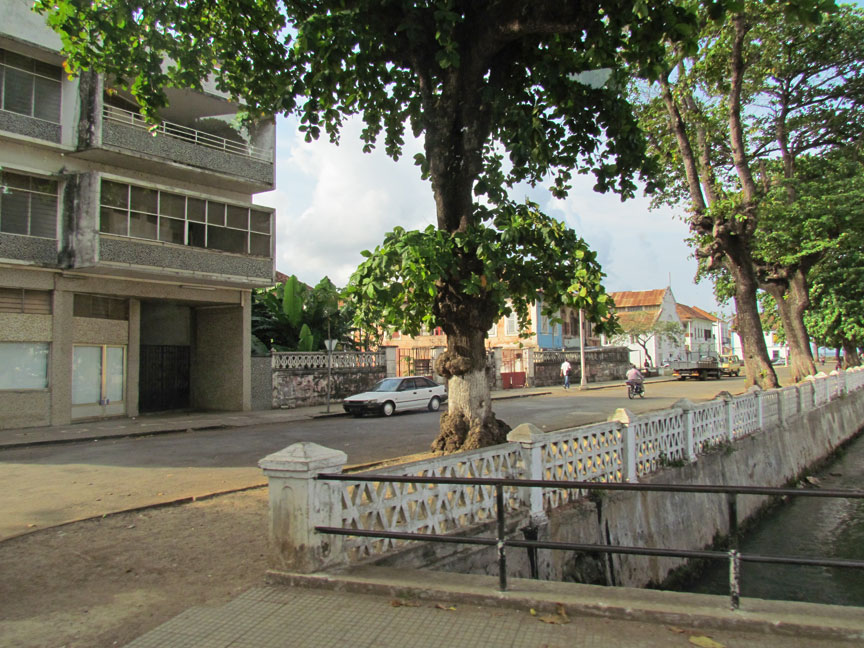 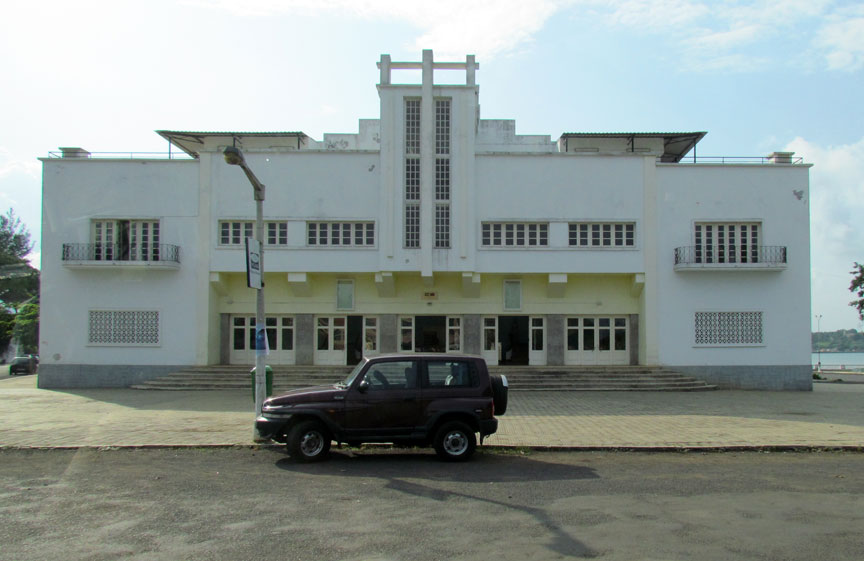 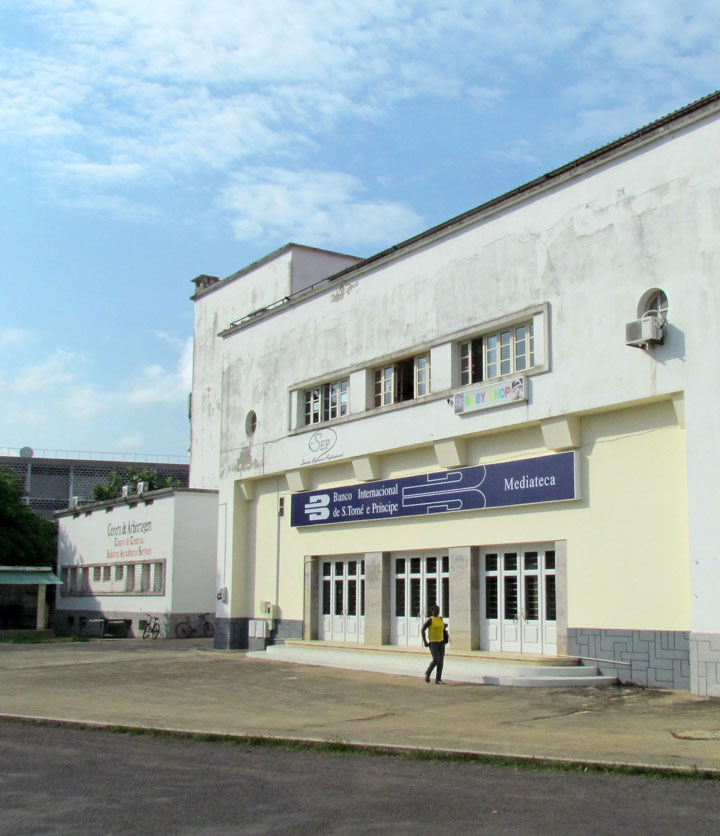 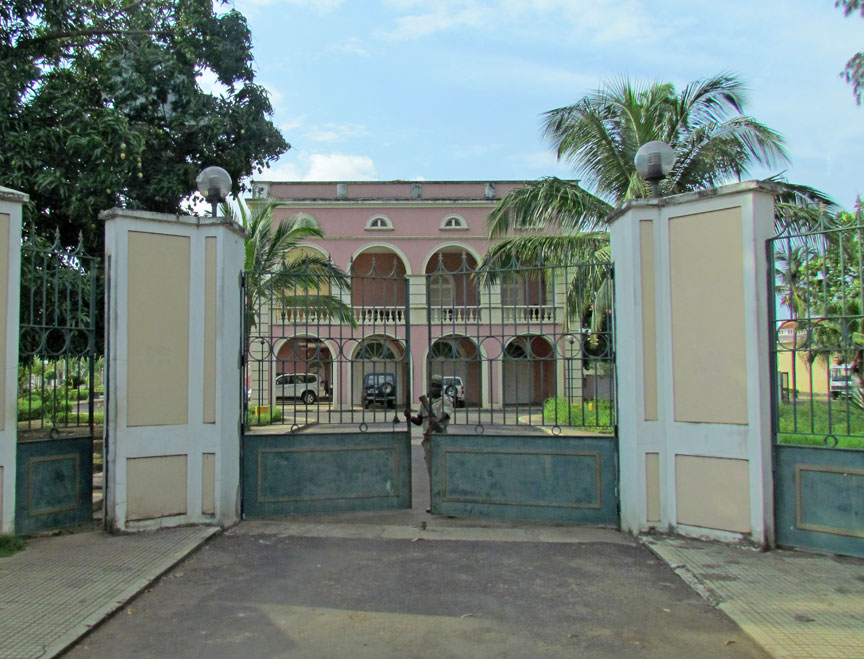