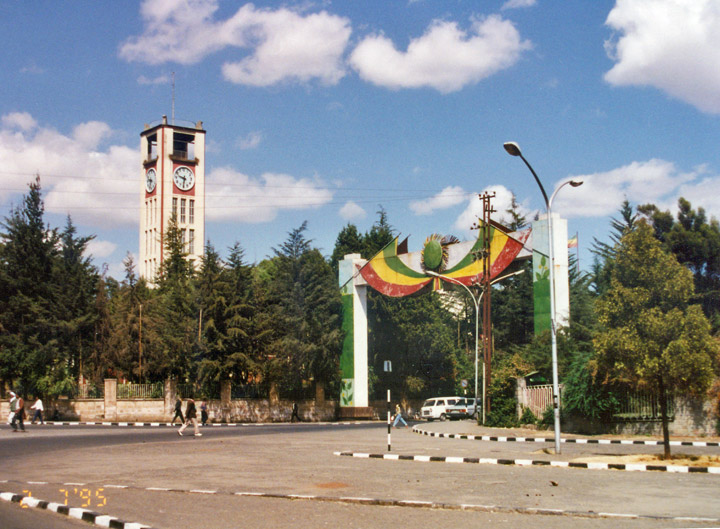 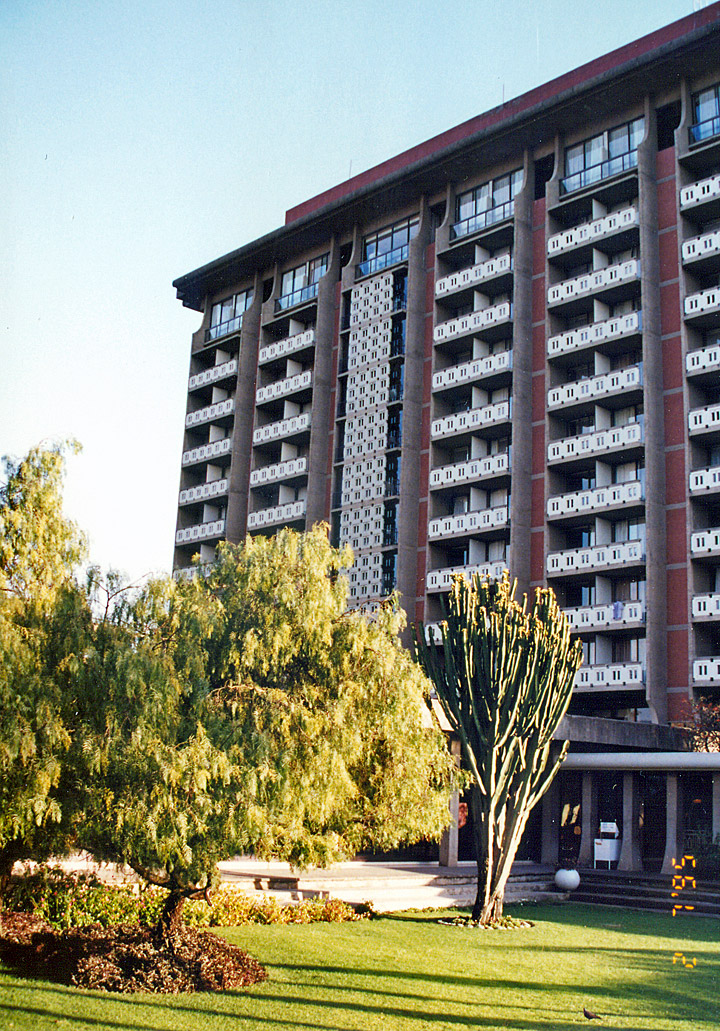 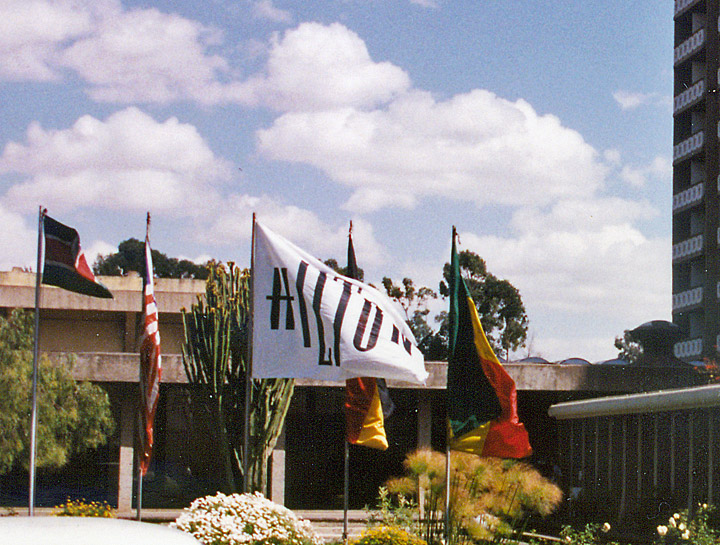 Addis Ababa, capital and largest city of Ethiopia, the country's commercial, manufacturing, and cultural center. It is situated in central Ethiopia at an elevation of about 2440 m (about 8000 ft) above sea level on a plateau that is crossed by numerous streams and surrounded by hills. It is the focus of a highway network, the site of an international airport, and the terminus of a railroad to the Gulf of Aden port of Djibouti, capital of the neighboring state of Djibouti. In the city are printing industries, and manufactures include footwear, clothing, asbestos and metal products, processed foods, cement, and plywood. Flourishing handicraft industries produce leather, metal, and textile goods, which are traded along with the regional agricultural produce, such as coffee, tobacco, and dairy items, in the vast open-air market known as the Mercato, on the western side of the city. 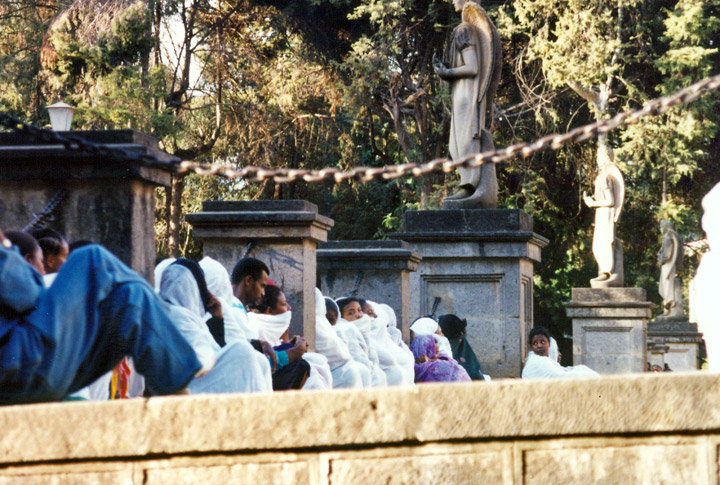 worshipers in the cathedral park

Addis Ababa is a sprawling city, well wooded, especially with eucalyptus trees, and crossed by broad avenues. Modern, multistoried buildings sit side by side with traditional one- and two-storied structures and open spaces. Its high elevation gives the city a mild, pleasant climate. The city is the seat of Addis Ababa University (1950), schools of music and art, and several research institutes. As headquarters of the Organization of African Unity and the United Nations Economic Commission for Africa, the city is the scene of many international conferences. Of note in the city are the octagon-shaped Saint George Coptic Christian Cathedral (1896), the modern Africa Hall with its dramatic stained-glass windows, and the Menelik II Palace, as well as several museums with collections of art, ethnology, and archaeology. 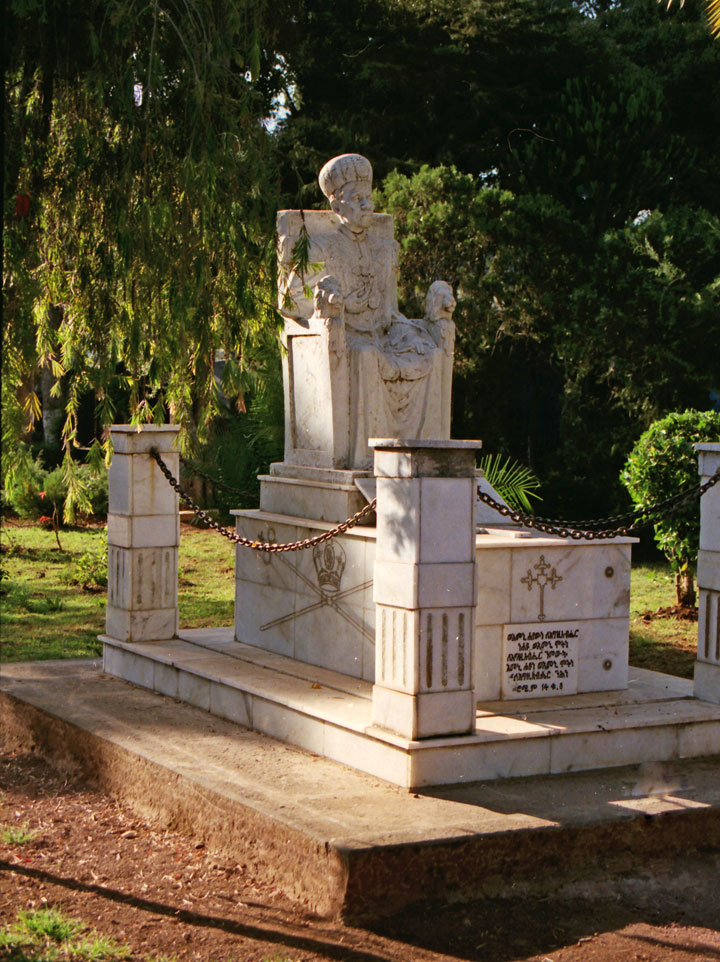 memorial for the religious leader

The modern city was founded in 1887 at the site of a hot springs by Emperor Menelik II and given the name Addis Ababa, Amharic for "new flower." It became the national capital in 1889. The city's somewhat haphazard and unplanned growth was spurred by the completion in 1917 of the railroad to Djibouti. From 1936 to 1941 Addis Ababa was occupied by the Italians, who made it the capital of Italian East Africa and instituted extensive modernization projects. Between 1960 and 1970 the population of the city nearly doubled, and new light manufacturing industries were established. In 1963 the charter establishing the Organization of African Unity was signed here. Population 1,047,300 (1994 estimate). 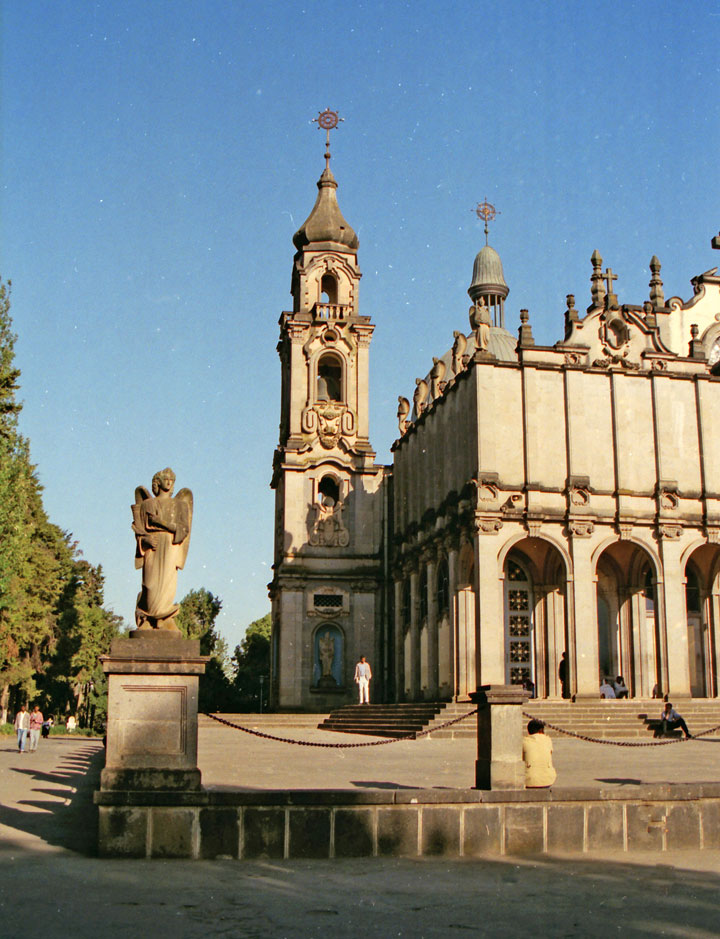 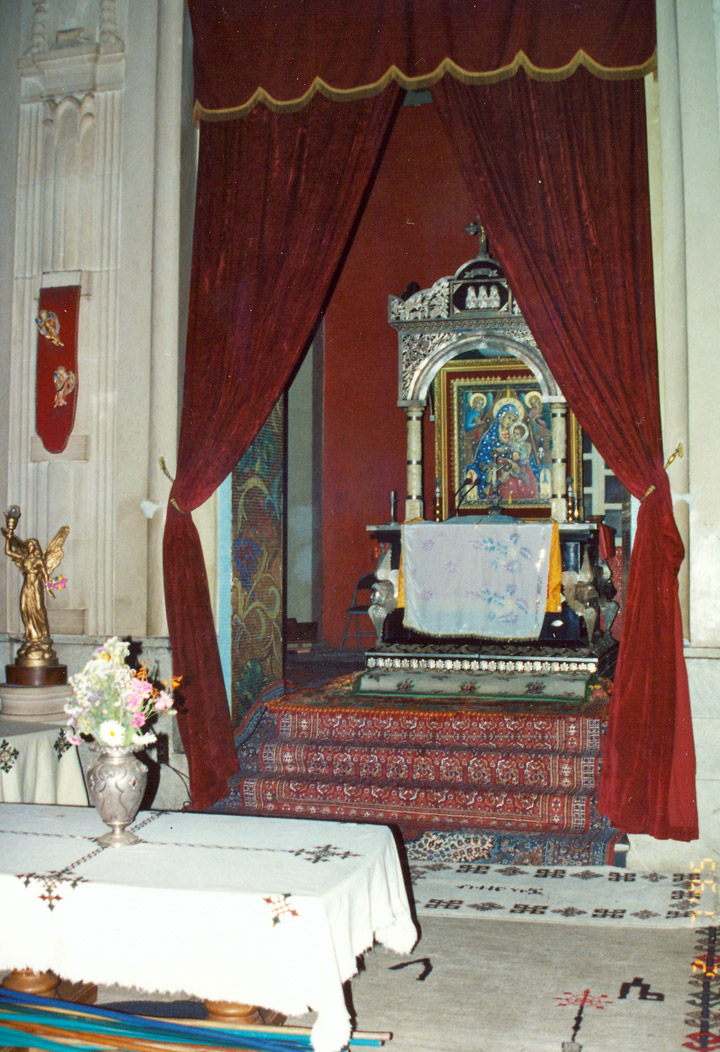 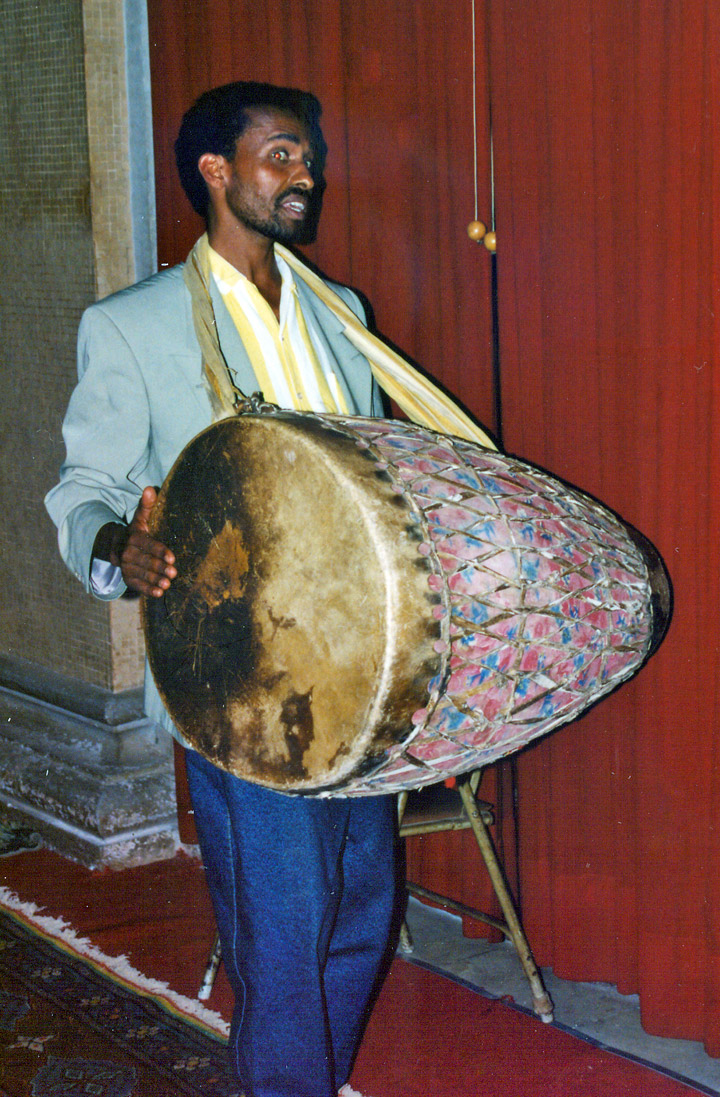 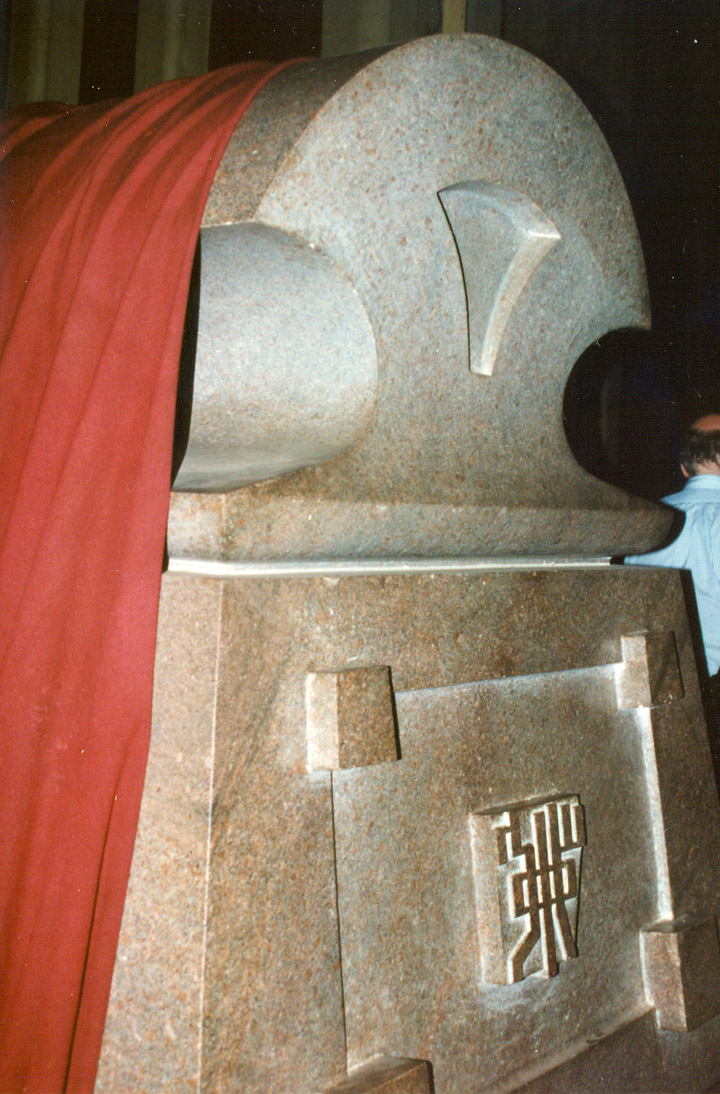 Haile Selassie I (1892-1975), last emperor of Ethiopia (1930-74).  Born near Hârer on July 23, 1892, and originally named Tafari Makonnen, Selassie was a grandnephew of Emperor Menelik II. In 1916 he ousted Menelik's successor, Lij Iyasu, replacing him with Zauditu, the old emperor's daughter, and made himself regent. When Zauditu died in 1930, he succeeded her, taking the name Haile Selassie I, which means "Might of the Trinity." His other titles included Conquering Lion of the Tribe of Judah, Elect of God, and King of Kings. 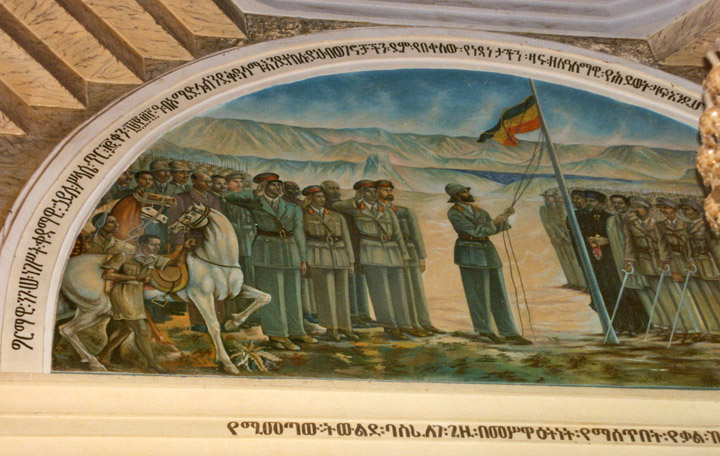 mural in the cathedral of Haile Selassie

In 1931 Selassie granted his subjects a constitution. Although limited, it established a Parliament and a court system; all formal power, however, remained with the emperor. In 1935 the Italians invaded Ethiopia, and Selassie, after attempting to resist them and making an impressive but vain plea for help before the League of Nations, went into exile in England in May 1936. There he helped the British plan the campaign that led to the liberation of Ethiopia and his return to power in 1942. The emperor then began rebuilding his war-torn country. Among his accomplishments were a major land reform (1942 and 1944), emancipation of slaves (1942), and a revised and somewhat broadened constitution (1955) that provided for universal suffrage. 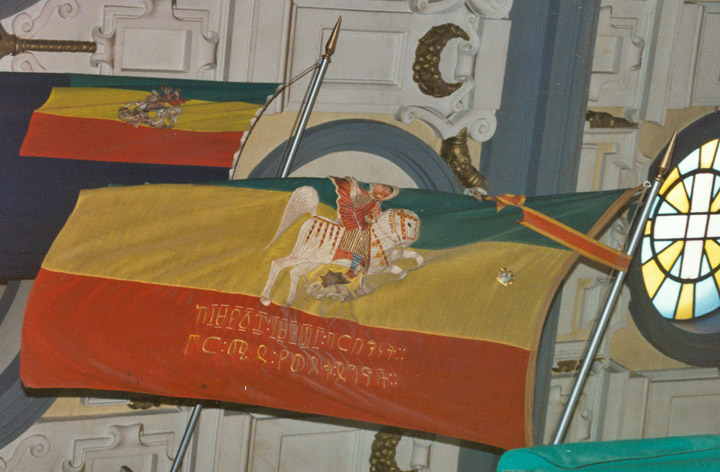 An attempt to overthrow Selassie in 1960 was quickly aborted by loyalist factions. By 1974, however, worsening conditions-corruption in government, inflation, drought, starvation, and his hesitancy in dealing with these and other emergencies-led to a revolt by the army and Selassie's removal from power. He was formally deposed in September 1974 and died in Addis Ababa on August 27, 1975. 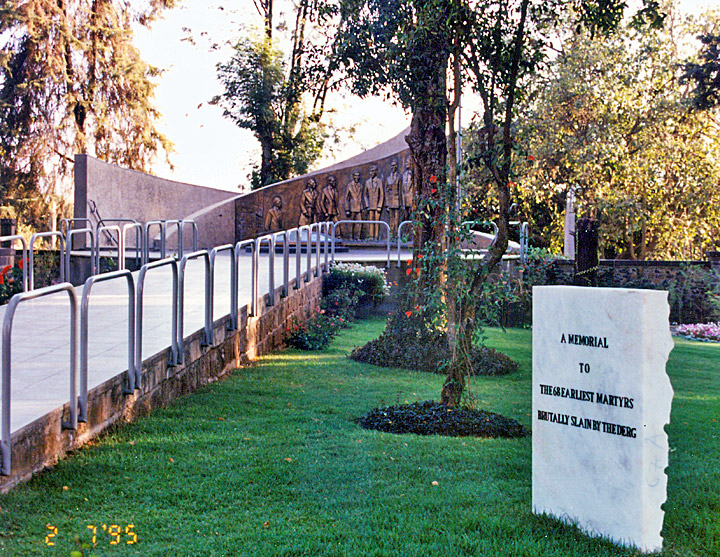 memorial to the martyrs of the recent changes 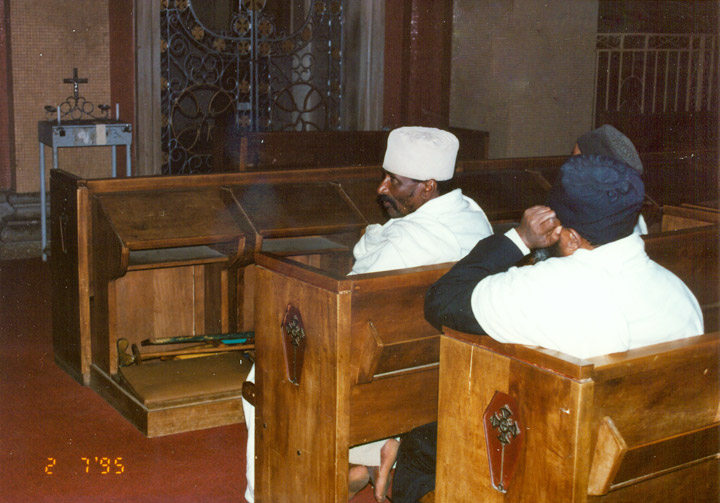 worshipers in the cathedral 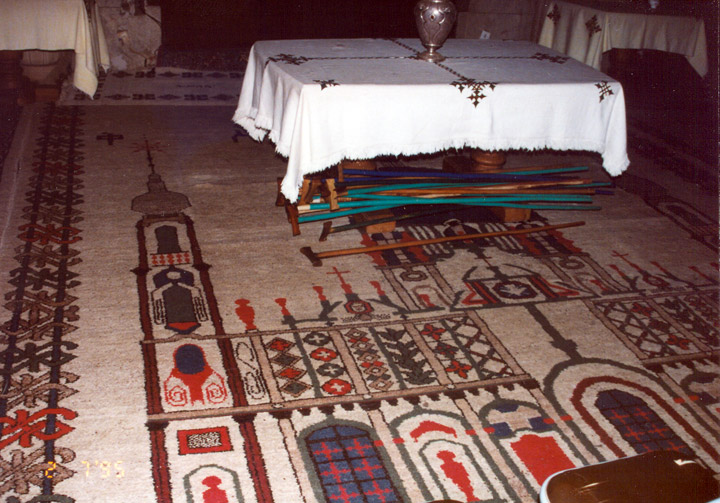 a carpet in a part of the cathedral 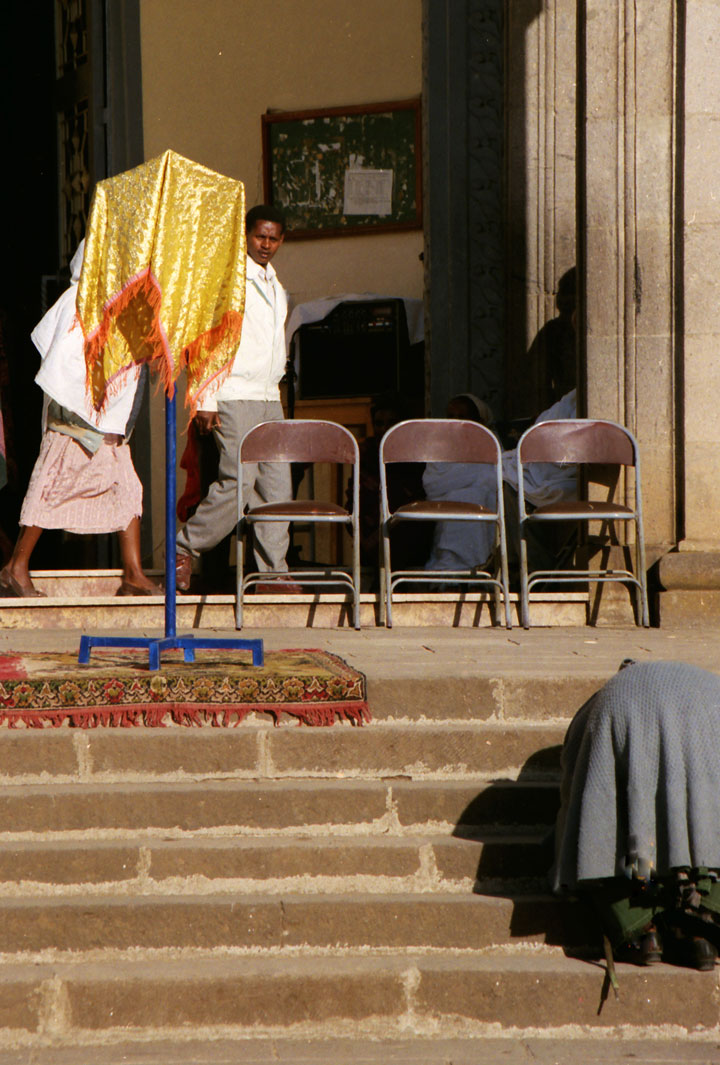 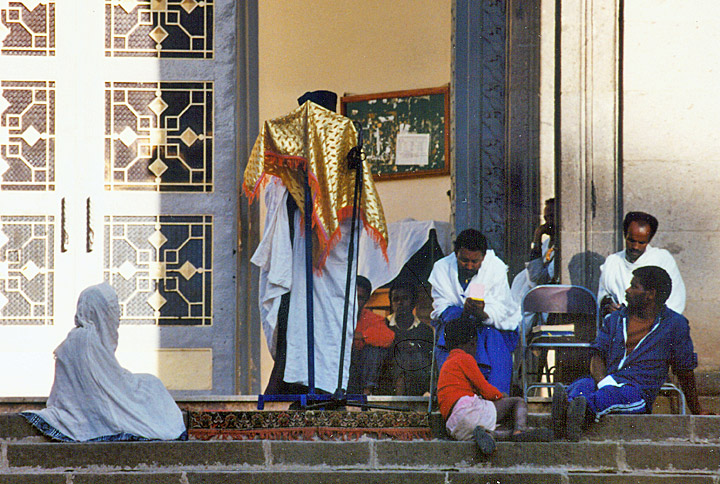