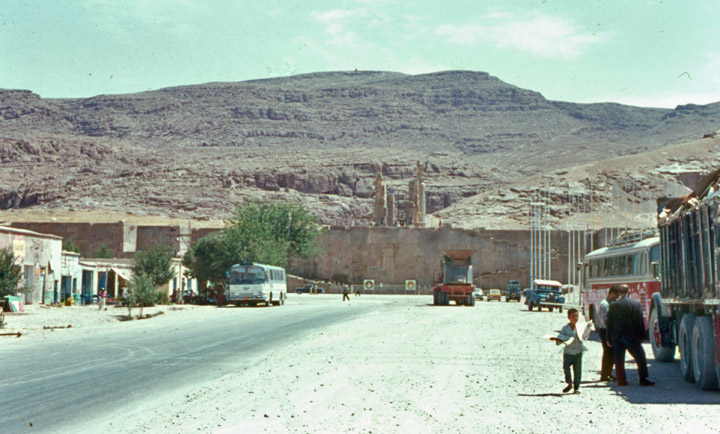 the site of the rulers of the ancient Persian Empire

An ancient capital of the Achaemenian kings of Iran (Persia), located about 32 miles (51 km) northeast of Shīrāz in the region of Fars in southwestern Iran. The site lies near the confluence of the small river Pulvār (Rūdkhāneh-ye Sīvand) with the Rūd-e Kor. 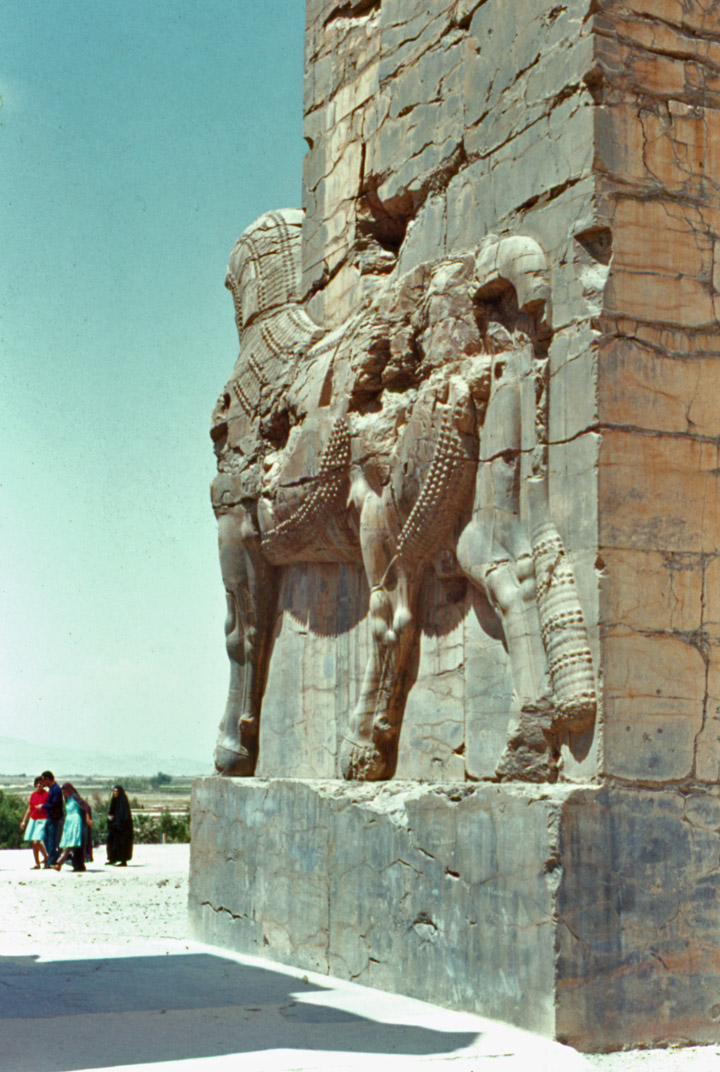 Though archaeologists have discovered evidence of prehistoric settlement, inscriptions indicate that construction of the city began under Darius I the Great (reigned 522–486 BC), who, as a member of a new branch of the royal house, made Persepolis the capital of Persia proper, replacing Pasargadae, the burial place of Cyrus the Great. Built in a remote and mountainous region, Persepolis was an inconvenient royal residence, visited mainly in the spring. The effective administration of the Achaemenian Empire was carried on from Susa, Babylon, or Ecbatana. 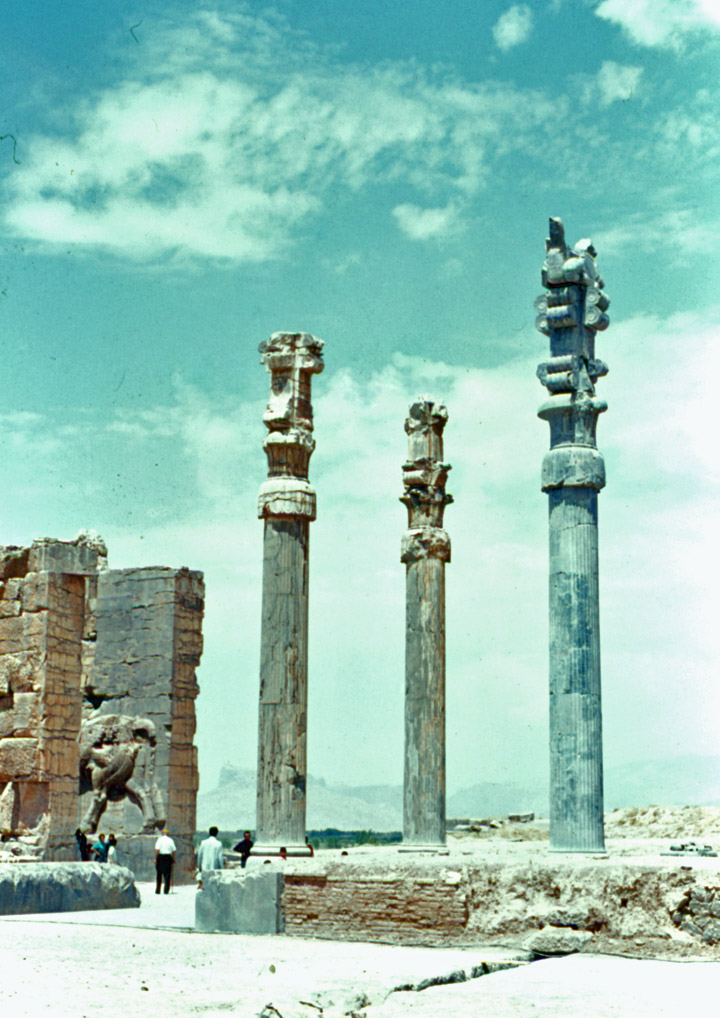 This accounts for the Greeks being unacquainted with Persepolis until Alexander the Great's invasion of Asia. In 330 BC Alexander plundered the city and burned the palace of Xerxes, probably to symbolize the end of his Panhellenic war of revenge. In 316 BC Persepolis was still the capital of Persis as a province of the Macedonian empire. The city gradually declined in the Seleucid period and after, its ruins attesting its ancient glory. In the 3rd century AD the nearby city of Istakhr became the centre of the Sāsānian empire. 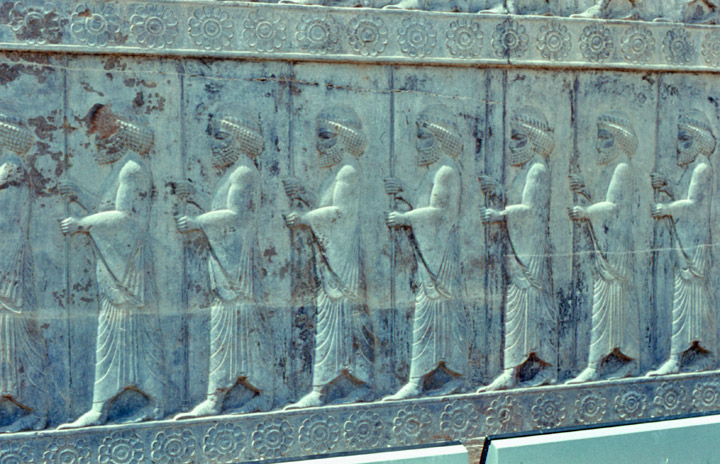 relief from the stairway

The site is marked by a large terrace with its east side leaning on the Kūh-e Raḥmat (Mount of Mercy). The other three sides are formed by a retaining wall, varying in height with the slope of the ground from 13 to 41 feet (4 to 12 m); on the west side a magnificent double stair in two flights of 111 easy stone steps leads to the top. On the terrace are the ruins of a number of colossal buildings, all constructed of a dark gray stone, (often polished to the consistency of marble) from the adjacent mountain. 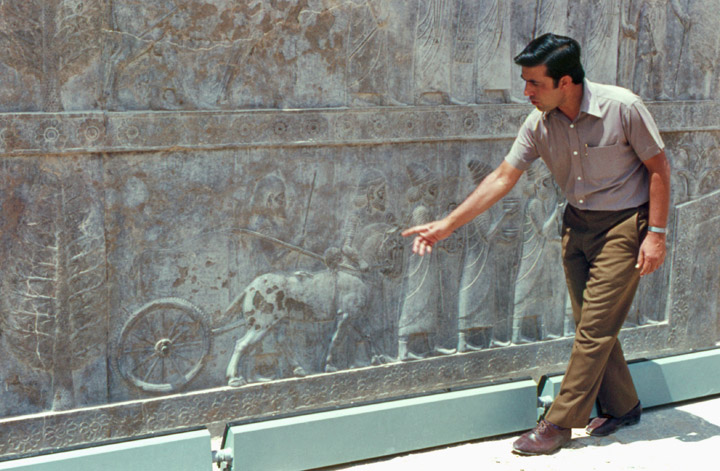 Guide pointing out the chariot relief

The stones, of great size, cut with the utmost precision, were laid without mortar, and many of them are still in place. Especially striking are the huge columns, 13 of which still stand in Darius the Great's audience hall, known as the apadana, the name given to asimilar hall built by Darius at Susa. There are two more columns still standing in the entrance hall of the Gate of Xerxes, and a third has been assembled there from its broken pieces. 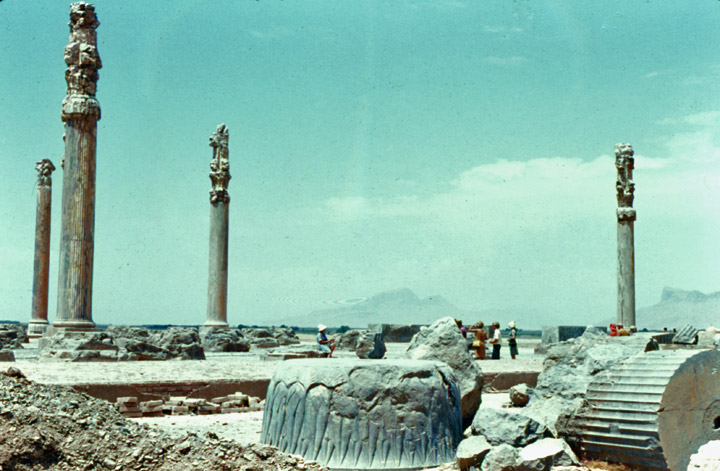 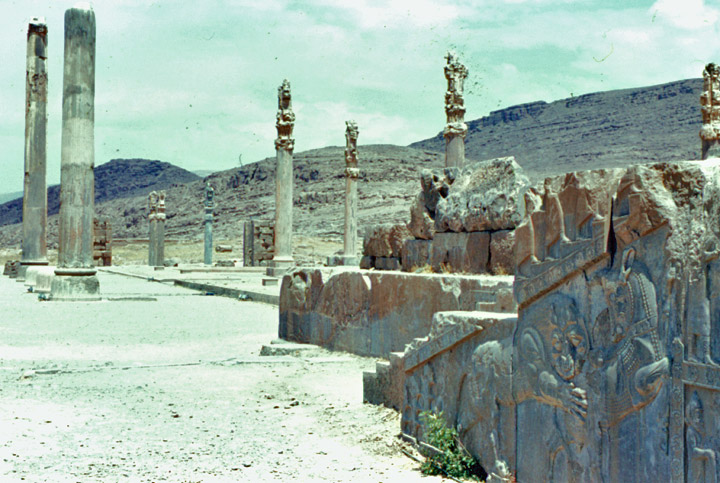 The oldest of these on the south retaining wall gives Darius' famous prayer for his people: “God protect this country from foe, famine and falsehood.” There are numerous reliefs of Persian, Median, and Elamite officials, and 23 scenes separated by cypress trees depict representatives from the remote parts of the empire who, led by a Persian or a Mede, made appropriate offerings to the king at the national festival of the vernal equinox.x. 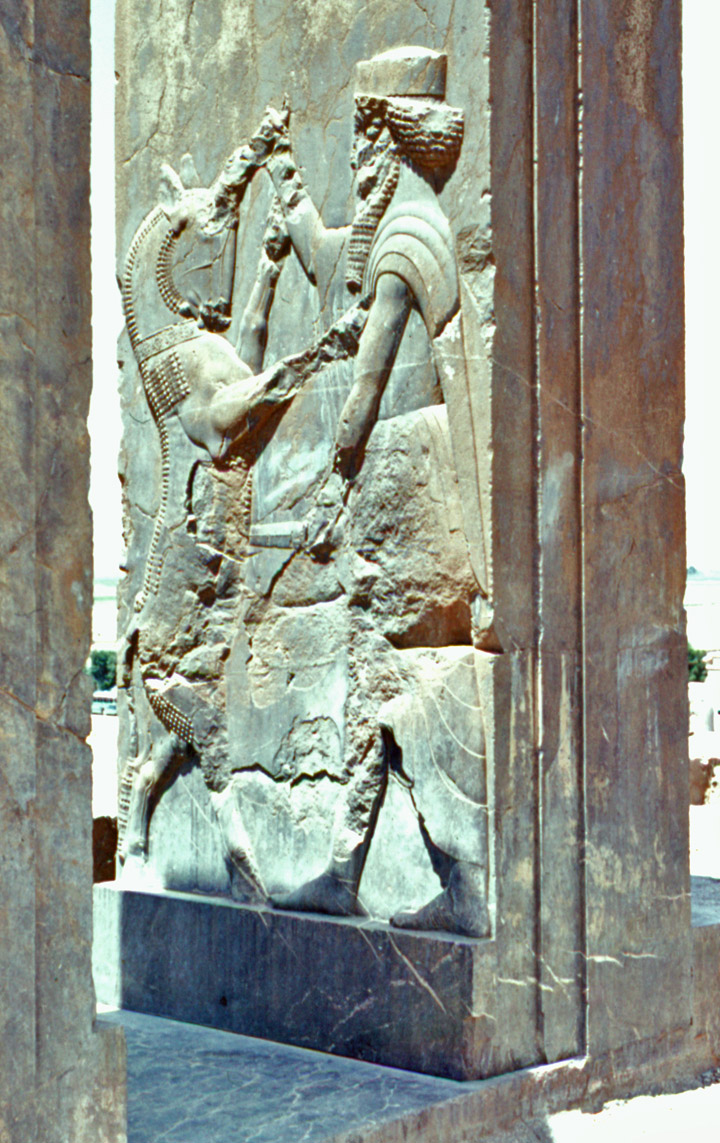 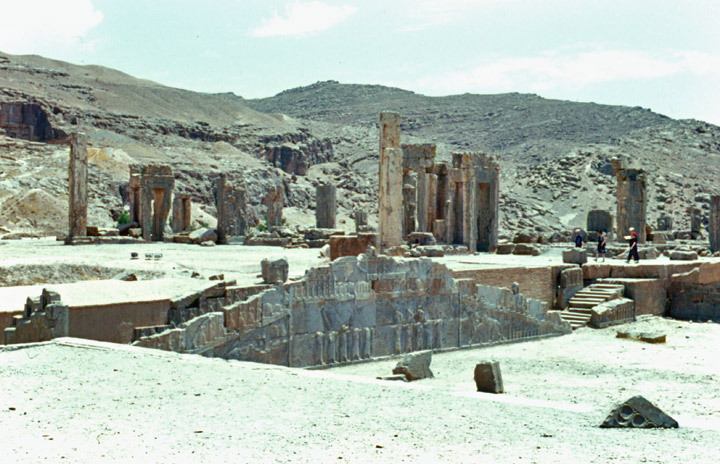 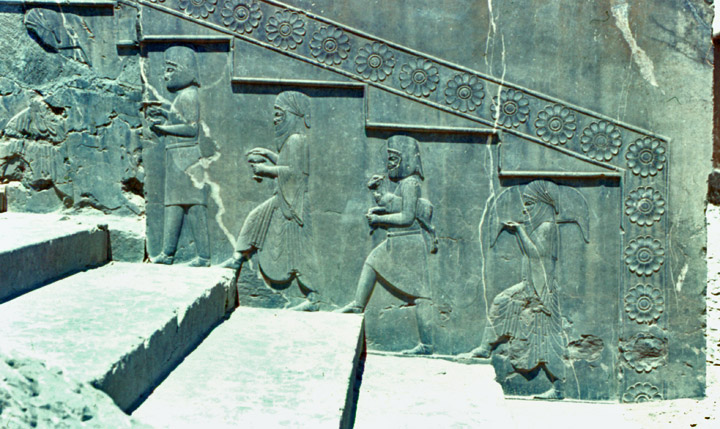 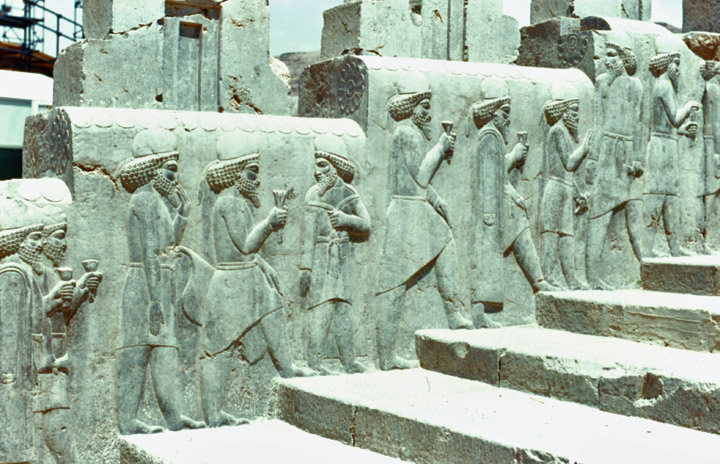 presenting gifts to the rulers 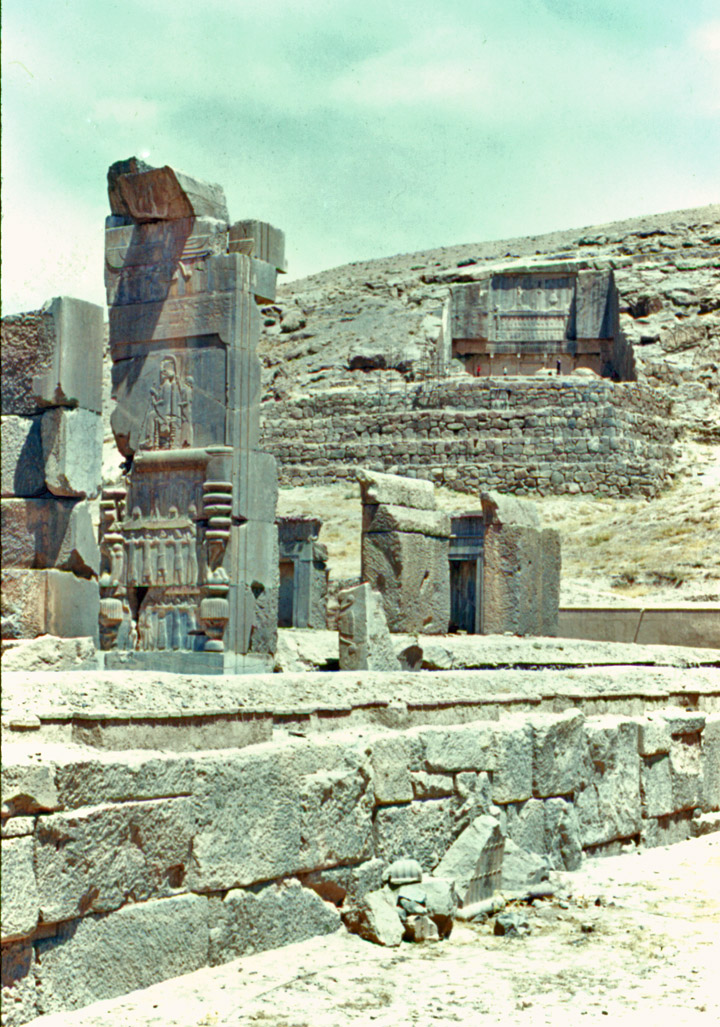 tomb behind the palace 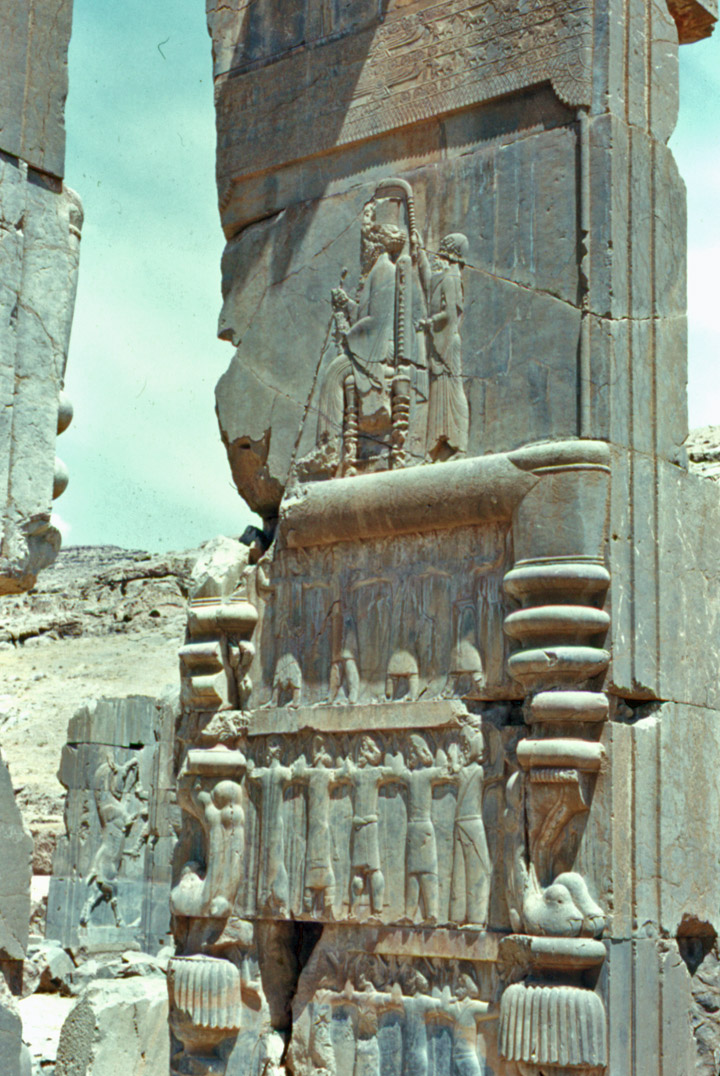 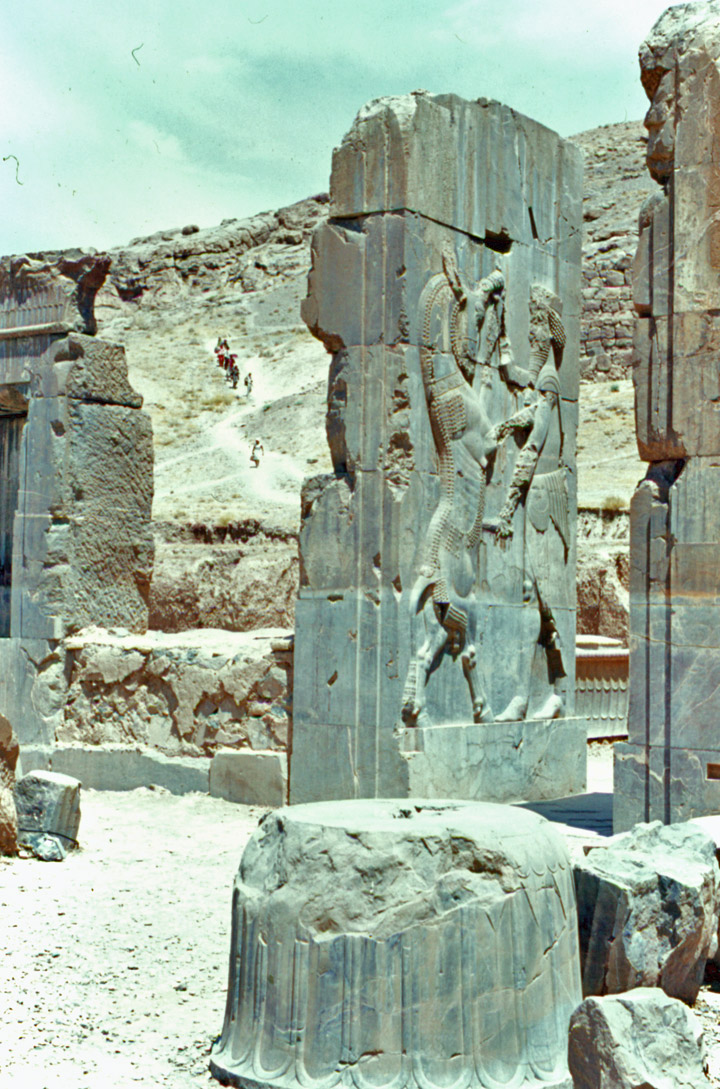 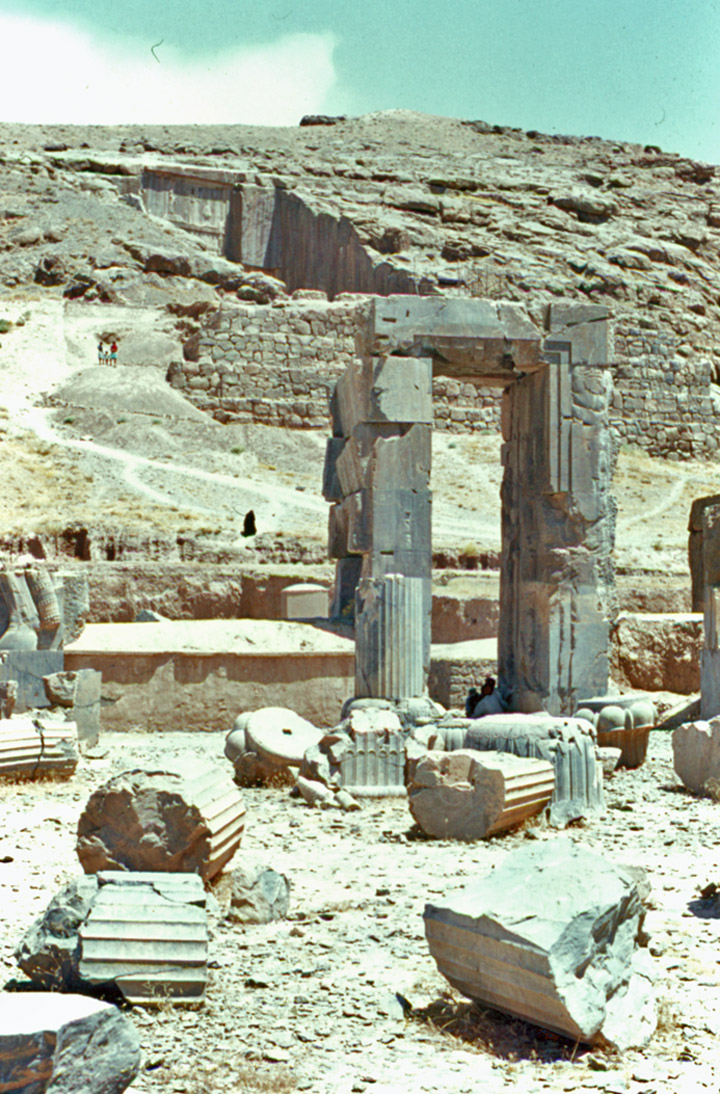 partial view of the tomb behind the palace 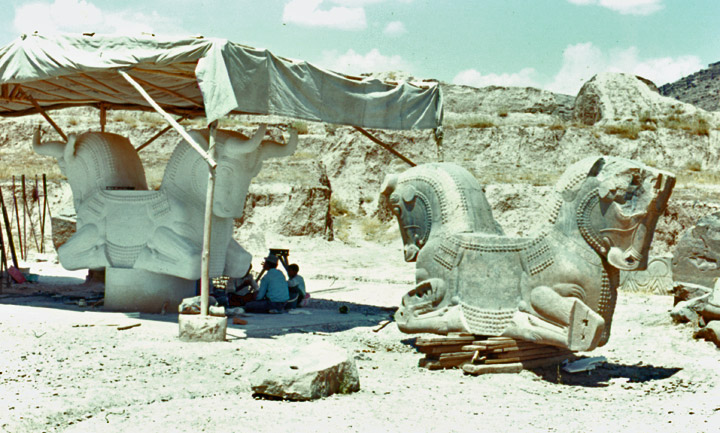 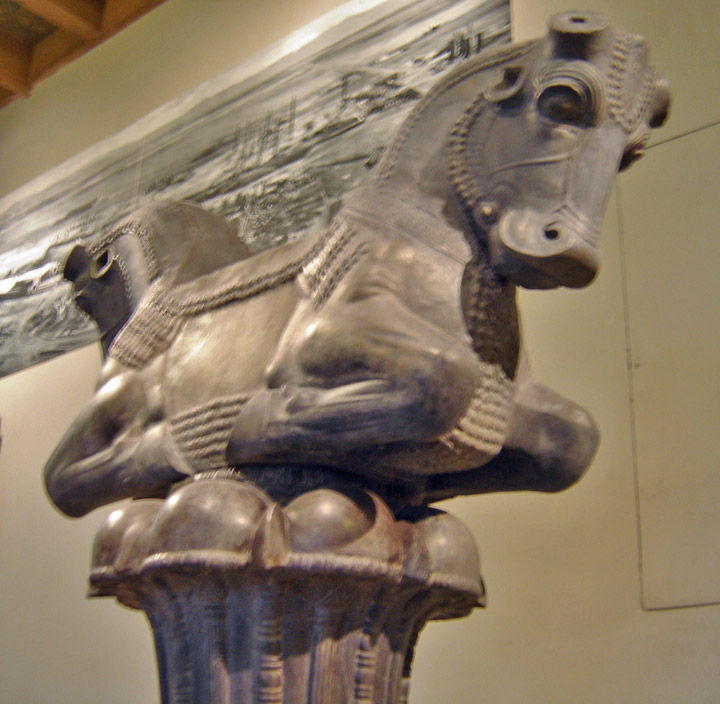 Persepolis horse figure, now at the Oriental Institute, Chicago
(brought back from an early site excavation by the University of Chicago) 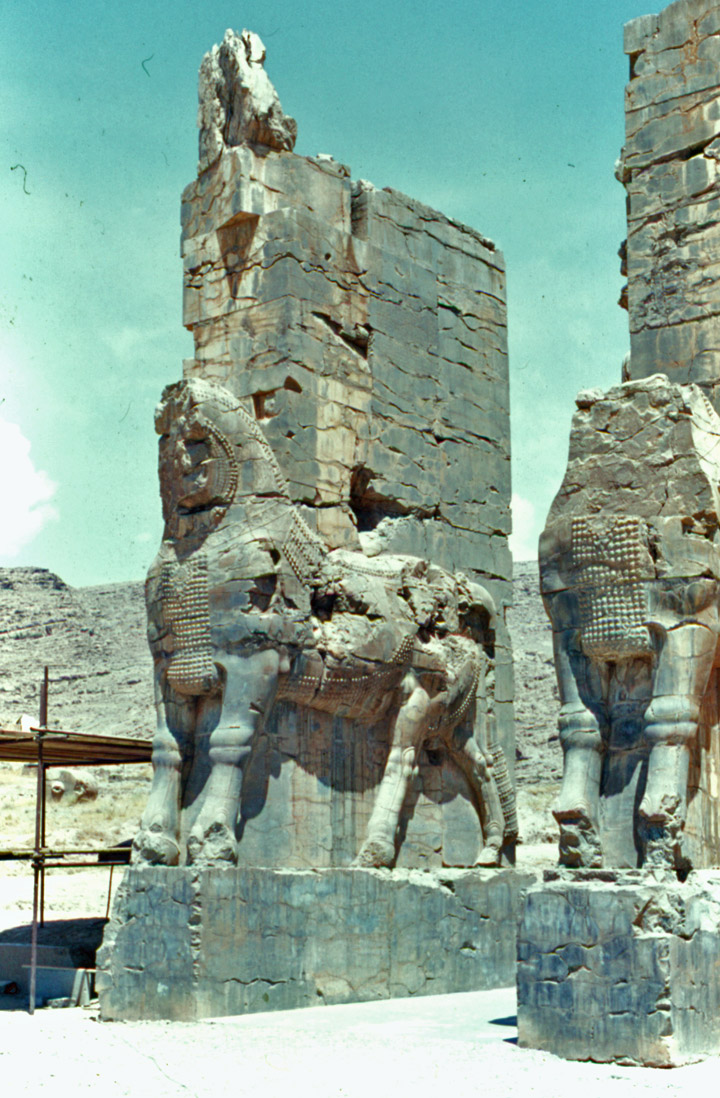 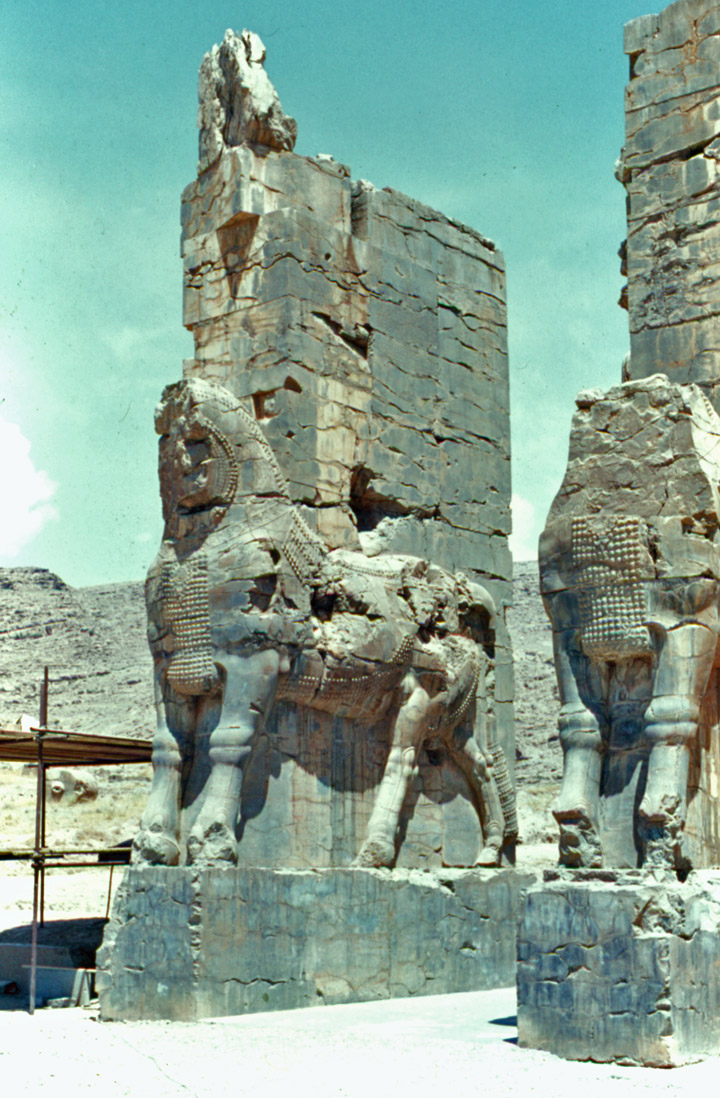 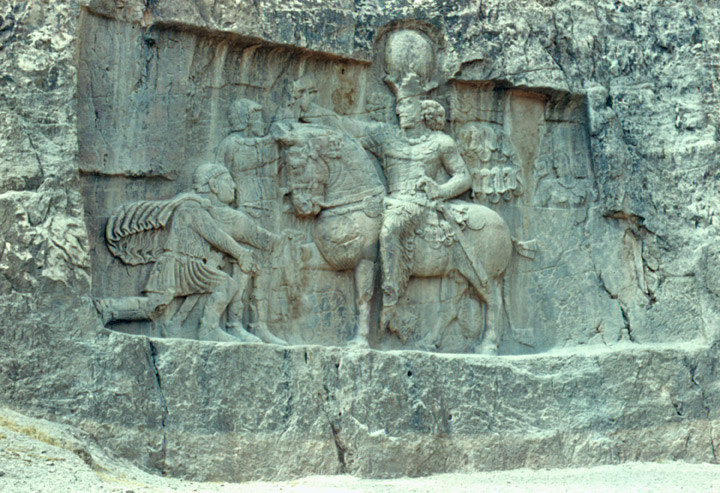 homage to the ruler

Return to the Iran page