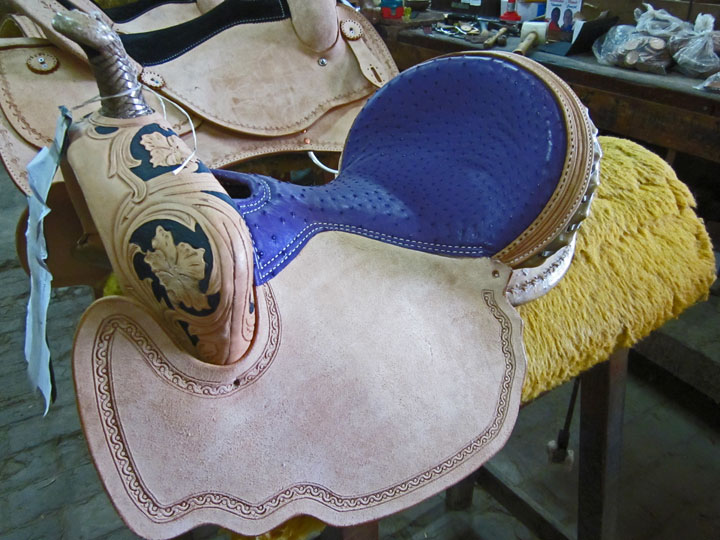 A saddle is a supportive structure for a rider or other load, fastened to an animal's back by a girth. The most common type is the equestrian saddle designed for a horse, but specialized saddles have been created for camels and other creatures. The earliest saddles were simple pads attached with a surcingle seen by 800 BC, with the saddle tree coming into use circa 200 BC, and paired stirrups by 302 AD. Saddles in the styles seen today date back to the 18th and 19th centuries. Today, modern saddle comes in a wide variety of styles, each designed for a specific equestrianism discipline, and require careful fit to both the rider and the horse. Proper saddle care can extend the useful life of a saddle, often for decades.

Western saddles are used for western riding and are the saddles used on working horses on cattle ranches throughout the United States, particularly in the west. They are the "cowboy" saddles familiar to movie viewers, rodeo fans, and those who have gone on trail rides at guest ranches. This saddle was designed to provide security and comfort to the rider when spending long hours on a horse, traveling over rugged terrain.

The design of the Western saddle derives from the saddles of the Spanish vaqueros - the early horse trainers and cattle handlers of Mexico and the American Southwest. It was developed for the purpose of working cattle across vast areas, and came from a combination of the saddles used in the two main styles of horseback riding then practiced in Spain — la jineta, the Moorish style which allowed great freedom of movement to the horse; and la estradiota, later la brida, the jousting style, which provided great security to the rider and strong control of the horse. A very functional item was also added: the saddle "horn." This style of saddle allowed vaqueros to control cattle by use of a rope around the neck of the animal, tied or dallied (wrapped without a knot) around the horn.

Today, although many Western riders have never roped a cow, the western saddle still features this historical element. (Some variations on the Western saddle design, such as those used in bronc riding, endurance riding and those made for the rapidly growing European market, do not have horns.) Another predecessor which may have contributed to the design of the Western saddle was the Spanish tree saddle, which was also influential in the design of the McClellan saddle of the American military, being used by all branches of the U.S. Army, but being particularly associated with the cavalry. 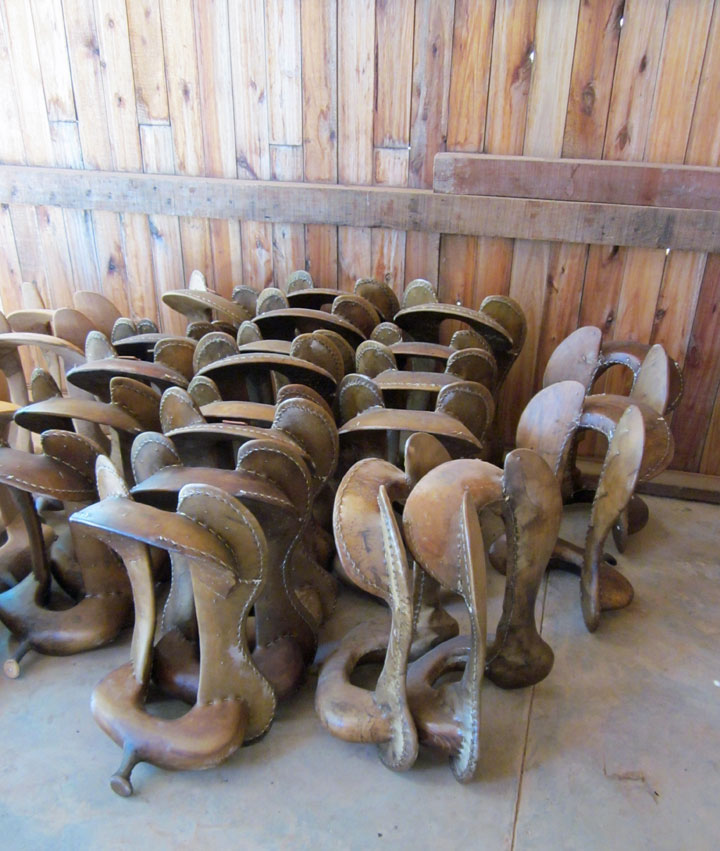 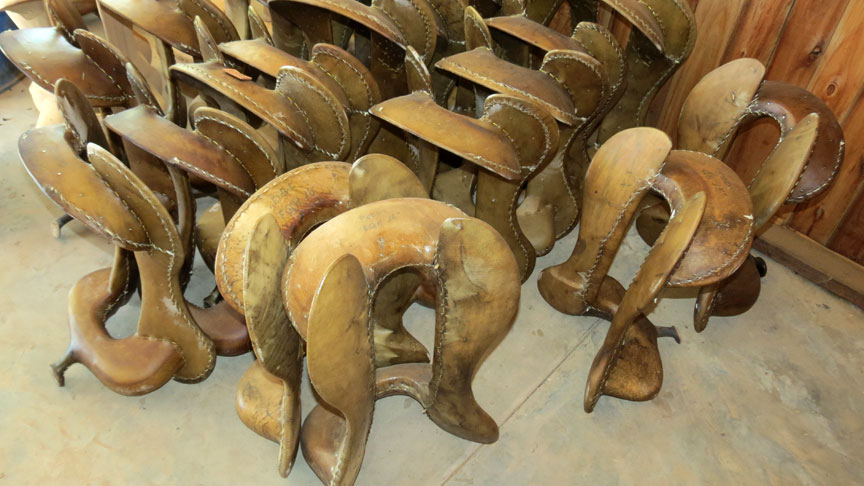 The Western saddle is designed to be comfortable when ridden in for many hours. Its history and purpose is to be a working tool for a cowboy who spends all day, every day, on horseback. For a beginning rider, the western saddle may give the impression of providing a more secure seat. However, this may be misleading; the horn is not meant to be a handle for the rider to hang onto, and the high cantle and heavy stirrups are not for forcing the rider into a rigid position. The development of an independent seat and hands is as critical for western riders as for English riders. 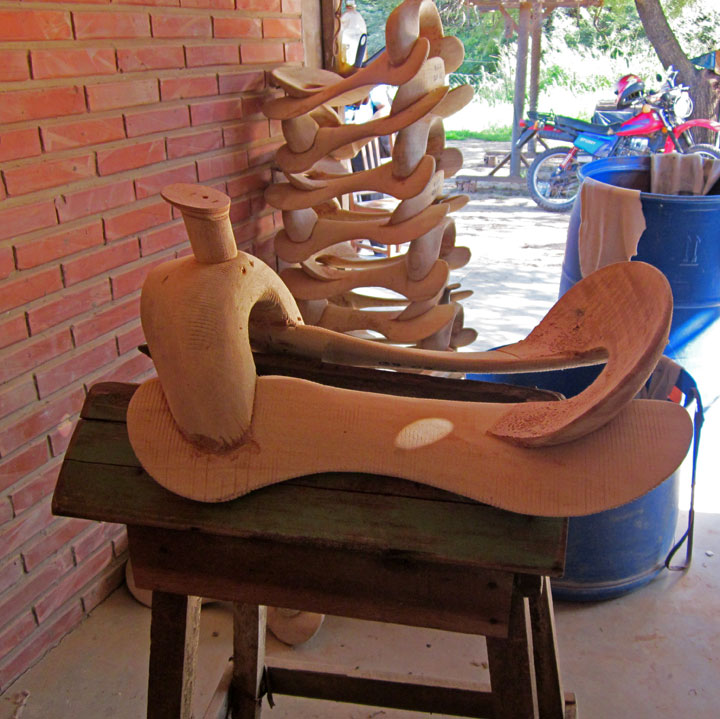 The modern western saddle begins with a "tree" that defines the shape of the bars, the seat, the swells, horn, and cantle. Traditional trees are made of wood covered with rawhide, coated with varnish or a similar modern synthetic coating. In some cases, the core of the horn may be of metal. Modern synthetic materials of various types have also been used instead of wood, but while lighter and less expensive, are generally considered weaker than traditional materials, some, such as fiberglass, dangerously so. A high-quality tree is at the heart of a good saddle, particularly those used for sports such as steer roping, where the equipment must withstand considerable force. 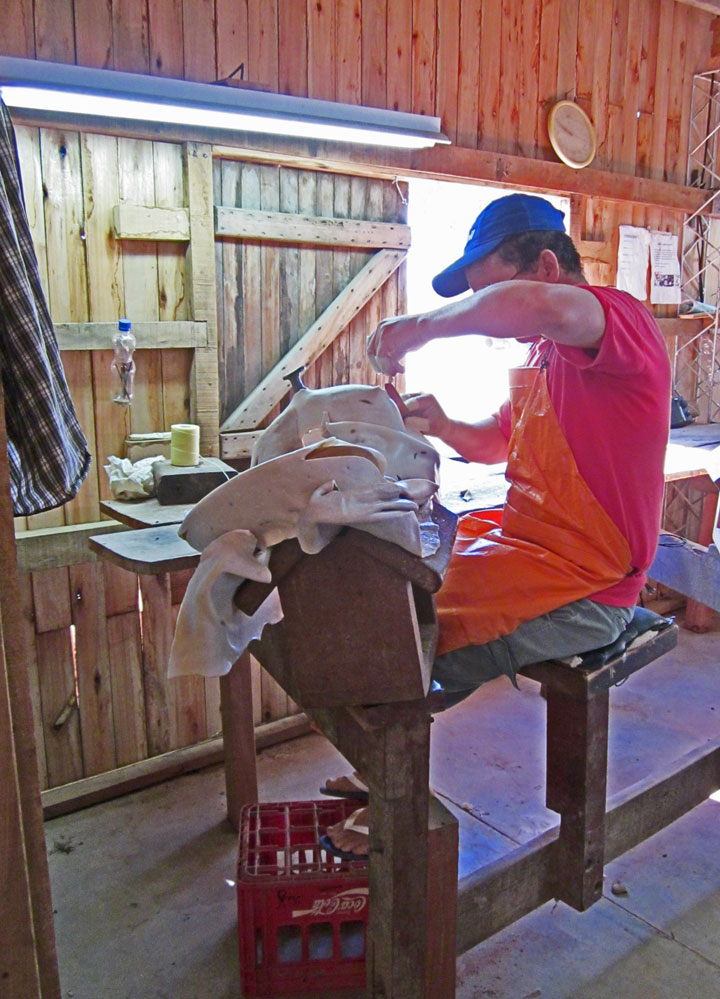 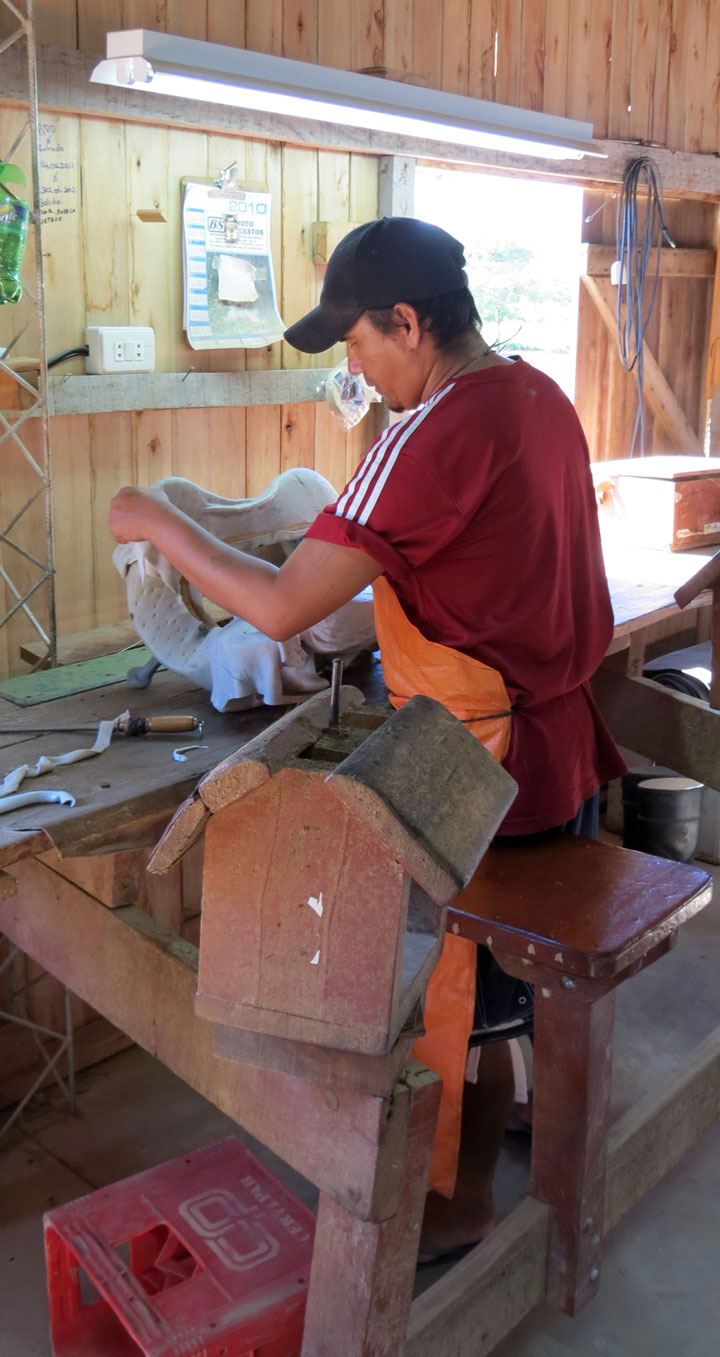 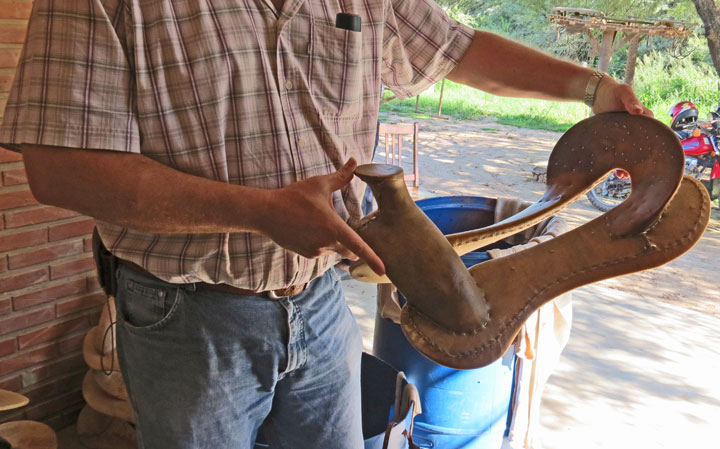 The tree is usually covered with leather on all visible parts of the saddle. The seat may have foam rubber or other materials added between the tree and the top layer of leather to provide additional comfort to the rider, and leather or foam padding may be used to slightly alter the contours of the seat. Sheepskin is placed on the underside of the saddle, covering both the tree and the underside of the skirts. The cinch rings, made of metal, are attached to the tree as described under "Rigging," below. For decoration, metal conchos, lacing, and small plates, usually silver or a silver-like substitute, are added. 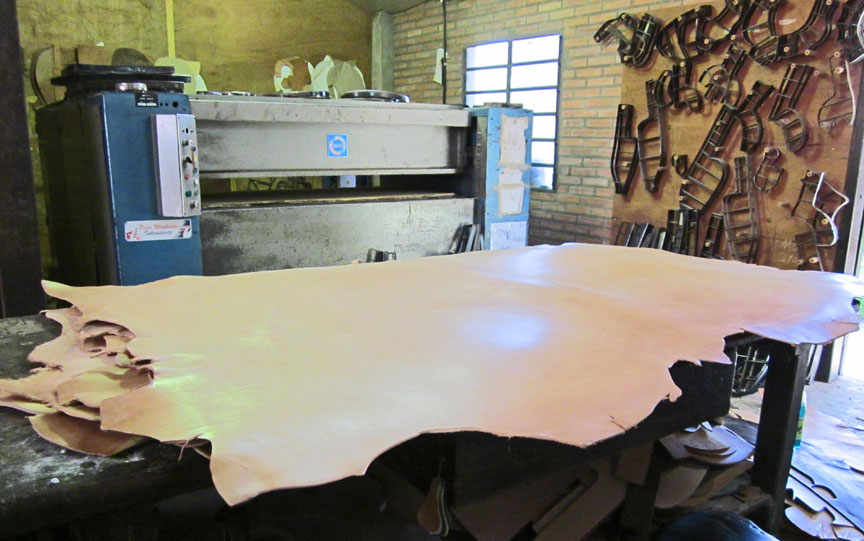 The leather parts of the saddle are often tooled into designs that range from simple to complex. The finest-quality saddles often have hand-carved tooling that itself is considered a work of art. 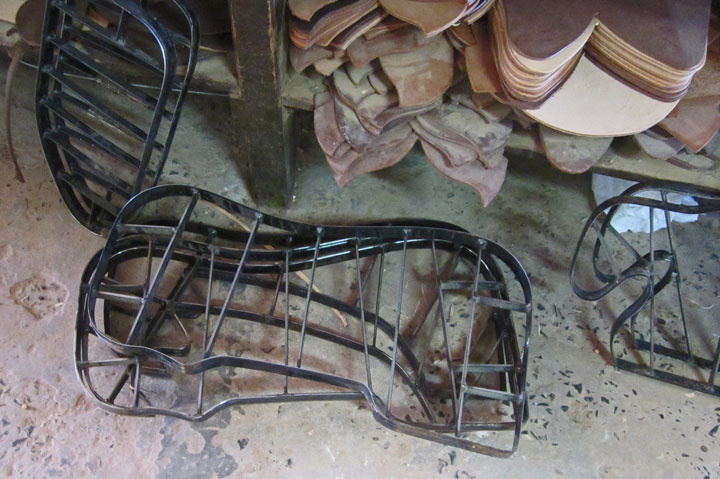 patterns for the leather parts 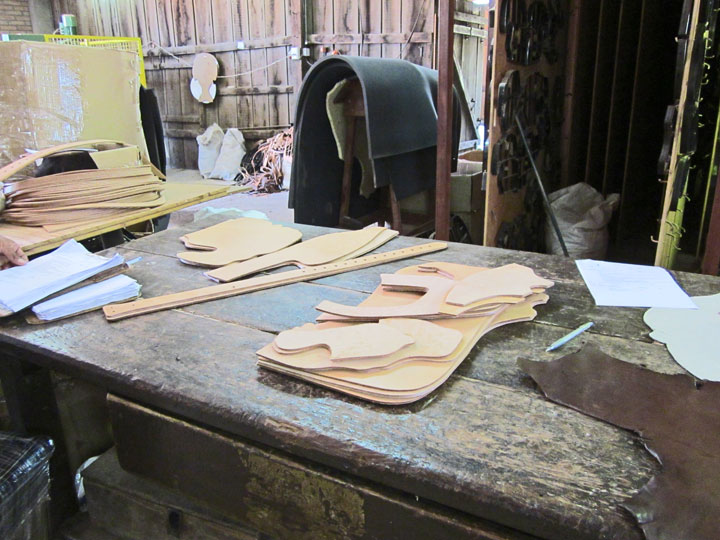 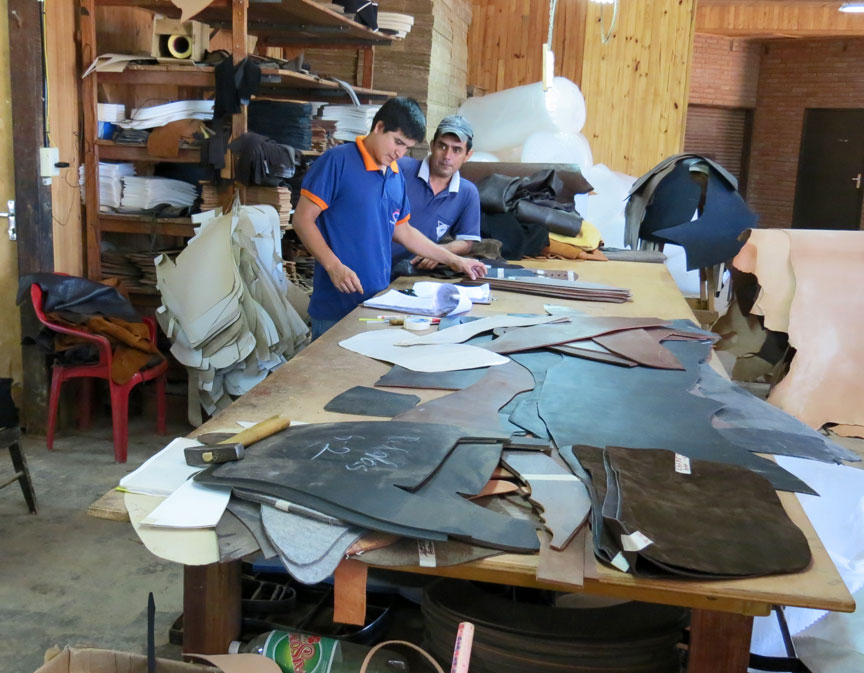 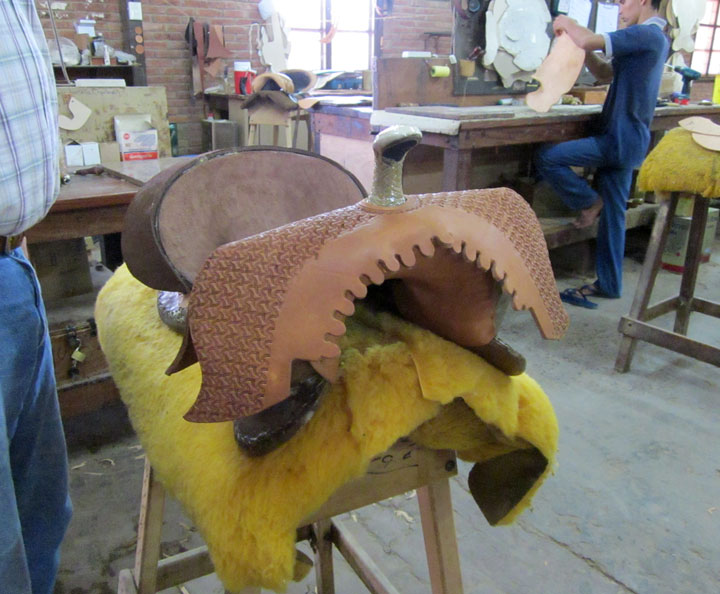 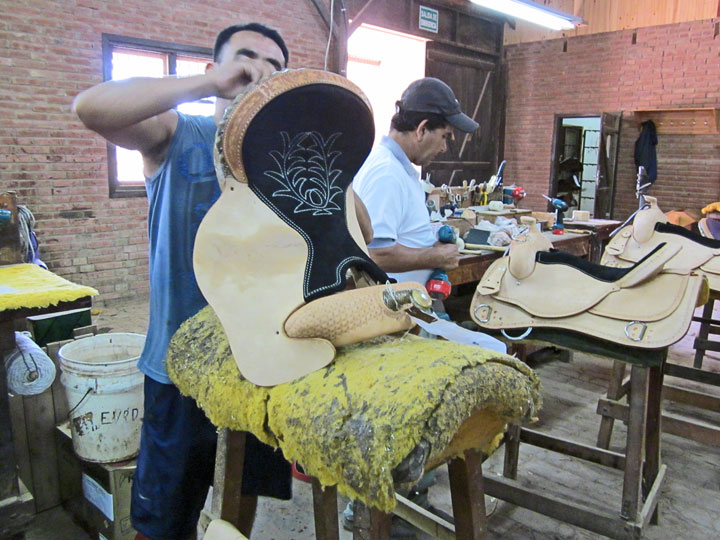 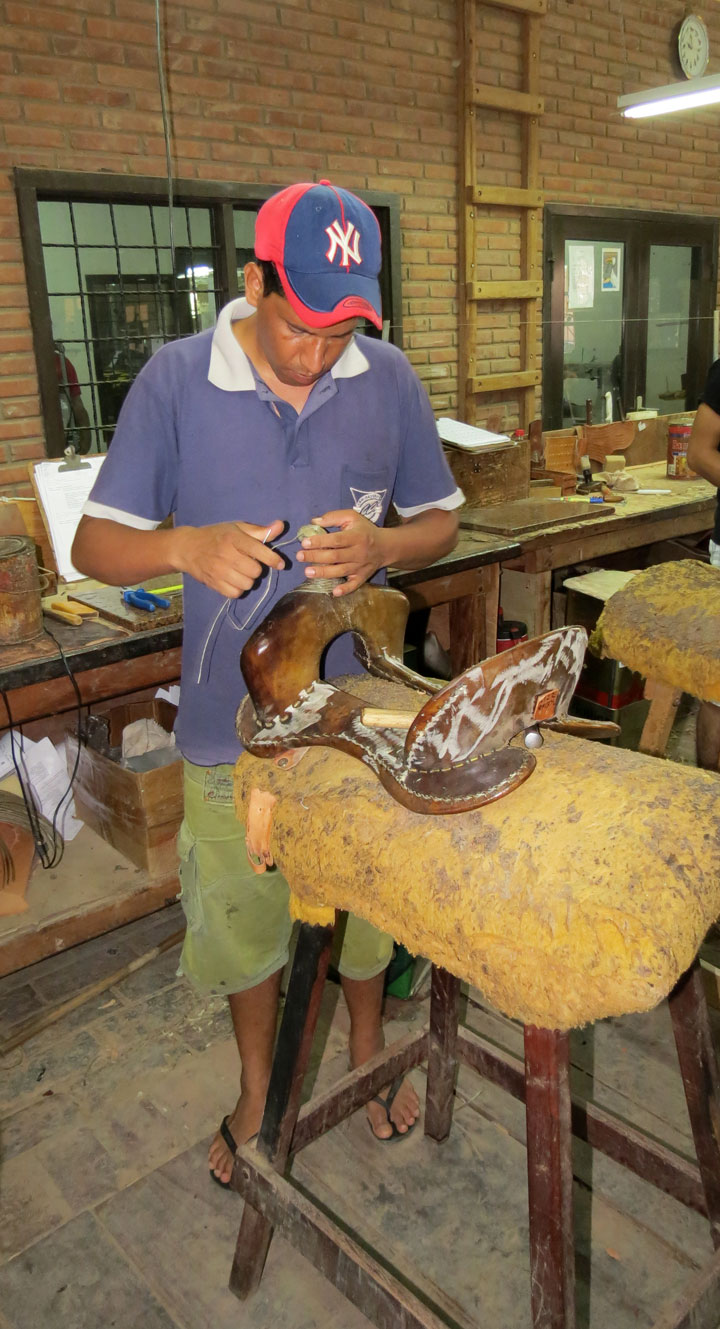 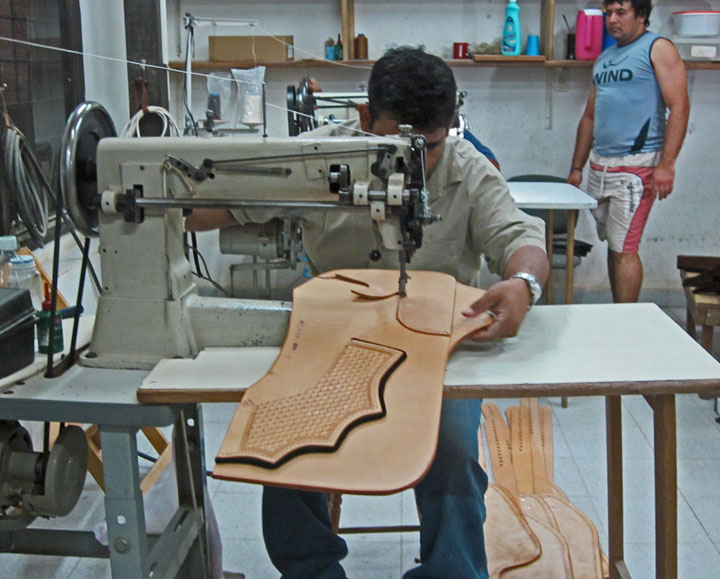 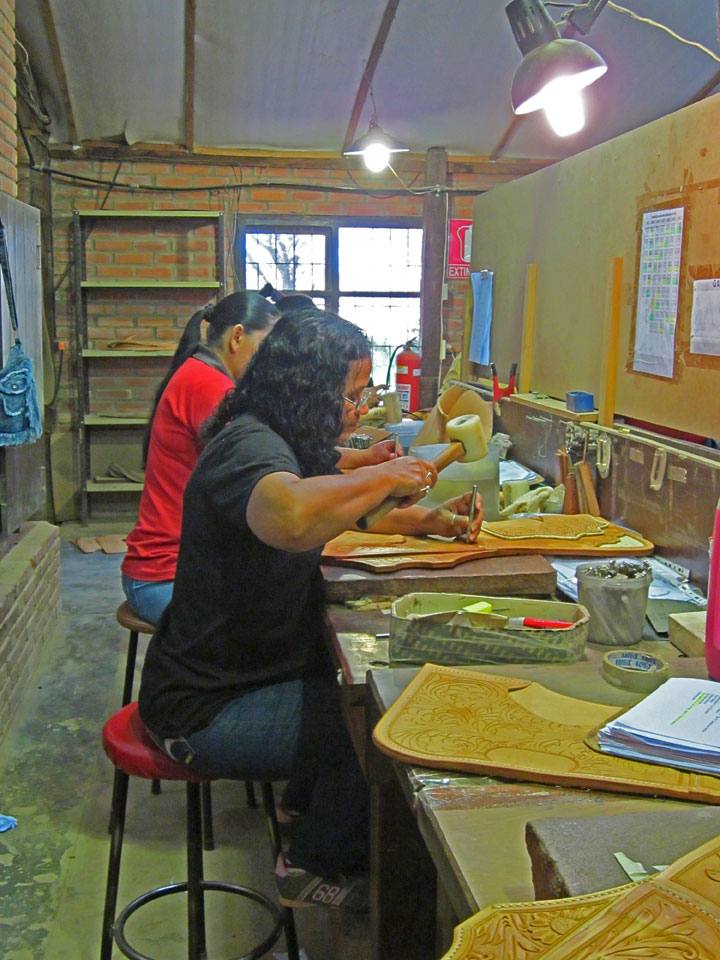 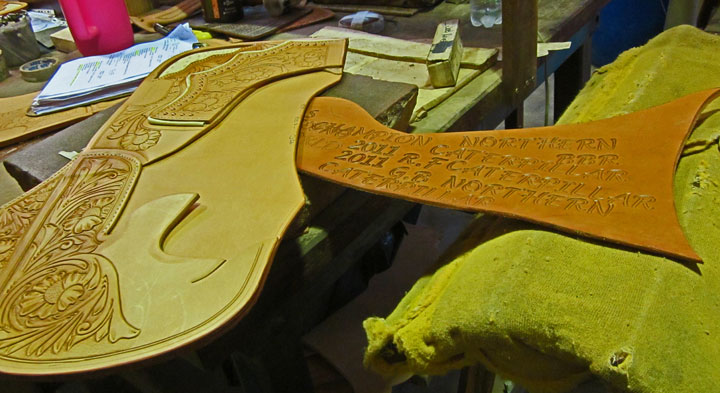 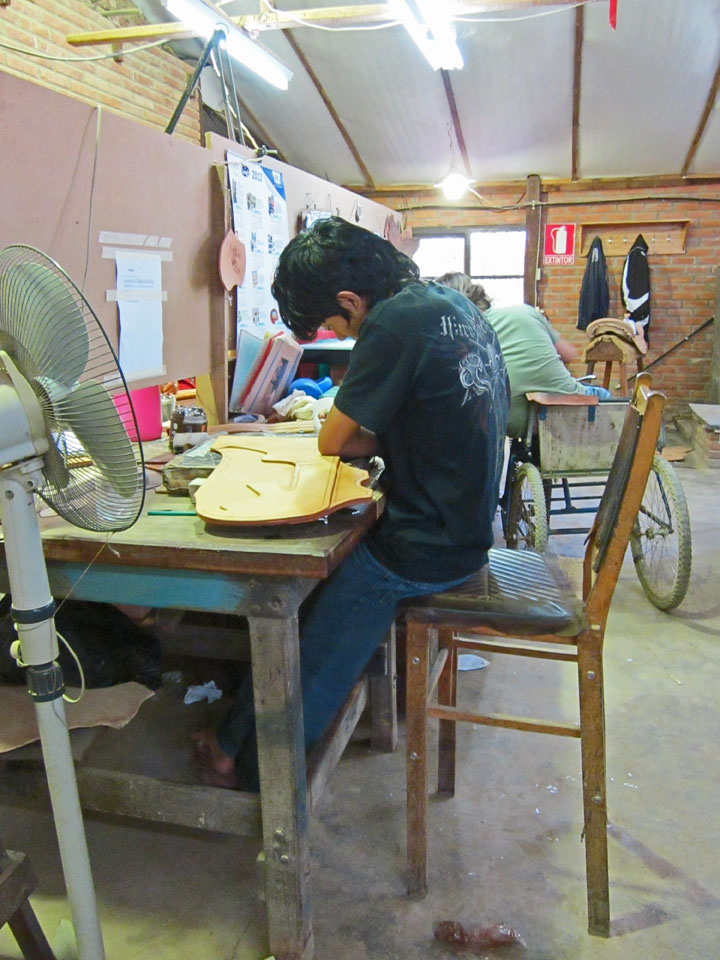 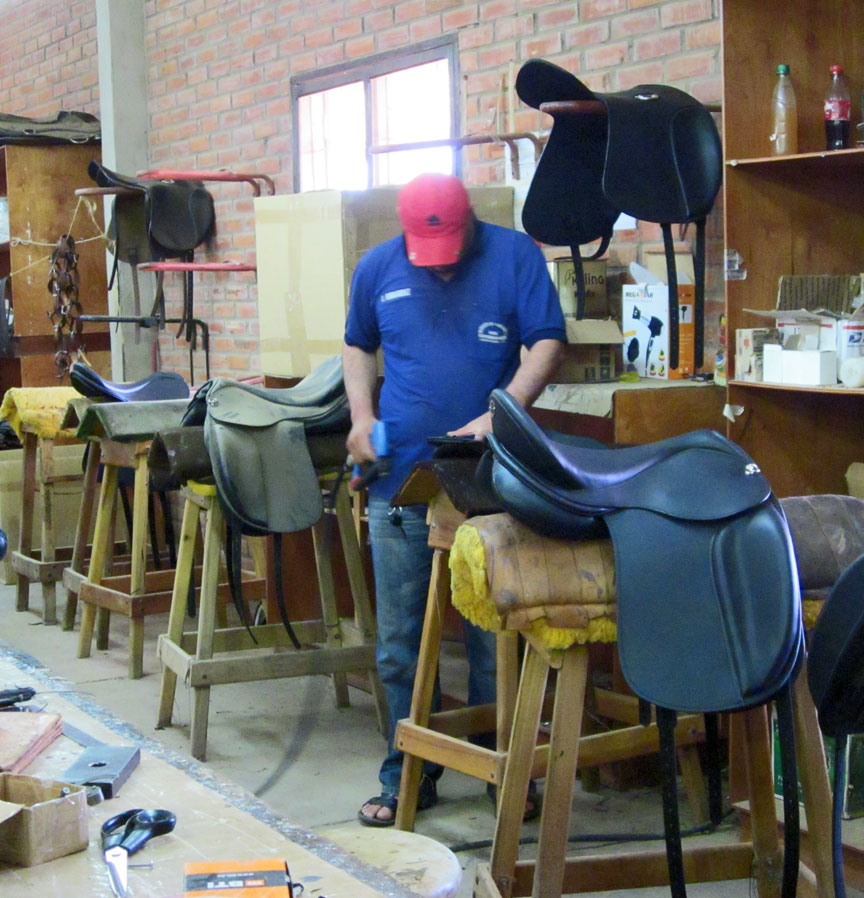 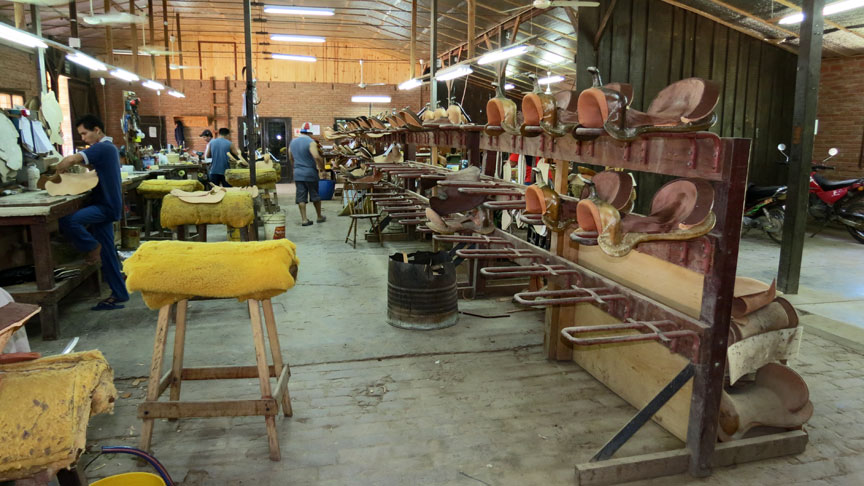 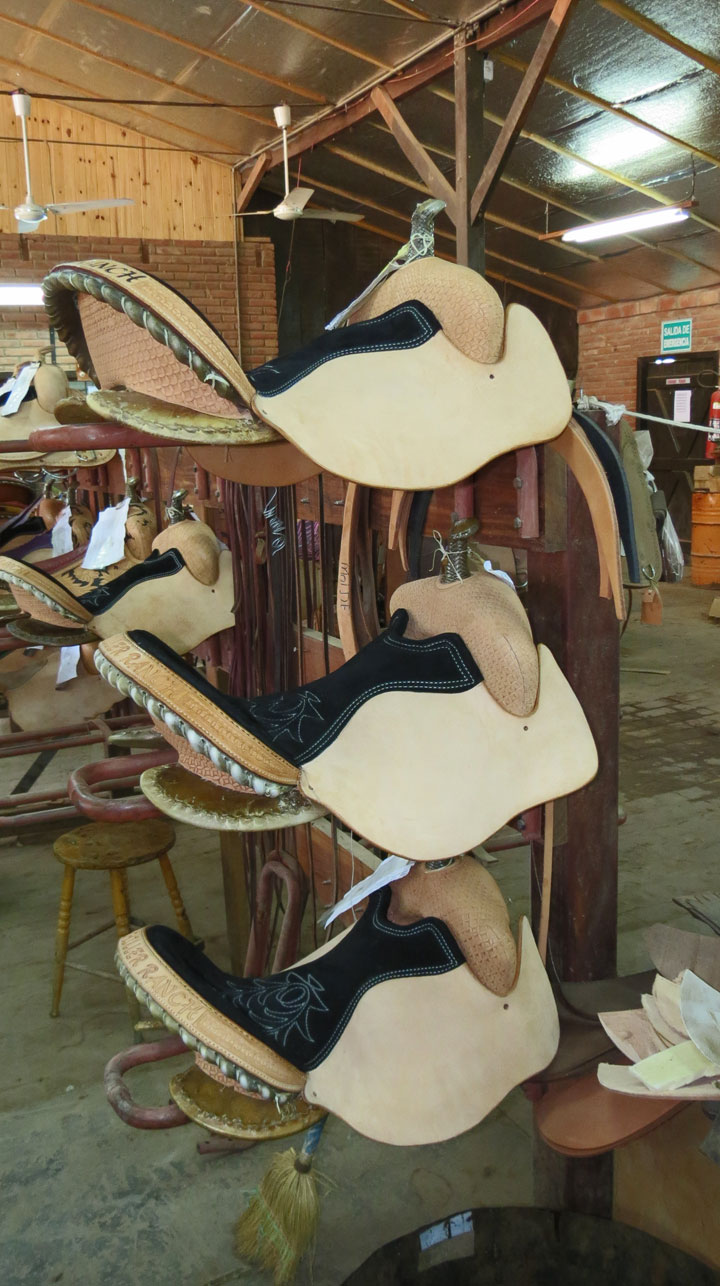 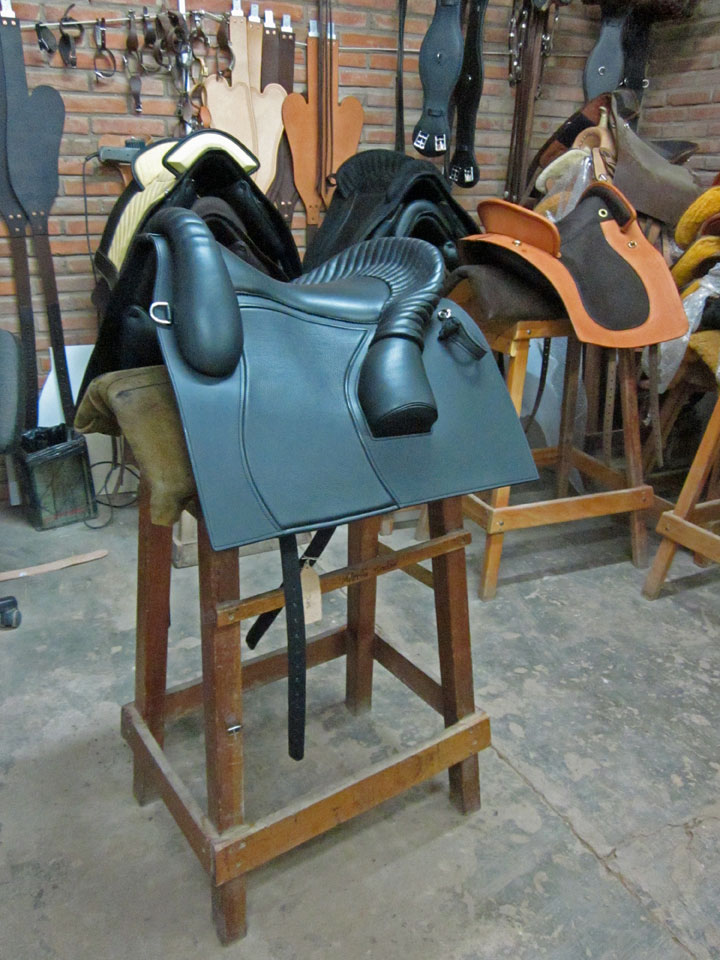 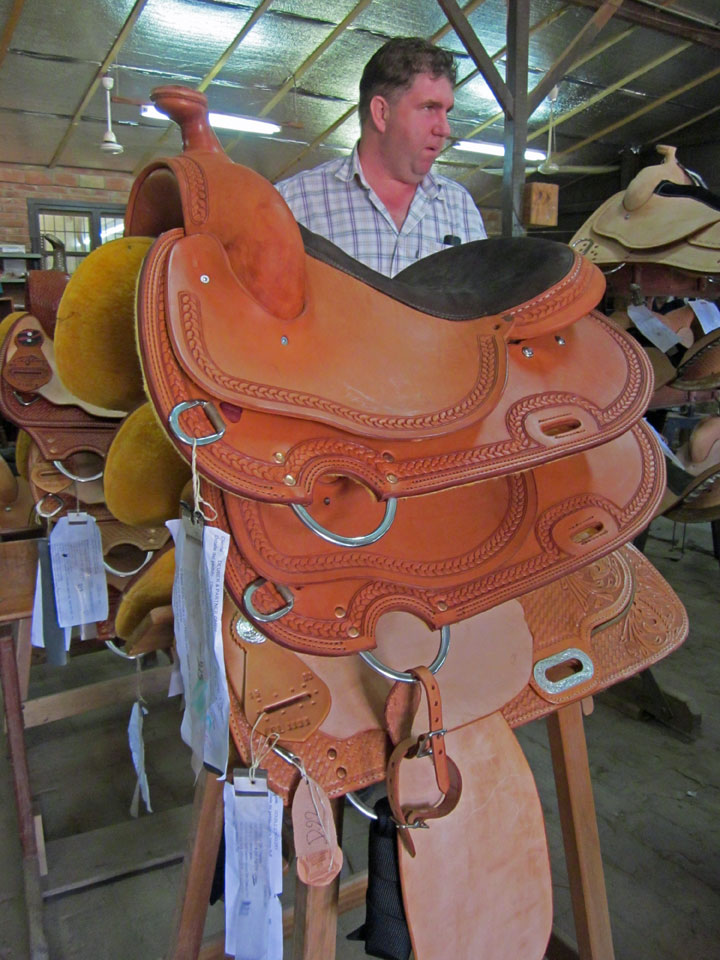 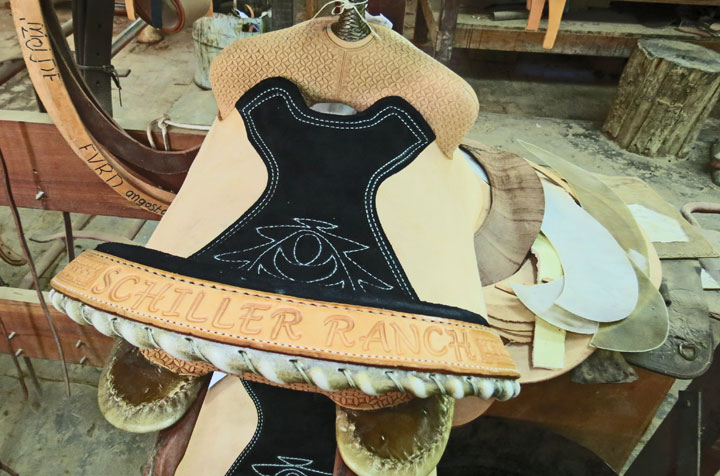 special for the ranch 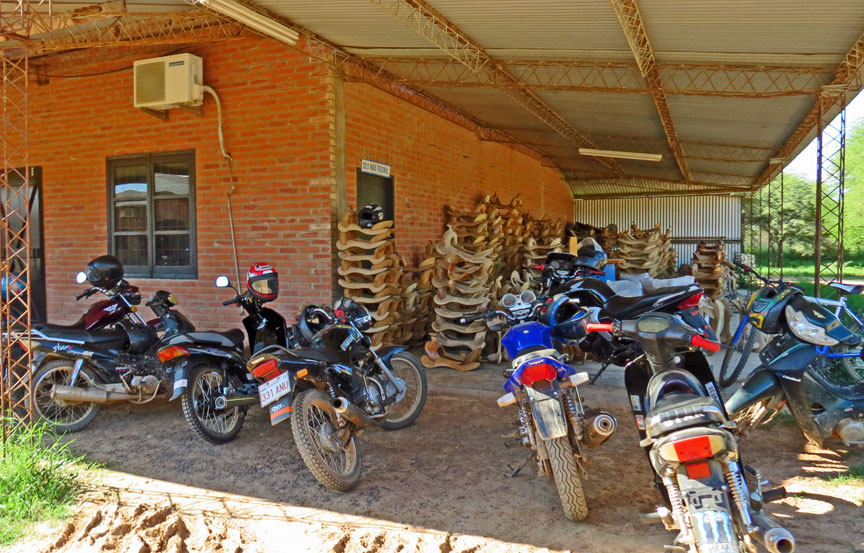 bikes of the workers