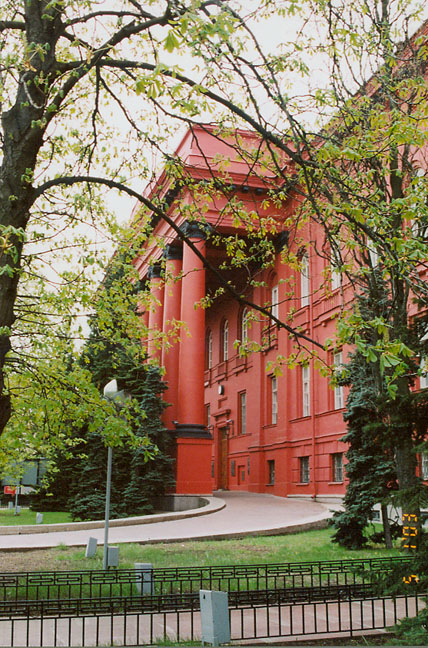 Kyiv or Kiev, city, north central Ukraine, capital of Ukraine, and of Kyiv Oblast, on the Dnieper River. The largest city of Ukraine, it is a major industrial, transportation, and cultural center. Among its leading manufactures are machinery, machine tools, chemicals, motor vehicles, processed food, textiles, clothing, forest products, and printed materials. The city also serves as the market for an agricultural region producing grain, fruit, sugar beets, and other commodities. 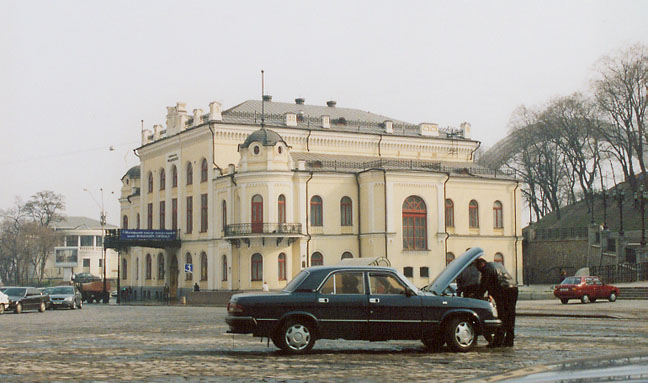 A beautiful city with many parks and historical structures, Kyiv is built mostly on hills overlooking the Dnieper. The old section of the city, on the right bank of the river, includes hills surmounted by churches and the ruins of ancient castles and fortifications. The newer quarters, on the left bank, were mostly built after World War II ended in 1945. The city is served by a subway system. 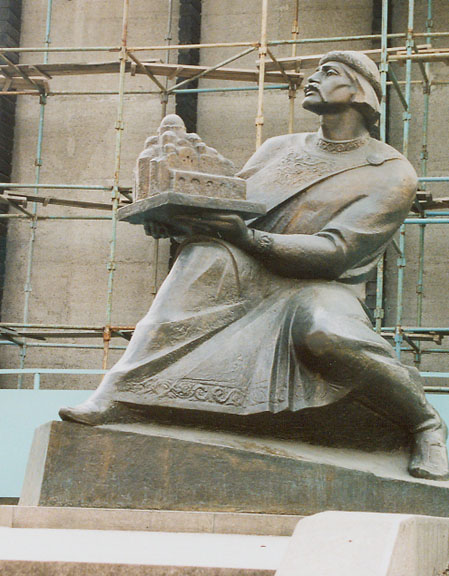 Yaroslav, one of the greatest Kyiv princes
during his reign Saint Sophia Cathedral and the Golden gates were constructed

Kyiv was one of the foremost religious centers of medieval Europe, and several noteworthy church buildings survive. The most famous of these is the Cathedral of Saint Sophia (also known as the Hagia Sophia of Kyiv; founded early 11th century, largely rebuilt 17th-18th century); the oldest cathedral in Ukraine, it is noted for its frescoes and mosaics. 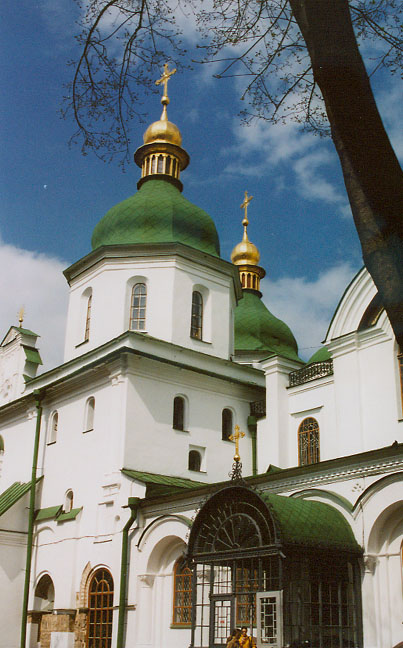 The large Perchersky, or Cave, Monastery (founded early 11th century), known for its catacombs, is one of the most sacred edifices of the Ukrainian Orthodox Church. 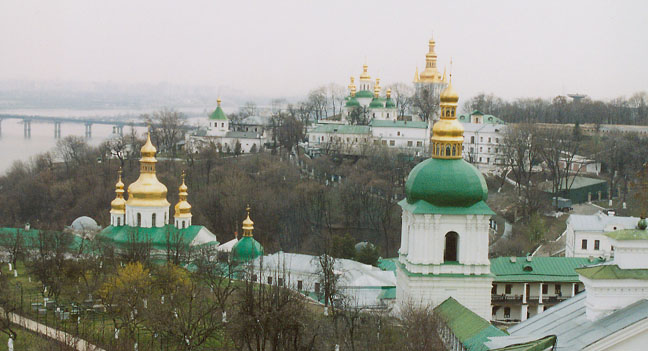 Other striking religious structures in the city include the baroque-style 18th-century Church of Saint Andrew and the late 19th-century Cathedral of Saint Vladimir. 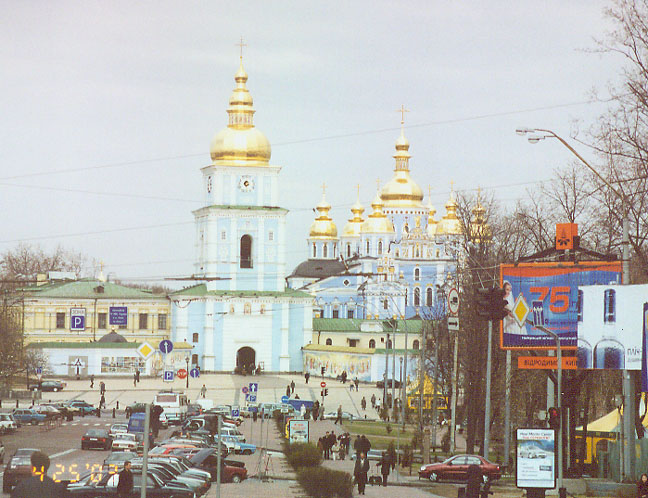 Also of interest are the ruins of the 11th-century Golden Gate, once the main entrance to the city. Kyiv is the site of several universities, most notably the University of Kyiv (founded in 1834). 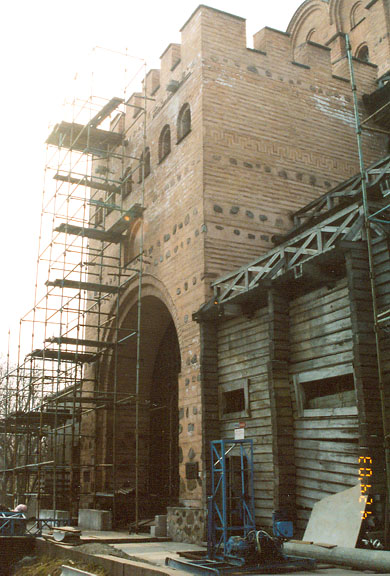 (But further investigation indicates that the Golden Gate is not the "Great Gate of Kiev" of "Pictures at an exhibition"
That gate only exists as a drawing made by Viktor Hartmann, which was displayed at a posthumous exhibition of his works, and was a design for an intended commemorative building to celebrate the Tsar's escaping an intended assassination.
Source " Grove Concise Dictionary of Music")

The Ukrainian Academy of Sciences and its Central Library, Ukraine's largest library, are located in Kyiv. Museums in Kyiv include the Historical Museum of Ukraine (1899) and the Museum of Ukrainian Art (1936). Other attractions include a music conservatory, an opera house, and a large sports stadium. 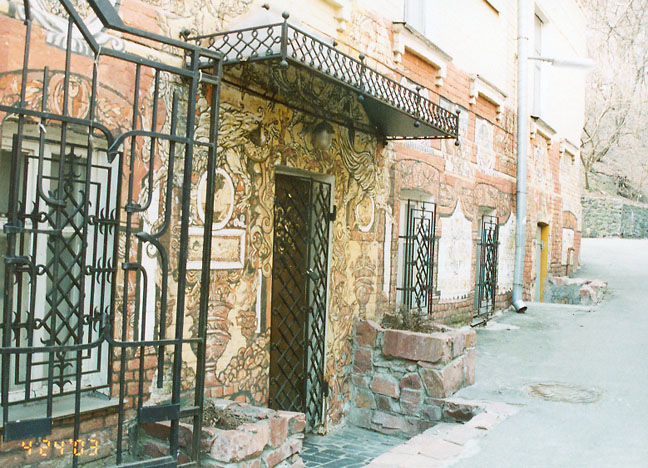 First settled in prehistoric times, Kyiv became an East Slavic settlement during the 6th and 7th centuries. It soon developed into an important commercial center located on a major trade route. In 860 the city was taken over by Varangians (Vikings), who made it the center of the first significant East Slavic state, called Kievan Rus. 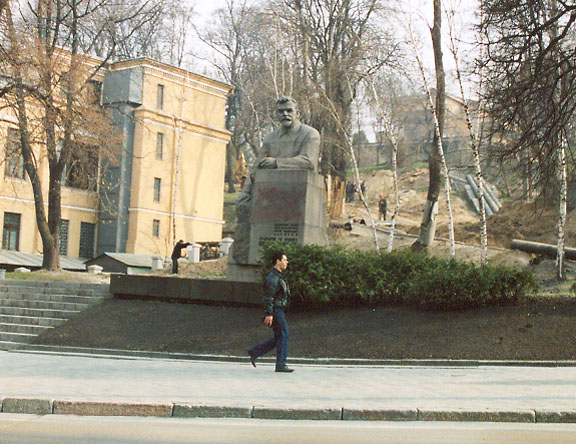 In 988, during the reign of Volodymyr I (Vladimir I; also known as Saint Vladimir), the inhabitants of Kyiv adopted the Greek Orthodox faith, and the city became the leading religious center in Kievan Rus. 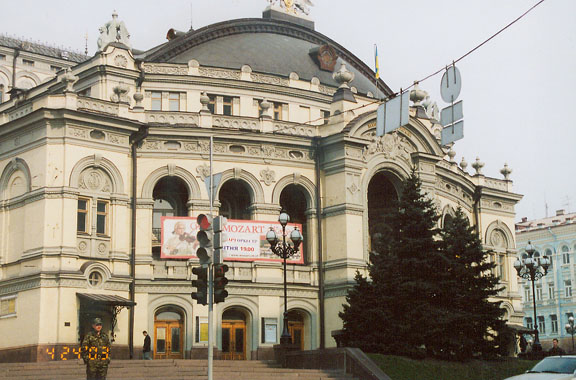 Its exposed position near the southern frontier made Kyiv a constant prey to attack. The armies of the Mongol leader Batu Khan sacked and destroyed it in 1240, and the city remained under Mongol domination until the 1360s, when it came under Lithuanian rule. In 1482 the city was invaded by Crimean Tatars, and in 1569 it was incorporated into Poland. In 1686 Kyiv was annexed by the Russian Empire. 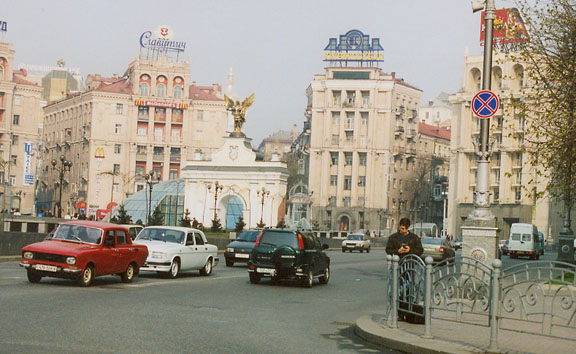 In the 18th century Kyiv was heavily fortified, and in the 19th century it grew as a trade and industrial center. Kyiv was held by German troops during World War I (1914-1918), and it was the scene of much fighting following the Russian Revolution of 1917. In 1934 the city replaced Kharkiv as the capital of Ukraine, which was then part of the Union of Soviet Socialist Republics (USSR). 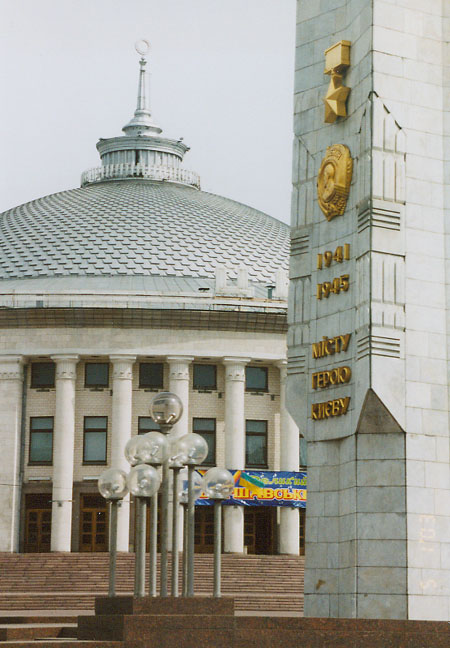 More Photos from along Tarasa Shevchenka

During World War II Kyiv was occupied by German Nazi forces from 1941 to 1943 and suffered great damage; as many as 200,000 of its inhabitants were killed. After the war the city was reconstructed and resumed its place as one of the chief Soviet economic and cultural centers. Following the dissolution of the USSR in 1991, Kyiv became the capital of independent Ukraine. Population (1998 estimate) 2,600,000. 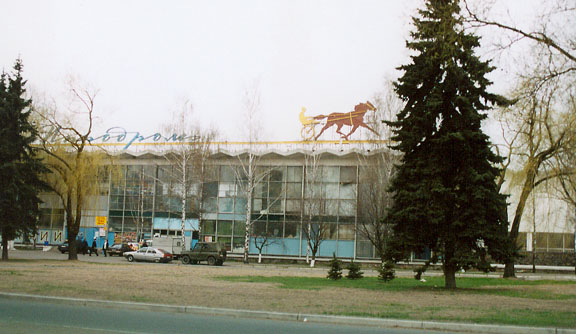 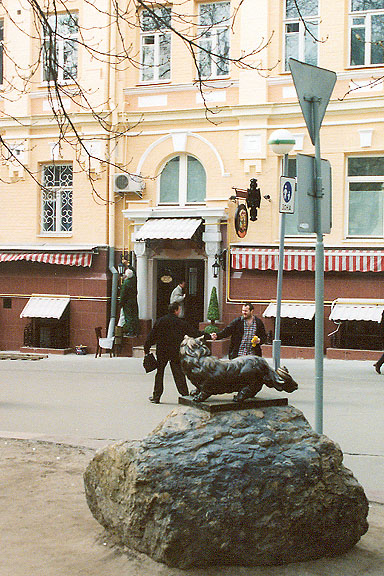 statue of a famous cat
(saved the owner of the restaurant in the background, from dying in a fire) 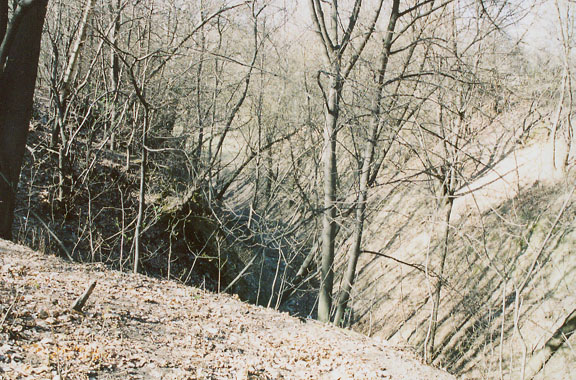 On September, 29 - 31, 1941, Nazi troops rounded up Kyiv's Jewish population
and marched them to the Babyn Yar ravine, where an estimated 34,000 Jews were massacred in 48 hours. 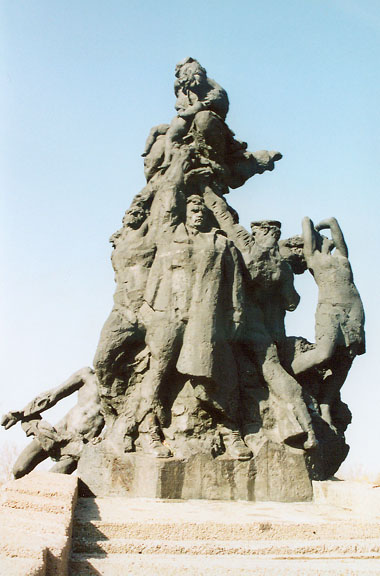 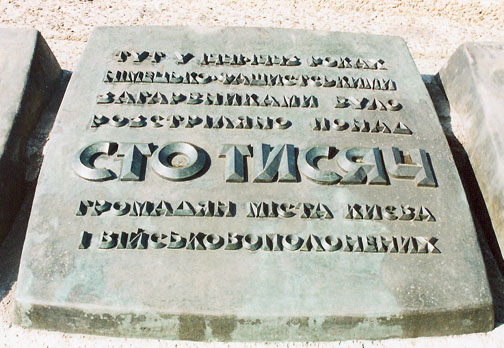 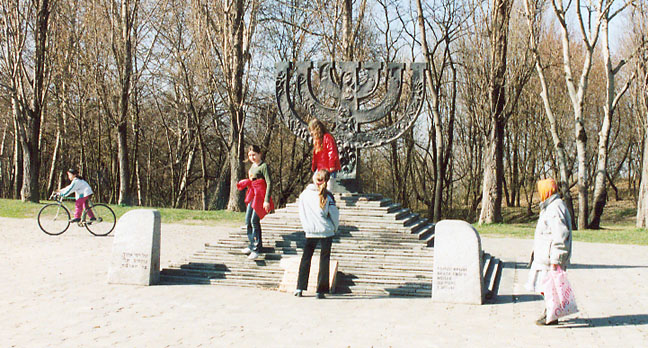 Special monument to the Jewish victims erected in 1991 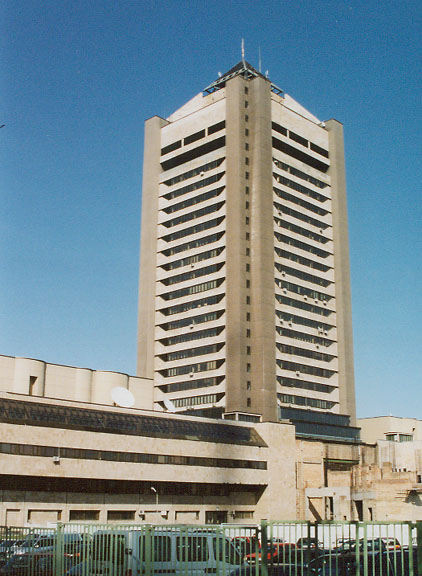 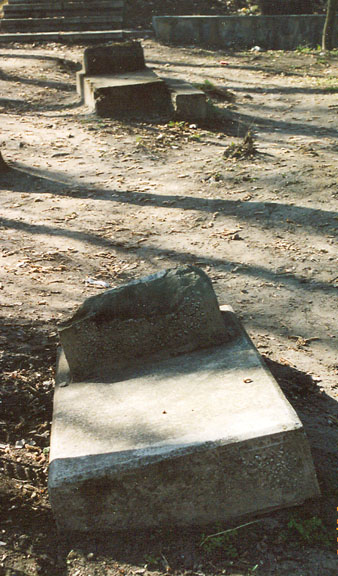 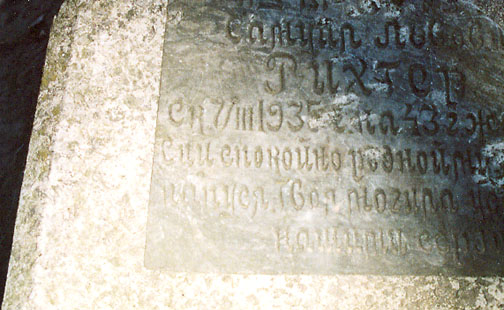