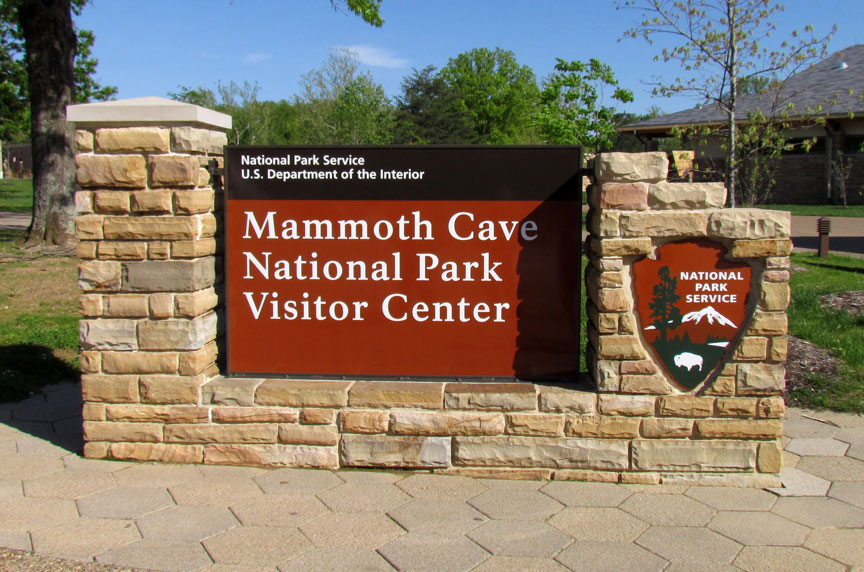 Mammoth Cave National Park is a U.S. National Park in central Kentucky, encompassing portions of Mammoth Cave, the longest cave system known in the world. The official name of the system is the Mammoth-Flint Ridge Cave System for the ridge under which the cave has formed. The park was established as a national park on July 1, 1941. It became a World Heritage Site on October 27, 1981, and an international Biosphere Reserve on September 26, 1990. 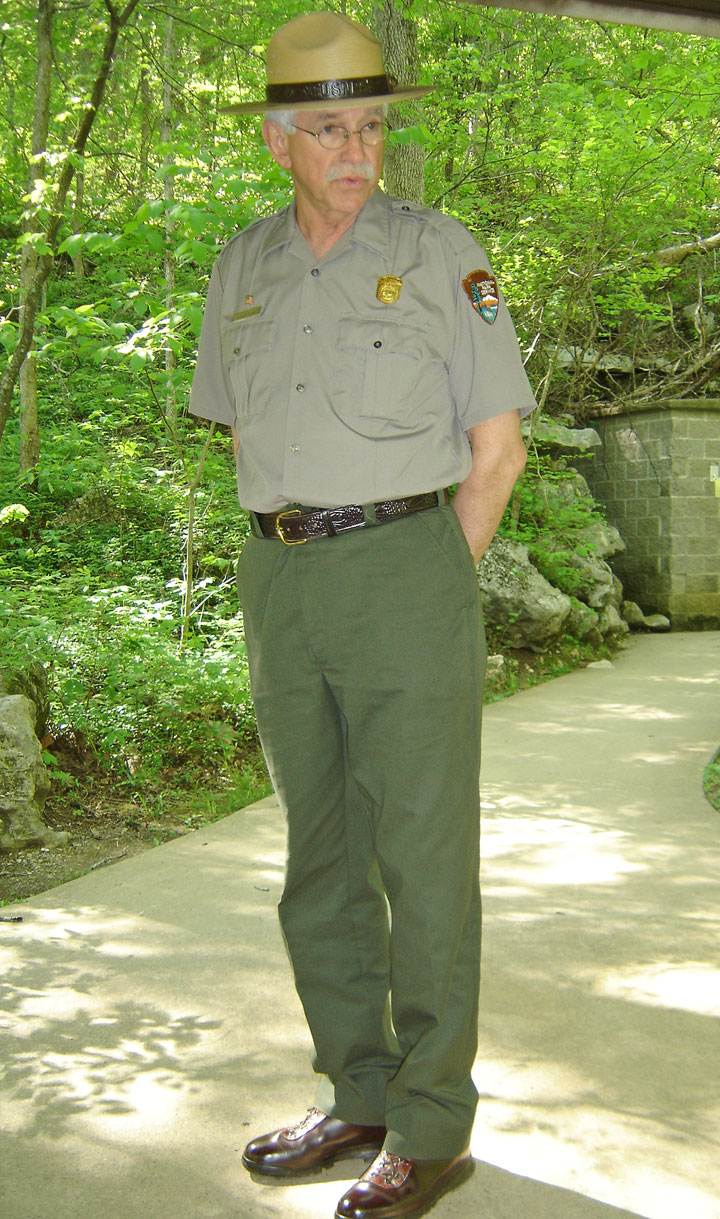 The park's 52,835 acres (21,382 ha) are located primarily in Edmonson County, Kentucky, with small areas extending eastward into Hart County and Barren County. It is centered around the Green River, with a tributary, the Nolin River, feeding into the Green just inside the park. With over 390 miles (630 km) of passageways it is by far the world's longest known cave system, being well over twice as long as the second longest cave system, which is South Dakota's Jewel Cave with just over 150 miles (240 km) of known passageways. 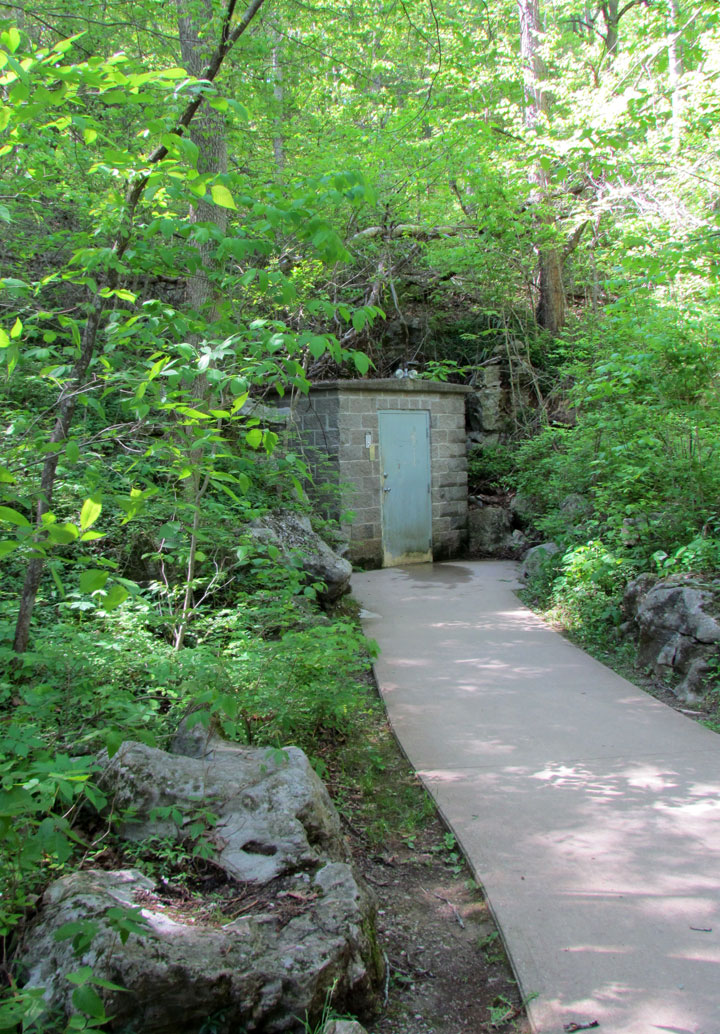 entrance used for the most popular tour

Mammoth Cave developed in thick Mississippian-aged limestone strata capped by a layer of sandstone, making the system remarkably stable. It is known to include more than 390 miles (630 km) of passageway; new discoveries and connections add several miles to this figure each year. Mammoth Cave National Park was established to preserve the cave system. 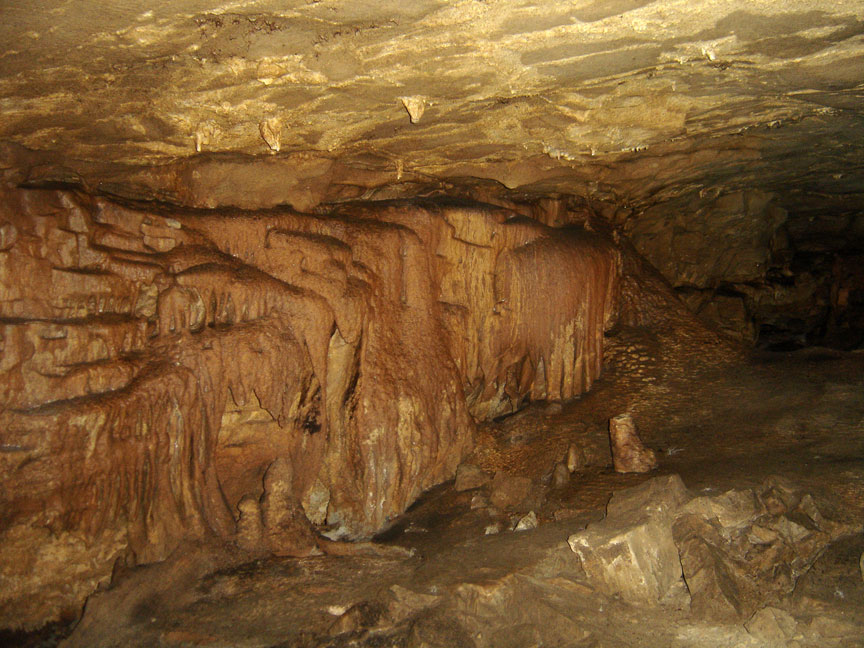 The upper sandstone member is known as the Big Clifty Sandstone: thin, sparse layers of limestone interspersed within the sandstones give rise to an epikarstic zone, in which tiny conduits (cave passages too small to enter) are dissolved by the natural acidity of groundwater. The epikarstic zone concentrates local flows of runoff into high-elevation springs which emerge at the edges of ridges. The resurgent water from these springs typically flows briefly on the surface before sinking underground again at elevation of the contact between the sandstone caprock and the underlying massive limestone. It is in these underlying massive limestone layers that the human-explorable caves of the region have naturally developed. 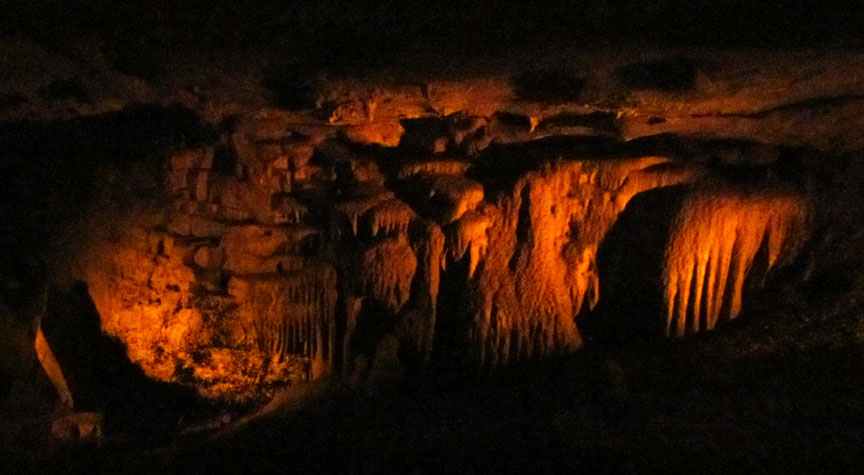 The limestone layers of the stratigraphic column beneath the Big Clifty, in increasing order of depth below the ridgetops, are the Girkin Formation, the St. Genevieve Limestone, and the St. Louis Limestone. For example, the large Main Cave passage seen on the Historic Tour is located at the bottom of the Girkin and the top of the St. Genevieve Formation. 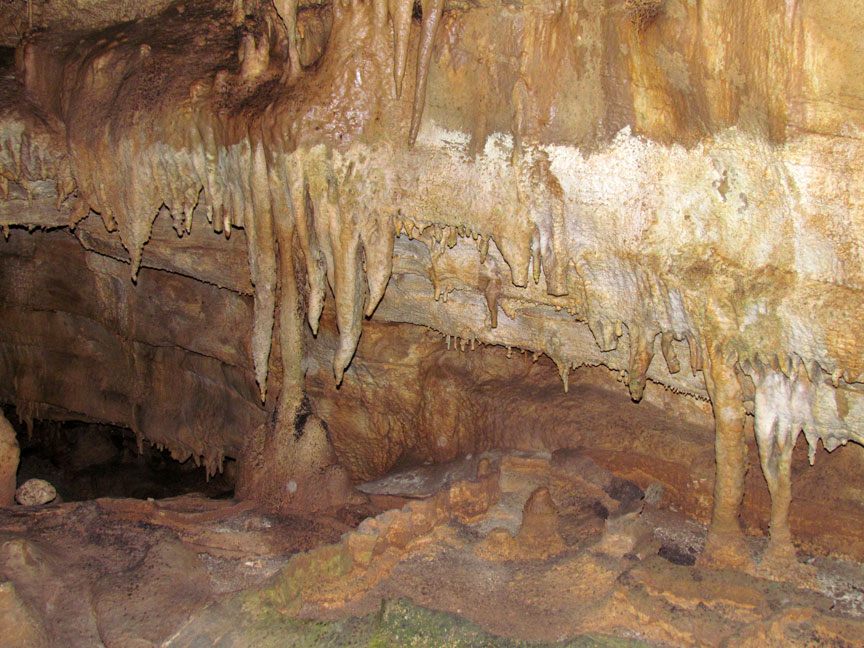 Each of the primary layers of limestone are divided further into named geological units and subunits. One area of cave research involves correlating the stratigraphy with the cave survey produced by explorers. This makes it possible to produce approximate three-dimensional maps of the contours of the various layer boundaries without the necessity for test wells and extracting core samples. 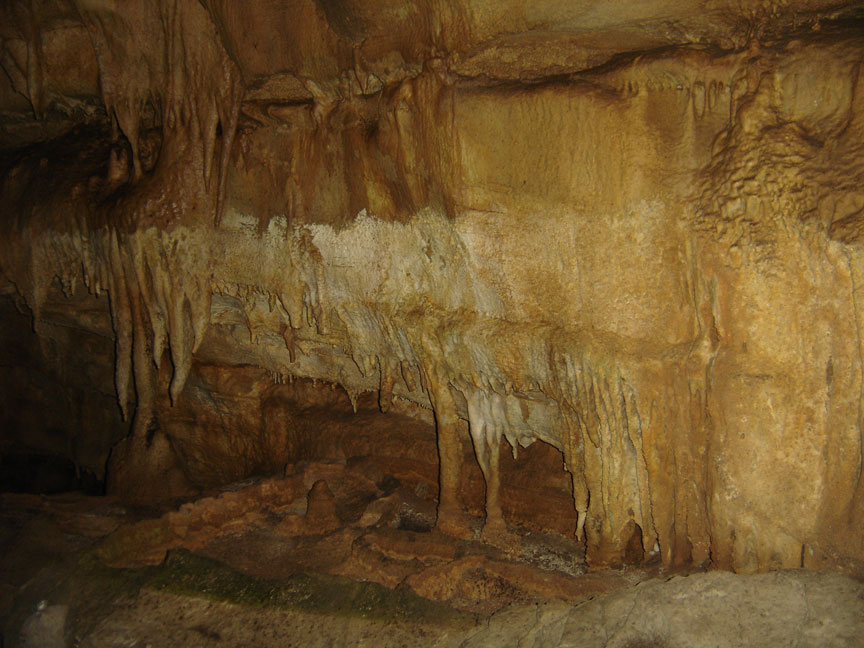 The upper sandstone caprock is relatively hard for water to penetrate: the exceptions are where vertical cracks occur. This protective role means that many of the older, upper passages of the cave system are very dry, with no stalactites, stalagmites, or other formations which require flowing or dripping water to develop. 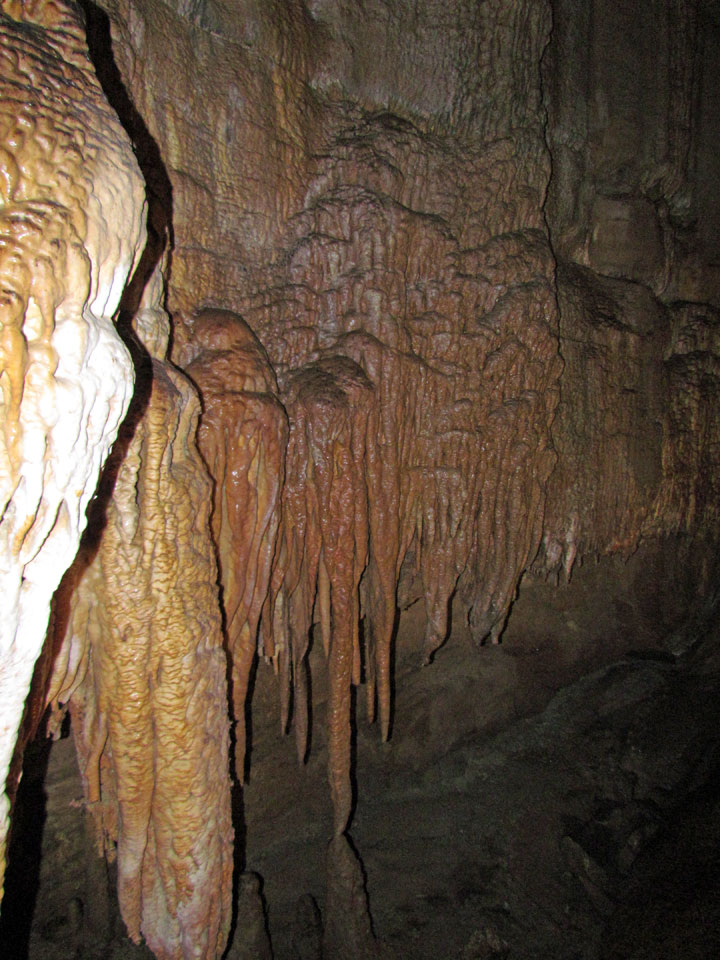 However, the sandstone caprock layer has been dissolved and eroded at many locations within the park, such as the Frozen Niagara room. The "contact" between limestone and sandstone can be found by hiking from the valley bottoms to the ridgetops: typically, as one approaches the top of a ridge, one sees the outcrops of exposed rock change in composition from limestone to sandstone at a well-defined elevation. 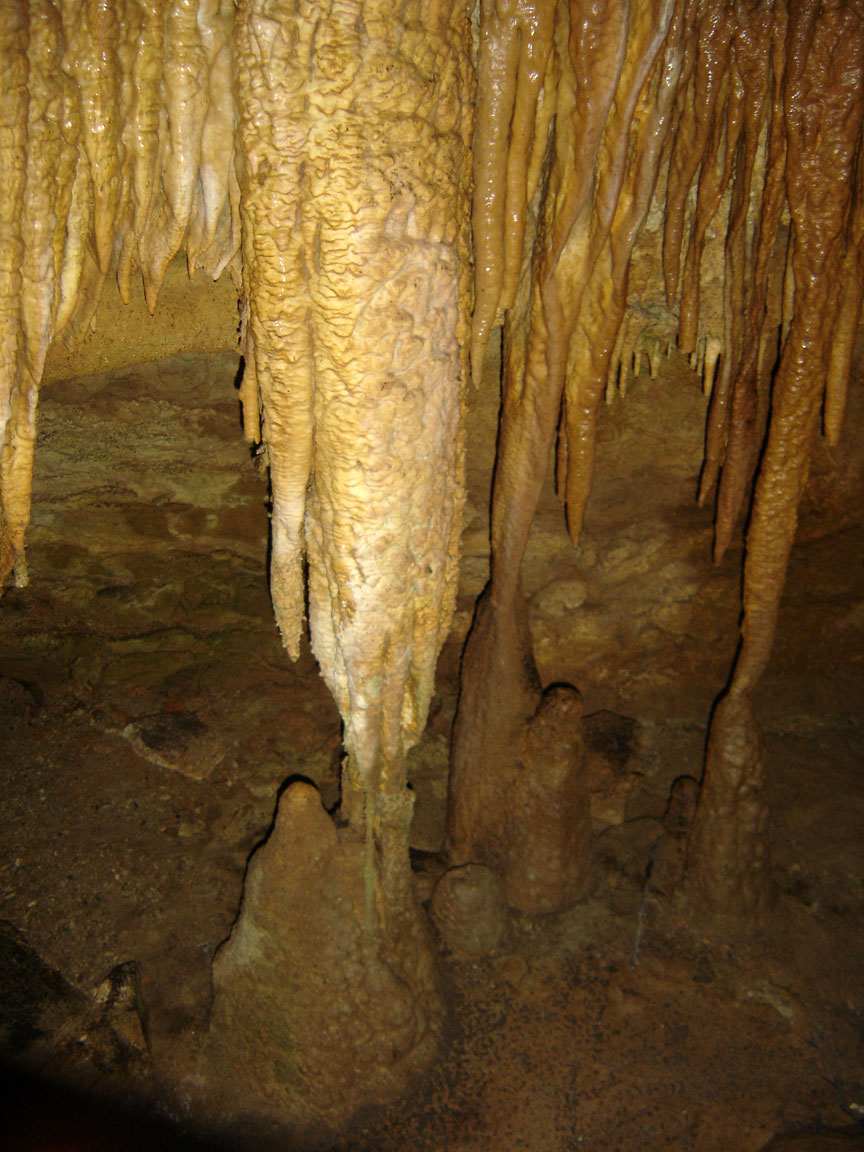 At one valley bottom in the southern region of the park, a massive sinkhole has developed. Known as "Cedar Sink," the sinkhole features a small river entering one side and disappearing back underground at the other side. 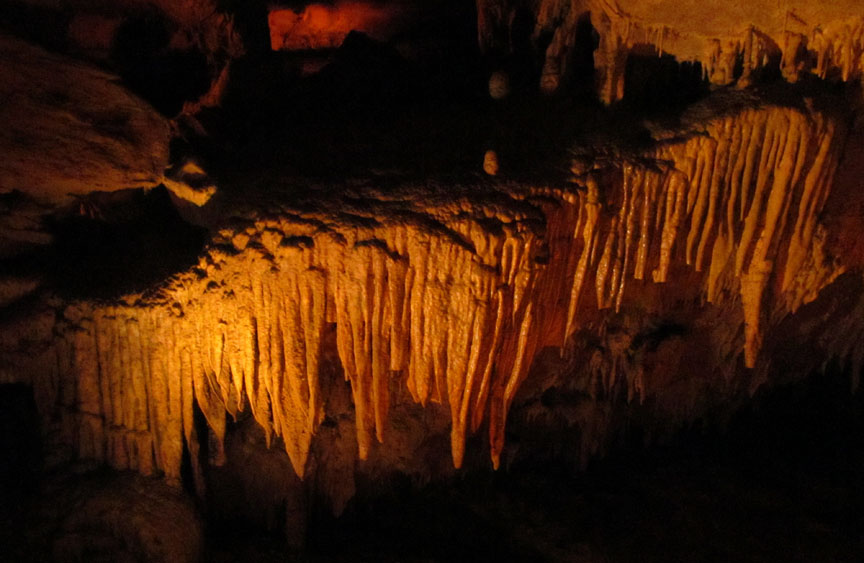 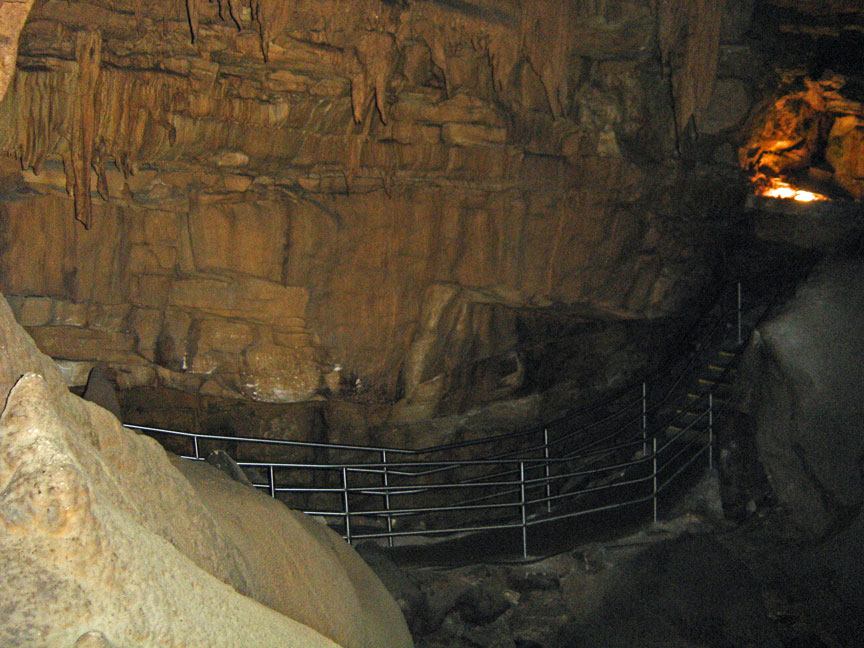 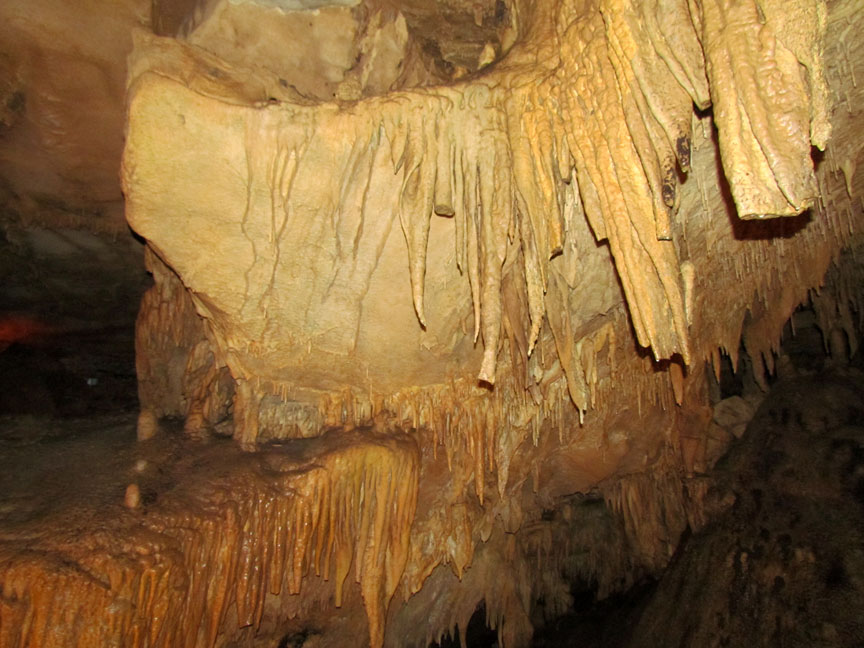 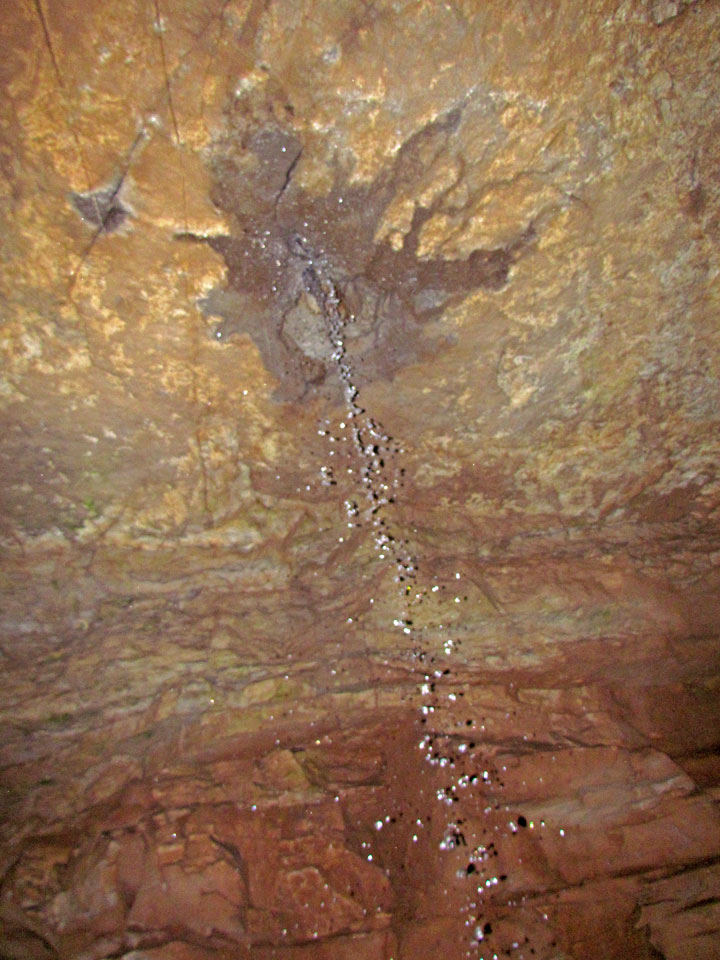 water entering from a higher level 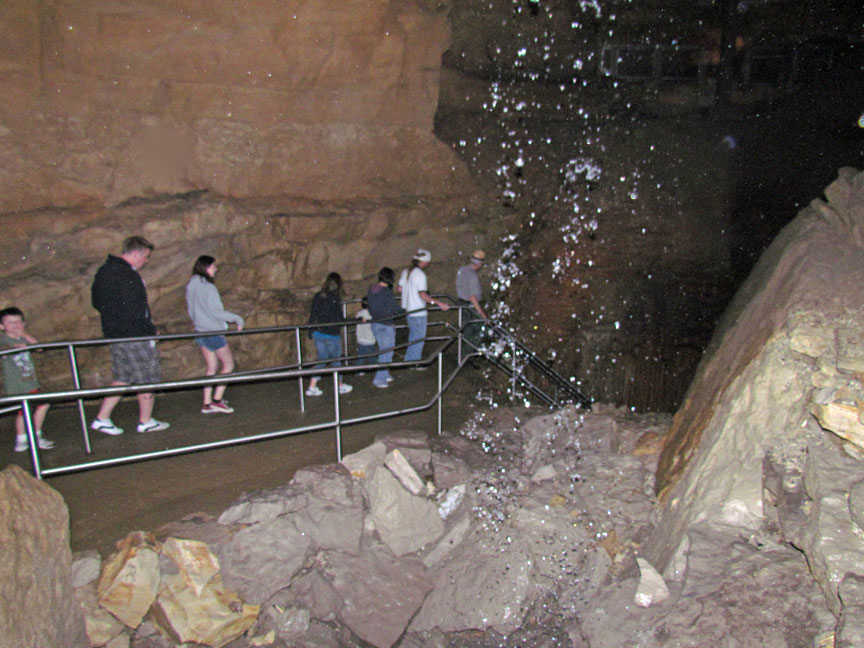 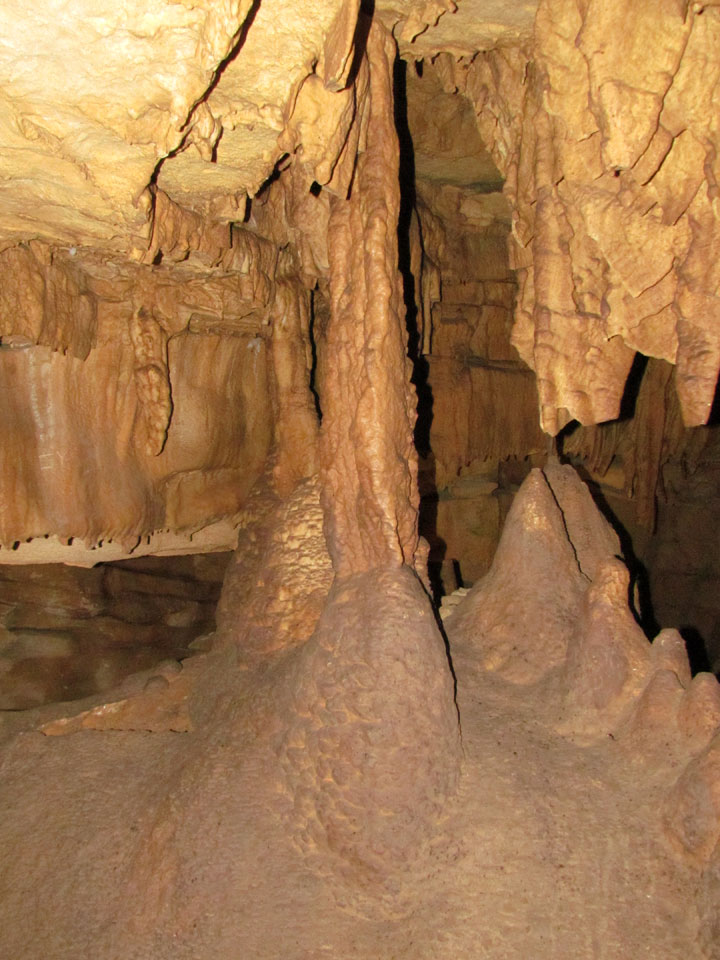 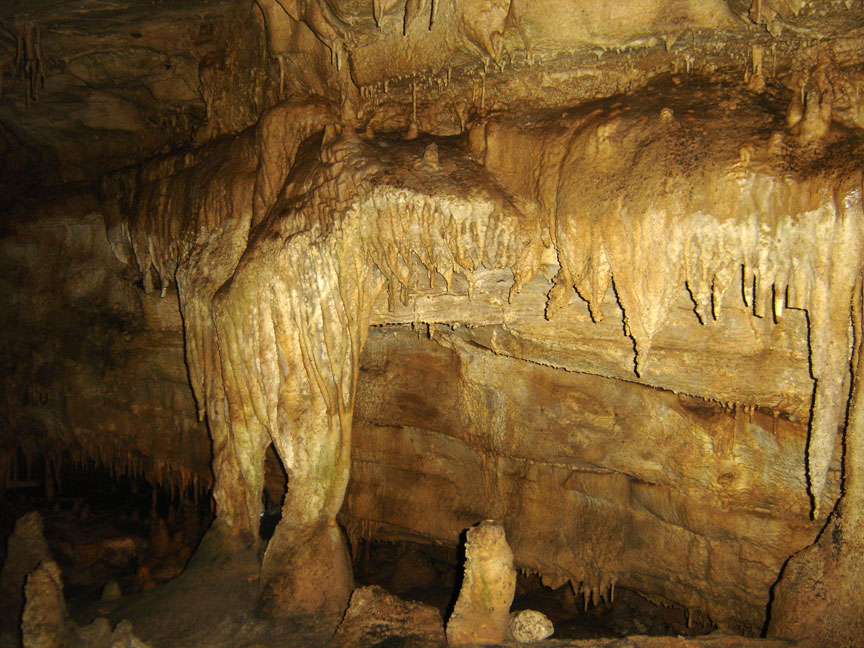 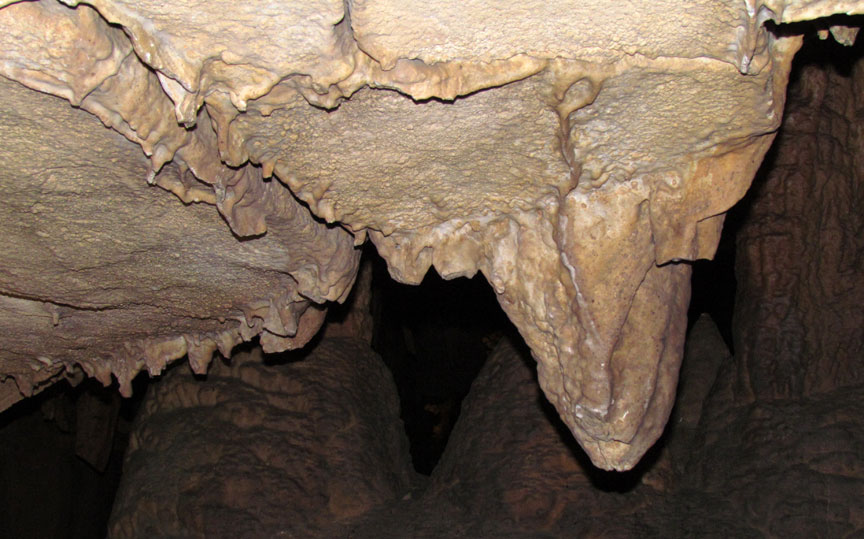 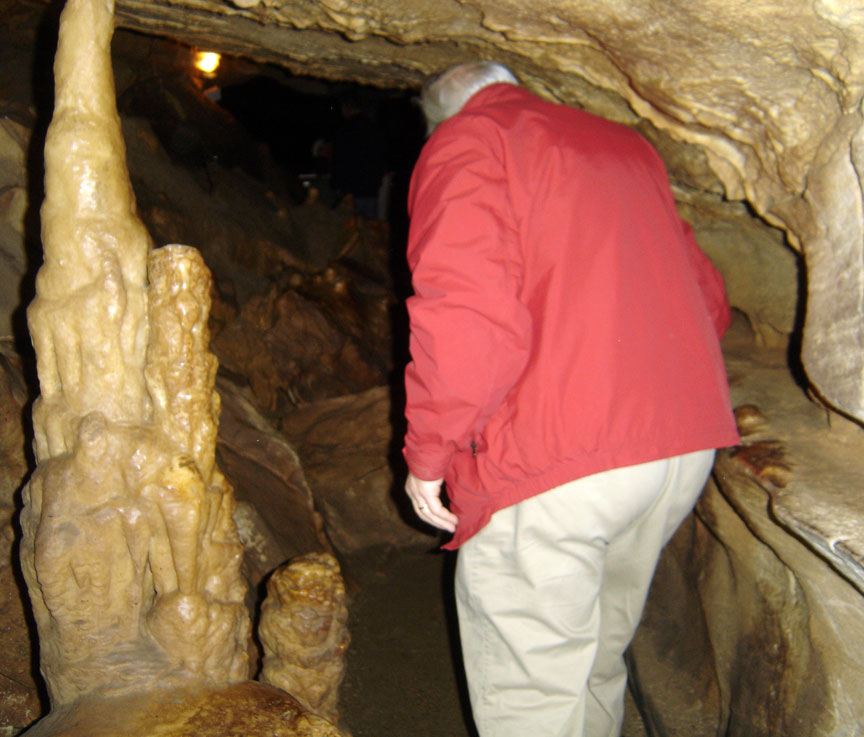 "The Traveler" making his way though the low passage 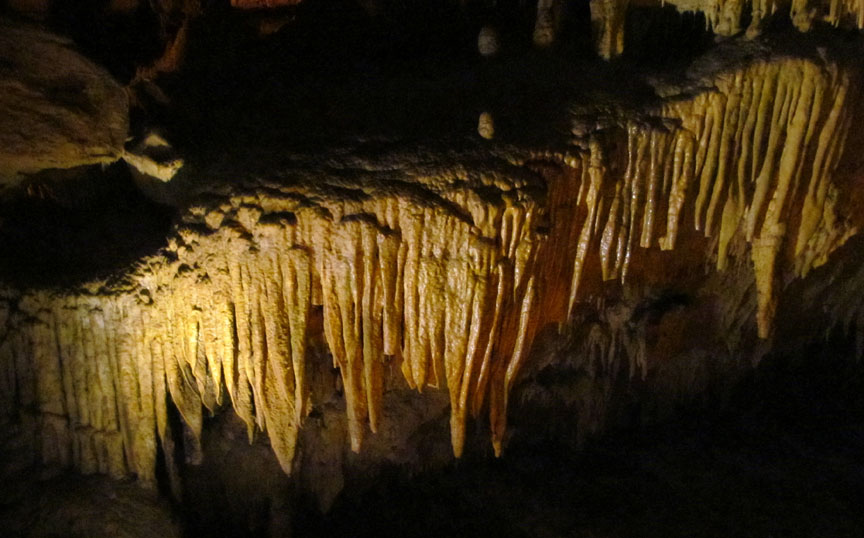 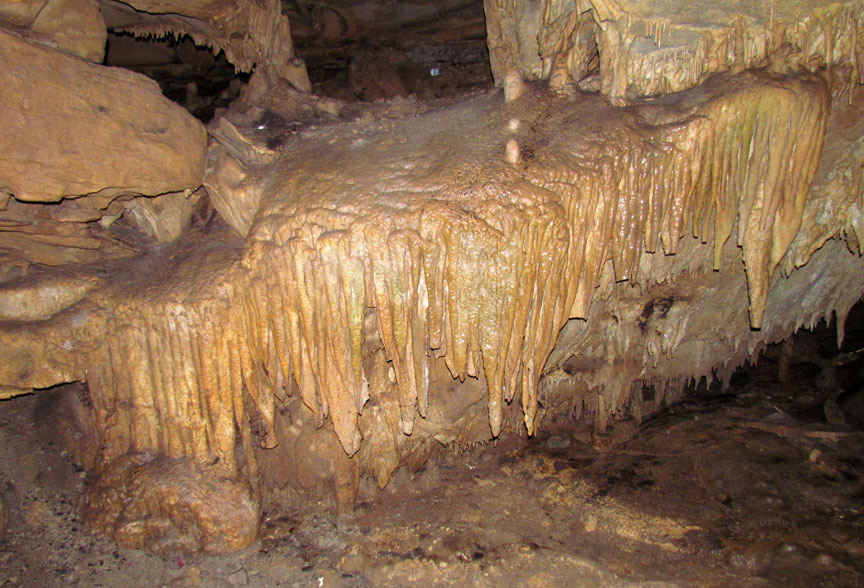 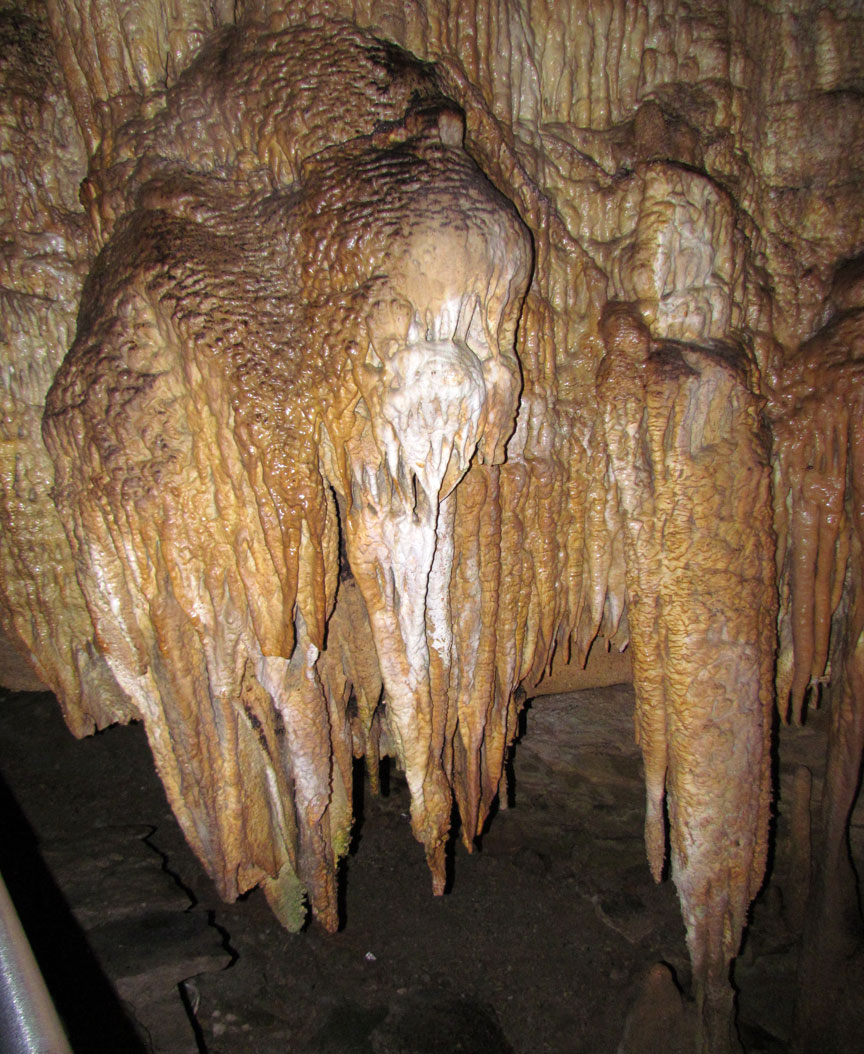 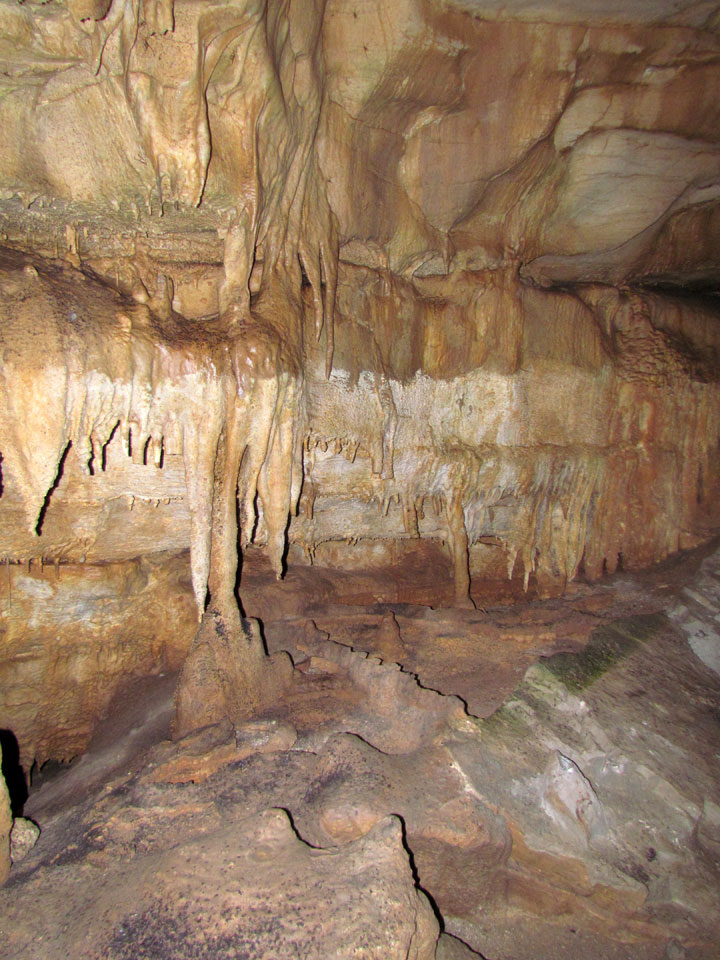 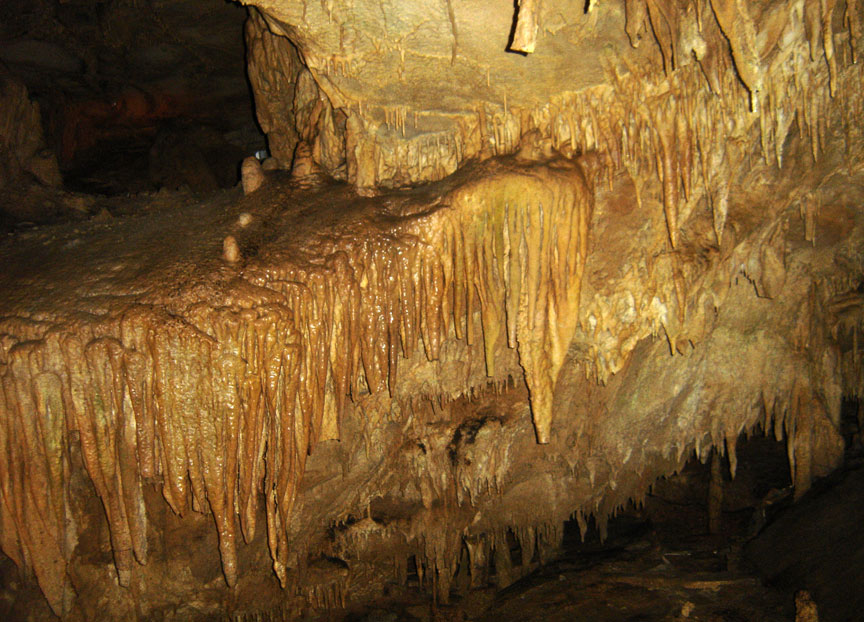 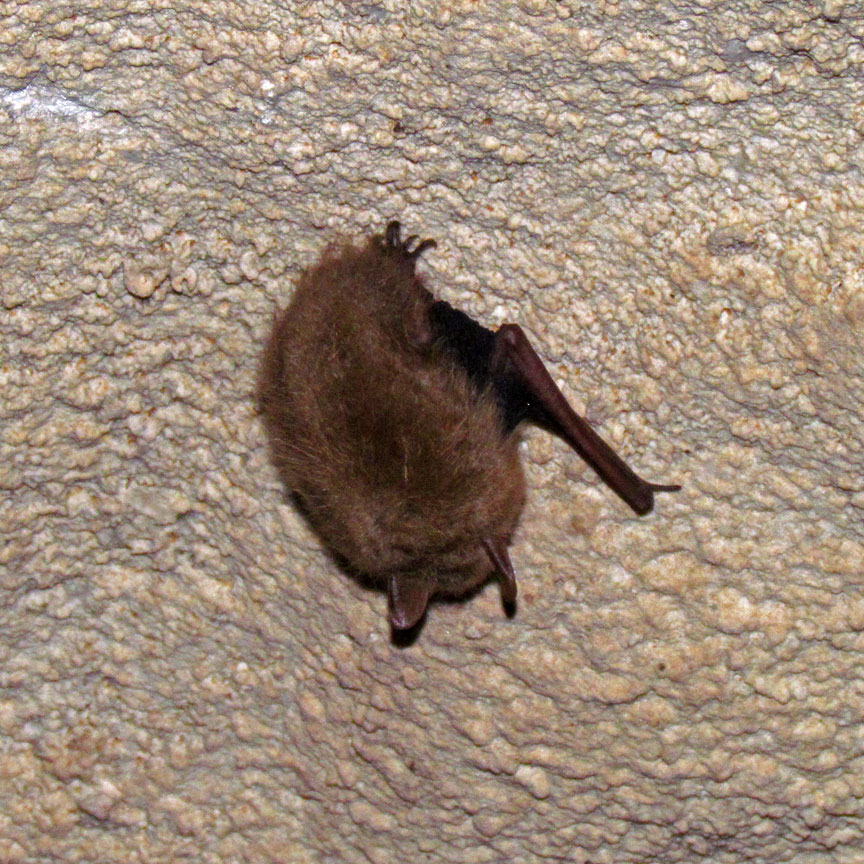 bats are resident in the cave 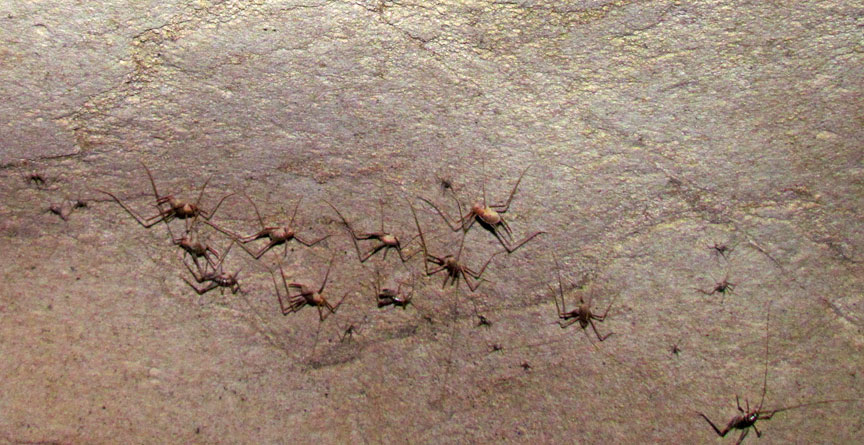 as well as these small spiders 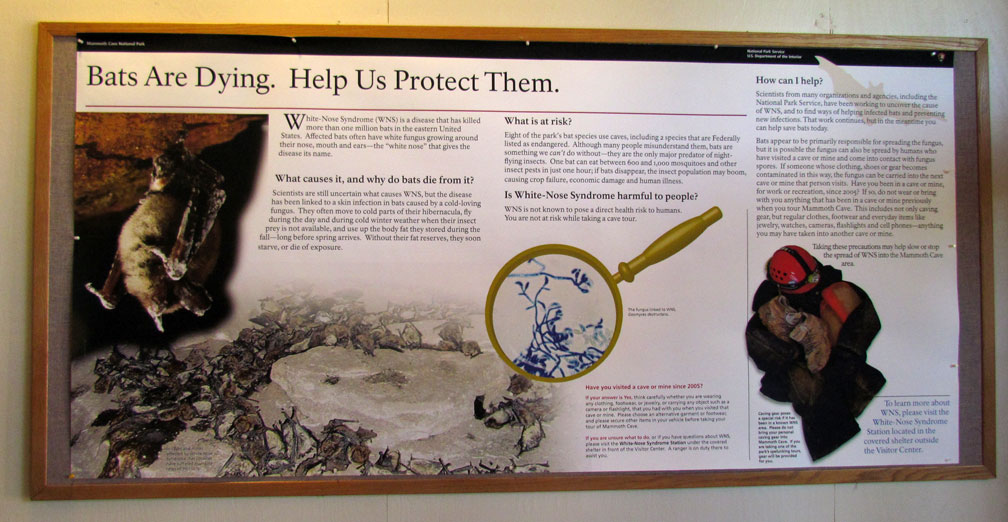 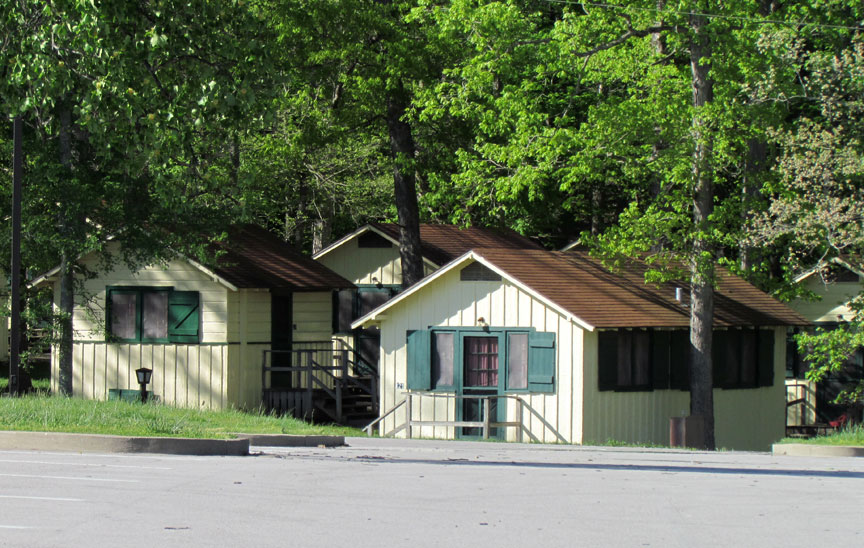 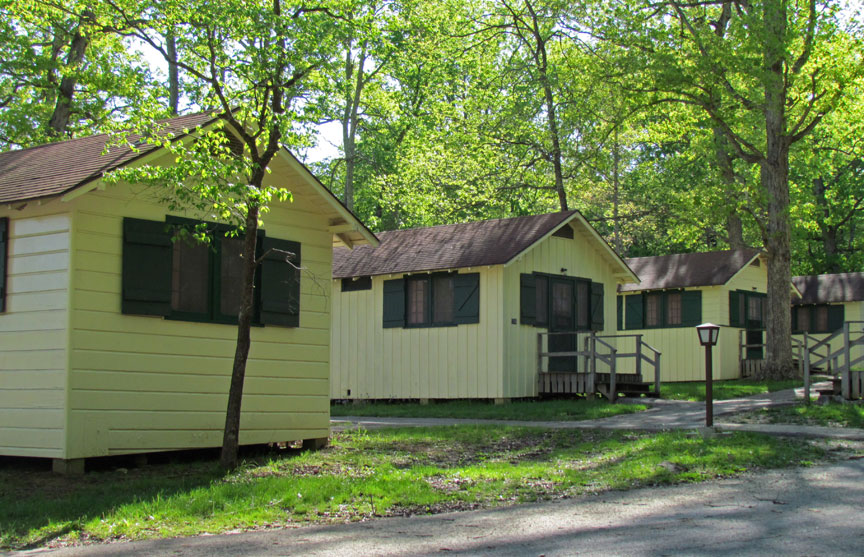 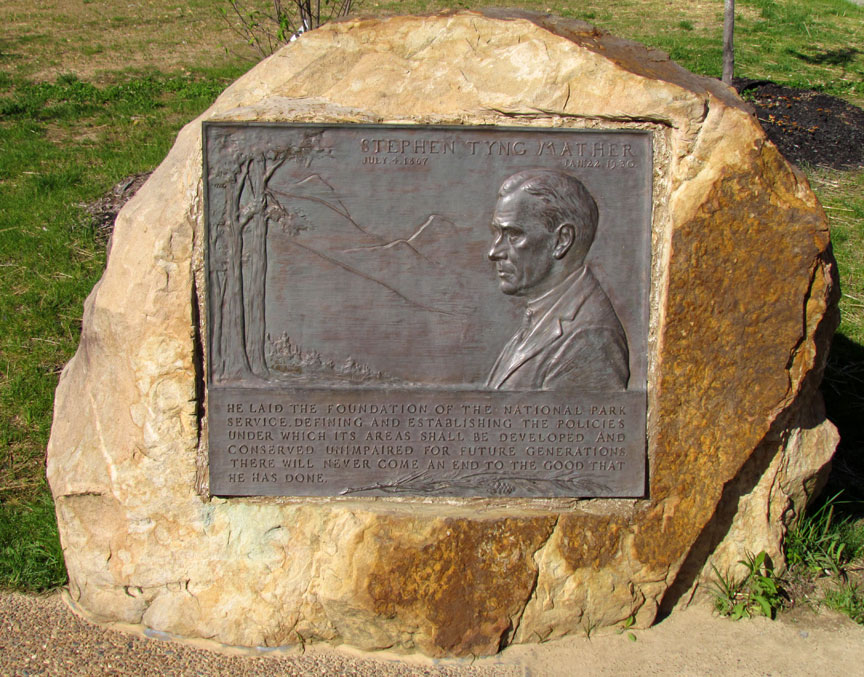 in Memory of Stephen Mather