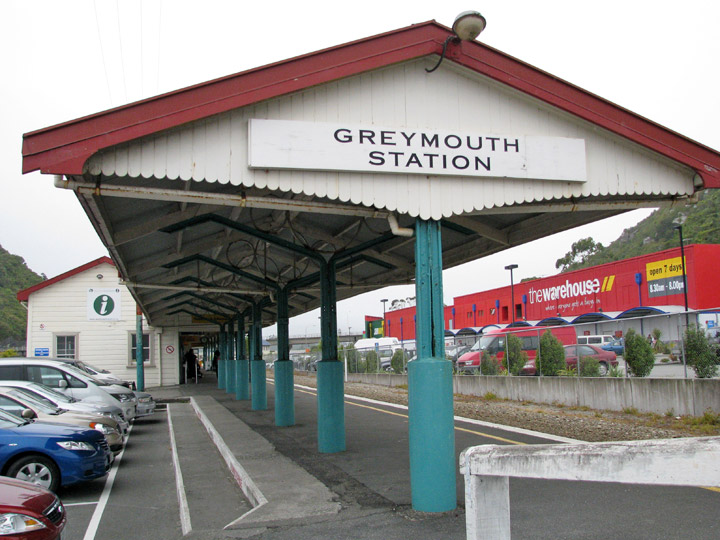 The TranzAlpine is a passenger train service operated by Tranz Scenic on the South Island of New Zealand. This trip is often regarded to be one of the world's great train journeys for the scenery through which it passes. The journey is 223 kilometers (139 mi) one-way, taking about four and a half hours. In total, there are 19 tunnels and 4 viaducts, with the Staircase being 73 meters high. 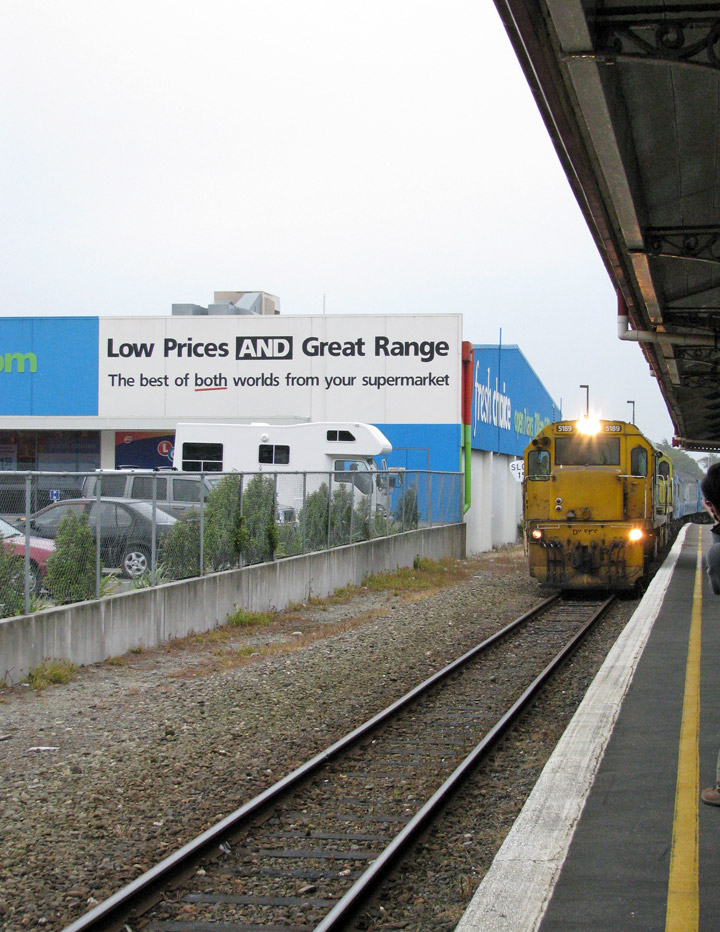 The service has become increasingly popular, and carried 204,000 passengers in the financial year ending 2007. 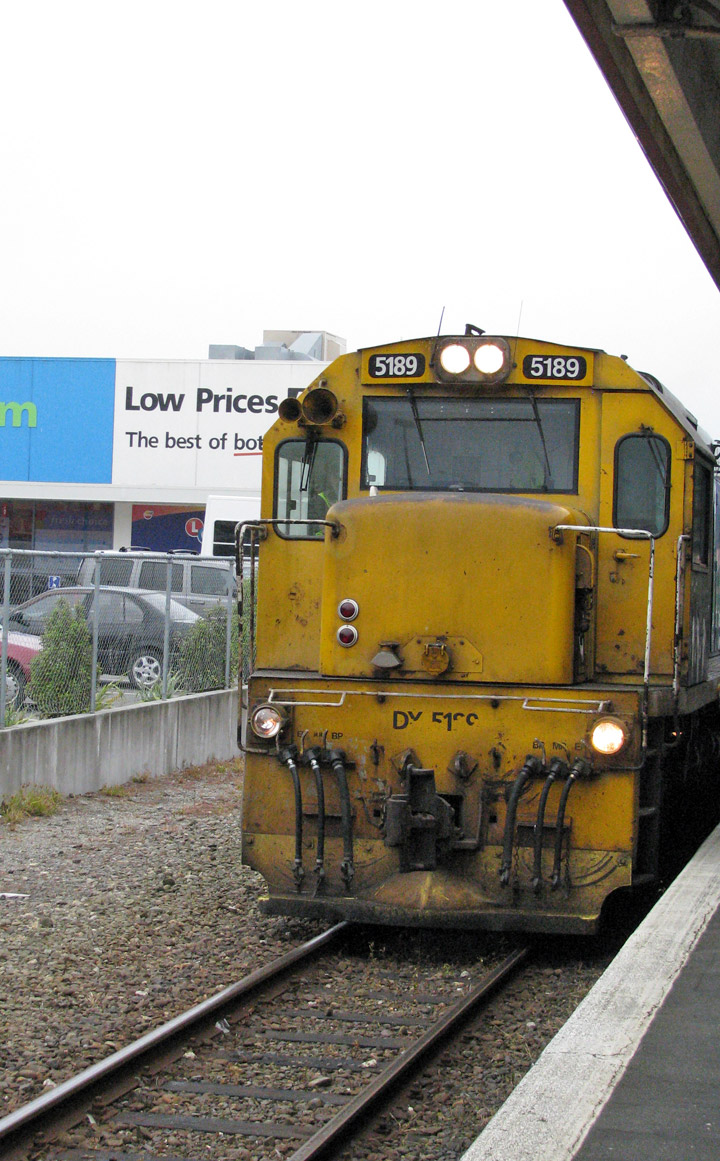 The train was introduced November 22, 1987, to replace the conventional Christchurch-Greymouth and Greymouth - Christchurch express trains, and became one of the New Zealand Railways Corporation's 'new' tourist oriented passenger services utilizing refurbished rolling stock. Accompanying this new-look train was a new-look livery and rebranding. 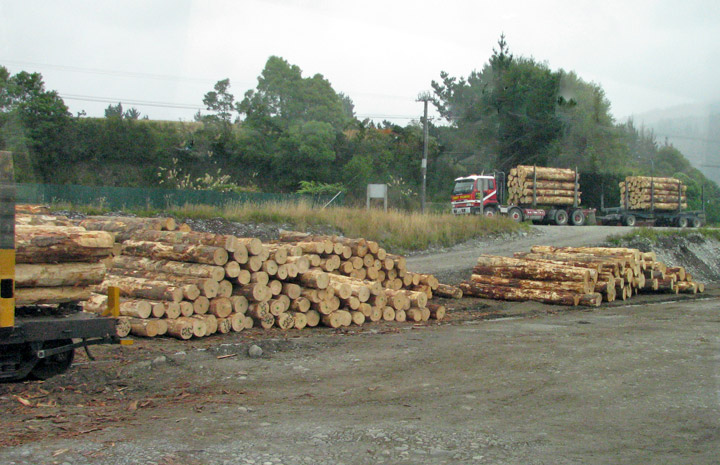 From late 1982 until 1983 twelve second class NZR 56-foot carriages, three with luggage compartments at one end, were refurbished with new "Supervent" windows, fluorescent strip lights, wall-to-wall carpet, and later still, new seats designed by Addington Workshops were introduced to replace the former articulated diesel-hauled Grass Grub carriages. A matching 56 foot van and six 50 foot wooden bogie box wagons for parcels completed the consist. Some of these wagons had served in the same capacity and in the green colour scheme with the Grass Grubs on the Picton and Greymouth routes and one wagon had served the old yellow Northerner as a parcels van, prior to the introduction of the twelve 56' cars. These cars and wagons, like their Grass Grub predecessors, worked the Picton Express (out and back) and Greymouth or West Coast Expresses (one each way simultaneously). All were painted in a bright red color scheme. 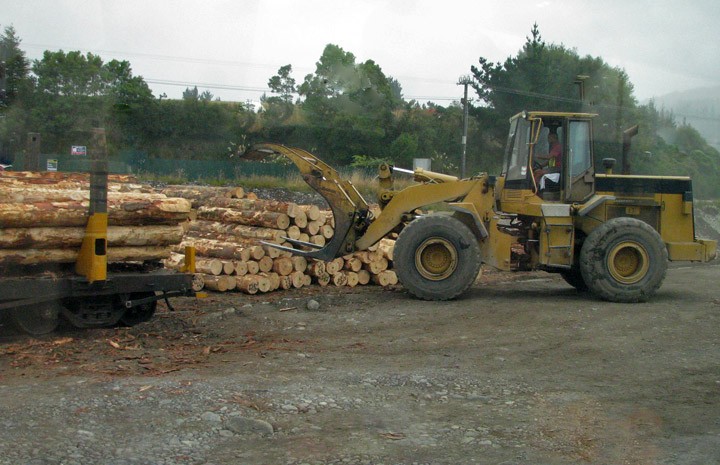 However, with the deterioration of the yellow Northerner stock, cars to replace these had to be found by sourcing from the rest of the NZR 56-foot carriage fleet. The change in service was marked, with a refurbished modular Mitsubishi-built van turned power-luggage van with handbrake end-mounted 11kW petrol generator, and three carriages, one from the Endeavour and later Southerner converted into a servery car seating 31 in reupholstered Addington Workshops-produced seats, in bays of four with two pairs of seats each facing into a table, arranged alcove-style, with windows over double the size of the old ones, enabling better views of the alpine scenery, reupholstered seats and carpet, and a buffet counter service, to replace refreshment stops at railway station cafeterias at Springfield and Otira. The other two cars were red Picton - Greymouth cars that were similarly refitted and repainted. These cars retained their smaller windows and seated 50, same seating arrangement and type as the servery car. 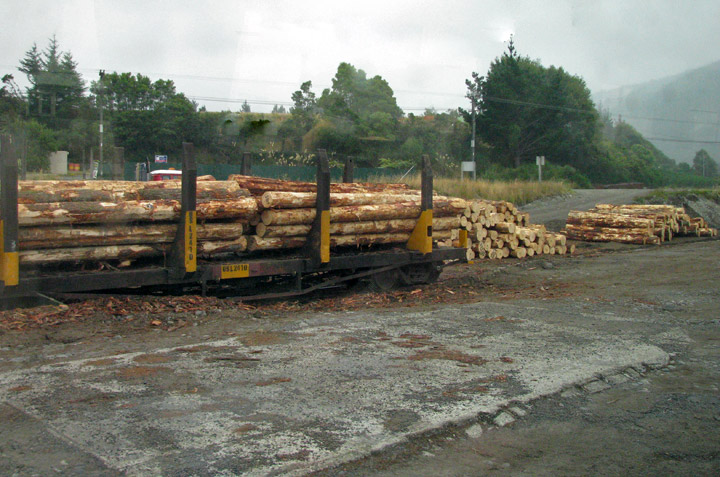 on the rail car

Reducing the service to an "out and back" format as opposed to "one each way" freed up carriages for other services, and by refurbishing existing stock it was hoped that the move would draw people to the previously poorly-performing Greymouth passenger trains. 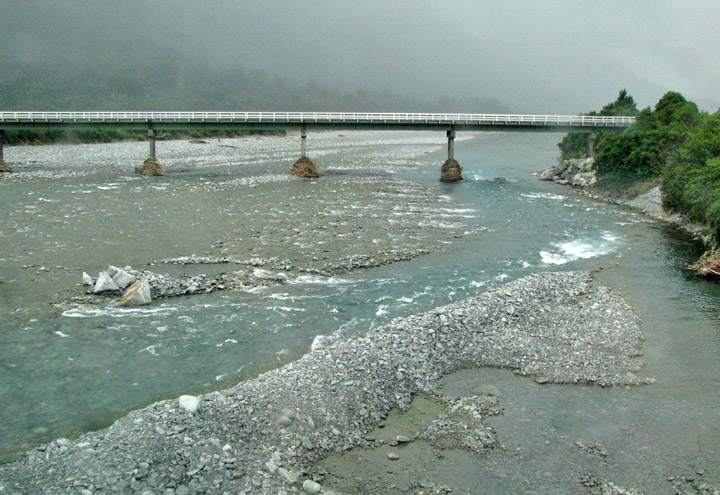 Soon, two more Picton - Greymouth cars were refitted for the TranzAlpine similar to the servery and observation car, so the two small-window cars could be slotted into the Southerner consists. These new "big window" cars each sat 51, same seating arrangement and type as the servery car. In the early 1990s, the first generation TranzAlpine panorama cars had a new pressure ventilation system installed, similar to the Bay Express and the rear view/observation car introduced to this train in 1991. 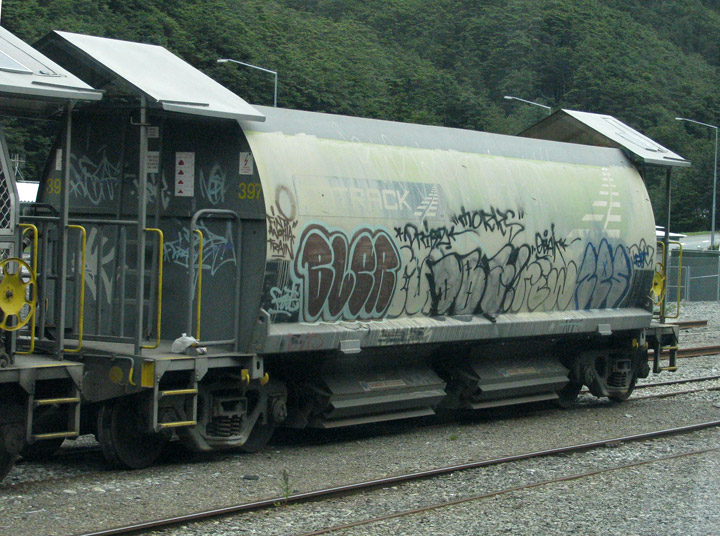 And, in 1988, the train won a Tourism New Zealand Award and was even voted as one of the top 10 "short" train journeys in the world. 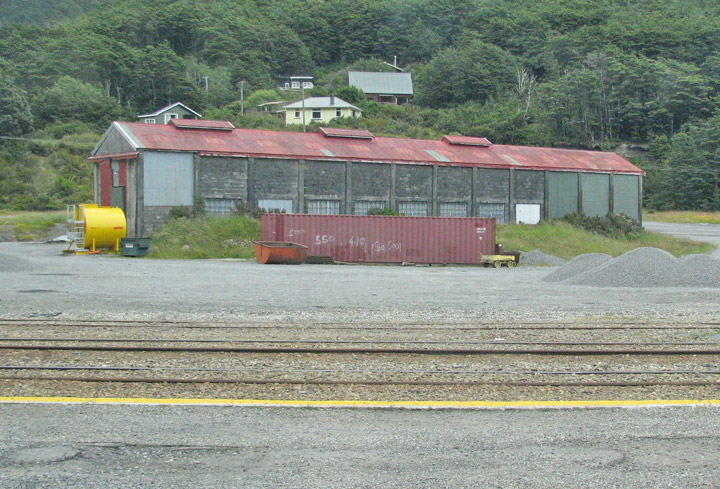 The TranzAlpine's popularity increased, and on days the Southerner was not operating, it was common to see these cars bolstering the three hard-pressed TranzAlpine cars. In 1991, a Southerner power-luggage van had the end module away from the handbrake end converted into an open viewing area for passengers to enhance the already spectacular scenery on the route. Realizing this increased public attention, and with the success of air-conditioned panorama carriage trains on the North Island Main Trunk, between August, 1994 and April, 1995, eight cars (one a former Southerner then InterCity spare buffet car, one a former Endeavour later Southerner servery car, two from the Northerner, two from the Southerner and two from Auckland suburban services) were extensively overhauled and refitted with panorama windows like the earlier TranzAlpine, Coastal Pacific later TranzCoastal, pressure-ventilated Bay Express and air conditioned Northerner/Overlander Express trains and seating 50 (day cars) and 26 (servery cars), alcove-style, in new seats like those installed in refitted Wairarapa Connection and North Island Main Trunk carriages. A Mitsubishi built modular van was refitted with a 90kW generator in the central module as opposed to the handbrake end modules on NIMT vans, to facilitate converting one end module into a public open viewing area. 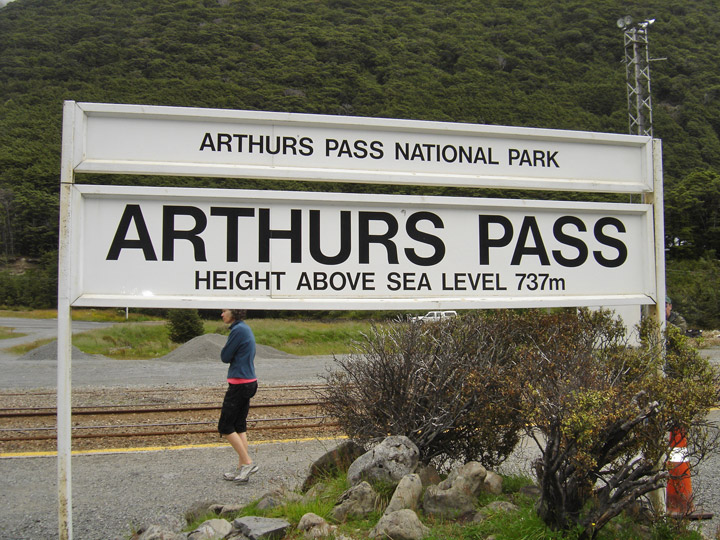 In 1995, the viewing van had its second end module converted for public access to match the first end. This was to facilitate its being marshaled into the centre of the new train, which was now re-organized into two 4-car train sets in one, separated by the power/baggage van. To compensate for luggage on the reformed train, the original TranzAlpine van was stripped of its generator and made to carry luggage only. 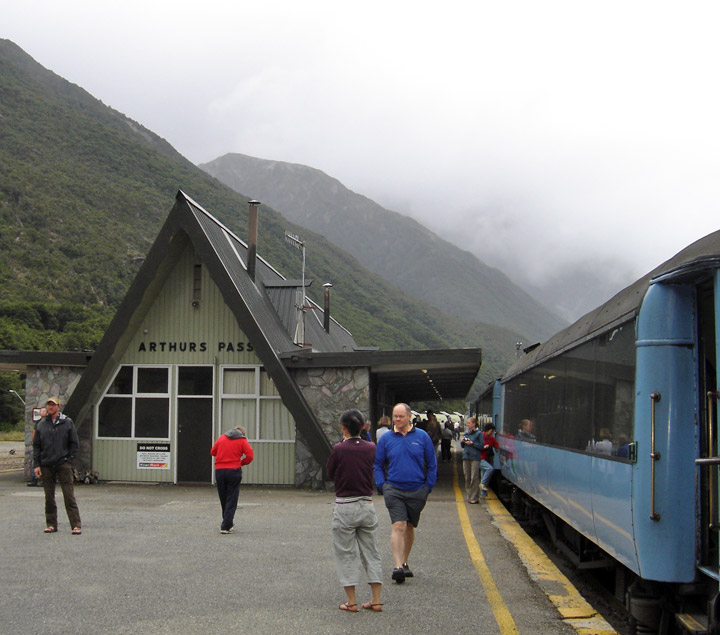 In 1998, a second van, which was the second of three so fitted as 11kW power/baggage vans for the original TranzAlpine and Coastal Pacific, was equipped with 90kW generator housed in the central module, for this train. 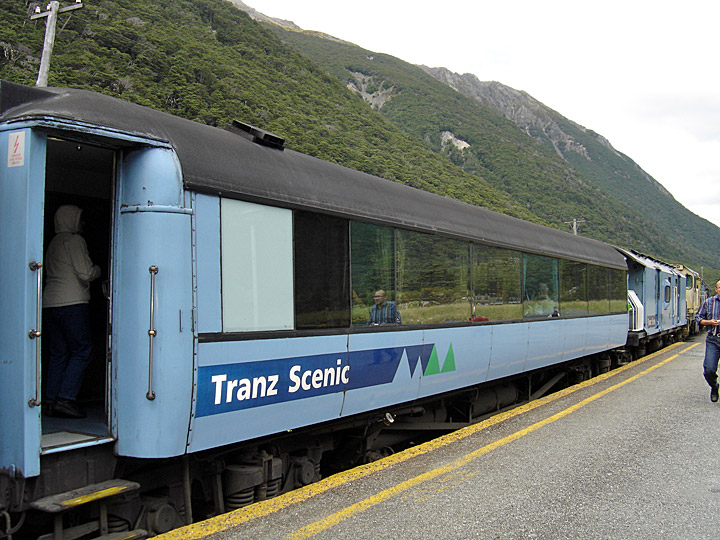 Even after the eight air conditioned cars were introduced in 1994-1995, the train still borrowed panorama cars from the Southerner, because of the train's increasing popularity. 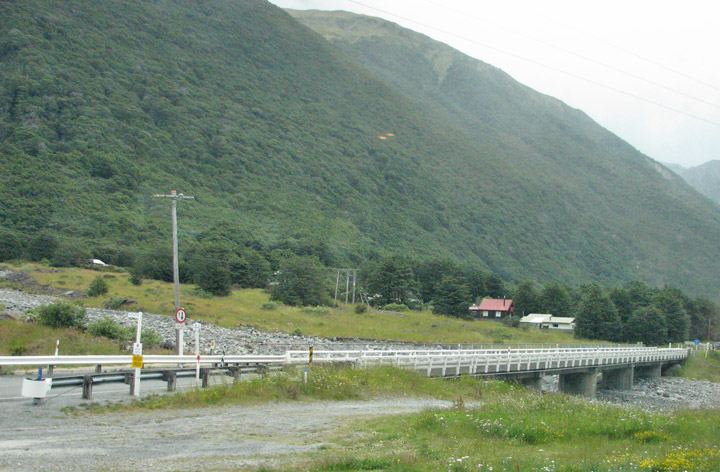 As part of the rebranding of the New Zealand Railways Corporation during the 1980s, a new dark blue livery was applied to the TranzAlpine, with a horizontal full-length 220 mm thick white stripe sandwiching a 100 mm thick red band. The name InterCity was imposed into the stripe as well. This dark blue livery would become standard and remain contemporary until October 18 1995. In 1990, when New Zealand Rail Limited took over rail operations from the Corporation, the InterCity livery was modified to facilitate the new blue and yellow primary colours, and the red band on carriage sides was replaced by a 100 mm yellow one. In 1993 - 1994, the yellow band was replaced by a green 100 mm band, the white stripe and dark blue livery retained. In 1995, a new full-length 350 mm light blue stripe, incorporating the Tranz Scenic logo was introduced on cars that were not painted all over in the new blue colour scheme. However, during the 1995 rebranding, the TranzAlpine cars were the first long-distance passenger cars to receive the new paint scheme and did not wear the transitional light blue stripe. 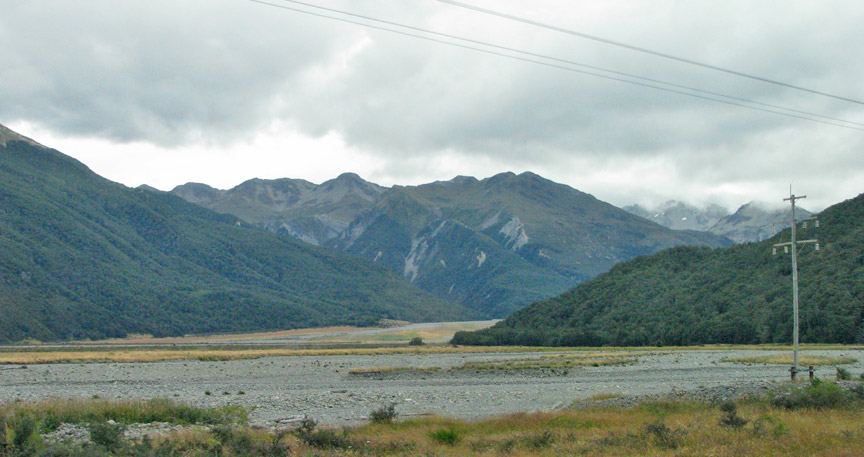 In early 1991, a former Endeavour car was completely rebuilt as a panorama and rear-view car to replace The Connoisseur car, that car refurbished in the standard "big window" InterCity seats and tables carriage format. In a continuous attempt to attract the traveling public back to rail, InterCity expanded on what had begun in 1987, when a Southerner car had been leased to a private tourist firm. The original carriage offered enhanced services, including complementary meals, refreshments and newspapers. However, this second carriage, also named The Connoisseur car, and which also offered improved services over those afforded to other TranzAlpine passengers, was transferred to the North Island Main Trunk passenger services by the end of 1991.

Today, the service runs daily between Christchurch and Greymouth. After leaving Christchurch, the train travels through the fertile Canterbury Plains past the Waimakariri River along the Main South Line, to Rolleston. It then turns onto the Midland Line, which passes through the Southern Alps past the spectacular Waimakariri River gorge, via the Otira Tunnel and terminates in Greymouth, on the West Coast. 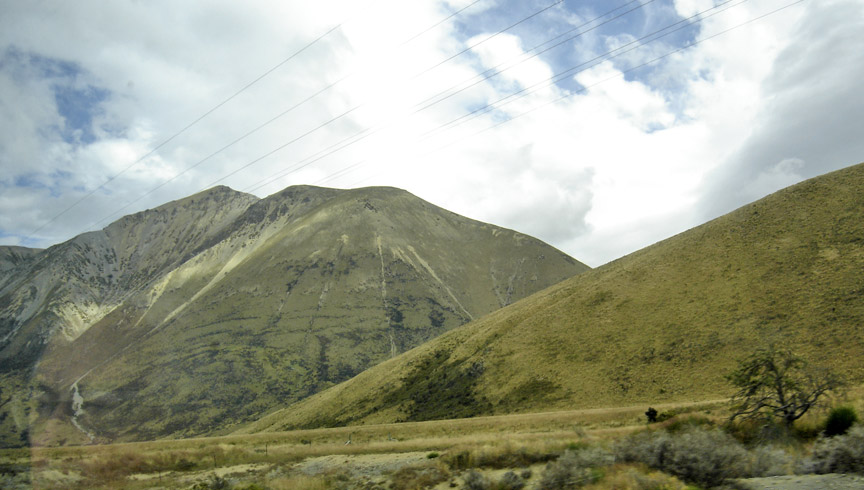 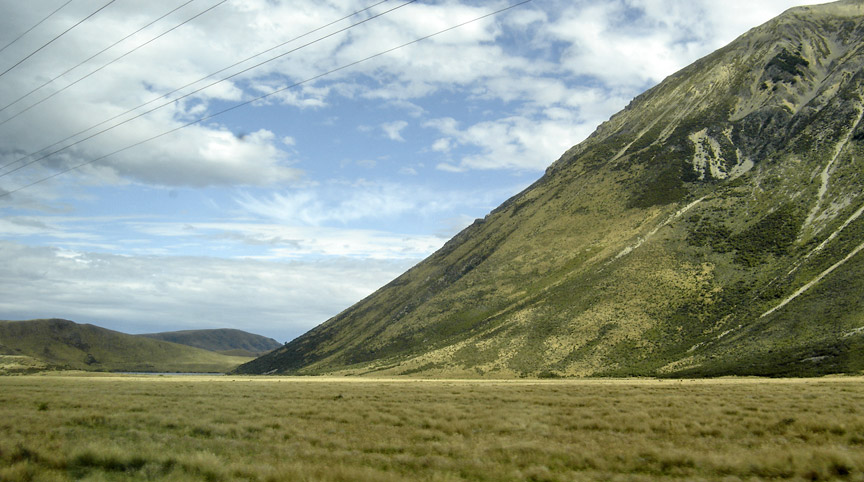 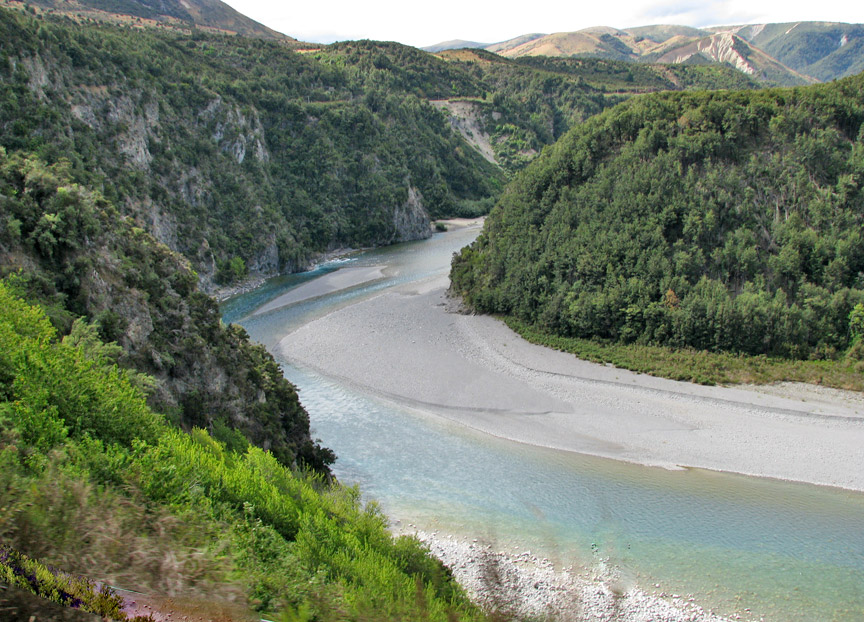 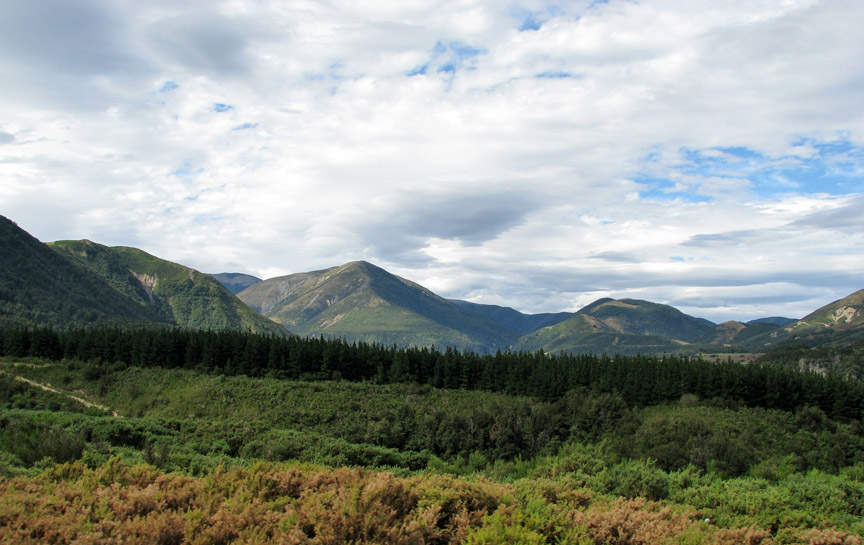 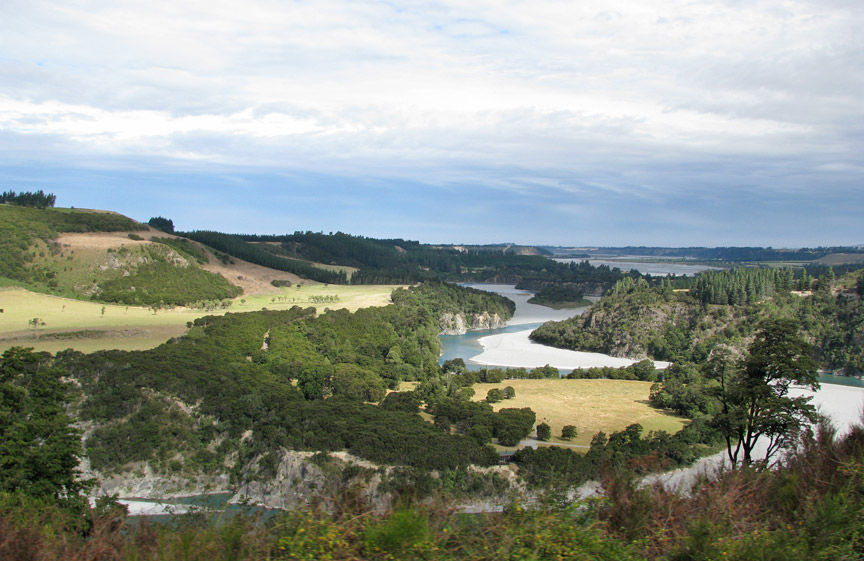 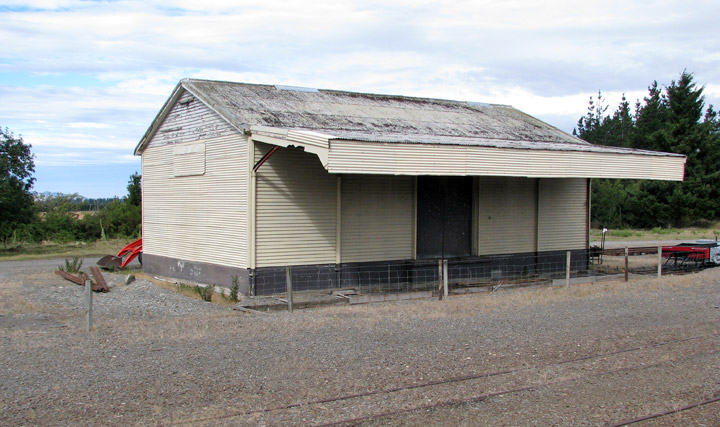 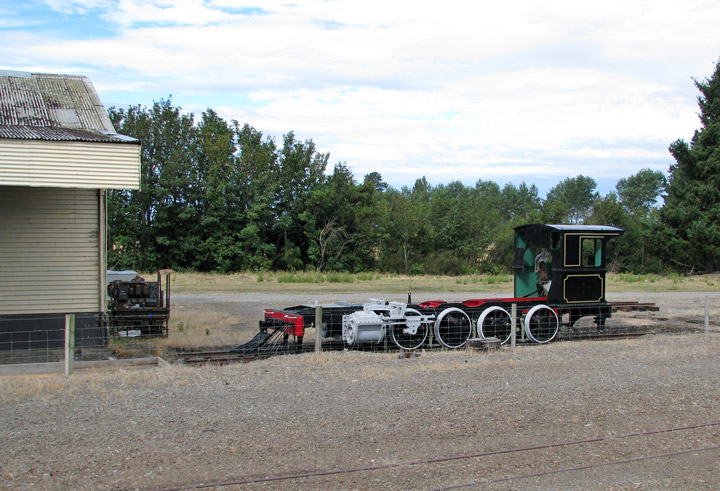 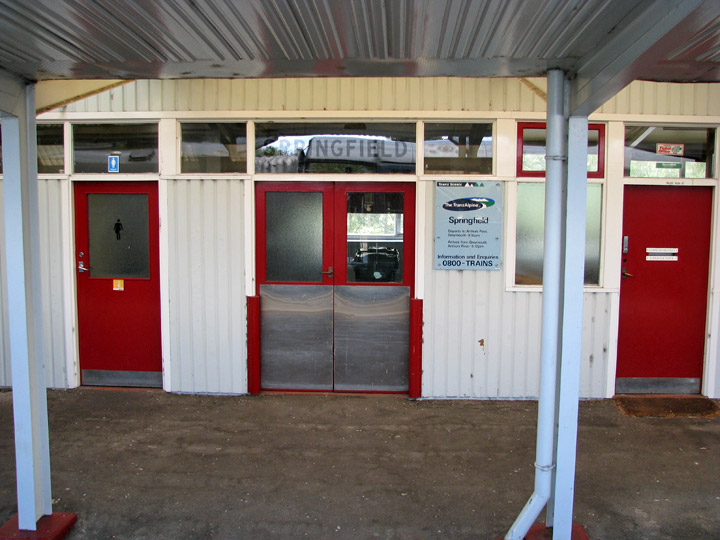 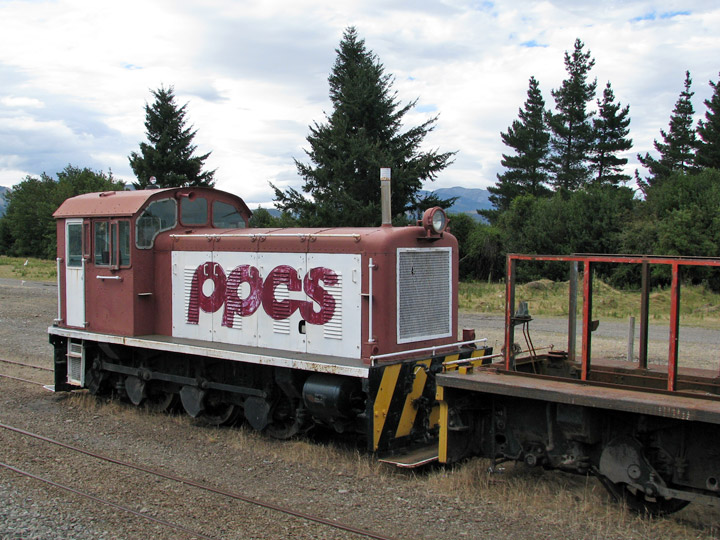 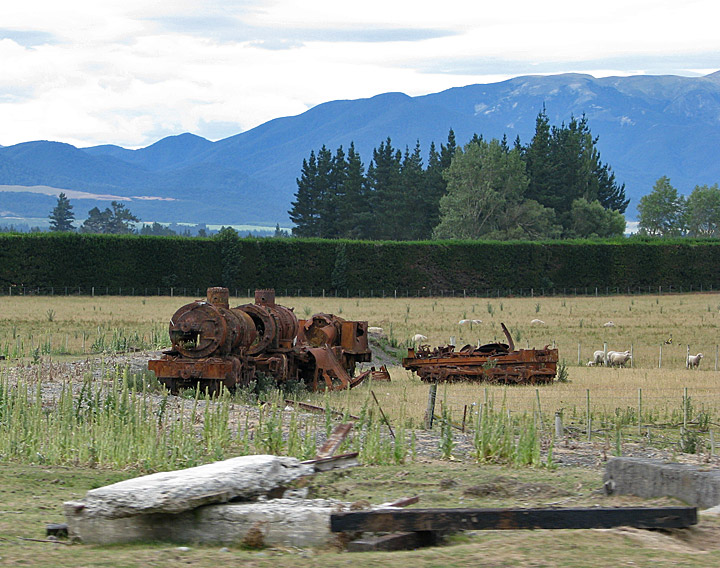 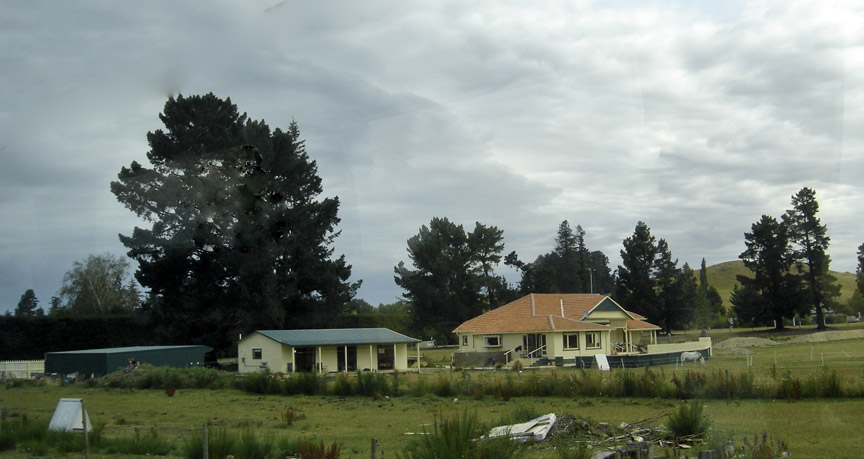 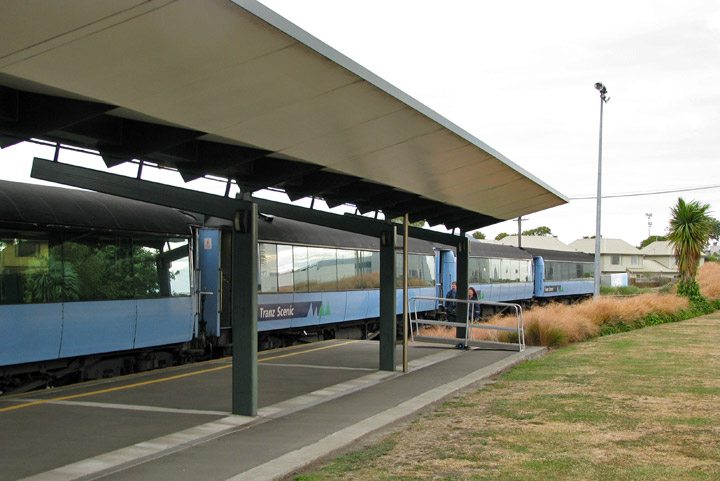 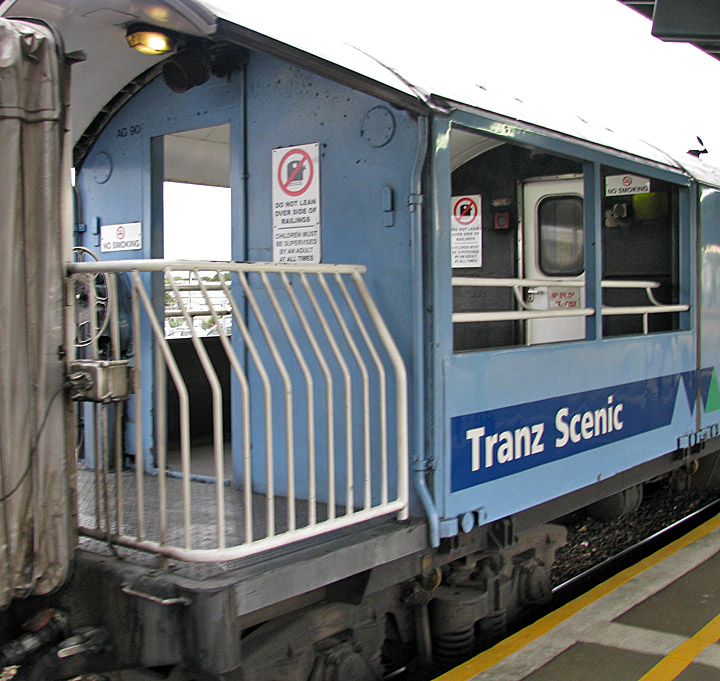 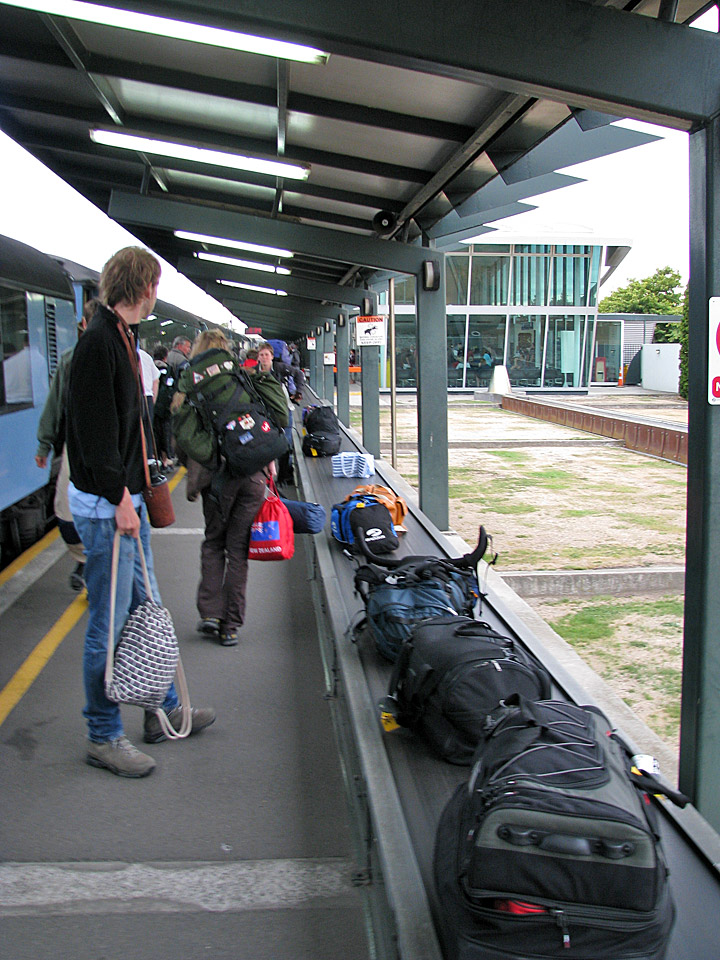 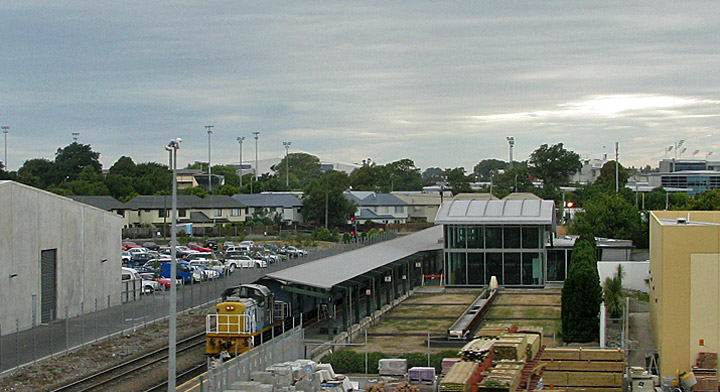