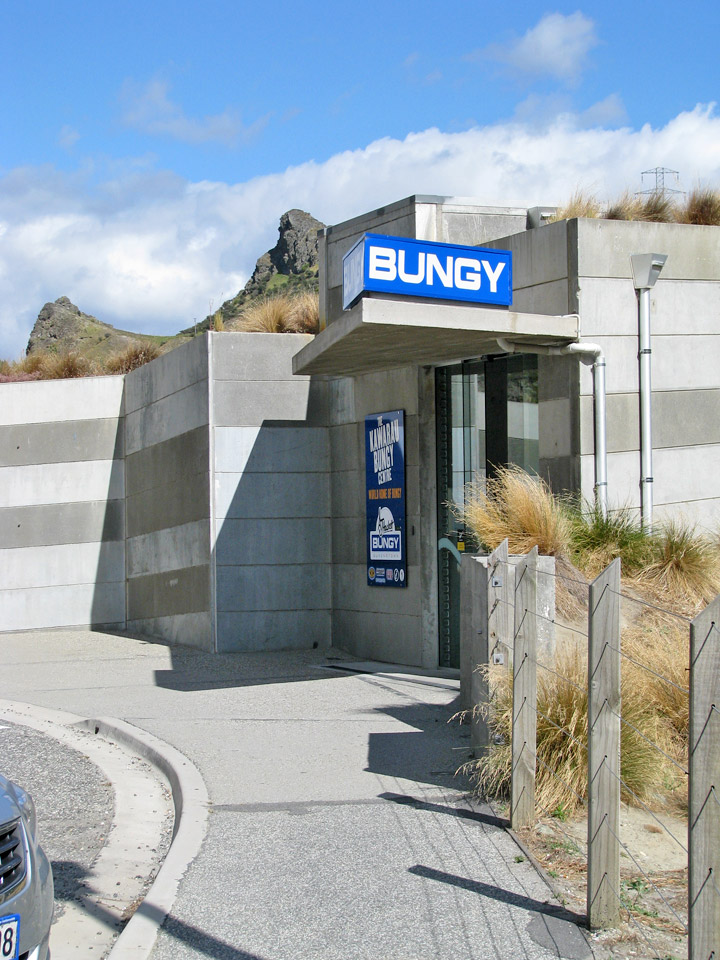 Bungee jumping (also spelled "Bungy" jumping) is an activity that involves jumping from a tall structure while connected to a large elastic cord. The tall structure is usually a fixed object, such as a building, bridge or crane; but it is also possible to jump from a movable object, such as a hot-air-balloon or helicopter, that has the ability to hover over one spot on the ground. The thrill comes as much from the free-falling as from the rebounds. 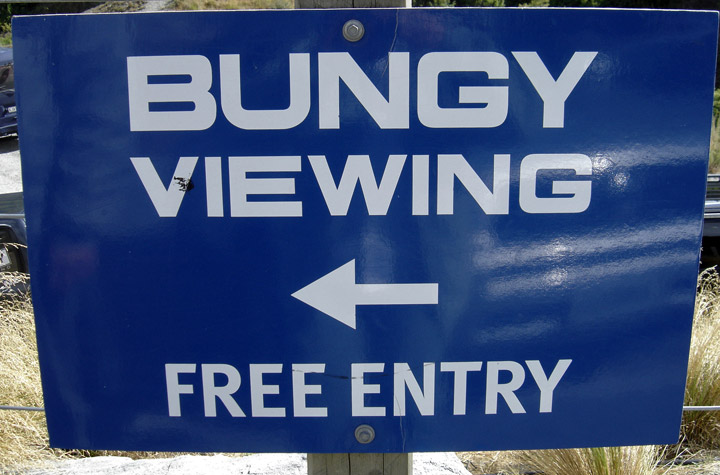 When the person jumps, the cord stretches and the jumper flies upwards again as the cord snaps back and continues to oscillate up and down until all the gravitational potential energy and kinetic energy of the fall is converted into heat, sound, and other forms of non-mechanical energy. 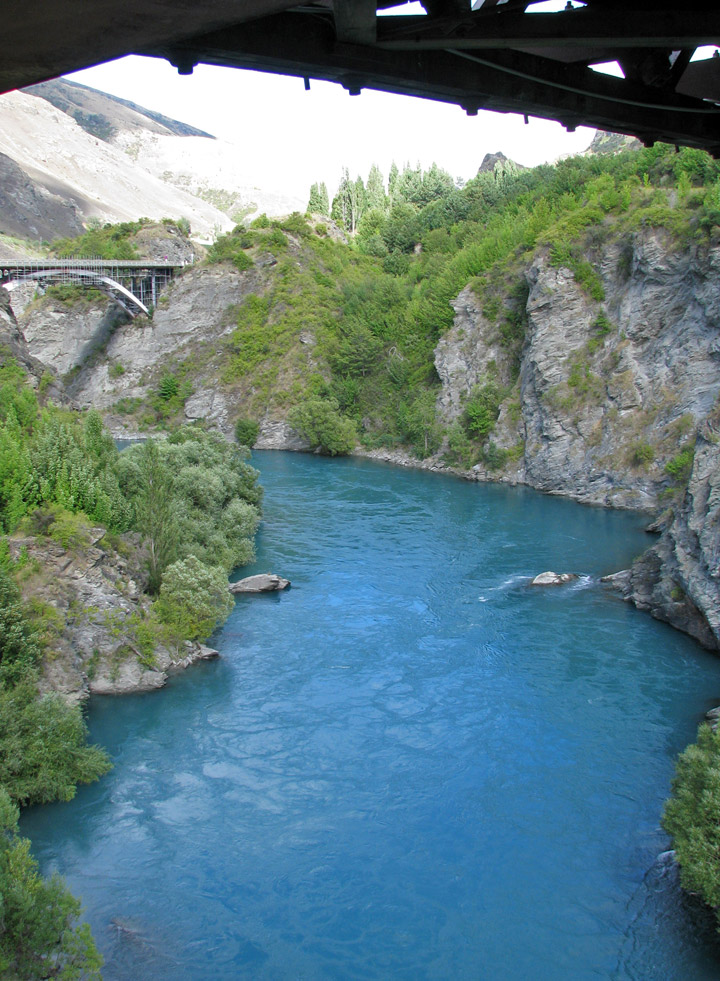 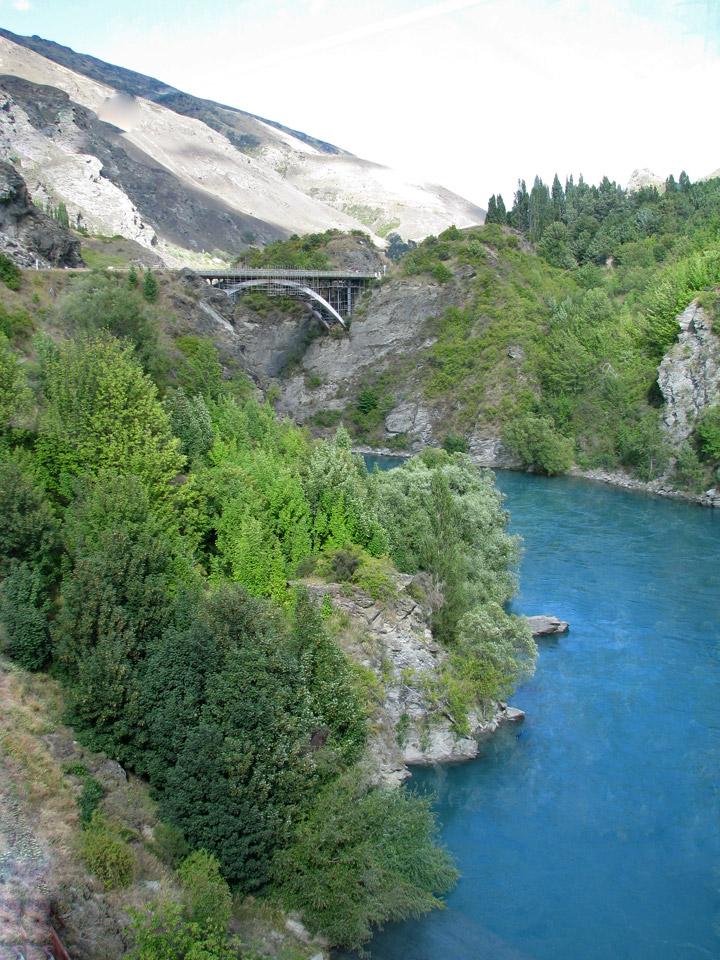 The word bungee originates from West Country dialect, meaning "Anything thick and squat", as defined by James Jennings in his book "Observations of Some of the Dialects in The West of England" published 1825. Around 1930 the name became used for a rubber eraser. The word bungy, as used by A J Hackett, is said to be "Kiwi slang for an Elastic Strap". Cloth-covered rubber cords with hooks on the ends have been available for decades under the generic name bungee cords. 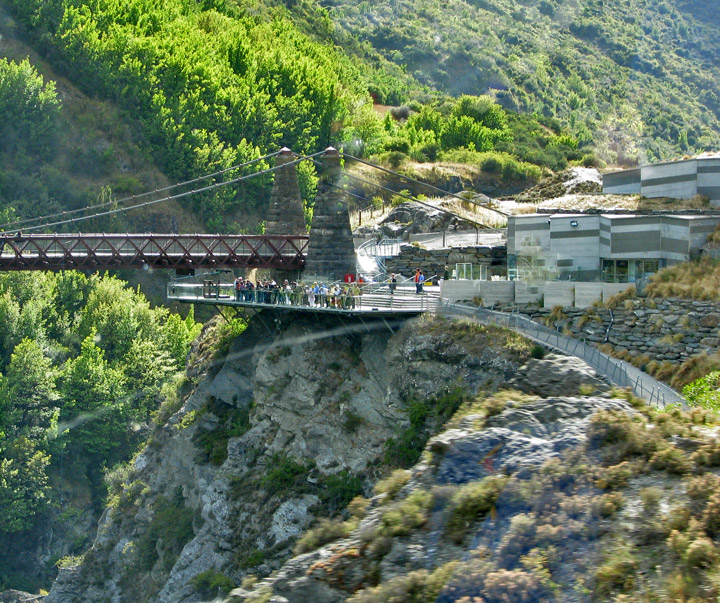 In the 1950s David Attenborough and a BBC film crew brought back footage of the "land divers" of Pentecost Island in Vanuatu, young men who jumped from tall wooden platforms with vines tied to their ankles as a test of their courage and passage into manhood. A similar practice, only with a much slower pace for falling, has been practiced as the Danza de los Voladores de Papantla or the 'Papantla flyers' of central Mexico, a tradition dating back to the days of the Aztecs. 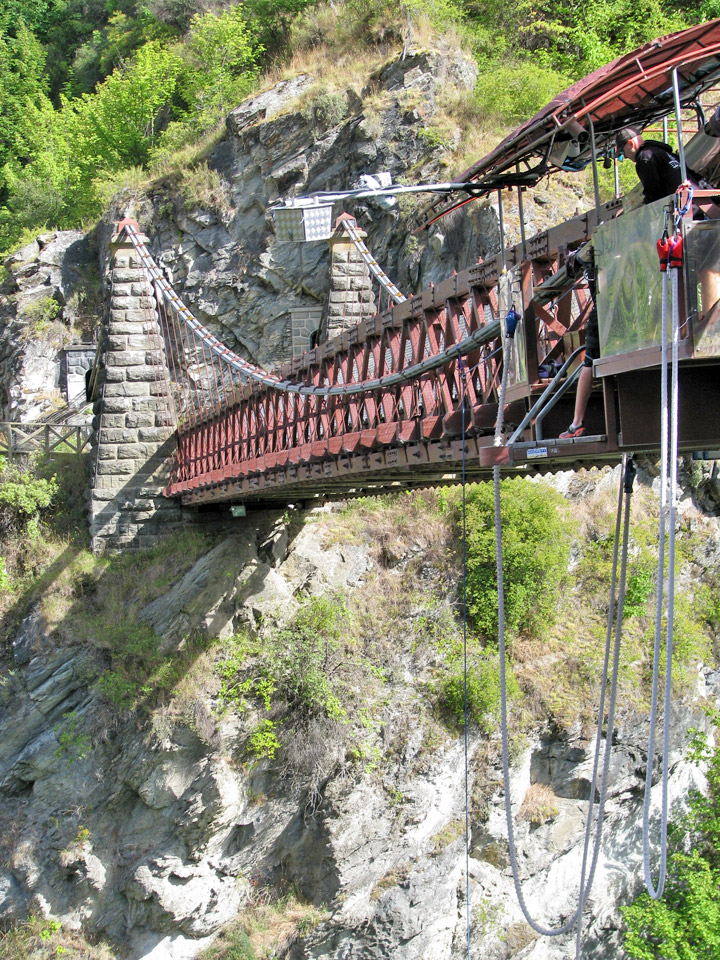 where the legs are fastened

The first modern bungee jumps were made on 1 April 1979 from the 250-foot Clifton Suspension Bridge in Bristol, by David Kirke, Chris Baker, Simon Keeling, Tim Hunt and Alan Weston of the Oxford University Dangerous Sports Club. The jumpers were arrested shortly after, but continued with jumps in the US from the Golden Gate and Royal Gorge bridges, (this last jump sponsored by and televised on the American program That's Incredible) spreading the concept worldwide. By 1982 they were jumping from mobile cranes and hot air balloons, and putting on commercial displays. 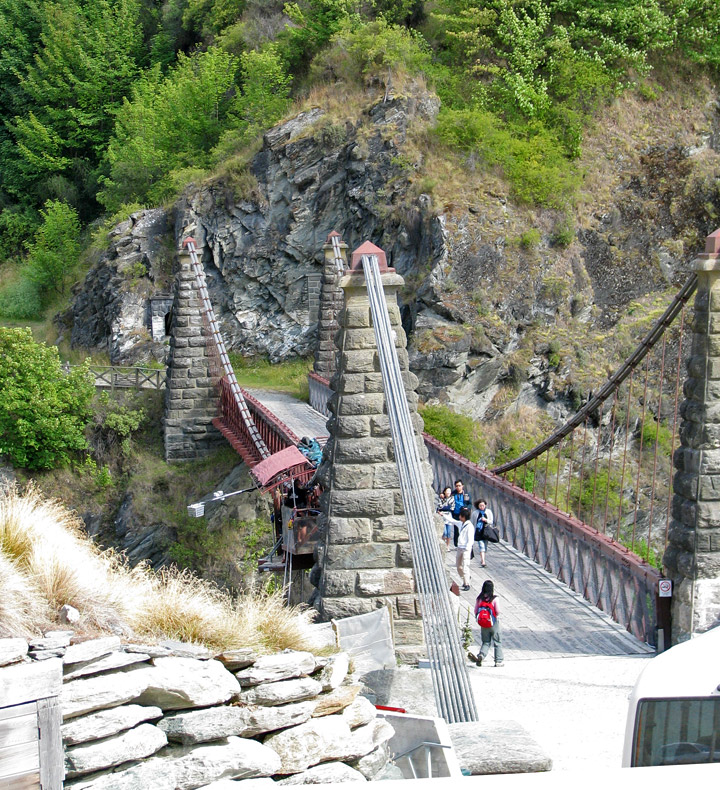 jump equipment on the bridge

Commercial bungee jumping began with the New Zealander, A J Hackett, who made his first jump from Auckland's Greenhithe Bridge in 1986. During the following years Hackett performed a number of jumps from bridges and other structures (including the Eiffel Tower), building public interest in the sport, and opening the world's first permanent commercial bungee site; the Kawarau Bridge Bungy at Queenstown in the South Island of New Zealand. Hackett remains one of the largest commercial operators, with concerns in several countries. 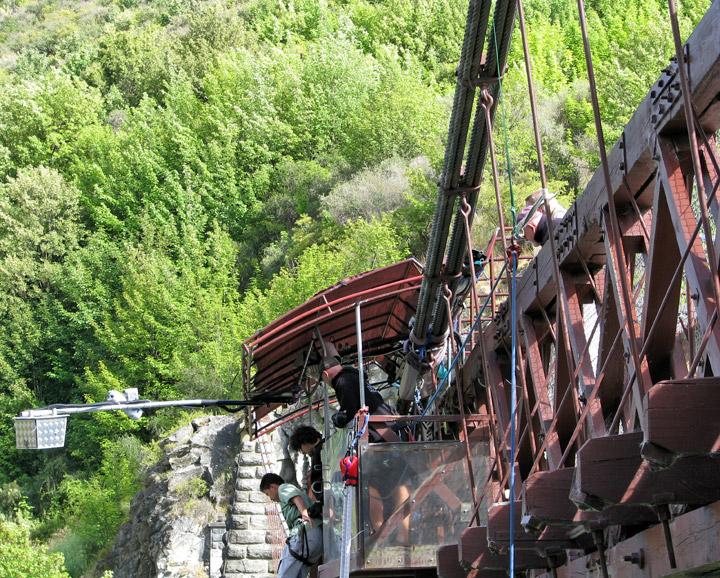 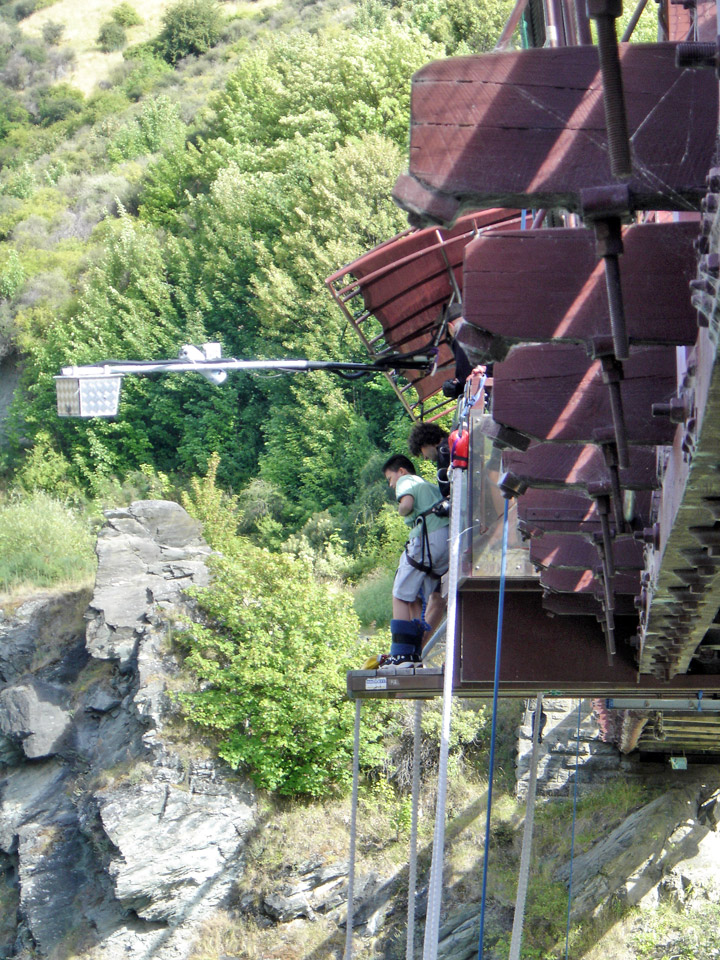 talking him into the jump 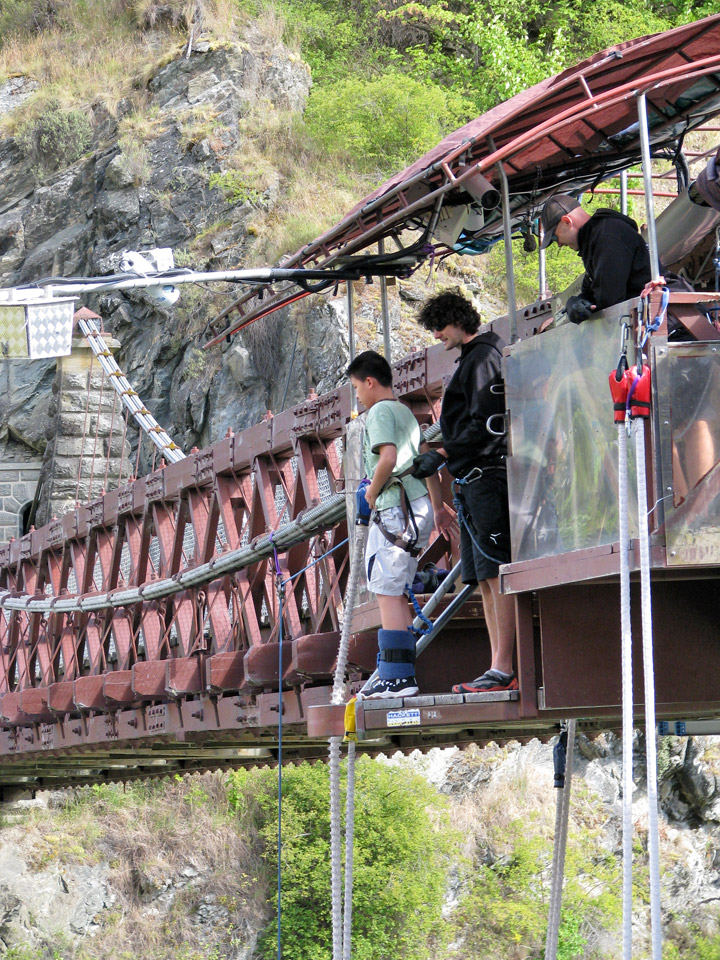 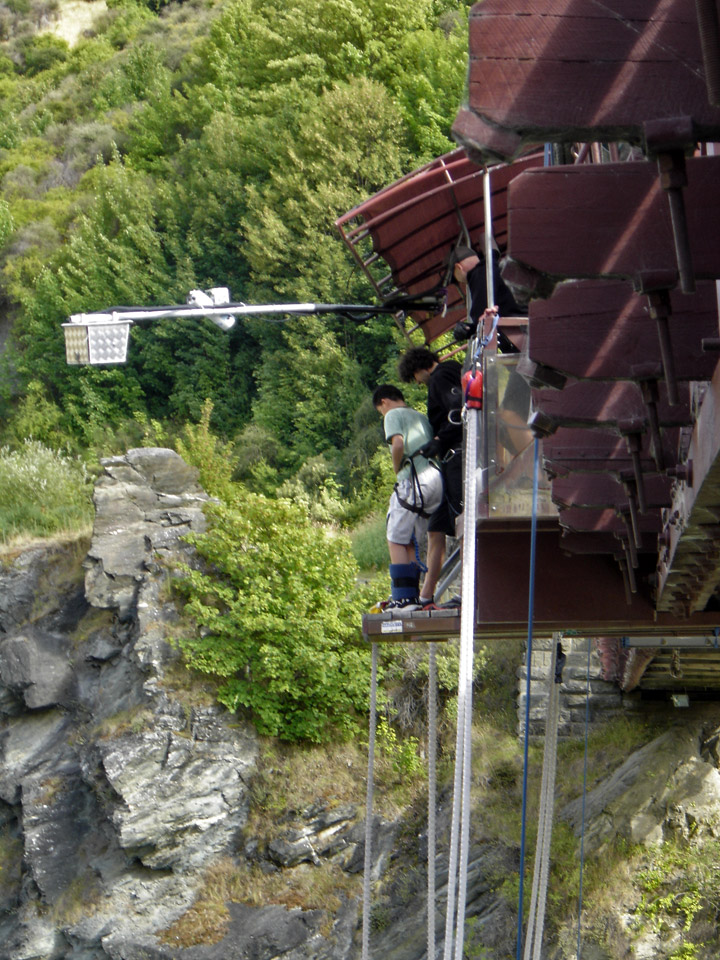 Despite the inherent danger of jumping from a great height, several million successful jumps have taken place since 1980. This is attributable to bungee operators rigorously conforming to standards and guidelines governing jumps, such as double checking calculations and fittings for every jump. As with any sport, injuries can still occur (see below), and there have been fatalities. A relatively common mistake in fatality cases is to use a cord that is too long. The cord should be substantially shorter than the height of the jumping platform to allow it room to stretch. When the cord reaches its natural length the jumper either starts to slow down or keeps accelerating depending upon the speed of descent. One may not even start to slow until the cord has been stretched a significant amount, because the cord's resistance to distortion is zero at the natural length, and increases only gradually after, taking some time to even equal the jumper's weight. 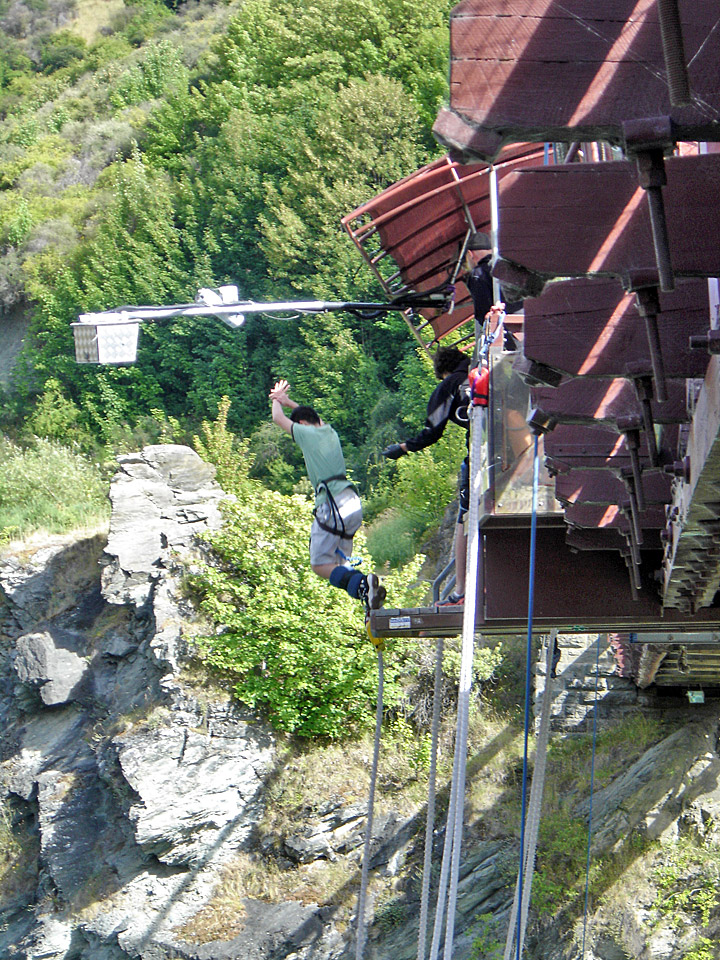 The elastic rope first used in bungee jumping, and still used by many commercial operators, is factory-produced braided shock cord. This consists of many latex strands enclosed in a tough outer cover. The outer cover may be applied when the latex is pre-stressed, so that the cord's resistance to extension is already significant at the cord's natural length. This gives a harder, sharper bounce. The braided cover also provides significant durability benefits. Other operators, including A J Hackett and most southern-hemisphere operators, use unbraided cords in which the latex strands are exposed. These give a softer, longer bounce and can be home-produced. 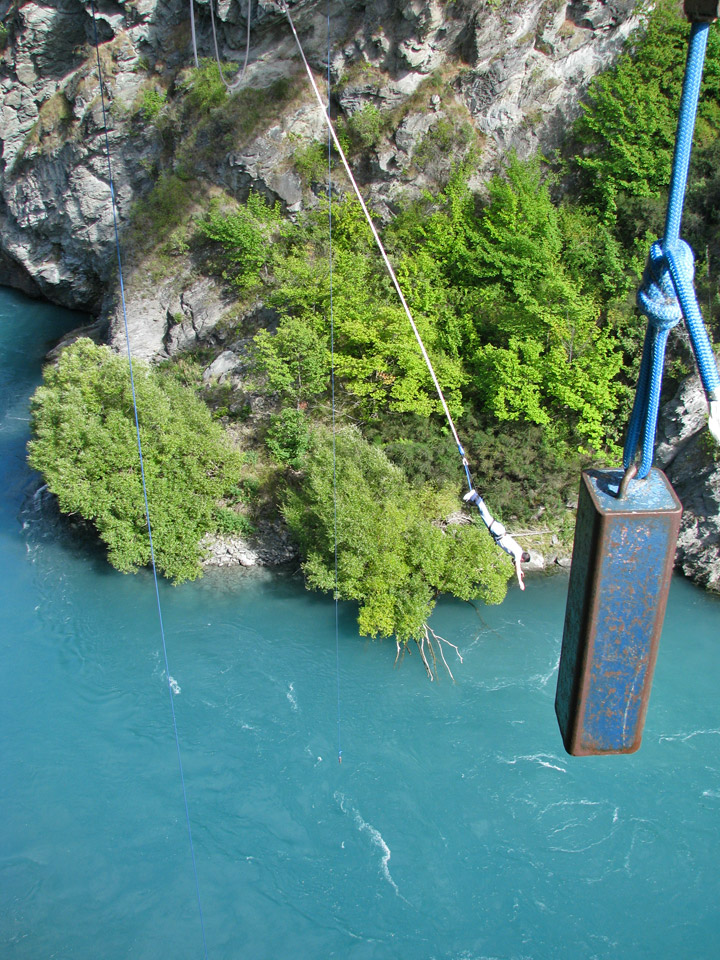 Although there is a certain elegance in using only a simple ankle attachment, accidents in which participants became detached led many commercial operators to use a body harness, if only as a backup for an ankle attachment. Body harnesses are generally derived from climbing equipment rather than parachute equipment. 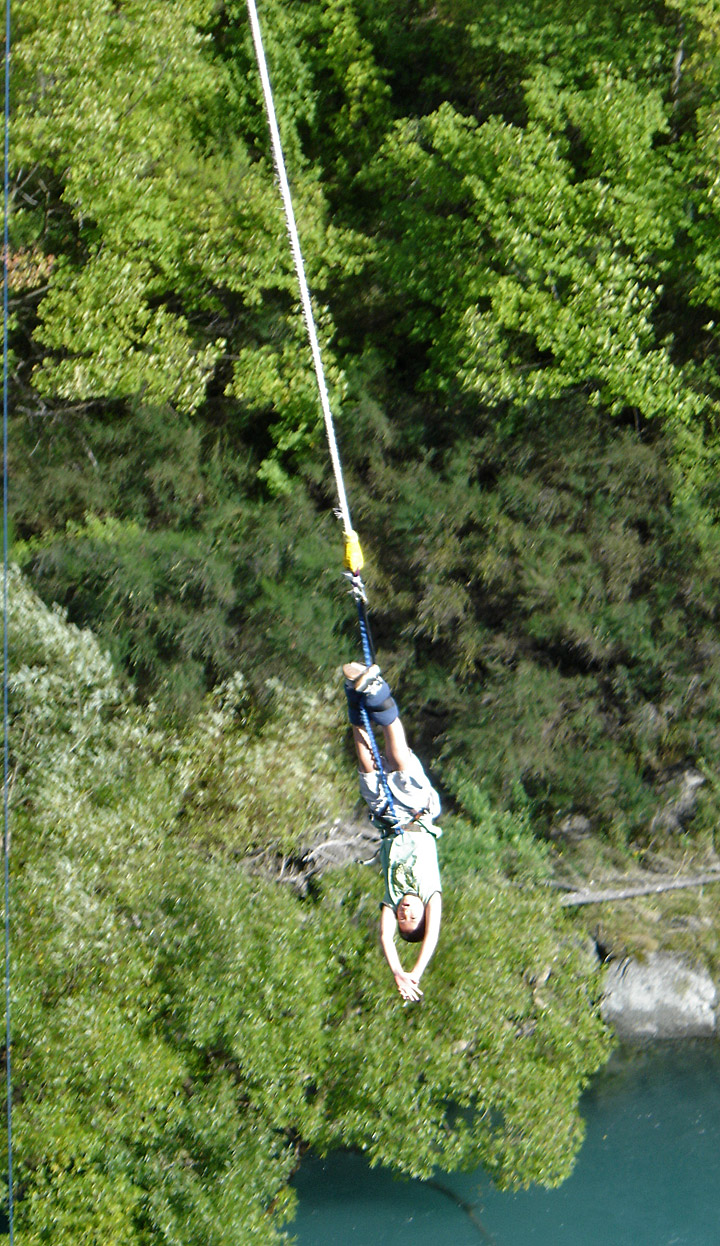 Retrieval methods vary according to the site used. Mobile cranes provide the greatest recovery speed and flexibility, the jumper being lowered rapidly to ground level and detached. Many other mechanisms have been devised according to the nature of the jump platform and the need for a rapid turn-around. 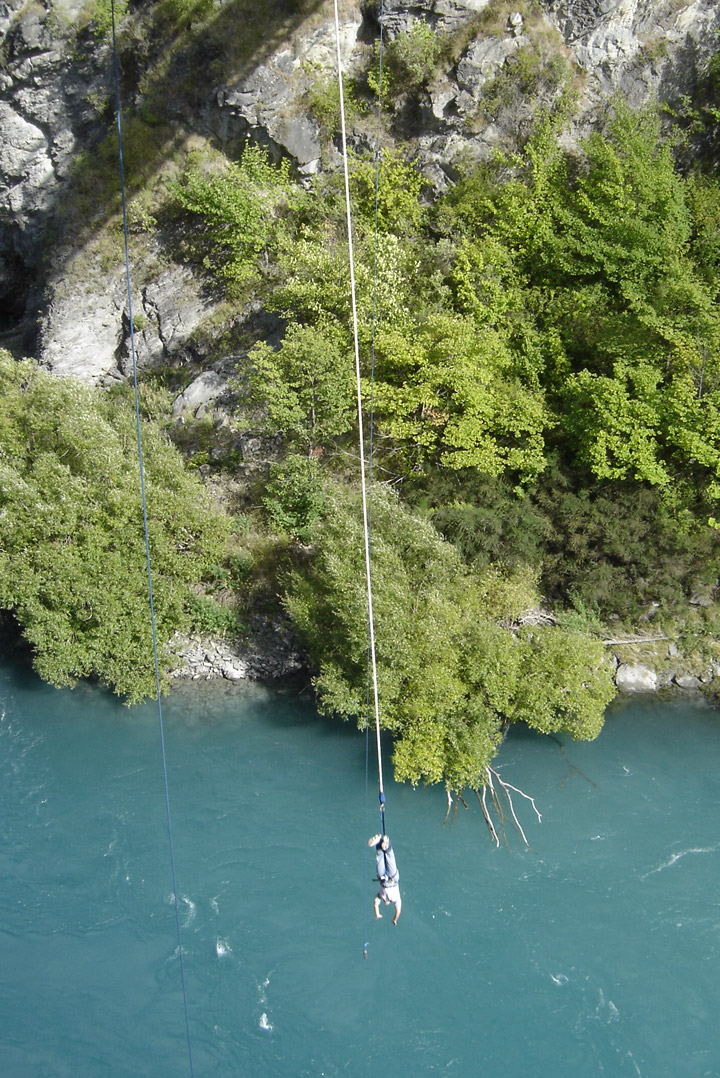 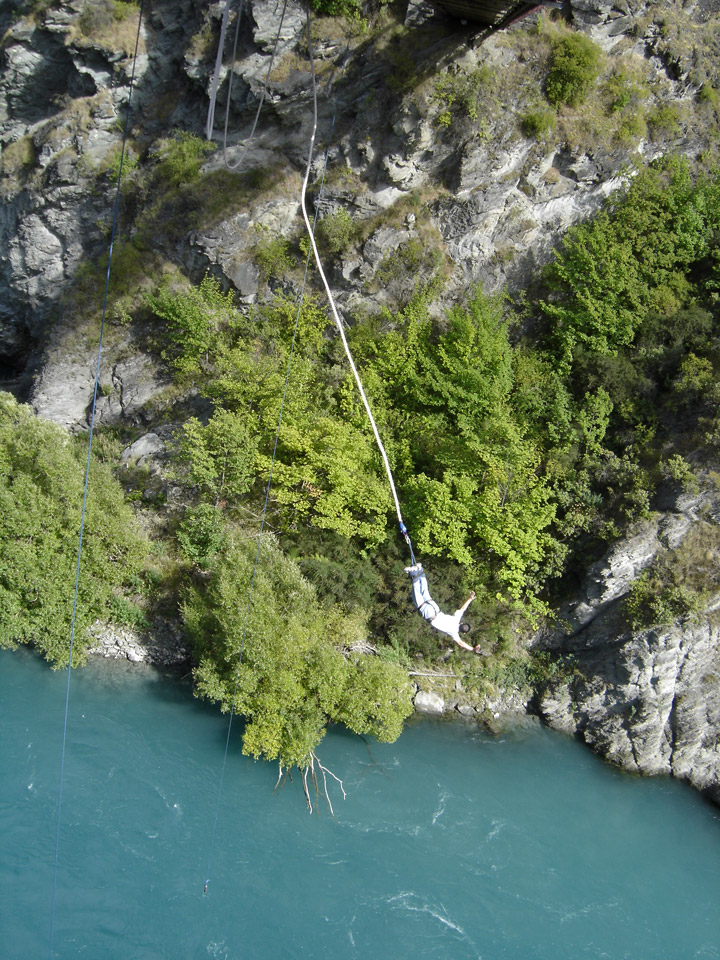 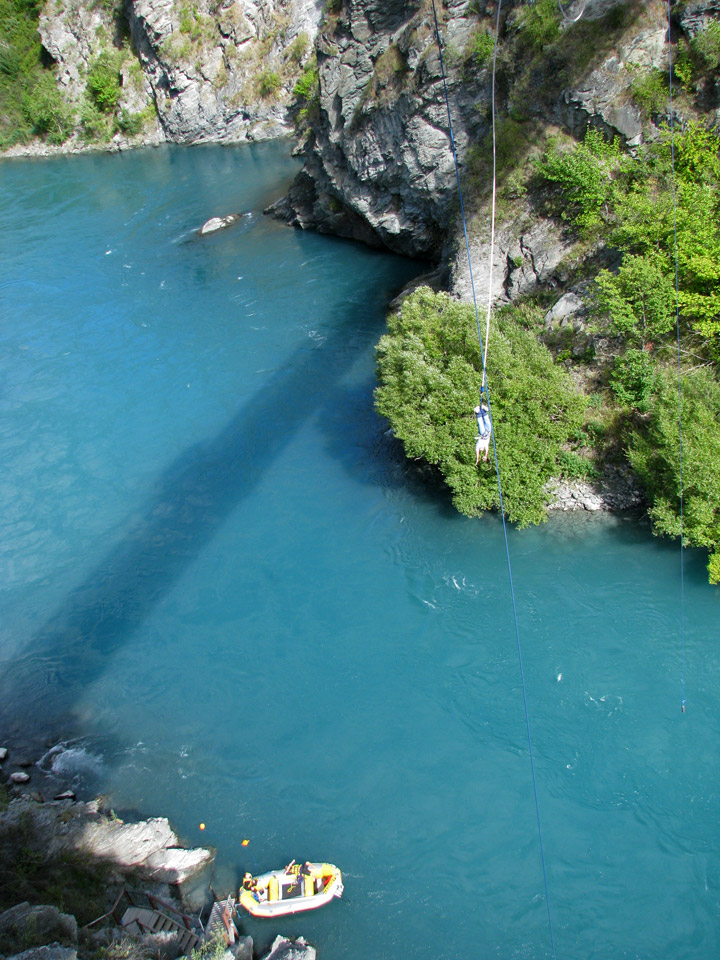 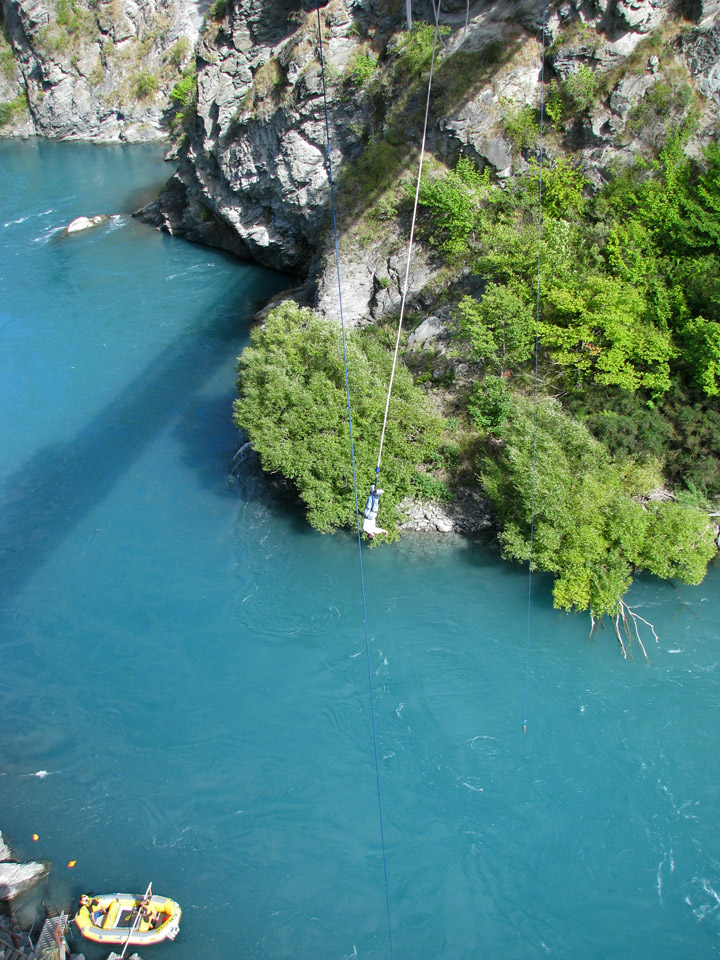 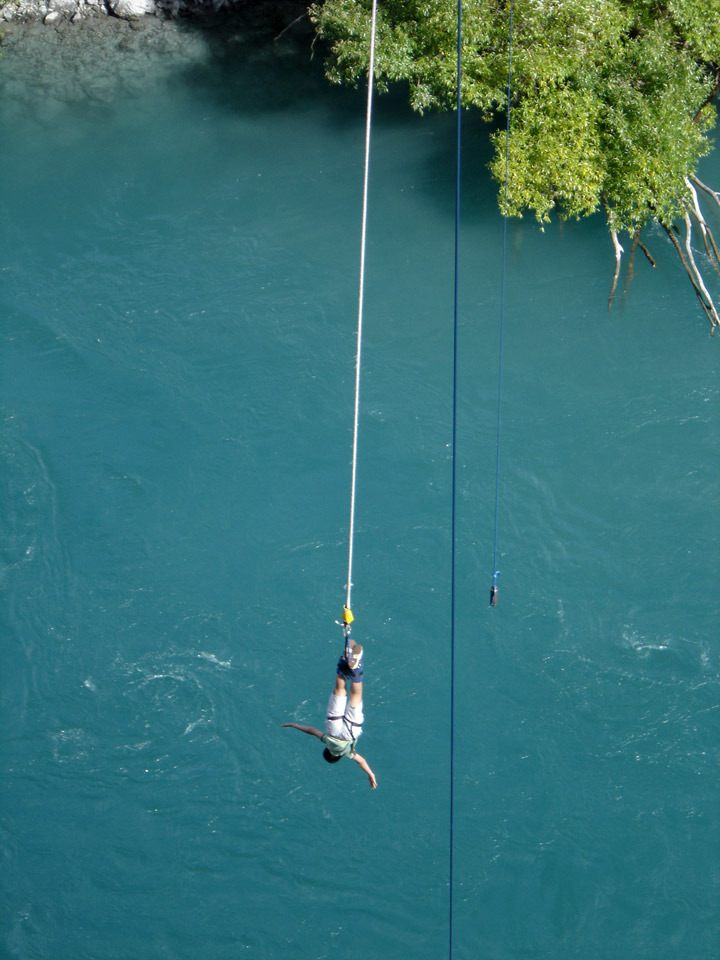 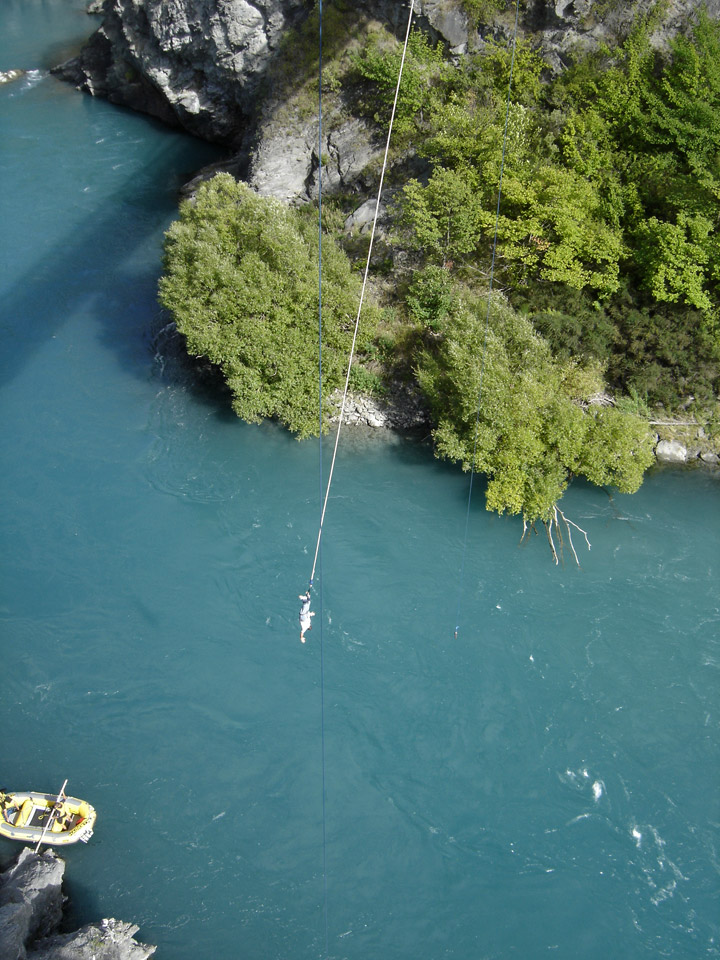 swinging next to the rescue boat 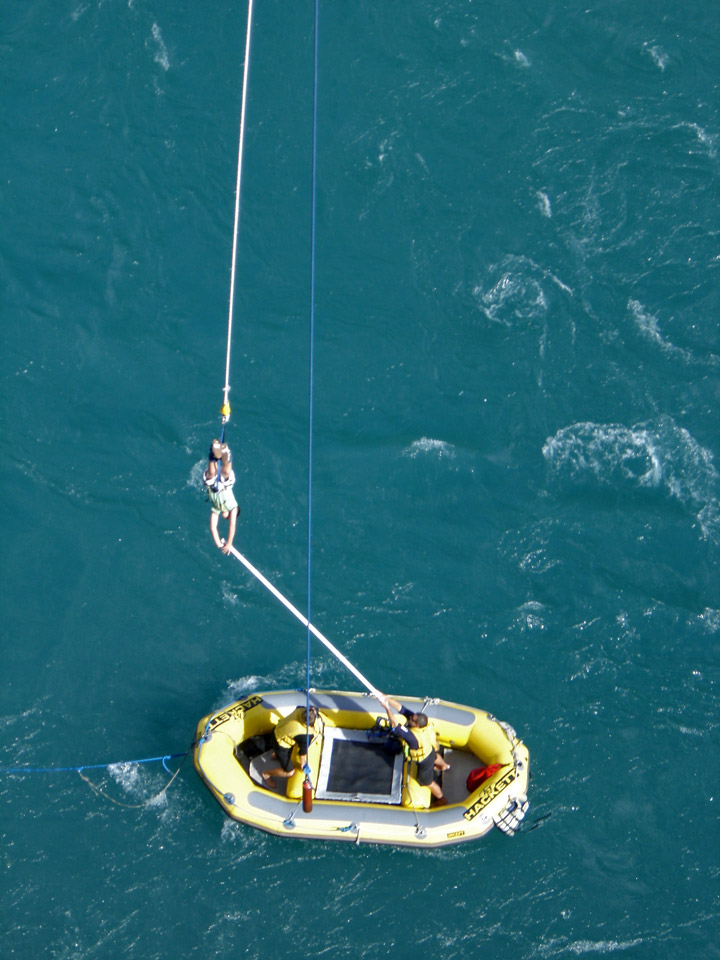 holding onto the rescue pole 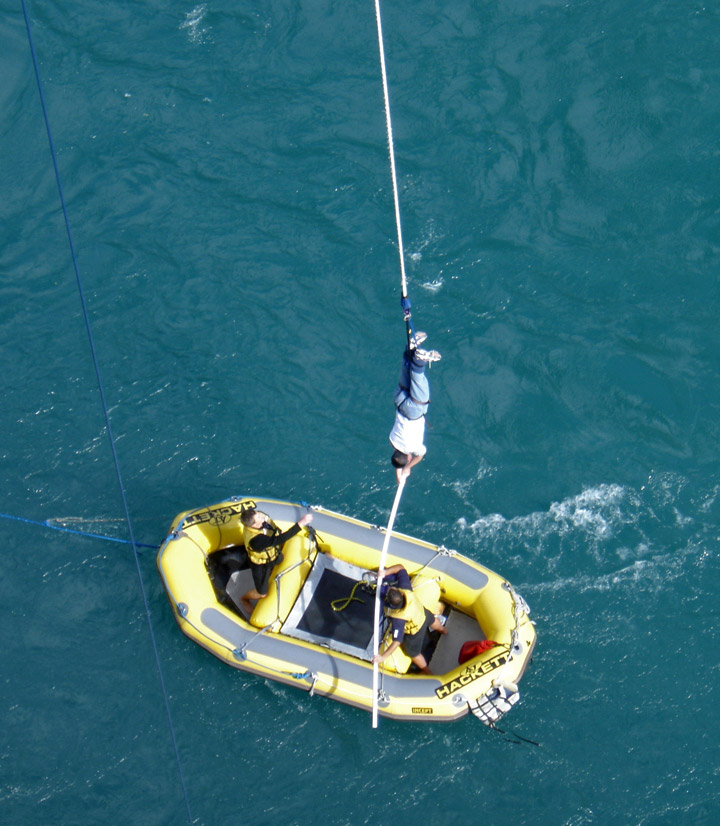 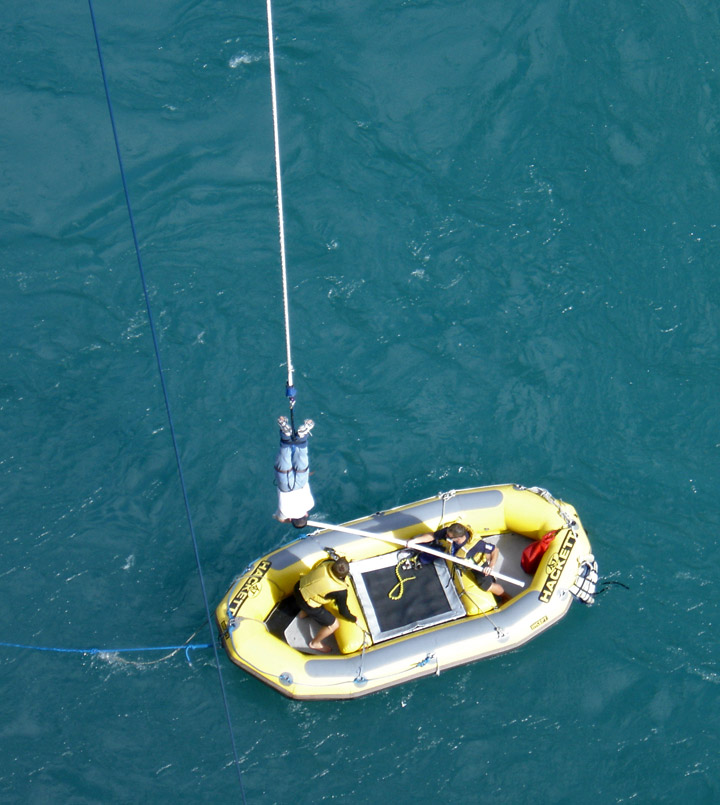 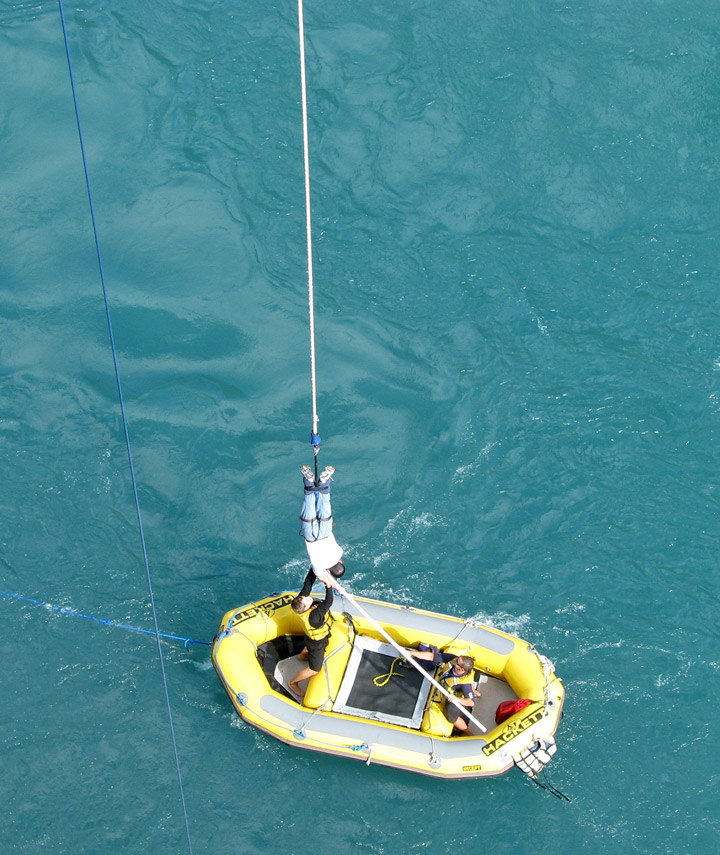 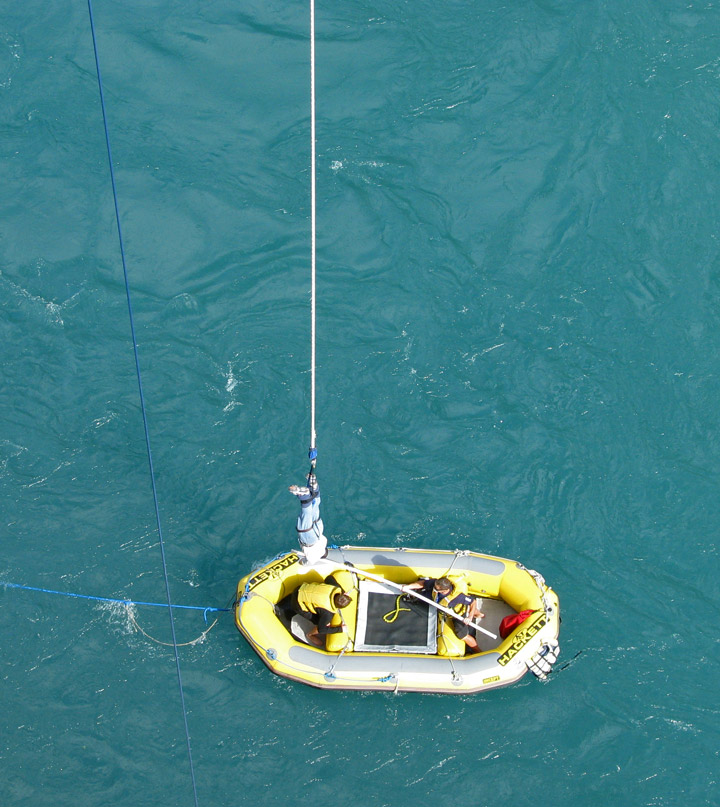 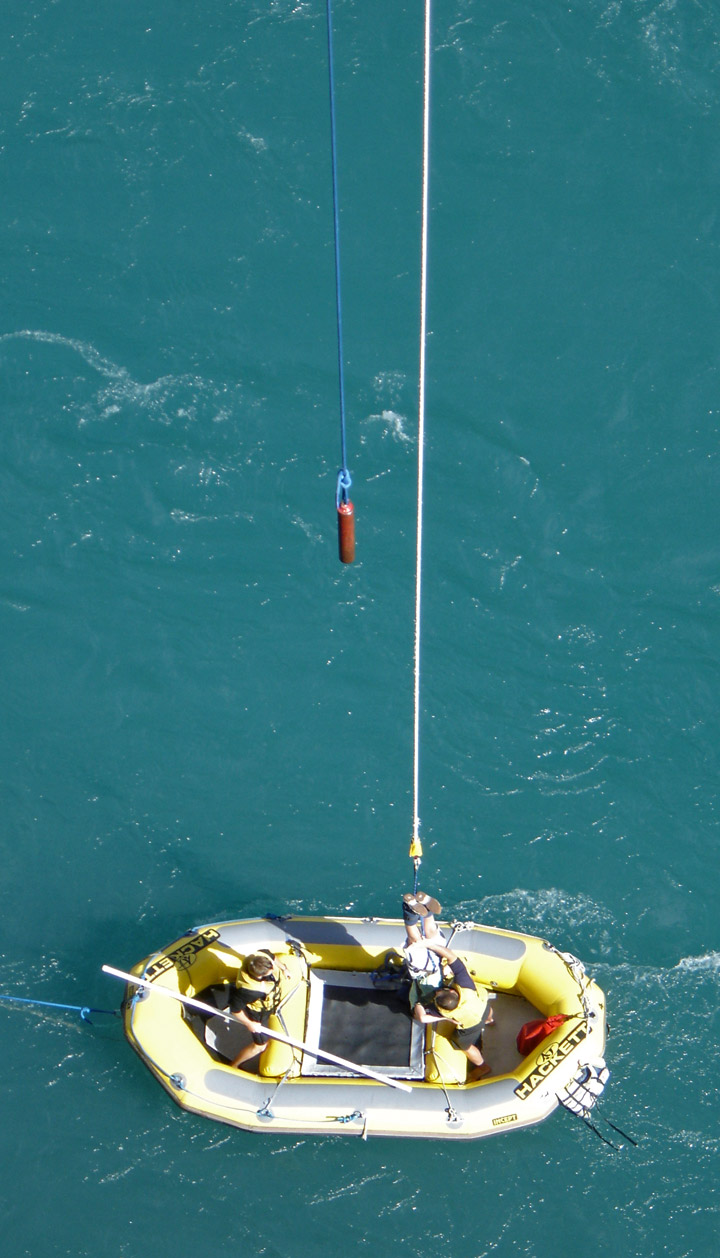 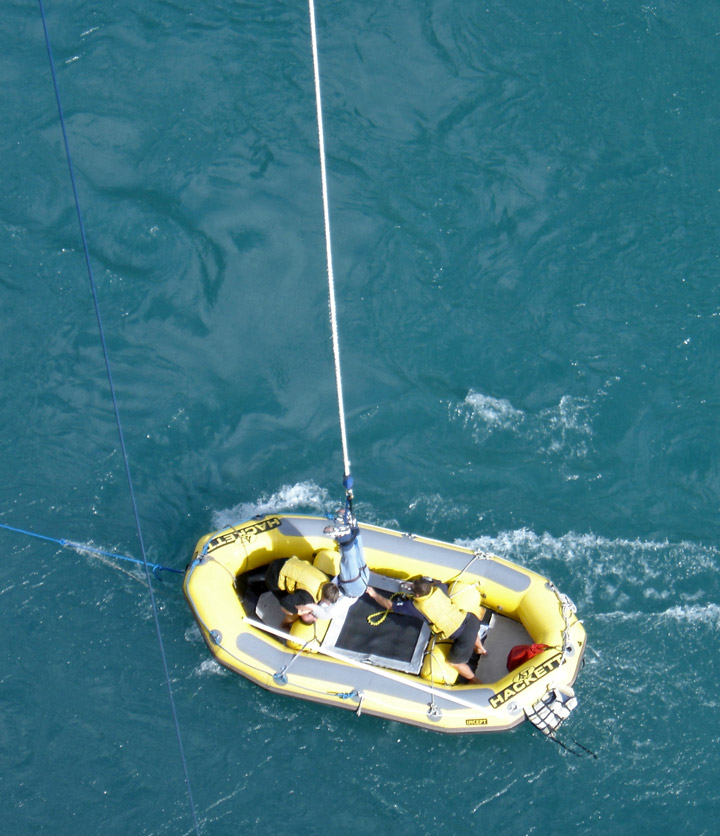 landing in the boat 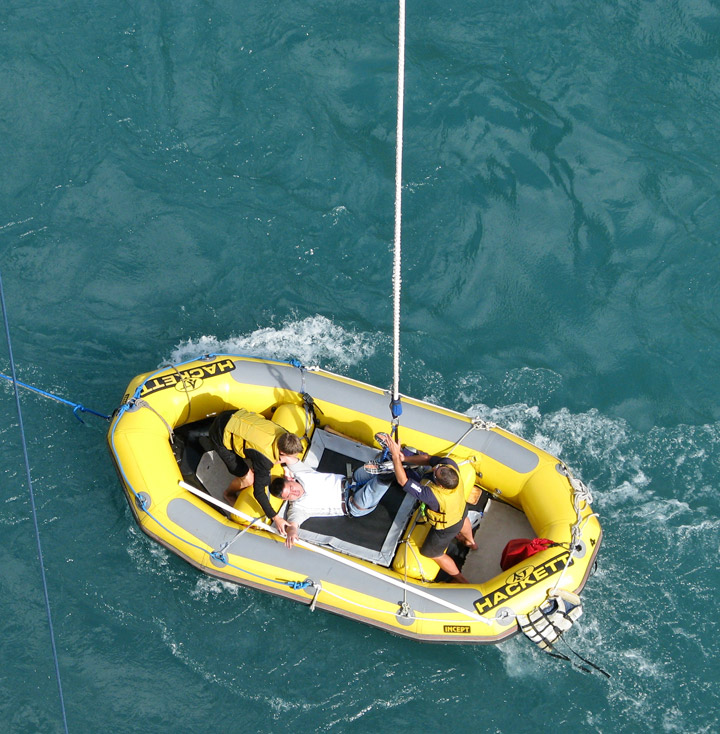 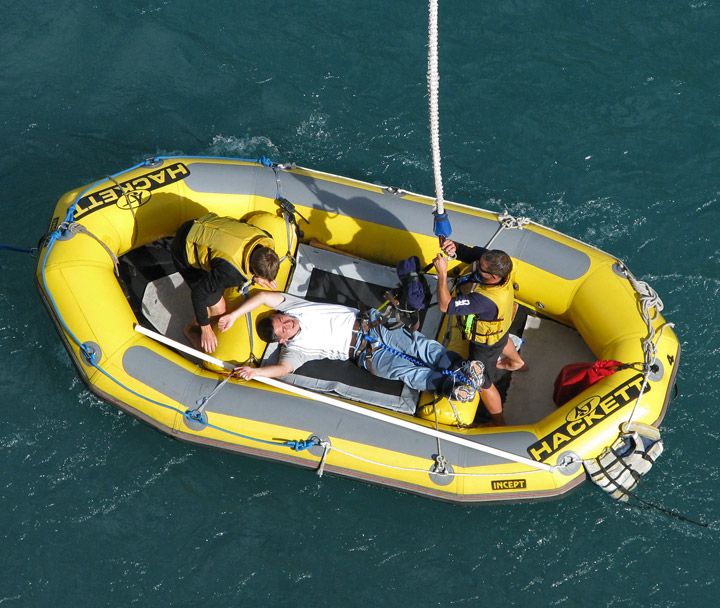