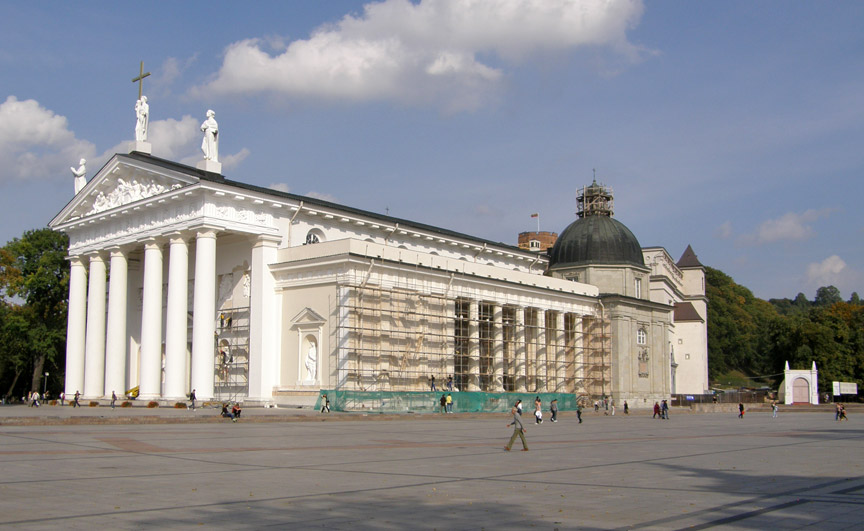 Vilnius Cathedral (Lithuanian: Vilniaus Šv. Stanislovo ir Šv. Vladislovo arkikatedra bazilika) is the main Roman Catholic Cathedral of Lithuania. It is situated in Vilnius' Old Town, just off the Cathedral Square. It is the heart of Lithuania's spiritual life. 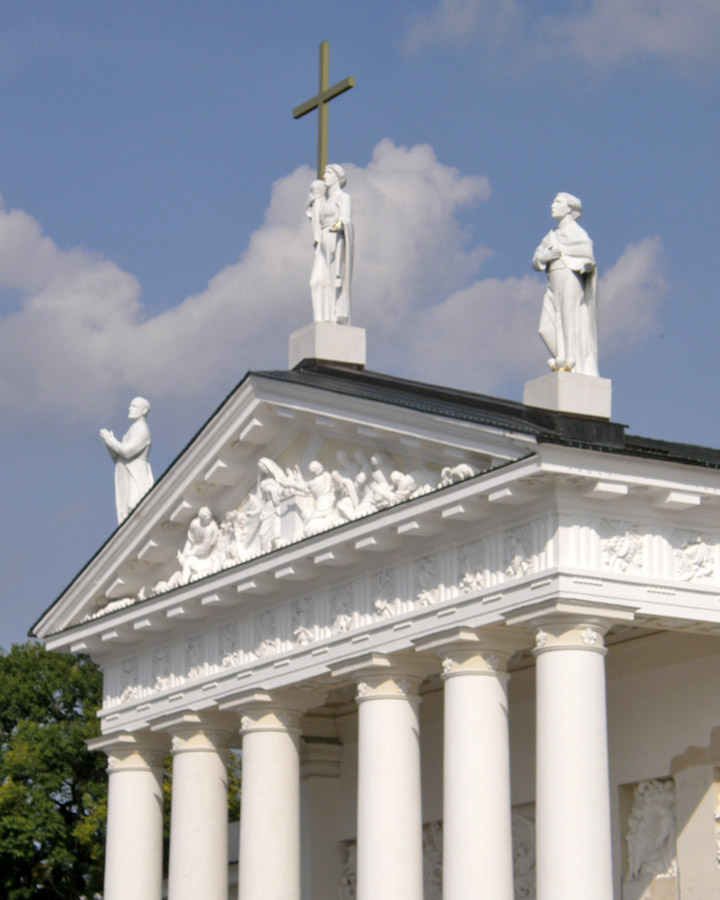 The coronations of the Grand Dukes of Lithuania took place within it. Inside its crypts and catacombs, many famous people, among them Vytautas the Great (1430), his wife Anna (1418), his brother Sigismund (Žygimantas) (1440), cousin Švitrigaila (1452), Saint Casimir (1484), Alexander Jagiellon (1506), two wives of Sigismund Augustus: Elisabeth of Habsburg (1545) and Barbara Radziwiłł (1551), as well as others, are interred. 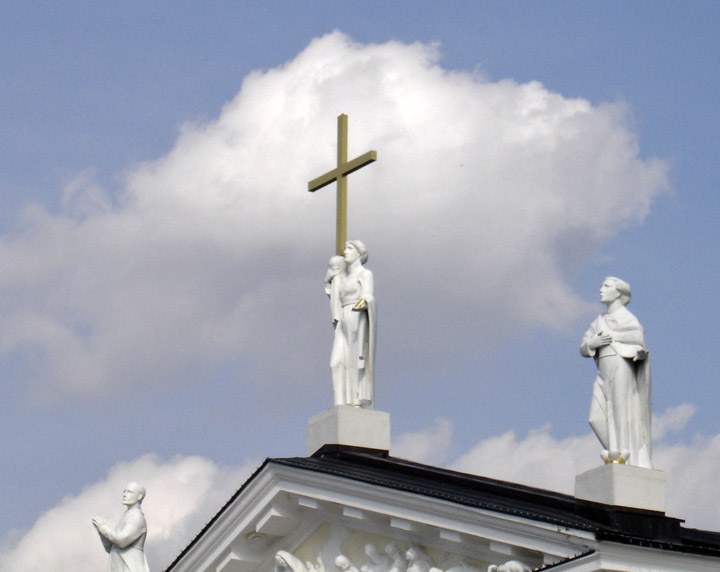 Inside, there are more than forty works of art dating from the 16th through 19th centuries; both frescoes and small and large paintings. During the restoration of the Cathedral, the presumed altars of an alleged pagan temple and the original floor, laid in the days of King Mindaugas baptism, were discovered, in addition to the remains of the cathedral built in 1387. A fresco dating from the end of the 14th century, the oldest known fresco in Lithuania, was found on the wall of one of the underground chapels. 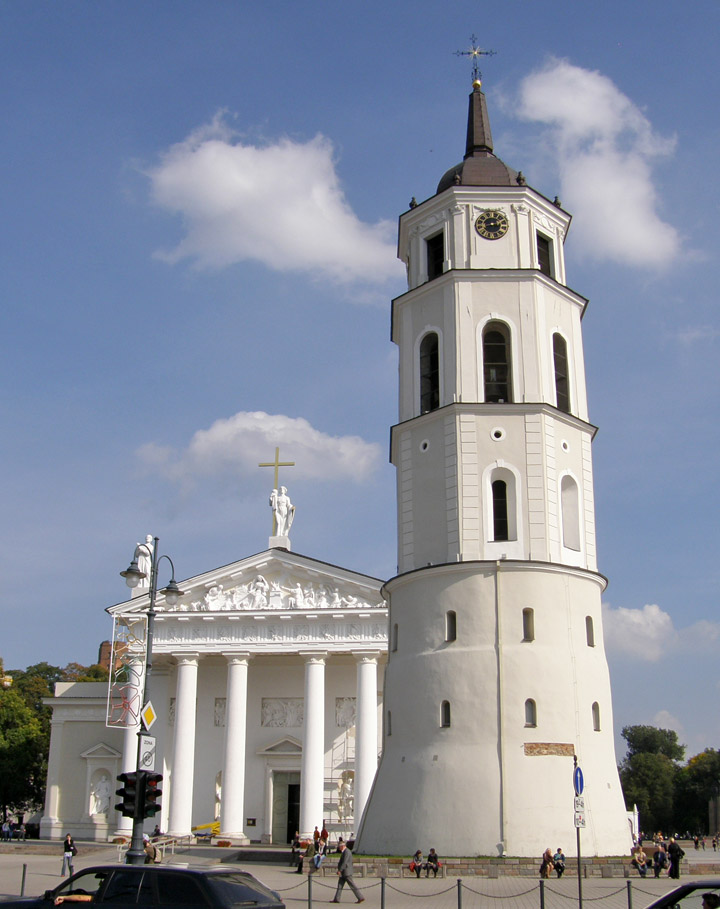 It is believed that in pre-Christian times, the Baltic pagan god Perkūnas was worshiped at this location. The Lithuanian King Mindaugas built the original cathedral in 1251 after his conversion to Christianity. After his death in 1263, it again became a place of pagan worship.

In 1387, the year in which Lithuania was officially converted to Christianity, a second Gothic style Cathedral with five chapels was built. The Cathedral burnt down in 1419. In its place Vytautas built a larger Gothic Cathedral. In 1522, the Cathedral was renovated, and the bell tower was built on top of the Lower Castle defensive tower. After the fire of 1530, it was rebuilt again and between 1534 - 1557 more chapels and the crypts were added. The Cathedral acquired architectural features associated with the Renaissance. 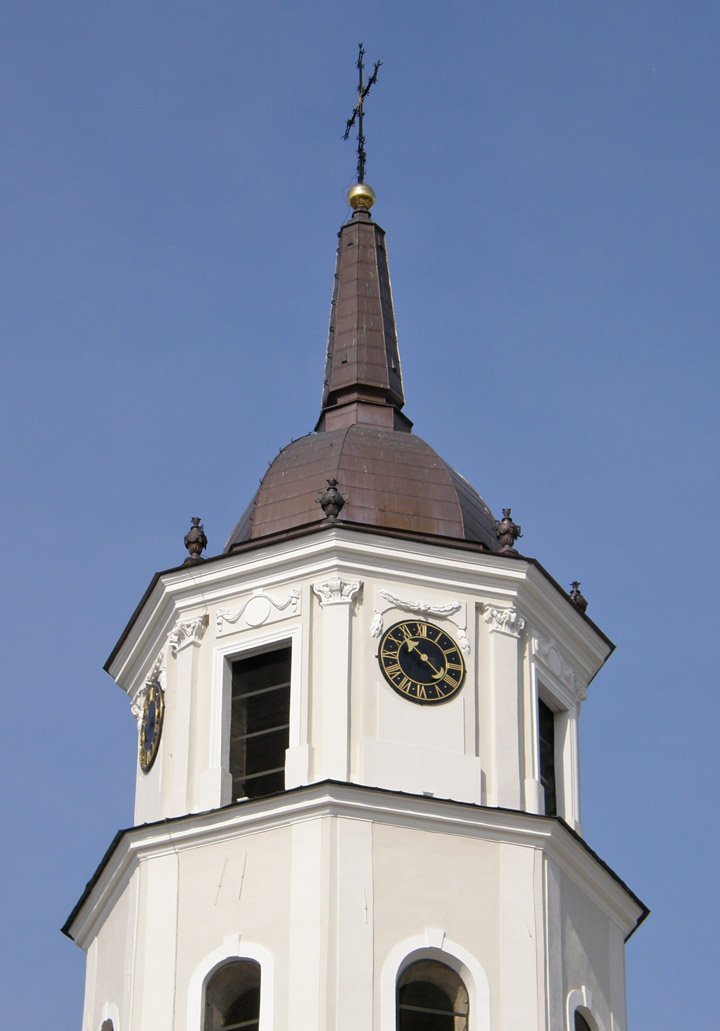 In 1529, Sigismund Augustus, was crowned Grand Duke of Lithuania in the Cathedral. After the fire of 1610, it was rebuilt again, and the two front towers were added. The Cathedral was damaged during the war of 1655. It was renovated and decorated several more times. 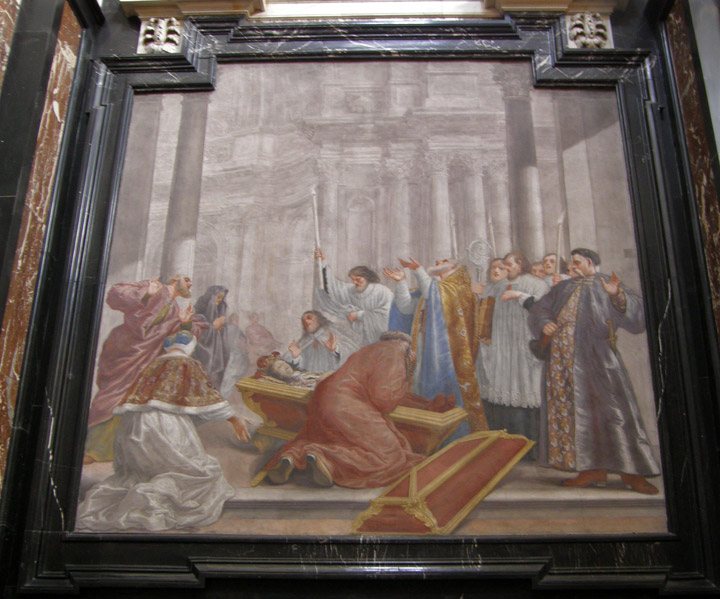 Between 1623 - 1636, at the initiative of Sigismund III Vasa, the Baroque style St. Casimir chapel was built of Swedish sandstone. Its interior was reconstructed in 1691-1692 and decorated with frescoes by Michelangelo Palloni, the altar and stuccowork by Pietro Perti. 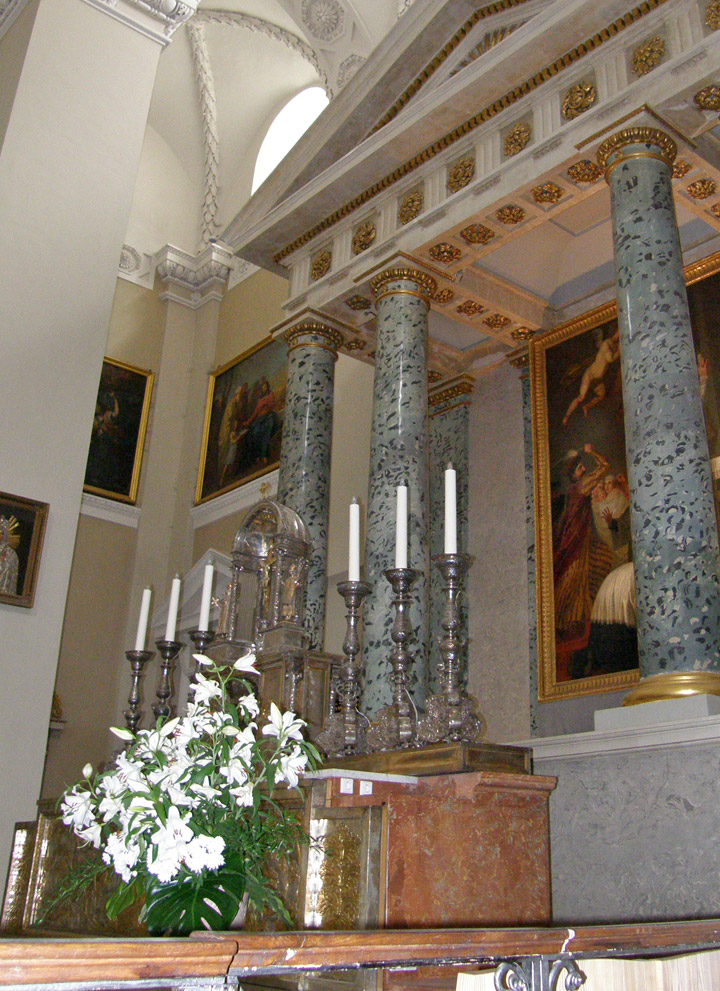 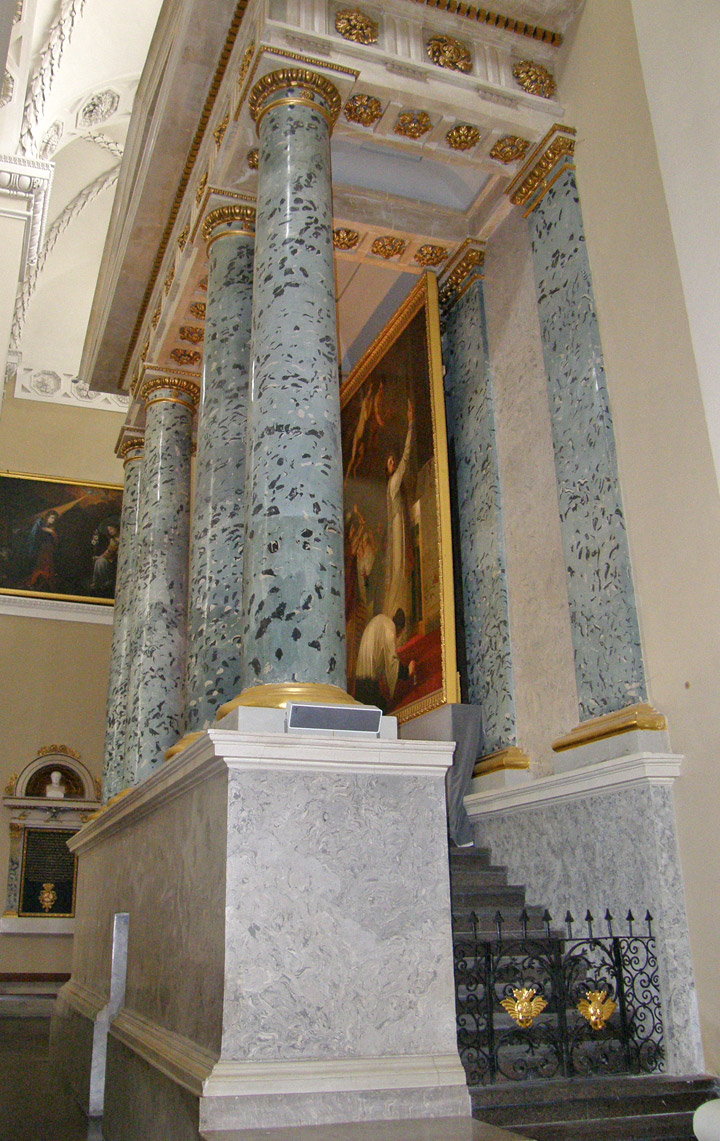 After the damage of 1769, Bishop of Vilnius Ignacy Jakub Massalski ordered the reconstruction of the Cathedral. The works started in 1779 and were completed in 1783, and the interior was completed in 1801. The Cathedral was reconstructed to its present appearance according to the design of Laurynas Gucevičius in the Neoclassical style; the church acquired its strict quadrangular shape and the plan inherent to local public buildings. Some scholars point to the architectural resemblance of the cathedral to the works of Andrea Palladio or see the influence of Gucevičius' tutor Claude Nicolas Ledoux. The influence of the Palladian architecture is evident in side facades of the building. The lack of 'purity' of the Classical architecture due to incorporation of Baroque style sculptures and other elements was later criticised by academical architects, notably Karol Podczaszyński. 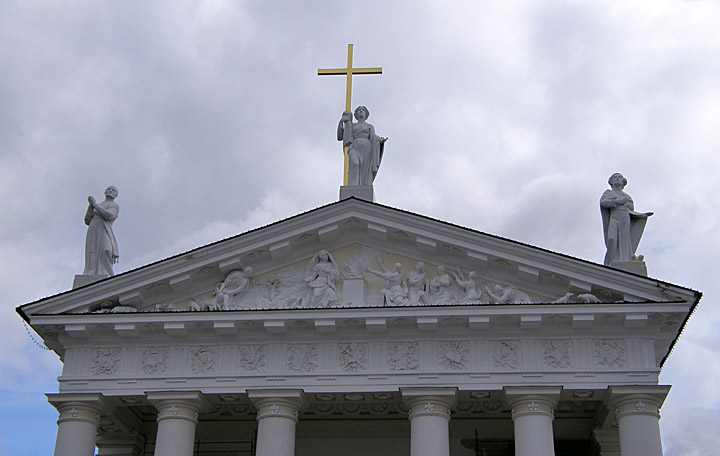 Between 1786 and 1792 three sculptures by Kazimierz Jelski were placed on roof of the Cathedral - Saint Casimir on the south side, Saint Stanislaus on the north and Saint Helena in the centre. These sculptures were removed in 1950 and restored in 1997. Presumably the sculpture of St. Casimir originally symbolised Lithuania, that of St. Stanislaus symbolised Poland, and that of St. Helena symbolised Russia's dominance. 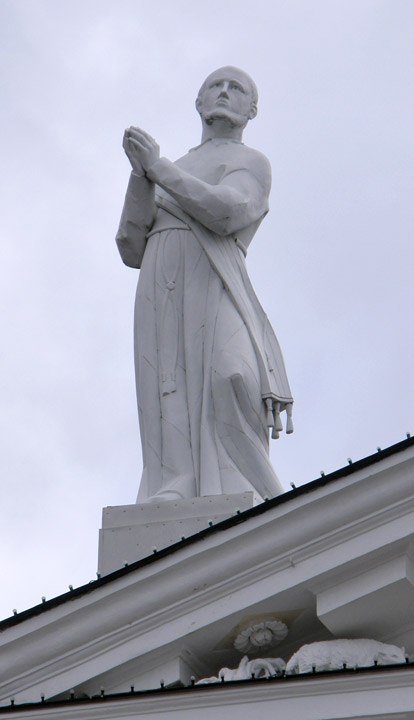 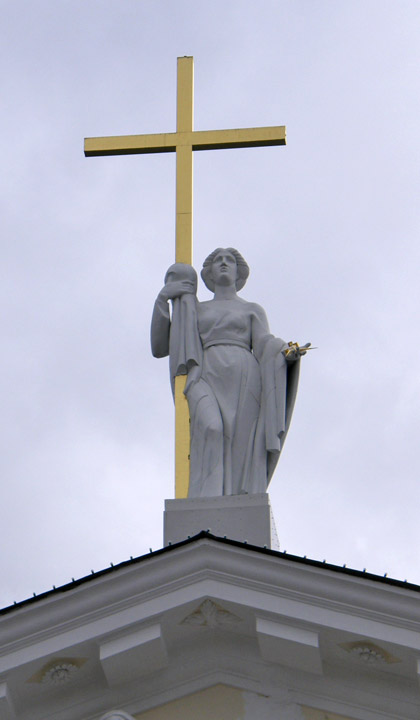 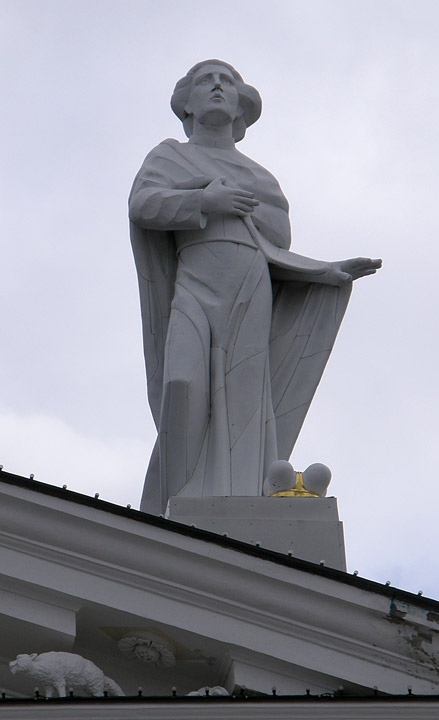 In 2002 work officially began to rebuild the Lithuanian Royal Palace behind Cathedral. The newly erected palace building will considerably alter the view of the Cathedral. The Cathedral and the belfry have been renovated in 2006 and 2007. 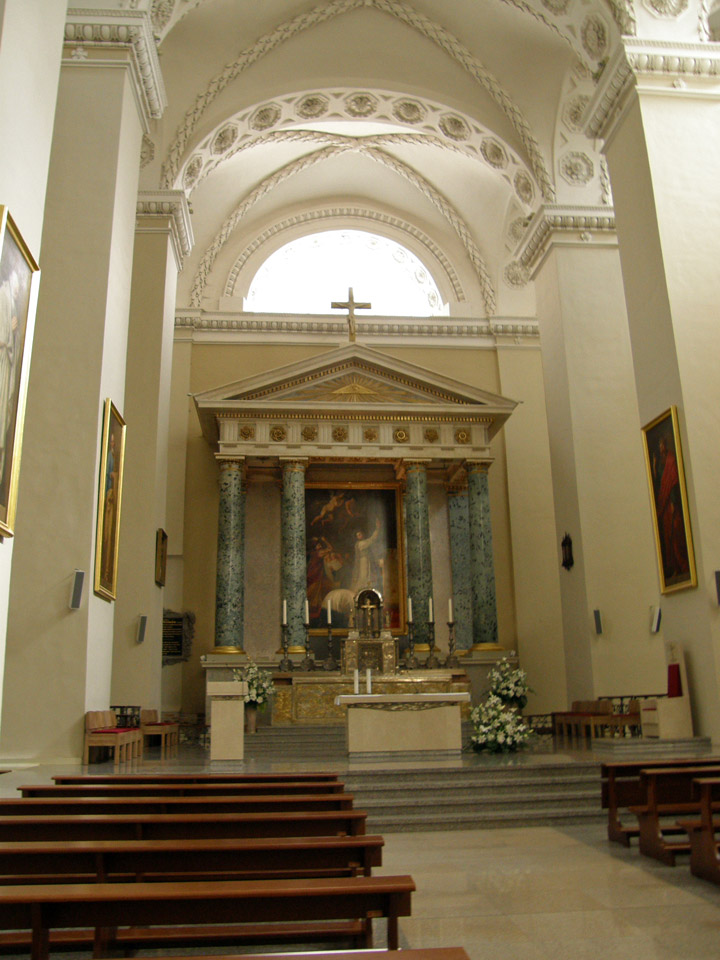 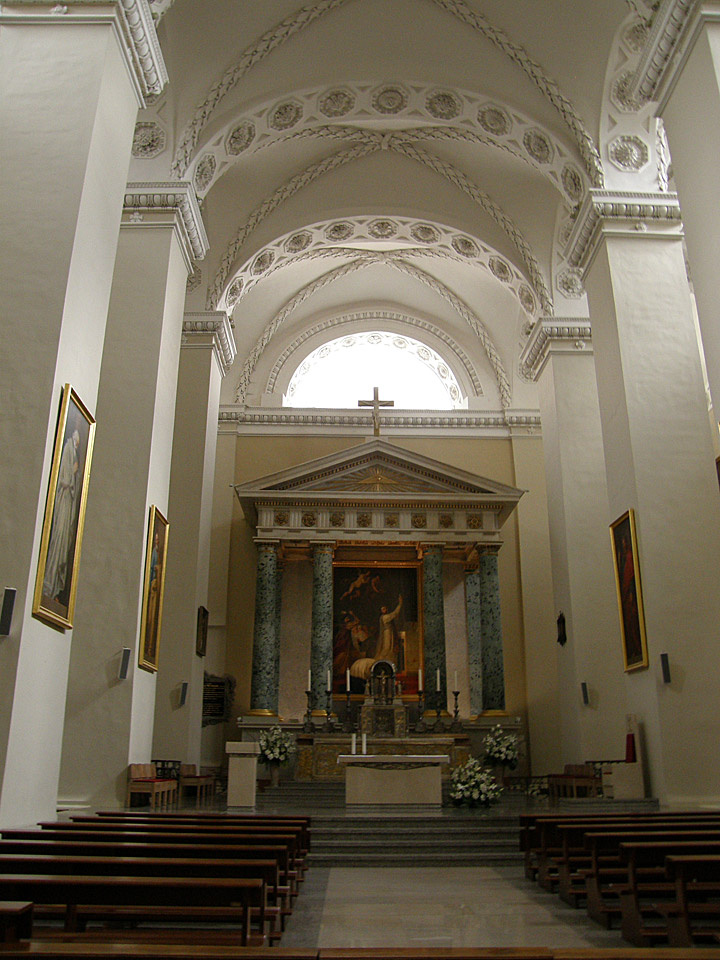 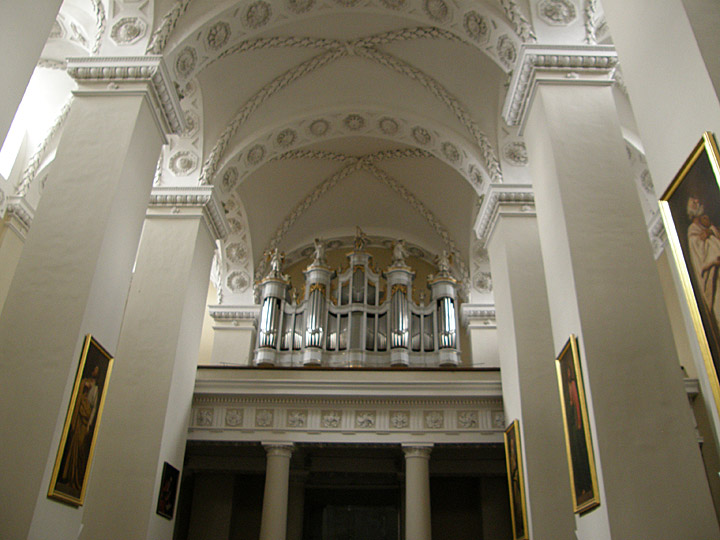 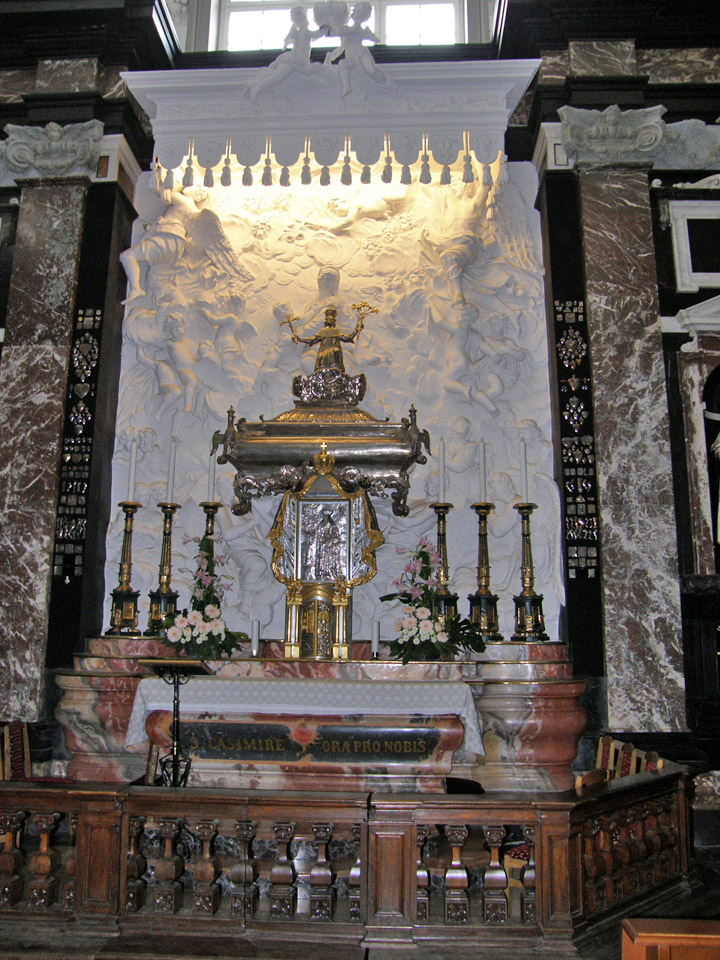 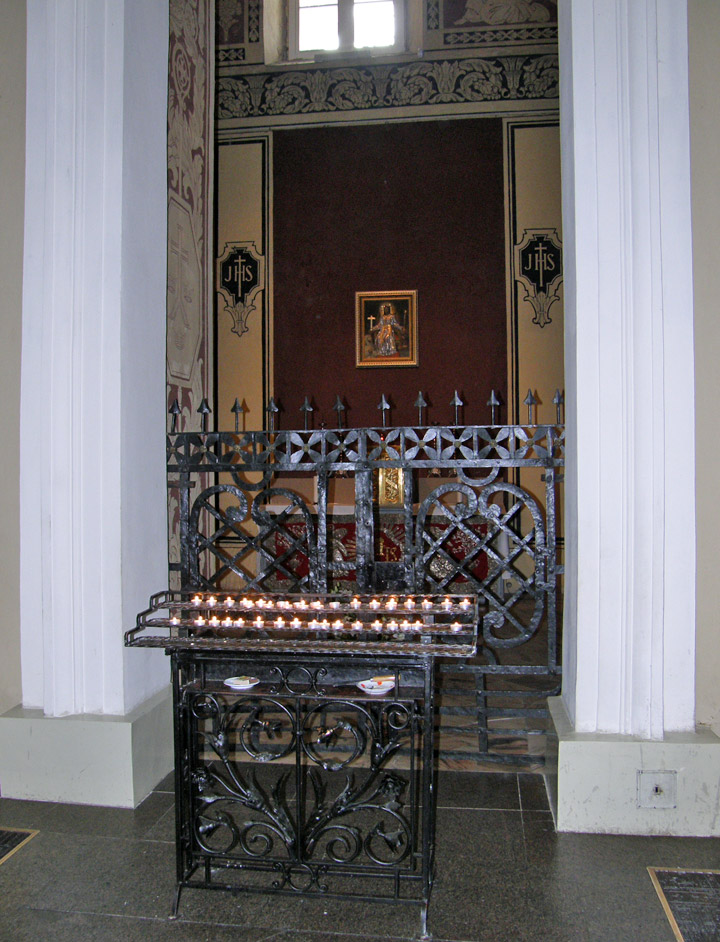 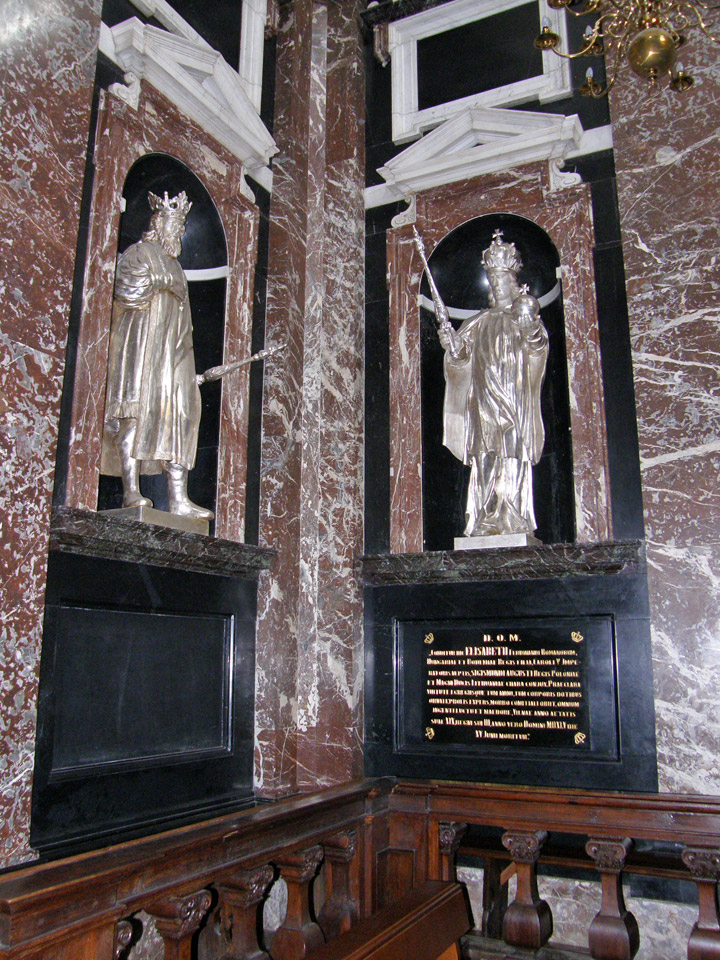 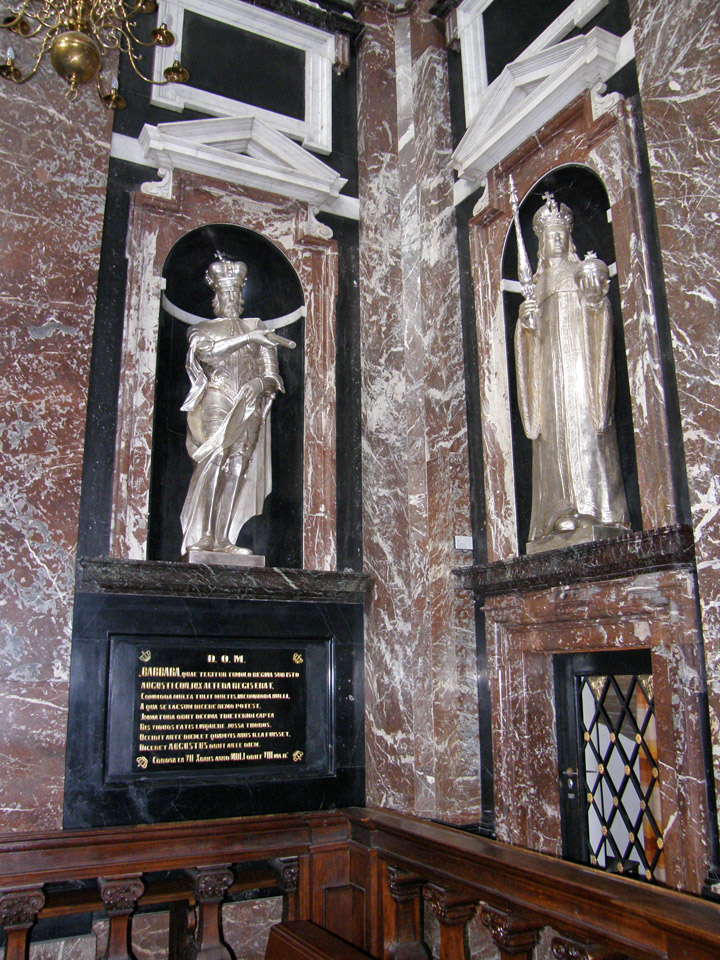 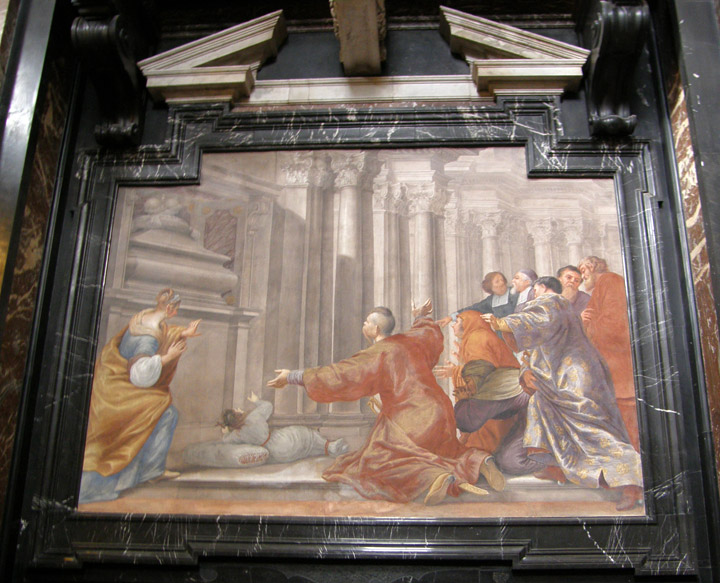 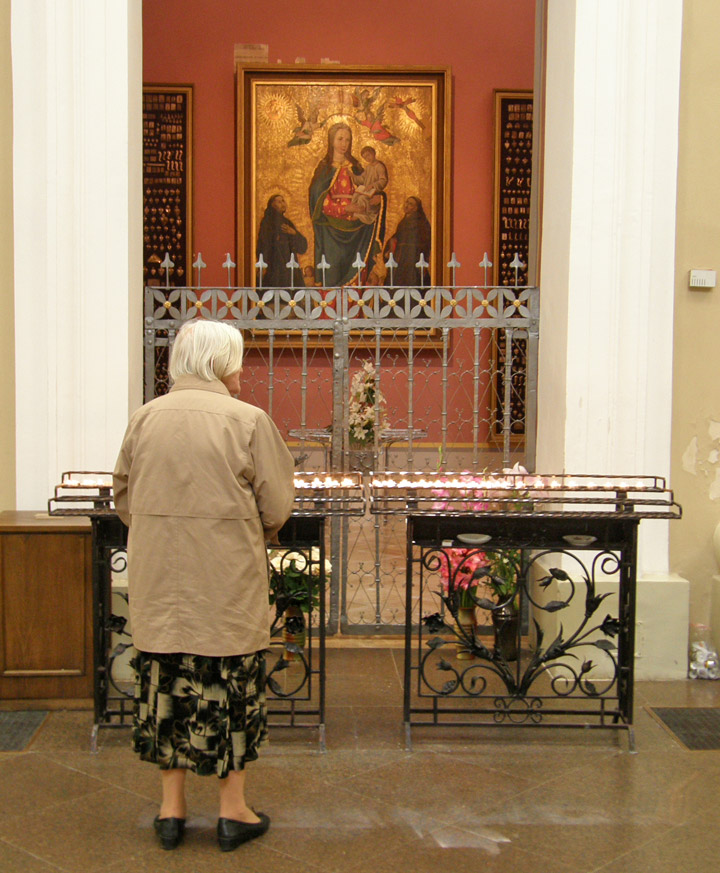 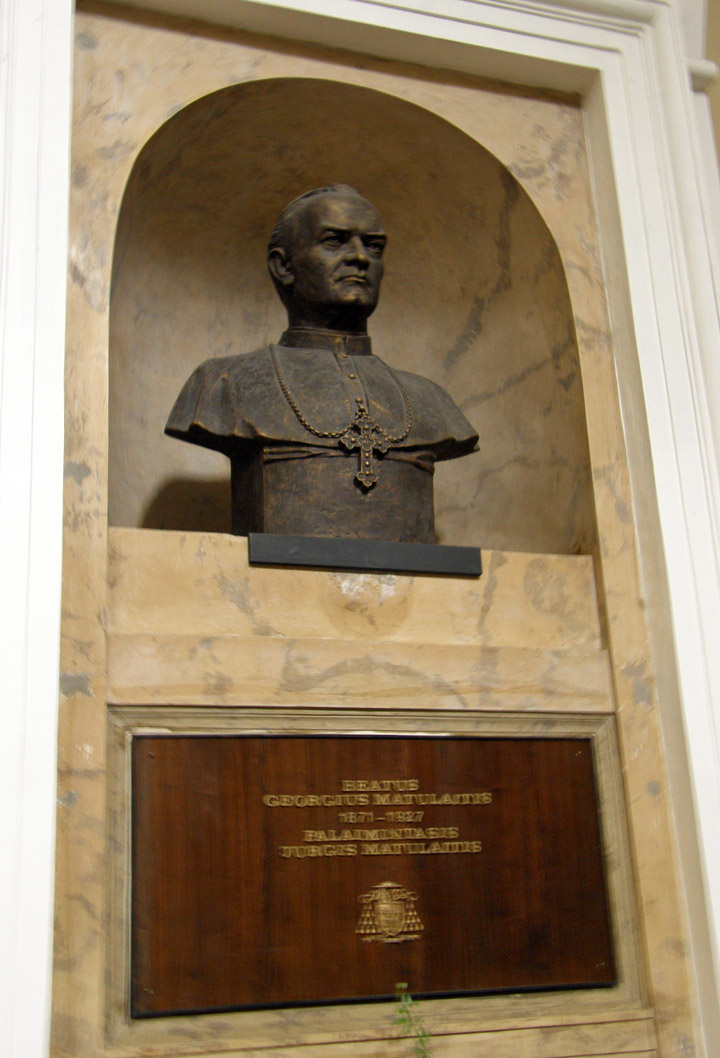 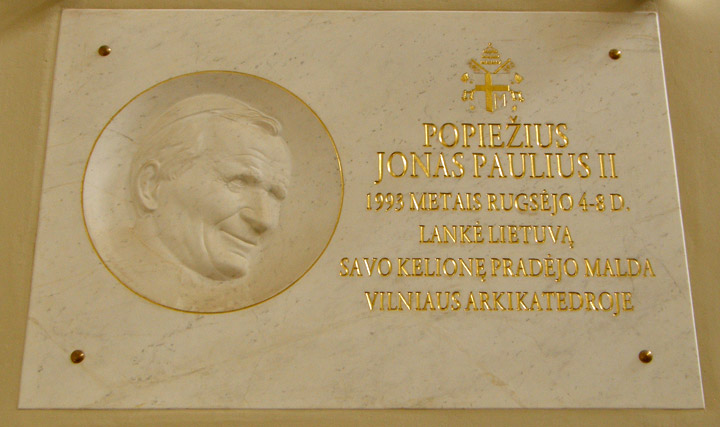 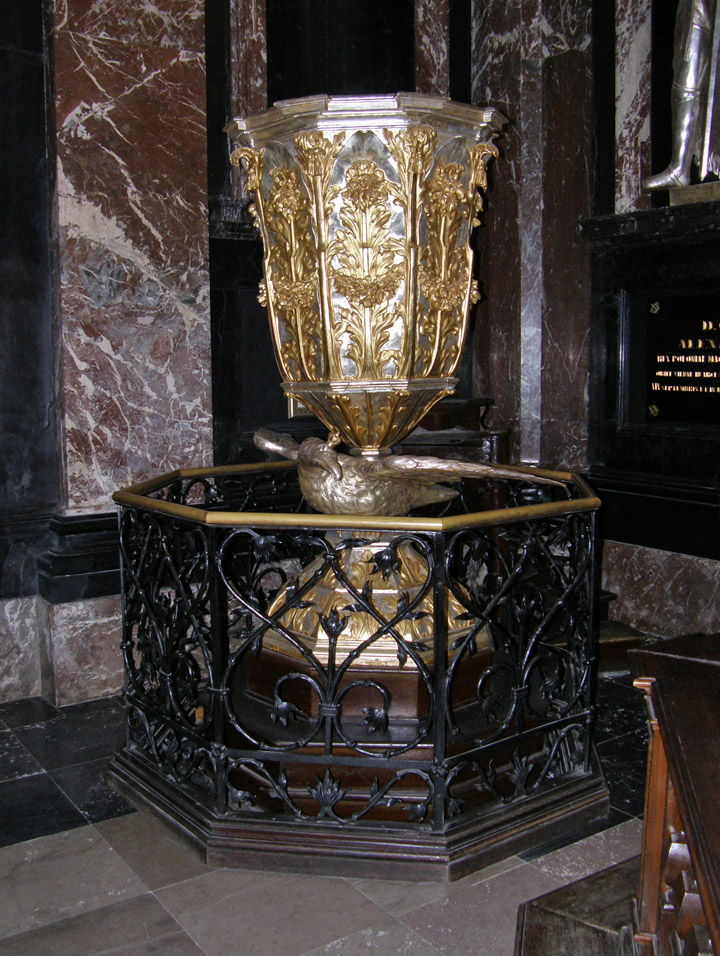 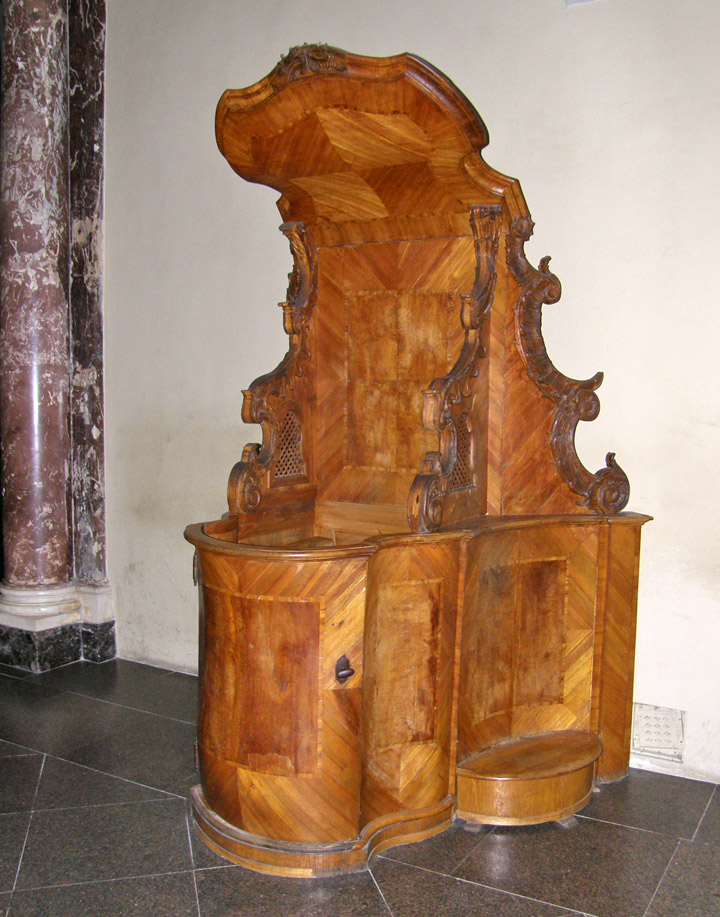 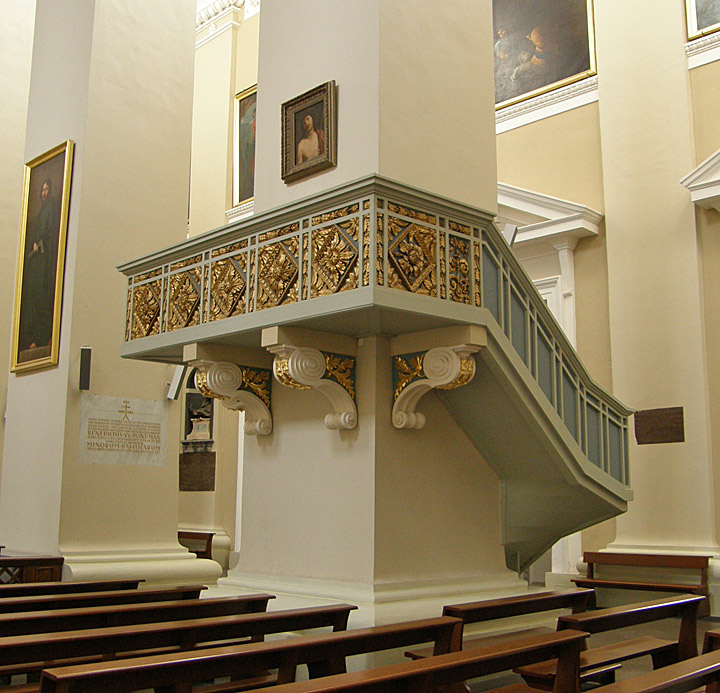 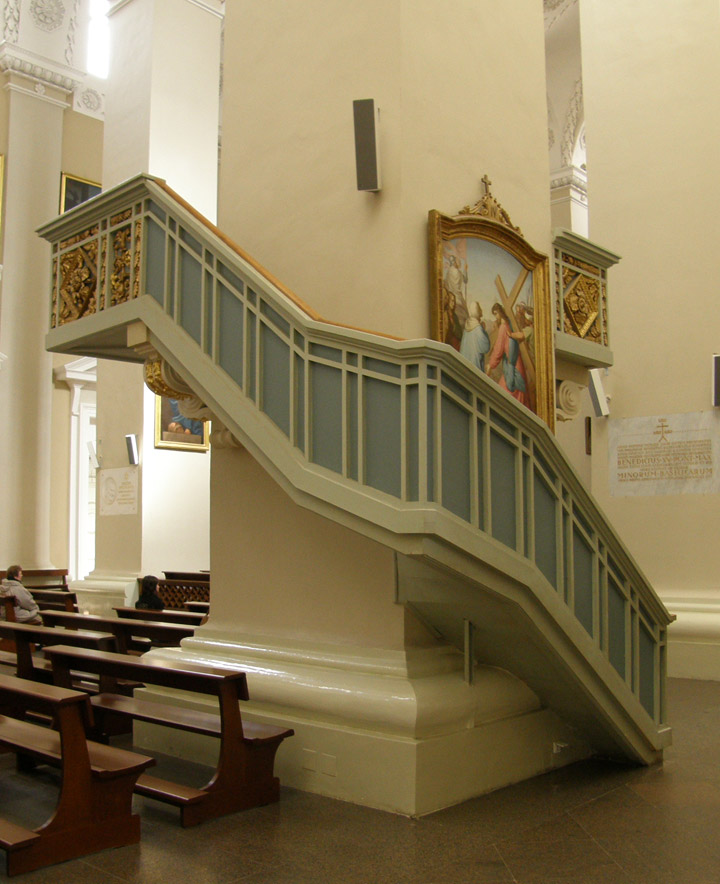 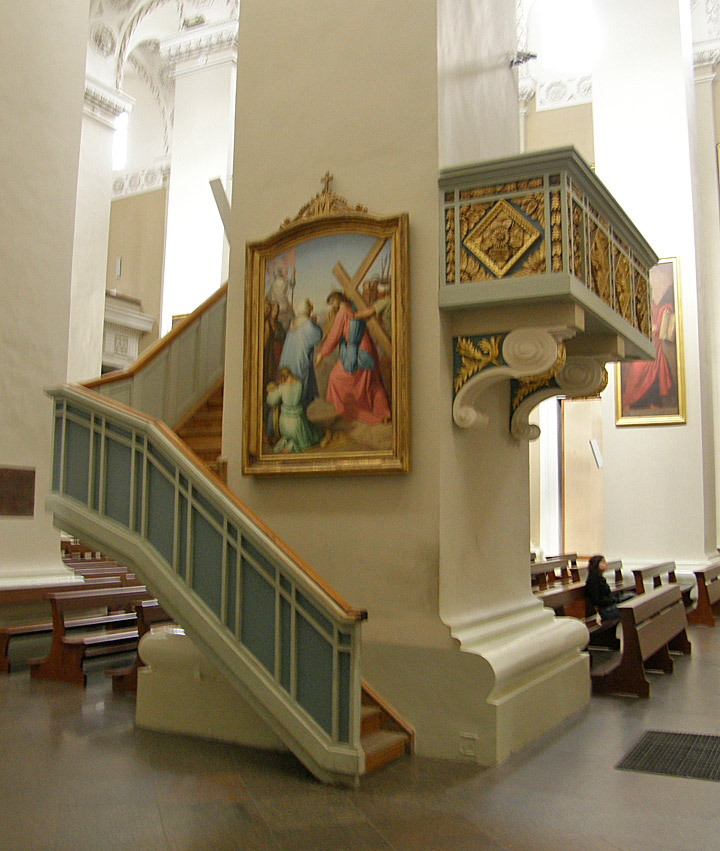