, also Rapa Nui (Spanish Isla de Pascua), triangular-shaped island belonging to Chile, located in the South Pacific Ocean, 3,700 km (2,300 mi) west of the Chilean coast. The island is formed by three extinct volcanoes. Swept by strong trade winds, the area is warm throughout the year. Indigenous vegetation consists mainly of grasses. Potatoes, sugarcane, taro roots, tobacco, and tropical fruits are grown in the fertile soil. The prime source of fresh water is the rain that gathers in the crater lakes. In 1722 several thousand Polynesians inhabited the island, but disease and raids by slave traders reduced the number to fewer than 200 by the late 19th century. Some Polynesians and Chileans have intermarried. 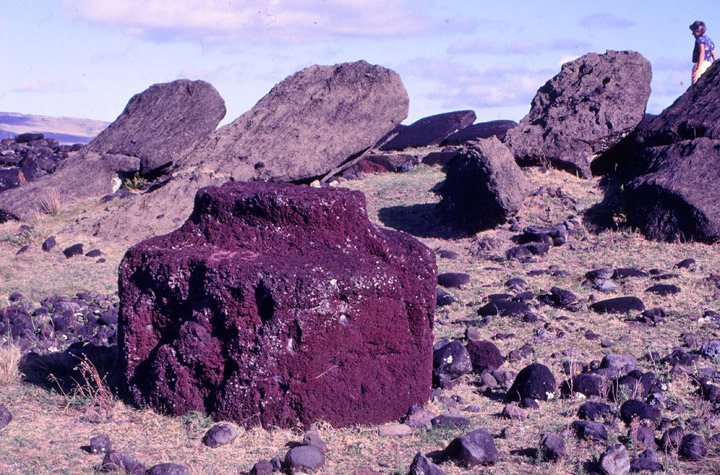 red rock was on top of a megalith (figure's crown)

Pukao are the hats or topknots formerly placed on top of some moai statues from Rapa Nui (Easter island).

They are cylindrical in shape with a dent on the underside to fit on the head of the moai and a boss or knot on top. They fitted onto the moai in such a way that the pukao protruded forwards. Their size varies in proportion to the moai they were on but they can be up to 8 foot tall and 8 feet in diameter.

They were all carved from a very light red volcanic stone scoria, which was quarried from a single source at Puna Pau. The pukao was balanced as a separate piece on top of the head of a moai. It is not known how they were raised and placed but theories include them being raised with the statue or placed after the statue was erected. Pukao may have represented dressed hair or headdresses of red feathers worn by chiefs throughout Polynesia. To date, about 100 pukao have been documented archaeologically, but only at ahu with fallen statues or at the source quarry.

The island was named by a Dutch explorer who landed here on Easter Day in 1722. The Chilean government annexed the island in 1888. An area on the western coast is reserved by the government for the indigenous population; the remainder is used as grazing land for sheep and cattle. 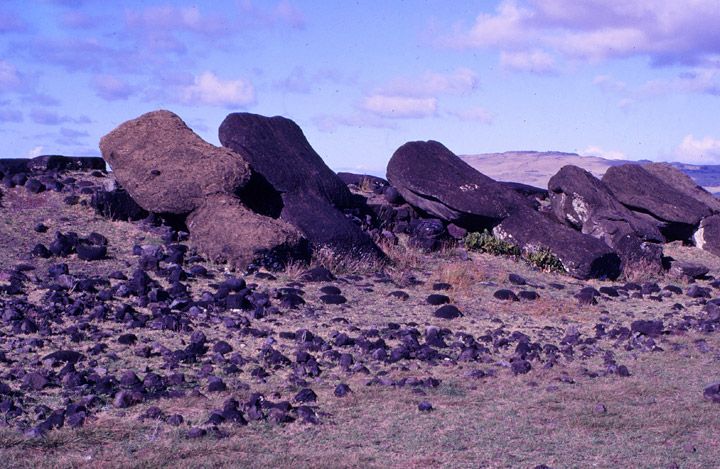 Easter Island is of considerable archaeological importance. It is the richest site of the megaliths of the Pacific island groups and the only source of evidence of a form of writing in Polynesia. 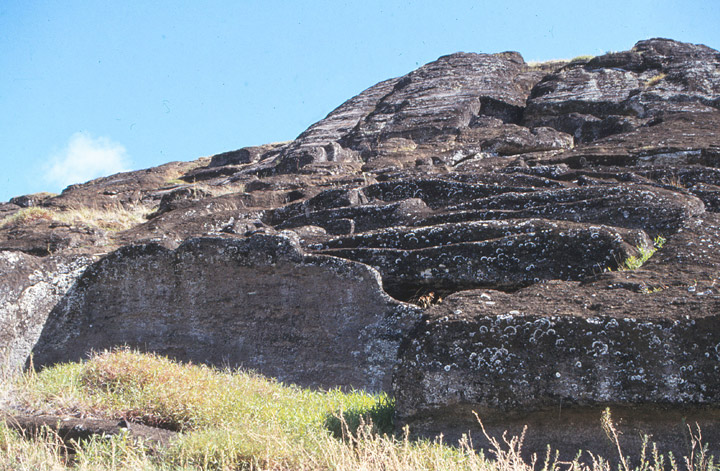 volcanic rock outcropping from which the megaliths were carved

Very little is known about the people who made the megaliths. The original inhabitants of Easter Island were Polynesians who migrated to the island beginning around AD 400. Descendants of these Polynesian settlers erected the statues between 800 and 1600. 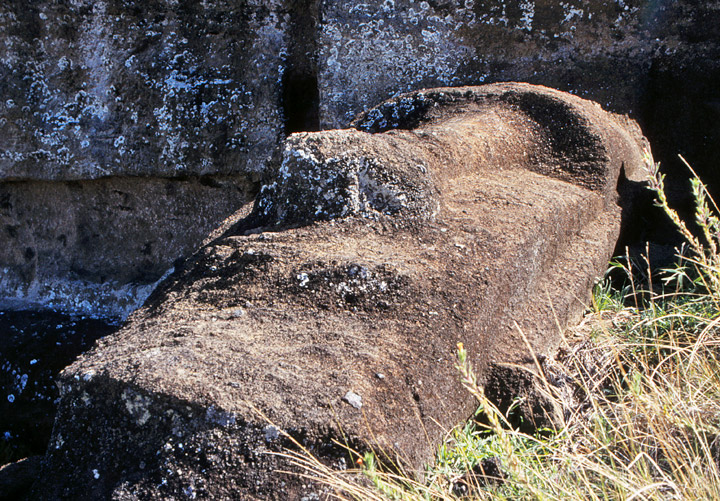 The largest of the existing stone monuments are the great burial platforms, called ahus, which were used to support rows of statues. 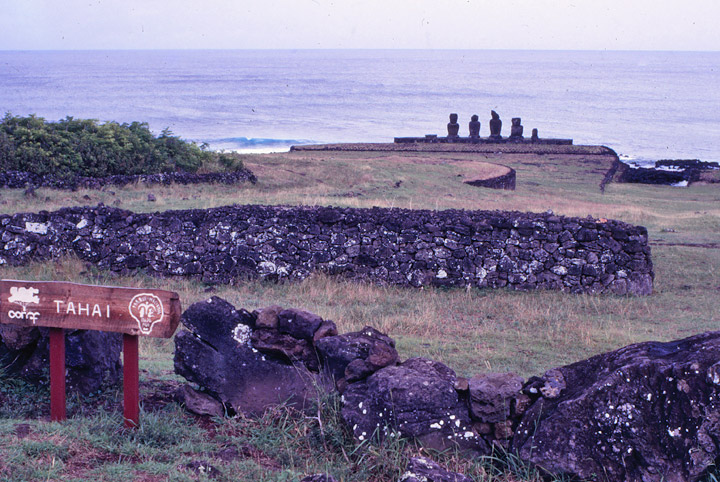 The ahus were situated on bluffs and in other positions commanding a view of the sea. Each ahu was constructed of neatly fitted stone blocks set without mortar.

The burial platform usually supported 4 to 6 statues, although one ahu, known as Tongariki, carried 15 statues. Within many of the ahus, vaults house individual or group burials. 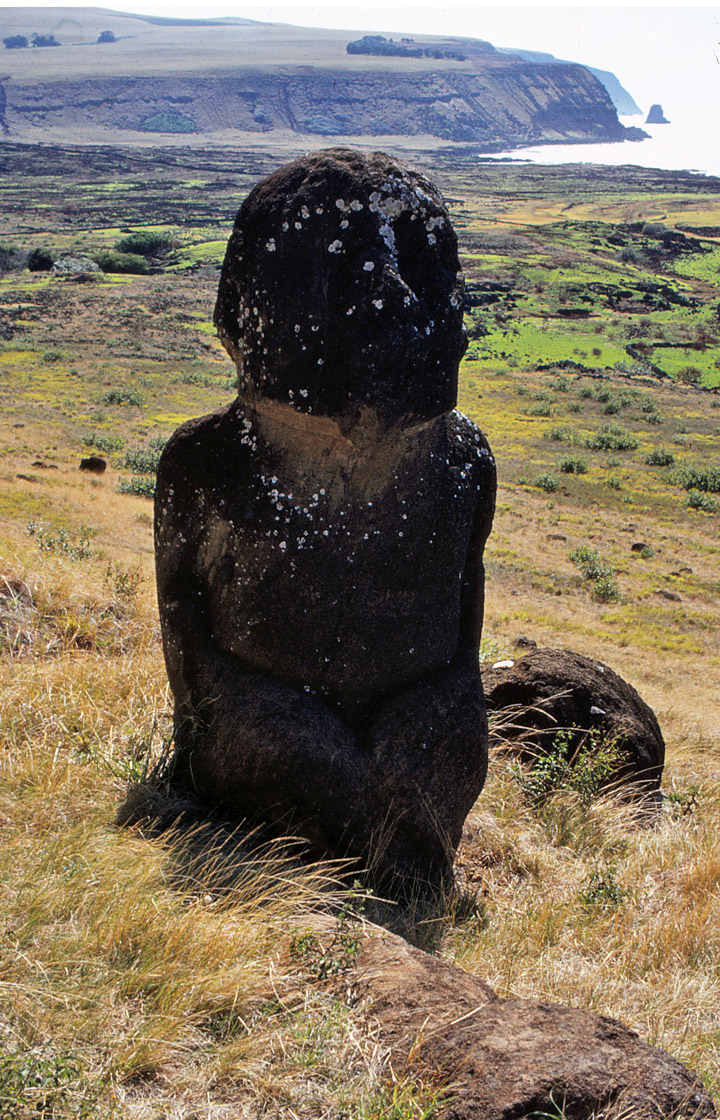 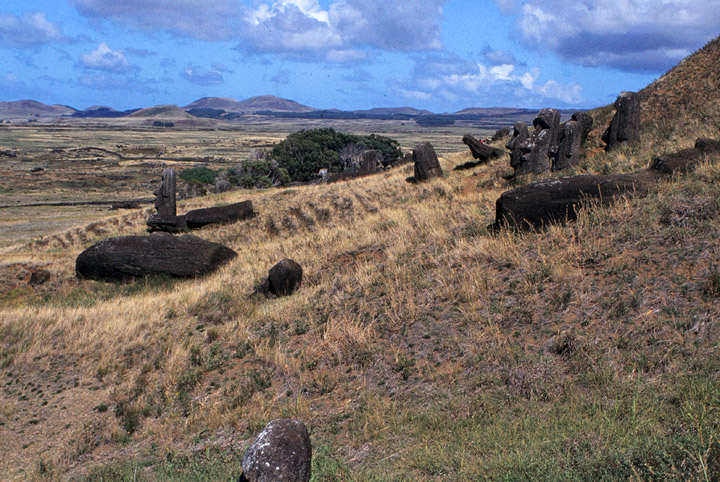 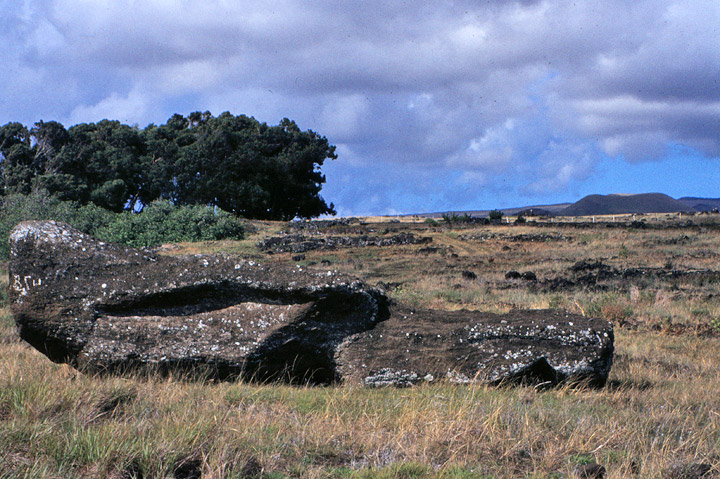 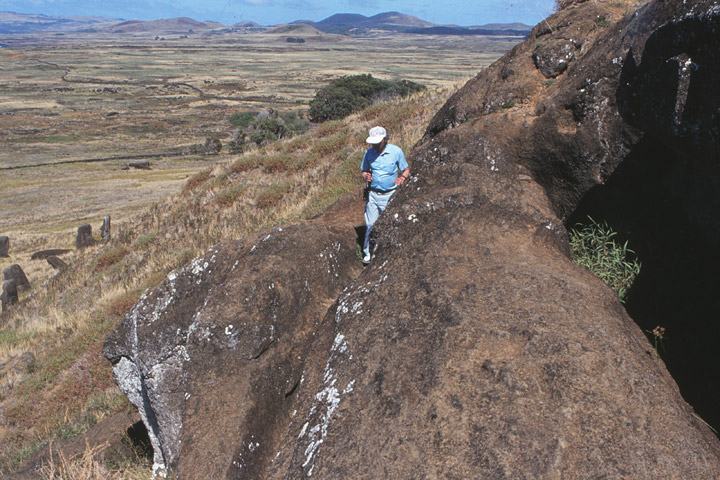 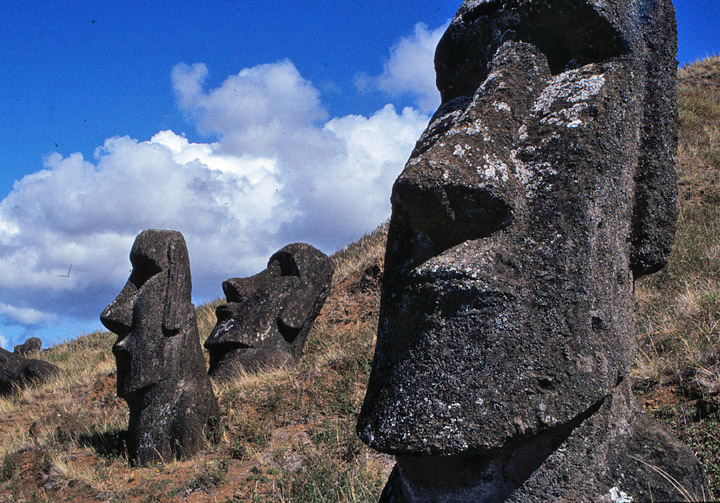 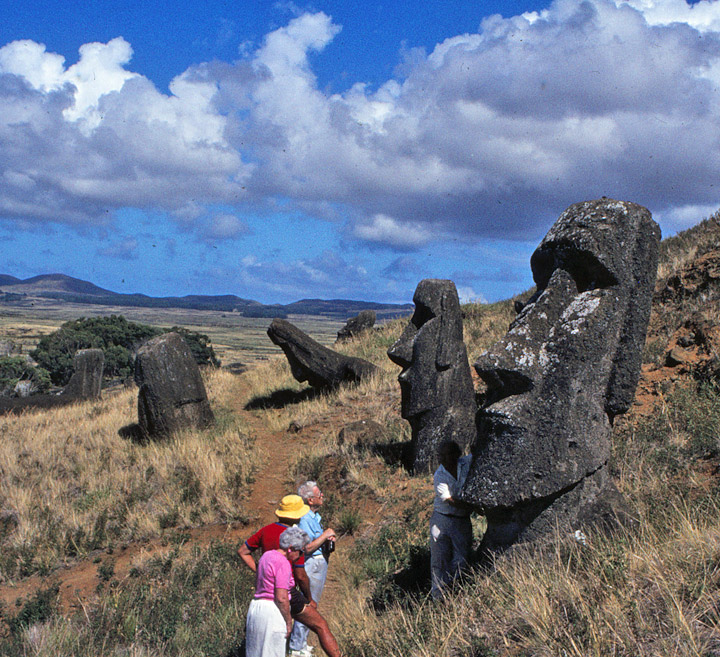 More than 880 statues remain on the island; they vary in height from 3 to 12 m (10 to 40 ft). Carved from tuff, a soft volcanic rock, they consist of huge heads with elongated ears and noses. 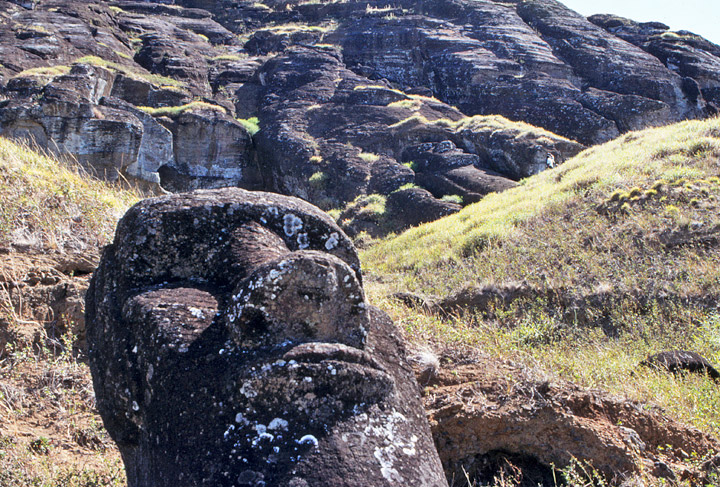 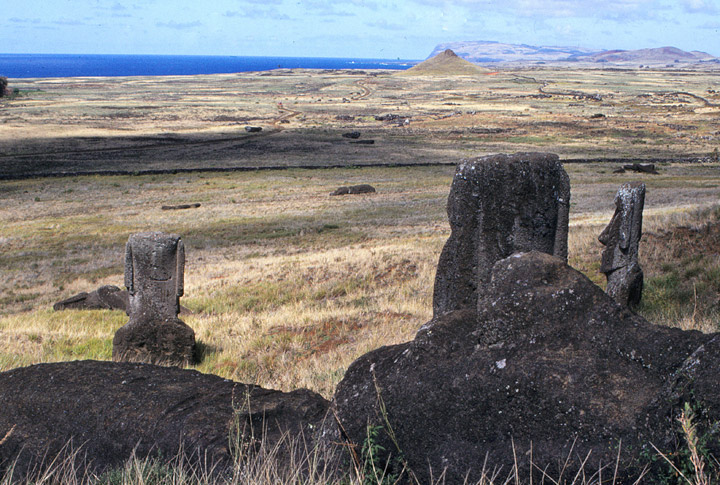 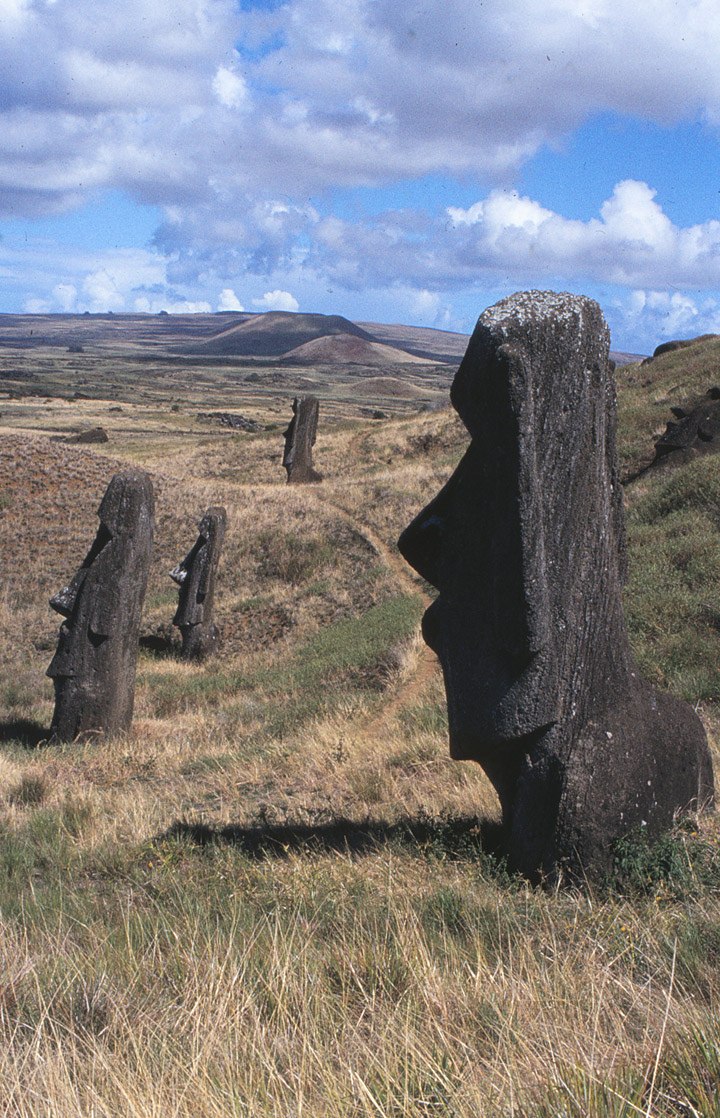 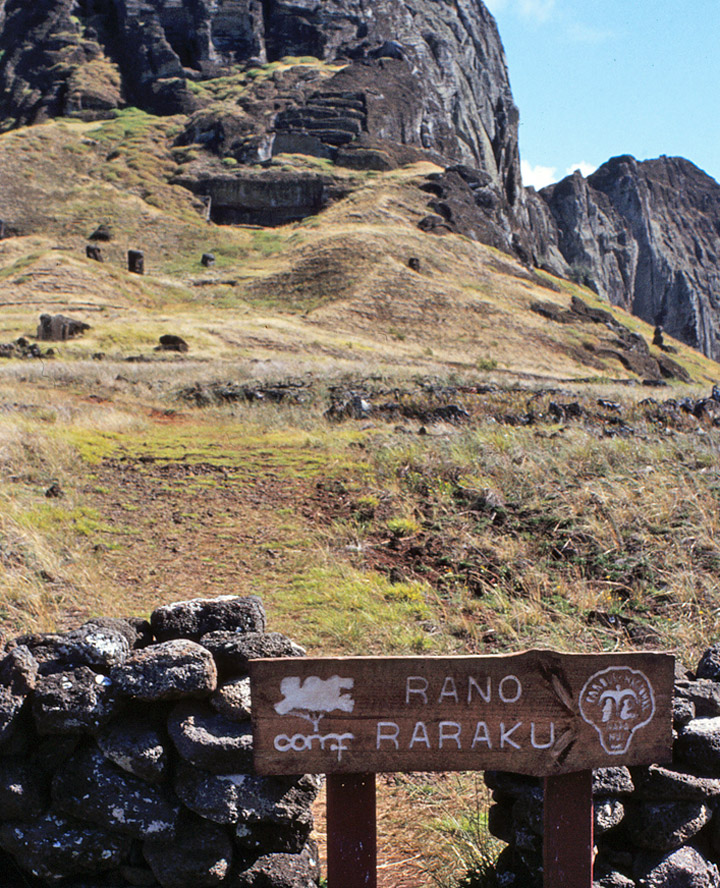 Material for the statues was quarried from the crater called Rano Raraku, where modern explorers found an immense unfinished statue 21 m (68 ft) long. Many of the statues on the burial platforms bore cylindrical, brimmed crowns of red tuff; the largest crown weighs 27 metric tons. 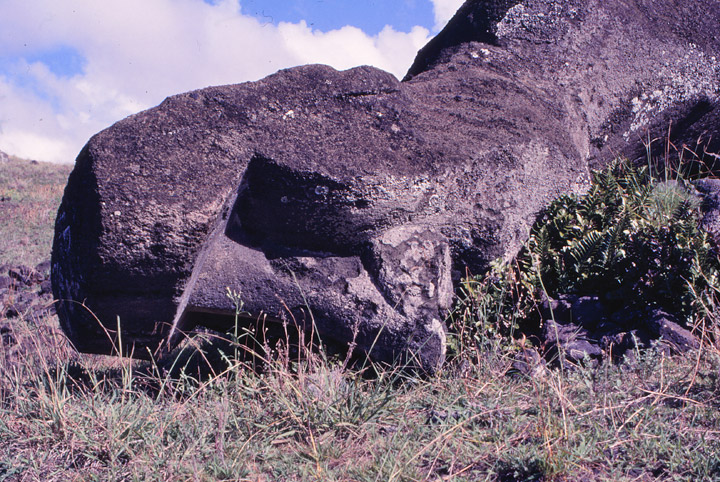 Excavations have also disclosed hidden caves containing decayed remains of tablets and wooden images, and numerous small wooden sculptures. The tablets are covered with finely carved and stylized figures, which seem to be a form of picture writing. 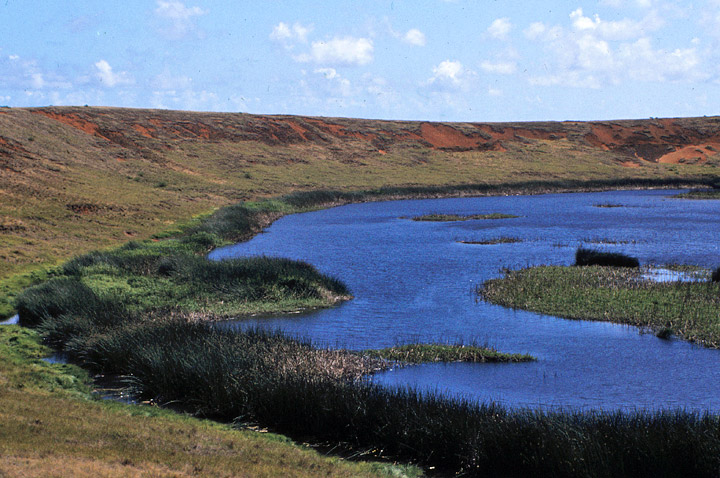 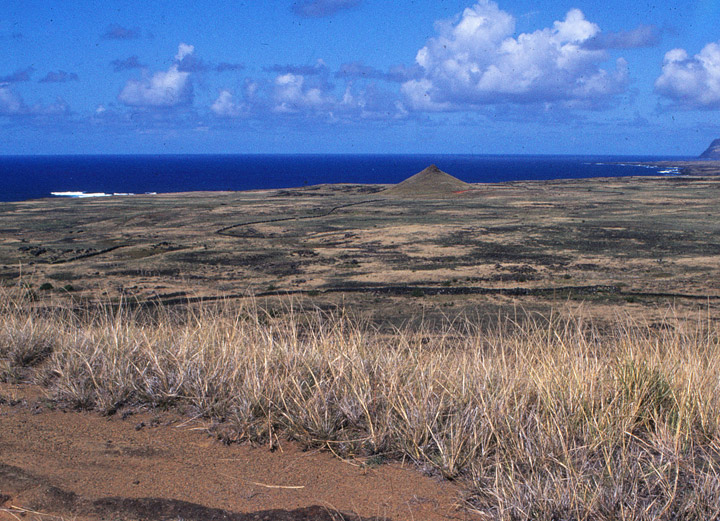 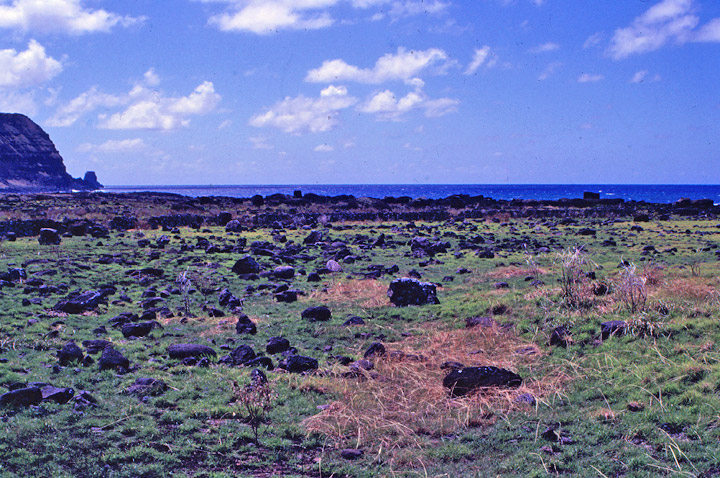 marker to William Mulloy who did much of the early research

Stone houses were up to 6 meters long, with a distinctive boat shaped structure combined with a stick and palm leaf or thatch superstructure. 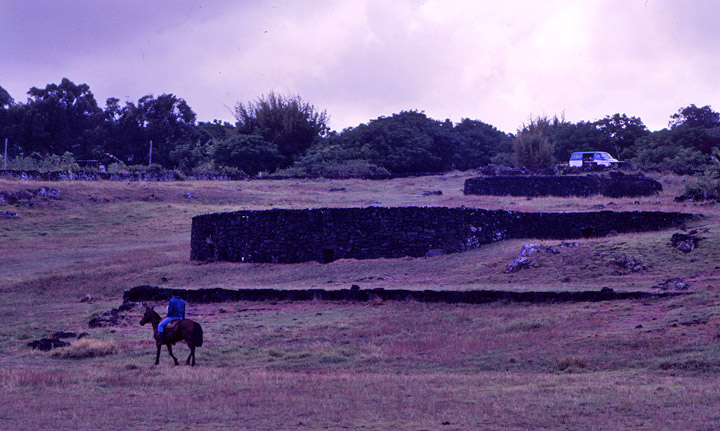 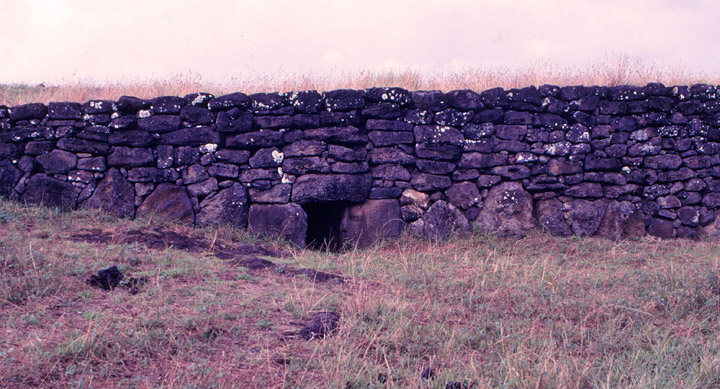 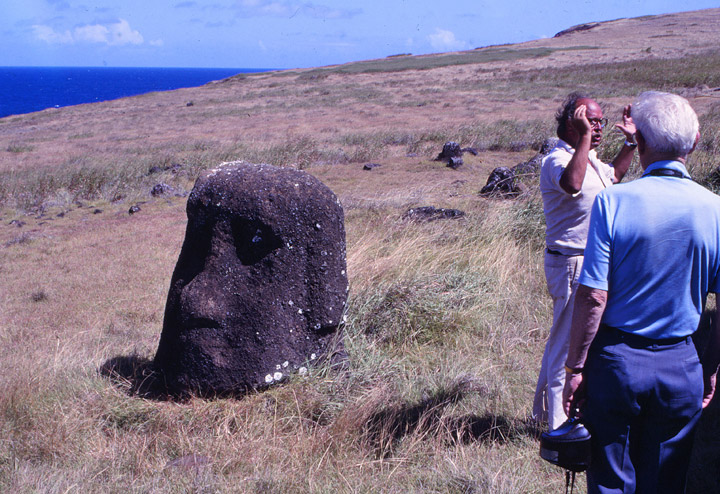 guide explaining the history of the island

Tour of the Island