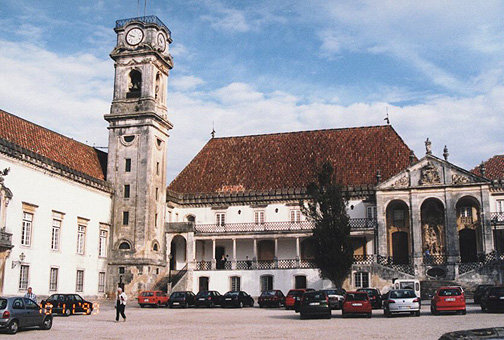 HISTORICAL NOTE on the UNIVERSITY

On 1 March 1290, King Dom Dinis decreed by royal charter the creation of the "Istudo Ceral (General Studies). On 9 August of that year. Pope Nicholas IV confirmed by bull the foundation of the University. All of the "sanctioned" Faculties were established - Canon Law, Law, Medicine, and Arts - with the exception of Theology, which was only created around 1380. The University functioned alternatively in Lisbon and Coimbra, finally being established at Coimbra in 1537 by King John III, who at the same time made profound reforms in it Several colleges were created - such as the College of the Arts, Saint Paul's College. and Saint Peter's College (which sits 10 the south of the Iron Gate) - for teaching. residence, and assistance purposes. 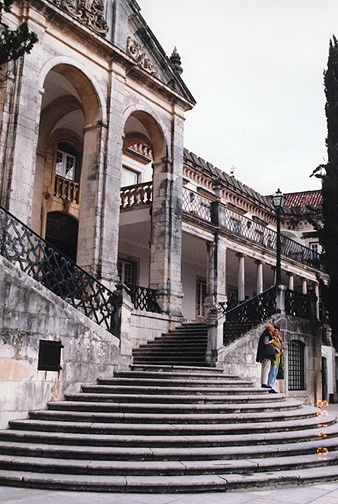 The influence of "enlightened absolutism" began to be felt in Portugal during the reign of King Joseph I (1750-1777). leading to one of the most important university restructuring. The main actors of this reform, which started in 1772, were the powerful minister Marques de Pombal (appointed Visitor to the University) and the "Reformer-Rector" Dow Francisco de Lemos. New statutes were formally introduced by Pombal on 29 September 1772. and it is from that time that the marks of the "Pombal Reformation" began to appear. After the expulsion of the Jesuits in 1759, several buildings were left vacant; It was here that some of the new faculties and services created by Fombal were established. Some of the most beautiful buildings. which even today are the hallmarks of the University. date from this period, the affluent period of the reigns of John V and Joseph I: the Tower, the King John Library (belonging to The period before Pombal), the Natural History Museum, the Chemical Laboratory. and the Botanical Gardens.

With the liberal movement of 1820 and its institutionalization in 1834. the University went through turbulent periods of conservatism and change, of crisis and vitality, of reform attempts frustrated by the government, which had different education policies. From the 1860's to the beginning of the Republic in 1910, several important academic movements, headed by famous literary figures such as Amelda Garreff, Antem de Quental, Jolio de Deus, and Eca de Quieros among others, led revolts against academic conservatism and began organizing theatrical, literary, and musical associations. The foundation of the Student Union dates from this period (1887). Since then the Union has distinguished itself as a center of organized struggle against the political establishment within and outside the University, asserting itself, even in difficult times, as an autonomous stronghold and, through its many specialized departments, as a disseminator of a dynamic cultural and associative life. With the founding of the Republic, the State, putting its faith in the democratization of education, stimulated and sponsored the creation of other universities in Lisbon and Oporto, simultaneously making some reforms at the University of Coimbra. 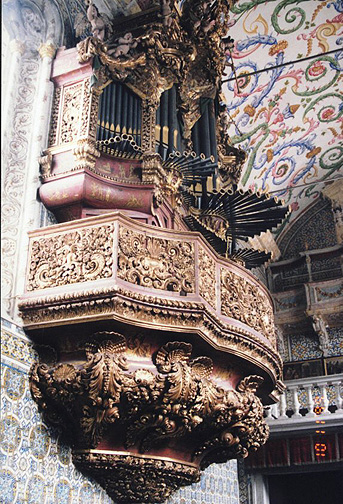 organ in the chapel

In 1911. one year after the Republic's founding, the Faculty of Theology was closed and the Humanities Faculty was created. The Faculties of Mathematics and Natural Philosophy merged and became the Faculty of Science, and the Departments of Pharmacy and Education were created. Later the Pharmacy Department would become the Faculty of Pharmacy. The military dictatorship that followed the "National Revolution" of 28 May 1926 and the establishment of the "New State" (Estado Novo) in 1933 were responsible for the demolition of some historical buildings on the Veiha Alto (the hill on which the University sits). Neither Renaissance churches and colleges. nor Manueline and Baroque houses were spared. In their place, new buildings were constructed in the architecture style of the period. In scientific and pedagogical terms, there was also a troubling hardening in this period. in the 1970's, the Prime-Minister (Professor Marcelo Caetanol and the Minister of Education (Professor Veiga Simio) became aware that it was no longer possible to ignore the social, political. scientific, and cultural movements occurring all over Europe. Because of this. the University underwent an attempt at modernization, which included the introduction of practical and technological courses (in 1972, the Faculty of Science became the Faculty of Science and Technology, and the Faculty of Economics was created). 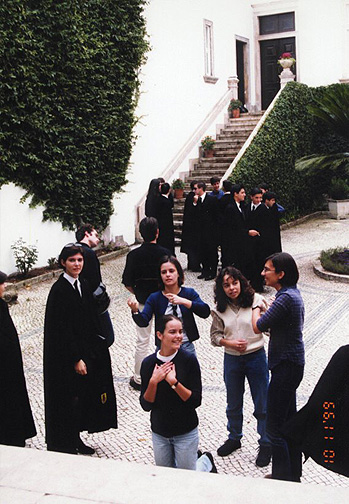 upper class students in their robes

New universities were established at Atetro, Braga, and Evora. The student movements were very significant in this period as organized forms of political opposition, struggling not only for better conditions in education, but also for social and political Ideals. With the April Revolution of 1974, the University expanded. the number of registered students increasing enormously. Democratic structures were established, and the struggle for autonomy reappeared (finally becoming a fact in September 1989 with Parliaments approval of the Law of University Autonomy). Today, the University of Coimbra includes seven faculties - Arts and Humanities, Law, Medicine, Science and Technology, Pharmacy. Economics, Psychology and Education, and soon an eighth (Faculty of Physical Education and Sports Sciences) - and has spilled beyond the traditional campus on the Veiha Alta into newly developed areas. It operates according to its own statutes, established and approved by the University Assembly (an elected body representing teachers, students and functionaries) and, above all, aspires to being a center of continuing modernization. 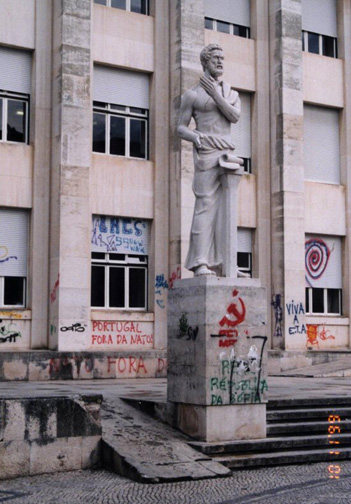 the modern university
(complete with graffiti)

But this traveling toward the future does not make the University forget its age-old traditions. The "Academic Praxis" ( adapted to contemporary times), the student celebrations namely the 'Queima das Fitas - the "Burning of the Ribbons" that symbolizes the end of the academic year and, for many, graduation). the "fado" (a style of song that adapted itself to new social realities). the "Solemn Doctoral Ceremonial Graduations" with their characteristic rituals, the Republics (student-administrated residencies), and the existence of a strong Student Union, all contribute to making the University of Coimbra a singular institution with unique characteristics..