Haiti, independent republic of the West Indies, occupying the western third of the island of Hispaniola. Haiti is bounded on the north by the Atlantic Ocean, on the east by the Dominican Republic, on the south by the Caribbean Sea, and on the west by the Windward Passage, which separates it from Cuba. Its area is 27,750 sq km (10,714 sq mi). Port-au-Prince is Haiti’s capital and largest city. 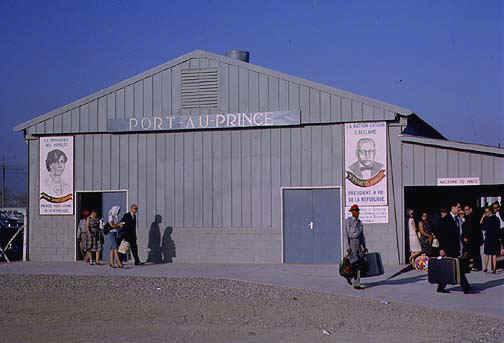 Airport of Francois Duvalier, "Papa Doc"
(I was on the first 707 to land at this new airport in 1962.
He insisted that Pan American start jet service)

donkey park next to country market

Other Photos of on the road to Cap-Haïtian

Other Photos of Jacmel

national museum
(the anchor of Columbus's "Santa Maria" is displayed
in the underground exhibition area.)

Other Photos of Port au Prince

leaders of the Peasants Movement in Milot

The Peasants Movement in Milot