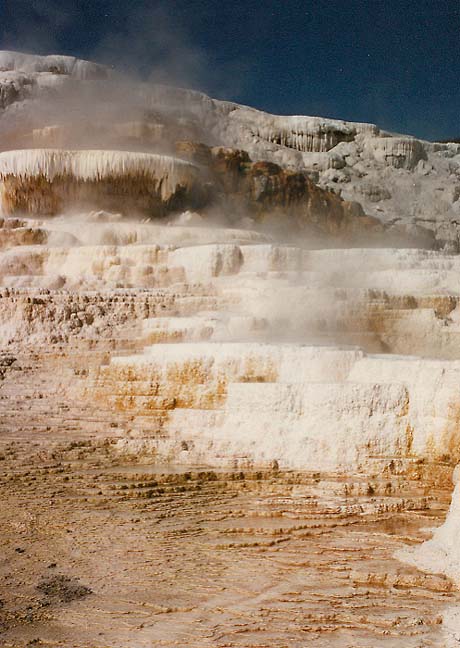 Yellowstone National Park, national park established in 1872. Located in northwestern Wyoming and extending into Montana and Idaho, the park is known for its spectacular geysers, hot springs, canyons, and fossil forests. Yellowstone was the world’s first national park. 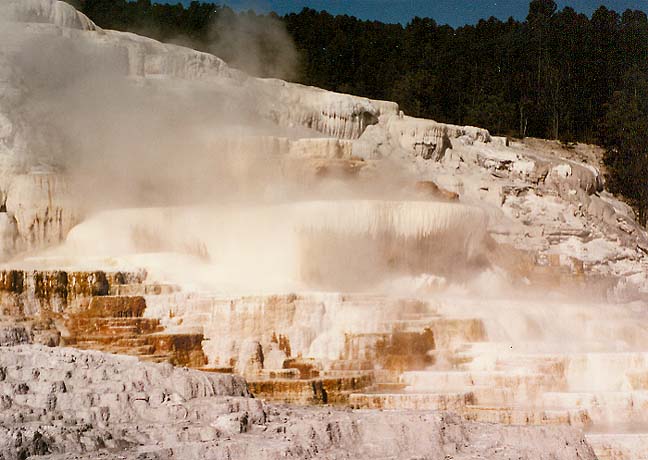 Native American groups lived in the area of Yellowstone for thousands of years. The name Yellowstone is thought to come from a translation of the Native American Minnetaree word mi tsi a-da-zi, for the yellow cliffs along the Yellowstone River. The first explorer to visit the Yellowstone area was John Colter in 1807, who had left the Lewis and Clark Expedition the previous year to explore the region. Explorations conducted by David Folsom, Charles Cook, and William Peterson in 1869, and by Henry Washburn, Nathaniel Langford, and Gustavus Doane in 1870 helped publicize the beauty of the area. Depictions of the region created during an expedition in 1871 by photographer William Henry Jackson and artist Thomas Moran convinced the American public and the United States government to preserve the area. President Ulysses S. Grant signed the bill creating the national park in 1872. An earthquake in 1959 with a magnitude of 7.5 on the Richter scale caused major disturbances throughout the park and was one of the largest ever recorded in the North American interior. In August and September 1988, a series of fires, fueled by dry and windy summer weather, burned more than 35 percent of the park. 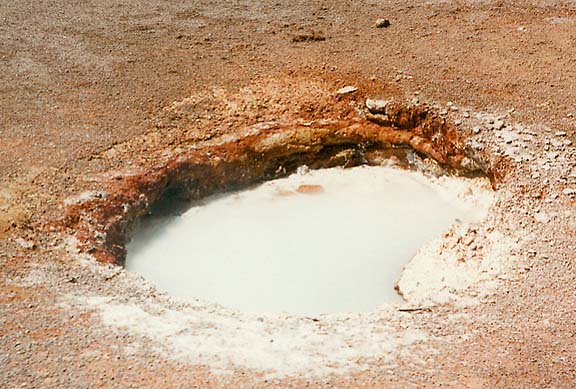 Photos of Yellowstone from 2004 visit

Located in the central Rocky Mountains, Yellowstone National Park is a broad volcanic plateau surrounded by mountain ranges. The park has an average elevation of 2,300 m (7,500 ft). The Gallatin Range in the northwest section of the park reaches an elevation of 3,350 m (10,992 ft) at Electric Peak. The Washburn Range, just east of the Gallatin Range, features Mount Washburn, which offers outstanding views of the park from its height of 3,122 m (10,243 ft). The Absaroka Range extending along the eastern side of the park includes Eagle Peak, the park’s highest point at 3,462 m (11,358 ft). 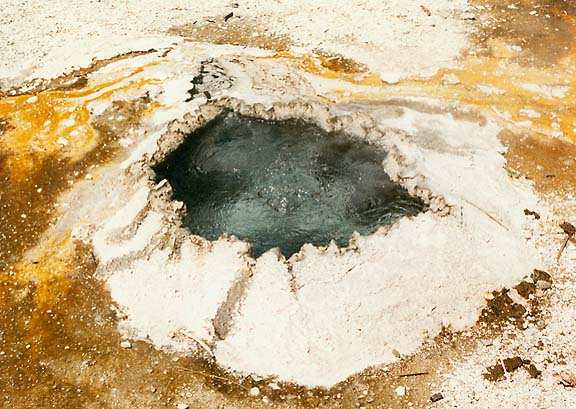 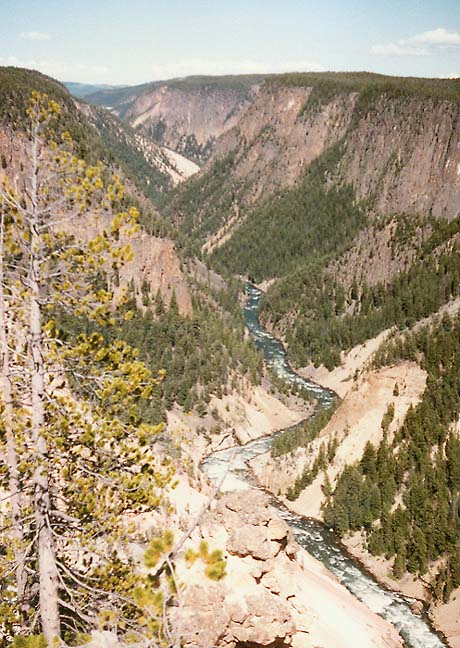 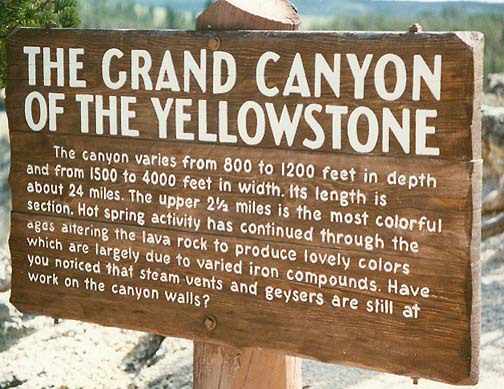 After emerging from Yellowstone Lake, the Yellowstone River flows through the meadows of Hayden Valley and then plunges into the Grand Canyon of the Yellowstone over the Upper and Lower Falls, which are 33 m and 94 m (109 ft and 308 ft) high, respectively. The canyon is 30 km (20 mi) long, and its walls reach a height of 370 m (1,200 ft). The walls of volcanic rock display shades of yellow, red, orange, and brown, and rugged rock formations take on unusual shapes. Artist Point and Inspiration Point offer magnificent views of the canyon and falls, including Tower Falls, where the waters of Tower Creek drop 40 m (132 ft) into the Yellowstone River. Another geologic feature of the park is Obsidian Cliff, a mountain of volcanic black glass and one of the largest deposits of obsidian in North America. Yellowstone National Park contains more than 10,000 thermal sites, the greatest concentration of such phenomena in the world. These include more than 300 geysers as well as hot springs, mud volcanoes (also known as paint pots), and fumaroles (vents issuing gasses and steam). 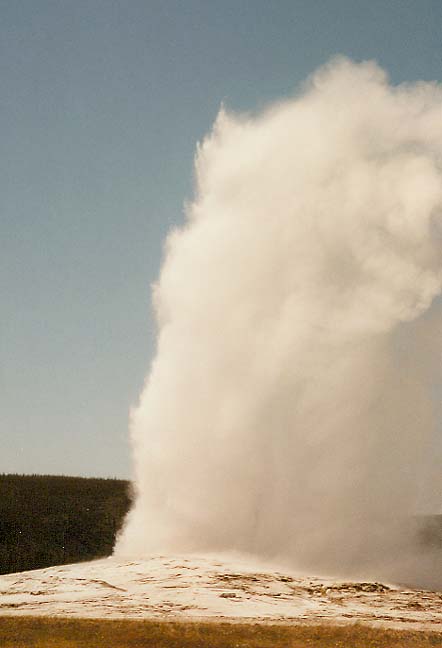 The geysers of Yellowstone are grouped in basins located in the western half of the park. These include Norris, West Thumb, Lower, Midway, and Upper geyser basins. The most famous geyser is Old Faithful, which erupts on the average of every 75 minutes for up to 5 minutes, shooting a column of steam and hot water as high as 50 m (170 ft). About 38,000 to 45,000 liters (about 10,000 to 12,000 gallons) of water are expelled at each eruption. 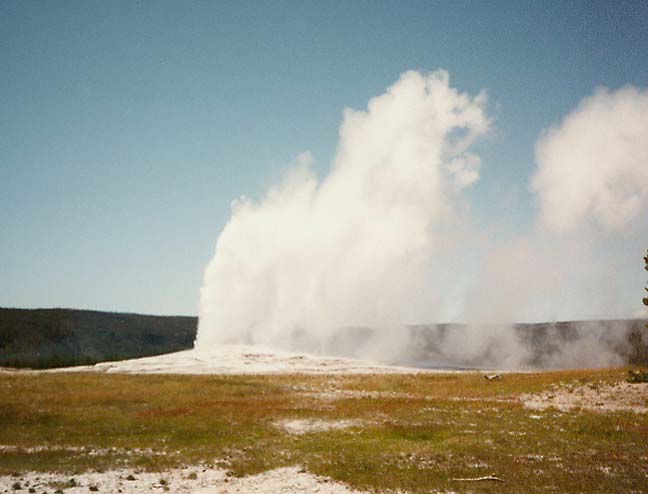 Other geysers include the Giant, which erupts at irregular intervals, throwing out a jet of hot water up to 60 m (200 ft) high; and the Giantess, which erupts for more than four hours, about twice a year. Steamboat Geyser, the world’s tallest geyser, erupts infrequently but as high as 120 m (380 ft). Riverside Geyser is one of the most dependable and unusual of the park’s geysers. It sends an arching spray of water over the Firehole River every six to nine hours. Sapphire Geyser, formerly a hot pool, erupted violently after the 1959 earthquake but gradually became dormant and has not experienced a true eruption since 1971. Other notable geysers include Daisy, Grand, Porkchop, and Great Fountain. 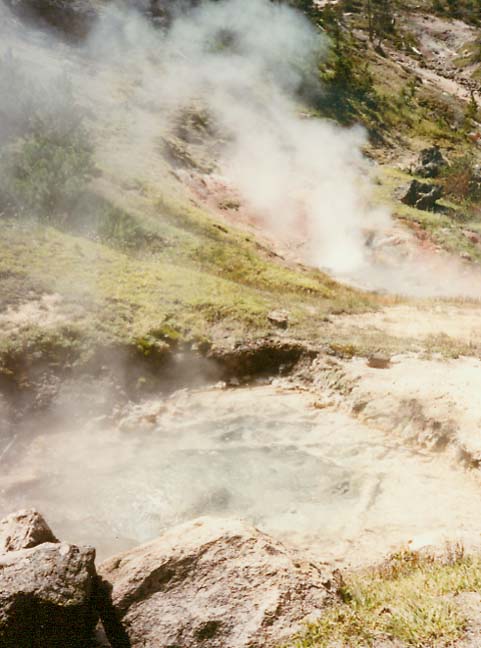 More Photos of Hot Springs and Geysers in the Upper Basin

The park contains more hot springs than geysers. Mineral deposits from the waters of the hot springs have formed cones and terraces on some of the surrounding ground. The most striking example is Mammoth Hot Springs, where the waters flow over terraces as high as 90 m (300 ft). Algae and bacteria thrive in the pools of warm water that collect on the terraces, giving the terraces brilliant colors. 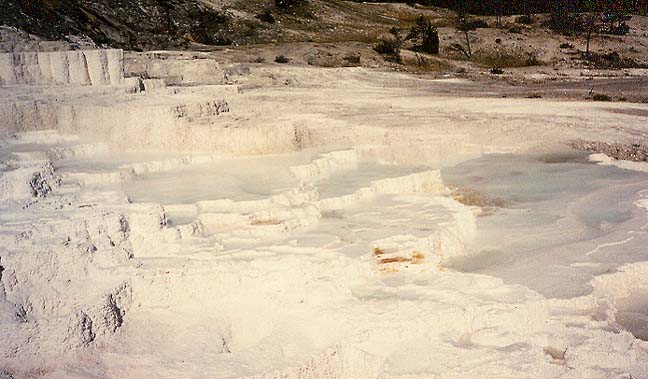 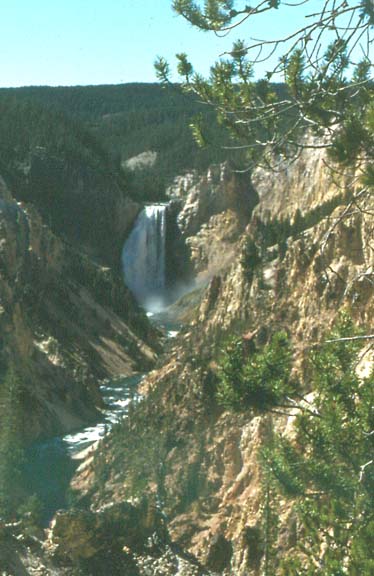 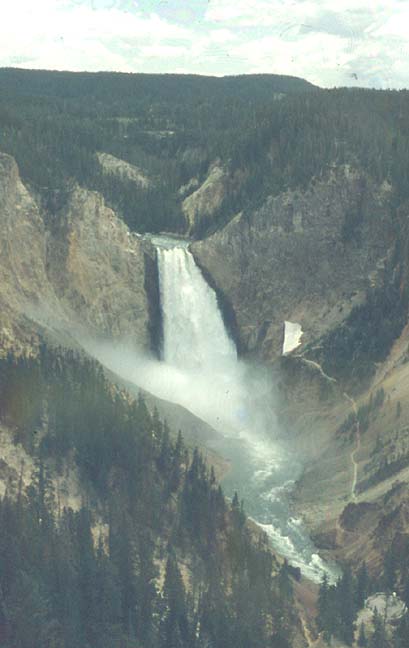 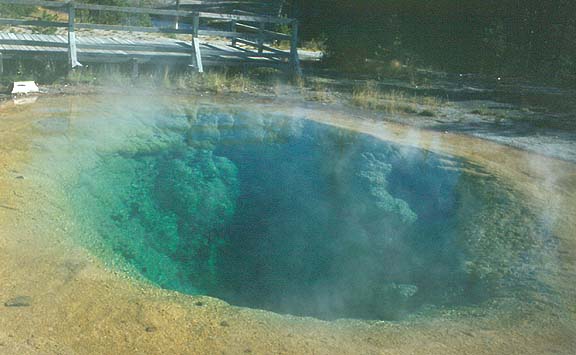 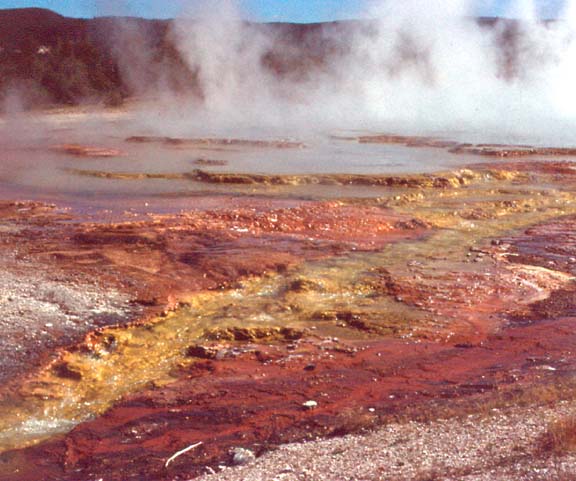 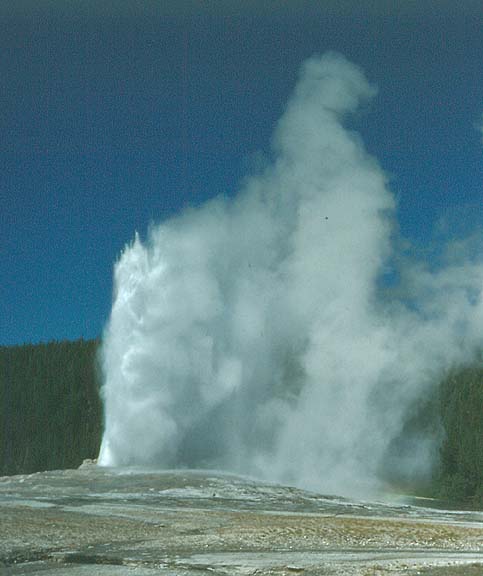 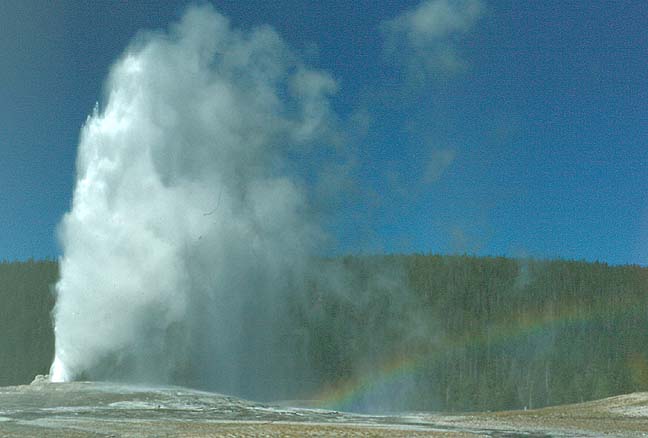 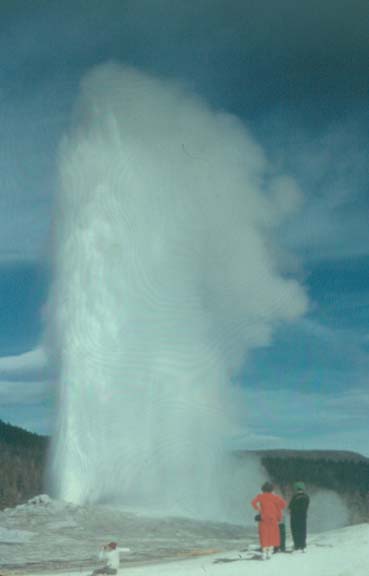 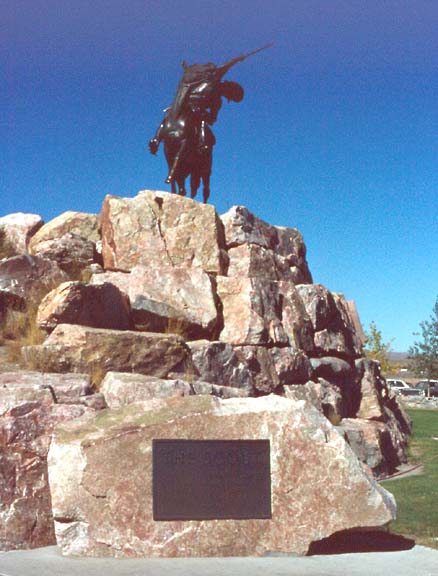 , real name William Frederick Cody (1846-1917), American guide, scout, and showman, born in Scott County, Iowa. In 1854 his family moved to Kansas, where his father died a few years later. Cody briefly attended school in 1859. At the age of 14, he became one of the riders of the newly established Pony Express. When the American Civil War began in 1861, Cody served as a scout and guide for the Union Army. In 1863 he enlisted in the Seventh Kansas Cavalry as an army scout. At the close of the war in 1865 he contracted with the Kansas Pacific Railroad to furnish buffalo meat to the workers on the line. His claim of killing more than 4000 buffalo in less than 18 months earned him the nickname "Buffalo Bill." He served as an army scout again from 1868 to 1872. In 1872 the United States government awarded Cody the Congressional Medal of Honor but revoked it 44 years later because he had not been a member of the military at the time the award was given. 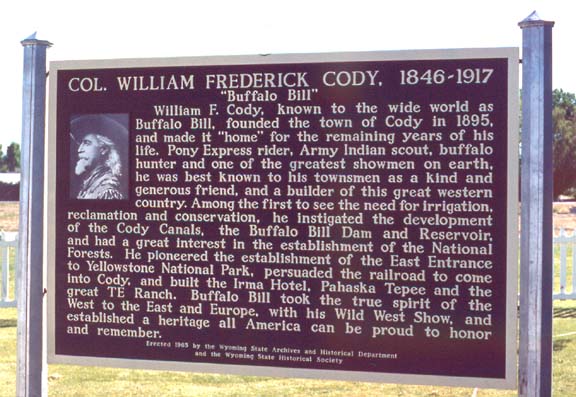 As Buffalo Bill, Cody became a feature of dime novelist Ned Buntline's stories. From 1872 to 1883, Cody was a showman, usually acting the part of himself in one of Buntline's melodramas. Cody occasionally returned west during this period to guide cavalry and raise cattle. He also fought in the Sioux War of 1876. In 1883 Cody organized his Wild West Show, a representation of life on the plains, which toured Europe and the United States for almost 20 years. The legendary Native American leader Sitting Bull and sharpshooter Annie Oakley were stars in the show. In 1901 Cody became president of the Cody Military College and International Academy of Rough Riders, a riding school he established on his property in Wyoming. The town of Cody, Wyoming, is named after him. 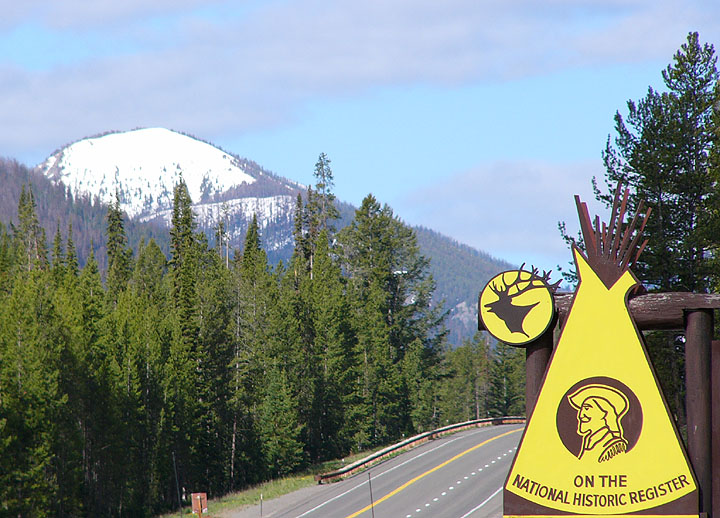 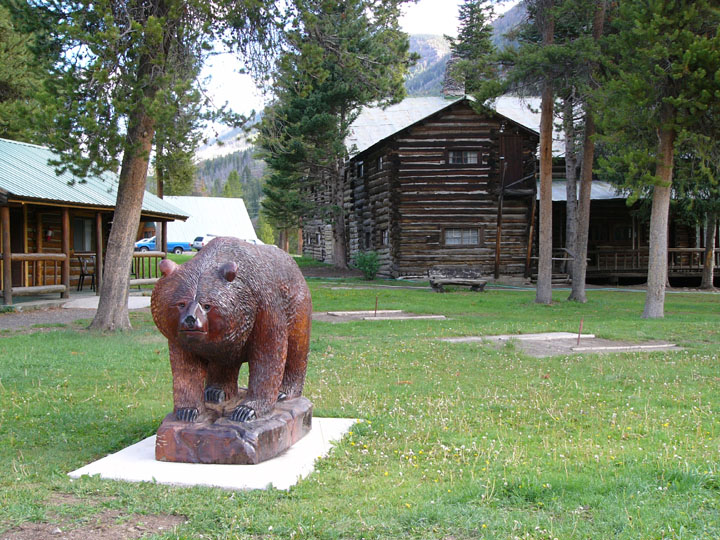 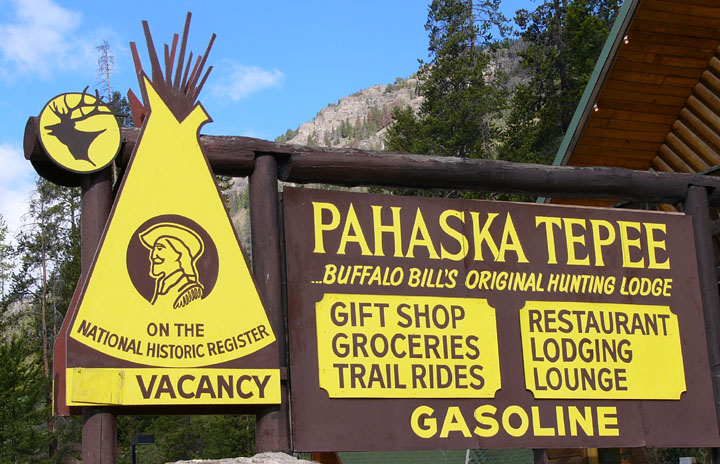