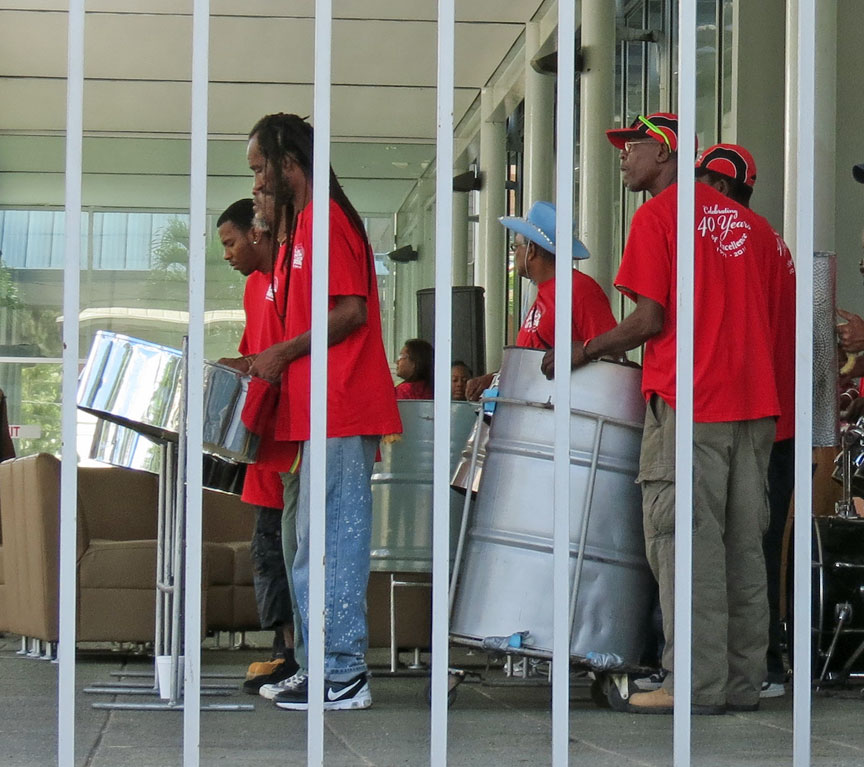 in front of a government office

Steelpans (also known as steel drums or pans, and sometimes, collectively with other musicians, as a steel band or orchestra) is a musical instrument originating from The Republic of Trinidad and Tobago. Steel pan musicians are called pannists. 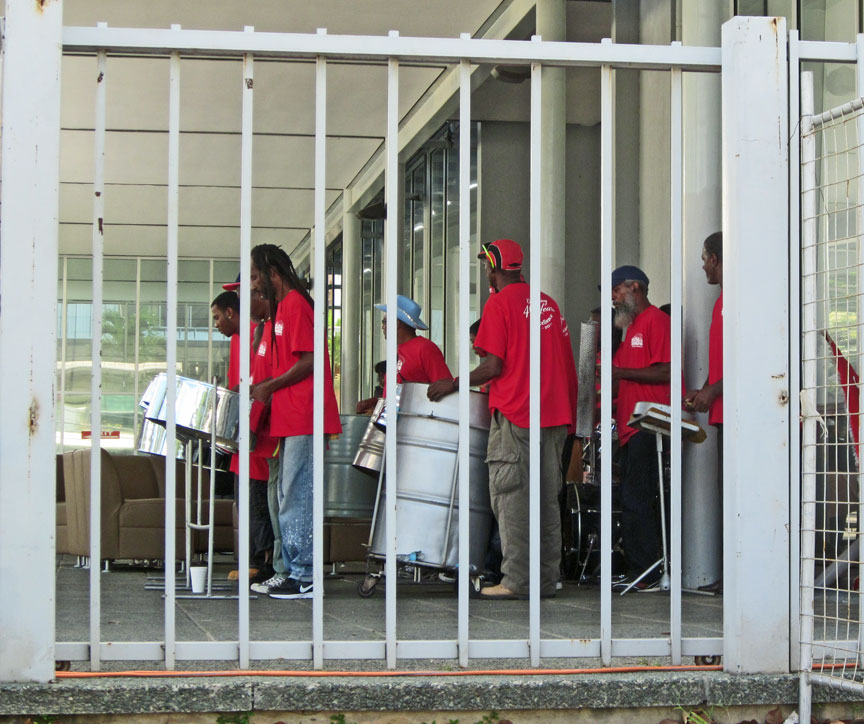 The pan is a chromatically pitched percussion instrument (although some toy or novelty steelpans are tuned diatonically), made from 55 gallon drums that formerly contained oil and like substances. In fact, drum refers to the steel drum containers from which the pans are made; the steel drum is correctly called a steel pan or pan as it falls into the idiophone family of instruments, and is not technically regarded as a drum or membranophone. The pan is struck by a pair of straight sticks tipped with rubber; the size and type of rubber tip is unique to the class of pan being played. Some musicians use four pansticks, holding two in each hand. This skill and performance has been conclusively shown to have grown out of Trinidad and Tobago's early 20th century Carnival percussion groups known as Tamboo Bamboo. The pan is the national instrument of Trinidad and Tobago. Since Pythagoras calculated the formula for the musical cycle of fourths and fifths, Steel Pans are the only instruments made to follow this configuration.

French planters and their slaves emigrated to Trinidad during the French Revolution (1789) from Martinique, including a number of West Africans, and French creoles from Saint Vincent, Grenada, Saint Lucia and Dominica, establishing a local community before Trinidad and Tobago were taken from Spain by the British. Carnival had arrived with the French, and the slaves, who could not take part in Carnival, formed their own, parallel celebration called canboulay. 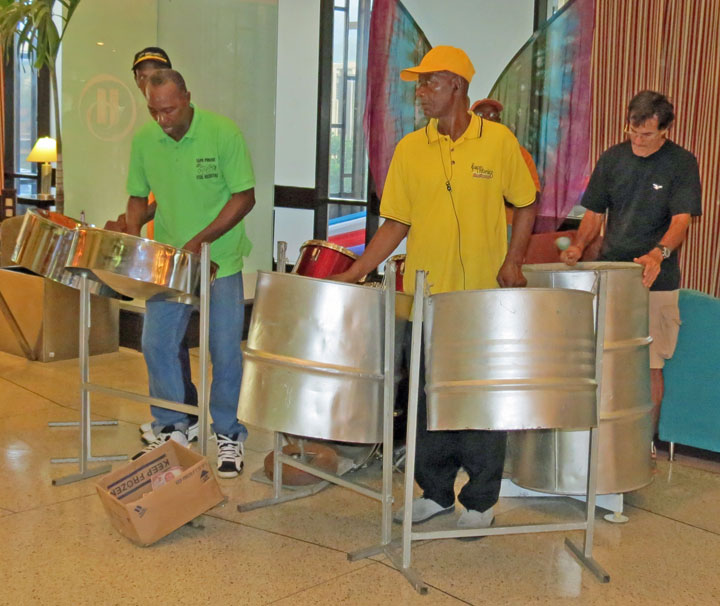 at the Hilton Hotel, Carnival 2012

Stick fighting and African percussion music were banned in 1880, in response to the Canboulay Riots. They were replaced by bamboo sticks beaten together, which were themselves banned in turn. In 1937 they reappeared, transformed as an orchestra of frying pans, dustbin lids and oil drums. These steelpans are now a major part of the Trinidadian music scene and are a popular section of the Canboulay music contests. In 1941, the United States Navy arrived on Trinidad, and the panmen, who were associated with lawlessness and violence, helped to popularize steel pan music among soldiers, which began its international popularization. 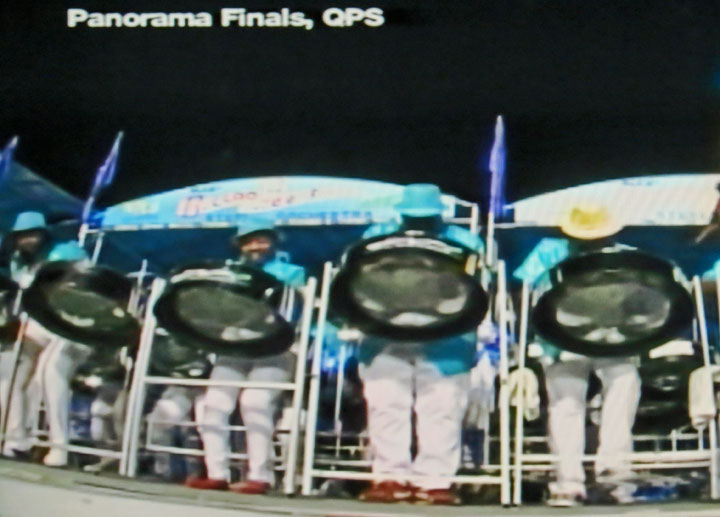 Panorama Finals at the 2012 Carnival in Queen's Park, Port of Spain
Photos from local TV

The first instruments developed in the evolution of steelpan were Tamboo-Bamboos, tunable sticks made of bamboo wood. These were hit onto the ground and with other sticks in order to produce sound. Tamboo-Bamboo bands also included percussion of a (gin) bottle and spoon. By the mid-1930s, bits of metal percussion were being used in the tamboo bamboo bands, the first probably being either the automobile brake hub "iron" or the biscuit drum "boom". The former replaced the gin bottle-and-spoon, and the latter the "bass" bamboo that was pounded on the ground. By the late 1930s their occasional all-steel bands were seen at Carnival and by 1940 it had become the preferred Carnival accompaniment of young underprivileged men. The 55-gallon oil drum was used to make steelpans from around 1947. The Trinidad All Steel Percussion Orchestra (TASPO), formed to attend the Festival of Britain in 1951, was the first steelband whose instruments were all made from oil drums. Members of TASPO included Ellie Mannette and Winston "Spree" Simon. Hugh Borde also led the National Steel Band of Trinidad & Tobago at the Commonwealth Arts Festival in England, as well as the Esso Tripoli Steel Band, who played at the World’s Fair in Montreal, Canada, and later toured with Liberace and were also featured on an album with him.

Steelpans are built using sheet metal with a thickness between 0.8 mm and 1.5 mm. Traditionally, steelpans have been built from used oil barrels. Nowadays, many instrument makers do not rely on used steel containers and get the resonance bodies manufactured according to their preferences and technical specifications. In a first step, the sheet metal is stretched into a bowl shape (this is commonly known as 'sinking'). This process is usually done with hammers, manually or with the help of air pressure. The note pattern is then marked onto the surface, and the notes of different sizes are shaped and molded into the surface. After the tempering, the notes have to be softened and tuned (initial tuning). The softening is part of this initial tuning process. The technician will use the best possible tuning device to get the right notes for each of the playing areas and to the pitch that is wanted. Often they will use an electronic tuner called a strobe tuner to assist the tuning of the steelpan. 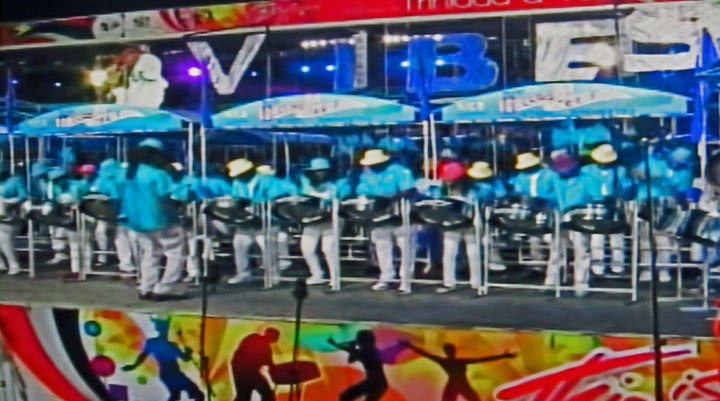 The note's size corresponds to the pitch—the larger the oval, the lower the tone. The size of the instrument varies from one pan to another. It may have almost all of the "skirt" (the cylindrical part of the oil drum) cut off and around 30 soprano-range notes. It may use the entire drum with only three bass notes per pan, in which case one person may play six such pans. The length of the skirt generally corresponds to the tessitura (high or low range) of the drum. The pans are usually either painted or chromed. Other processes such as nickel plating, powder coating or hardening can also be applied as a finish. 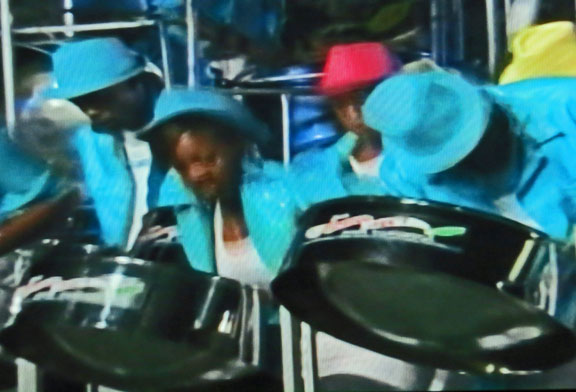 Despite being a relatively new member of the percussion family, steelpan tuning techniques have advanced rapidly. Because of the short "voice" of the pan, needle/LED display type tuners cannot track the signal to identify a tone. Strobe tuners are real-time tuners, ideally suited for the task. The need to see the first few overtones further makes a strobe tuner a necessity for steelpan tuning. Steelpan makers have used strobe tuners since it was discovered that, by adjusting the overtones (1st (fundamental), 2nd and third partial), the pan's sound seemed to sparkle in a way that it did not previously. 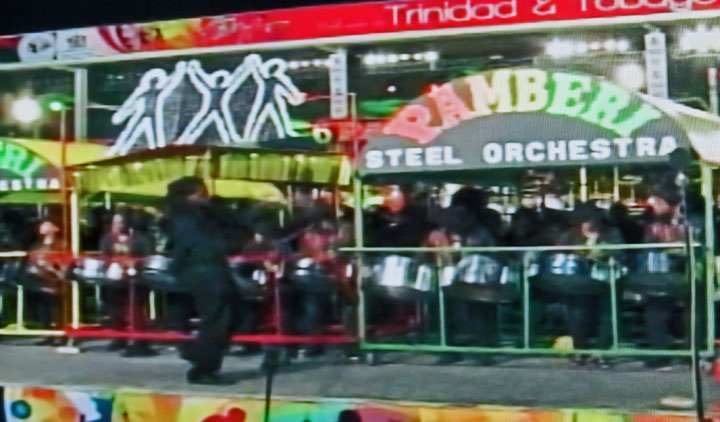 There are several ways in which a steelpan may become out of tune (most commonly this is caused by playing the steelpan with excessive force and incorrect handling) and it is quite common that steelbands arrange to have their instruments tuned once or twice a year. A tuner must have great skill in his/her work to manage to make the notes sound both good and at the correct pitch. Much of the tuning work is performed using hammers.

Anthony Williams designed the "Fourths and Fifths" arrangement of notes, known as the cycle of fifths. This has become the standard form of note placement for lead pans. Other important developments include the tuning of harmonic overtones in individual notes, developed simultaneously and independently by Bertie Marshall and Alan Gervais. 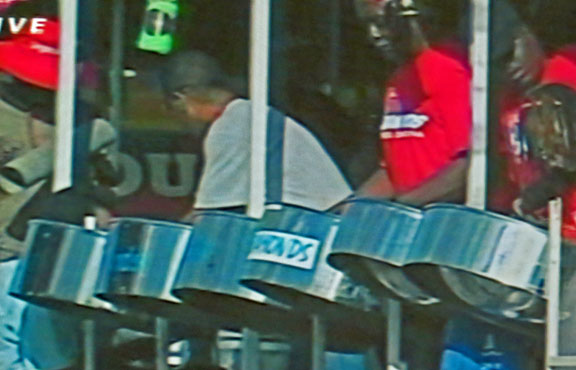 The Caribbean Research Institute CARIRI investigated possibilities to mass produce raw forms with the use of pressing machines in the 1970s. Much of this project took place in Sweden in collaboration with the Saab Company. Although first results were promising, the project has been abandoned due to lack of finances and support by local pan tuners in Trinidad. Another method of shaping the pan was attempted: by spinning. The pan was spun on a lathe-like device, and a roller on the end of a bar was used to sink the pan. While this did create pre sunk pans, a problem was that there would often be scratches and grooves in the steel. 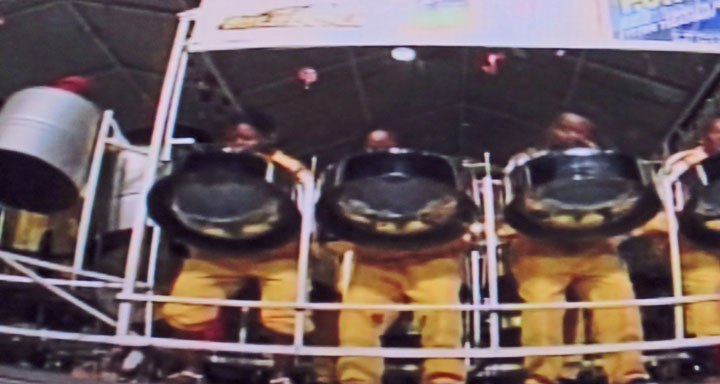 Since the steel is stretched pretty thin, any scratch will expand and can crack. Often drums have lettering embossed into the bottom. If done carefully, these can sometimes be stretched without breaking, but cracks around lettering on some drums is common. To avoid this problem, makers position the inner notes to avoid most of the letters. Brazing over the holes and grinding, will often fix the problems, without damaging the sound, but it has to be done nearly at the end of the sinking process, and well before any final shaping. 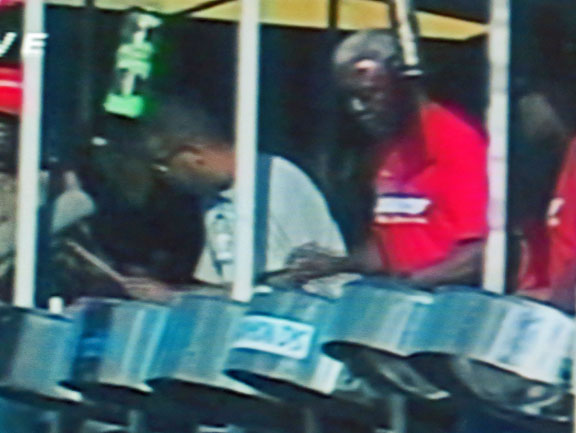 A Swiss steel pan manufacturer (PANArt) researched the field of fine-grain sheet steel and developed a deep drawn raw form which was additionally hardened by nitriding. This process, and the instruments they called Pang, were presented at the International Conference of Steel pan and Science in Port-of-Spain in 2000. 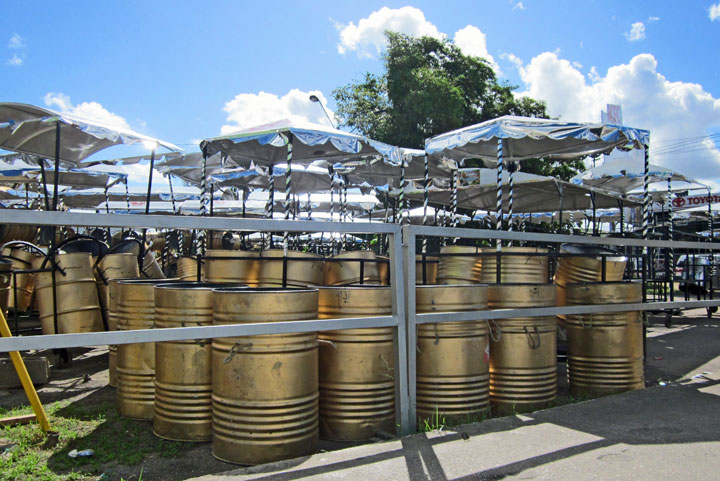 Electronic steel pans have also been developed. One such version is the E-Pan, invented by Salmon Cupid, who holds utility patents for it.  Another is the Percussive Harmonic Instrument (PHI), 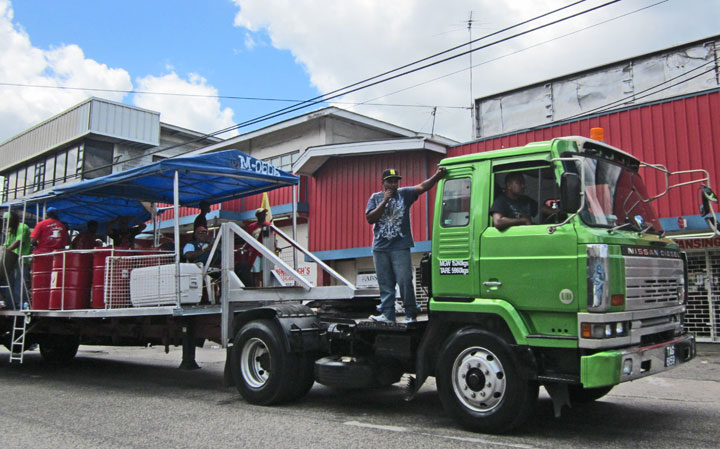