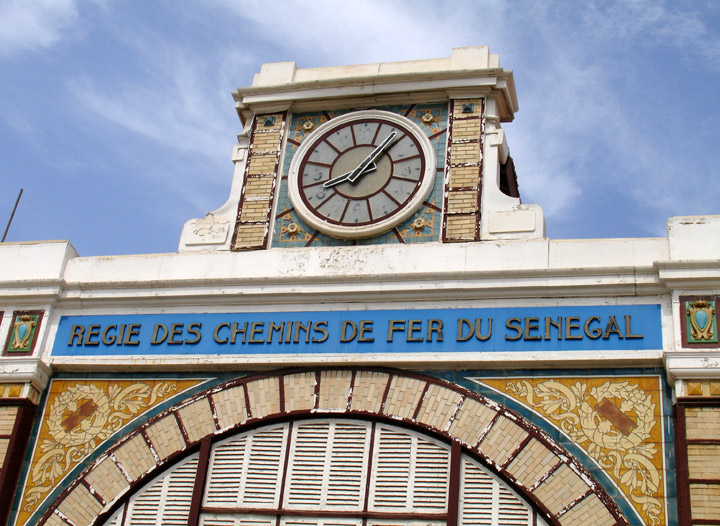 Dakar is the capital city of Senegal, located on the Cape Verde Peninsula, on the country's Atlantic coast. Its position, on the western edge of Africa (it is the westernmost African city), is an advantageous departure point for trans-Atlantic and European trade; this fact aided its growth into a major regional port. 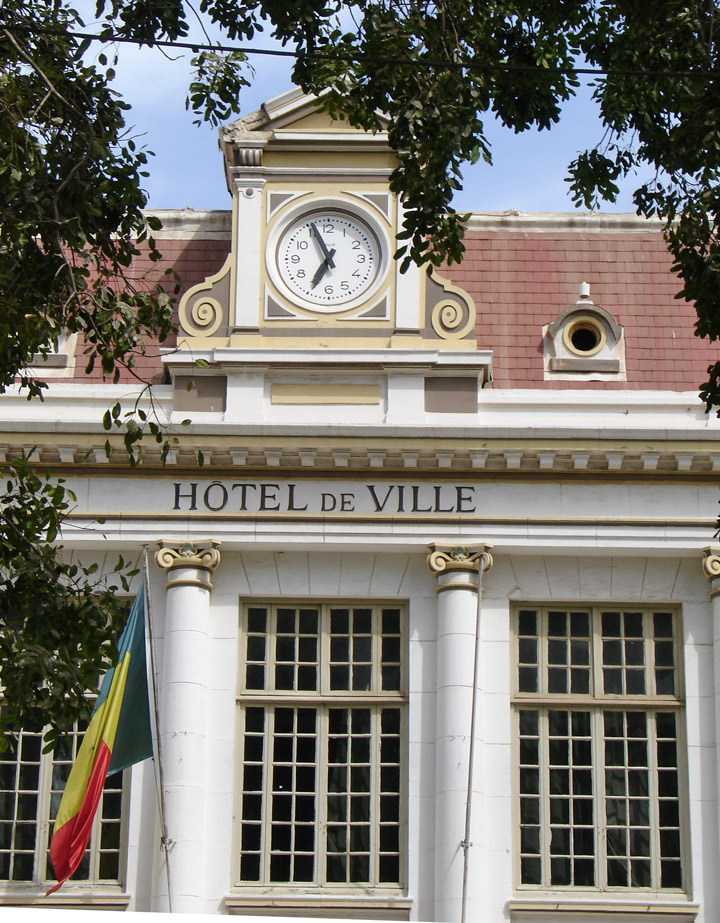 In 2005 the population of the metropolitan area was estimated at 2.4 million people, of which about 1 million live in the city of Dakar proper. 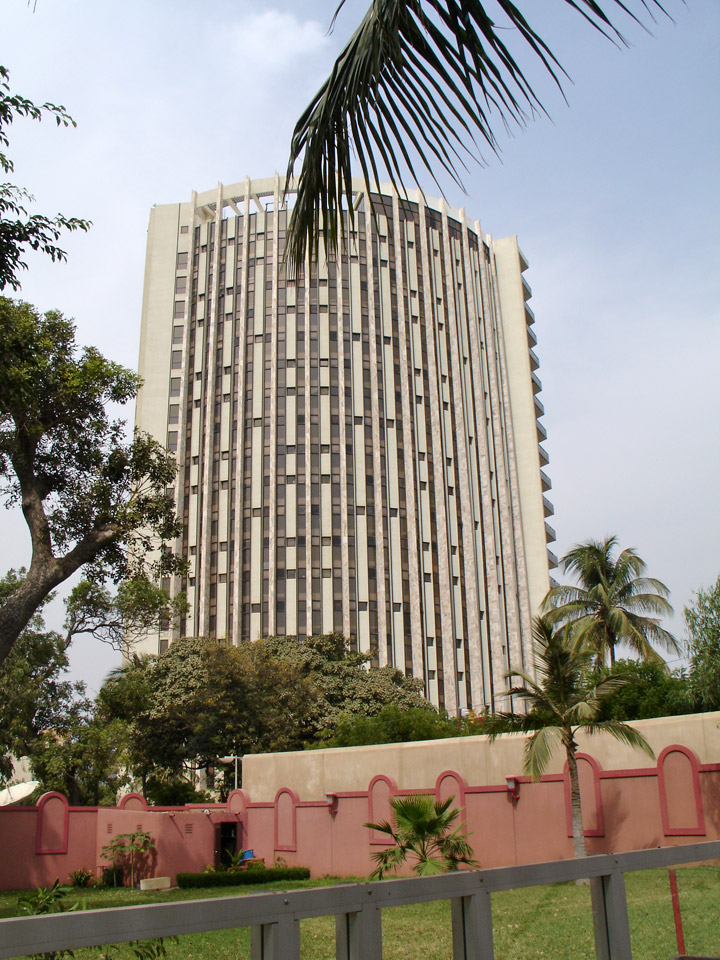 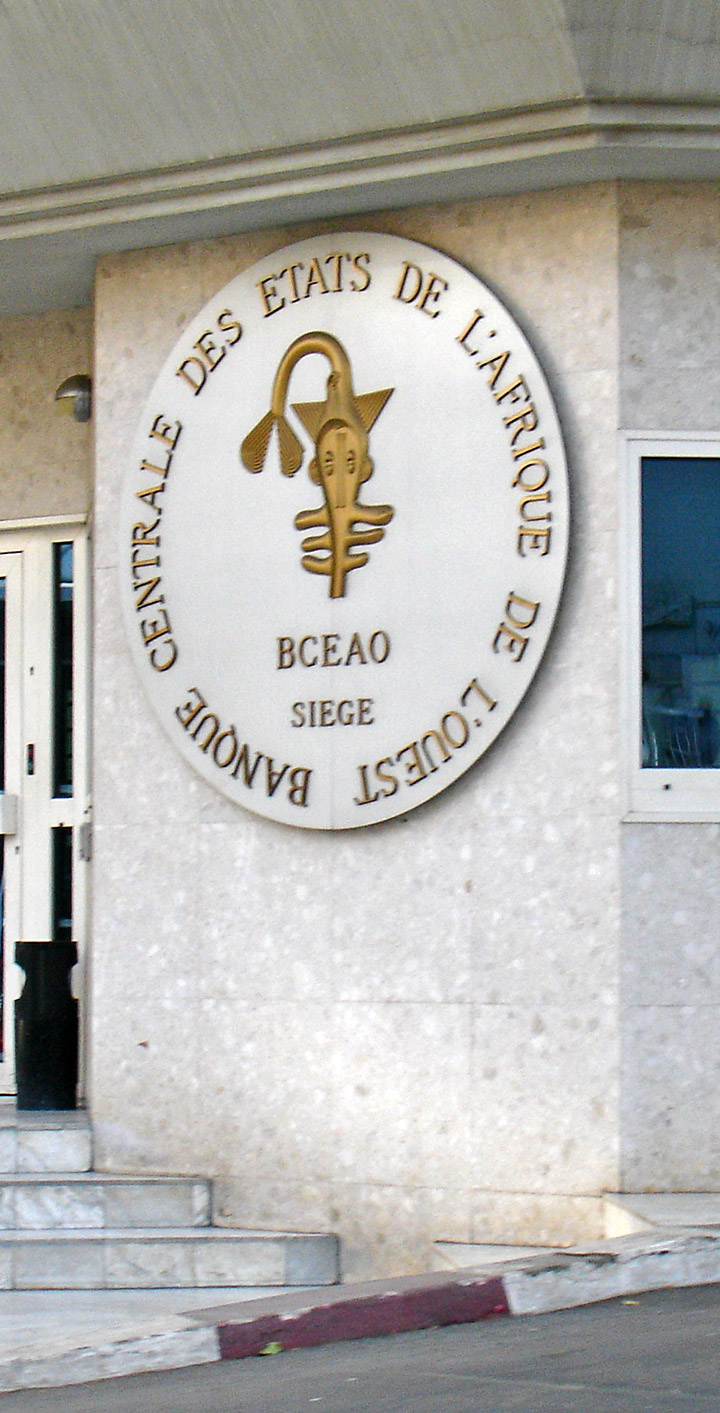 Dakar is a major administrative centre, home to the Senegal National Assembly and Senegal Presidential Palace. 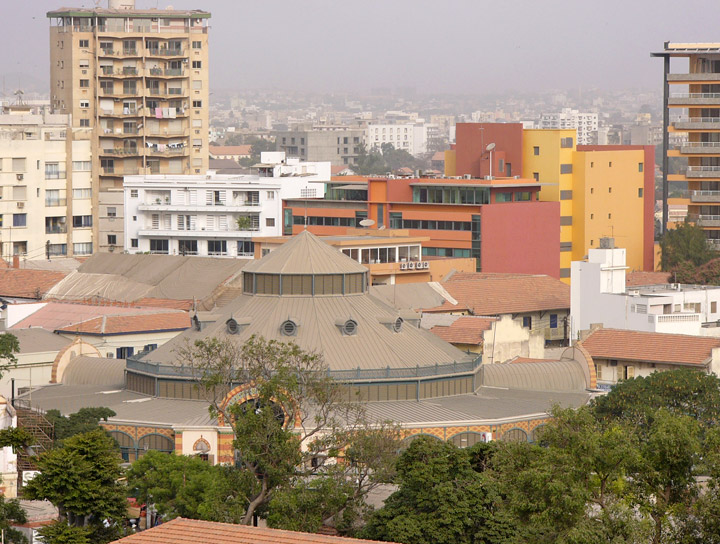 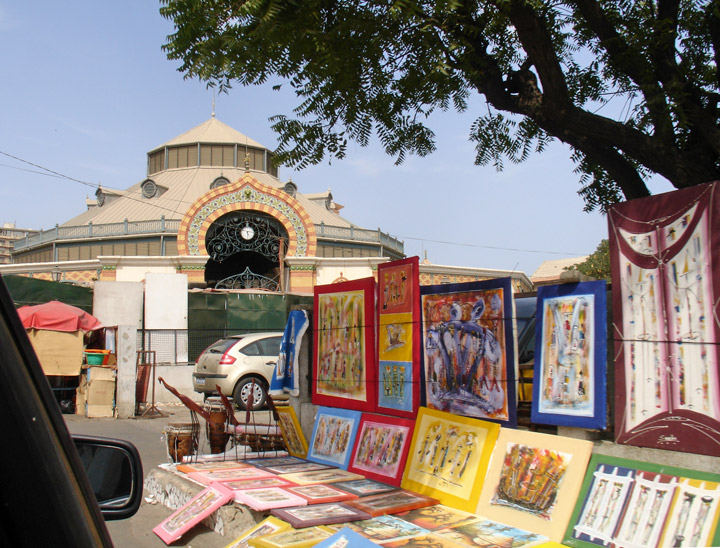 with many vendors setting up around the exterior of the market

The traditional date of the founding of Yoff, headquarters of the Layene Sufi order in northern Dakar, is 1430. Meanwhile, in 1444, the Portuguese arrived on the island of Gorée, founding a settlement there, and by 1536, had begun using it as a base for the export of slaves. By this time, the mainland of Cap-Vert, including Yoff, was under control of the Jolof Empire, as part of the western province of Cayor — which seceded from Jolof in its own right in 1549. 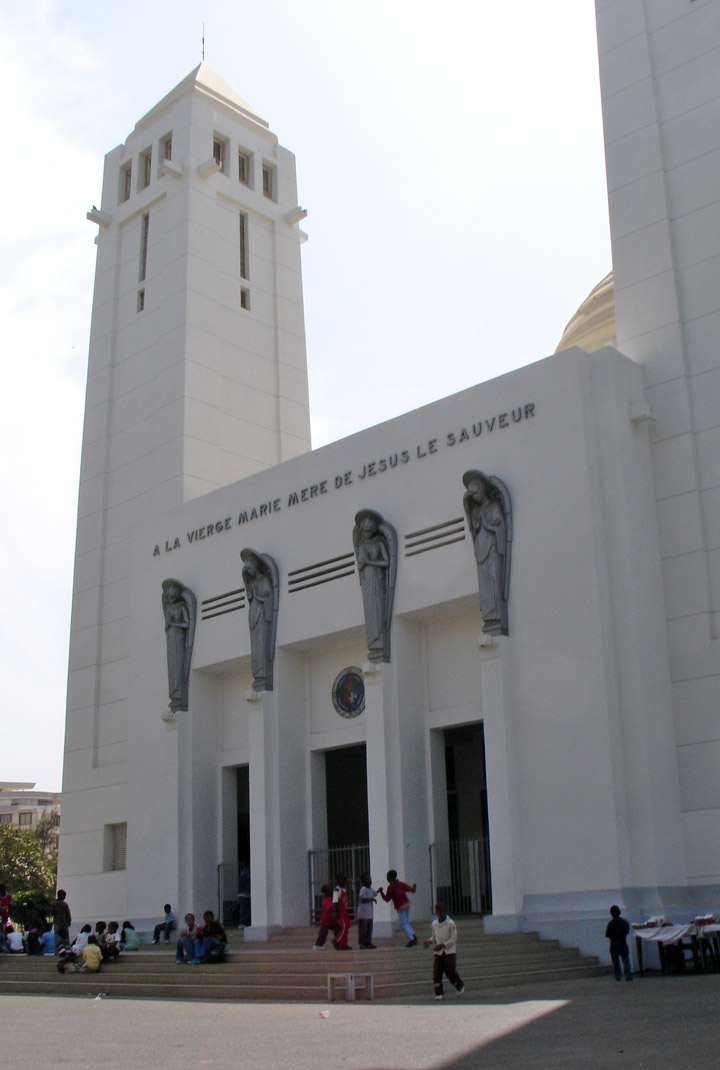 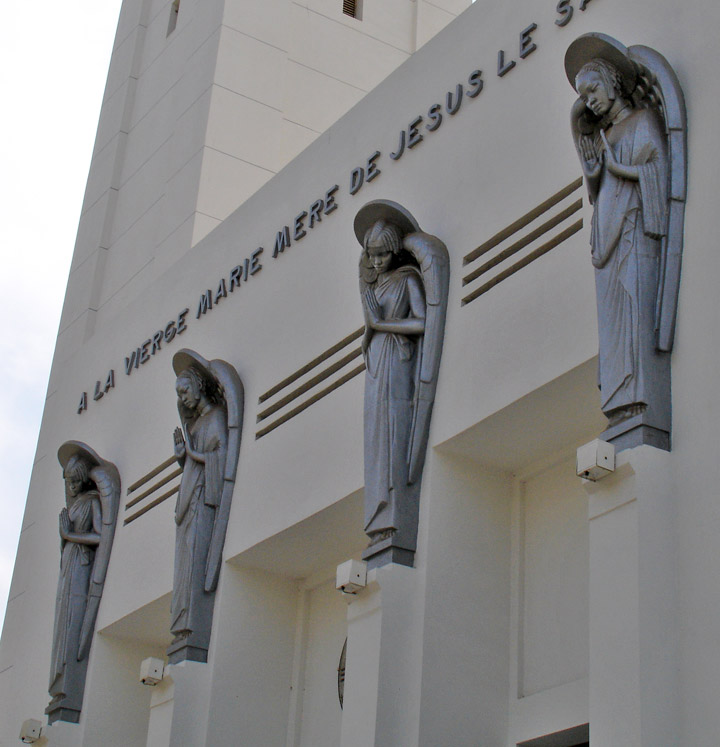 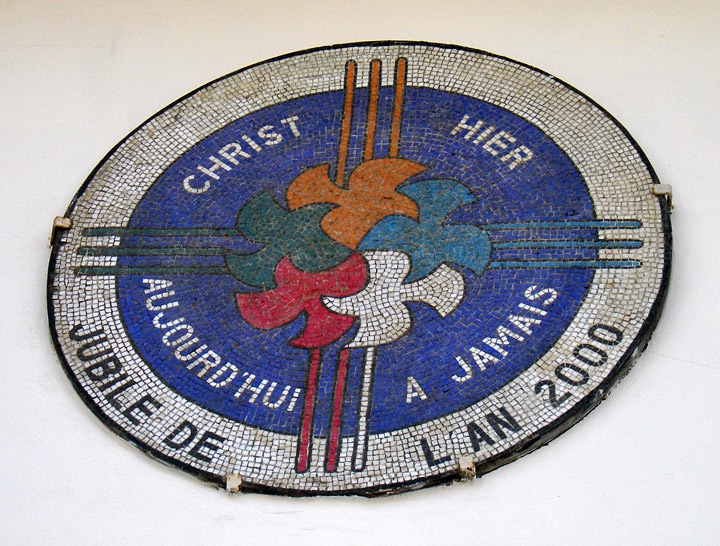 Gorée was captured by the United Netherlands in 1588, who gave it its present name (spelled Goeree, after Goeree-Overflakkee in Holland). The island was to switch hands between the Portuguese and Dutch a couple more times before falling to the English under Admiral Holmes on 23 January 1664, and finally to the French in 1677. Though under continuous French administration after that, both Dutch and French families dominated the slave trade, and the infamous "House of Slaves" was built here in 1776. The slave trade was abolished by France in February 1794. However, Napoleon reinstated it in May 1802, then finally abolished it permanently in March 1815. 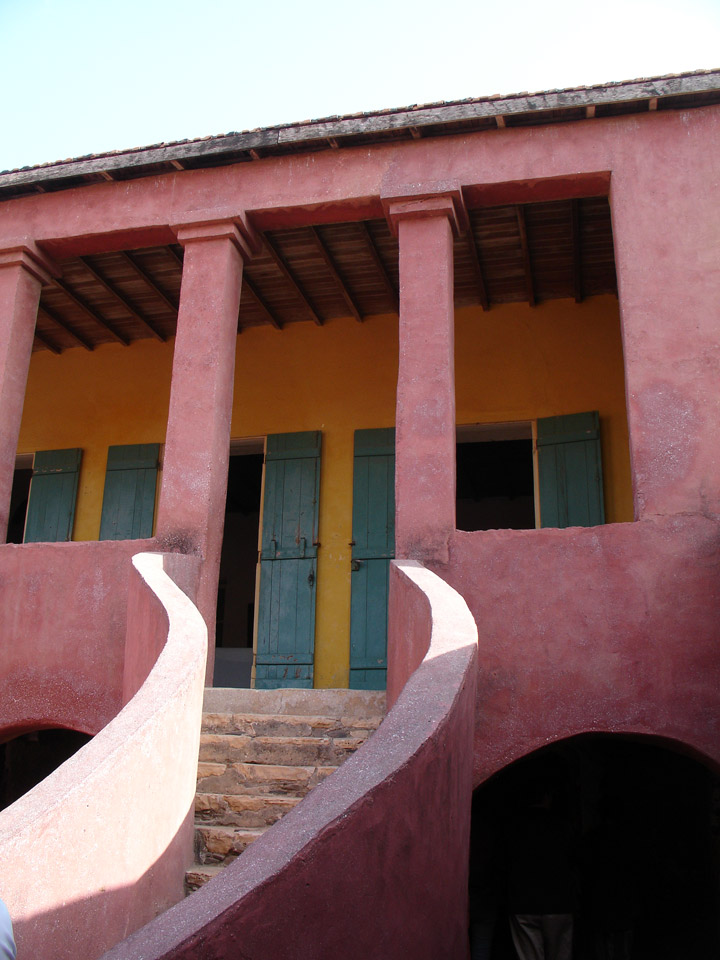 More Photos of the House of Slaves

In 1812, the political independence of the Layene at Yoff was recognized by the Kingdom of Cayor, a sort of 'theocratic autonomy' that they enjoy to this day. 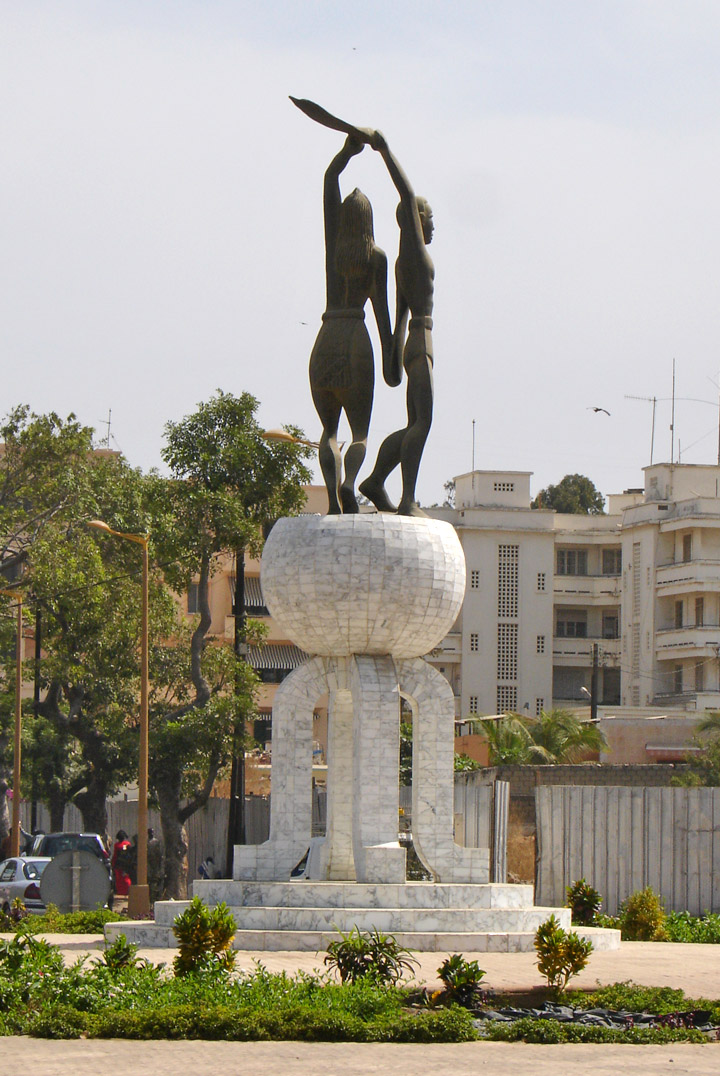 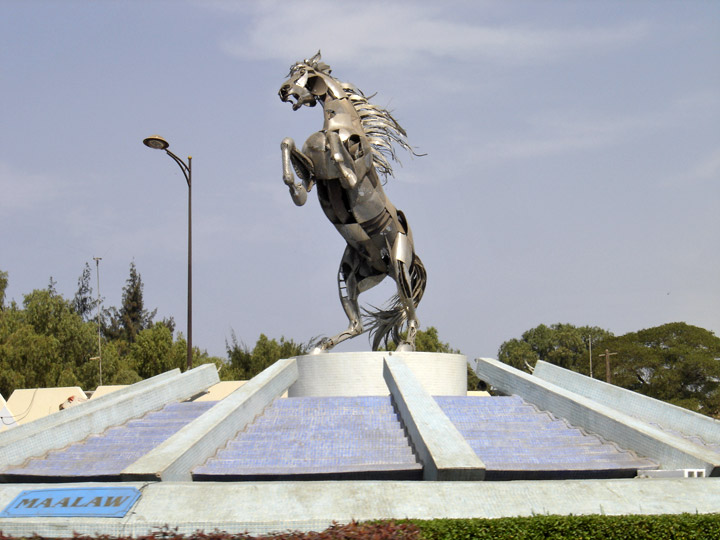 Despite Napoleon's abolition, a clandestine slave trade continued at Gorée until 1848, when it was abolished throughout all French territories. Nevertheless, the island's population grew to 6000 residents, and when the city of Dakar was formed around a French fort in 1857, most of these moved to the mainland. Under the French governor, Louis Faidherbe, the French began to expand their control over the region at the expense of Cayor. 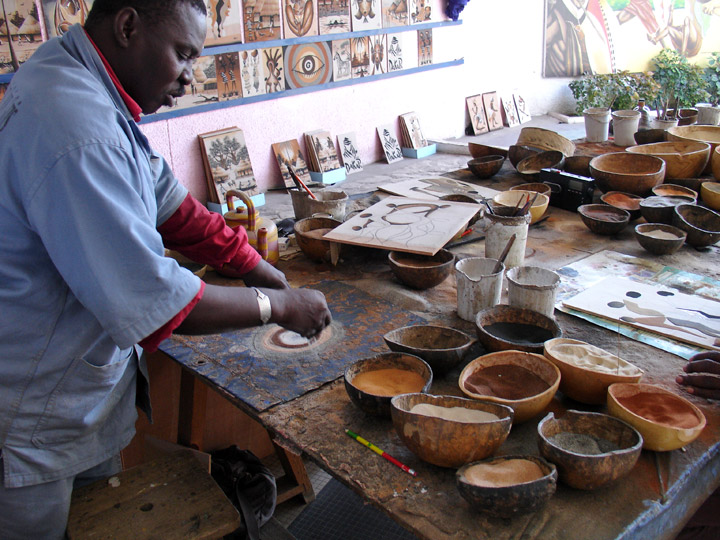 demonstrating a design made from different colored sand 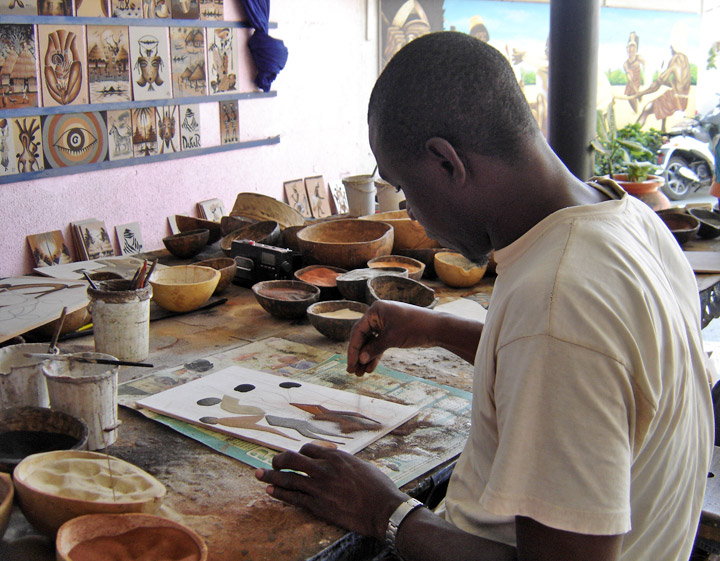 applying sand to the painting 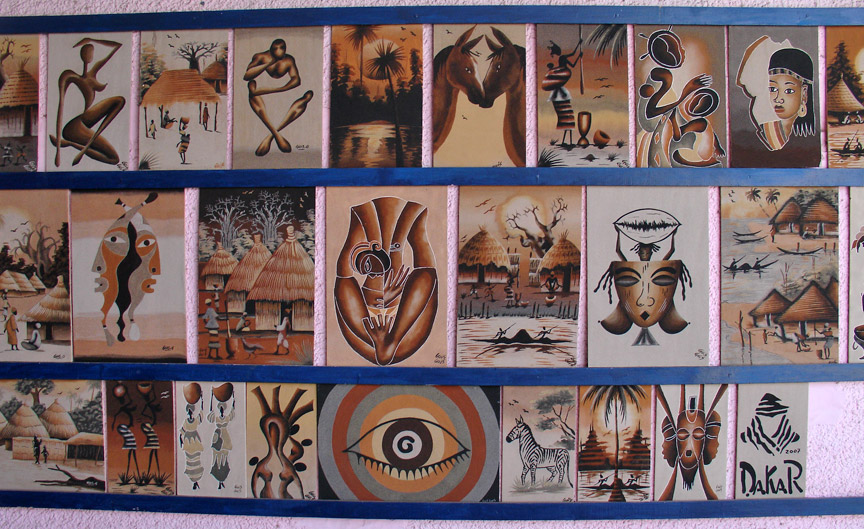 Gorée, including Dakar, was recognized as a French commune in 1872. The settlement grew as a port and railway hub, the latter opening in 1885 with a route to Saint-Louis; this train is now only used for special excursions. Dakar itself was split off from Gorée as a separate commune in 1887. 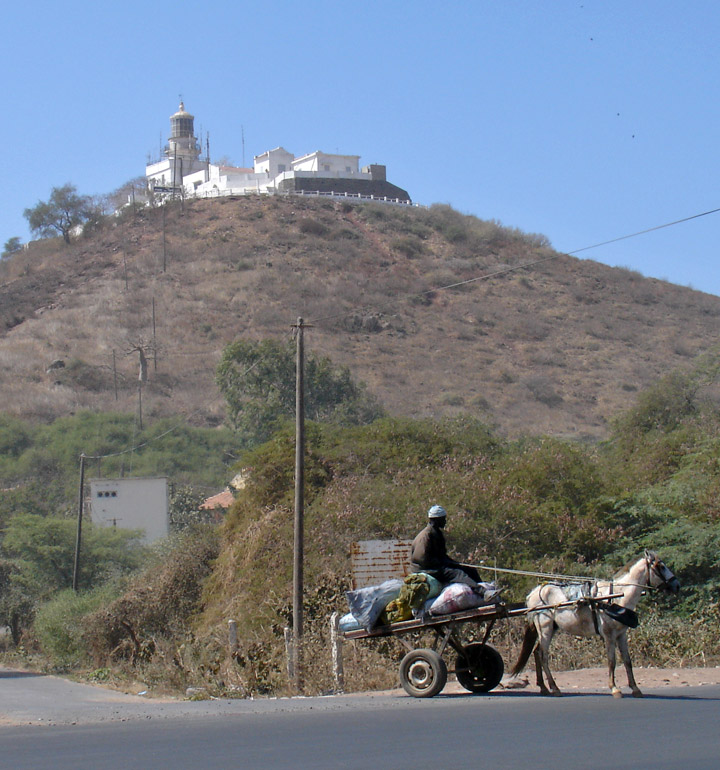 The city later became a naval base, and replaced Saint-Louis as the capital of French West Africa in 1902. In 1929, the commune of Gorée Island, now with only a few hundred inhabitants, was merged into Dakar. The Battle of Dakar took place off the coast of Dakar on September 23 - September 25, 1940. 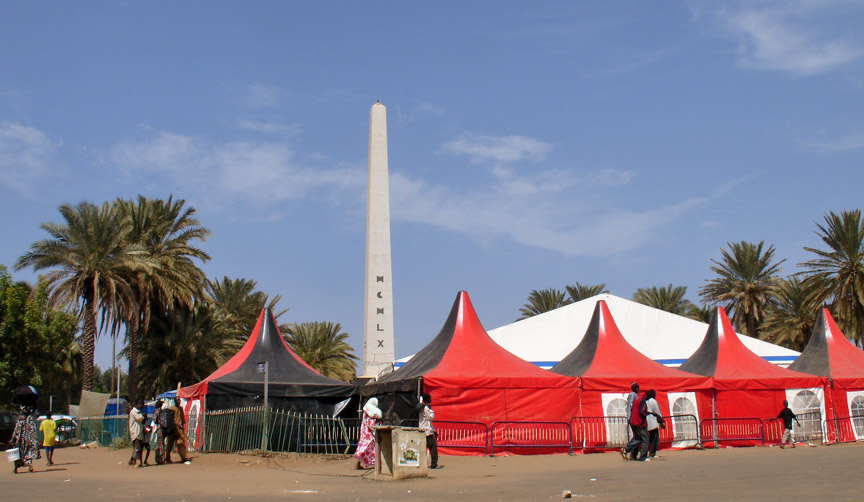 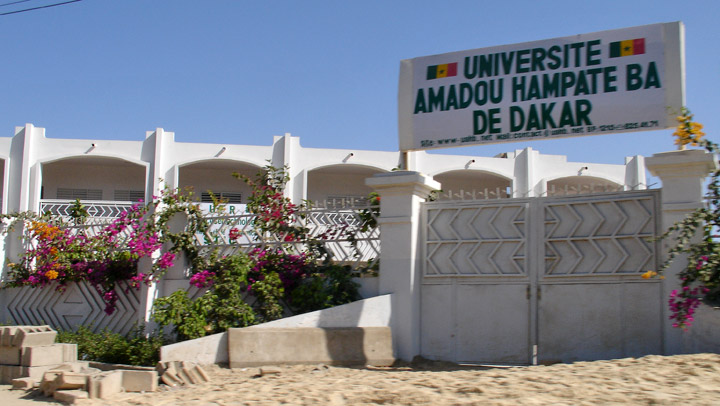 One of the New Private Universities

The Fort D'Estrees on Gorée Island, where slaves were held, auctioned, and packed onto ships, was restored by the Senegalese government in the 20th century and transformed into a museum.

A Restaurant in Dakar 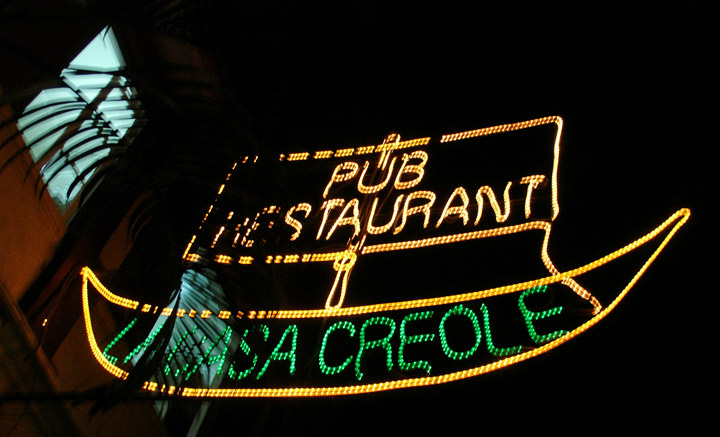 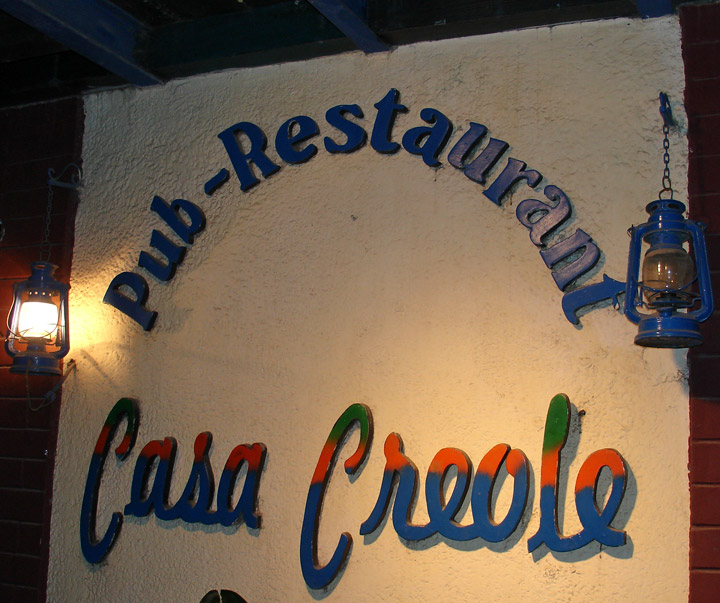 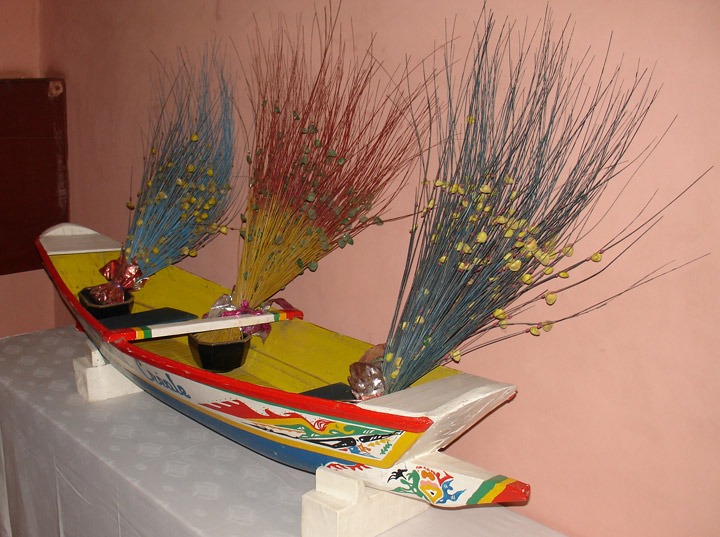 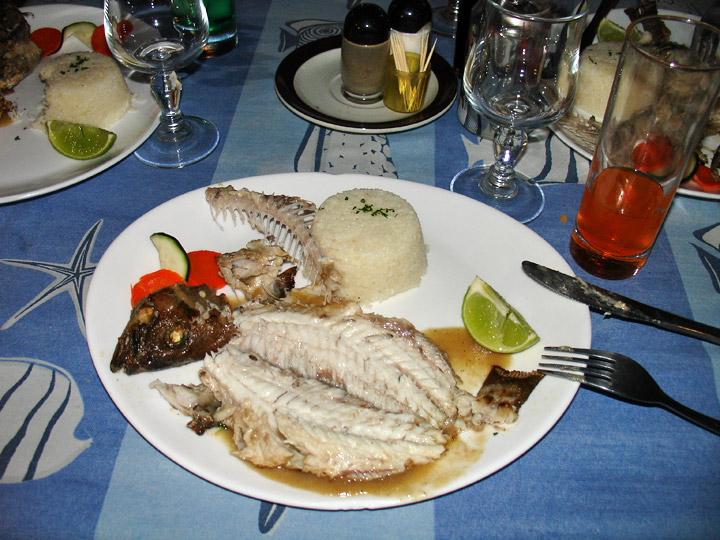 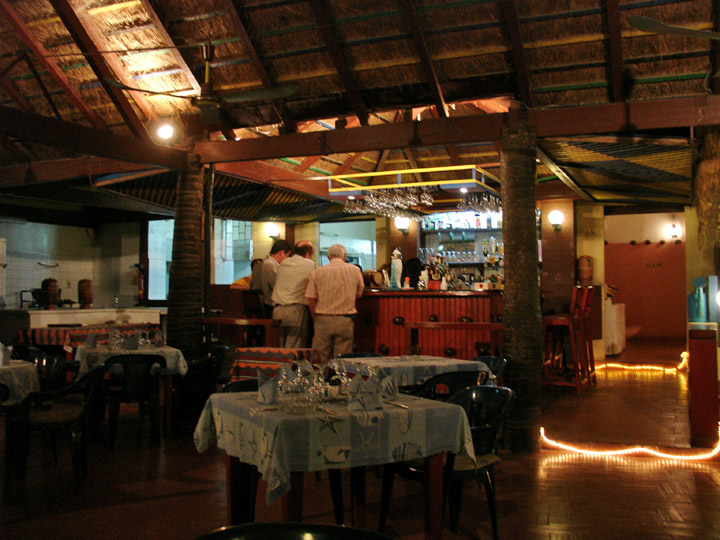 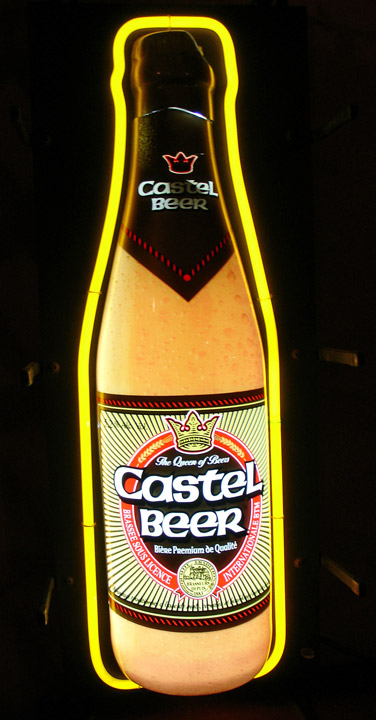