A city in the hilly southwest corner of Ohio, the seat of Hamilton County. Cincinnati is the third largest city in the state, after Columbus and Cleveland. It is the transportation, industrial, commercial, and cultural center for a region extending over southern Ohio, northern Kentucky, and southeastern Indiana. The city’s strategic location on the westward-flowing Ohio River made it a focal point for migration in the 19th century, and it was often referred to as "The Gateway to the West." It became for a time the largest city beyond the East Coast and was dubbed by poet Henry Wadsworth Longfellow as "The Queen City," a title still the city’s favorite unofficial designation.

Cincinnati is located on the north bank of the Ohio River near where it is joined by the Miami, Little Miami, and Licking rivers. The downtown of this picturesque city is built in a basin, with residential neighborhoods spread out on hills above. Its mean elevation is 208 m (683 ft). The city has a continental climate that is influenced by cold air masses from the north and warm air from the Gulf of Mexico, producing changeable weather. The average high temperature in January is 3° C (37° F) and the average low is -7° C (20° F); average high in July is 30° C (86° F) and the average low is 18° C (65° F). Each year the city averages 1050 mm (41.3 in) in precipitation, with somewhat more falling from March through July than during other months.

Shortly after it was founded in 1788, the city was renamed Cincinnati in honor of the Society of the Cincinnati, an association of officers in the American Revolution (1775-1783). The organization itself was named after Roman statesman Lucius Quinctius Cincinnatus, who legend held to be the model of virtue.

Photos from an Elderhostel program on Cincinnati

Blacks have been prominent in Cincinnati since around the time of its founding. Immigrants from Germany began coming to Cincinnati in the 1830s to escape political persecution and to seek economic opportunity.

buildings in the old German section

Today, a strong German heritage gives parts of the city a European flavor. Formed from the German immigration was a small but significant Jewish community, and in the 1870s Cincinnati became the birthplace and center of Reform Judaism in America (seeJudaism: Reform Judaism). In the 1840s many Irish moved to the city, forced from Ireland by the potato famine.

According to the 1990 census, whites are 60.5 percent of the population, blacks 37.9 percent, Asians and Pacific Islanders 1.1 percent, and Native Americans 0.2 percent. Hispanics, who may be of any race, are 0.6 percent of the people. 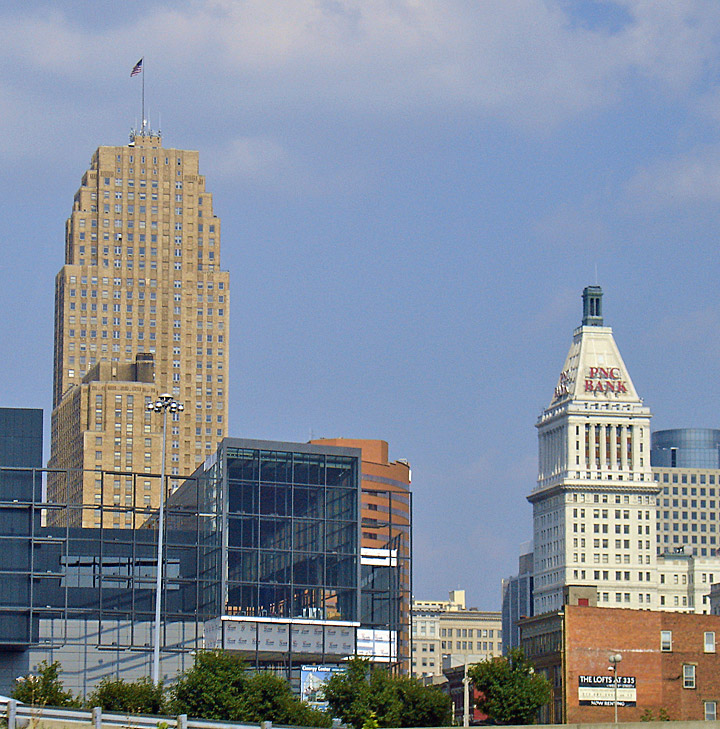 The city of Cincinnati itself covers a land area of 199.9 sq km (77.2 sq mi) and extends northward from the Ohio River across two broad terraces, which roughly parallel the riverfront. Beyond the terraces, a series of wooded hills rise in a semicircle up to 140 m (450 ft) above the level of the river. The lowland area along the river is known locally as the Basin. Mill Creek and the Little Miami River cut across both terraces in a southerly direction before joining the Ohio River. 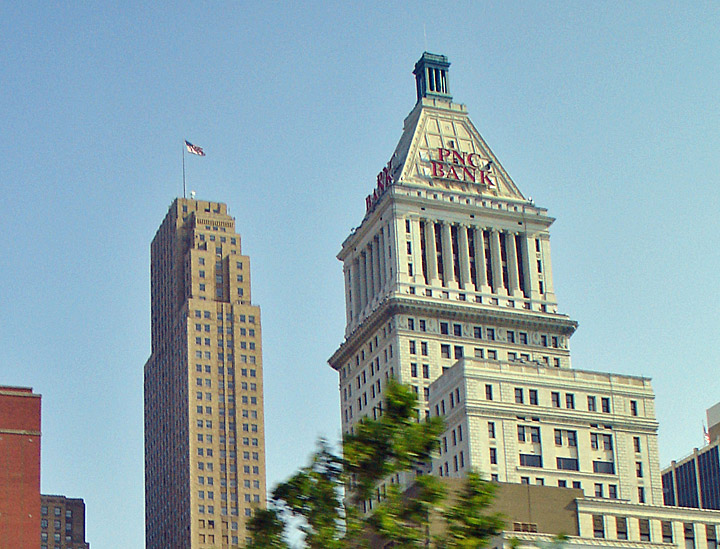 In the very core of the commercial district is the refurbished Fountain Square Plaza, dominated by the Tyler Davidson Fountain. The square is the focus of downtown Cincinnati. Spreading throughout the downtown area is a network of enclosed skywalks that provide elevated connections from building to building during inclement weather. To the west of the business district is the Queensgate area, where many light industries and distribution businesses are located. 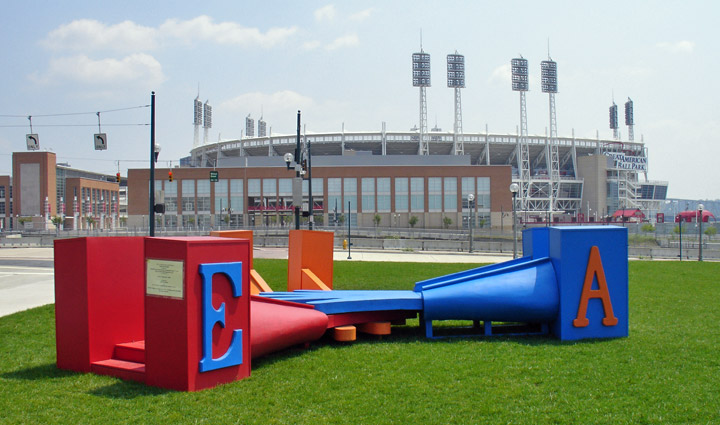 The riverfront, formerly a heavily congested region of wharves and warehouses, has been completely rebuilt. The area is now occupied by a new serpentine and terraced floodwall, the large Cinergy Stadium sports arena, a landscaped park, and Interstate 71.

The largest educational facility is the University of Cincinnati, which was founded in 1819 and became state-supported in 1977. Xavier University (1831), operated by Jesuits, and Northern Kentucky University (1968), in Highland Heights, are also leading institutions of higher education. Hebrew Union College—Jewish Institute of Religion (1875) is the oldest and among the best known of the Jewish seminaries in the United States. Other schools in the Cincinnati area include the Athenaeum of Ohio (1829), a Roman Catholic seminary; the College of Mount St. Joseph (1920), just west of the city; Thomas More College (1921), in Crestview Hills, Kentucky; and Cincinnati Bible College (1924), near the city’s downtown. 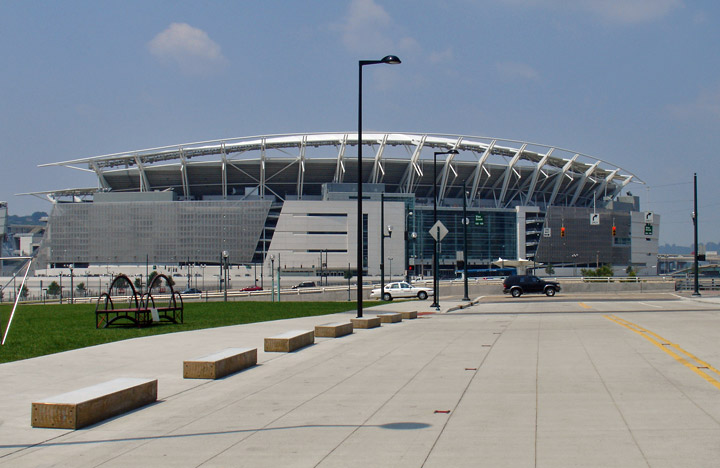 The station is noted for extensive tile murals created in the 1930s that illustrate the city’s industries. The two museums in the train station are the Cincinnati Museum of Natural History, with a replica of a cavern that includes waterfalls and a live bat colony, and the Cincinnati Historical Society Museum, which details the city’s growth. Eden Park is the location of the Cincinnati Art Museum, which contains among its many collections a number of paintings by American and European masters. The birthplace and early home of the 27th president of the United States is preserved at the William Howard Taft National Historic Site. Closer to downtown is the Taft Museum.

Located in the Taft family’s home, it has an outstanding art collection assembled by Charles P. and Annie Taft.

The Cincinnati Music Hall, located near Washington Park, is the home of the Cincinnati Symphony, and the city supports opera and ballet companies. Many performances are given in the River bend Music Center, an amphitheater on the bank of the Ohio River.

The largest of Cincinnati’s many parks and playgrounds is Mount Airy Forest Park, occupying 5.9 sq km (2.3 sq mi) in the northwestern part of the city. Krohn Conservatory, located in Eden Park, is one of the nation’s largest public greenhouses. It exhibits hundreds of rare and exotic plants. The Cincinnati Zoo and Botanical Gardens is one of the largest in the United States. The zoo was among the first to house animals in natural surroundings. To the northeast of the city is Kings Island, a large theme park.

Cincinnati is home to two major professional sports teams, the Cincinnati Reds (baseball) and the Cincinnati Bengals (football). Both play in Cinergy Stadium (renamed from Riverfront Stadium in 1996). In 1996 voters approved construction of a new football stadium. Because the Reds are the oldest professional baseball team, the opening day game is played in Cincinnati. One of baseball’s greatest players, Pete Rose, who was born in Cincinnati, both played and managed the Reds. The basketball teams of the University of Cincinnati have enjoyed considerable success in the 1990s.

Cincinnati, from its earliest beginnings, has functioned as a major port on the Ohio River. Distribution of raw materials as well as manufactured goods is one of the city’s chief economic activities. Although Cincinnati remains one of the world’s leading centers for the distribution of bituminous (soft) coal, this trade is gradually declining. Coal from Kentucky and West Virginia is shipped by river craft to Cincinnati and is then distributed to industrial centers along the Great Lakes, as well as to Cincinnati’s own plants. In addition, the city serves as a distribution point for numerous manufactured goods sold in surrounding regions.

Cincinnati is a crossroads of many of the nation’s primary transportation routes. Three major interstate freeways intersect in the city: Interstate 75, one of the nation’s leading north-south routes; Interstate 71, connecting the city to Ohio’s other largest urban centers and to Louisville, Kentucky; and Interstate 74, tying the city to Indianapolis, Indiana. Three leading railroad lines also converge on Cincinnati. The city is served by Cincinnati-Northern Kentucky International Airport, a major airline hub, located on the Kentucky side of the Ohio River.

Cincinnati has been governed by a council-manager form of government since the 1920s. The council consists of nine members elected to two-year terms. The council member garnering the largest number of votes serves as mayor, a largely ceremonial post. The city council also appoints a city manager, who acts as the administrative head of government. Hamilton County is governed by a three-member elected commission.

theater in old German district
(being renovated to apartments)

Losantiville, one of the first permanent European settlements in Ohio, was established on the site of present-day Cincinnati in 1788. It began to attract settlers after 1789, when an army post named Fort Washington was built nearby. In 1790 the community was renamed Cincinnati. The settlement was recognized as a village in 1802 and incorporated as a city in 1819. 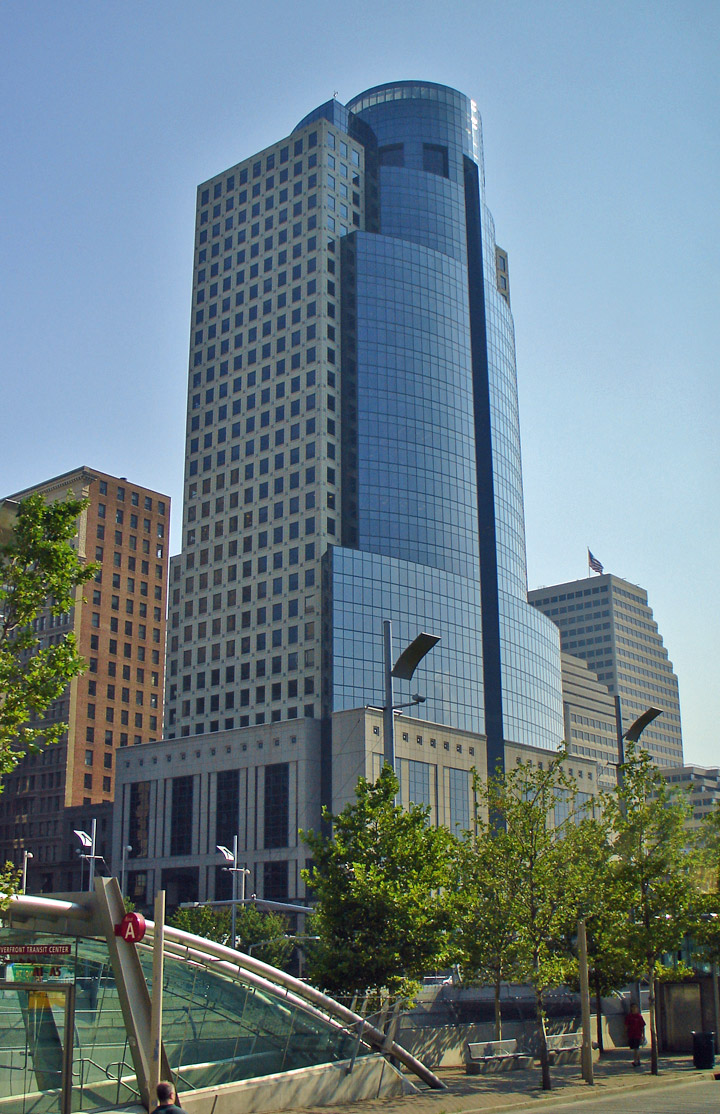 Not only was Cincinnati strategically situated to benefit from westward migrations, it also became a major center for north-south commerce, both overland and by water. The Ohio River was a primary route connecting the East with the nation’s growing frontier, particularly after steamboat travel began in 1811. The Miami and Erie Canal later tied the city to Great Lakes shipping. It has been aptly remarked that Cincinnati is the "northernmost southern city and the southernmost northern city."

Cincinnati’s extensive ties to the South provoked a mixed reaction to the American Civil War (1861-1865). The city was a center of activity by the Copperheads, a name applied to people who for a variety of reasons opposed fighting the war. At the same time, the city was a major point on the Underground Railroad, the informal system to move slaves from the South to freedom in the North.

During and immediately after the Civil War, the economy of the city suffered as trade with the South was disrupted. At the same time, westward traffic began to bypass the city as new railroads made Chicago the region’s principal crossroads. The city’s economy revived only slowly. In an attempt to reinvigorate trade with the mid-South, the city constructed a railroad to Chattanooga, Tennessee. This railroad, the Southern, is the only long-distance line ever owned by an American municipality.

The late-19th century was characterized by municipal corruption. A series of notorious bosses—the leaders of the city’s political party organizations—manipulated city contracts and services for their own monetary gain. The power of the organizations, called political machines because of their ability to create large numbers of votes for selected candidates, was not broken until the mid-1920s when a city-manager form of government was introduced. In a different political direction, the public service record of the Taft family stretches over four generations. Alphonso Taft served in several federal political positions, including attorney general and secretary of war under President Ulysses S. Grant. His descendants include William Howard Taft, 27th president of the United States and later chief justice of the United States Supreme Court; and his son and grandson, Robert A. Taft and Robert Taft, Jr., both of whom served as U.S. Senators.

renewal project
(painting on side of a building)

An aggressive program of urban renewal and redevelopment began in the mid-1960s and continued through the 1970s, revitalizing the central business area and especially the riverfront district.