Big Swatara church of the Brethren 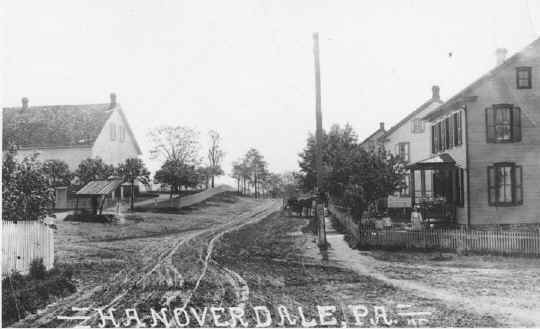 before the road was paved 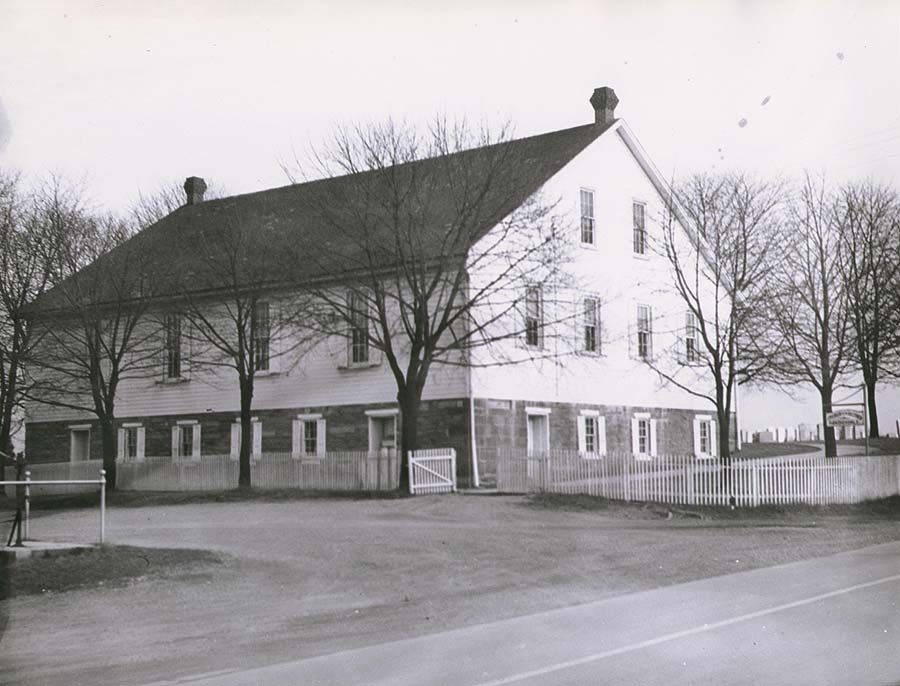 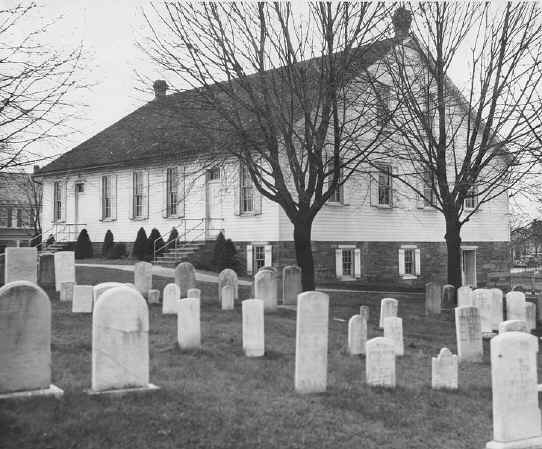 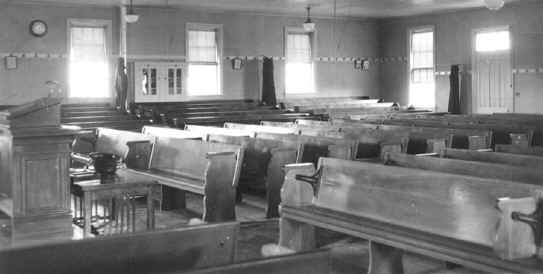 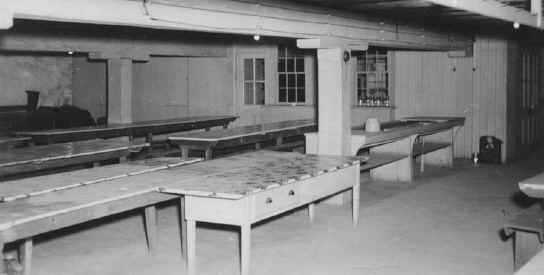 Basement of the old church. The enclosed area at the right was
the kitchen. 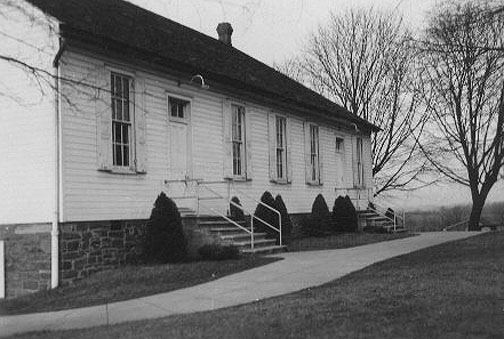 Door to the Cemetery 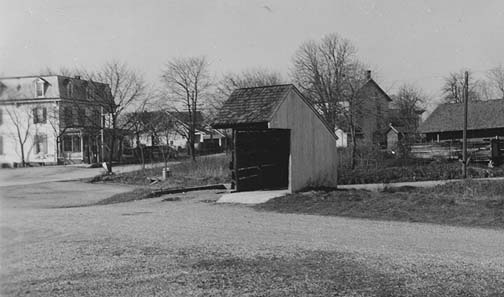 shed maintained for Rev. Patrick's horse and buggy
(Davy Etter was the last to use)

erected by the German Baptists
1860

Did you ever look at the walls of our church? The large stones that were used men got them loose in quarries with picks and dynamite. Then they lifted and loaded them on wagons. Wagons were made that had a box top on that could be lifted off for such work. Heavy plank was used for the bottom. Generally four horses or mules were hitched up to pull them. It would be nice if we knew what such a stone like the comer stone weighed
and how long it took to build the wall.

The first church built here was in 1860. Built large enough to have Love Feasts in. Before, they had it in barns always in the summer. In September 1896 a hurricane which I remember passed through in the night and the Hanoverdale Church House was partly demolished. The whole west end was blown in so the church decided to tear it down and build it larger using the stones I mentioned earlier for the walls.

The church and cemetery were fenced in with pale (picket) fence, which every spring had to be whitewashed. The parking lot was not paved. Had sheds down there where the evergreens are so people could tie their horses in out of the weather, sun, rain, or snow. Different ones built their own sheds. Where you play volley ball there was a large shed where on Lovefeast all day the horses were unhitched and taken there to feed as they had
troughs in there and feed. Had a man that attended to that work.

Had our revivals mostly in winter time so people had time to attend. Sometimes they waited till spring to baptize the converts and sometimes they wanted to be baptized right away. The baptizing was done mostly back here in the Manada Creek around Sam Grubb's and Alva Saufley's place. One winter it was so cold the ice had to be cut
open to make a hole to baptize. It was 18-20 inches thick. In 1899 while David Etter was baptizing his grand daughter which was Mrs. Minnie Grubb, he had her dipped two times then he fell over into the water. Men ran
into the creek and got him out but he was dead. (Today we would say he had a heart attack.) I was there and saw it. Quite an excitement. They put him in a 2-horse and drove as fast as they could go.

Had a pump in the cellar of the church to get our water to use for lovefeast. Had a pump and well out on parking lot but the water was not very good and it got dry with a lot of use. Kitchen was at west end of basement. Had two wood furnaces. Large kettles to make soup and all silver ware, coffee pots and kettles were kept in a chest in the attic. For lovefeast when preparations day came around those things had to be carried down then up again after Lovefeast was over. 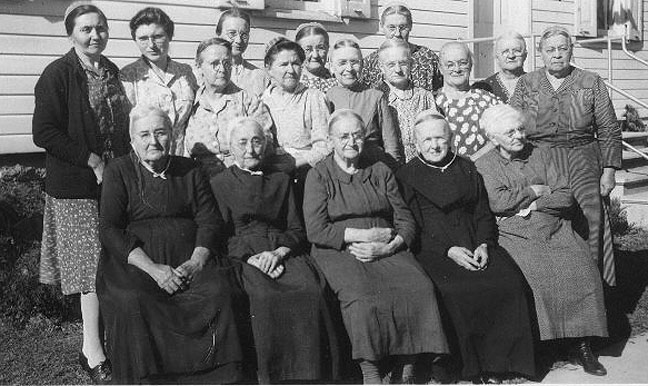 Ladies of the Church

On the attic there were about 12-18 beds. There was a partition through the middle, one side for the men and the other for the ladies. On preparation day the beds were made up to sleep in. The mattresses had to be filled up mostly with straw. People used to drive for miles to come to the two-day lovefeast so they stayed overnight. Also had breakfast at the church. On the women's side were about 6 or more cradles for the babies. I used
to help take care of them during the day, when they got fretful. That was the nursery. My bro's and sisters and others stored the filled straw bags on top of each other on one of the beds and made it mouse proof from bottom.

Church had two large pot bellied stoves, one on men's side, one on the women's as the men and women did not sit together at that time. Pulpit was on side facing parking lot. Benches much like we have now through middle of the church with one aisle between them, an aisle at side and raised seats up to windows. Later on, we had two pipeless furnaces instead.

Had coal oil lamps that were pulled up and down and some fastened to windows back of the table. A long table was along the front and the preachers sat on the bench back of it. On either side the short benches run the other way. The deacons sat there. And that is where the children's classes were for Sunday School. Had no Sunday School rooms or curtains. Some classes were up on raisings, the rest one or so on benches in between. The first Sunday School at Hanoverdale was in 1876.

No music. The chorister just started to sing where she or he was sitting. Many times the preachers started songs when they preached. When there were funerals at church, it was arranged that they ate the meal in the basement. There women and men of the neighborhood cooked and baked and prepared what they needed for friends and relatives, sometimes a few hundred.

Always remember people had to drive with horse and buggy. Took a long time to come and go back. It took us 1 hour and 15 minutes to 1 hour and 30 minutes depending on the horse and roads. No paved roads and lots of mud. To come from Paxton, we had to get up early and start early. In winter time had to heat bricks and wrap them in burlap bags to put our feet on to keep warm and a lot of blankets. When the horses were tied in the shed they had to have horse blankets on them, some with buckels on so they could be buckled so they would not slip off. 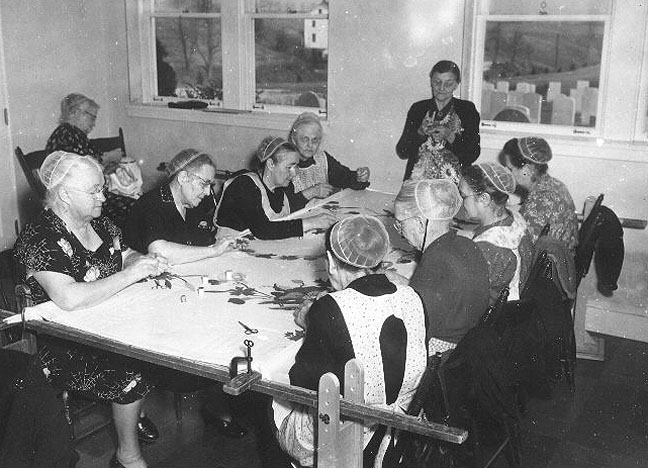 First had ladies' aid on quilting in front of church, then had to take it out of frame and carry everything up in attic. Later a room was built for them in the basement. I did not attend then. 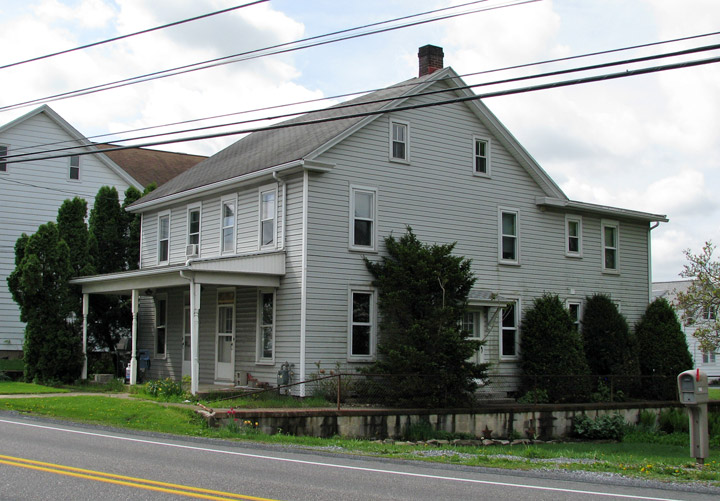 house (left side) where Grandma Frysinger lived across from the church

Lower door of basement went out about where door goes into the kitchen. Had lawn around church and big trees along cemetery. Had gravelstone walks. A lady told them if they made walks this year she will give the money to make them so they got on job and made walks all around church. Had to tear the ones away on east side when a piece was built on church in 1949. Had fence between church and parking lot and large trees.

Church yard and cemetery were fenced in. Used to have to whitewash it every spring at lovefeast time. The younger ones would whitewash while the rest got ready for lovefeast. Do you know what whitewash is? Get limestone at quarry, slack it, put in barrel, pour water on it when it boiled. The toilet was up in the cemetery in corner. Later the one down where below garage was built where the maple is down here, the one you use
some at day camp. 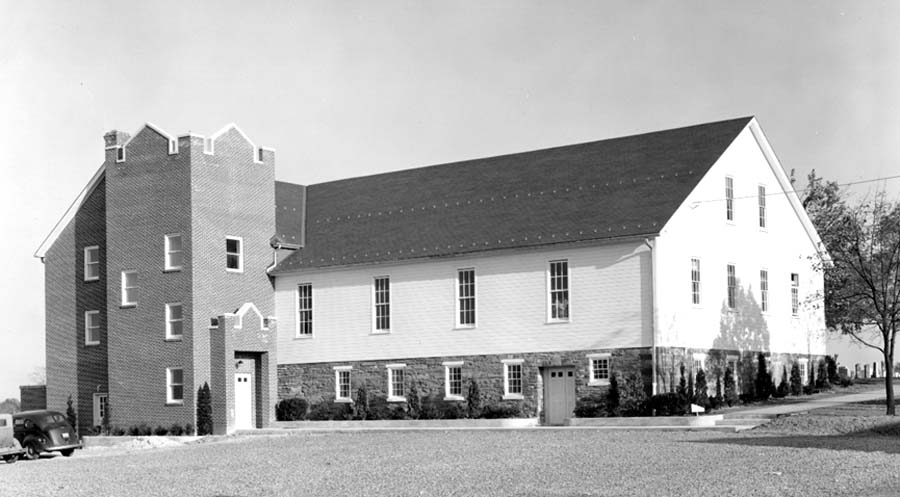 after the addition made in 1949 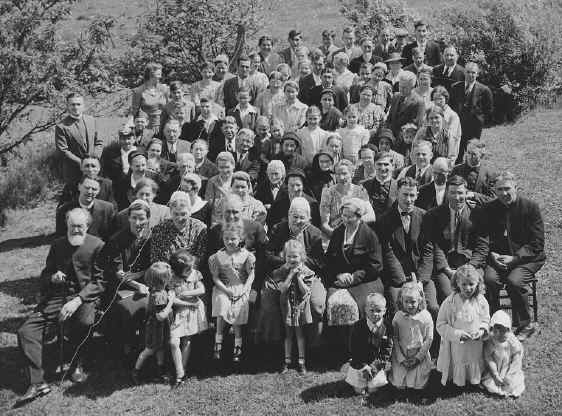 members of the congregation 1940's
(celebration for Brother Patrick,
his 50th Anniversary as minister) 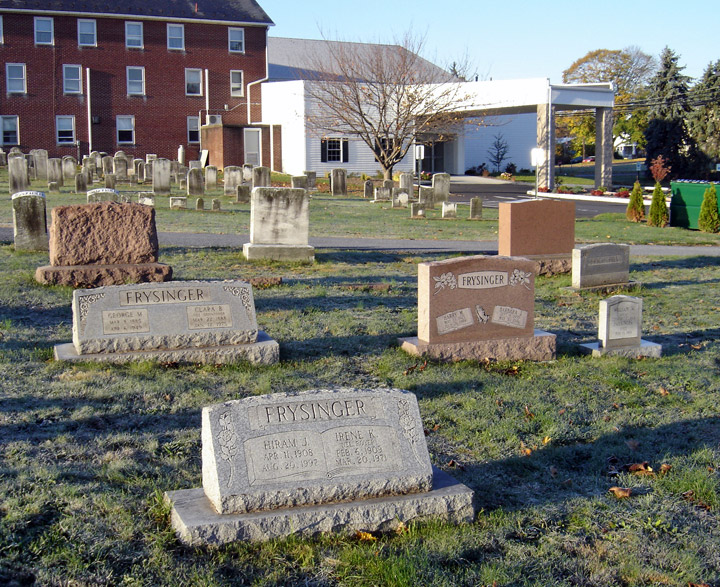 after the addition in 2005
(grave markers of my father, mother and grandfather, grandmother in foreground) 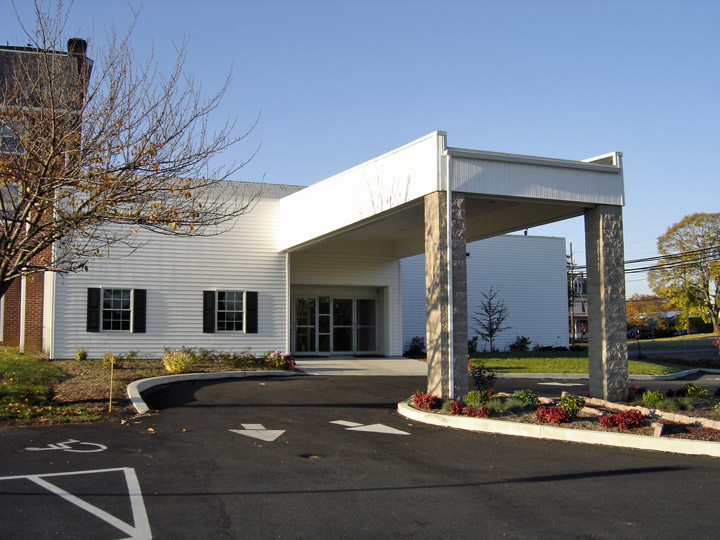 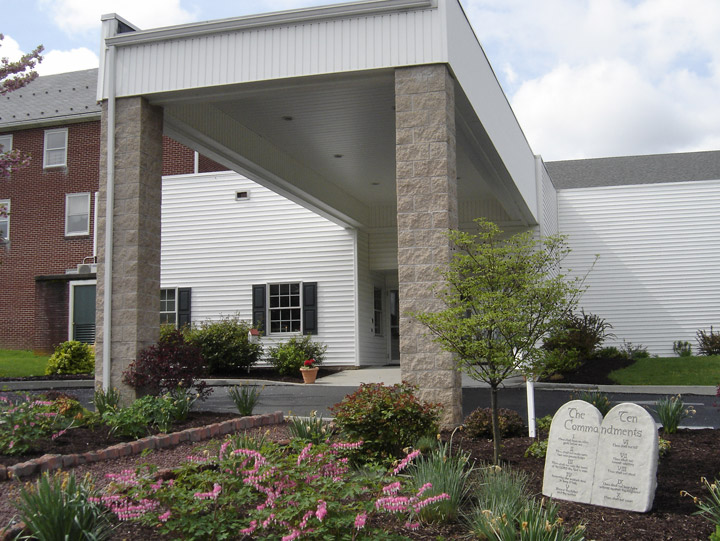 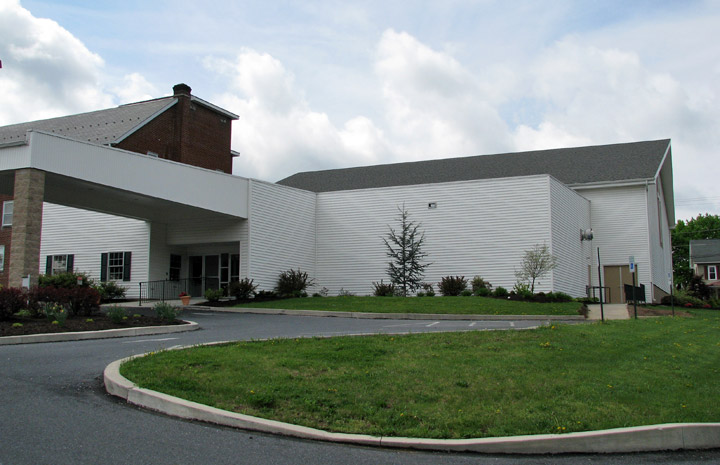 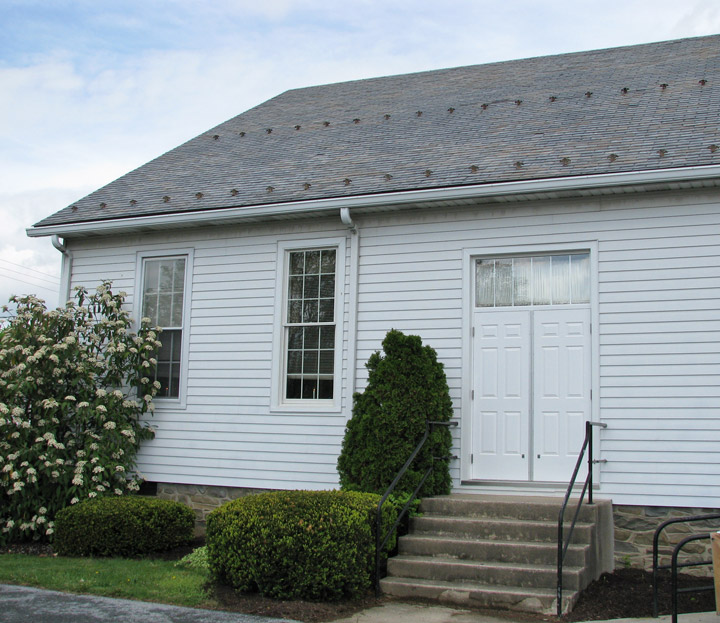 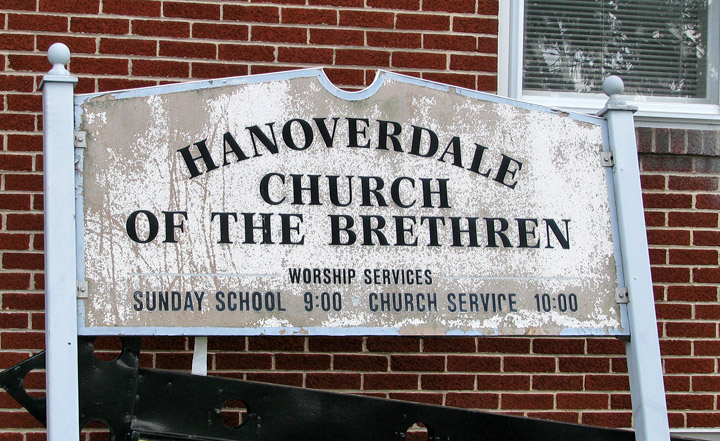 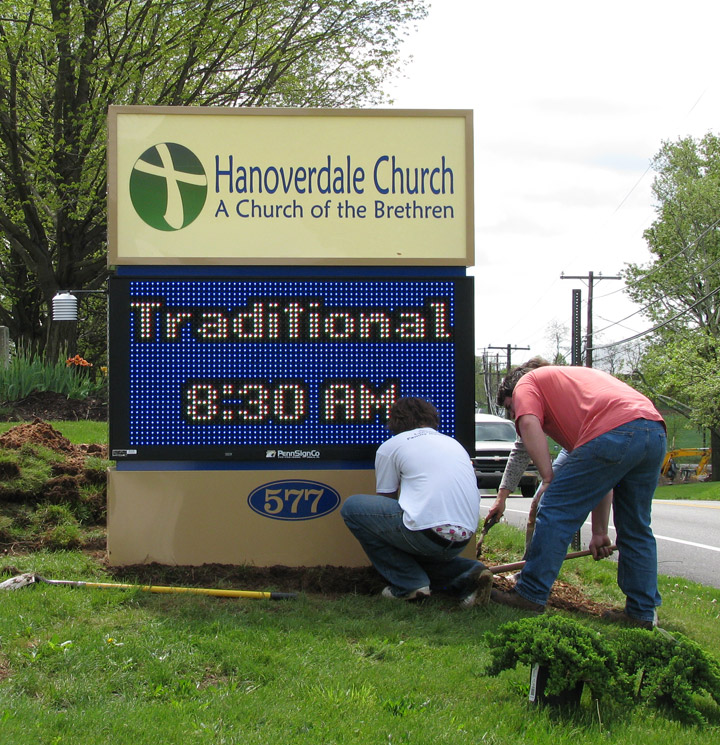 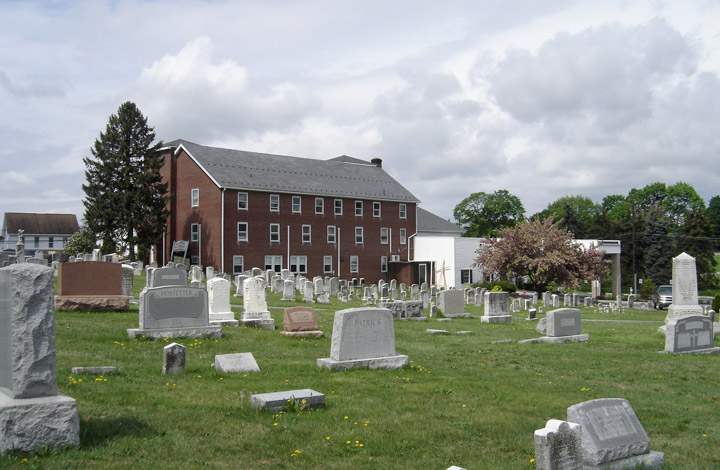 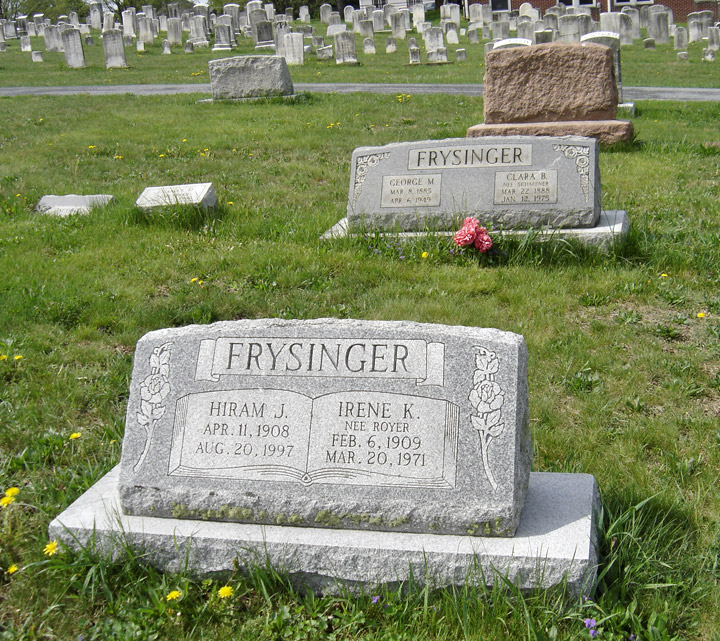 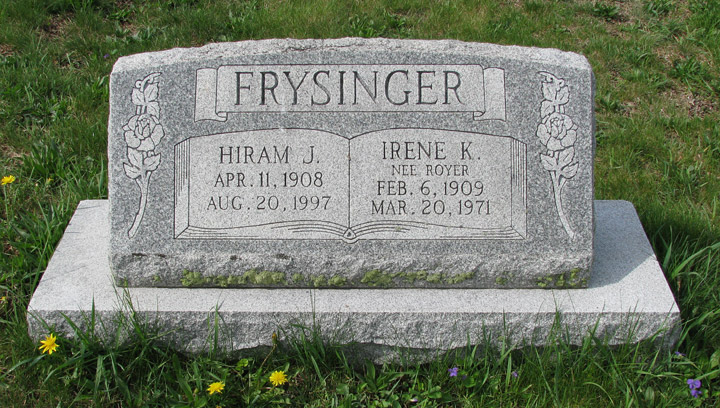 My father and mother 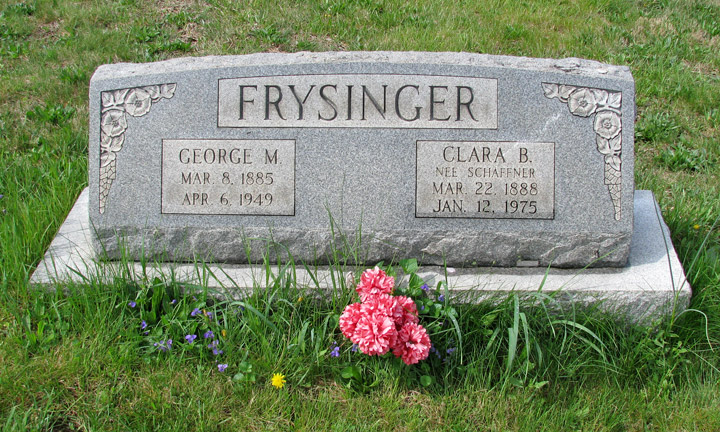 My grandfather and grandmother 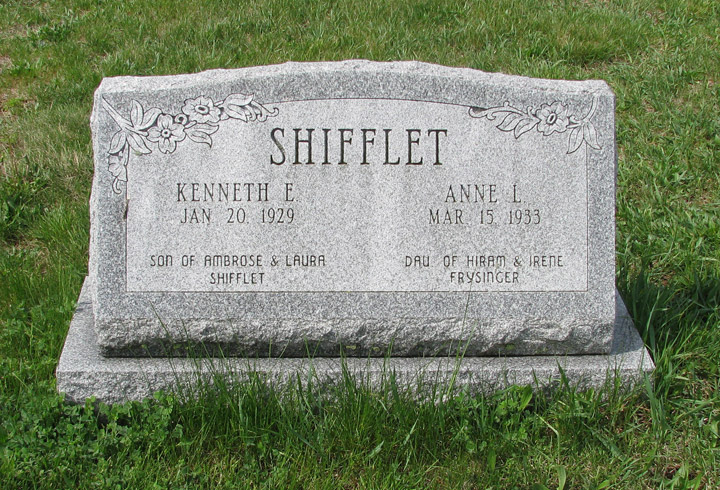 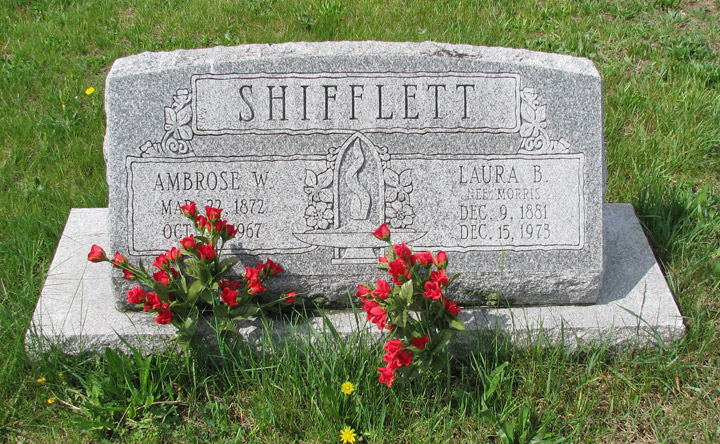 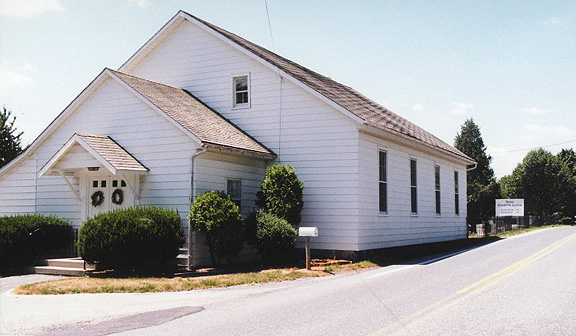 Where Grandmother Clara Frysinger served as a Sunday school teacher for many years. 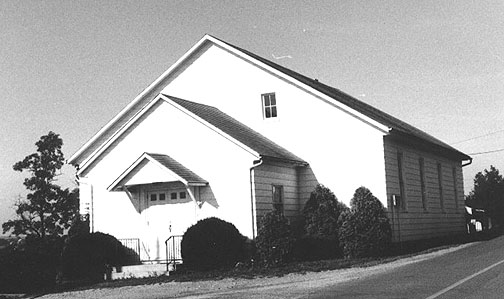 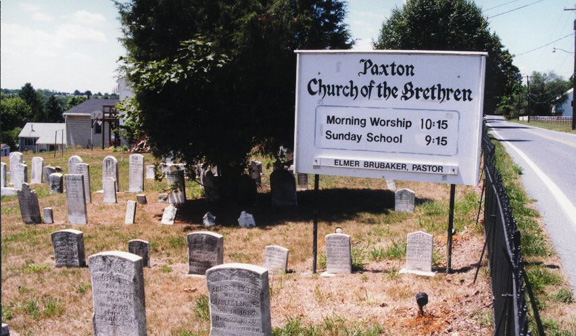 Return to Life and Interests