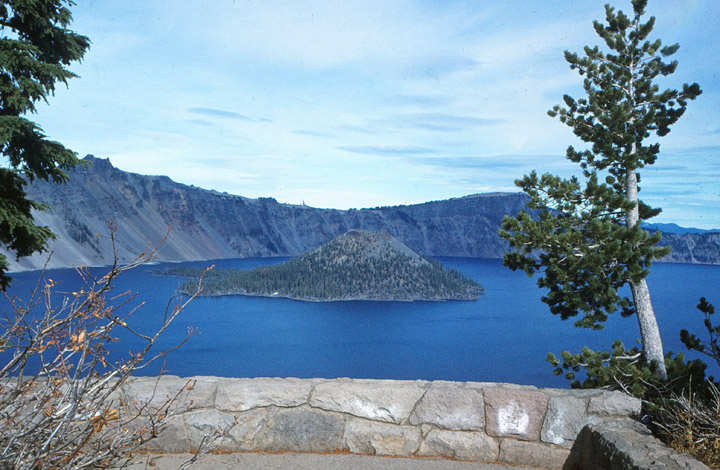 Crater Lake is a caldera lake in the U.S. state of Oregon. It is the main feature of Crater Lake National Park and famous for its deep blue color and water clarity. The lake partly fills a nearly 4,000 feet (1,220 m) deep caldera that was formed around 5,677 (± 150) BC by the collapse of the volcano Mount Mazama. 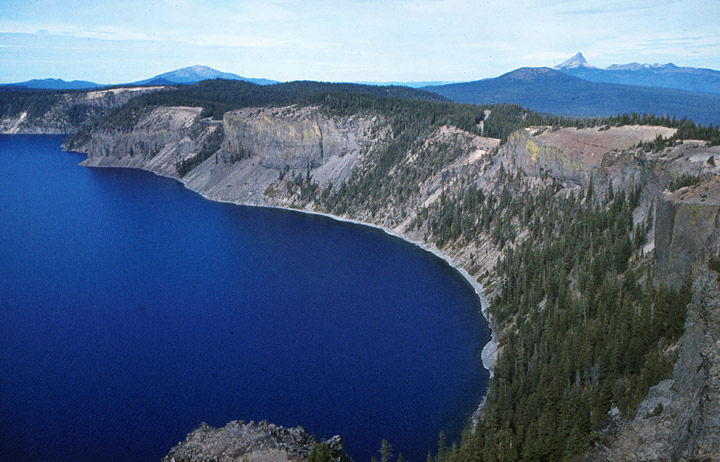 On June 12, 1853, John Wesley Hillman was reportedly the first European American to see what he named "Deep Blue Lake" in Oregon. The lake was renamed at least three times, as Blue Lake, Lake Majesty, and finally Crater Lake.

Crater Lake is known for its famous piece of driftwood named the "Old Man of the Lake." It is a full-sized tree that has been bobbing vertically in the lake for more than a century. Due to the cold water of the lake, the tree has been rather well preserved. 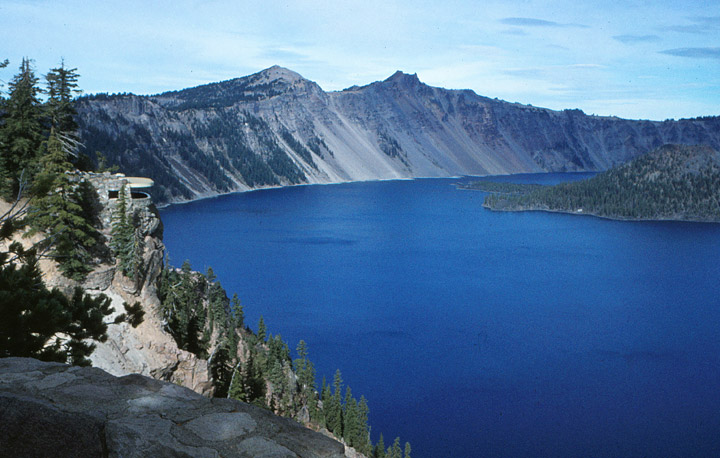 While having no indigenous fish population, the lake was stocked from 1888 to 1941 with a variety of fish. Several species have formed self sustaining populations.

The commemorative Oregon State Quarter, which was released by the United States Mint in 2005, features an image of Crater Lake on its reverse side. 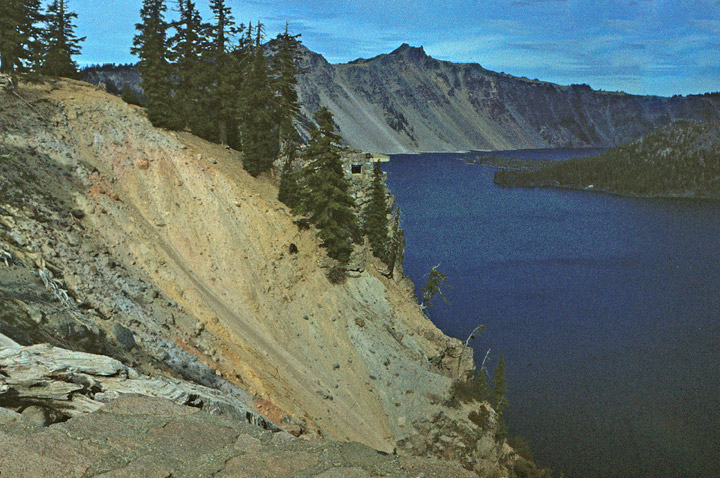 The lake is 5 by 6 miles (8 by 9.6 km) across with an average depth of 1,148 feet (350 m). Its deepest point has been measured at 1,949 feet (594 m) deep, though as with any lake its depth fluctuates with the climate, particularly rainfall.[8] This makes Crater Lake the deepest lake in the United States, the second deepest lake in North America (Great Slave Lake is the deepest) and the ninth deepest lake in the world (Lake Baikal is the deepest). Crater Lake is often cited as the 7th deepest lake in the world, but this result excludes the recent discovery of subglacial Lake Vostok, which is situated under nearly 13,000 feet (4000 m) of Antarctic ice, and the recent soundings of O'Higgins/San Martín Lake, which is located on the border of Chile and Argentina. 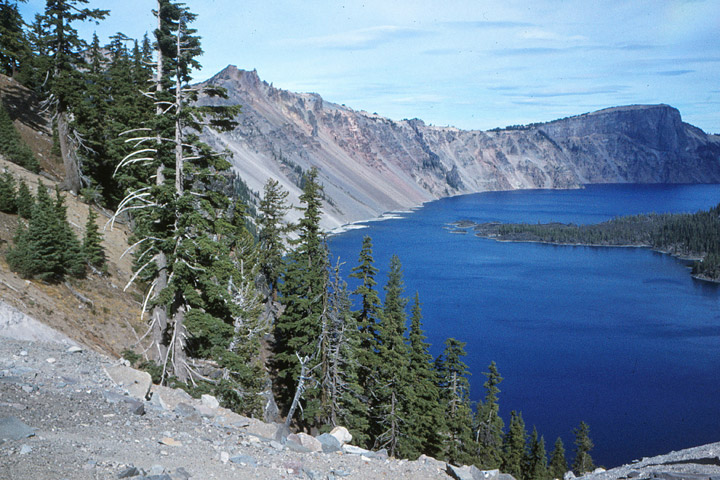 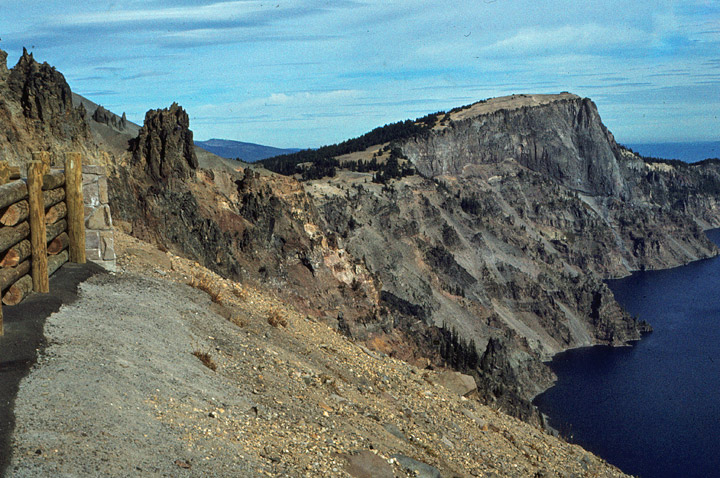 Mount Mazama, part of the Cascade Range volcanic arc, was built up mostly of andesite, dacite, and rhyodacite over a period of at least 400,000 years. The caldera was created in a massive volcanic eruption that lead to the subsidence of Mount Mazama around 5700 BC: about 50 cubic kilometers (12 cubic miles) of rhyodacite was erupted in this event. Since that time, all eruptions on Mazama have been confined to the caldera. 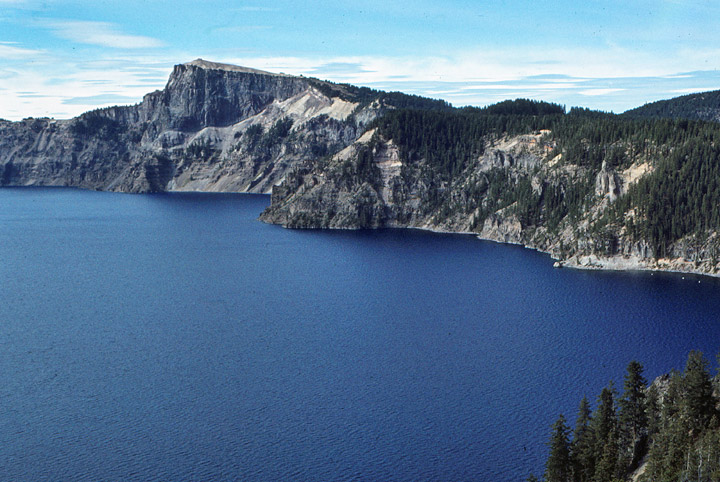 In time, the caldera cooled, allowing rain and snow to accumulate and eventually form a lake. Landslides from the caldera rim thereafter formed debris fans and turbidite sediments on the lake bed. Fumaroles and hot springs remained common and active during this period. Also after some time, the slopes of the lake's caldera rim more or less stabilized, streams restored a radial drainage pattern on the mountain, and dense forests began to revegetate the barren landscape. It is estimated that about 720 years was required to fill the lake to its present depth of 594 m. Much of this occurred during a period when the prevailing climate was less moist than at present 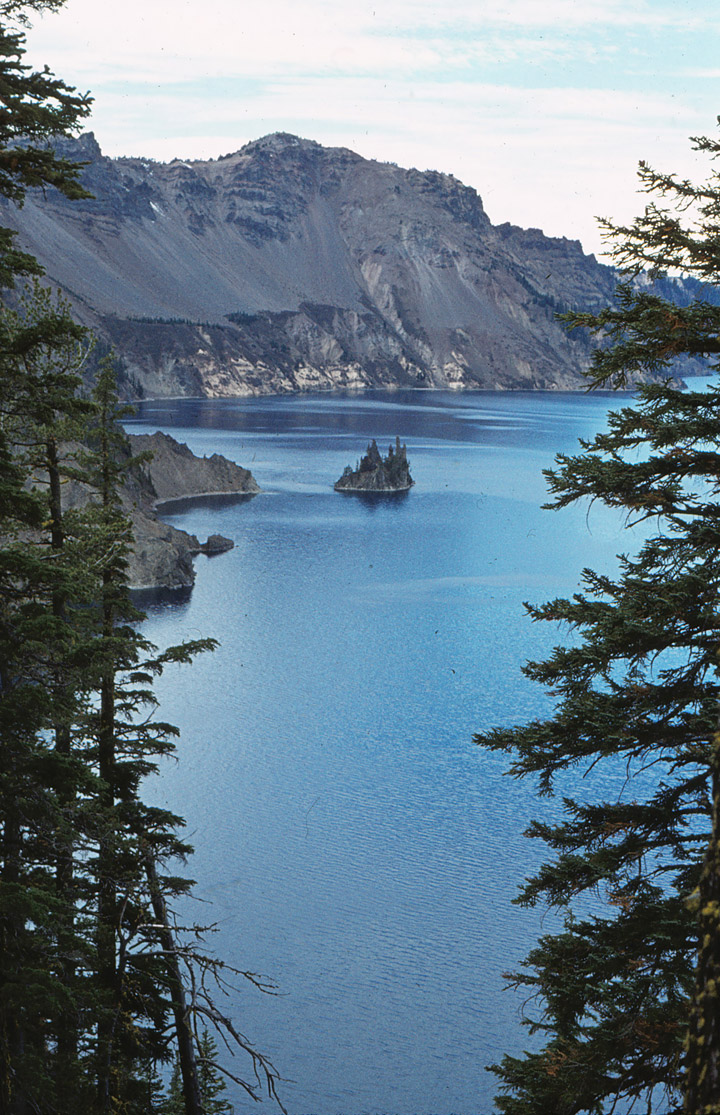 Some hydrothermal activity remains along the lake floor, suggesting that at sometime in the future Mazama may erupt once again