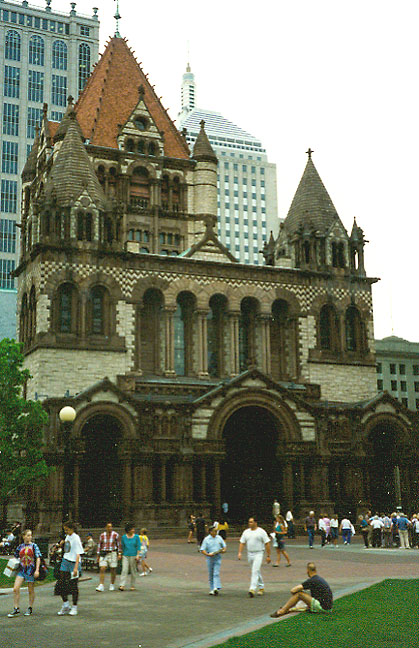 Boston, the capital city of the Commonwealth of Massachusetts and the seat of Suffolk County. It is located in the eastern part of the state on Boston Harbor, an inlet of Massachusetts Bay, at the mouth of the Charles River. Boston is the largest and most influential city in the six-state New England region. It was one of the earliest major U.S. cities to be settled by Europeans (1625) and the largest city in the British American colonies. The American Revolution (1775-1783) began in the Boston area. 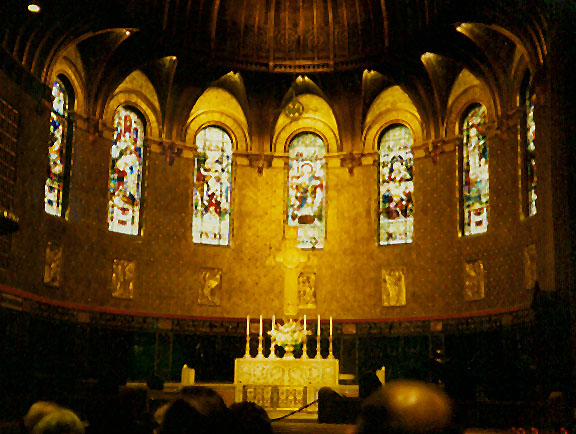 At the end of the 20th century, Boston was the focus of economic activity, communications, and transportation in New England and was one of the major centers of higher education in the United States. The city is scenically located along the waters of the Charles River and Boston Harbor. It has a compact, walkable city center, which is dotted with sites of historic interest dating to colonial times. 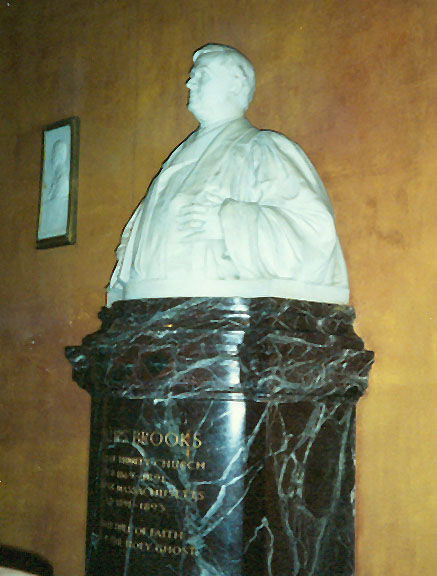 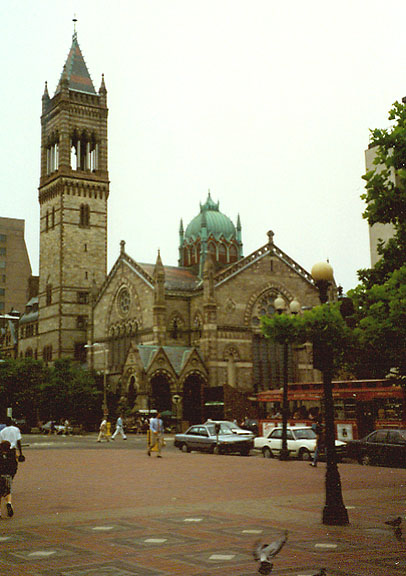 The heart of the modern city is the compact downtown area, which serves as the city's commercial and financial district. This area contains a number of historical landmarks, including the Old State House, Granary Burial Ground, and Old South Meeting House. Old South Meeting House is where American revolutionary leaders Samuel Adams, James Otis, and John Hancock conducted many of the protest meetings leading to the American Revolution (1775-1783). 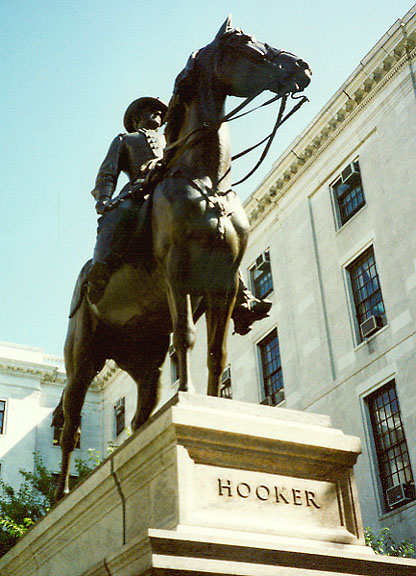 Hooker, Joseph (1814-1879), American army officer, whose skillful leadership and personal bravery won for him the nickname Fighting Joe. He was born in Hadley, Massachusetts, and educated at the U.S. Military Academy. During the Mexican War he was brevetted lieutenant colonel at Monterrey. With the outbreak of the American Civil War he was appointed brigadier general of volunteers, and in 1862 he became brigadier general in the Union army. 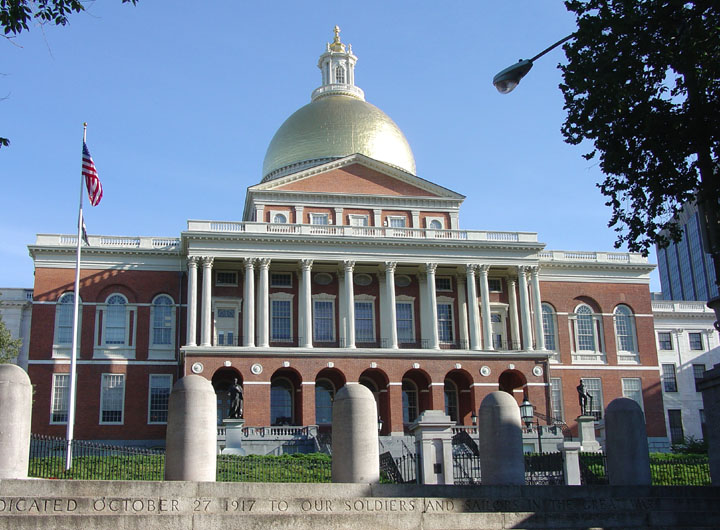 More Photos of the Freedom Trail

On the southern end of the district is Chinatown, with its concentration of Chinese restaurants and food stores. To the north is an area known as Government Center, developed in the 1960s. City Hall and the John F. Kennedy Federal Building are located there. Not far from Government Center are two Boston landmarks: Faneuil Hall, built in 1742 as a public market and a place for town meetings, and Quincy Market, a retail and wholesale distribution center for meat and produce that was renovated in 1976 to form a festive food market. 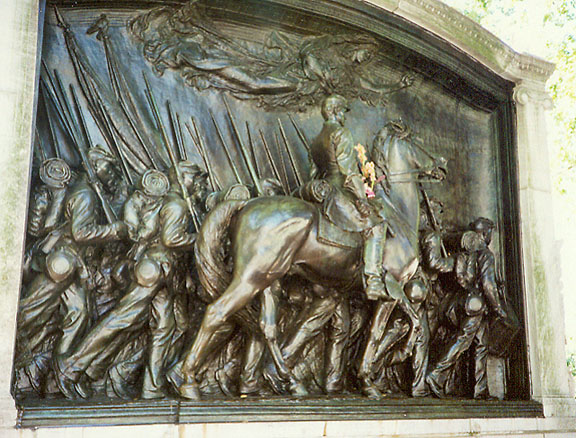 To the west of the downtown is Boston Common, an open area originally reserved by colonists for grazing cattle. The Common is the oldest public park in the United States. The State House, which serves as the state capitol building, stands at the north end of the Common. Built from 1795 to 1798 by U.S. architect Charles Bulfinch, the gold-domed statehouse dominates Beacon Hill, a neighborhood that has been the traditional home of wealthy Bostonians. 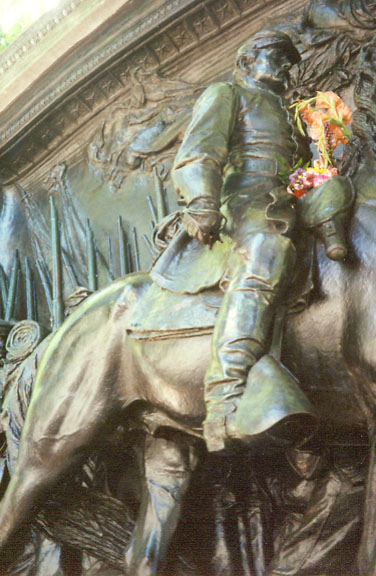 The neighborhood remains a prime address and contains many historical houses with handsome brick facades. Founded in 1807, Boston Athenaeum moved to its present building on Beacon Street in 1847. Privately operated and opened to members and their guests, the Athenaeum is one of the oldest libraries in the United States. It has notable historical collections on the American Civil War (1861-1865) and the works of 19th-century antislavery activists known as abolitionists, as well as other 19th-century materials and a rare book collection that includes 15th- and 16th-century materials. 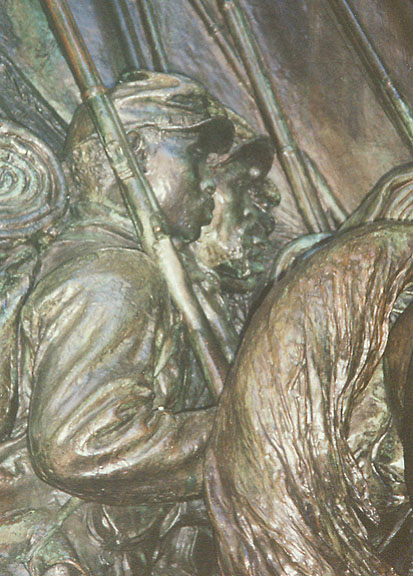 The West End, which borders Beacon Hill north of Cambridge Street, changed radically as a result of urban renewal projects. In the 1960s the city razed tenements in the area. The Charles River apartment complex now dominates the neighborhood. One survivor of the razing was Massachusetts General Hospital, incorporated in 1811 and one of the nation's leading medical institutions. 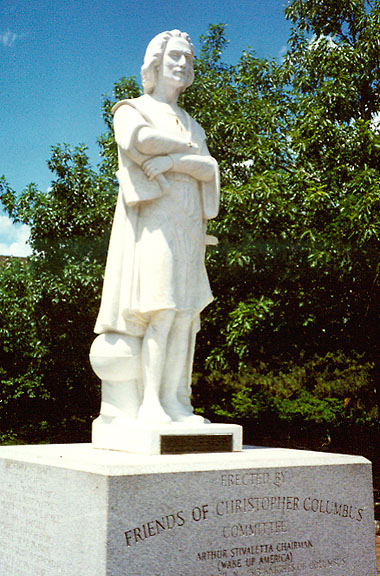 Northeast of the hospital, in an old commercial district, is the FleetCenter, a sports and music arena opened in 1995 to replace an aging facility, Boston Garden. The Boston Celtics of the National Basketball Association (NBA) and the Boston Bruins of the National Hockey League (NHL) play at the FleetCenter. The Museum of Science is located north of the hospital on the Charles River Dam. 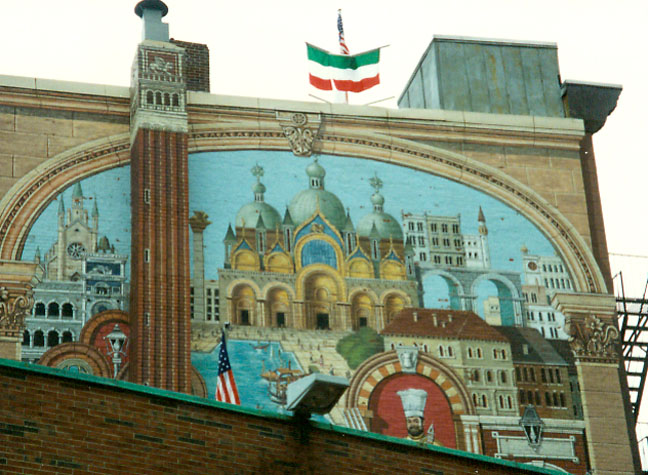 Northeast of the downtown is the North End, the site of historic buildings such as the house of American patriot Paul Revere, the Old North Church, and Copp's Hill Burying Ground. Paul Revere's House is the oldest surviving house in Boston. It is the place where he departed on his historic ride in 1775 to warn anti-British forces in Lexington and Concord of the approach of British troops sent to seize military supplies held by the colonists. Old North Church is the city's oldest church. 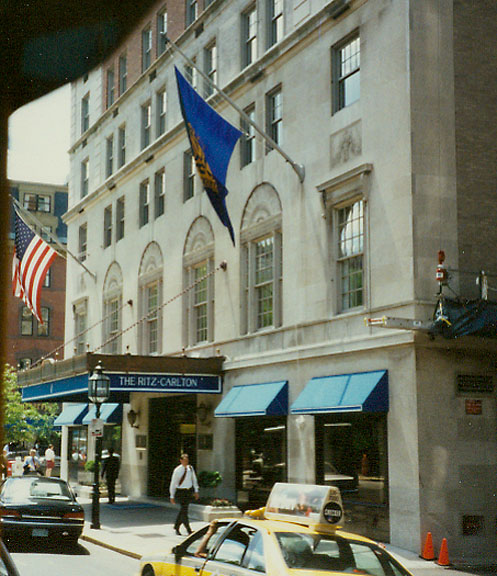 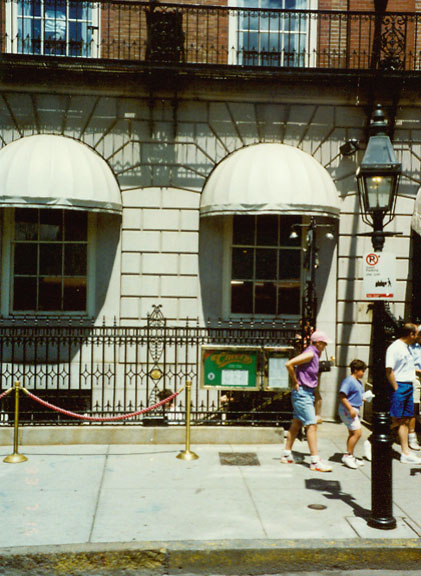 The North End is separated from the downtown by the Fitzgerald Expressway (Boston's main north-south traffic artery). Known as Boston's little Italy, the North End is a district of Italian restaurants, groceries, and three-story brick apartment buildings. During August, festivals and religious celebrations take place on the North End's narrow streets. 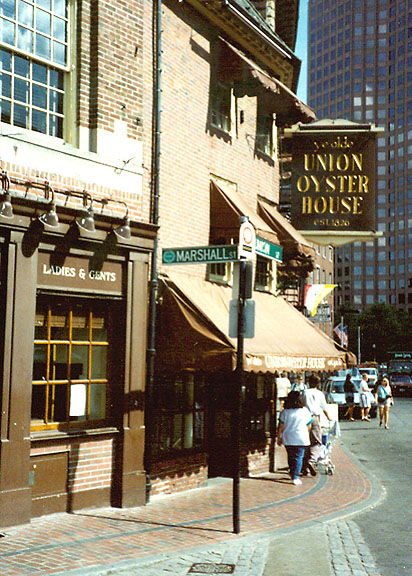 Water separates two of Boston's neighborhoods from the rest of the city. Across Boston's Inner Harbor, East Boston straddles Logan Airport. It is predominately an Italian neighborhood of one-, two-, and three-family homes. Charlestown, located across the Charles River, has long been a tightly knit, middle-class Irish community, although it began attracting professionals to its central area starting in the 1980s. 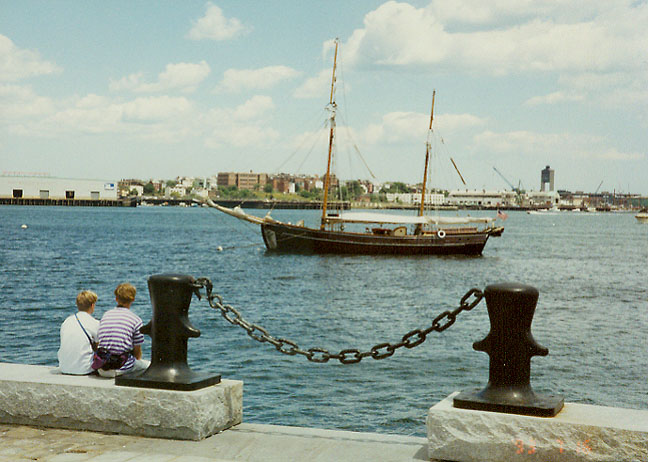 Bunker Hill Monument and Museum are found here as well as the Boston Navy Yard, a National Park Service Historic Site. It is the site of the USS Constitution, the oldest commissioned warship in the United States. 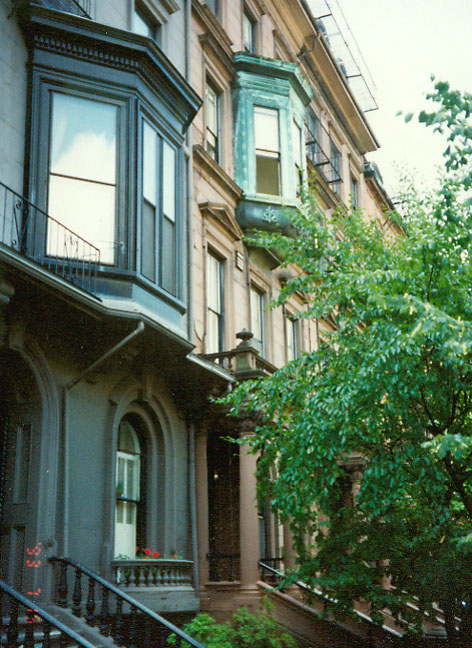 residential area of brownstone townhouses in Back Bay

The Back Bay was created by landfill in the late 1800s to the west of Beacon Hill and Boston Common. Today it is a residential area of brownstone townhouses laid out on a grid pattern of streets dominated by the wide east-west boulevard of Commonwealth Avenue. 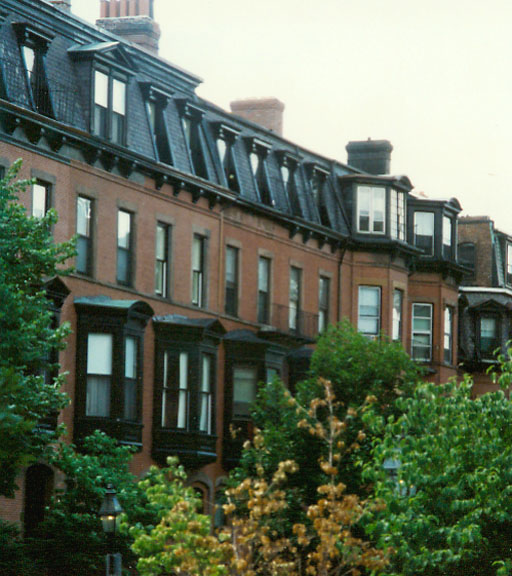 Mansard roofs on the brownstone townhouses 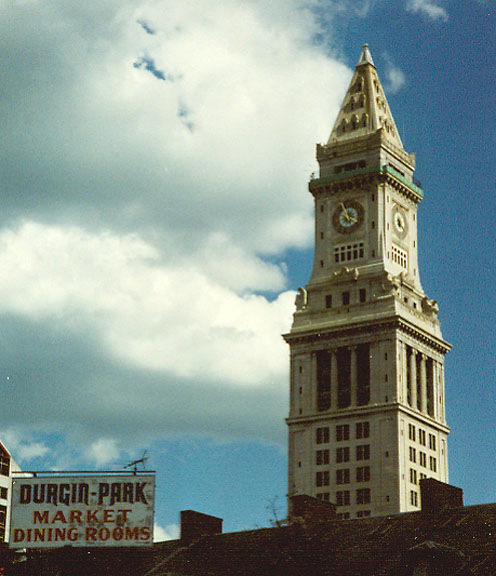 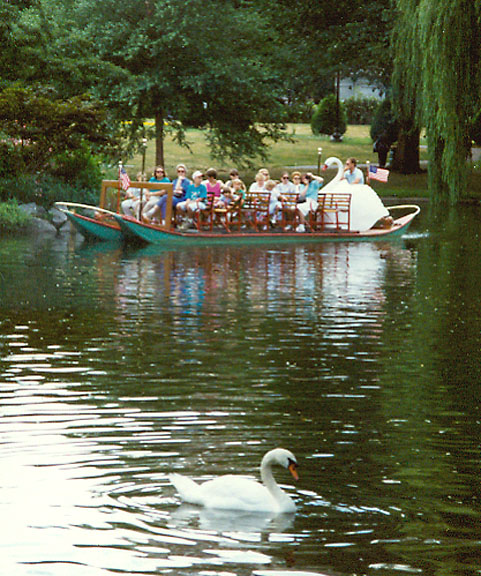 a Swan, and the famous Swan boats on a lake in Boston Common 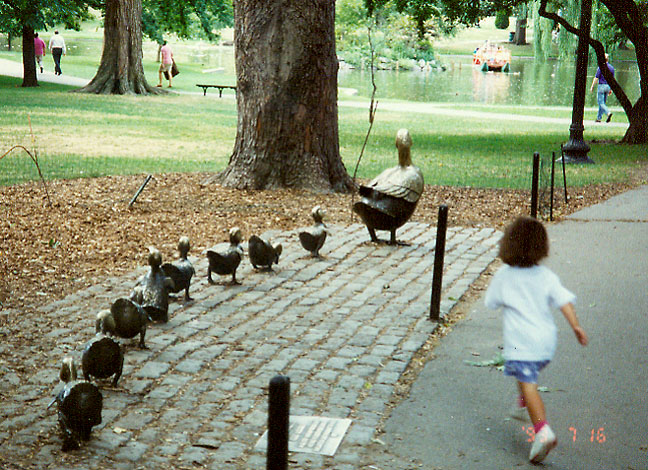 and the famous bronze Ducks in Boston Common