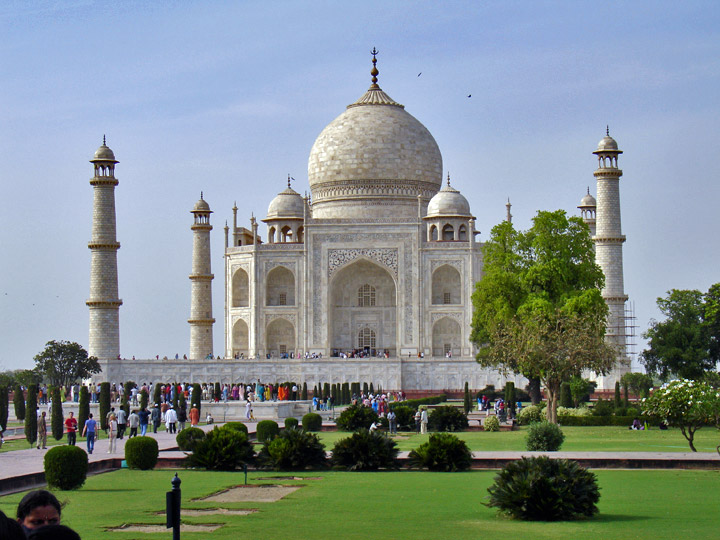 The reign of Shāh Jahān (1628–58) is  remarkable for its architectural achievements. 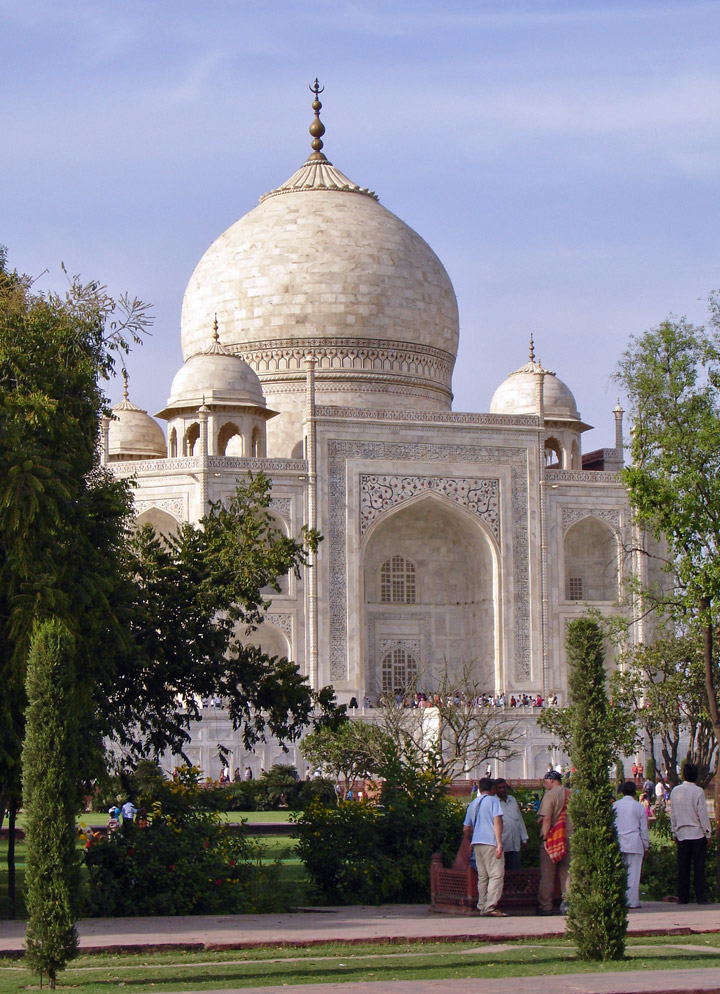 the Tāj Mahal (c. 1632–c. 1649), built as a tomb for Queen Mumtāz Mahal, is the greatest masterpiece of his reign. All the resources of the empire were put into its construction. 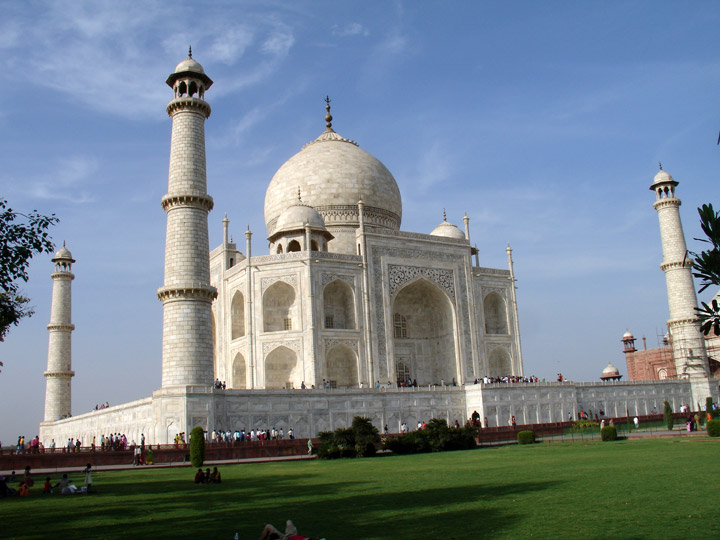 In addition to the mausoleum proper, the complex included a wide variety of accessory buildings of great beauty. The marble mausoleum rises up from a tall terrace (at the four corners of which are elegant towers, or minārs) and is crowned by a graceful dome. 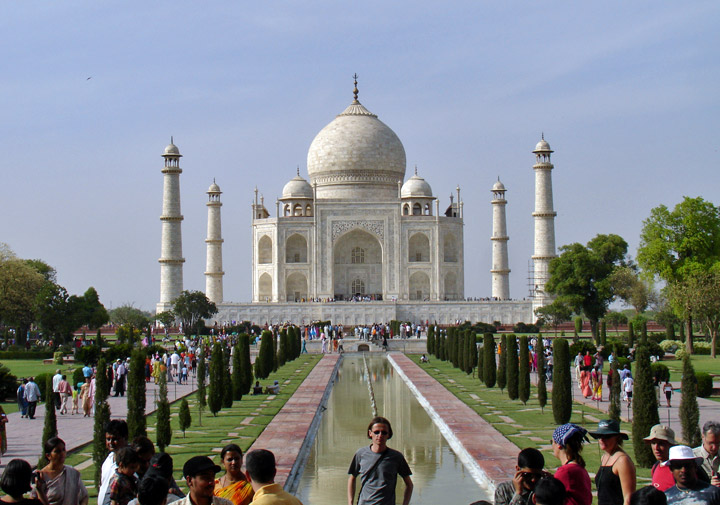 Mughal architecture reached its zenith during the reign of emperor Shāh Jahān (1628–58), its crowning achievement being the magnificent Tāj Mahal. This period is marked by a fresh emergence in India of Persian features that had been seen earlier in the tomb of Humāyūn. The use of the double dome, a recessed archway inside a rectangular fronton, and park like surroundings are all typical of Shāh Jahān period buildings. Symmetry and balance between the parts of a building were always stressed, while the delicacy of detail in Shāh Jahān decorative work has seldom been surpassed. White marble was a favored building material. 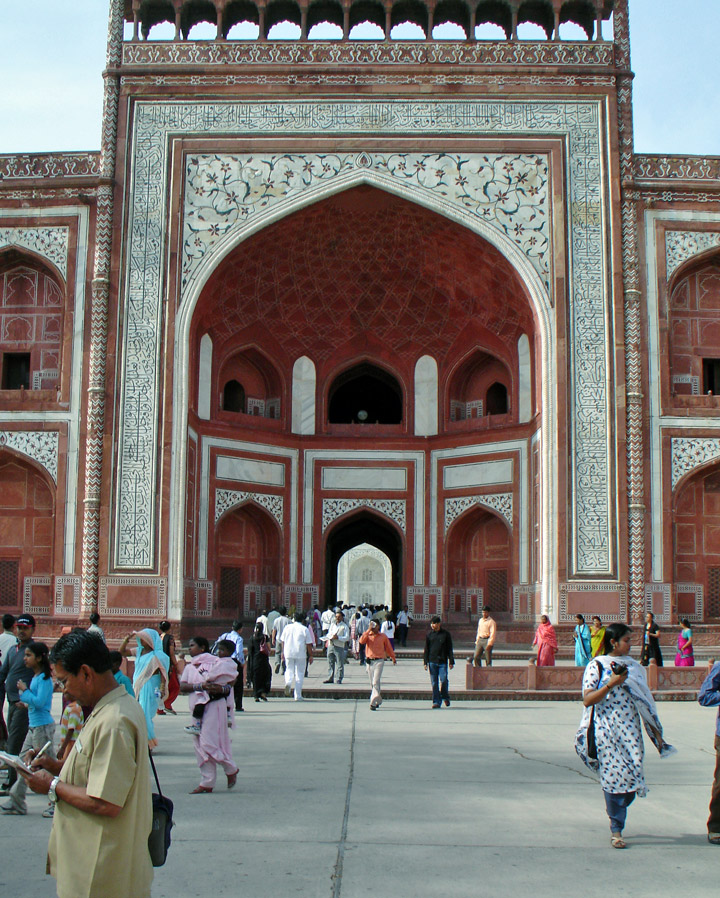 The architectural monuments of Shāh Jahān's successor, Aurangzeb (reigned 1658–1707), represent a distinct decline, though some notable mosques were built before the beginning of the 18th century. Subsequent works lost the balance and coherence characteristic of mature Mughal architecture. 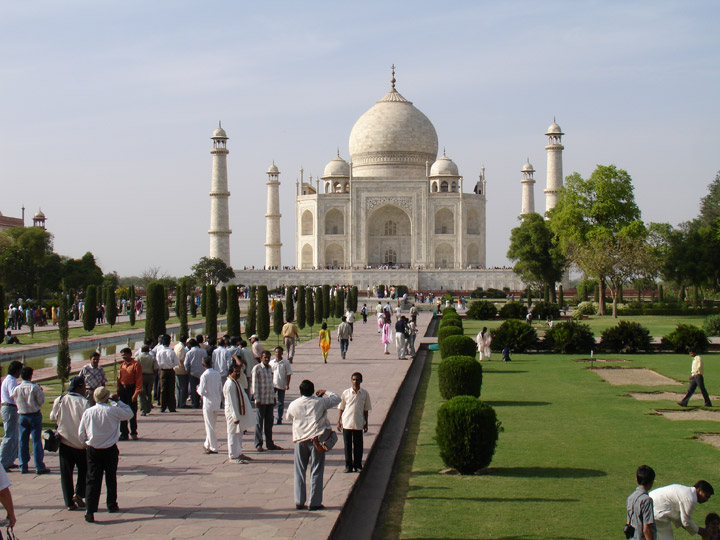 The Taj Mahal is distinguished as the finest example of Mughal architecture, a blending of Indian, Persian, and Islamic styles. One of the most beautiful structural compositions in the world, the Taj was designated a UNESCO World Heritage site in 1983. 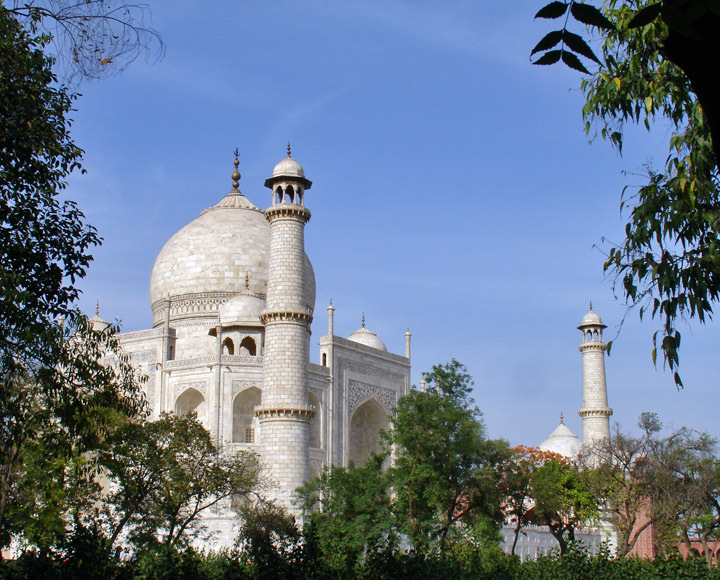 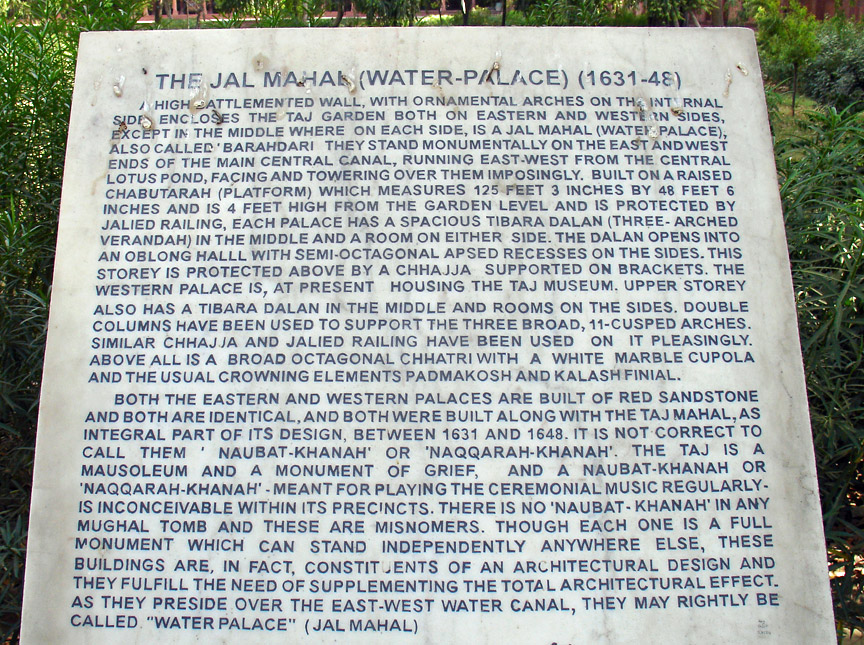 It was built by the Mughal emperor Shah Jahan (reigned 1628–58) to immortalize his favorite wife, Mumtaz Mahal (“Chosen One of the Palace”). She died in childbirth in 1631, after having been the emperor's inseparable companion since their marriage in 1612. The name Taj Mahal is a corruption of her title. The plans for the complex have been attributed to various architects of the period, although the chief architect was probably Ustad Ahmad Lahawri, an Indian of Persian descent. The five principal elements of the complex—main gateway, garden, mosque, jawab (literally “answer”; a building mirroring the mosque), and mausoleum (including its four minarets)—were conceived and designed as a unified entity according to the tenets of Mughal building practice, which allowed no subsequent addition or alteration. Building commenced about 1632. More than 20,000 workers were employed from India, Persia, the Ottoman Empire, and Europe to complete the mausoleum itself by about 1638–39; the adjunct buildings were finished by 1643, and decoration work continued until at least 1647. Construction of the 42-acre (17-hectare) complex spanned 22 years at a cost between four and five million rupees. 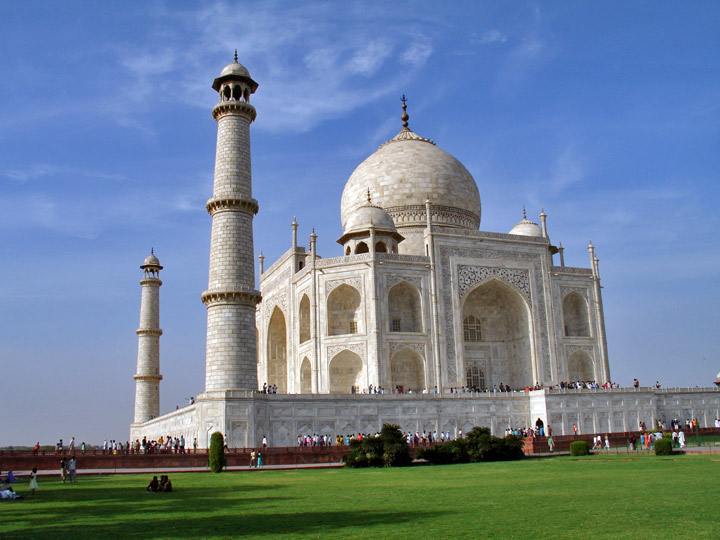 Resting in the middle of a wide plinth 23 feet (7 meters) high, the mausoleum proper is of white marble that reflects various hues according to the intensity of sunlight or moonlight. It has four nearly identical facades, each with a wide central arch rising to 108 feet (33 meters) and chamfered (slanted) corners incorporating smaller arches. The majestic central dome, which reaches a height of 240 feet (73 meters) at the tip of its finial, is surrounded by four lesser domes. The acoustics inside the main dome cause the single note of a flute to reverberate five times. The interior of the mausoleum is organized around an octagonal marble chamber ornamented with low-relief carvings and pietra dura; therein are the cenotaphs of Mumtaz Muhal and Shah Jahan. These false tombs are enclosed by a finely wrought filigree marble screen. Beneath the tombs, at garden level, lie the true sarcophagi. Standing gracefully apart from the central building, at each of the four corners of the square plinth, are elegant minarets. 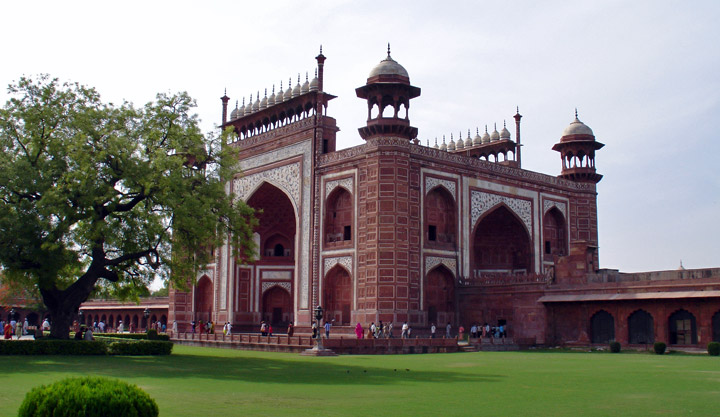 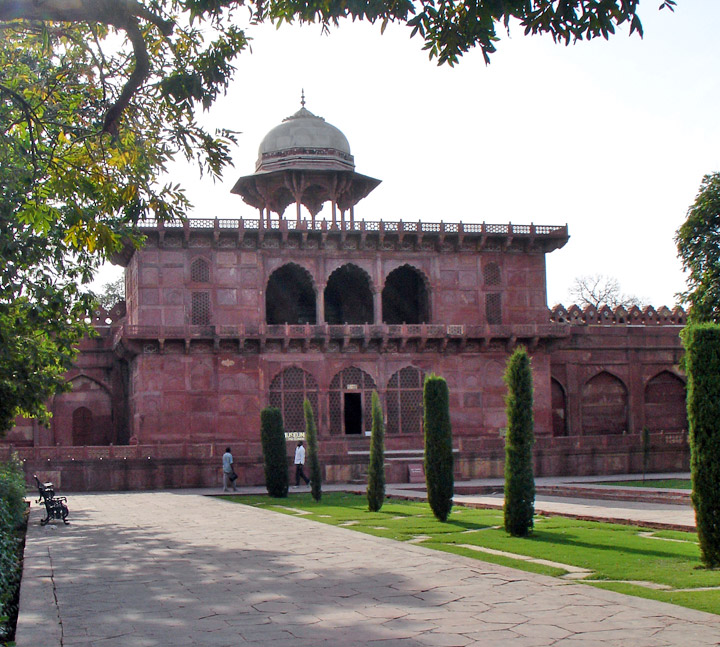 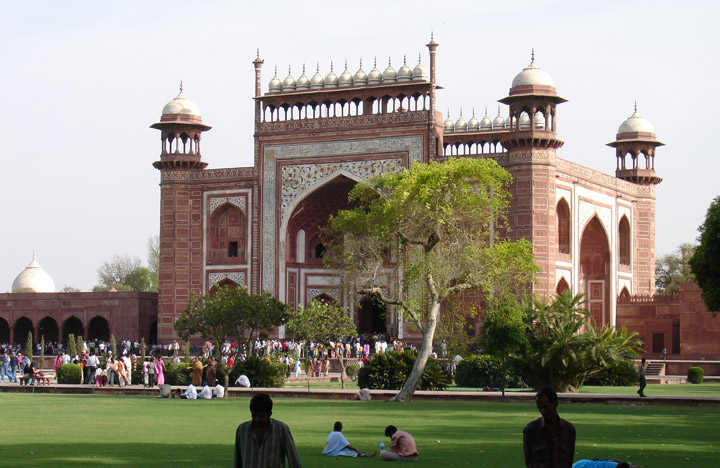 Flanking the mausoleum near the northwestern and northeastern edges of the garden, respectively, are two symmetrically identical buildings—the mosque, which faces east, and its jawab, which faces west and provides aesthetic balance. Built of red Sikri sandstone with marble-necked domes and architraves, they contrast in both colour and texture with the mausoleum's white marble. 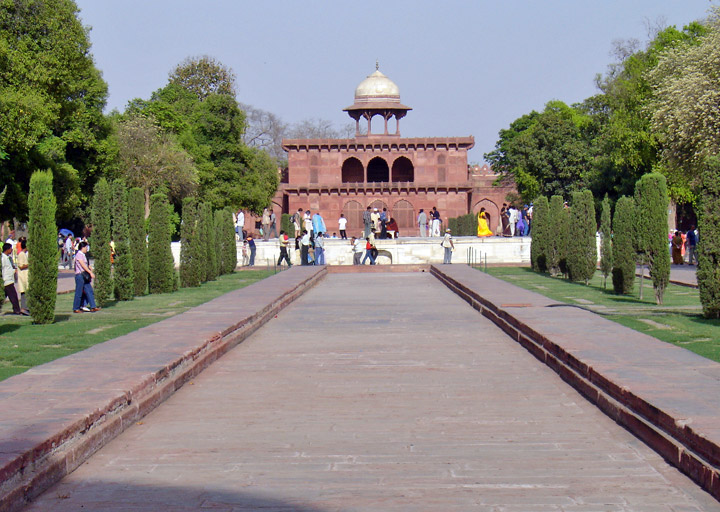 The garden is set out along classical Mughal lines—a square quartered by long watercourses (pools)—with walking paths, fountains, and ornamental trees. Enclosed by the walls and structures of the complex, it provides a striking approach to the mausoleum, which can be seen reflected in the garden's central pools. 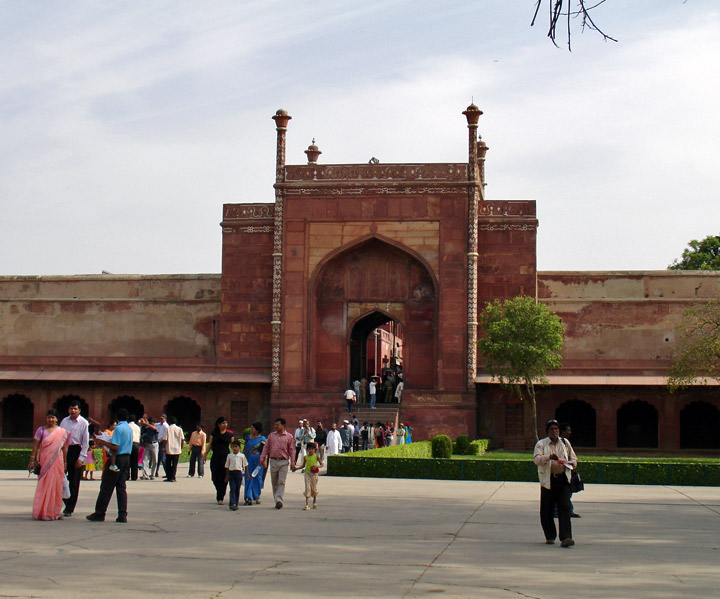 The southern end of the complex is graced by a wide red sandstone gateway with a recessed central arch two stories high. White marble paneling around the arch is inlaid with black Qurānic lettering and floral designs. The main arch is flanked by two pairs of smaller arches. Crowning the northern and southern facades of the gateway are matching rows of white cupola-like chattris (chhattris), 11 to each facade, accompanied by thin ornamental minarets that rise to some 98 feet (30 metres). At the four corners of the structure are octagonal towers capped with larger chattris.

Two notable decorative features are repeated throughout the complex: pietra dura and Arabic calligraphy. As embodied in the Mughal craft, pietra dura incorporates the inlay of semiprecious stones of various colours, such as lapis lazuli, jade, crystal, turquoise, and amethyst, in highly formalized and intertwining geometric and floral designs. The colors serve to moderate the dazzling expanse of the white Makrana marble. Under the direction of Amanat Khan al-Shirazi, Qurānic verses were inscribed across numerous sections of the Taj Mahal in calligraphy, the centre of Islamic artistic tradition. One of the inscriptions in the sandstone gateway is known as Daybreak and invites the faithful to enter paradise. Calligraphy also encircles the soaring arched entrances to the mausoleum proper. To ensure its uniform appearance from the vantage point of the terrace, the lettering increases in size according to its relative height and distance from the viewer.

More Photos of the Detail

A tradition relates that Shah Jahan had originally intended to build another mausoleum across the river to house his own remains, the two structures to be connected by a bridge. He was deposed by his son Aurangzeb, however, and imprisoned for the rest of his life in Agra Fort, on the right bank of the Yamuna River 1 mile (1.6 km) west of the Taj Mahal.

More Photo from across the Yamuna river 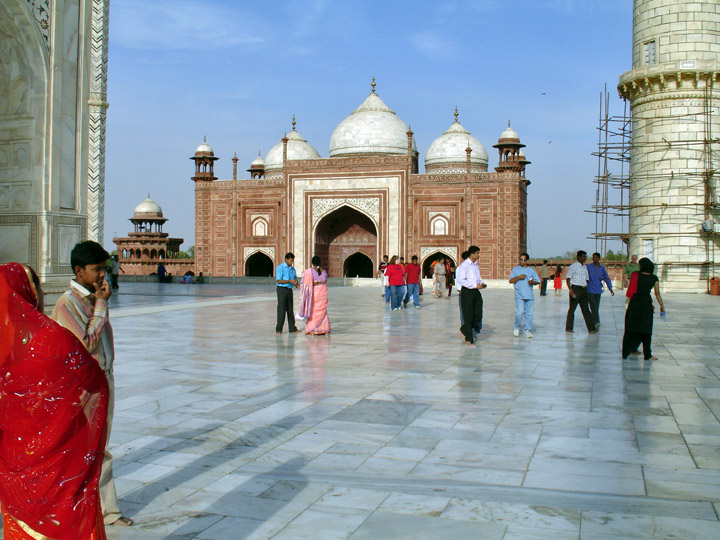 Over the centuries the Taj Mahal has been subject to neglect and decay. A major restoration was carried out at the beginning of the 20th century under the direction of Lord Curzon, then the British viceroy of India. More recently, air pollution caused by emissions from foundries and other nearby factories and exhaust from motor vehicles has damaged the mausoleum, notably its marble facade. A number of steps have been taken to reduce the threat to the monument, among them the closing of some foundries and the installation of pollution-control equipment at others, the creation of a parkland buffer zone around the complex, and the banning of nearby vehicular traffic. A restoration and research program for the Taj Mahal was initiated in 1998. Progress in improving environmental conditions around the monument, however, has been slow. 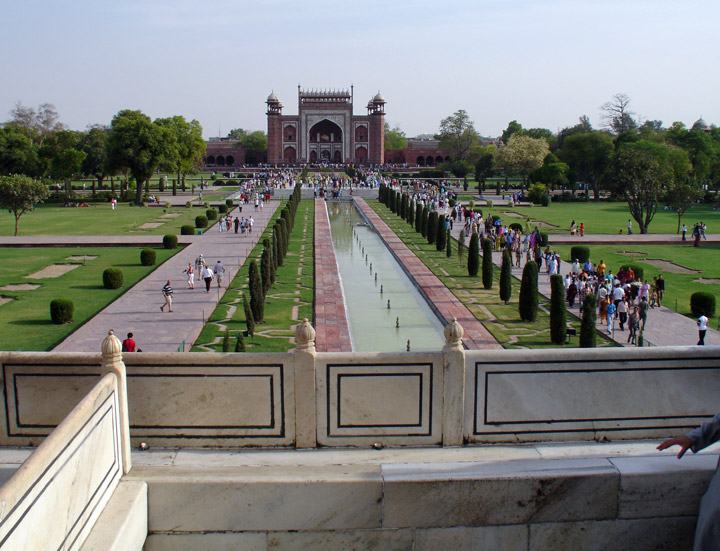 Photos of the Indian people visiting the Taj Magal

The Taj Mahal has come increasingly to be seen as an Indian cultural symbol. Some Hindu nationalist groups have attempted to diminish the importance of the Muslim influence in accounting for the origins and design of the Taj Mahal. 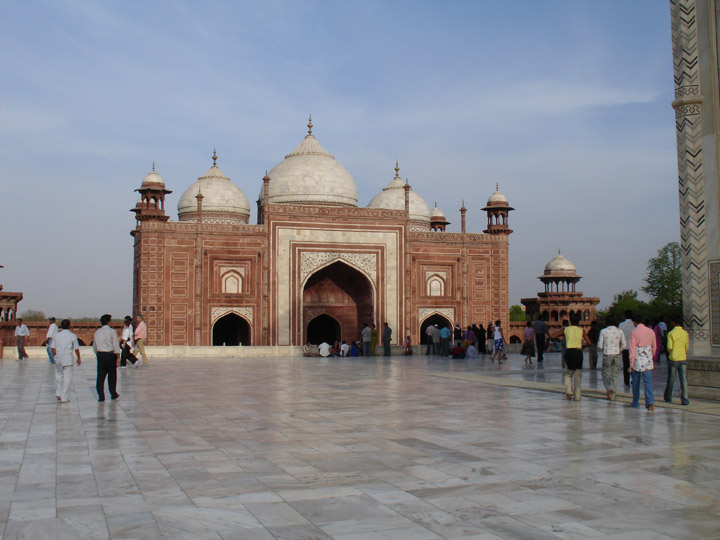 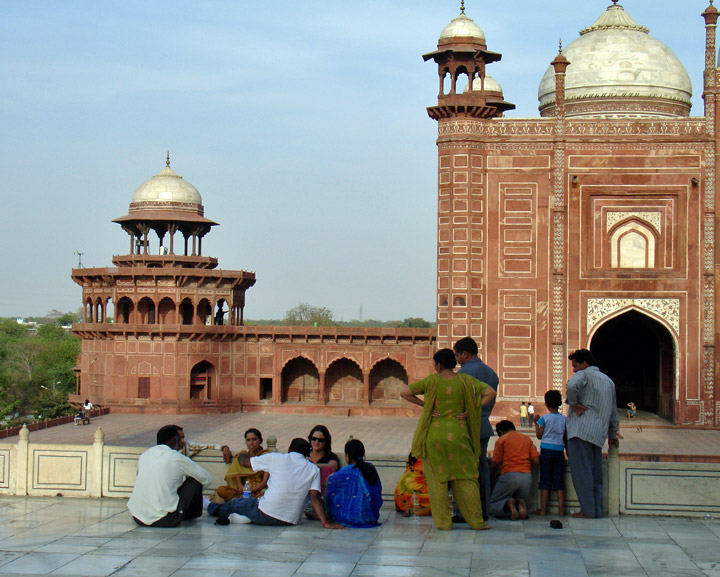 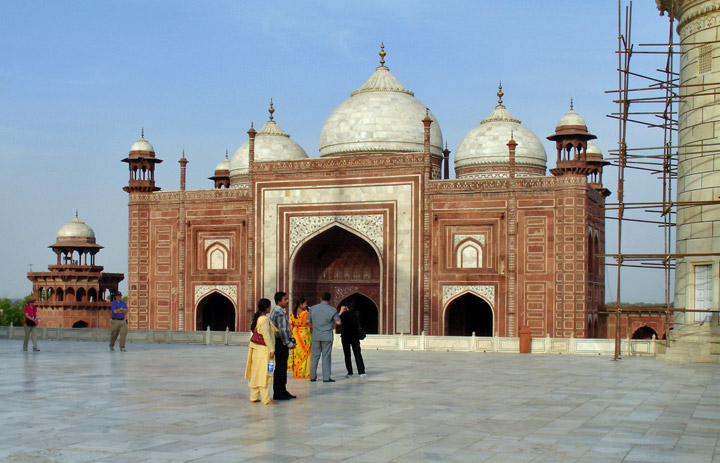 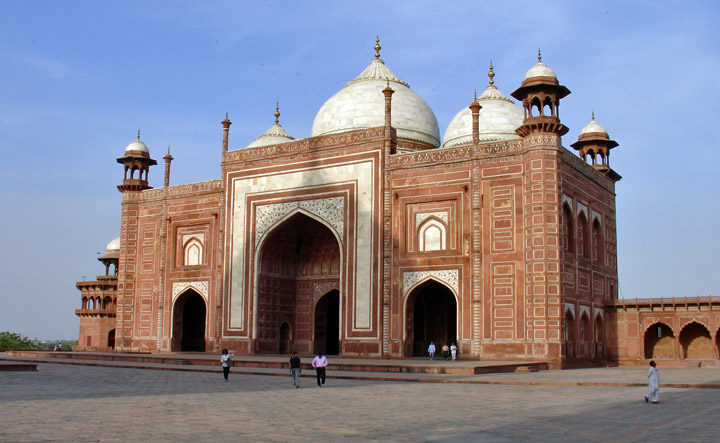 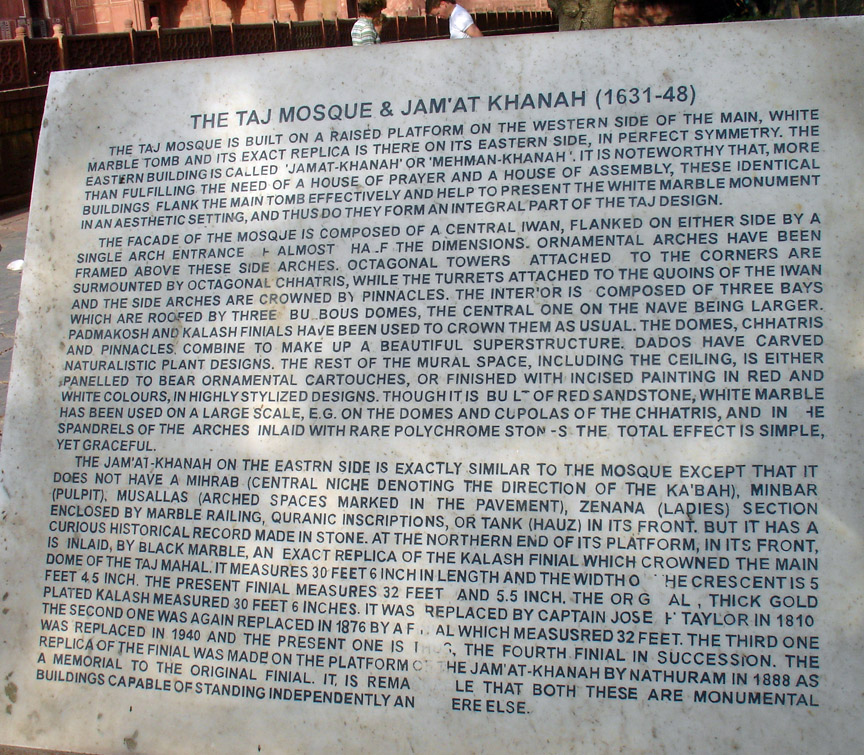 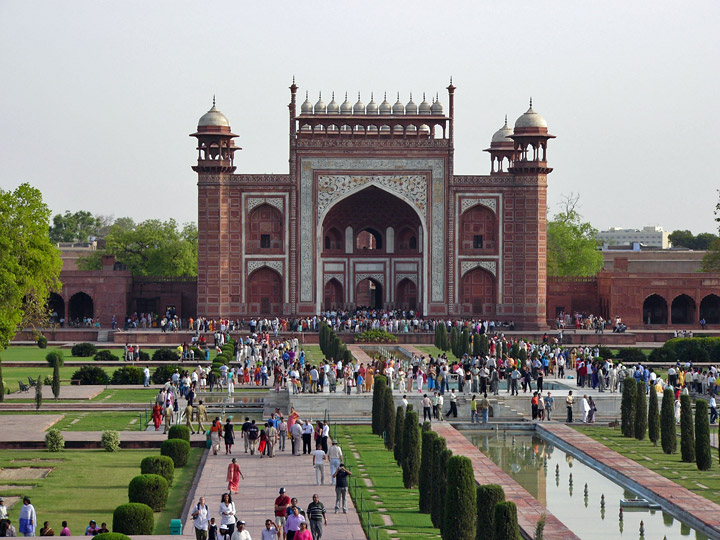 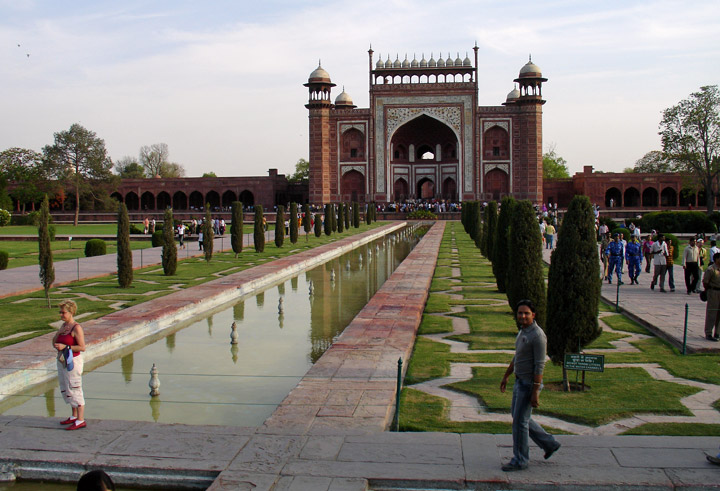 people streaming to the exit 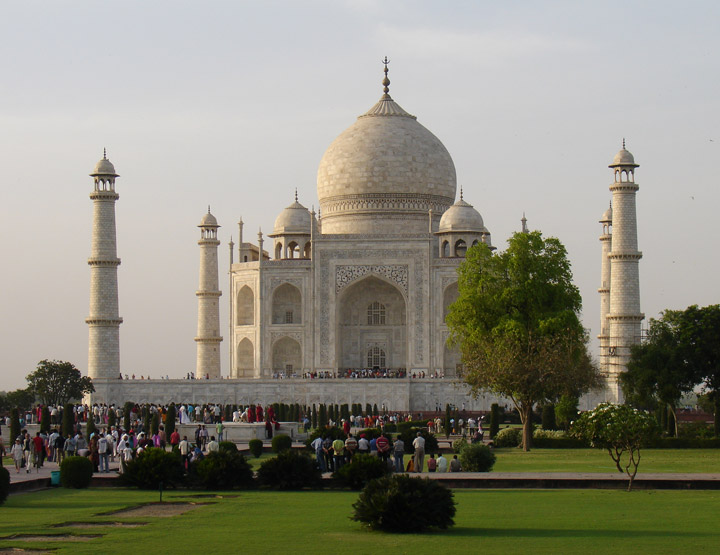