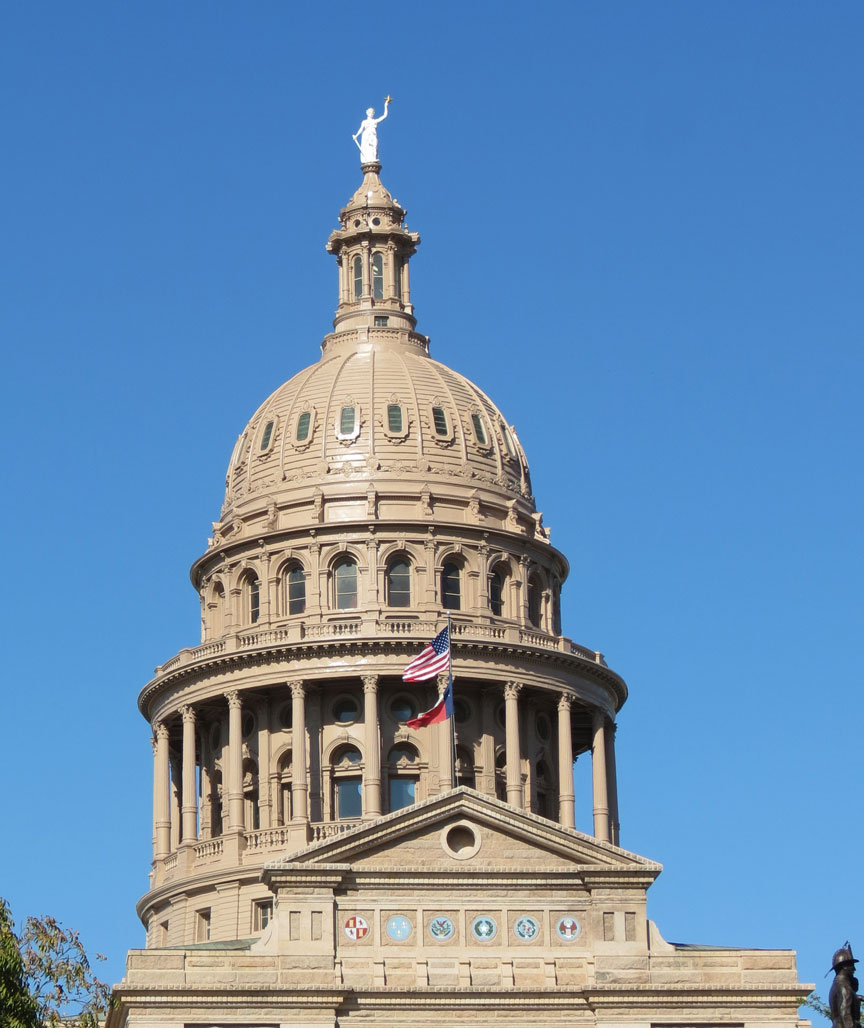 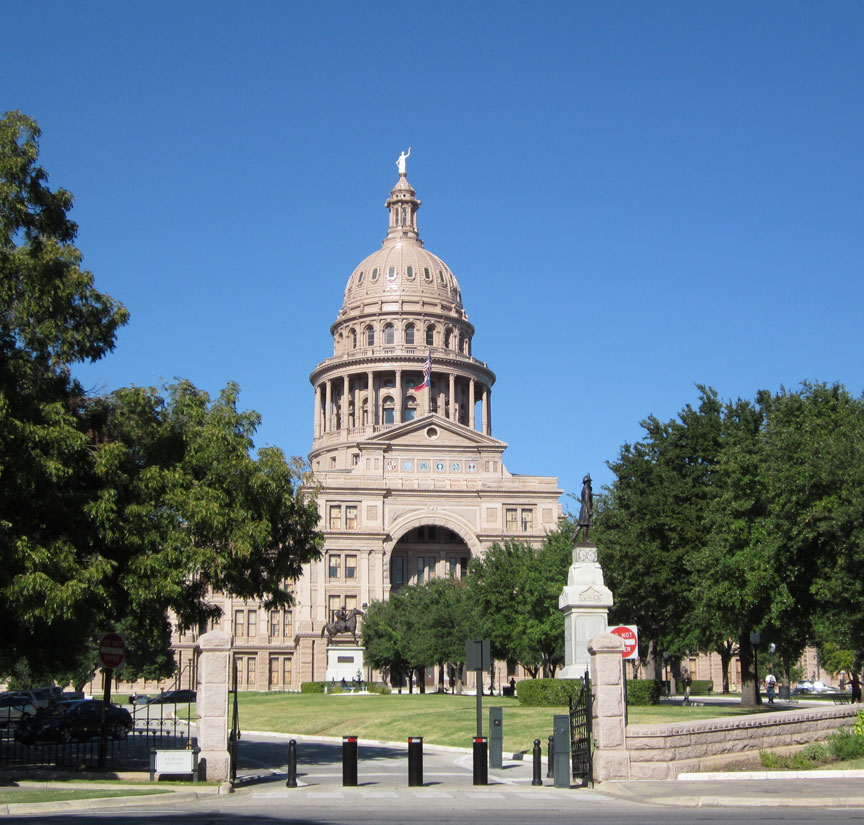 The Texas State Capitol is located in Austin, Texas, and is the fourth building to be the house of Texas state government in Austin. It houses the chambers of the Texas Legislature and the office of the governor of Texas. It was originally designed in 1881 by architect Elijah E. Myers, and was constructed from 1882 to 1888 under the direction of civil engineer Reuben Lindsay Walker. A $75 million underground extension was completed in 1993. The building was added to the National Register of Historic Places in 1970 and recognized as a National Historic Landmark in 1986. The Texas State Capitol building is 308 ft (94 m) tall. 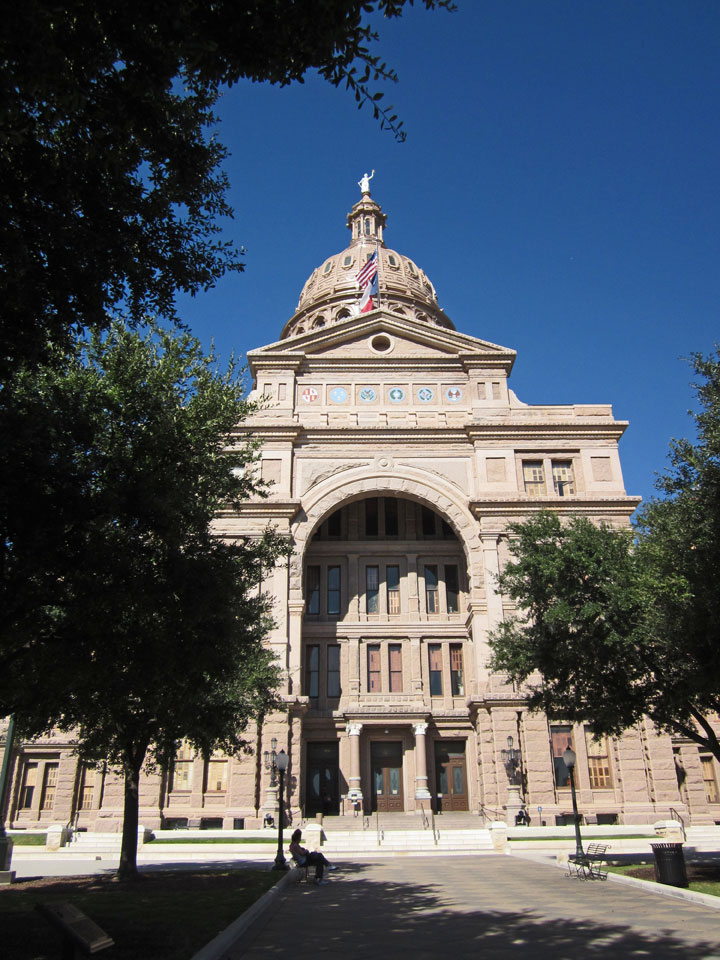 Construction of the Italian Renaissance Revival style capitol was funded by an article of the state constitution, adopted February 15, 1876, which authorized the sale of public lands for the purpose. In one of the largest barter transactions of recorded history, the builders of the capitol were paid with over three-million acres (12,000 km²) of public land in the "Panhandle" region of Texas; this tract later became the largest cattle ranch in the world, the XIT Ranch. The value of the land, combined with expenses, added to a total cost of $3.7 million for the original building. It was constructed largely by convicts or migrant workers, as many as a thousand at a time. The building has been renovated several times, with central air conditioning installed in 1955 and the most recent refurbishments completed in 1997. 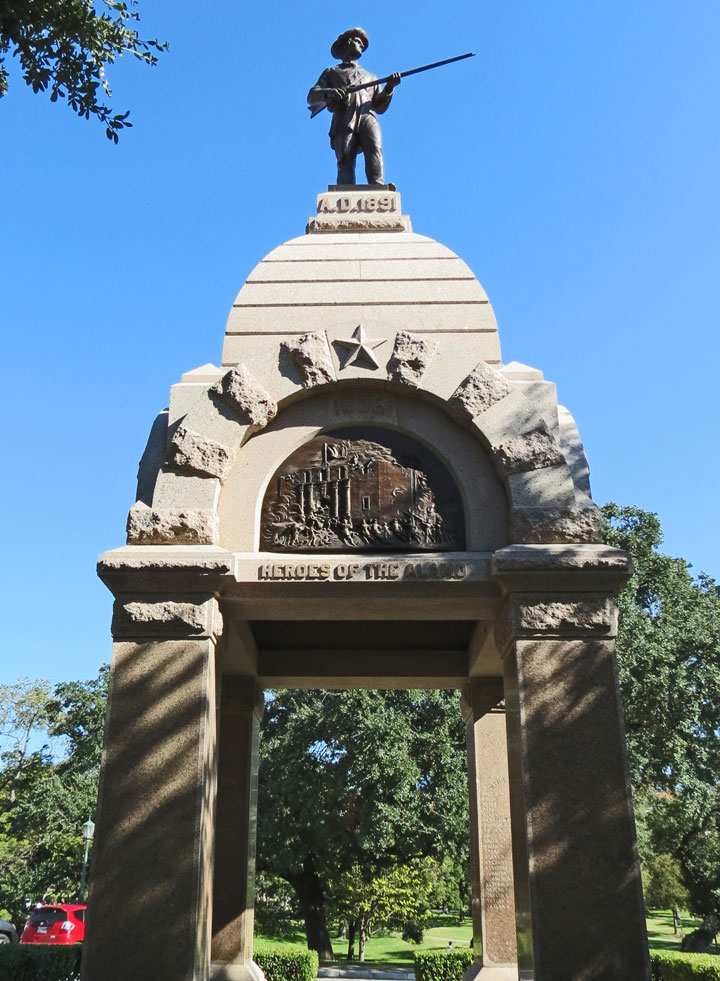 Heroes of the Alamo Monument

The cornerstone for the building was laid on March 2, 1885, Texas Independence Day, and the completed building was opened to the public on April 21, 1888, San Jacinto Day. The building was originally planned to be constructed entirely of limestone from Oatmanville (present-day Oak Hill), about ten miles (16 km) to the southwest. However, the limestone was found to have a high iron content after it began to discolor. Learning of the problem, the owners of Granite Mountain near Marble Falls offered to donate to the state, free of charge, the necessary amount of pink granite as an alternative. While the building is mostly built of the Oak Hill limestone, most of it is hidden behind the walls and on the foundations. Pink granite was subsequently used for many state government buildings in the Austin area. 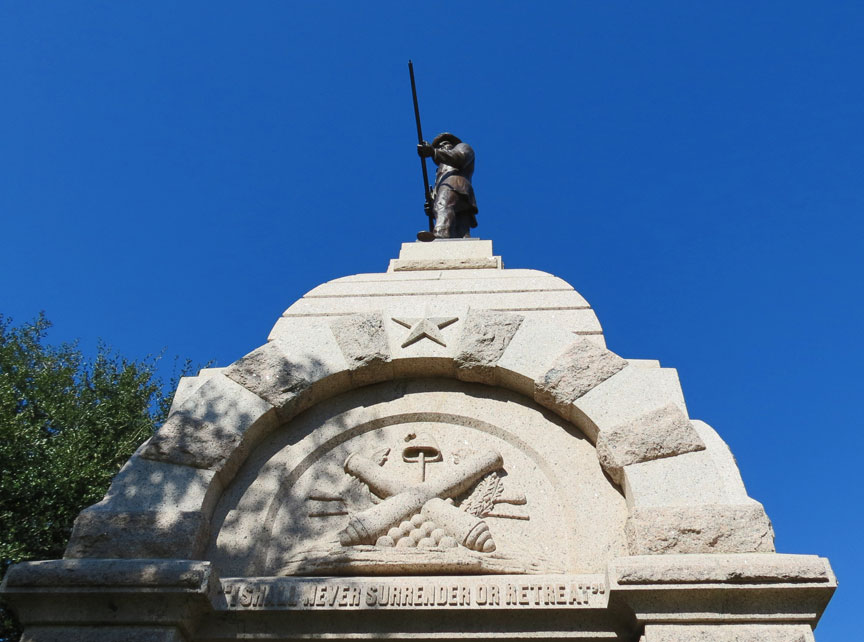 On February 6, 1983 a fire began in the Lieutenant Governor's apartment in the building. A guest of the Lieutenant Governor was killed, and four firemen and a policeman were injured by the subsequent blaze. The capitol was crowded with accumulated archives, and the fire was intense and came dangerously close to destroying the structure. It caused severe damage to the east wing and compromised much of the framing, which was largely composed of exposed cast iron posts and beams. Restoration continued until 1993, however as the state took advantage of the extensive rebuilding to update the mechanical and structural systems to modern standards. Additionally, the state sought to address the growing lack of space in the old building, deciding that a new office wing should be added. The logical place for an addition was the plaza directly to the north. However, a large building there would have eliminated the historic north façade and covered what had been traditionally been seen as an important public space 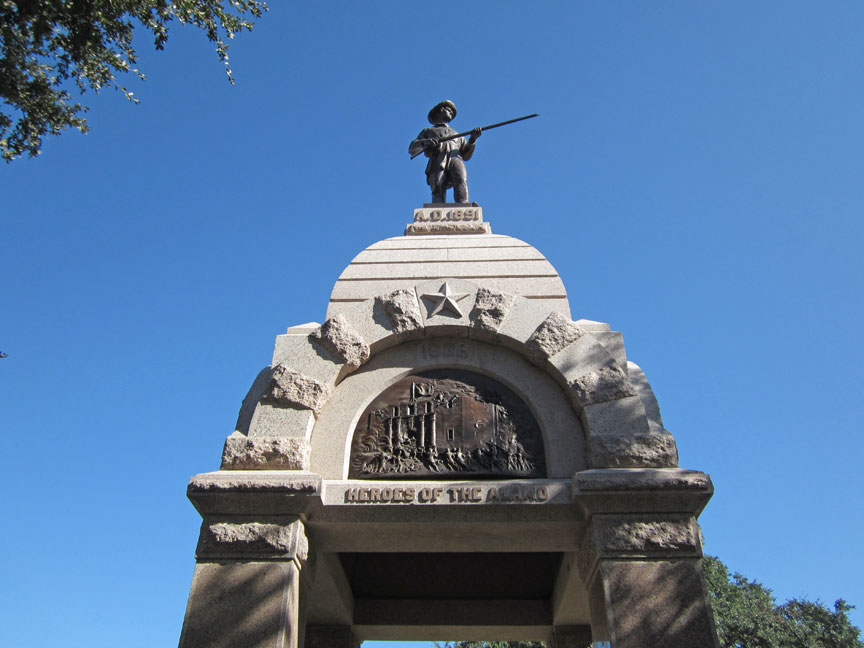 In 1993, the $75 million underground Capitol Extension was completed to the north, doubling the square footage available to Capitol occupants and providing much improved functionality. In 1995, a comprehensive interior and exterior restoration of the original building was completed at a cost of approximately $98 million. Finally, in 1997, the park-like grounds surrounding the Capitol were given $8 million renovation and restoration.

Subsequently, to preserve the facade and historic plaza, the new Capitol Extension was built as a four-story underground structure, completed in 1993. Though the extension encompasses 667,000 square feet (62,000 m2), nearly twice the floor space of the original building, there is little evidence of such a large structure at ground level, except for extensive skylights camouflaged as planter rows. 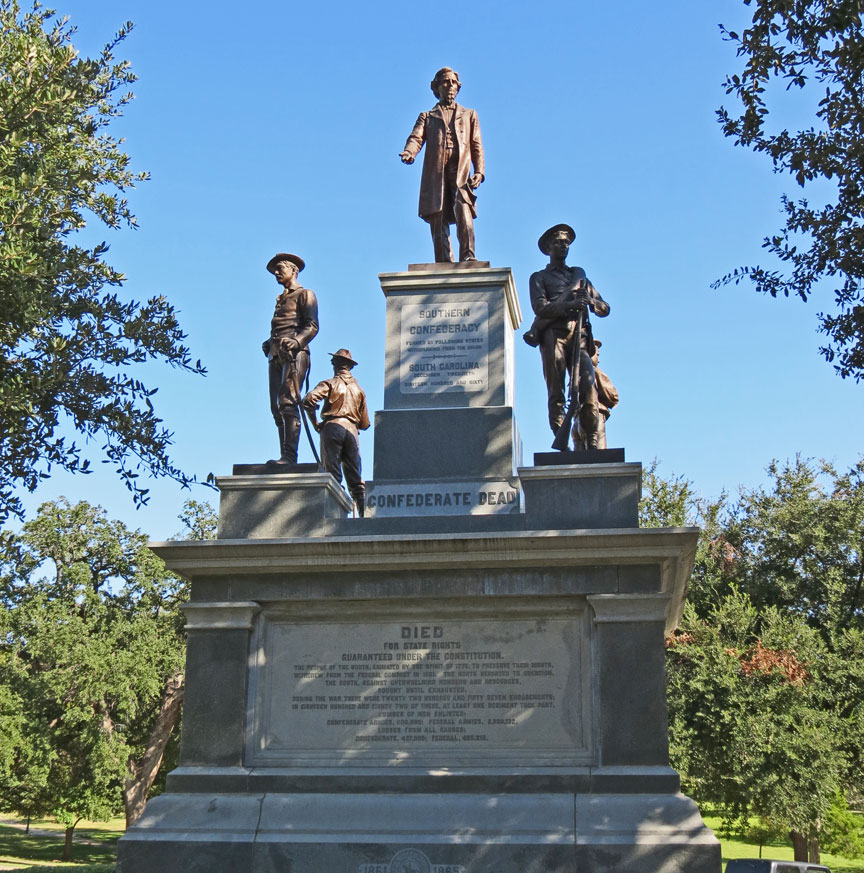 The capitol rotunda features portraits of every person who has served as president of the Republic of Texas or governor of the State of Texas. The south foyer features a large portrait of David Crockett, a painting depicting the surrender of General Santa Anna at the Battle of San Jacinto, and sculptures of Sam Houston and Stephen F. Austin made by Elisabeth Ney. The rotunda is also a whispering gallery. The capitol has 360,000 square feet (33,000 square meters) of floor space, more than any other state capitol building, and is on 2.25 acres (.9 hectares) of land. The building has nearly four hundred rooms and more than nine hundred windows. 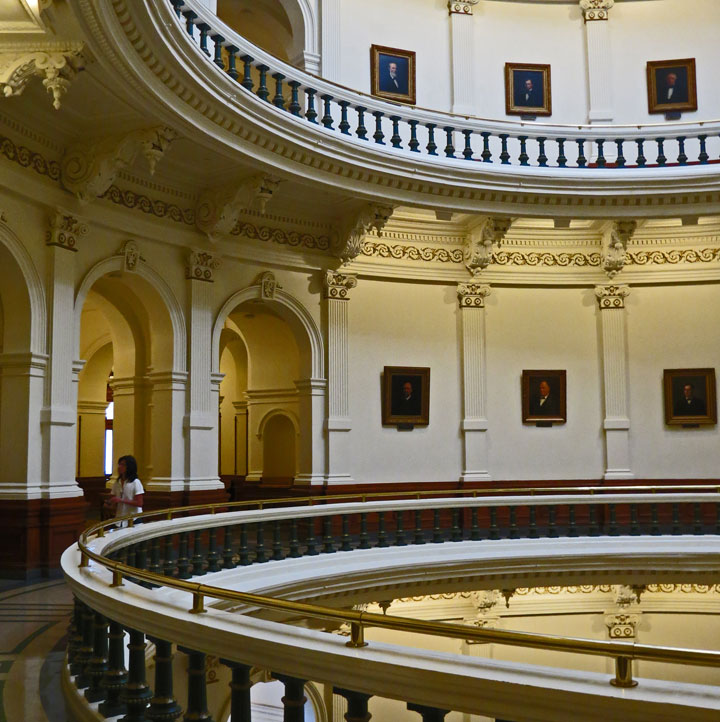 More Photos of the Rotunda 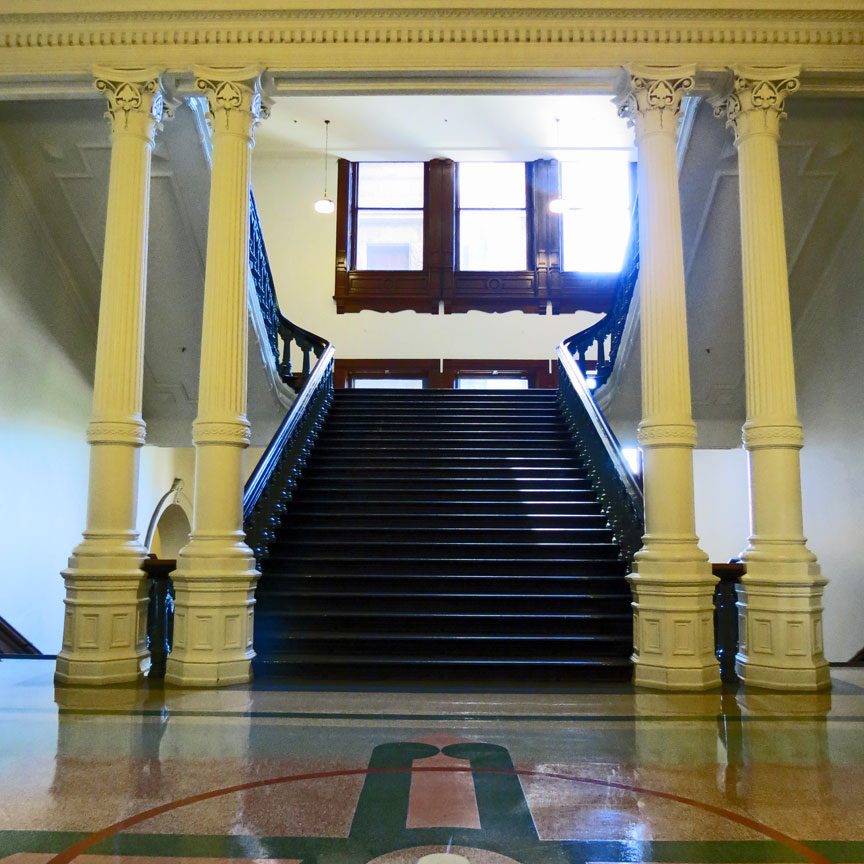 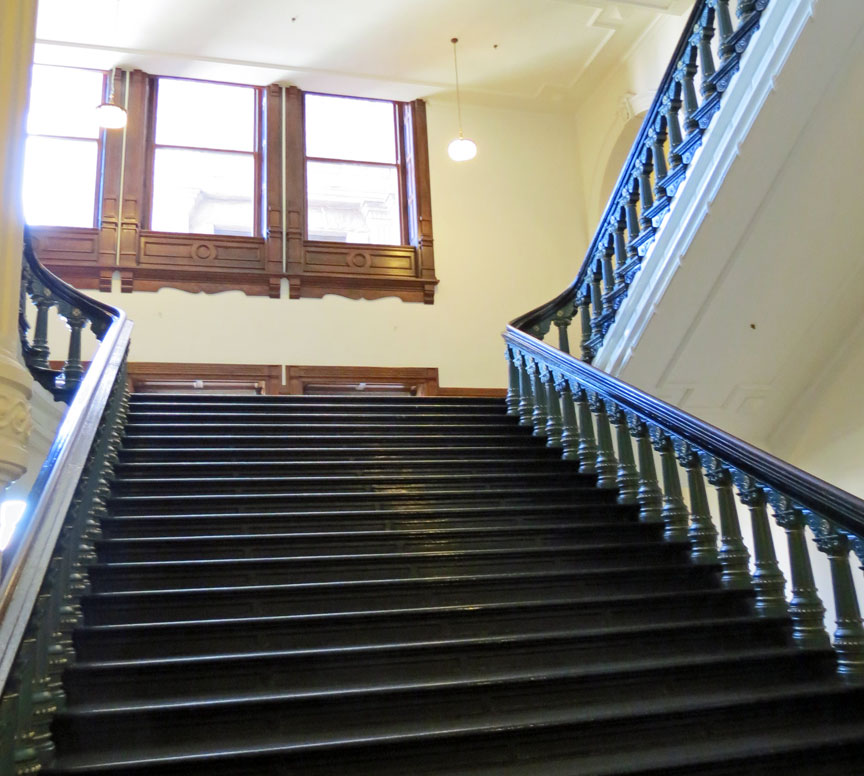 The Texas State Capitol was ranked ninety-second in the "America's Favorite Architecture" poll commissioned by the American Institute of Architects, that ranked the top hundred-and-fifty favorite architectural projects in America as of 2007. In a 2008 poll by the AIA, it was also ranked the number-one state capitol. 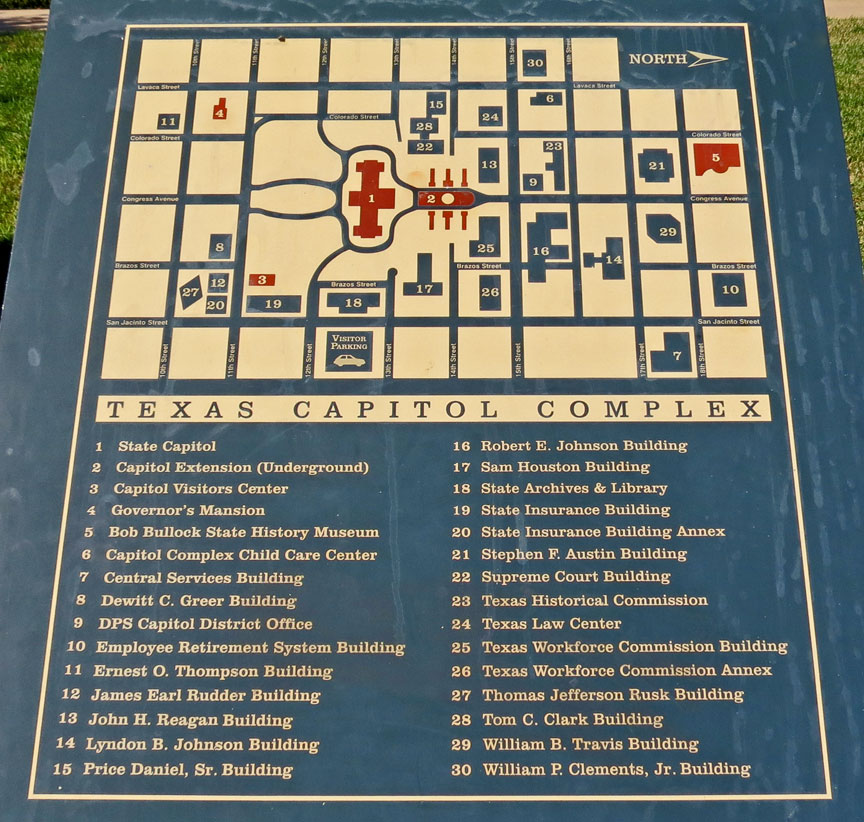 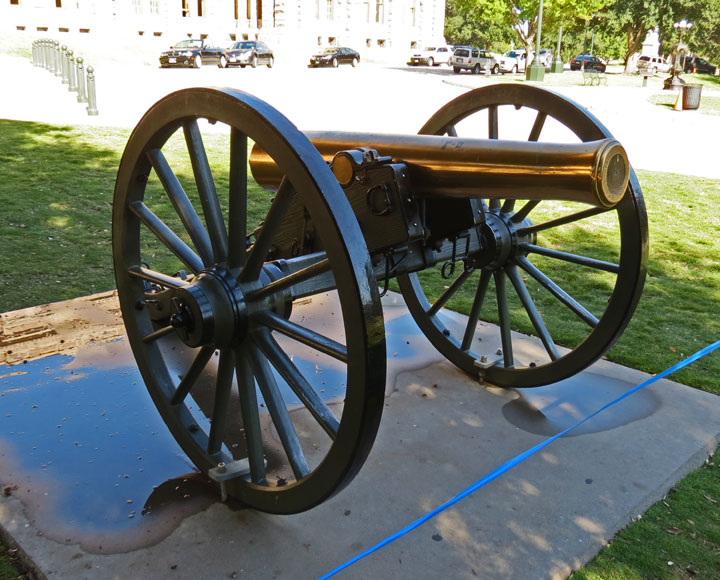 Located four blocks south of the University of Texas at Austin, the Texas Capitol building is surrounded by 22 acres of grounds and monuments. There are 17 monuments that surround the Texas Capitol. William Munro Johnson, civil engineer, was hired in 1888 to improve the appearance of the grounds. By the time the first monument, commemorating the Heroes of the Alamo, was installed in 1891, the major components of Johnson's plan were in place. These included a "Great Walk" of black and white diamond-patterned pavement shaded by trees. The four oldest monuments are the Heroes of the Alamo, Volunteer Firemen, Confederate Soldiers and Terry's Texas Rangers, and flank the tree-lined Great Walk. 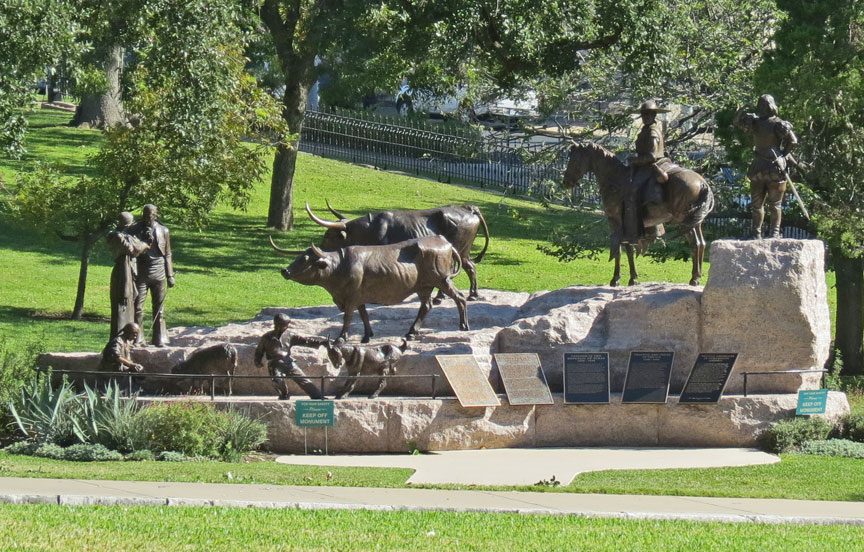 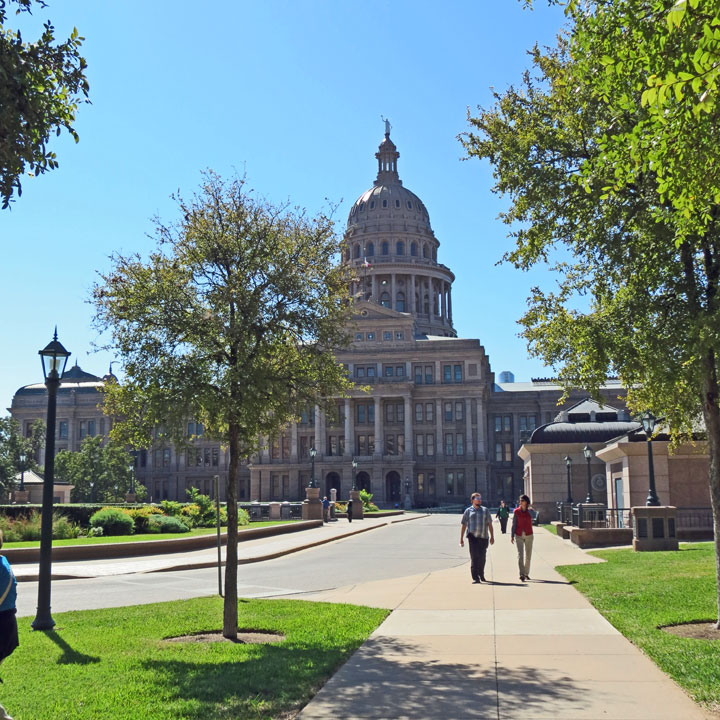 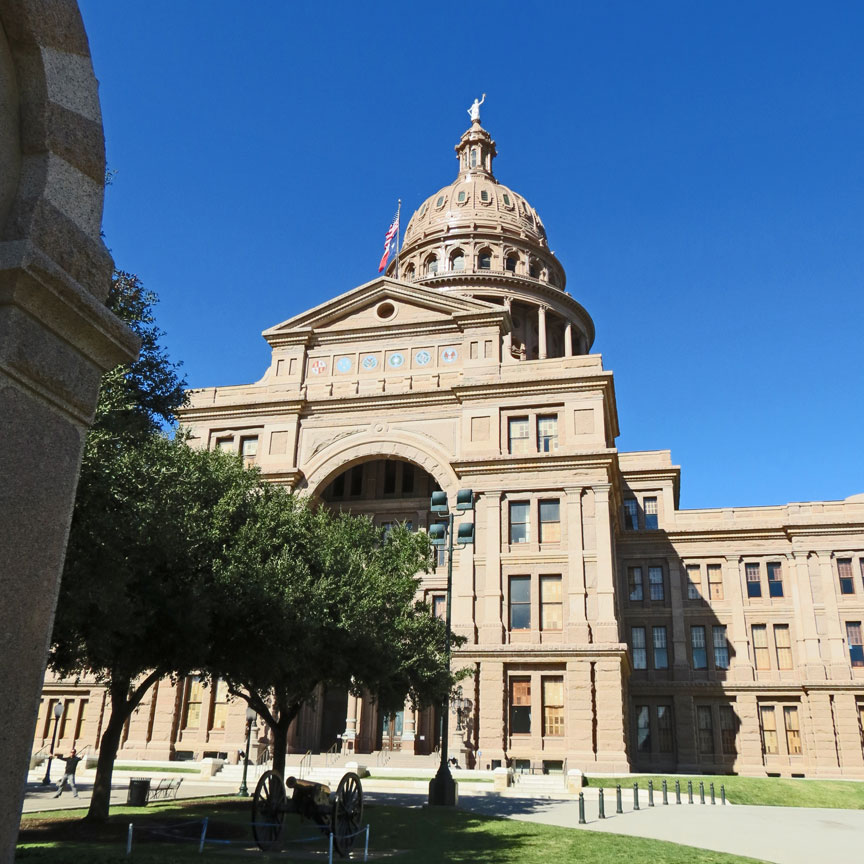 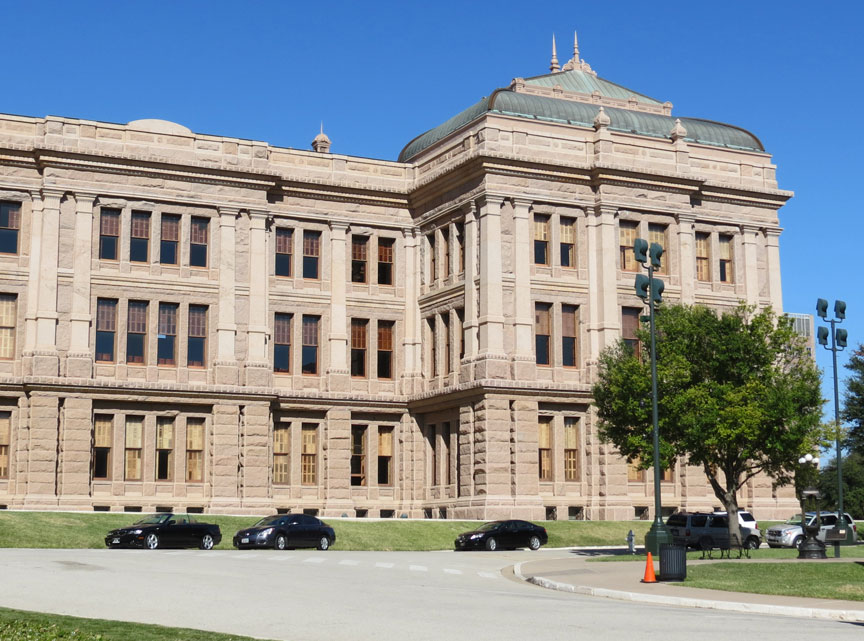 Photos of the legislative wing interiors 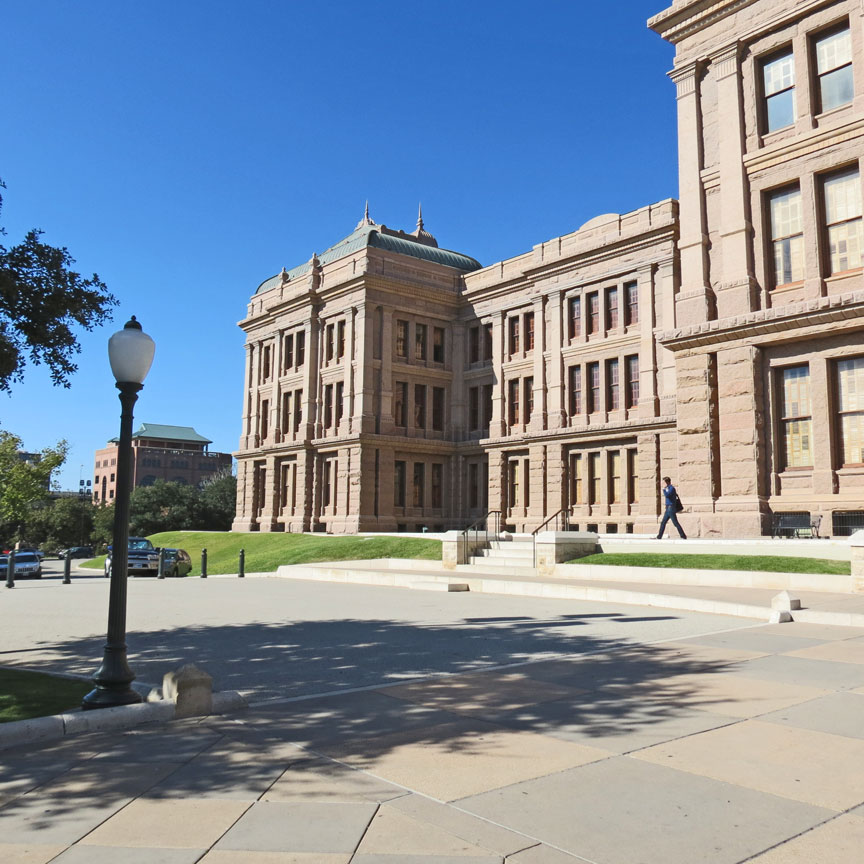 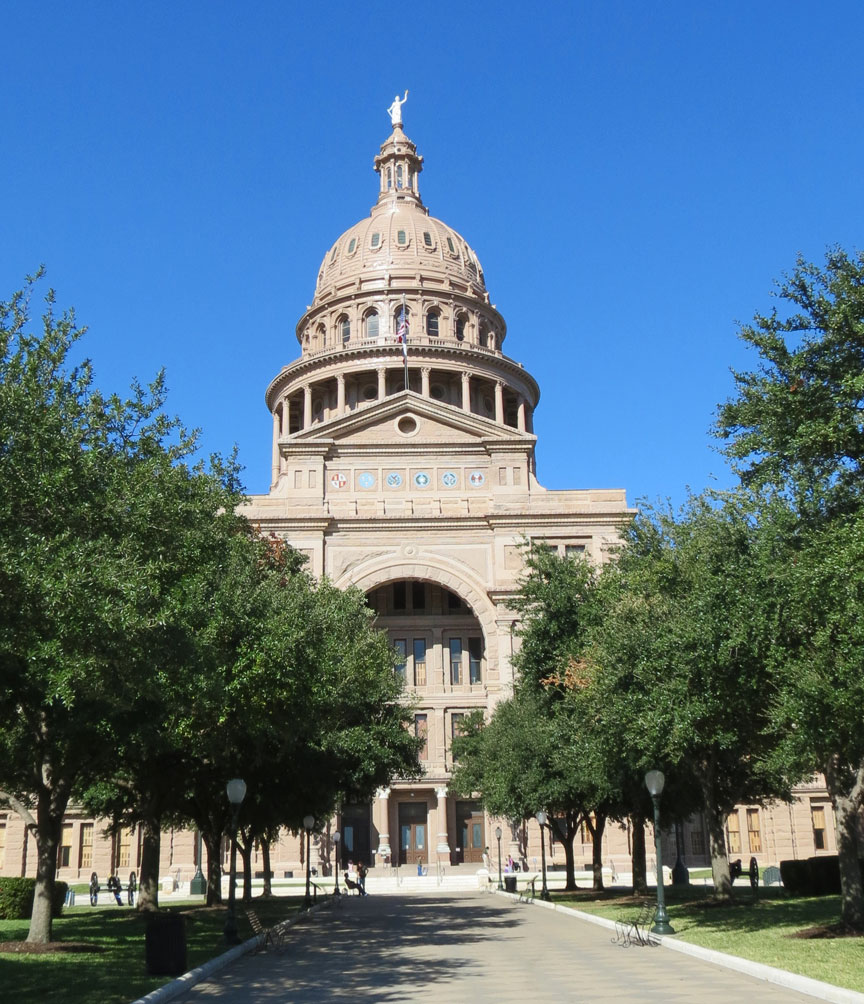 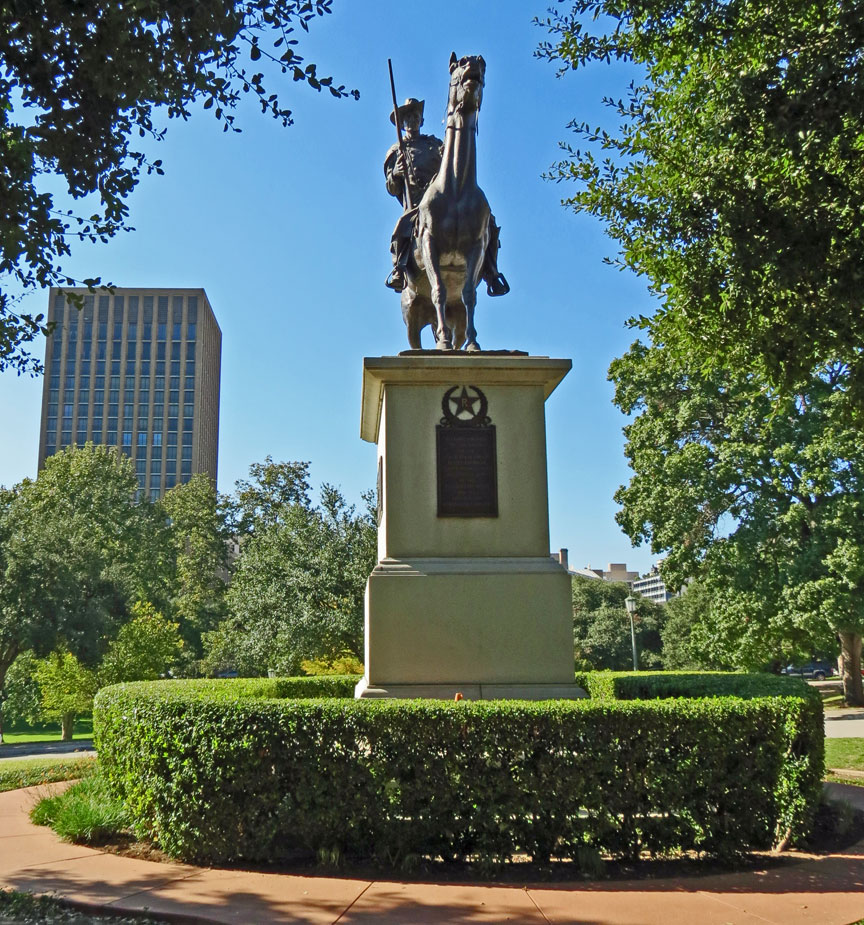 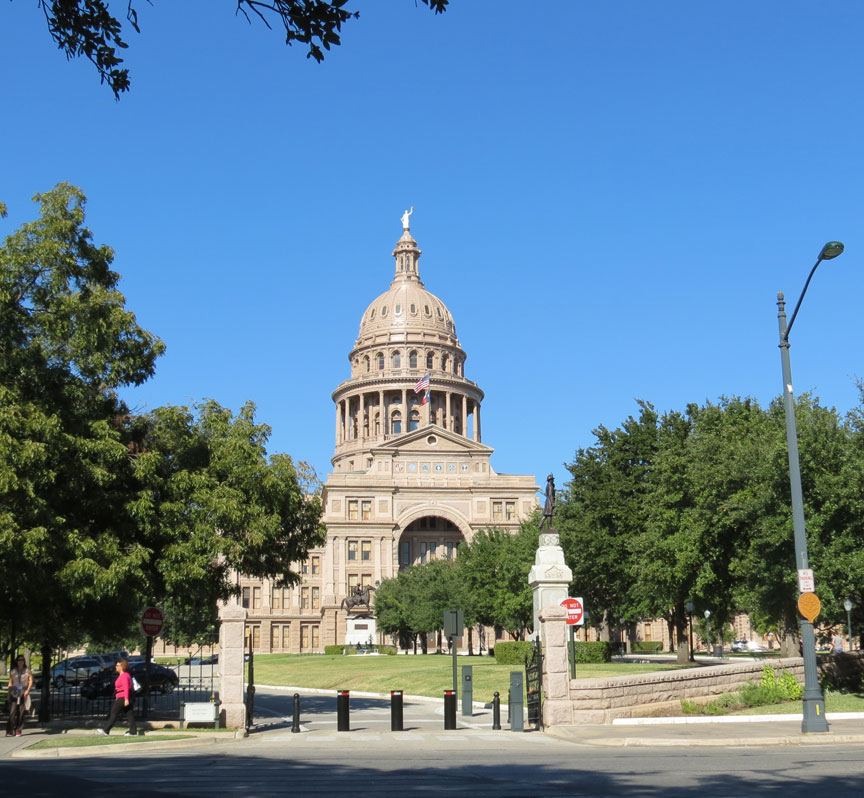 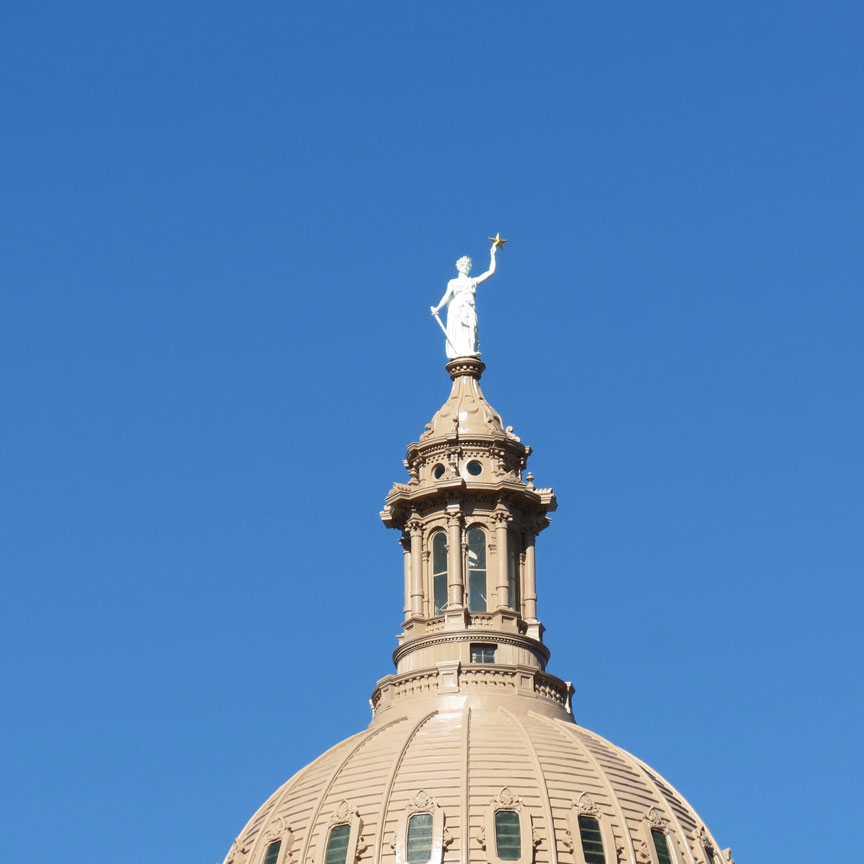 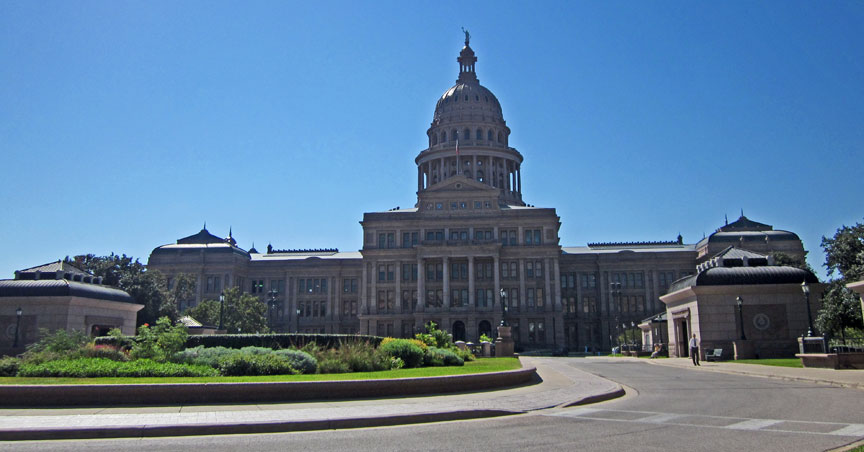