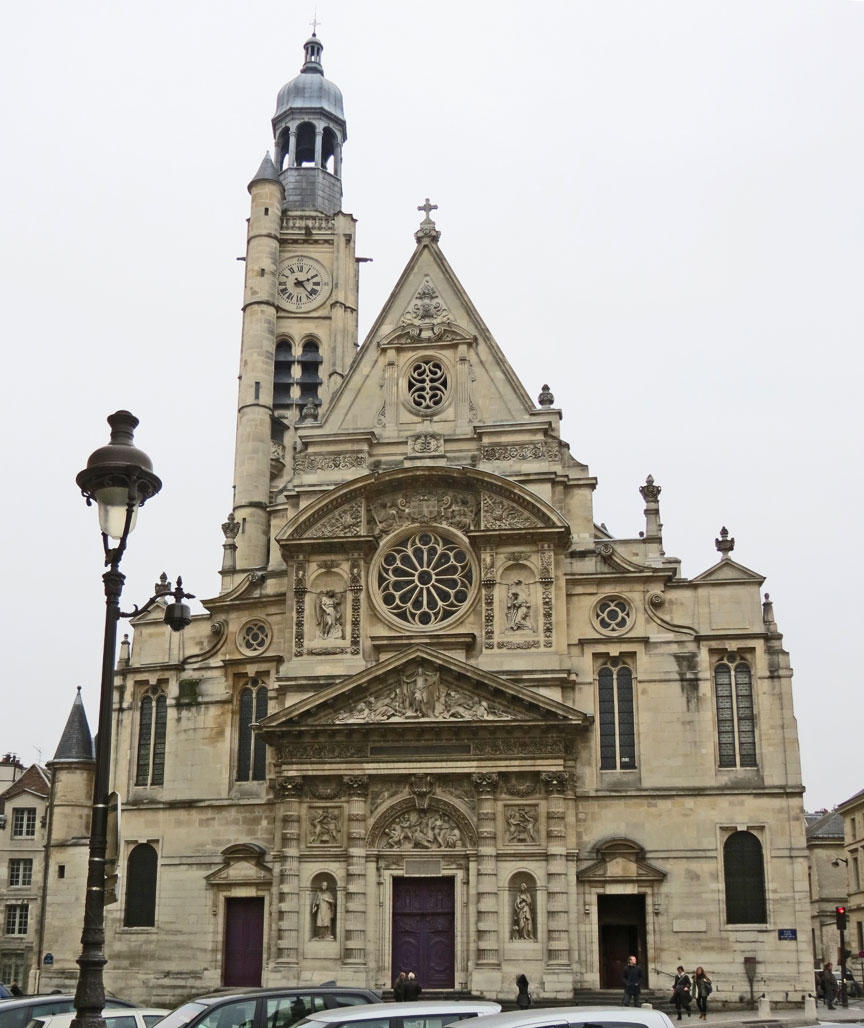 Saint-Étienne-du-Mont is a church in Paris, France, located on the Montagne Sainte-Geneviève in the Ve arrondissement, near the Panthéon. It contains the shrine of St. Geneviève, the patron saint of Paris. The church also contains the tombs of Blaise Pascal and Jean Racine. Jean-Paul Marat is buried in the church's cemetery.

Renowned organist, composer, and improviser Maurice Duruflé held the post of Titular Organist at Saint-Étienne-du-Mont from 1929 until his death in 1986. 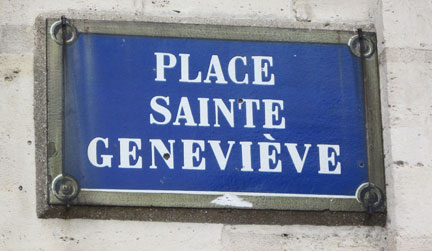 The church of Saint-Etienne-du-Mont originated in the abbey of Sainte-Genevieve, where the eponymous saint had been buried in the 6th century. Devoted to the Virgin Mary, then to St. John the Apostle, the place was too small to accommodate all the faithful. In 1222, Pope Honorius III authorized the establishment of an autonomous church, which was devoted this time to St Etienne, then the patron saint of the old cathedral of Paris. 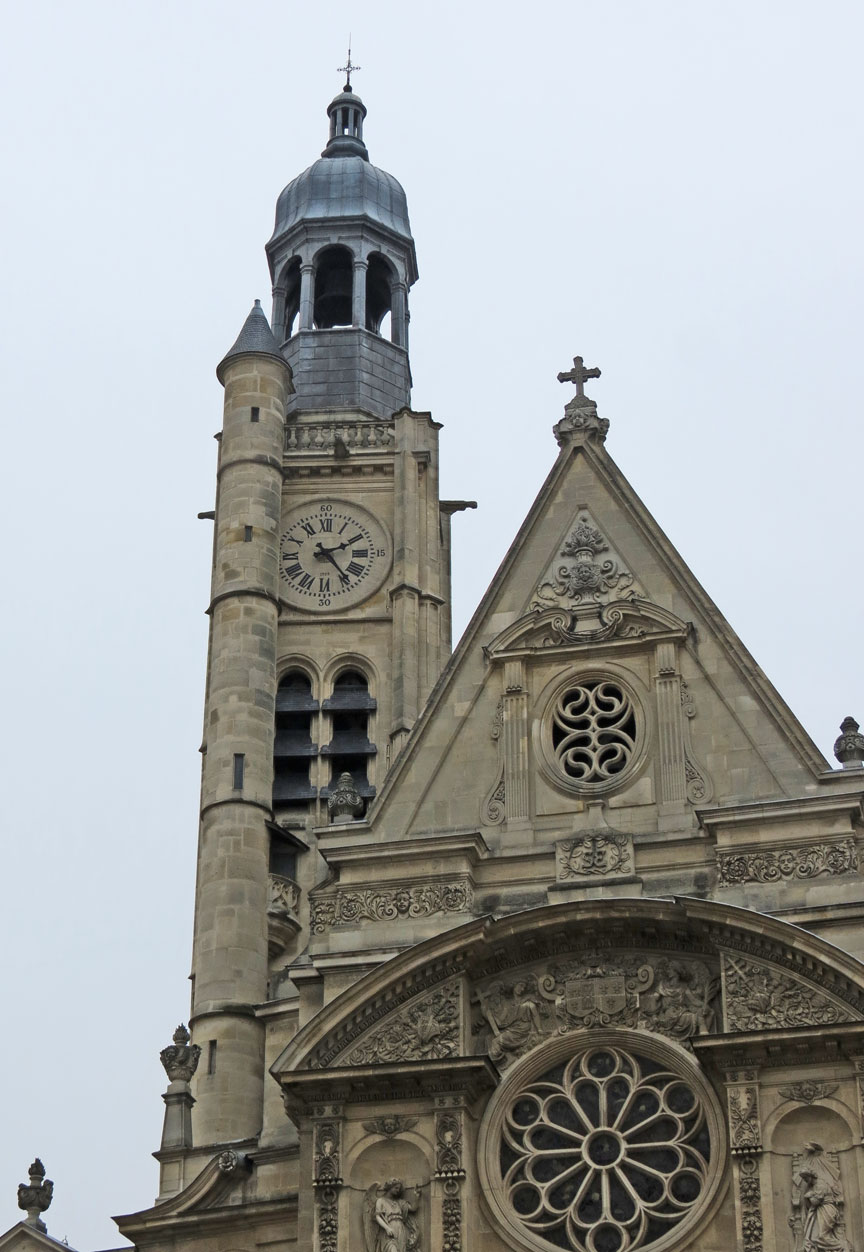 Soon, the new building was overwhelmed by an increasingly dense population: the Sorbonne and many colleges were located on the territory of the parish. It was enlarged in 1328, but a complete reconstruction became necessary from the 15th century. In 1492, the monks Génovéfains donated a portion of their land for the construction of the new church. 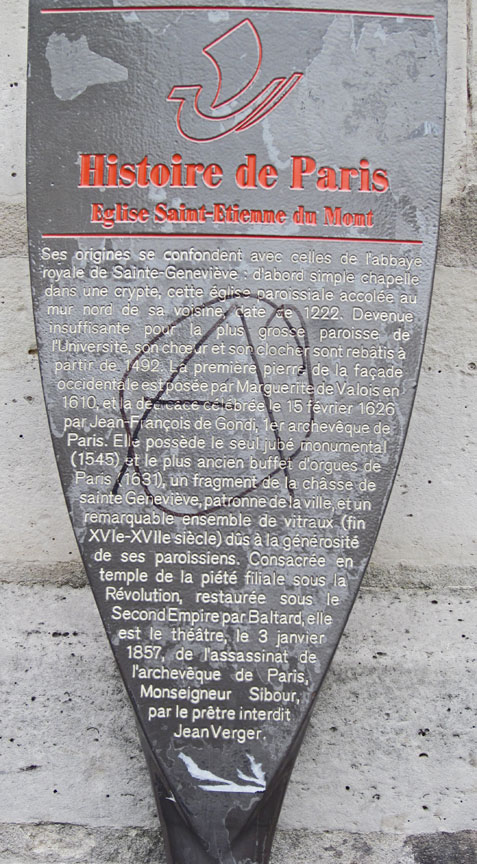 This involved several steps. Under the direction of architect Stephen Viguier, the apse and the bell tower was sketched in 1494, the first two bells were cast in 1500. The choir of flamboyant Gothic, was completed in 1537 and the following year, it was the turn of the frame to be raised. The loft was built around 1530-1535. 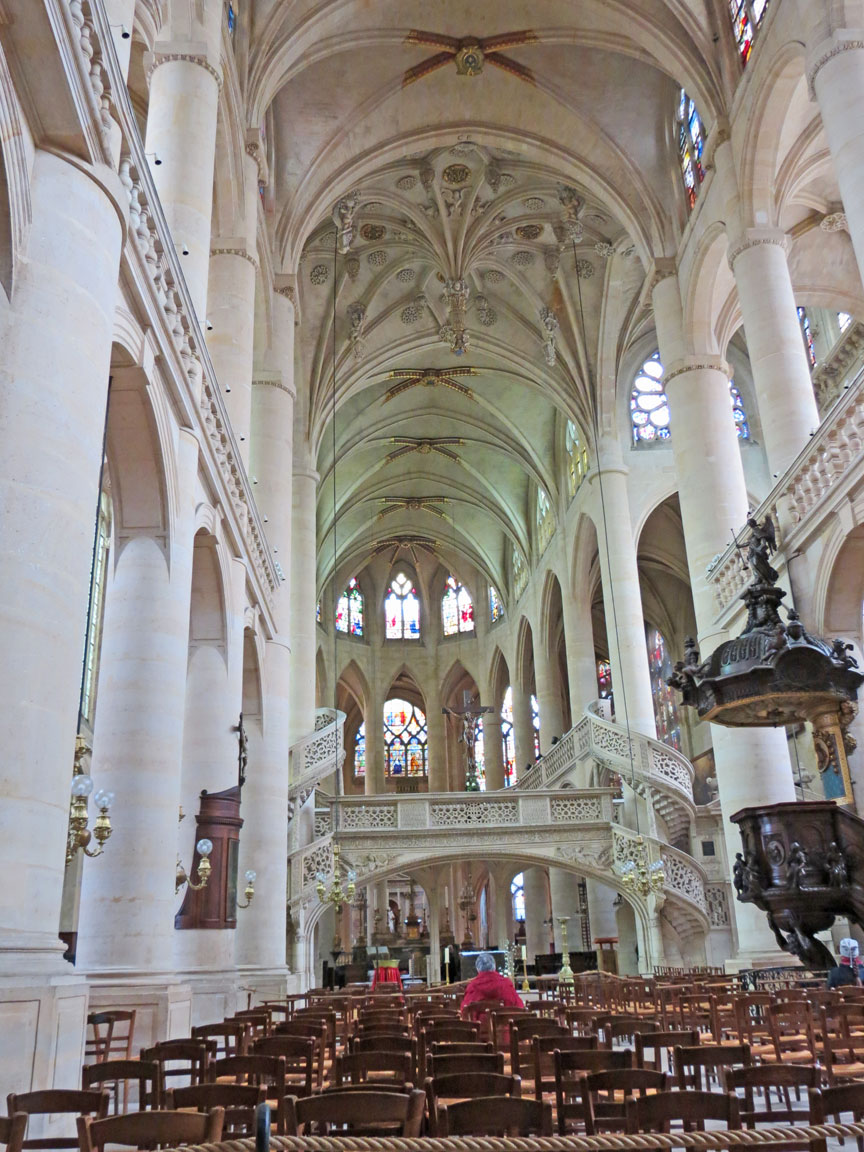 In 1541, Guy, Bishop of Megara, blessed the altars of the chapels of the apse. The same year, the parish awarded contracts for the windows and statues from Parisian artisans. The nave, from the Renaissance period, was not hunched before 1584. The first stone of the facade was laid in 1610 by Marguerite de Valois, who had agreed to do so in a personal donation of 3000 pounds. 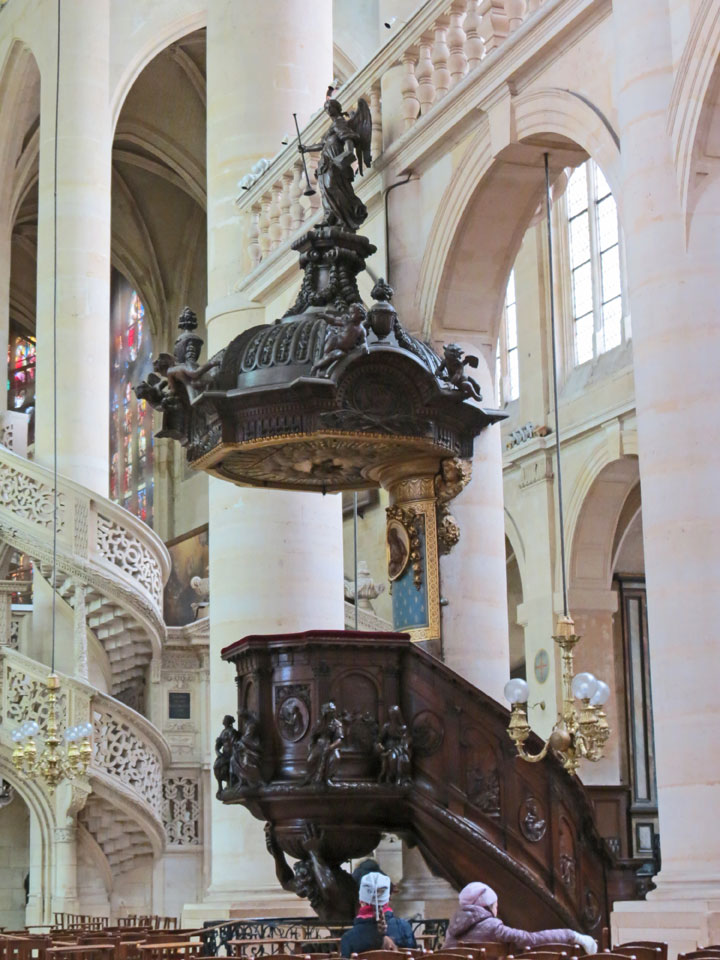 The church was dedicated on February 25, 1626 by Jean-François de Gondi, first archbishop of Paris, Cardinal de Retz's uncle. Nevertheless, developments continued: in 1636, the organ was installed, the work of Pierre Pescheur. 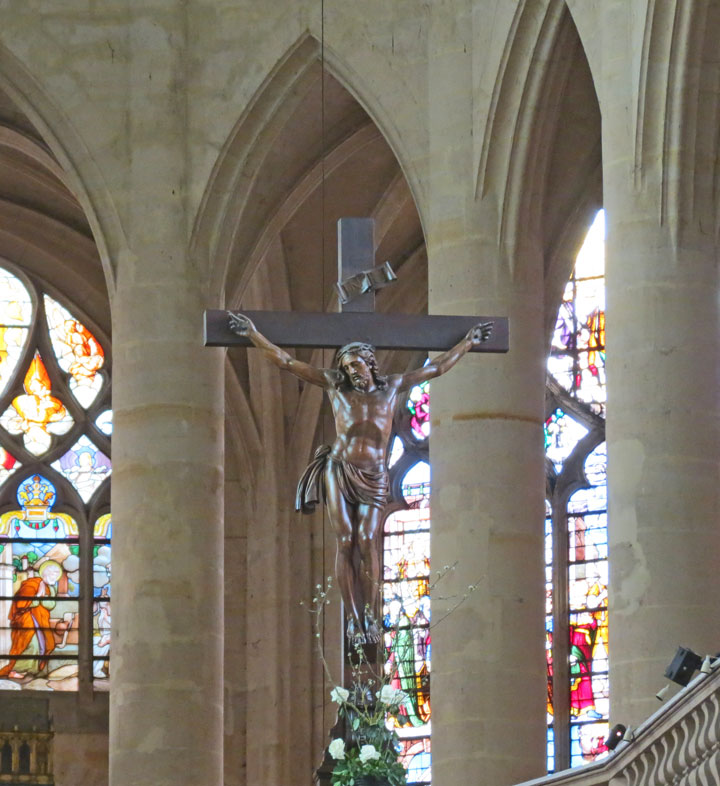 In 1651, a new pulpit was installed. It was also adjusted for the local wardens and housing for the priests. 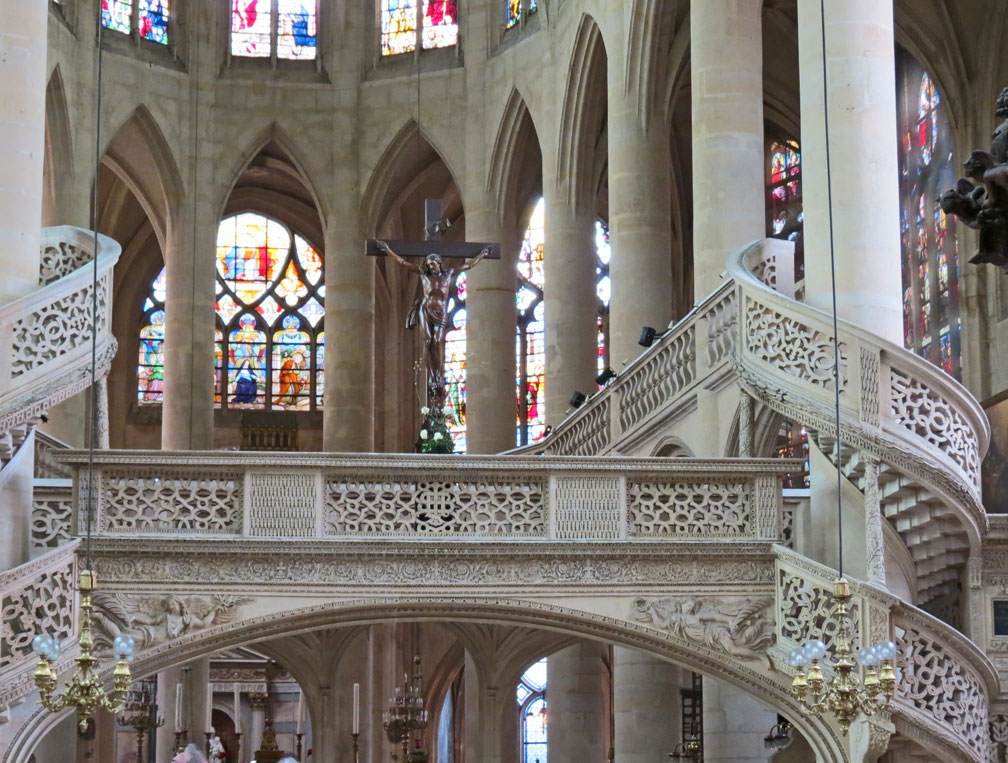 During the 17th and 18th century, the church of Saint-Etienne-du-Mont enjoyed great prestige. It was the scene of great processions where the shrine of Sainte-Genevieve went to Notre Dame and subsequently returned to his church. It also housed the remains of Pierre Perrault, the father of the author of Tales, the painter Eustache Le Sueur and Blaise Pascal. Those of Racine and Isaac de Sacy Lemaistre were also transferred in 1711 from Port-Royal in Saint-Etienne. 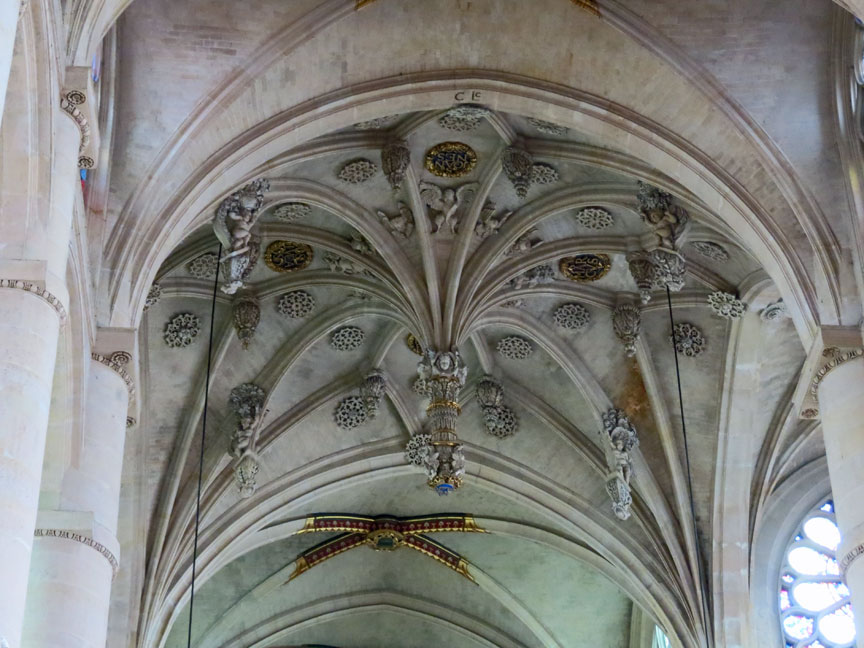 During the French Revolution, the church was first closed and then turned into a "Temple of Filial Piety." Catholic worship was restored in 1801, benefiting from the Concordat. The following year, the demolition of the abbey church of Sainte-Genevieve Abbey and the breakthrough Street Clovis made St. Stephen an independent building. Under the Second Empire, the church was restored by Victor Baltard: the front was raised and the statues destroyed by the revolutionaries, were returned. Baltard also built the chapel of catechisms. 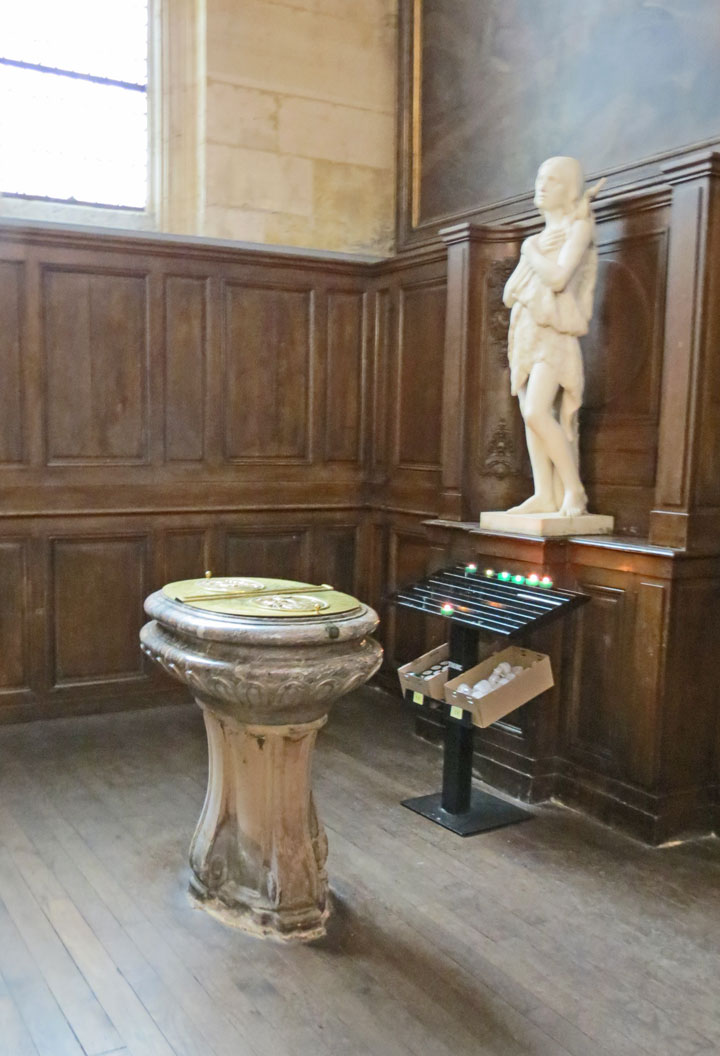 The 19th century was marked by many events. On January 10, 1805, Pope Pius VII celebrated Mass in the church. In 1833, Frederic Ozanam, a parishioner of St. Stephen, founded with friends the Society of St. Vincent de Paul. On January 3, 1857, Bishop Marie-Dominique-Auguste Sibour, was assassinated with cries of "Down with the goddesses!" by the priest Jean-Louis Verger, opposed to the dogma of the Immaculate Conception. A plaque at the entrance to the nave marks the grave of the prelate, who was to inaugurate the novena of St. Genevieve. The occultist Eliphas Levi was indirectly involved in this tragic event. 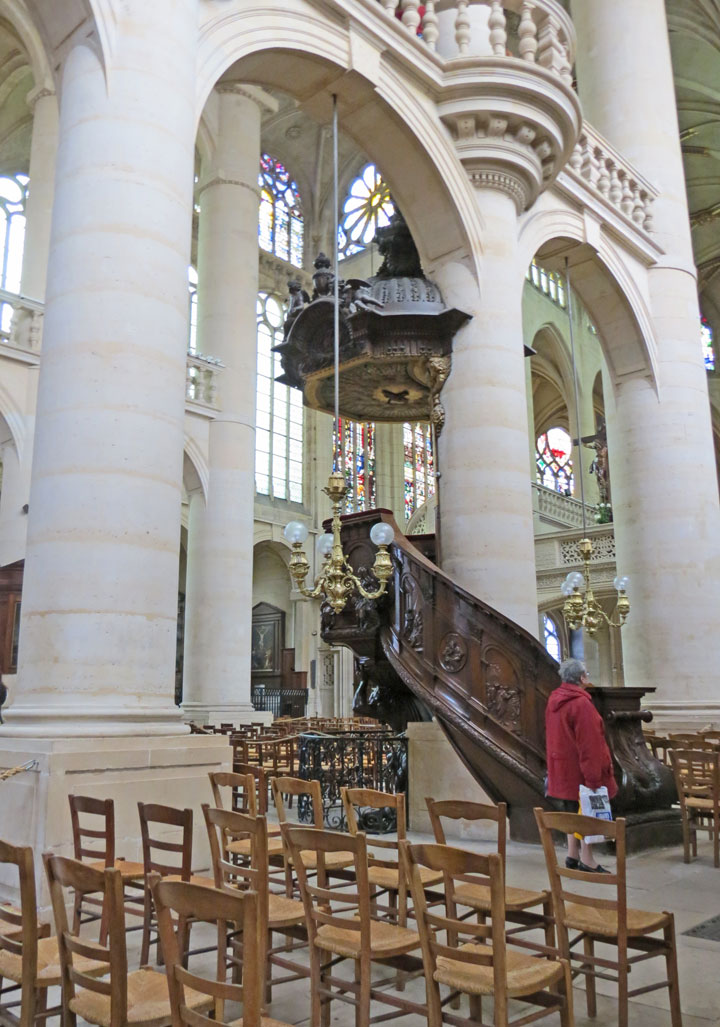 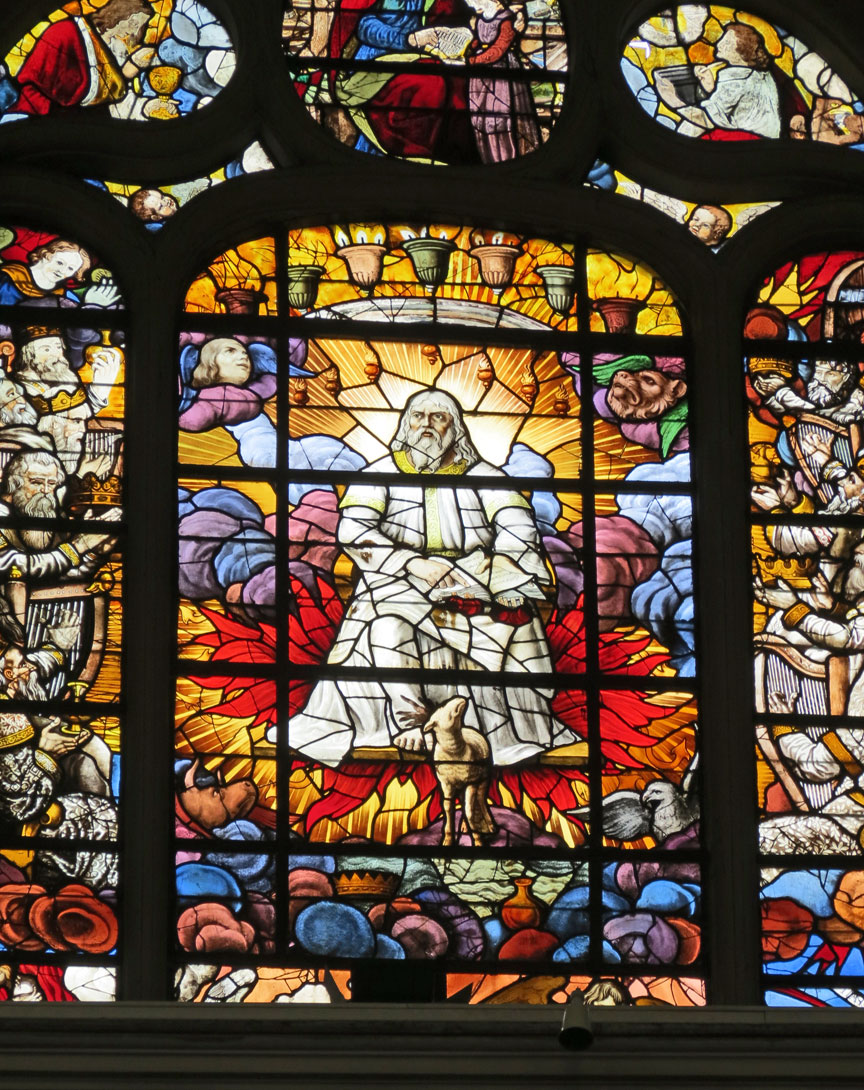 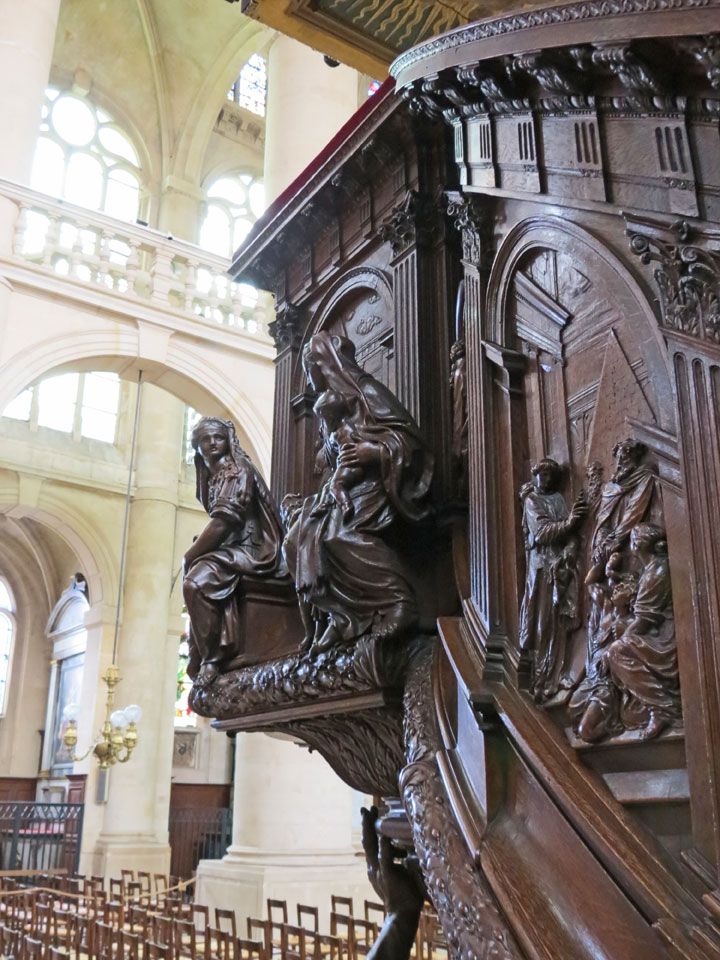 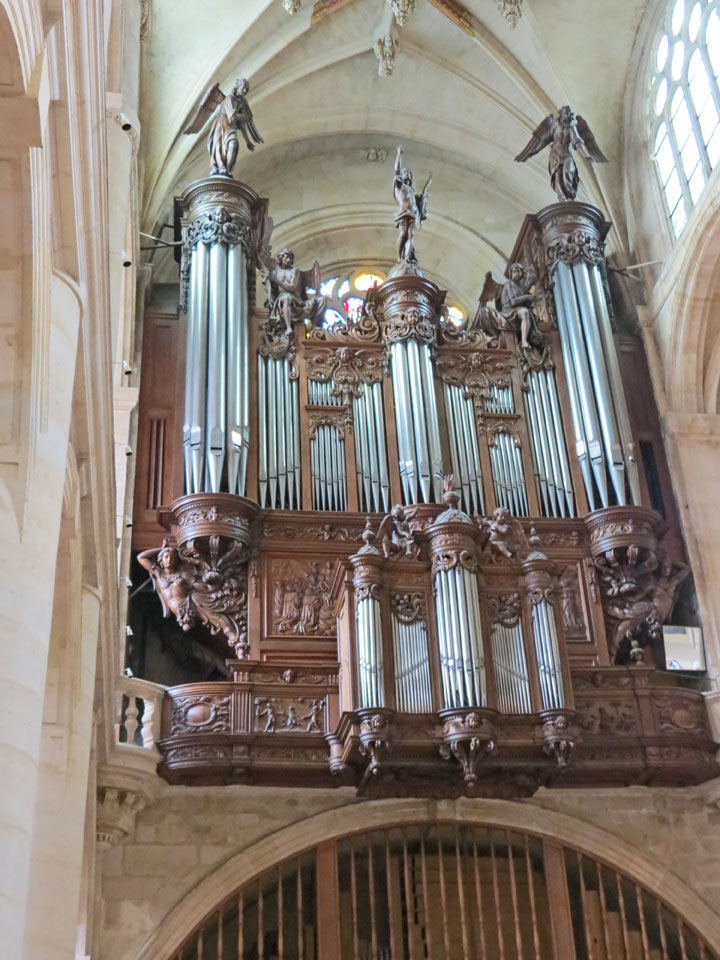 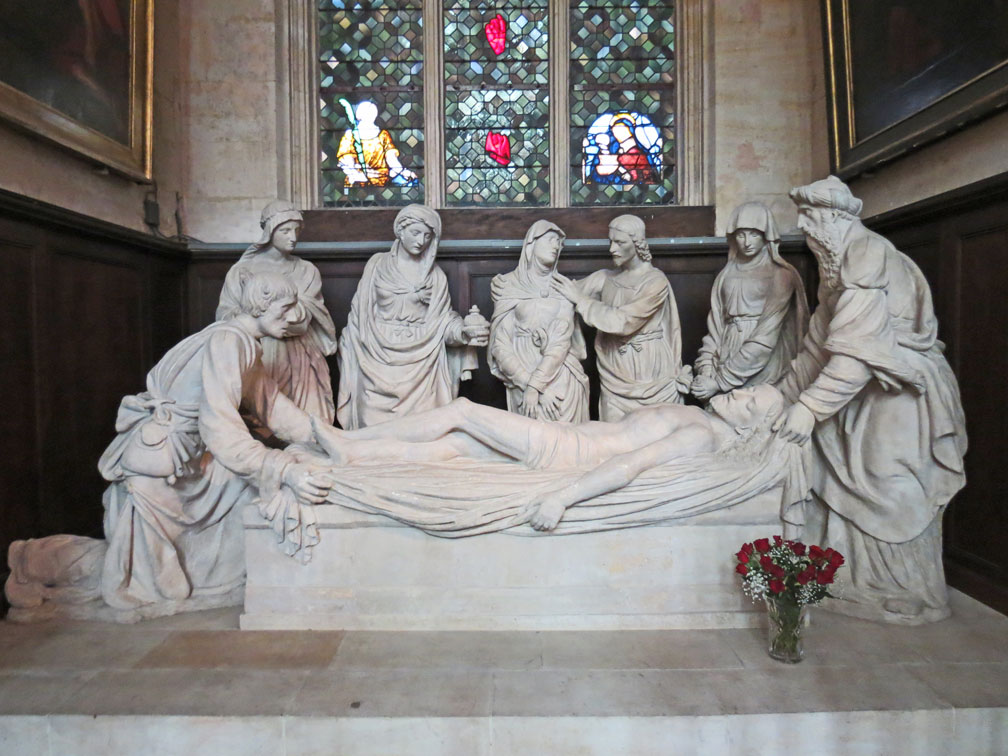 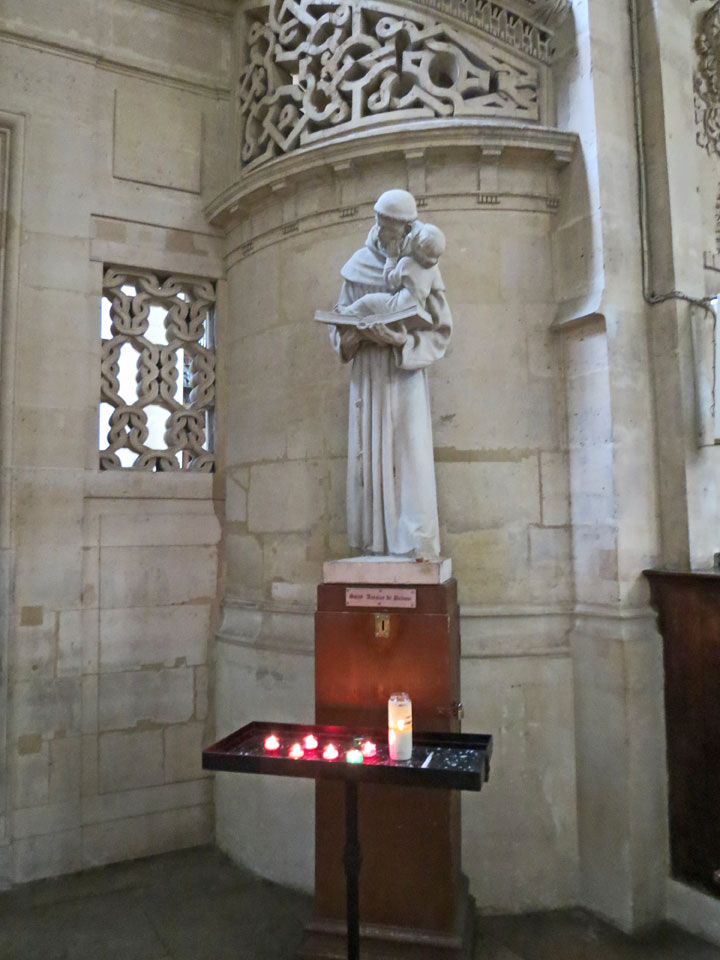 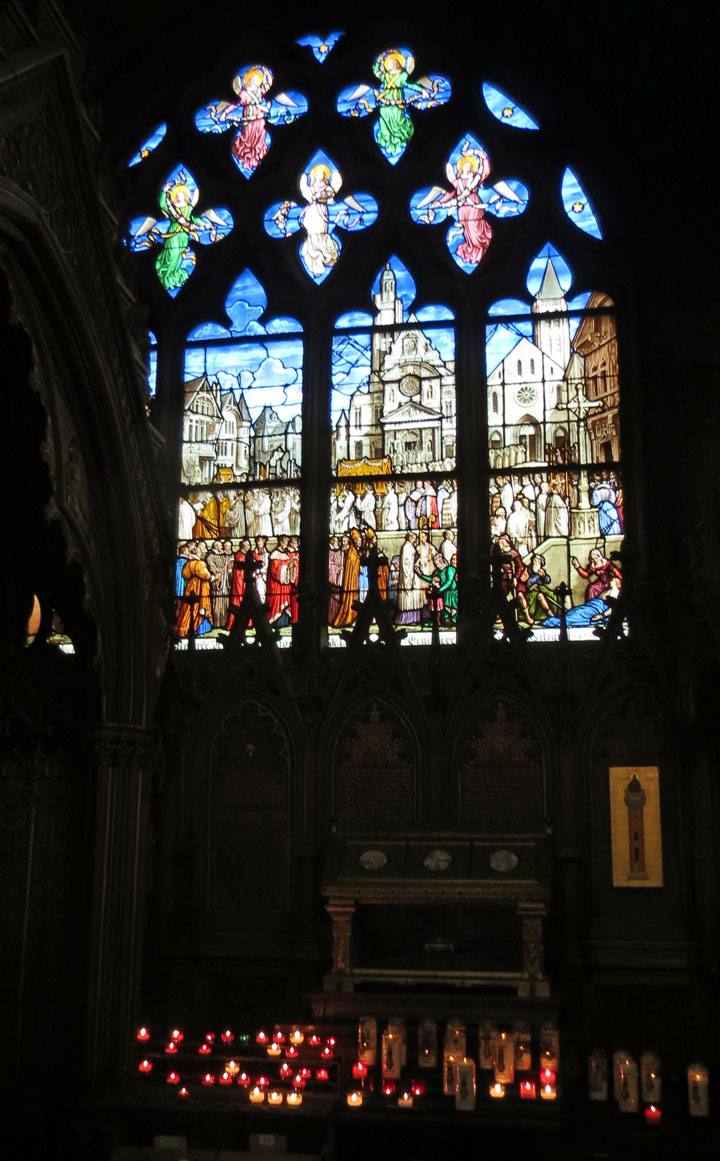 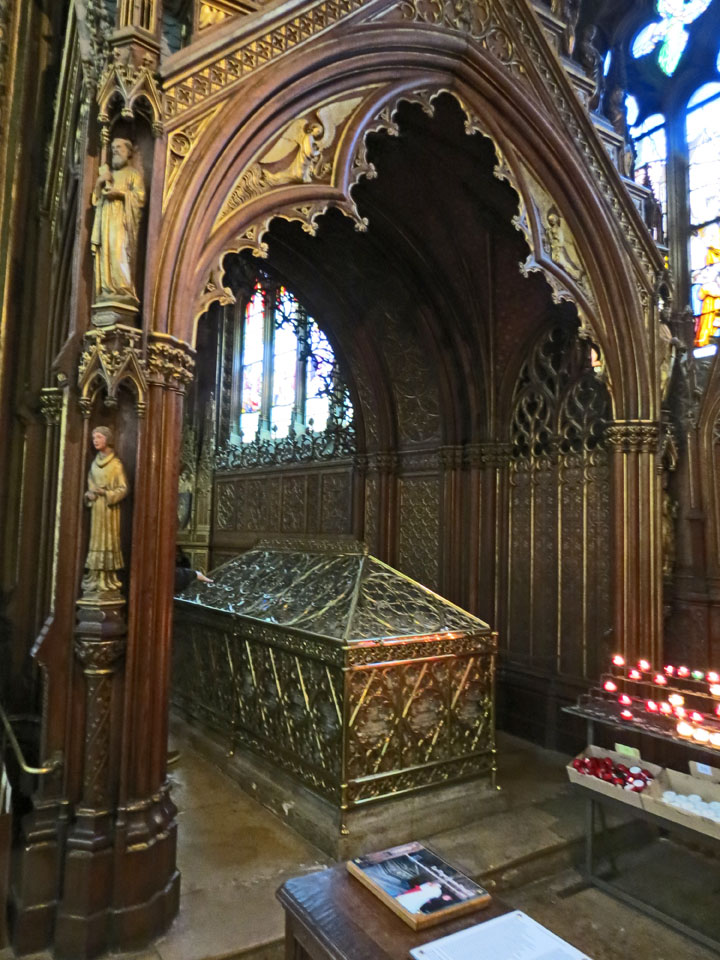 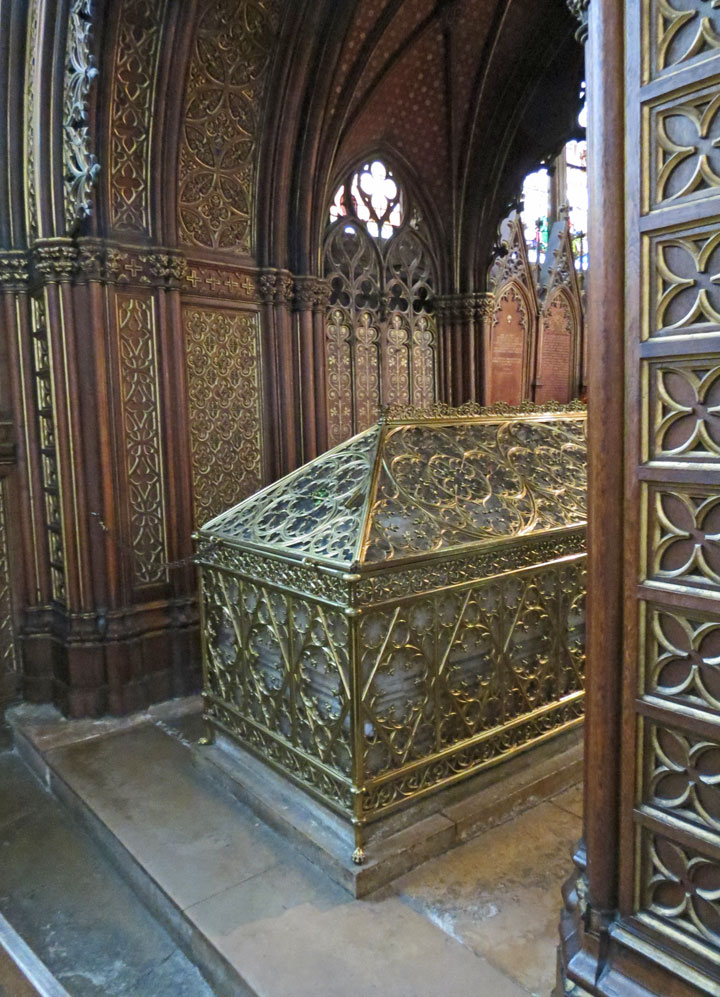 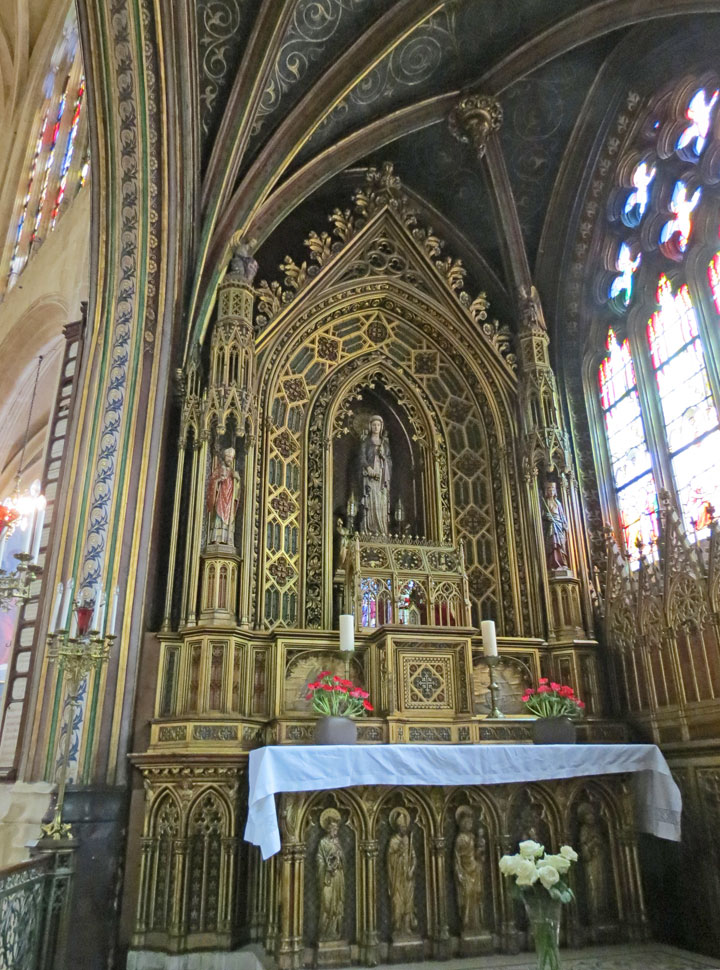 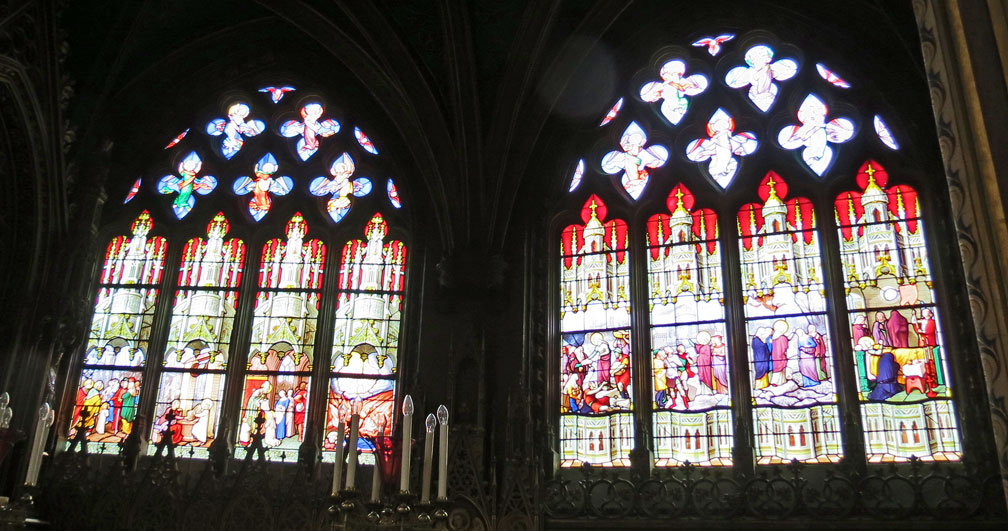 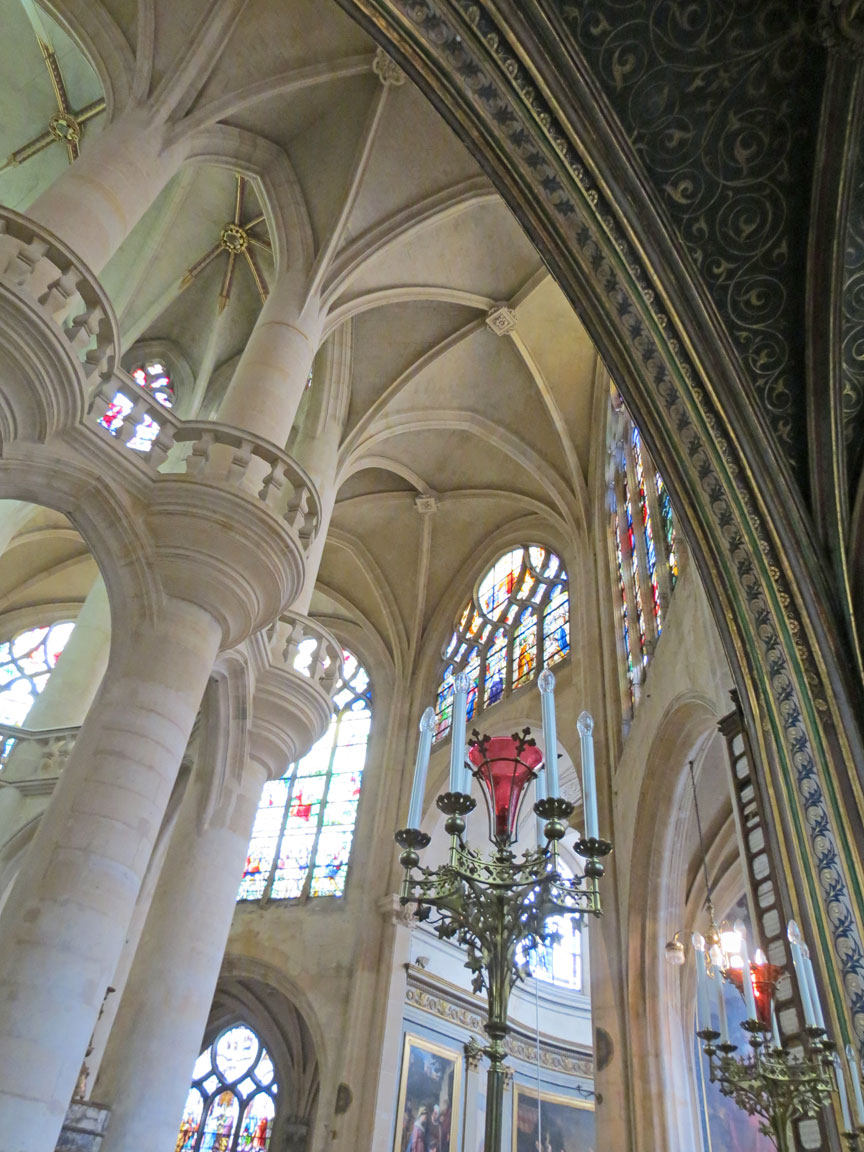 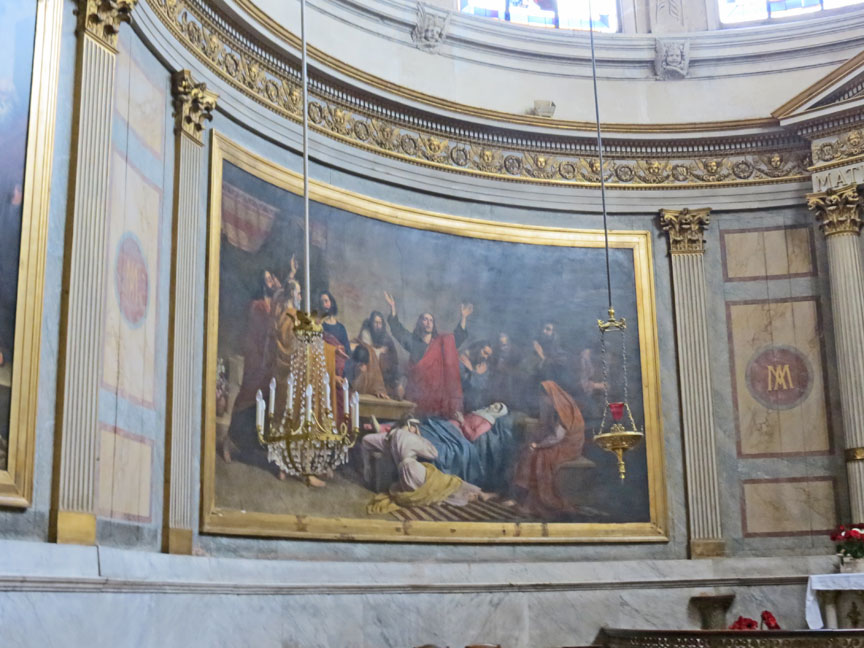 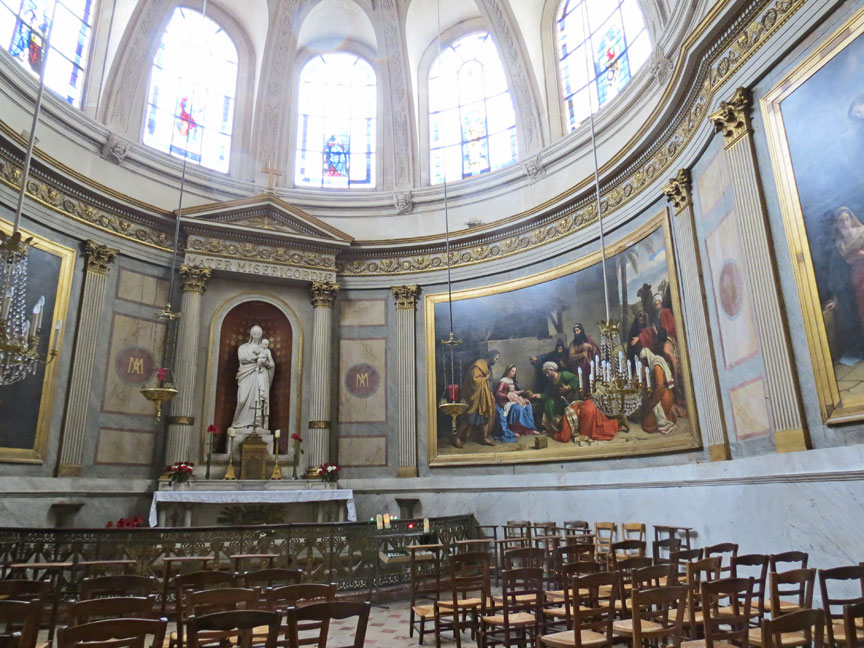 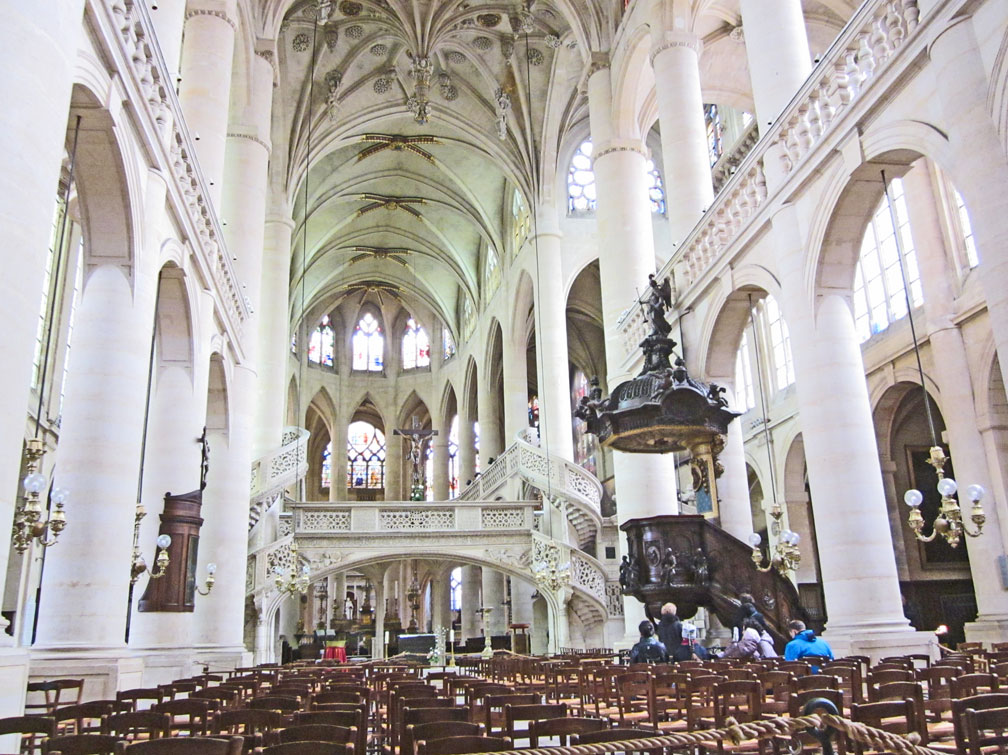 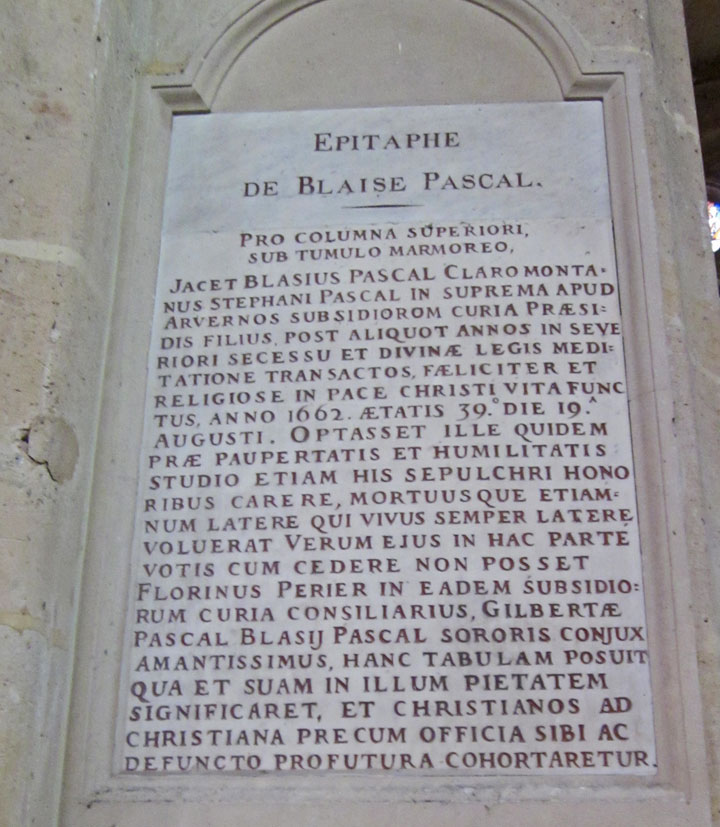 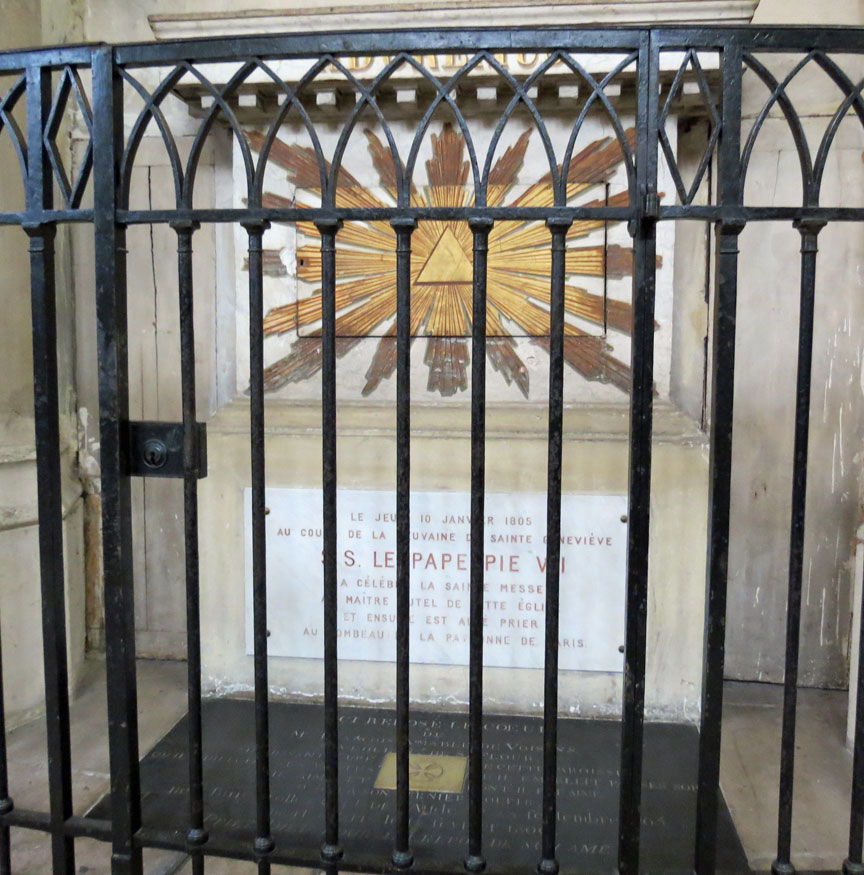 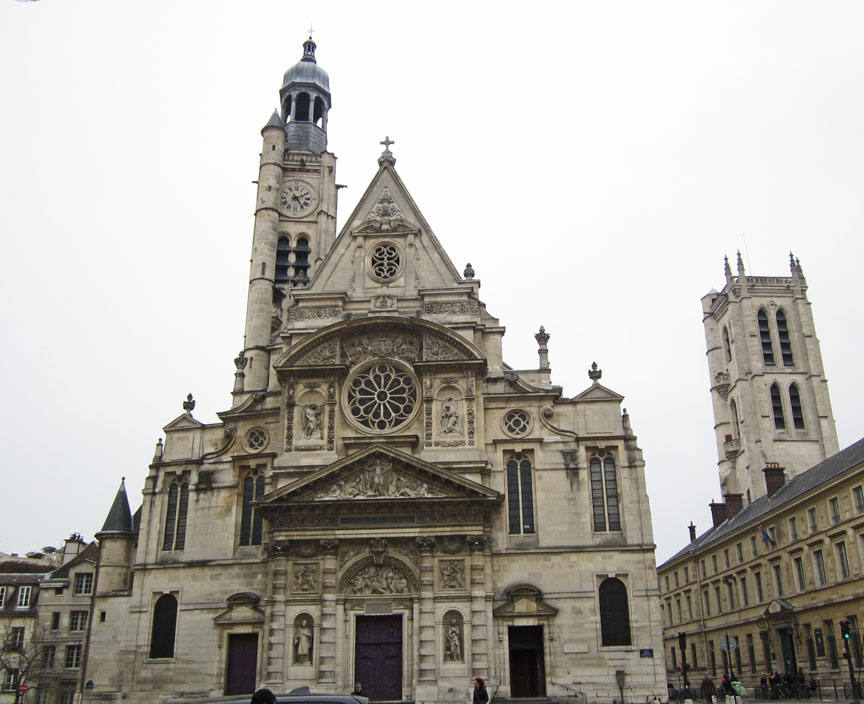