The Paris Opera (French: Opéra de Paris) is the primary opera company of France. It was founded in 1669 by Louis XIV as the Académie d'Opéra, and shortly thereafter was placed under the leadership of Jean-Baptiste Lully and officially renamed the Académie Royale de Musique, but continued to be known more simply as the Opéra. Classical ballet as we know it today arose within the Paris Opera as the Paris Opera Ballet and has remained an integral and important part of the company. Currently called the Opéra National de Paris, it mainly produces operas at its modern 2700-seat theatre Opéra Bastille which opened in 1989, and ballets and some classical operas at the older 1970-seat Palais Garnier which opened in 1875. Small scale and contemporary works are also staged in the 500-seat Amphitheatre under the Opéra Bastille. 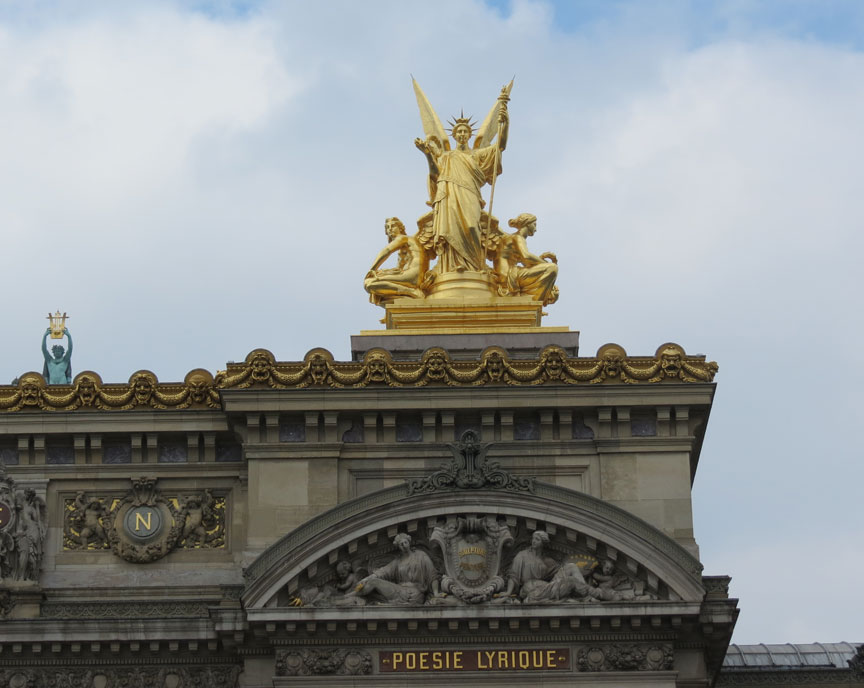 The company's annual budget is in the order of 200 million euros, of which 100 million come from the French state and 70 million from box office receipts. With this money, the company runs the two houses and supports a large permanent staff, which includes the orchestra of 170, a chorus of 110 and the corps de ballet of 150. 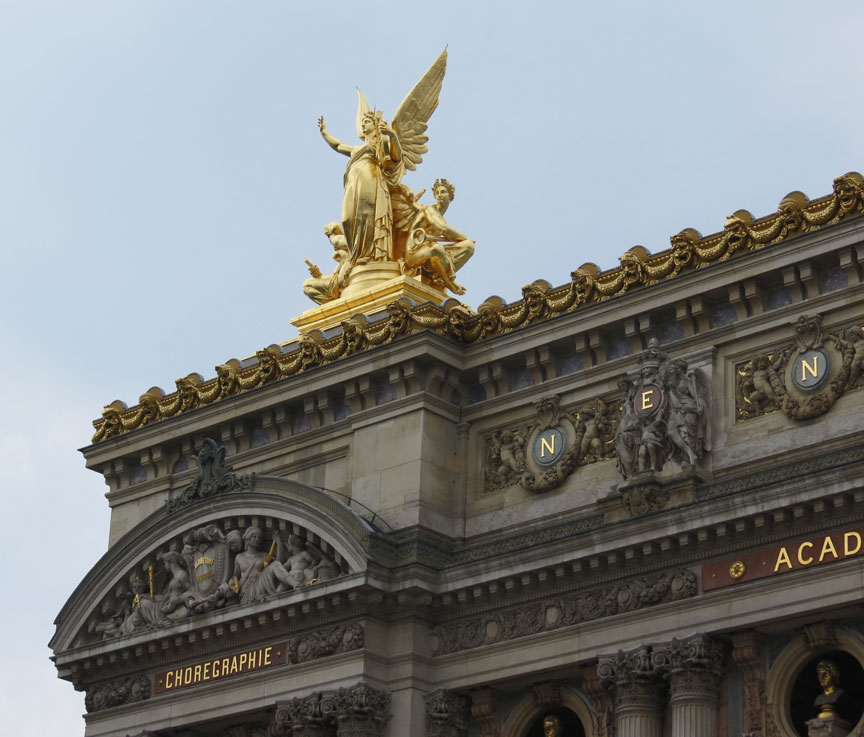 Each year, the Opéra presents about 380 performances of opera, ballet and other concerts, to a total audience of about 800,000 people (of which 17% come from abroad), which is a very good average seat occupancy rate of 94%. In the 2012/13 season, the Opéra presents 18 opera titles (two in a double bill), 13 ballets, 5 symphonic concerts and two vocal recitals, plus 15 other programmes. The company's training bodies are also active, with 7 concerts from the Atelier Lyrique and 4 programmes from the École de Danse. 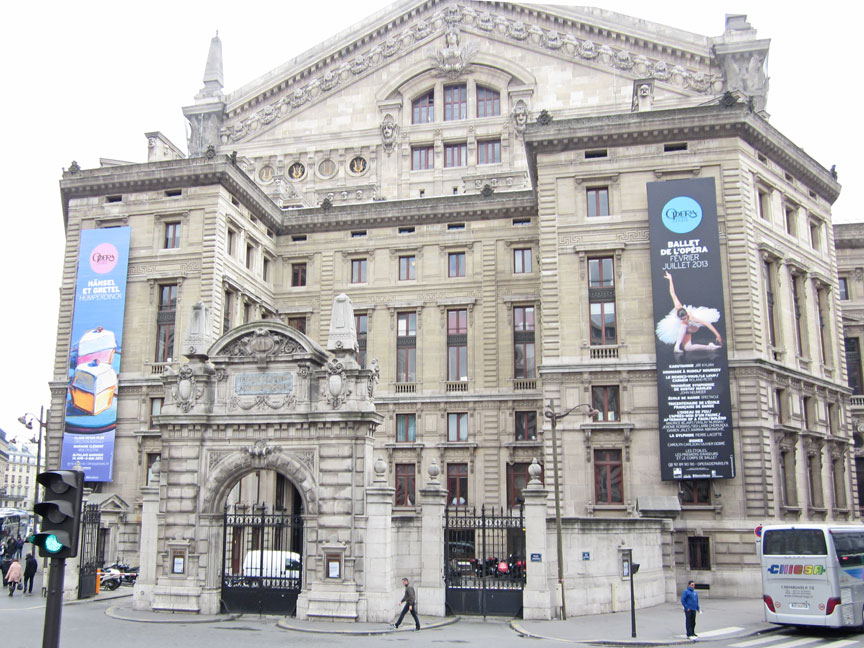 The poet Pierre Perrin began thinking and writing about the possibility of French opera in 1655, more than a decade before the official founding of the Paris Opera as an institution. He believed that the prevailing opinion of the time that the French language was fundamentally unmusical was completely incorrect. Seventeenth-century France offered Perrin essentially two types of organization for realizing his vision: a royal academy or a public theater. In 1666 he proposed to the minister Colbert that "the king decree 'the establishment of an Academy of Poetry and Music' whose goal would be to synthesize the French language and French music into an entirely new lyric form." Even though Perrin's original concept was of an academy devoted to discussions of French opera, the king's intention was in fact a unique hybrid of royal academy and public theatre, with an emphasis on the latter as an institution for performance. On 28 June 1669 Louis XIV signed the Privilège accordé au Sieur Perrin pour l'établissement d'une Académie d'Opéra en musique, & Vers François (Privilege granted to Sir Perrin for the establishment of an Academy of Opera in music, & French Verse). The wording of the privilège, based in part on Perrin's own writings, gave him the exclusive right for 12 years to found anywhere in France academies of opera dedicated to the performance of opera in French. He was free to select business partners of his choice and to set the price of tickets. No one was to have the right of free entry including members of the royal court, and no one else could set up a similar institution. Although it was to be a public theatre, it retained its status as royal academy in which the authority of the king as the primary stakeholder was decisive. The monopoly, originally intended to protect the enterprise from competition during its formative phase, was renewed for subsequent recipients of the privilege up to the early French Revolution. As Victoria Johnson points out "the Opera was an organization by nature so luxurious and expensive in its productions that its very survival depended on financial protection and privilege." 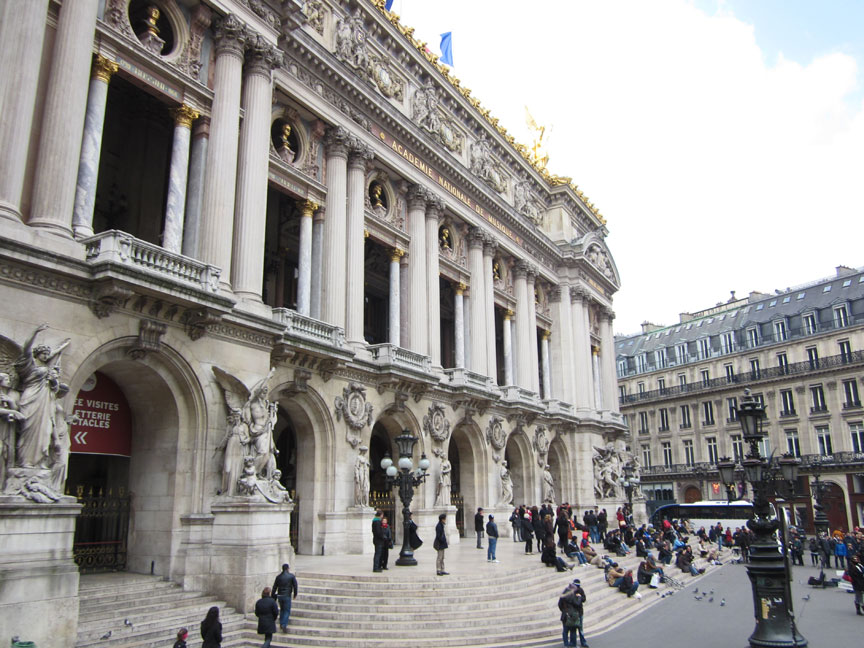 Perrin converted the Bouteille tennis court, located on the Rue des Fossés de Nesles (now 42 Rue Mazarine), into a rectangular facility with provisions for stage machinery and scenery changes and a capacity of about 1200 spectators. His first opera Pomone with music by Robert Cambert opened on 3 March 1671 and ran for 146 performances. A second work, Les peines et les plaisires de l'amour, with a libretto by Gabriel Gilbert and music by Cambert, was performed in 1672. 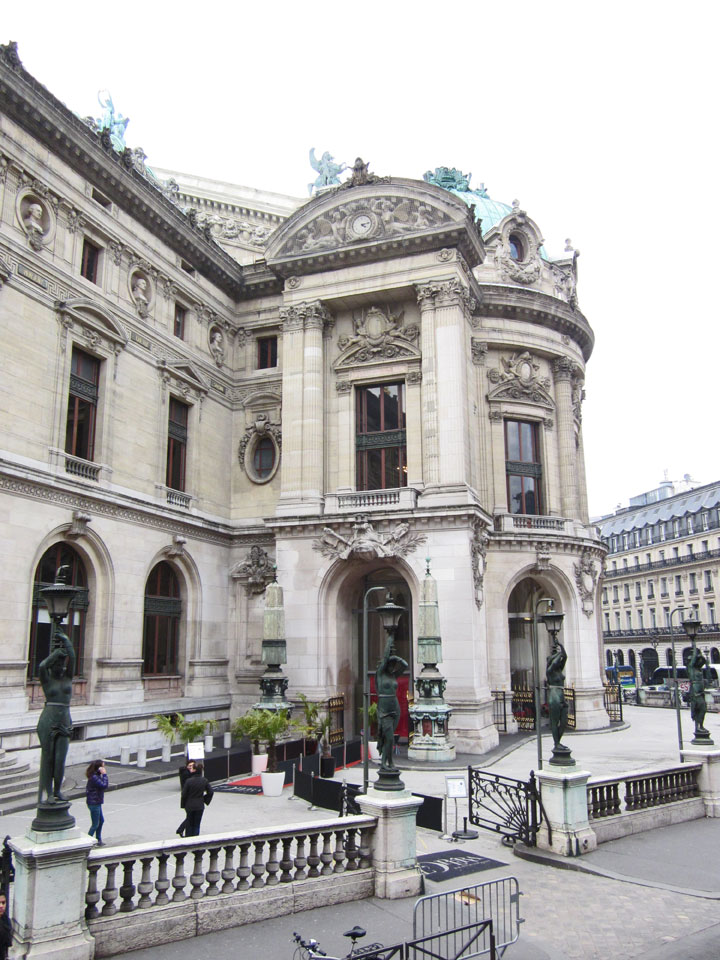 Despite this early success, Cambert and two other associates did not hesitate to swindle Perrin, who was imprisoned for debt and forced to concede his privilege on 13 March 1672 to the surintendant of the king's music Jean-Baptiste Lully. The institution was renamed the Académie Royale de Musique and came to be known in France simply as the Opéra. Within one month Lully had convinced the king to expand the privilege by restricting the French and Italian comedians to using two singers rather than six, and six instrumentalists, rather than twelve. Because of legal difficulties Lully could not use the Salle de la Bouteille, and a new theatre was built by Carlo Vigarani at the Bel Air tennis court on the Rue de Vaugirard. Later, Lully and his successors bitterly negotiated the concession of the privilege, in whole or in part, from the entrepreneurs in the provinces: in 1684 Pierre Gautier bought the authorisation to open a music academy in Marseille, then the towns of Lyon, Rouen, Lille and Bordeaux followed suit in the following years. 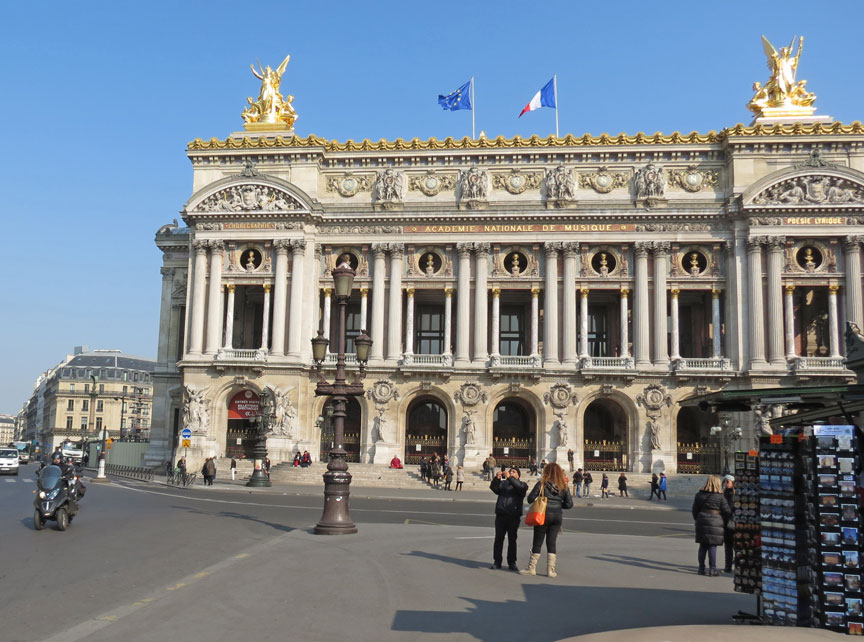 During Lully's tenure, the only works performed were his own. The first productions were the pastorale Les fêtes de l'Amour et de Bacchus (November 1672) and his first tragedie lyrique called Cadmus et Hermione (27 April 1673). 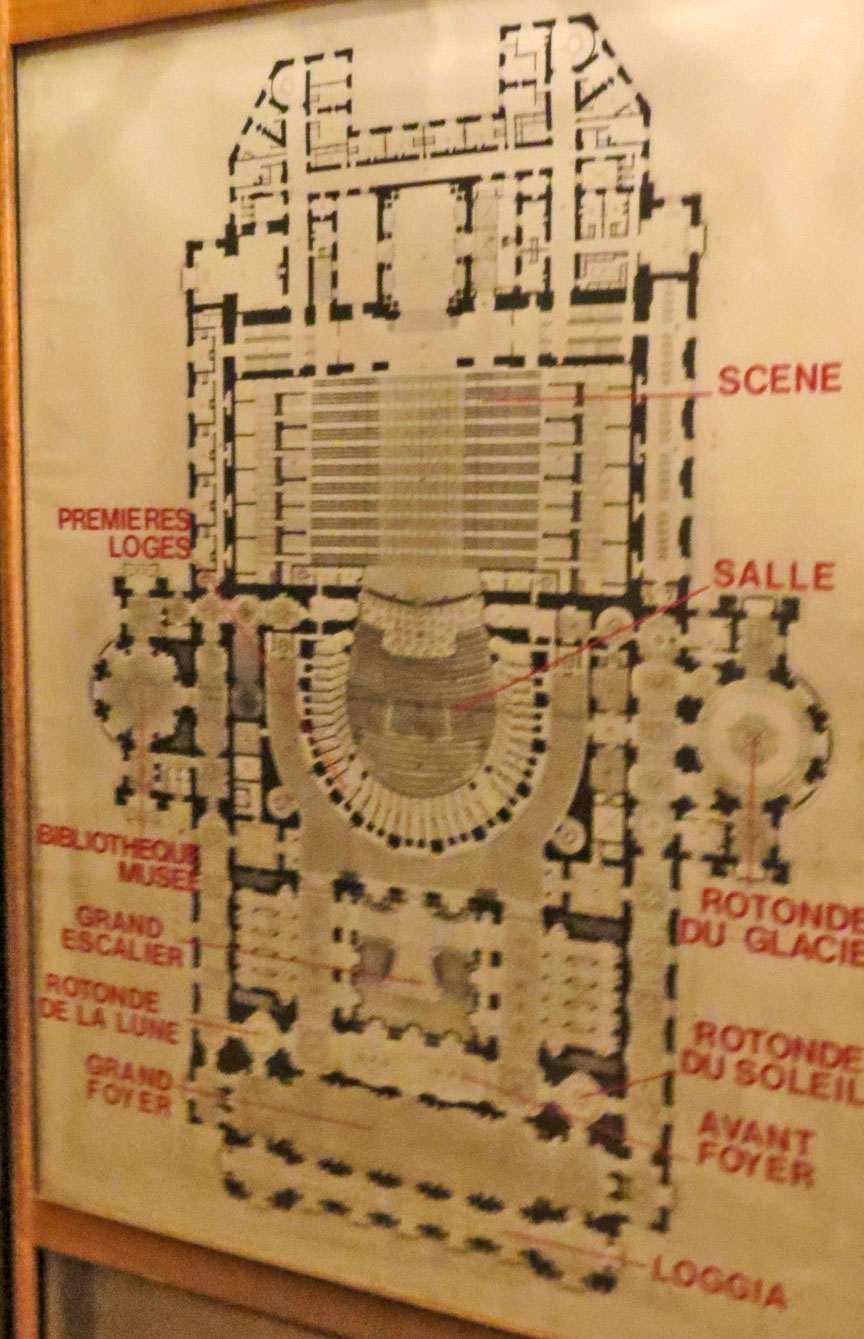 plan of the Salle du Palais-Royal

Photos of the Grand Foyer

After Molière's death in 1673, his troupe merged with the players at the Théâtre du Marais to form the Théâtre Guénégaud (at the same theatre that had been used by the Académie d'Opéra), and no longer needed the theatre built by Richelieu at his residence the Palais-Royal, near the Louvre. (In 1680 the troupe at the Guénégaud merged again with the players from the Hôtel de Bourgogne forming the Comédie-Française.) Richelieu's theatre had been designed by Jacques Le Mercier and had opened in 1641, and unlike the huge theatre at the Tuileries Palace, which could accommodate 6,000 to 8,000 spectators, was of a size consistent with good acoustics. Lully greatly desired a better theatre and persuaded the king to let him use the one at the Palais-Royal free of charge. The theatre at the Palais-Royal had been altered in 1660 and 1671, but Lully, with 3,000 livres received from the king, had further changes made by Vigarani in 1674. The theatre had a total capacity of about 1,270 spectators: a parterre for 600 standing, amphitheatre seating for 120, and boxes with balconies accommodating another 550. The stage was 9.4 meters across and 17 meters deep, with space in front for the orchestra 7.6 meters across and 3 meters deep. 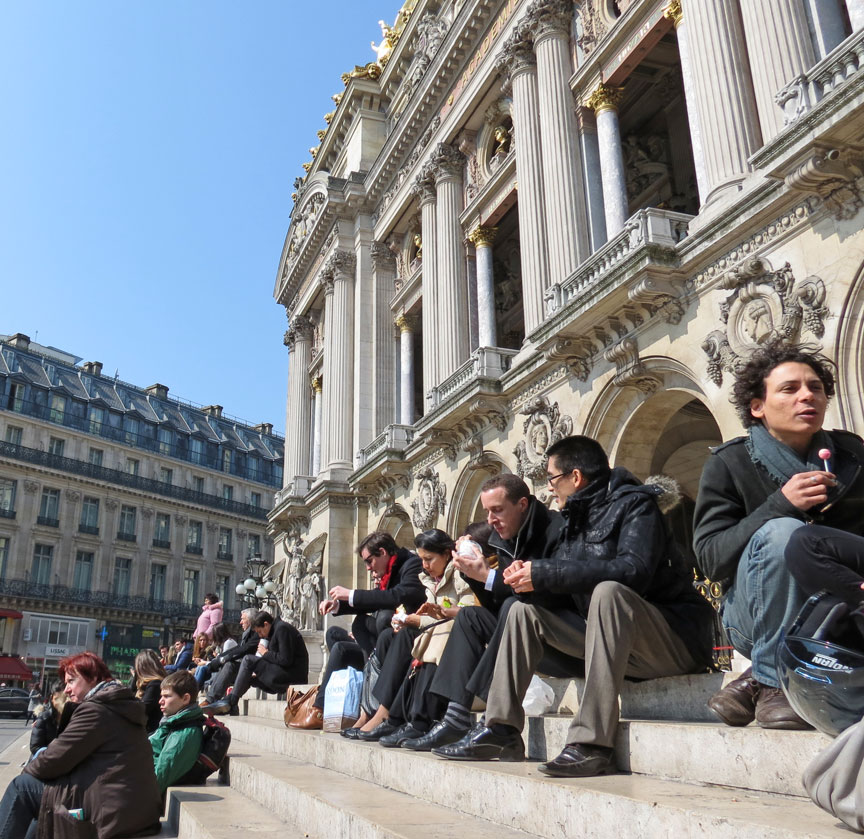 The first production in the new theatre was Alceste on 19 January 1674. The opera was bitterly attacked by those enraged at the restrictions that Lully had caused to be placed on the French and Italian comedians. To mitigate the damage, Louis XIV arranged for new works to be premiered at the court, usually at the Chateau Vieux of the Château de Saint-Germain-en-Laye. This had the further advantage of subsidizing the cost of rehearsals, as well as most of the machinery, sets, and costumes, which were donated to the Opéra for use in Paris. During Lully's time at the Opéra, performances were given all year, except for three weeks at Easter. Regular performances were on Tuesdays, Fridays, and Sundays. The premieres presented at court were usually during Carnival and were moved to the Palais-Royal after Easter, where the openings were on Thursdays. About two to three new works were mounted each year. In all, thirteen of Lully's tragédie en musique were performed. 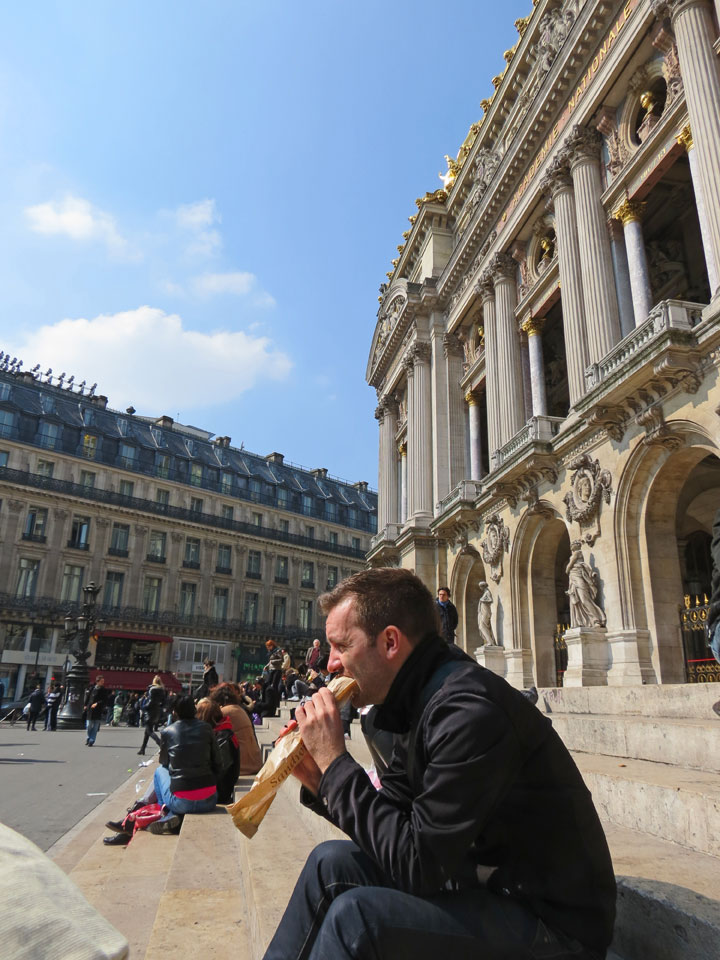 time for a sandwich 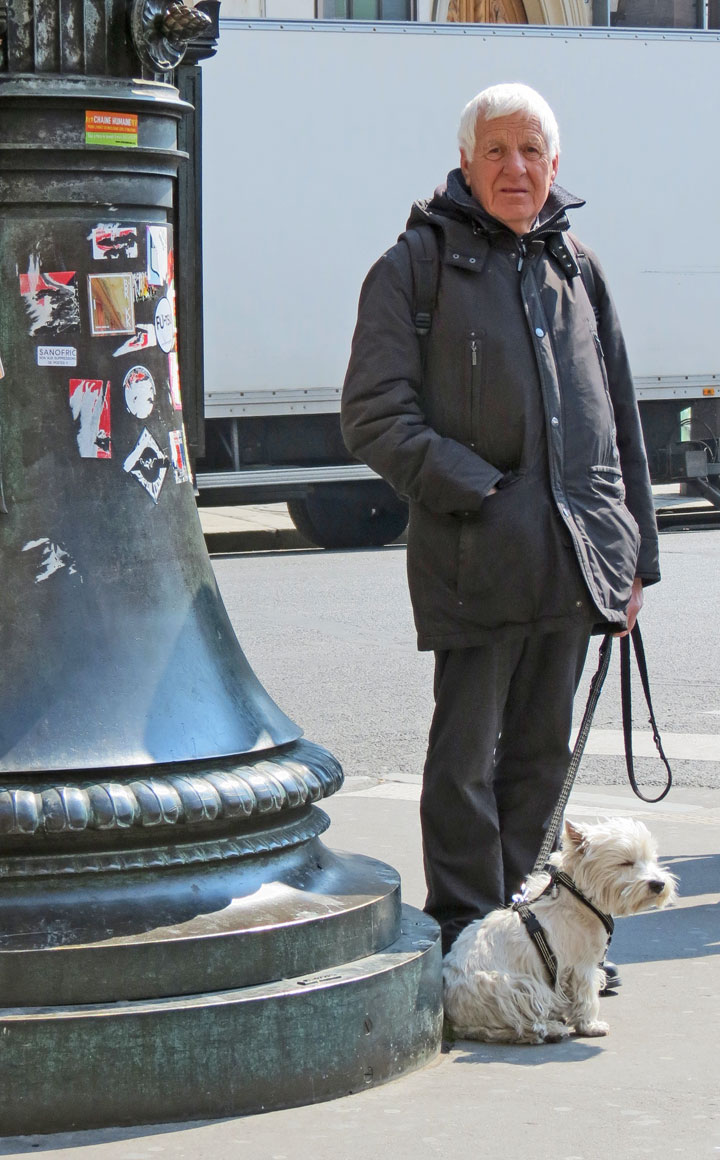 a place to meet 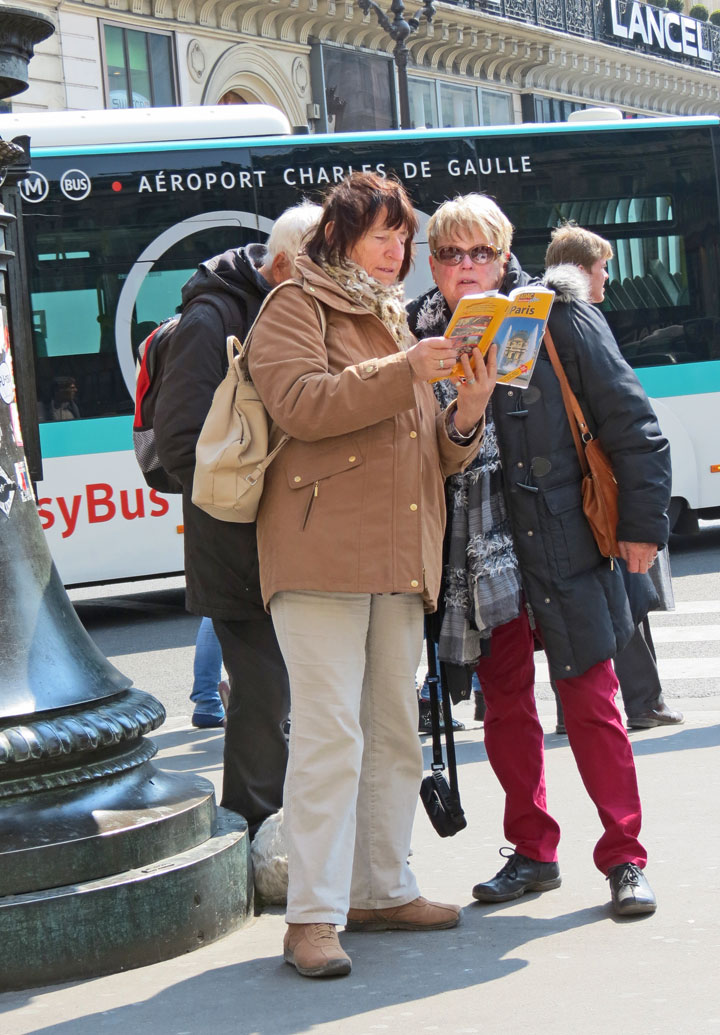 to plan your day 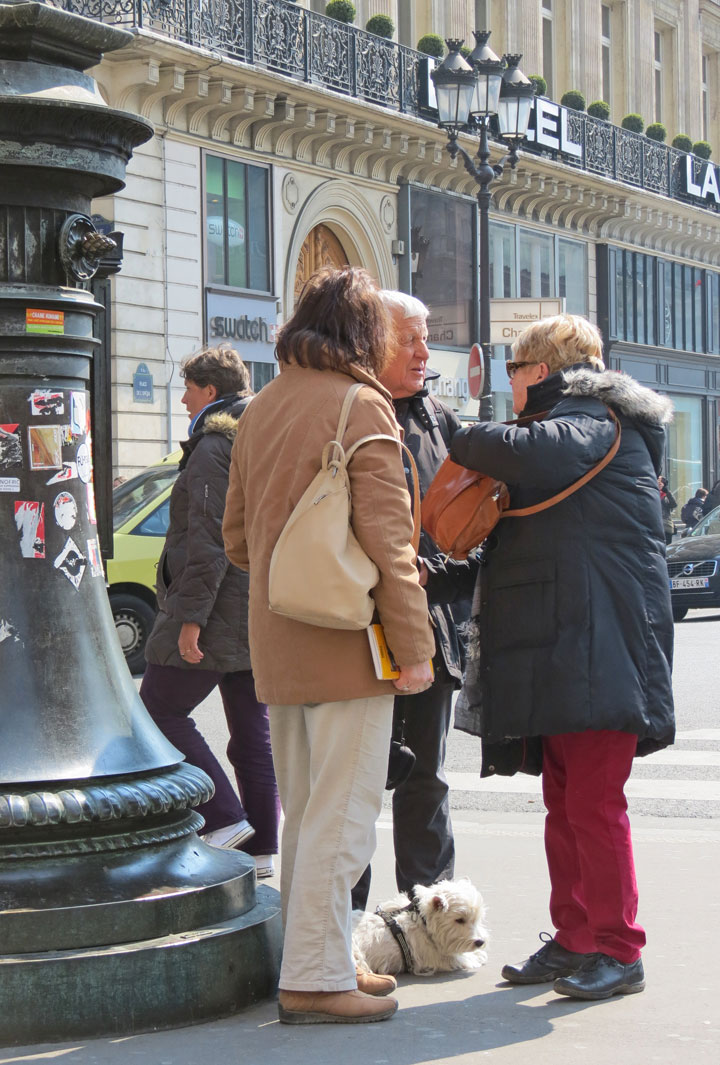 as the dog rests 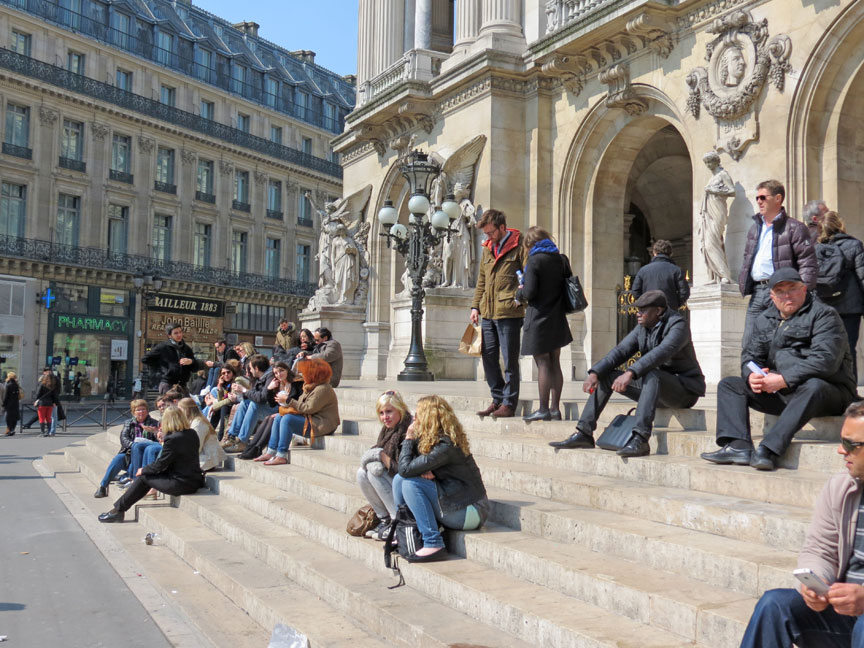 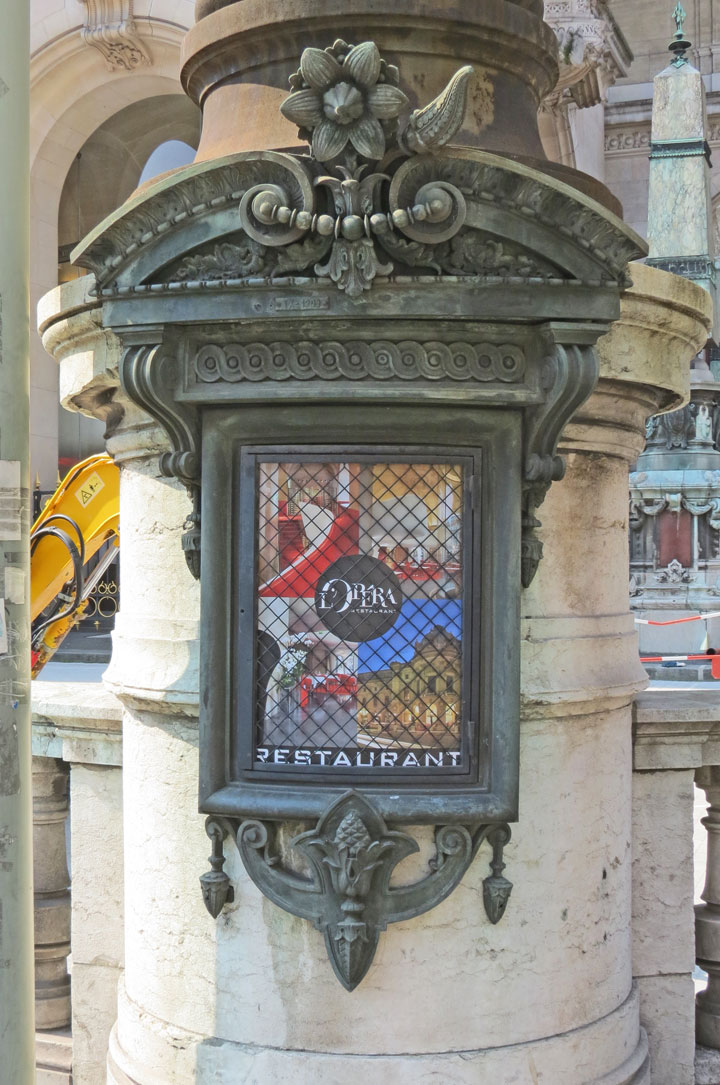 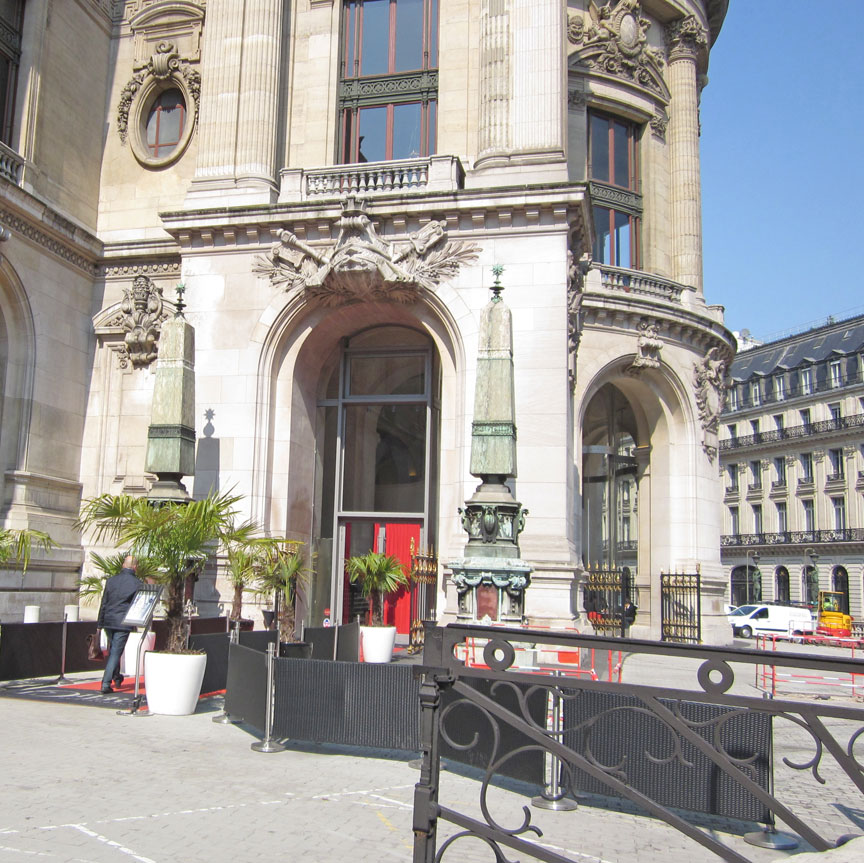 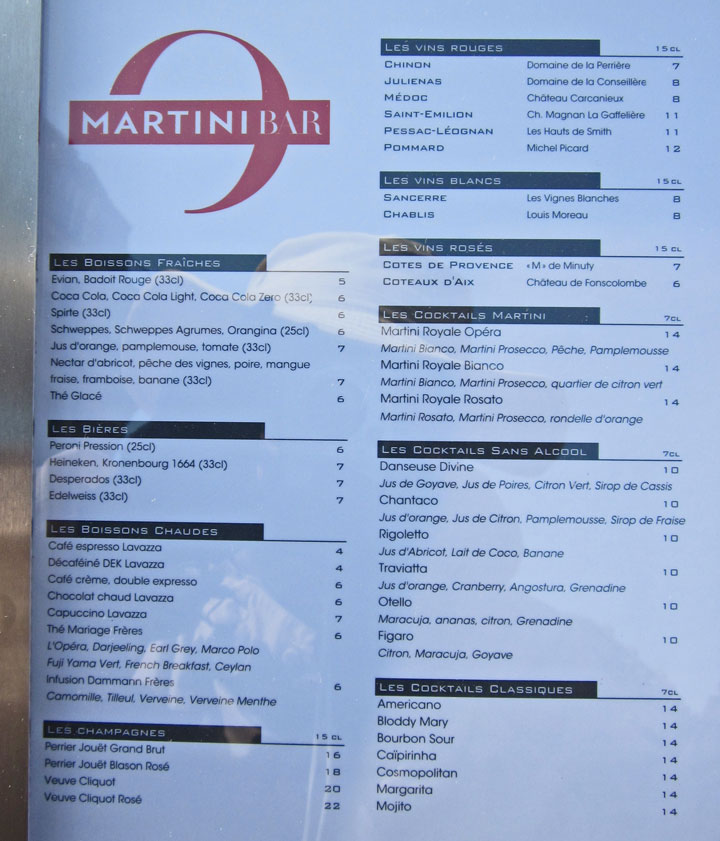 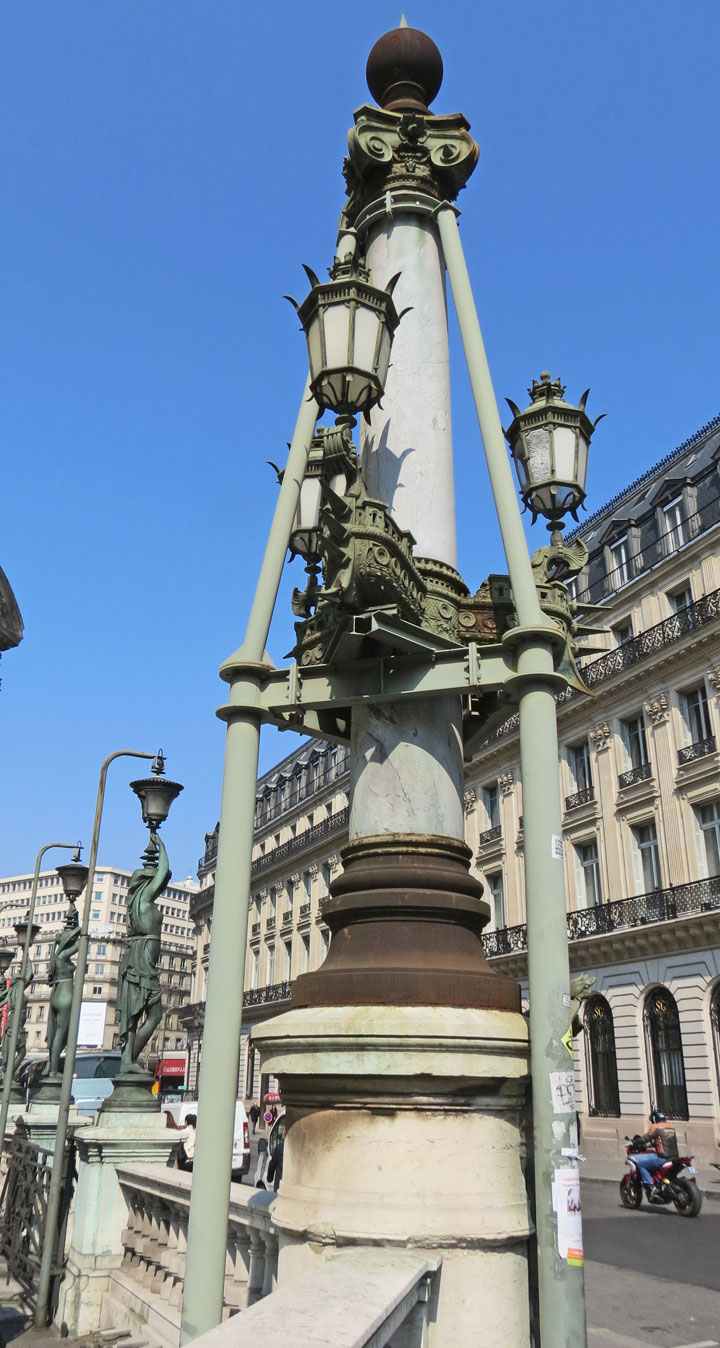 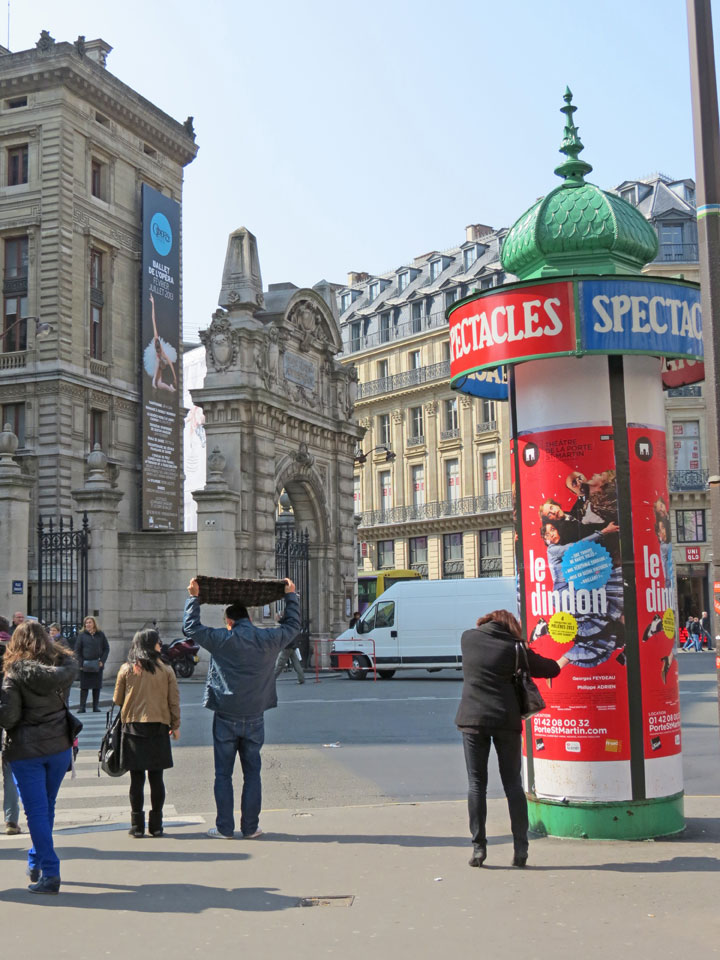