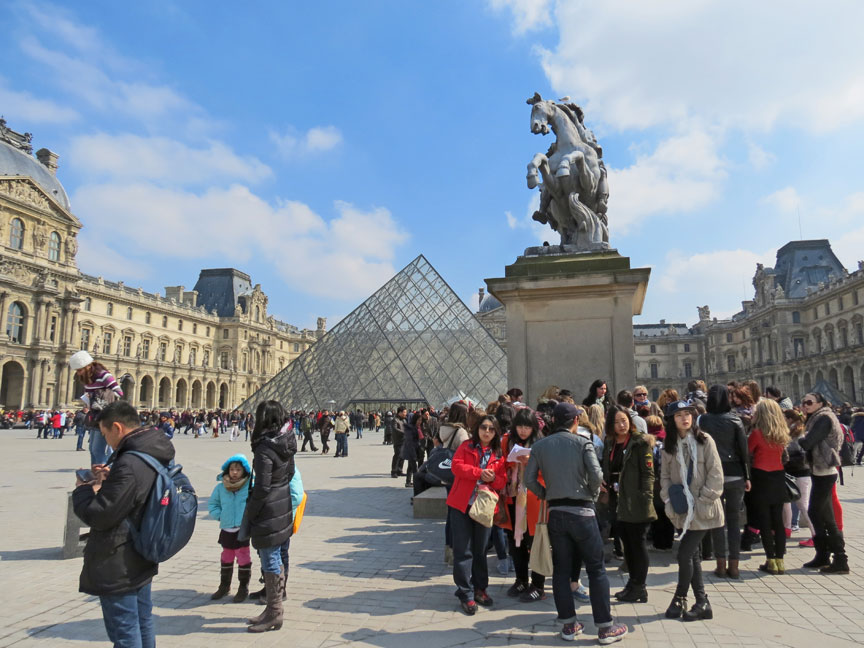 The Louvre, showing the Pyramid Entrance 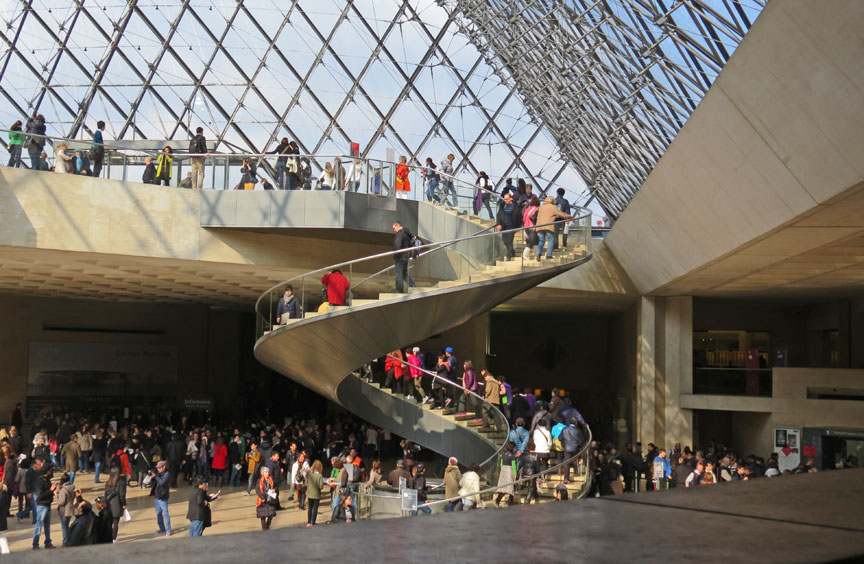 The Musée du Louvre in English, the Louvre Museum or simply The Louvre—is one of the world's largest museums, and a historic monument. A central landmark of Paris, France, it is located on the Right Bank of the Seine in the 1st arrondissement (district). Nearly 35,000 objects from prehistory to the 21st century are exhibited over an area of 60,600 square meters (652,300 square feet). With more than 8 million visitors each year, the Louvre is the world's most visited museum. 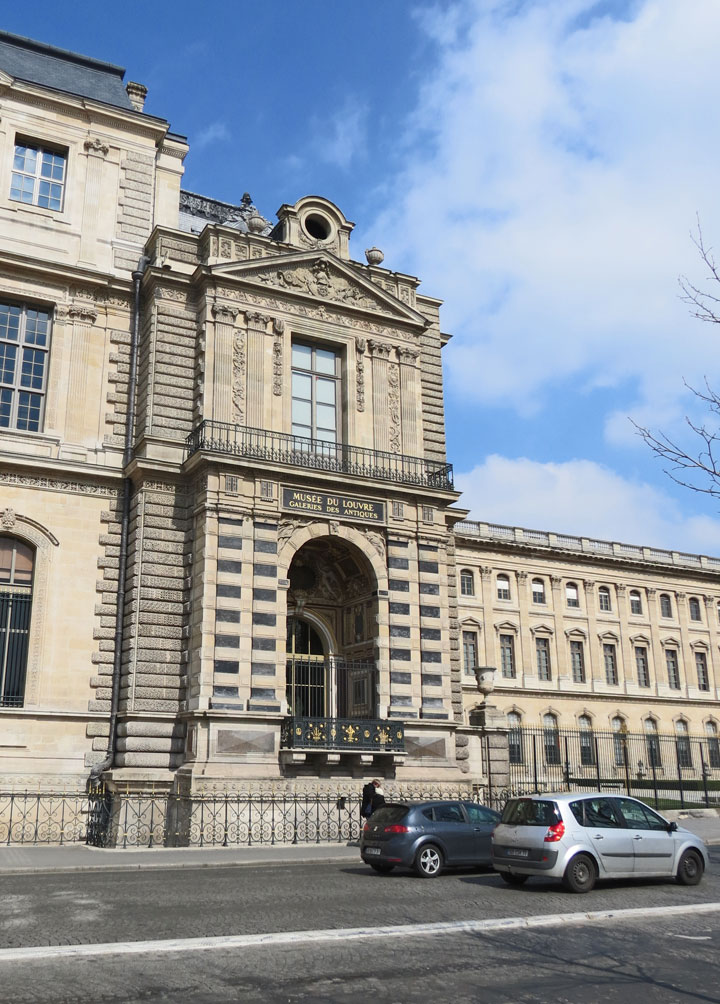 The museum is housed in the Louvre Palace (Palais du Louvre) which began as a fortress built in the late 12th century under Philip II. Remnants of the fortress are visible in the basement of the museum. The building was extended many times to form the present Louvre Palace. In 1682, Louis XIV chose the Palace of Versailles for his household, leaving the Louvre primarily as a place to display the royal collection, including, from 1692, a collection of antique sculpture. In 1692, the building was occupied by the Académie des Inscriptions et Belles Lettres and the Académie Royale de Peinture et de Sculpture, which in 1699 held the first of a series of salons. The Académie remained at the Louvre for 100 years. During the French Revolution, the National Assembly decreed that the Louvre should be used as a museum, to display the nation's masterpieces. 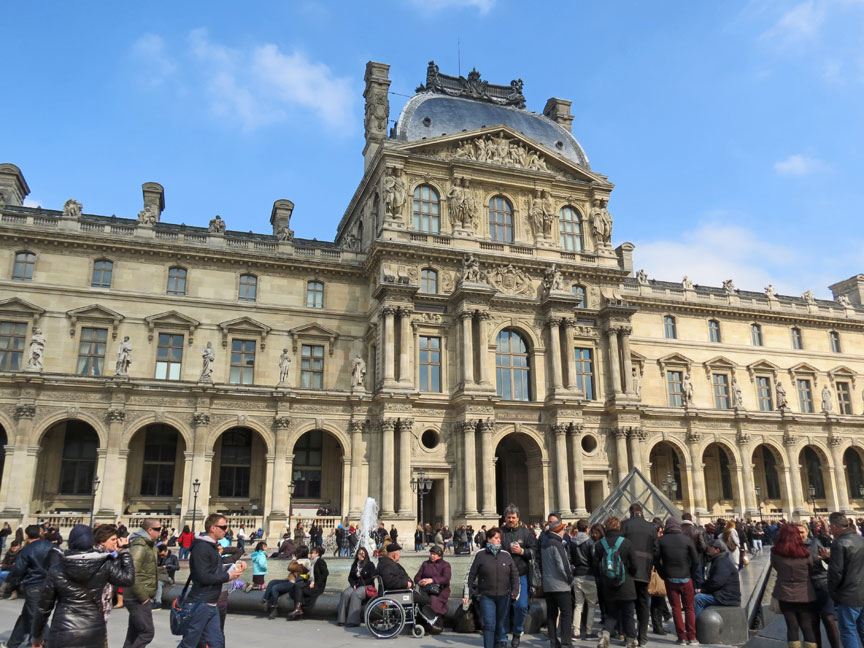 The museum opened on 10 August 1793 with an exhibition of 537 paintings, the majority of the works being royal and confiscated church property. Because of structural problems with the building, the museum was closed in 1796 until 1801. The size of the collection increased under Napoleon and the museum was renamed the Musée Napoléon. After the defeat of Napoleon at Waterloo, many works seized by his armies were returned to their original owners. The collection was further increased during the reigns of Louis XVIII and Charles X, and during the Second French Empire the museum gained 20,000 pieces. Holdings have grown steadily through donations and gifts since the Third Republic. As of 2008, the collection is divided among eight curatorial departments: Egyptian Antiquities; Near Eastern Antiquities; Greek, Etruscan, and Roman Antiquities; Islamic Art; Sculpture; Decorative Arts; Paintings; Prints and Drawings. 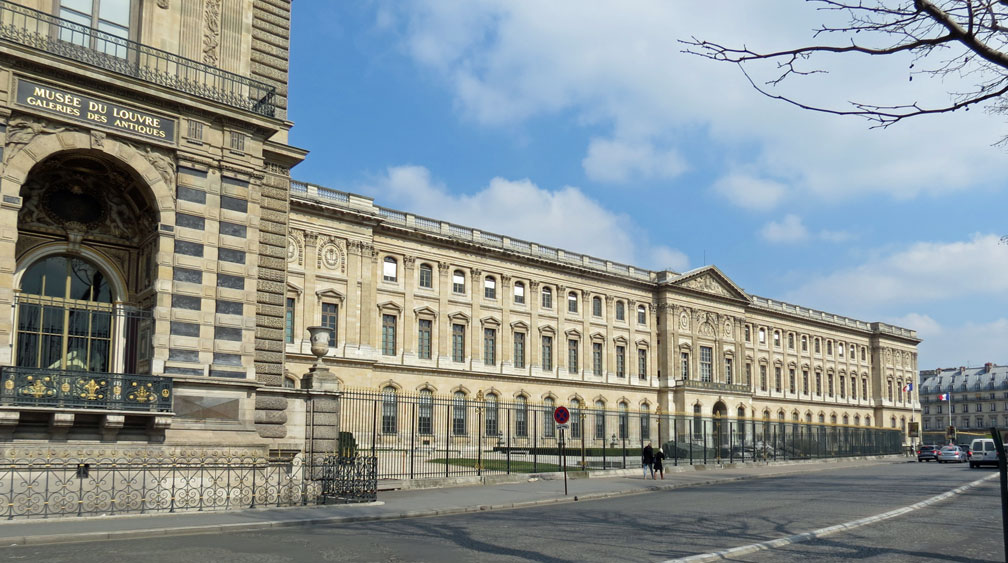 The Louvre Palace (Palais du Louvre) which houses the museum was begun as a fortress by Philip II in the 12th century, with remnants of this building still visible in the crypt. Whether this was the first building on that spot is not known; it is possible that Philip modified an existing tower. Although some believe that the word 'louvre' may refer to the structure's status as the largest in late 12th century Paris (from the French L'Œuvre, masterpiece) – or to its location in a forest (from the French rouvre, oak) – one finds in the authoritative Larousse that it derives from an association with wolf hunting den (via Latin: lupus, lower Empire: lupara). In the 7th century, St. Fare, an abbess in Meaux, left part of her "Villa called Luvra situated in the region of Paris" to a monastery.; this territory probably did not correspond exactly to the modern site, however. 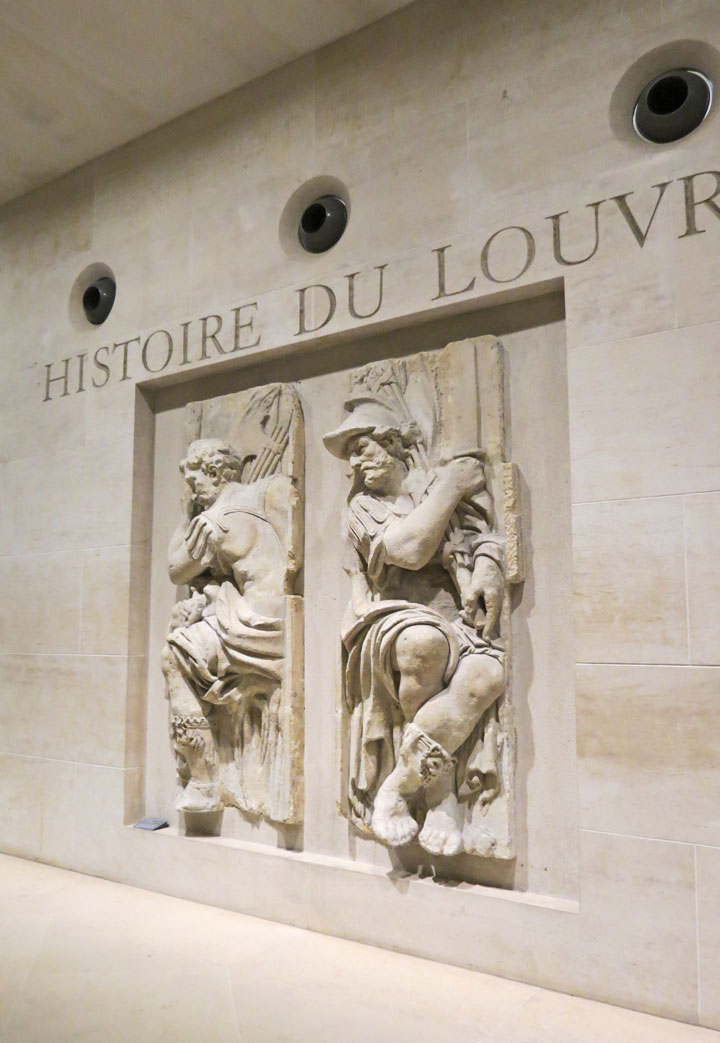 The Louvre Palace was altered frequently throughout the Middle Ages. In the 14th century, Charles V converted the building into a residence and in 1546, Francis I (François 1er ) renovated the site in French Renaissance style. Francis acquired what would become the nucleus of the Louvre's holdings, his acquisitions including Leonardo da Vinci's Mona Lisa. After Louis XIV chose Versailles as his residence in 1682, constructions slowed; however, the move permitted the Louvre to be used as a residence for artists.

By the mid-18th century there was an increasing number of proposals to create a public gallery, with the art critic La Font de Saint-Yenne publishing, in 1747, a call for a display of the royal collection'. On 14 October 1750, Louis XV agreed and sanctioned a display of 96 pieces from the royal collection, mounted in the Galerie royale de peinture of the Luxembourg Palace. A hall was opened by Le Normant de Tournehem and the Marquis de Marigny for public viewing of the Tableaux du Roy on Wednesdays and Saturdays, and contained Andrea del Sarto's Charity and works by Raphael; Titian; Veronese; Rembrandt; Poussin or Van Dyck, until its closing in 1780 as a result of the gift of the palace to the comte de Provence by the king in 1778. Under Louis XVI, the royal museum idea became policy. The comte d'Angiviller broadened the collection and in 1776 proposed conversion of the Grande Galerie of the Louvre – which contained maps – into the "French Museum". Many proposals were offered for the Louvre's renovation into a museum, however none was agreed on. Hence the museum remained incomplete until the French Revolution. 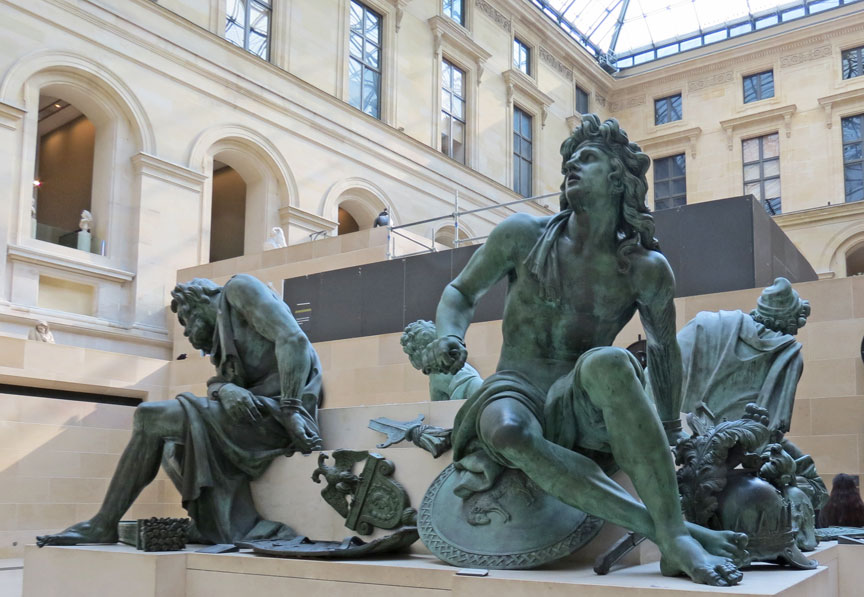 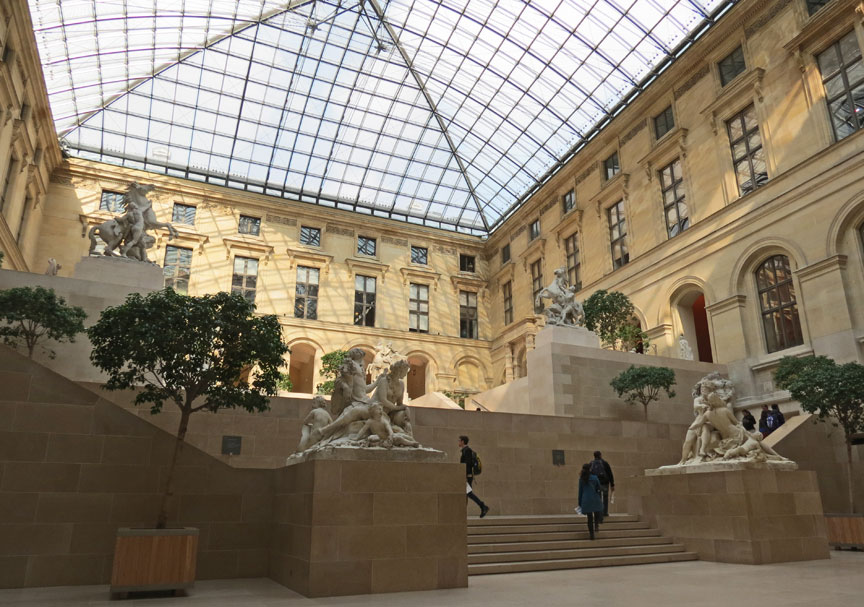 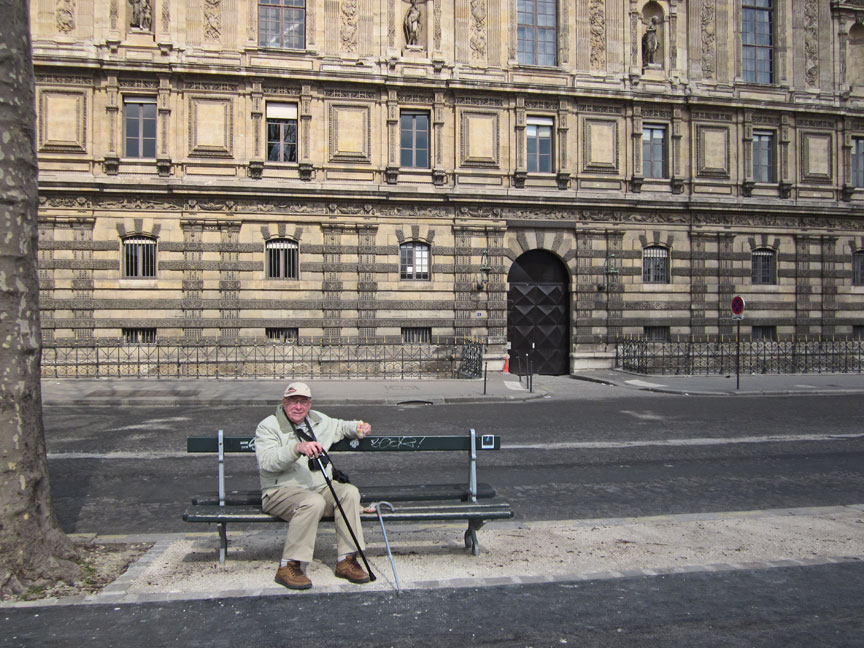 "The Traveler" resting after a day visiting the Louvre