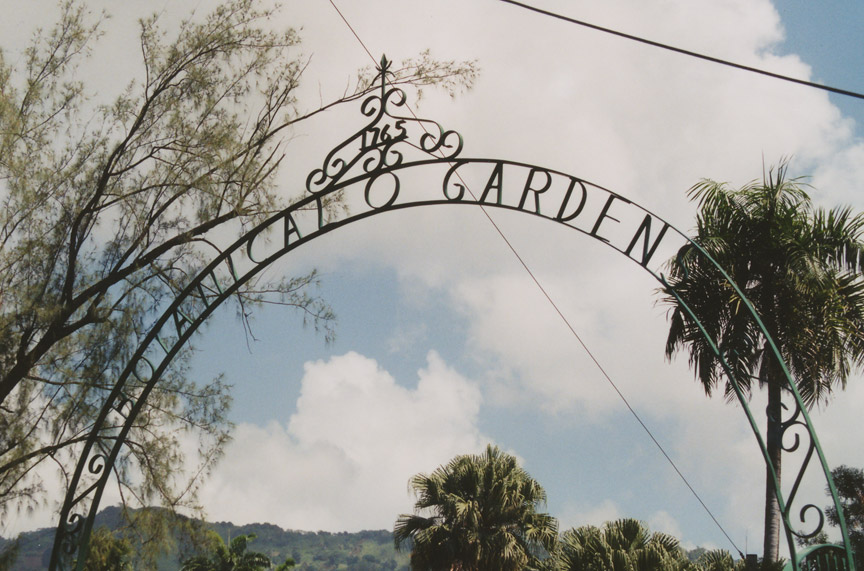 The St Vincent Botanical Gardens, are one of the oldest in the Western Hemisphere (preceded only by Bartram's Garden in Philadelphia) and perhaps the oldest in the tropical world. Conservation of rare species of plants has been practiced here since 1765. The Nicholas Wildlife Aviary complex located within the Gardens also maintains a captive breeding program to conserve the vulnerable St Vincent Parrot. 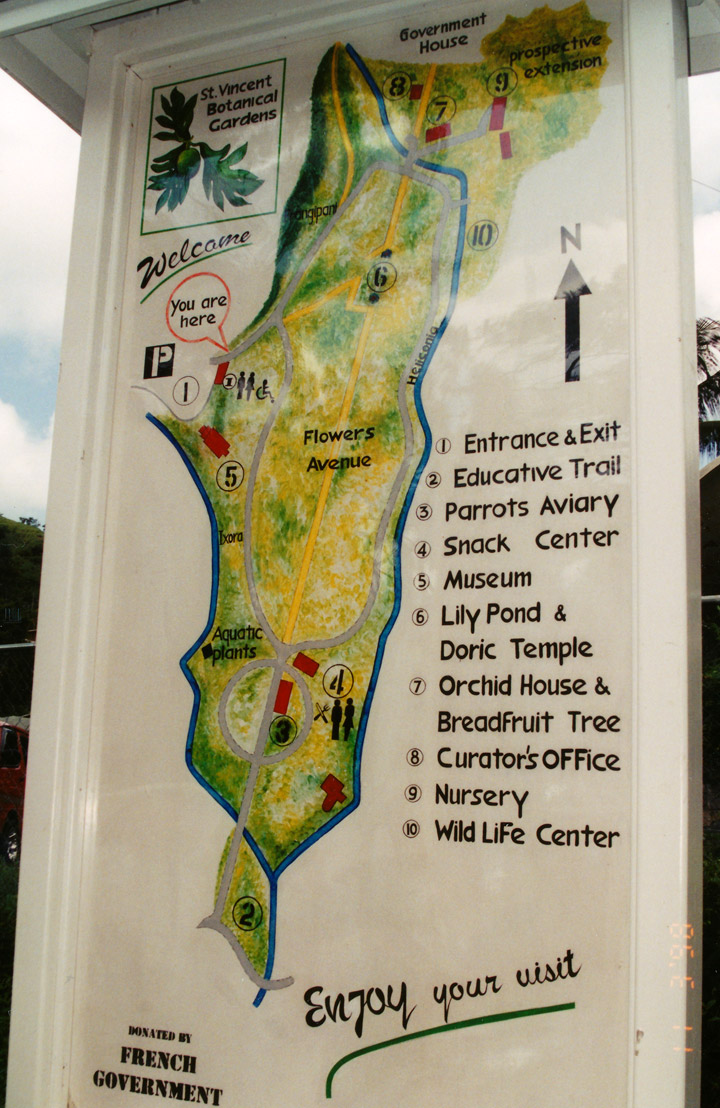 The magnificent Botanic Gardens offer an attractive, alluring and peaceful retreat and are currently one of the most visited sites in St Vincent & the Grenadines. It is a venue for weddings, photographing, family celebrations, studying and other special events, hence fostering a sense of public ownership and increased appreciation of the Gardens’ historic and cultural significance. An historic landmark of major national, regional and global significance, the Botanic Gardens occupies approximately 20 acres about one mile out of capital, Kingstown along the Leeward Highway. 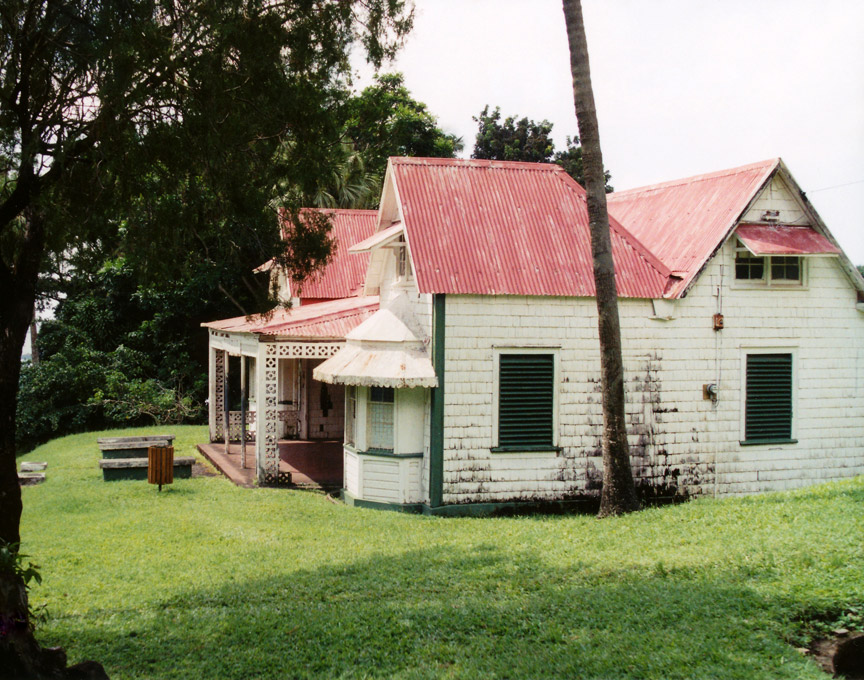 The Nicholas Wildlife Aviary Complex, located within the Gardens, maintains a captive breeding program to conserve the vulnerable St Vincent Parrot, “Amazona guildingii”, the National Bird. These endemic parrots can be found in the wild and also in the Aviary. 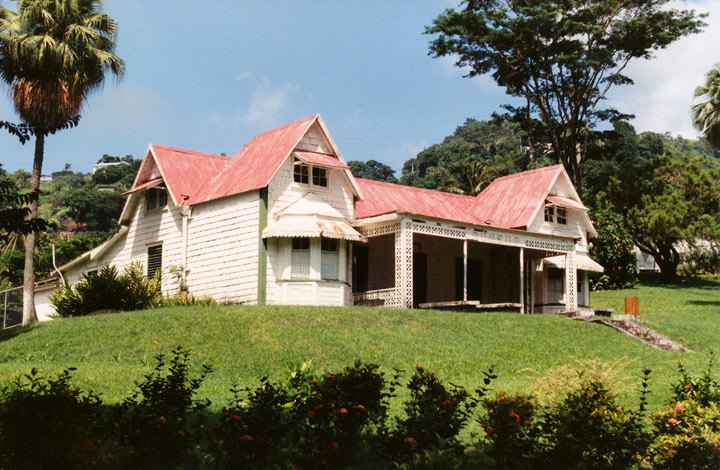 Following the Peace of Paris in (1763) the newly appointed governor of the southern British Caribbean islands, Robert Melville, and the military surgeon in St. Vincent, George Young, decided to create a botanic garden, primarily to provide medicinal plants for the military and improve the life and economy of the colony. In the early 18th century great emphasis had been laid on introducing valuable and commercial plants from the East Indies to Kew Gardens in England to be sent later to the American tropics. The Royal Society fostered the introduction, establishment, and dissemination of highly prized species. 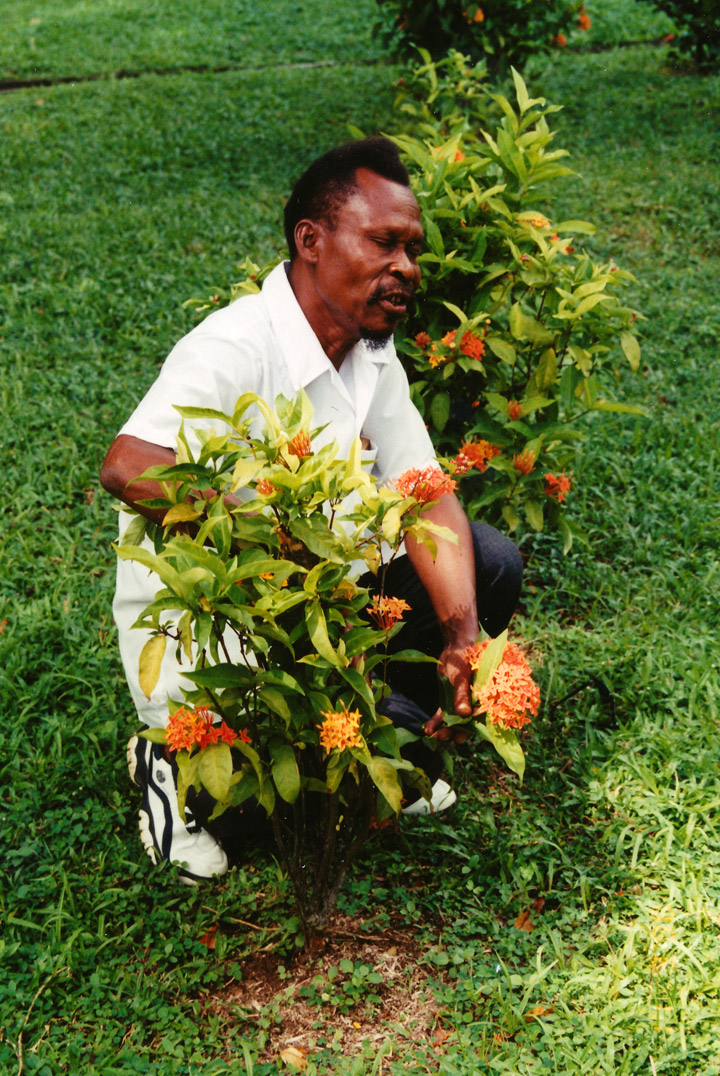 Melville, anticipating modern ethnobotany, urged that "physical practitioners of the country, natives of experience, and even old Caribs and slaves who have dealt in cures might be worth taking notice of, and if at any time you should think that a secret may be got at or even an improvement for small expense, I shall readily pay for it." The War Department (UK) and the Honourable East India Company sent seeds and plants from tropical India and from British North Borneo, Sabah, and Sarawak in the East Indies. Other species came from French and Caribbean sources, such as cinnamon from Guadeloupe and Grenada. From Kew Gardens came seeds from China. 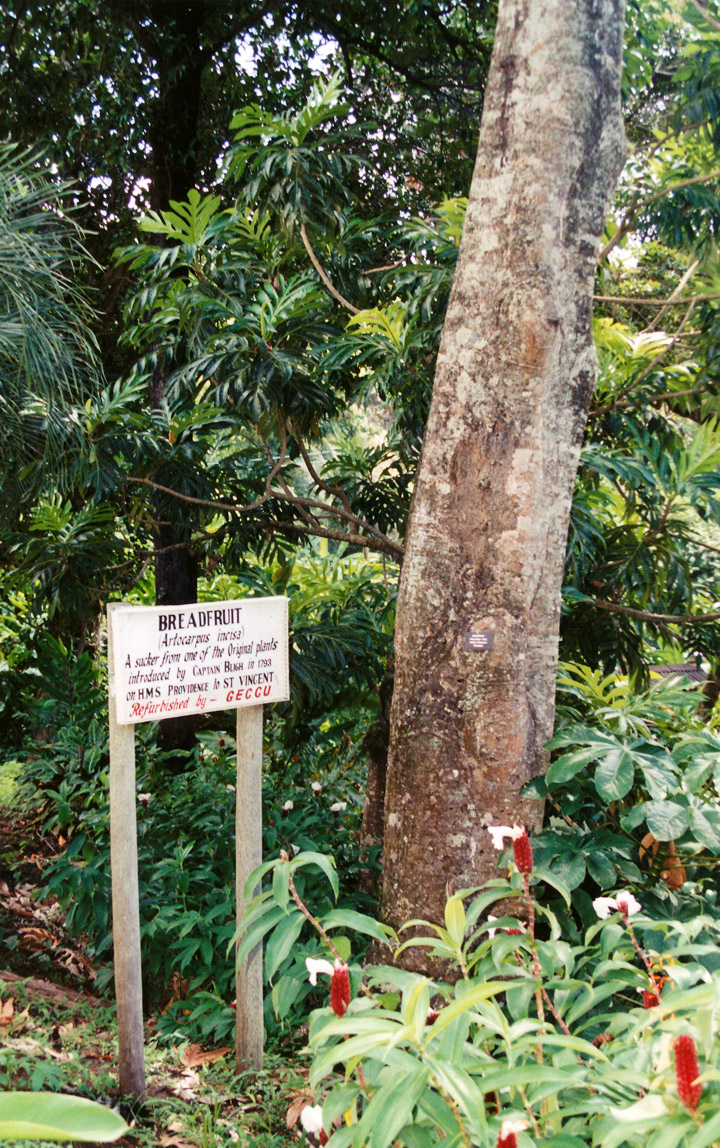 Under the capable and enthusiastic guidance of Young and several successive curators, both British and French, the Botanical Gardens quickly attained an enviable reputation and received wide acclaim. It was a great time for the exchange of valuable plants in the Caribbean, from French Guiana to Jamaica. 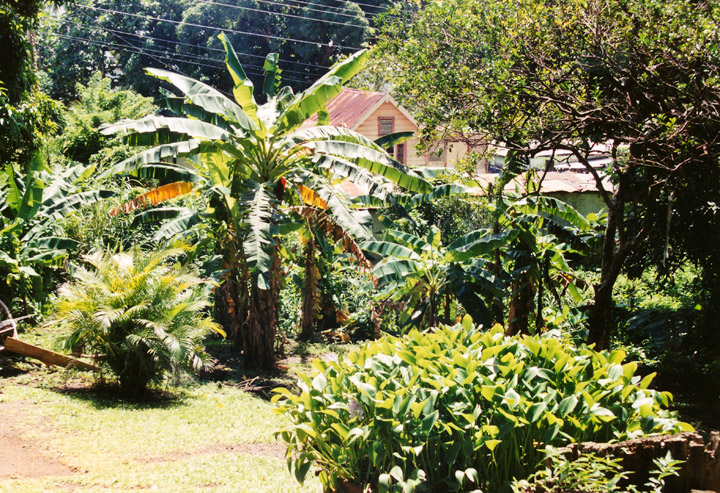 Among the wide variety of tropical trees and shrubs is a third generation breadfruit tree, a sucker from the original plant brought by Captain William Bligh (of Bounty fame) in 1793. In 1787-88 Captain Bligh made his ill-fated voyage on HMAV Bounty to Tahiti to collect breadfruit and other useful plants for the West Indies. Undaunted by the notorious mutiny of his first crew, Bligh again set sail for Tahiti aboard HMS Providence. He completed his mission in Kingstown, St. Vincent on January 23rd 1793 with plants from the South Seas. The Botanic Garden's Curator took great care of these plants, and the success of all those efforts is evident from the widespread distribution of breadfruit, the most useful food plant throughout the West Indies. 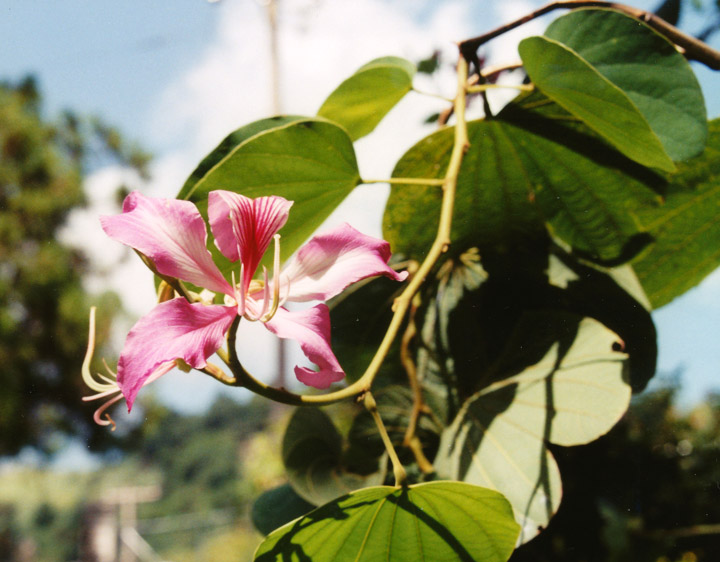 The first half of the 19th Century was a lean time for colonial botanic gardens. By 1850, due to a lack of interest and maintenance, the St Vincent gardens had fallen into disrepair. Local efforts in St Vincent initiated in 1884 began to revive the gardens; by 1890 the work was reactivated as part of a larger agricultural and botanical scheme. 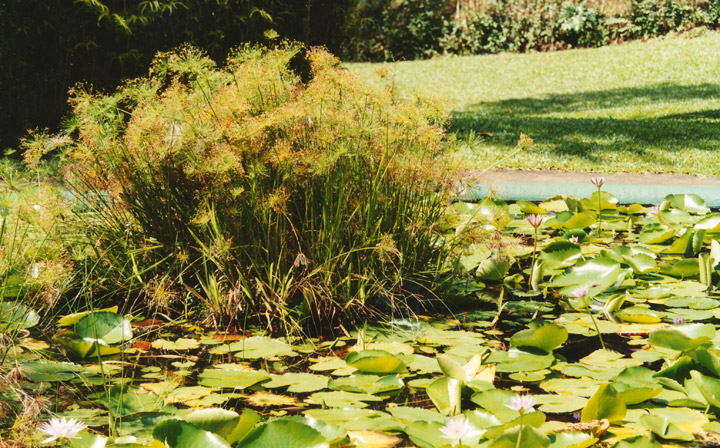 The Botanical Gardens soon regained their former glory and beauty, and the plant collections were recovered. Considerable attention was given to experimental work in the gardens on economic crops until 1944 (cotton, arrowroot, cacao and sugarcane). The layout of the re-established Gardens was improved by the construction of a small Doric Temple, by road building and by the continuous introduction of plants to maintain and add to the collection. After 240 years the Botanical Gardens today remain a beautiful tranquil link with Saint Vincent and the Grenadines’ history. 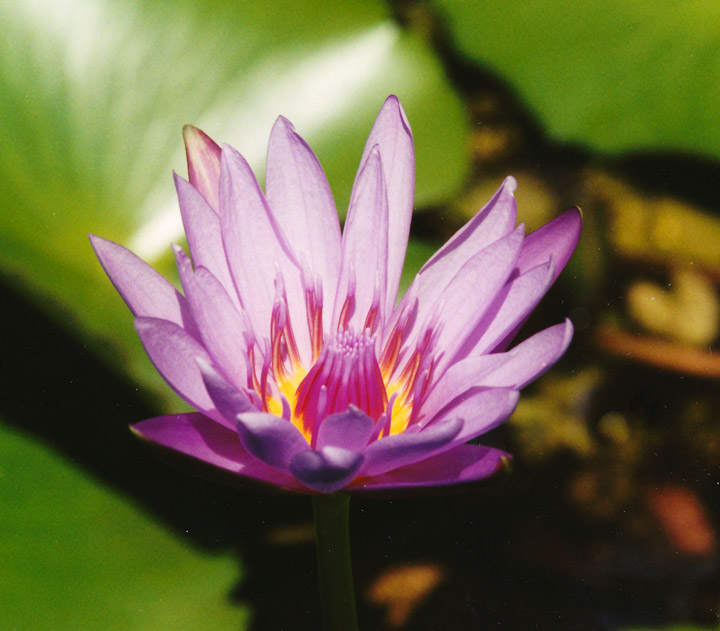 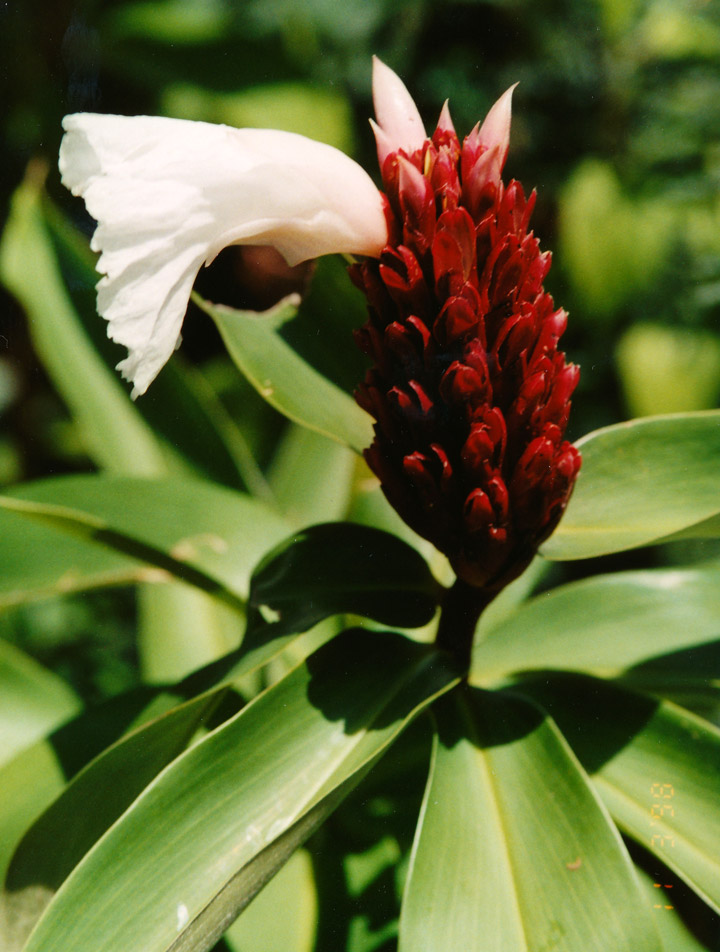 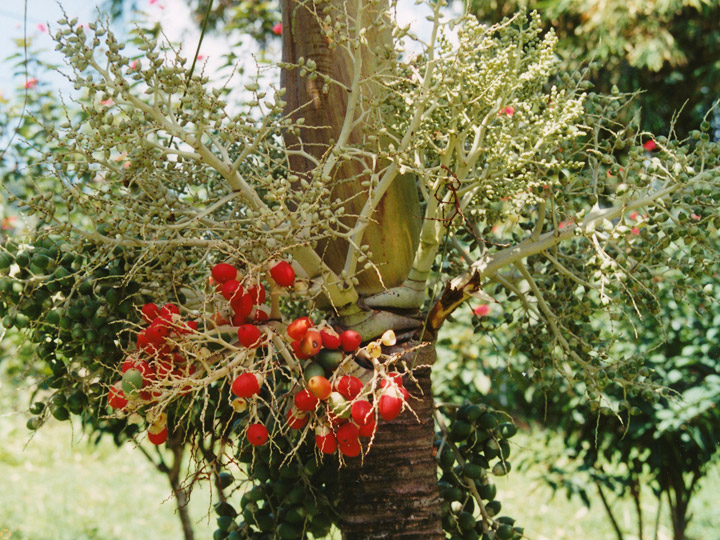 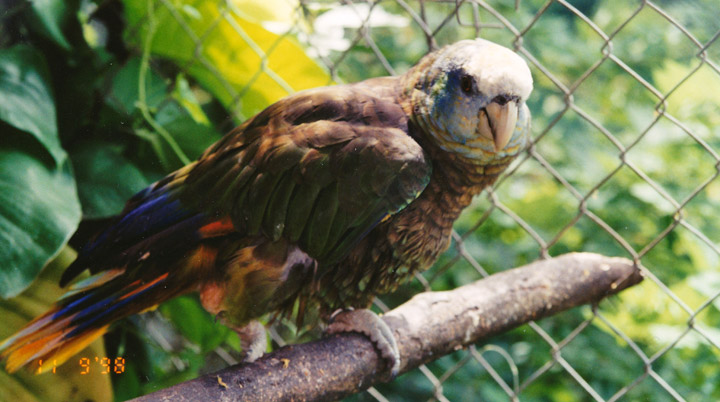 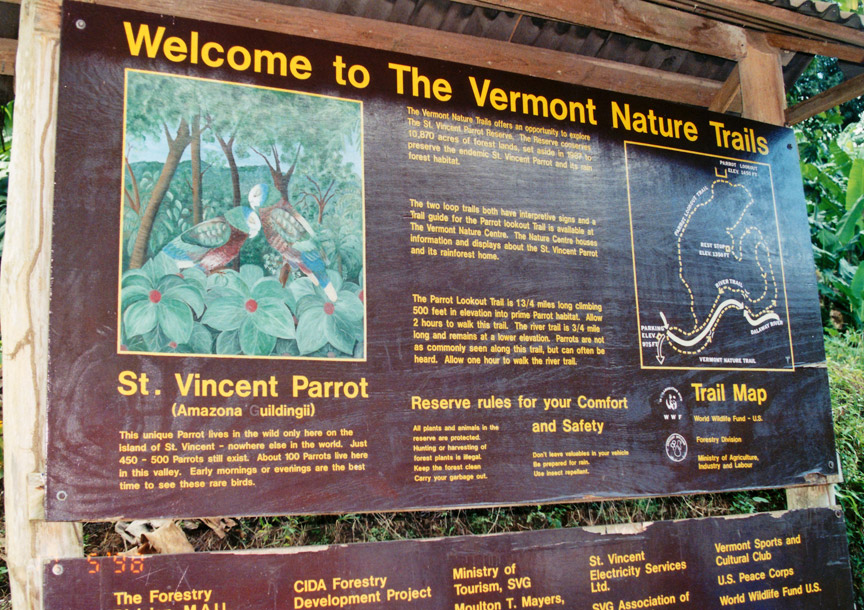 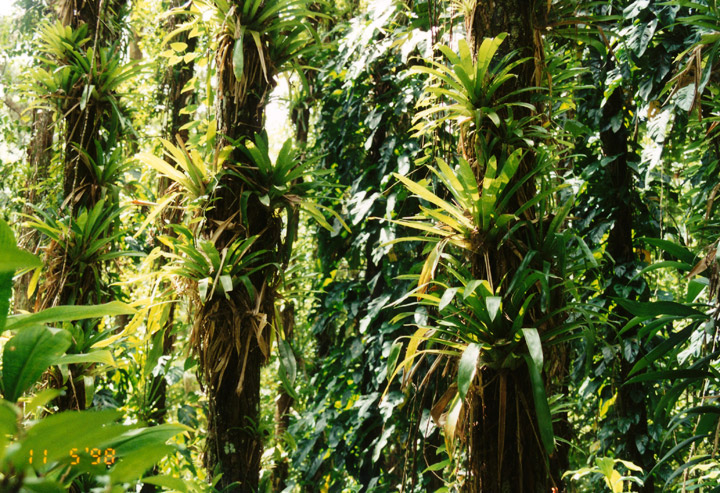 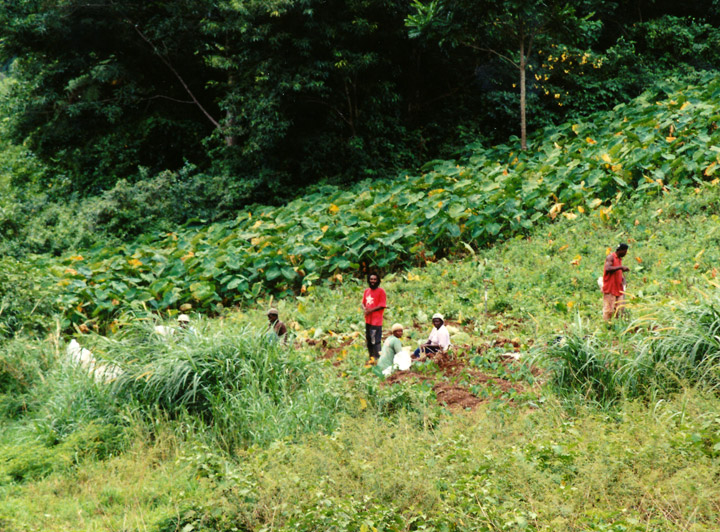 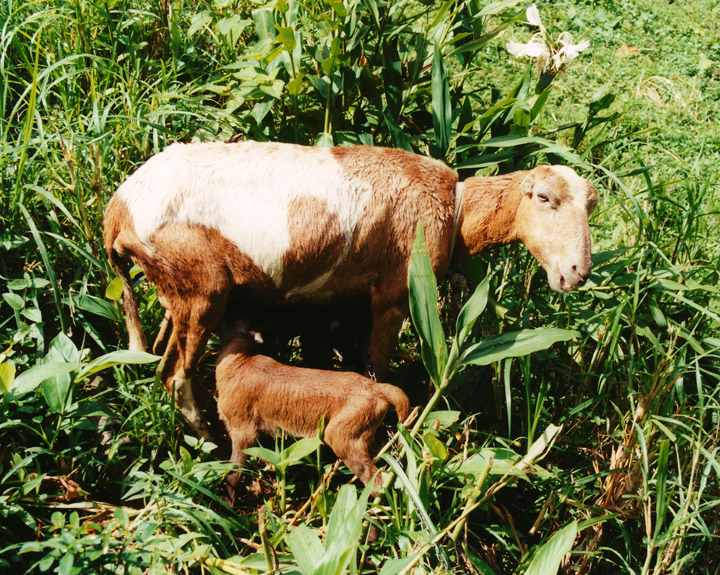 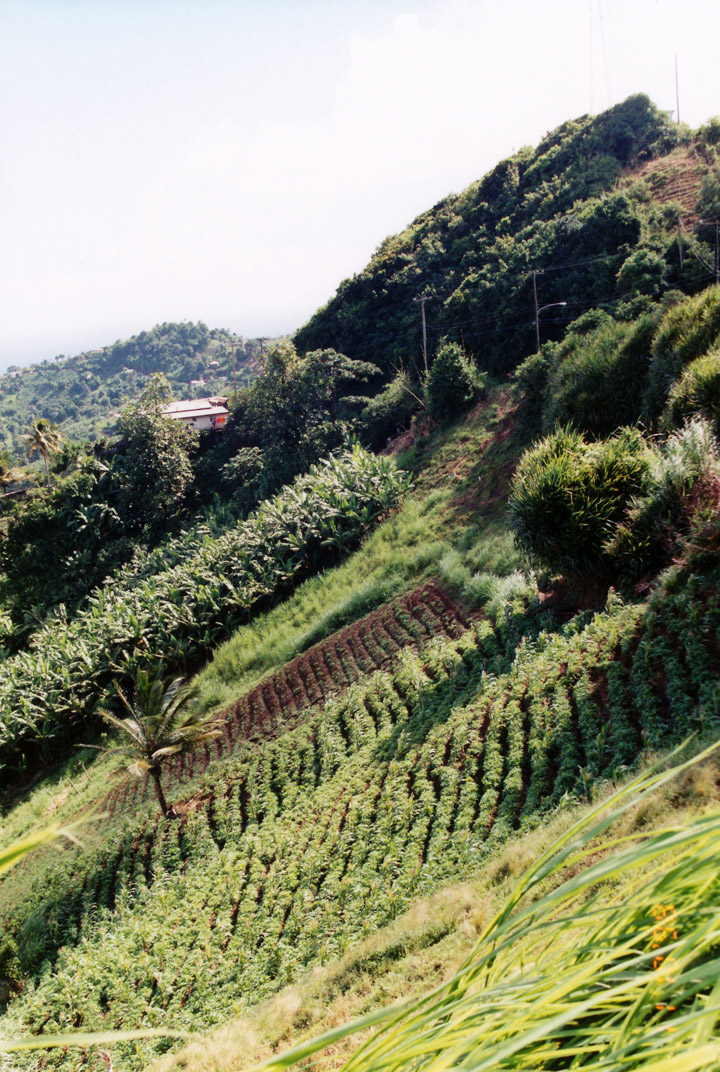 creating agriculture on the hillside 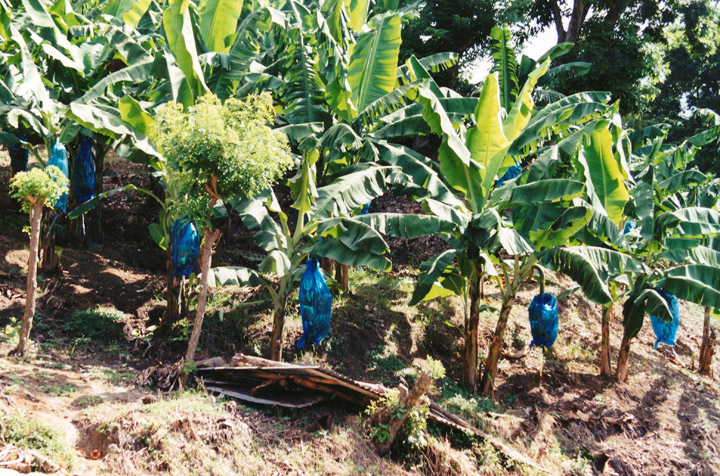 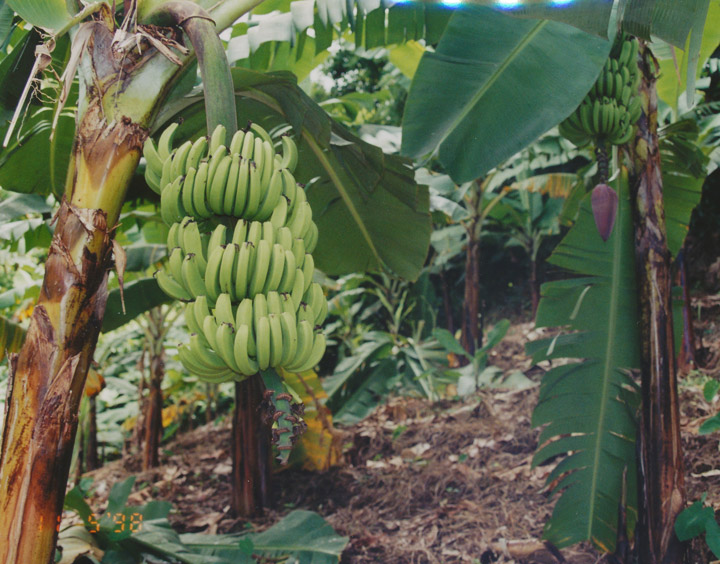 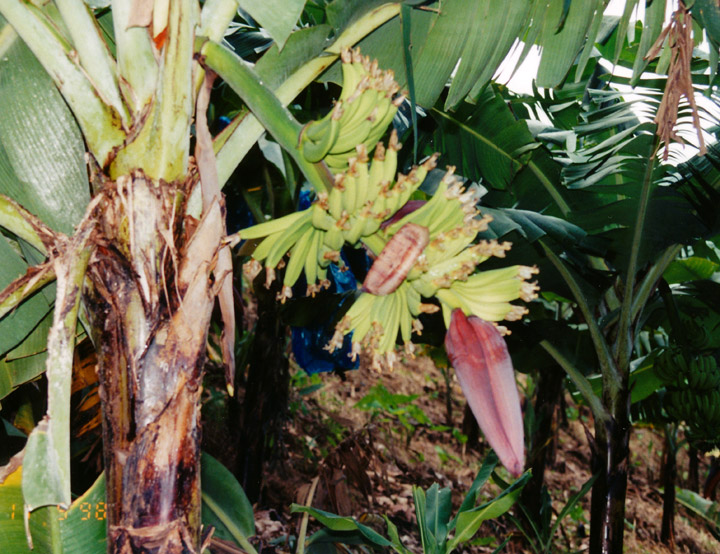 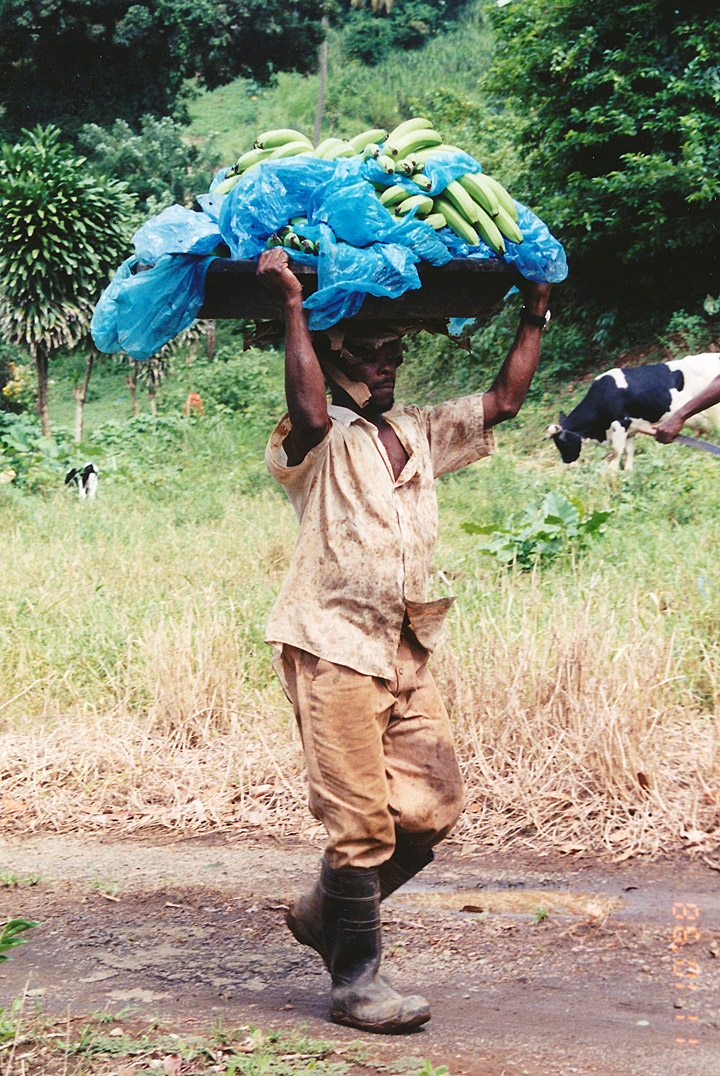 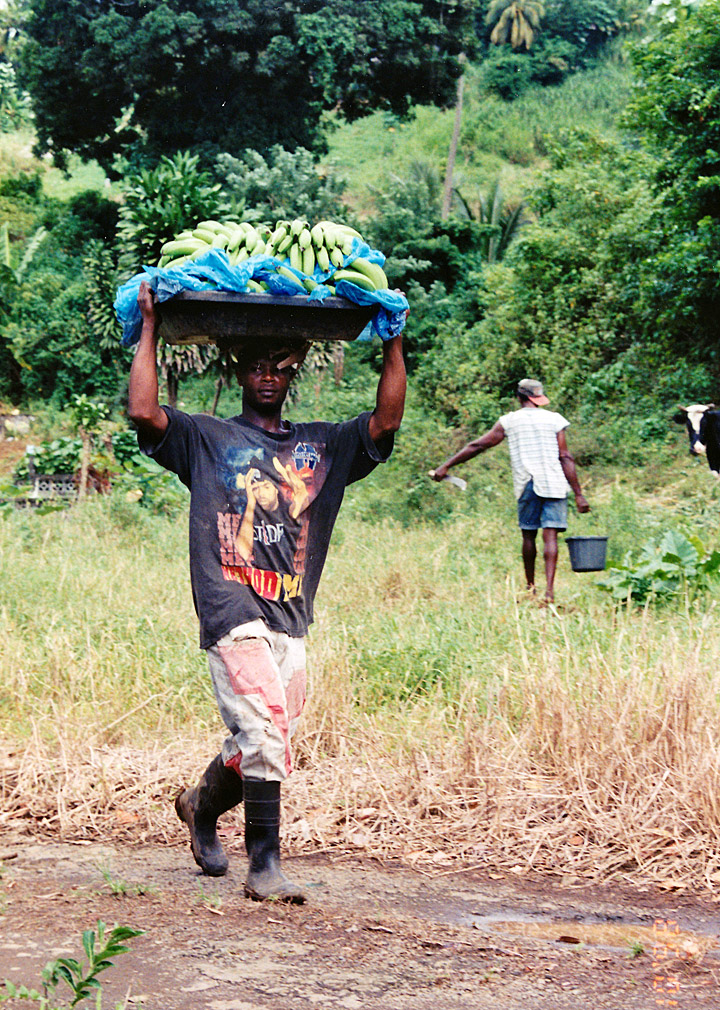 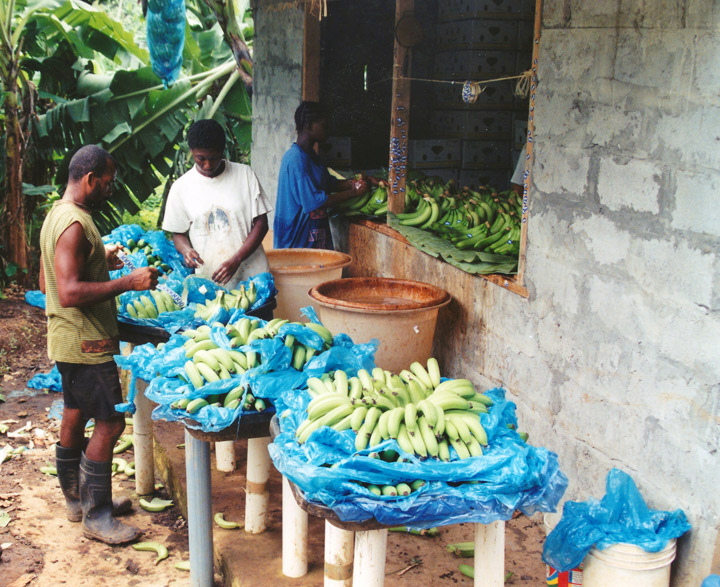 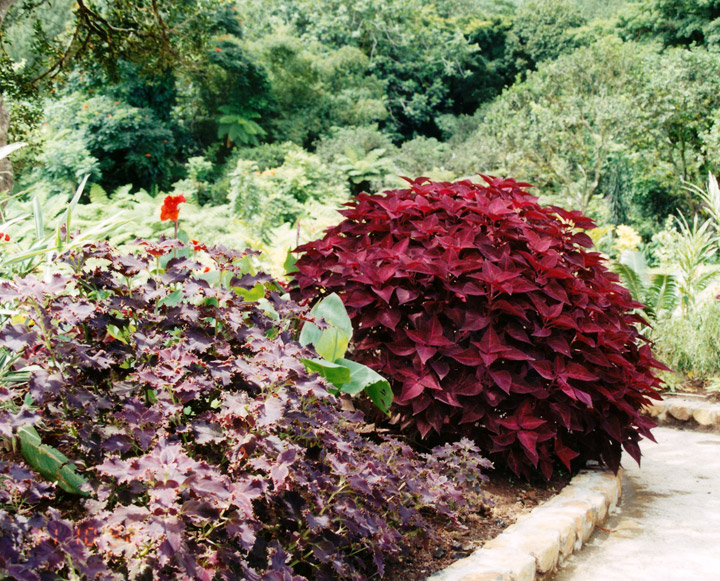 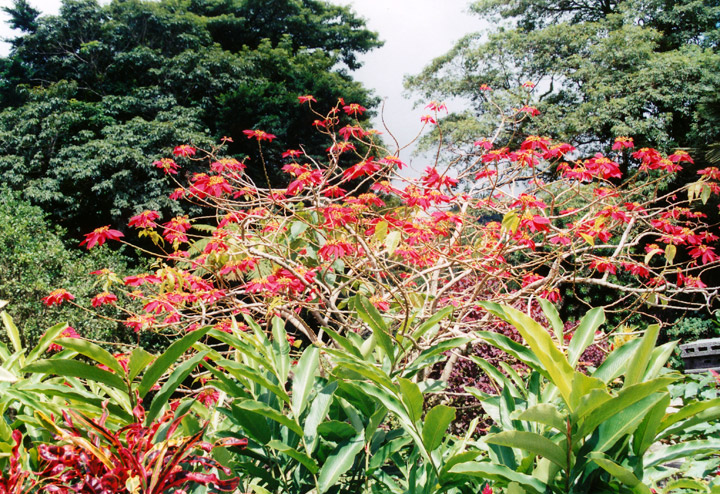 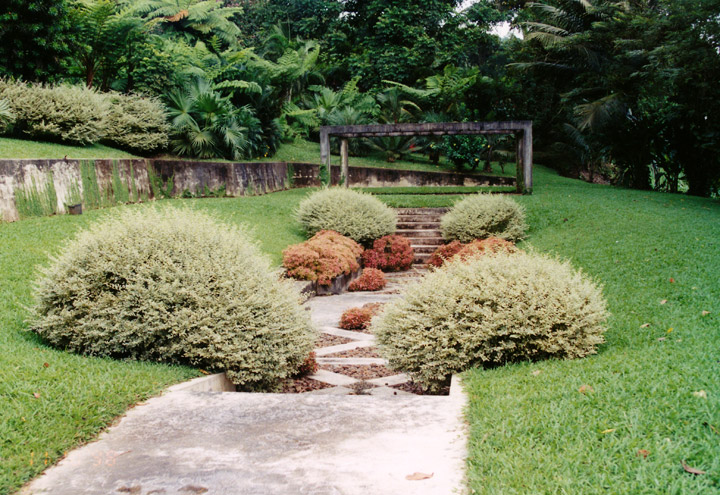