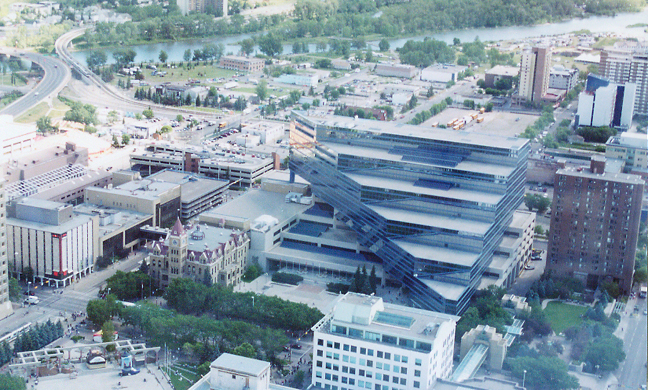 city Hall
(the old and the new)

Calgary, city on the Bow River in southern Alberta, Canada, at the entrance to a major route across the Rocky Mountains. Calgary is known as the Energy Capital of Canada because a number of oil companies have headquarters in the city. It is one of the country's most important business centers. The surrounding region produces wheat, beef cattle, and natural gas, while the nearby mountains draw many tourists. The mountains also cause Calgary's climate to be rather dry. It has only 399 mm (15.7 in) of precipitation per year. Summers are pleasantly mild, with an average daily July temperature range from 10° to 23° C (49° to 74° F). Winters are long and cold, with an average daily January temperature range from -16° to -4° C (4° to 26° F), but are relieved by frequent warm winds called chinooks. 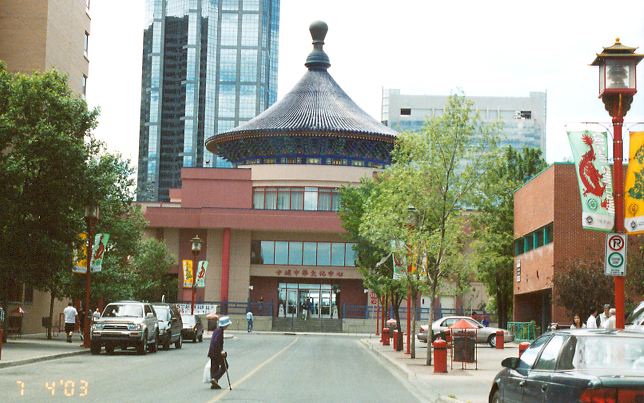 Calgary has the most striking setting of all of Canada's prairie cities. It lies at the very edge of the high plains, where they rise into the foothills of the Rocky Mountains, on a site deeply carved by the Bow and Elbow rivers. The city proper covers a land area of 717 sq km (277 sq mi), and the entire metropolitan area has a land area of 5083 sq km (1963 sq mi).
The river valleys are natural corridors for roads and railways and have had a strong influence on Calgary's layout. In the eastern sector of the city the valleys are largely used for industry, but elsewhere they provide attractive sites for homes, parks, and recreation facilities. These include Heritage Park, a reconstructed pioneer village; Canada Olympic Park, which was built for the Winter Olympics in 1988; and the Calgary Zoo, with its botanical garden and its Prehistoric Park, which displays life-size models of the dinosaurs that once lived in Alberta. 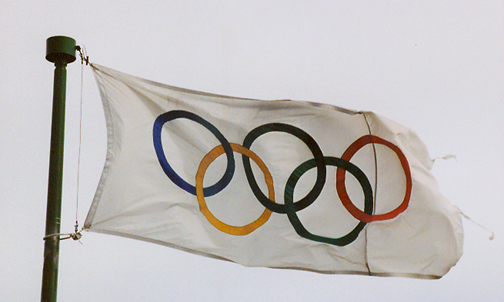 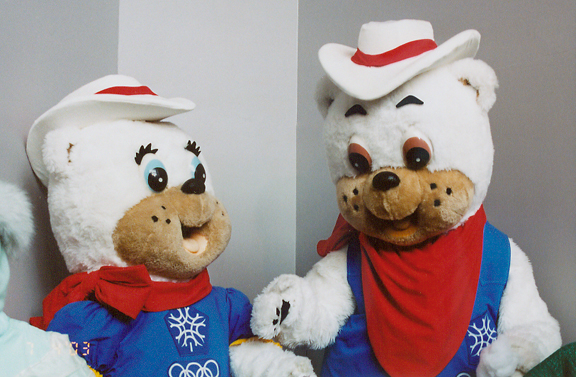 Hidy and Howdy
the Olympic Mascots

The downtown district sits on the widest part of the valley floor. It stands out as a dense clump of tall, modern office buildings, connected to one another through an elevated network of pedestrian bridges called the Plus 15 System. Many of Calgary's public and cultural facilities are also located downtown. Among them are Stephen Avenue Mall, a pedestrian street lined with historic buildings; Devonian Gardens, a rooftop conservatory; the Glenbow-Alberta Institute, an internationally famous museum and archive; the Calgary Centre for the Performing Arts, where the Calgary Philharmonic Orchestra and the city's leading theater companies are based; and Olympic Plaza, the main downtown square. Petro Canada Tower, the city's tallest structure at 55 stories, is one of several tall buildings that dominate downtown. Also nearby are the Alberta Science Centre/Centennial Planetarium; the Fort Calgary interpretive center, which provides information on the city's origins; and Stampede Park, where Calgary's world-famous livestock exhibition and rodeo, the Calgary Exhibition and Stampede (commonly called the Calgary Stampede), is held every July. 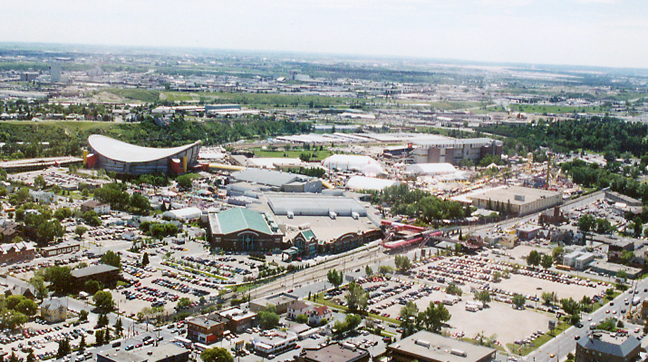 Stampede Park and the Saddledome
(on opening day of the Stampede)

Stampede Park also has one of the city's most remarkable structures, the saddle-shaped Saddledome, which was used as an Olympic stadium and is now the home of the Calgary Flames of the National Hockey League. 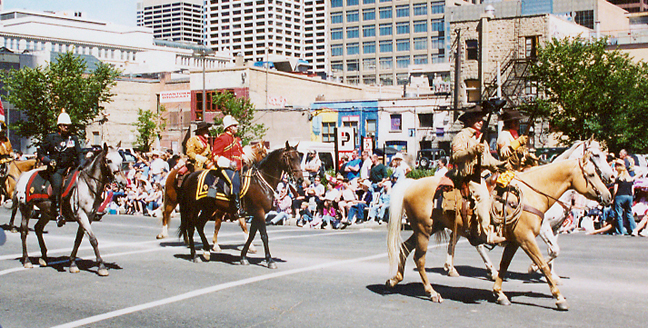 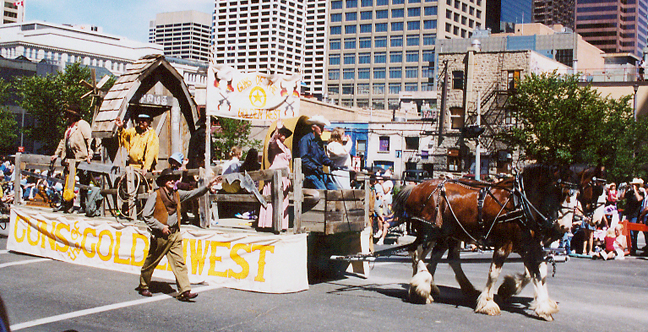 Other Calgary landmarks are the Southern Alberta Jubilee Auditorium, where the Calgary Opera and Alberta Ballet perform; McMahon Stadium, home to the Calgary Stampeders of the Canadian Football League; and Spruce Meadows, a world-class equestrian center. The University of Calgary (1966), Mount Royal College (1910), the Southern Alberta Institute of Technology (1916), and Alberta College of Art (1983) are the principal educational institutions. There are large natural parks at Fish Creek, Glenmore, and Nose Hill. 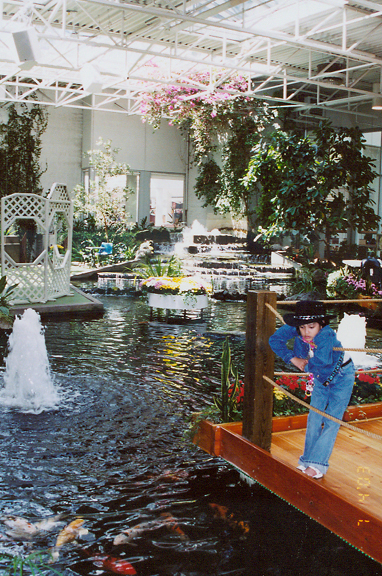 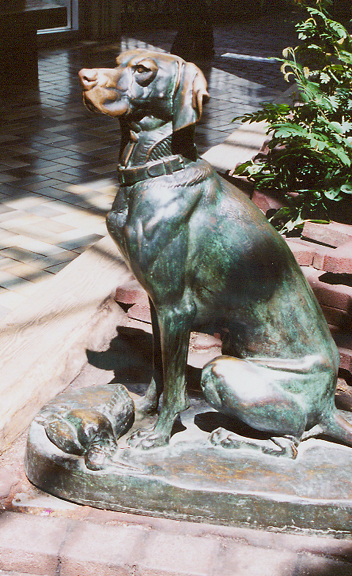 a beloved dog
statue in the gardens 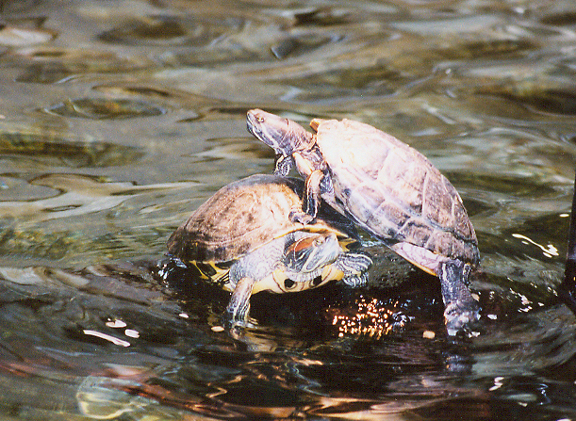