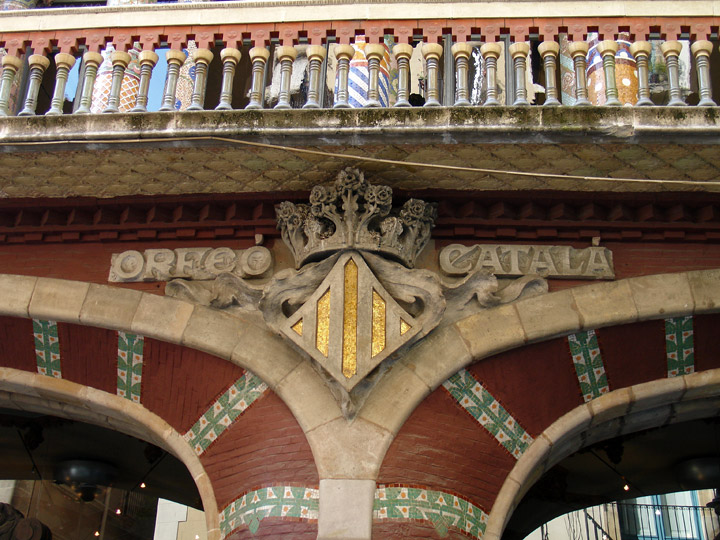 The Palau de la Música Catalana (Palace of Catalan Music) is a concert hall designed in the Catalan modernisme style by the architect Lluís Domènech i Montaner. It was built in Barcelona, Catalonia, Spain, between 1905 and 1908 for the Orfeó Català, a choral society founded in 1891 that was a leading force in the Catalan cultural and political independence movement that came to be known as the Renaixença (Catalan Rebirth) (Benton 1986, 56; Fahr-Becker 2004, 199). The project was financed primarily by the society, but important financial contributions also were made by Barcelona's wealthy industrialists and bourgeoisie. The Palau won the architect an award from the Barcelona City Council in 1909. Between 1982 and 1989, the building underwent extensive restoration, remodeling, and extension under the direction of architects Oscar Tusquets and Carles Díaz (Carandell et al. 2006, 138). In 1997, the Palau de la Música Catalana was declared a UNESCO World Heritage Site along with Hospital de Sant Pau. 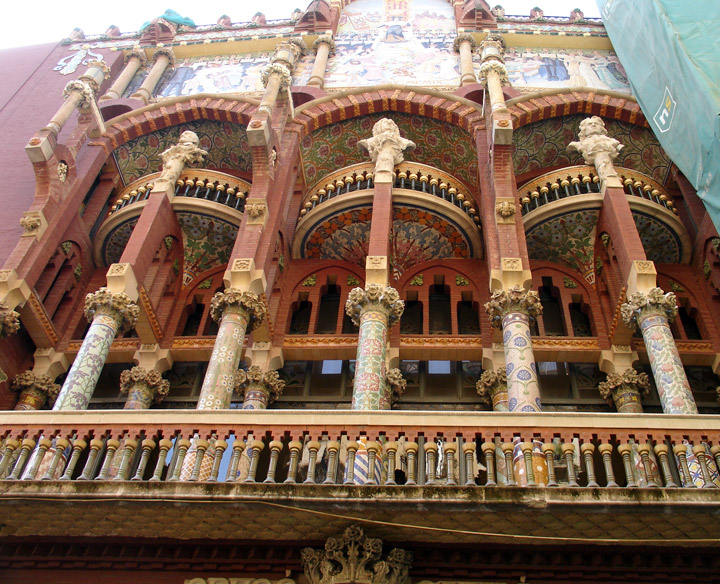 The Palau is located on a cramped street, the Carrer de Sant Francesc de Paula, in the section of old Barcelona known as La Ribera. It stands out there not only because it is such an exuberant building but also because the buildings that surround it are rather dull. Most of the other prominent modernisme buildings, those designed by Antoni Gaudí, for example, are located in the chic 19-century extension of the city known as the Eixample. 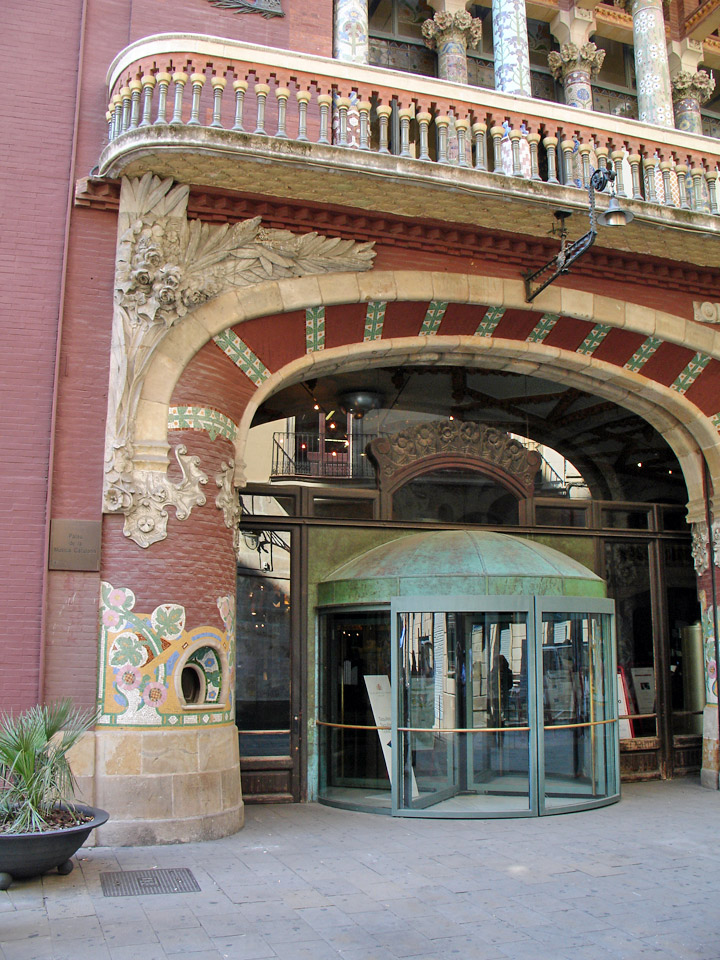 The design of the Palau is typical of Catalan modernisme in that curves predominate over straight lines, dynamic shapes are preferred over static forms, and rich decoration that emphasizes floral and other organic motifs is used extensively. In contrast to many other buildings built in the modernisme style, however, it must also be said that the design of the Palau is eminently rational. It pays strict attention to function and makes full use of the most up-to-date materials and technologies available at the beginning of the 19th century (e.g., steel framing). As Benton (1986, 58) has pointed out, "To eyes unaccustomed to the architecture of Barcelona, the impression of a riot of ornament lacking any logic or control seems overwhelming. And yet the building follows exactly the exhortations of the [architectural] rationalists. The structure, in brick and iron, is clearly expressed." 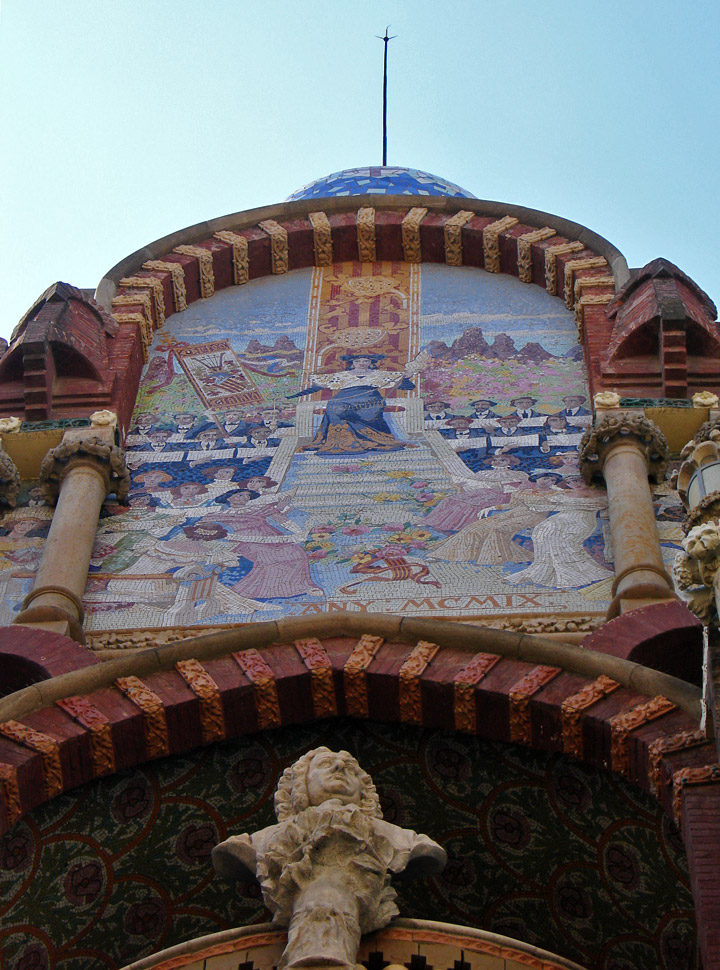 The wealthy citizens of Barcelona, who were becoming ever more sympathetic to the Renaixença at the time the Palau was built, asked its architect for building materials and techniques that symbolized the Catalan national character. In response, he commissioned and gave great creative freedom to a variety of local artisans and craftsmen to produce the fabulous ornamentation, sculpture, and decorative structural elements for which the Palau is famous. 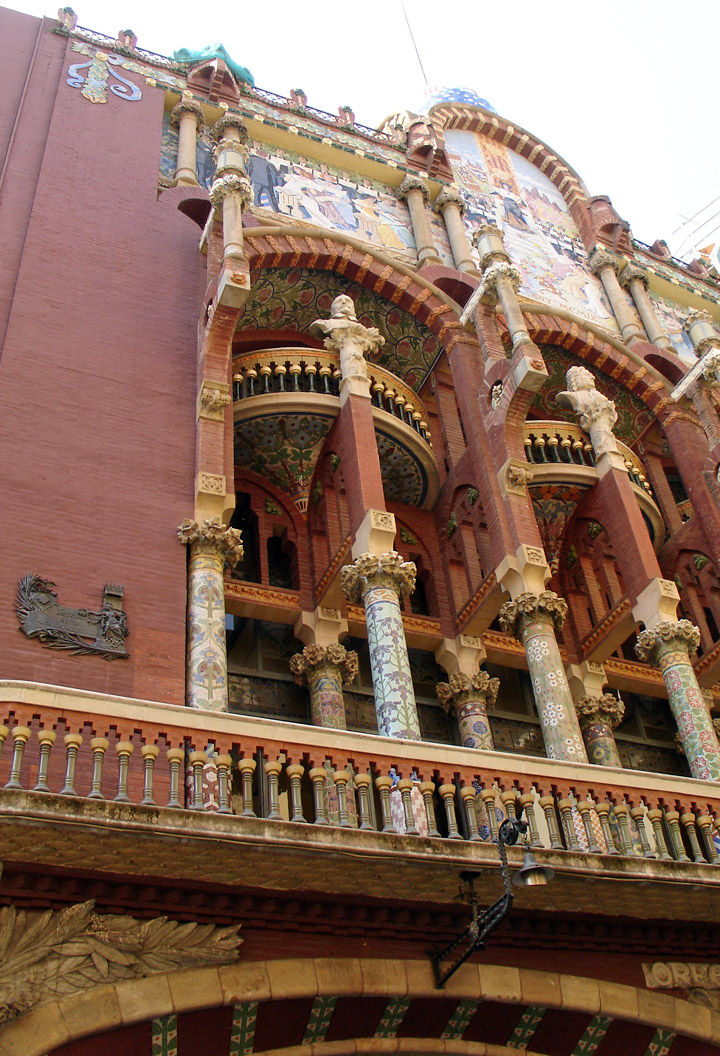 The rich decoration of the façade of the Palau, which incorporates elements from many sources, including traditional Spanish and Arabic architecture, is successfully married with the building's structure. The exposed red brick and iron, the mosaics, the stained glass, and the glazed tiles were chosen and situated to give a feeling of openness and transparency. Even Miguel Blay's massive sculptural group symbolizing Catalan music on the corner of the building does not impede the view into or out from the interior. As Carandell and co-authors (2006, 20) have pointed out, in the Palau "the house as a defense and protected inner space has ceased to exist." 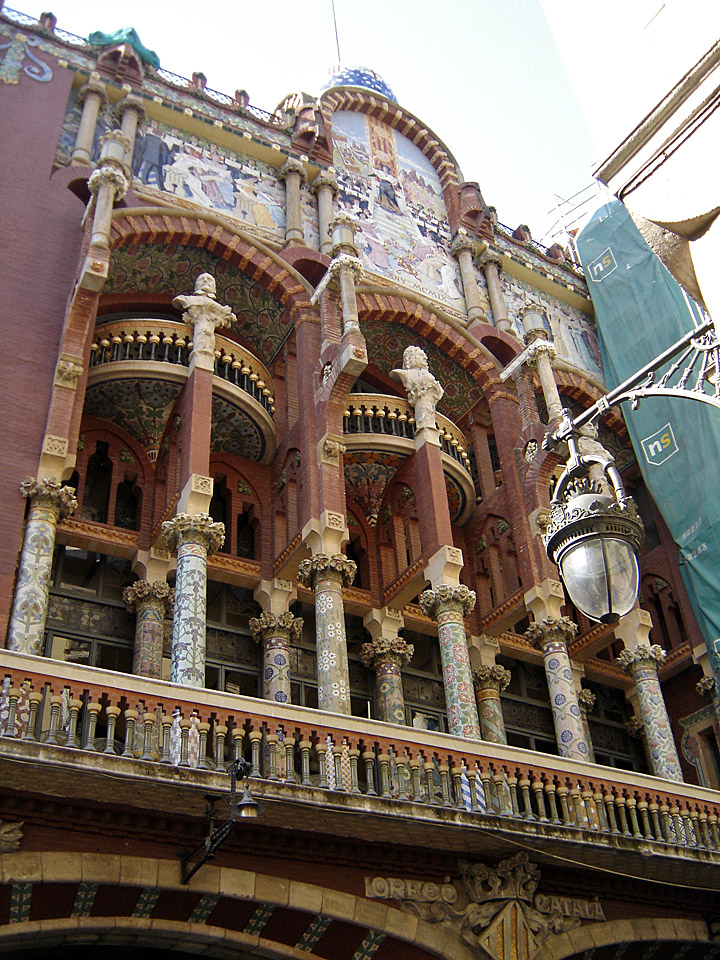 Two colonnades enjoy a commanding position on the second-level balcony of the main façade. Each column is covered uniquely with multicolored glazed tile pieces in mostly floral designs and is capped with a candelabrum that at night blazes with light (see photograph). Above the columns are large busts of Giovanni Pierluigi da Palestrina, Johann Sebastian Bach, and Ludwig van Beethoven on the main façade and Richard Wagner on the side. The top of the main façade is graced by a large allegoric mosaic by Lluís Bru that represents the members of the Orfeó Català, but it is impossible to see it clearly from the narrow street below. 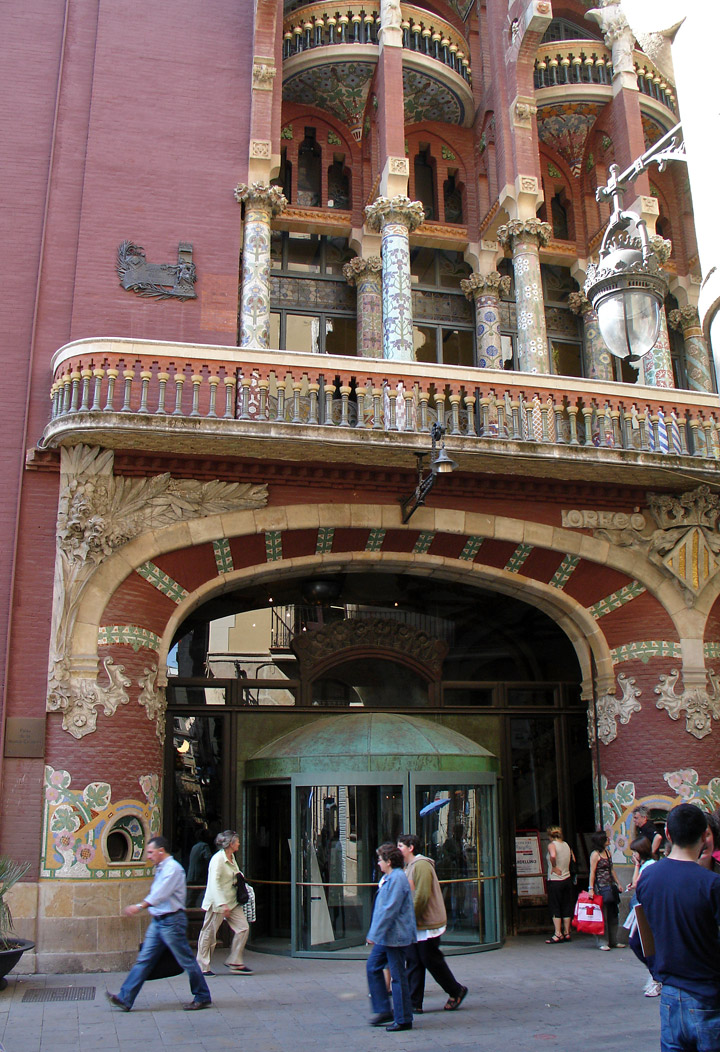 Originally, guests entered the Palau from the street through two arches supported by thick pillars that opened into the vestibule. The former ticket windows, which are located in the center pillar, are beautiful concentric arches adorned with floral mosaics of various materials created by Lluís Bru. 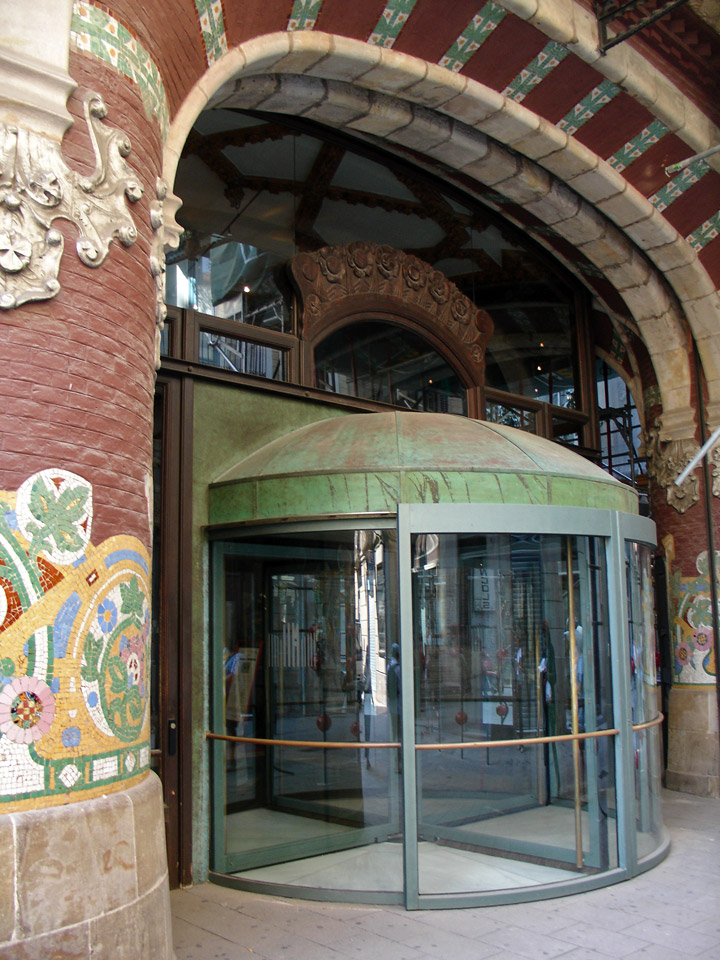 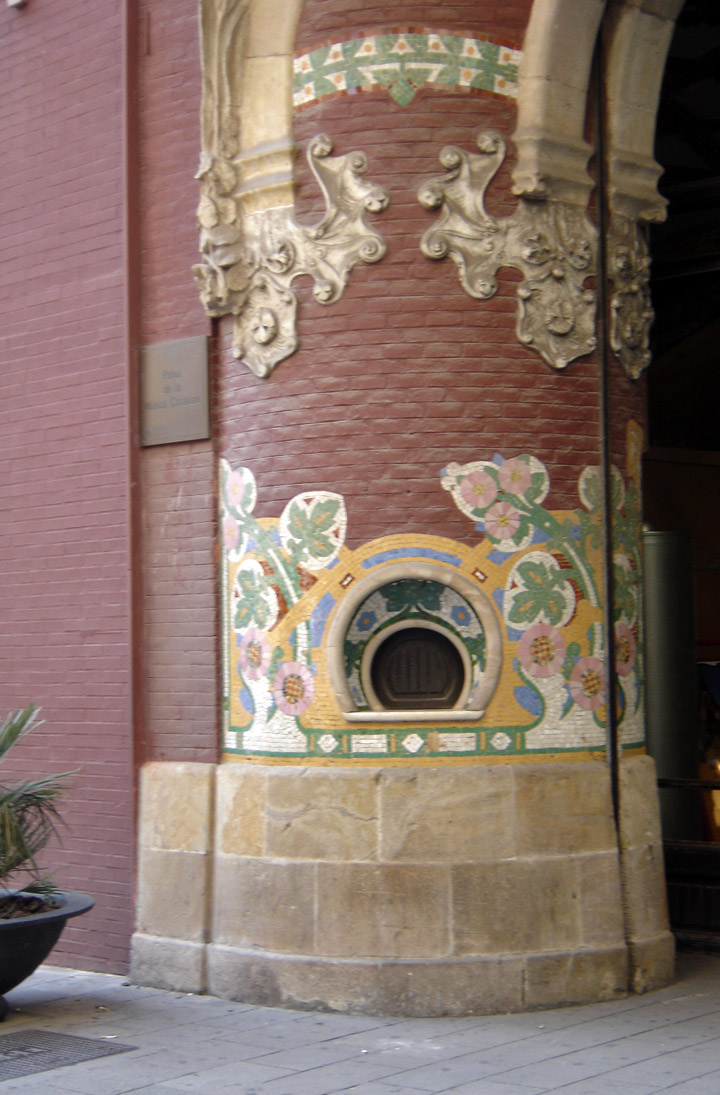 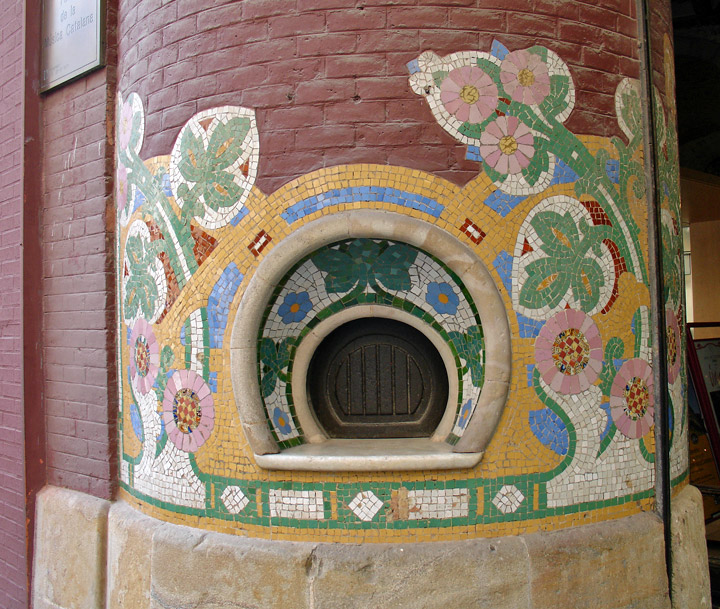