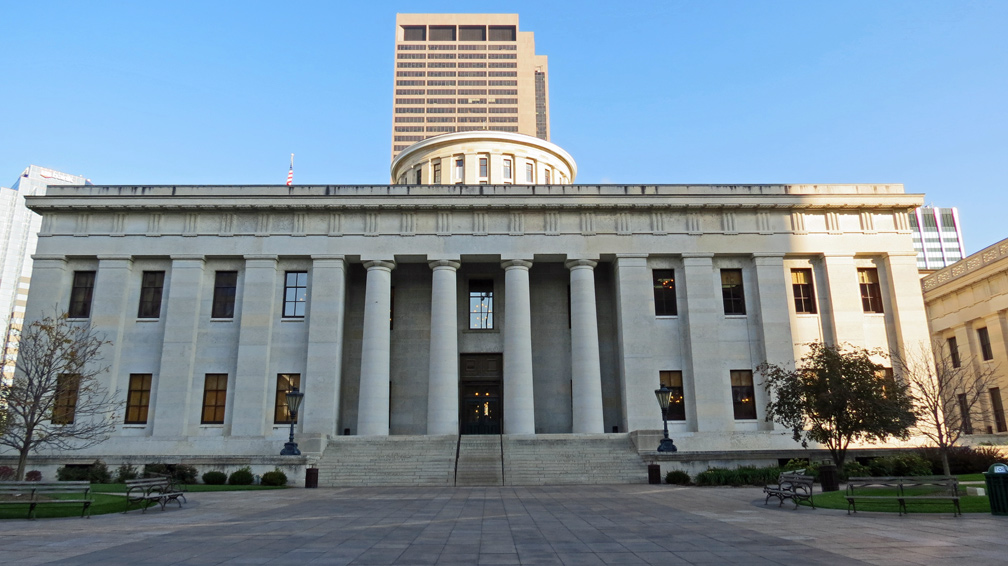 The Ohio Statehouse, located in Columbus, Ohio, is the house of government for the state of Ohio. The Greek Revival building houses the Ohio General Assembly and the ceremonial offices of the Governor, Lieutenant Governor, Treasurer, and Auditor. 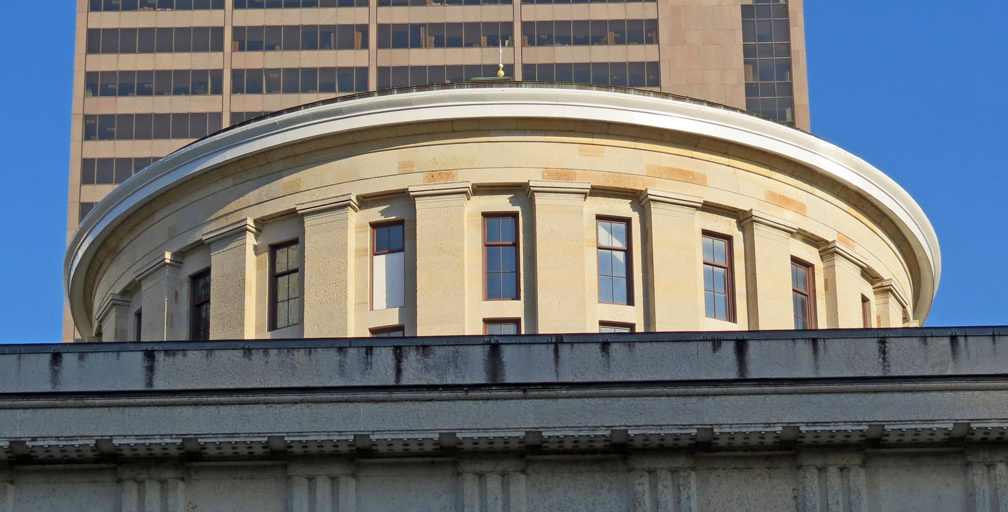 When the state government relocated to the new city of Columbus in 1816, it occupied a modest two-story building on the corner of High and State Streets. This early capitol had chambers for the Ohio House of Representatives and Ohio Senate, but the rapid growth and expansion of government functions resulted in overcrowding. Efforts to relieve the cramped quarters with additional small buildings were ineffective, and it soon became apparent that the government would require a larger facility. 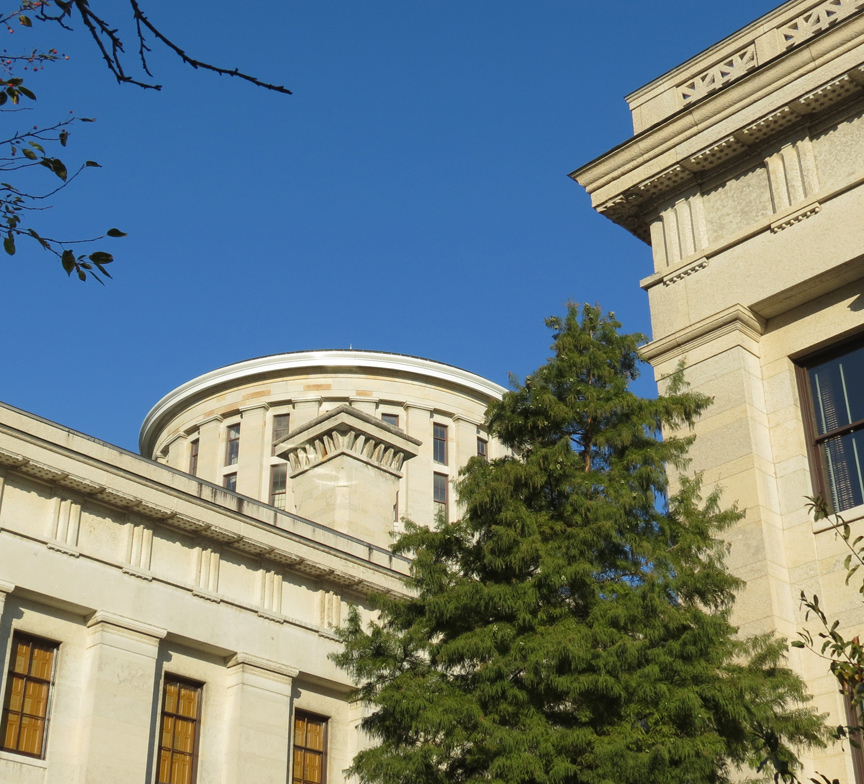 In 1838, Ohio's government announced a competition to select the design for a new Statehouse. This strategy was not unusual at the time, as important public buildings such as the U.S. Capitol had resulted from similar contests. From about fifty entries, three winners were selected: first prize was awarded to Henry Walter of Cincinnati, the second to Martin Thompson of New York, and the third to painter Thomas Cole, also of New York. However, the organizing commission responsible for choosing the winners was unable to agree on a final design for construction. 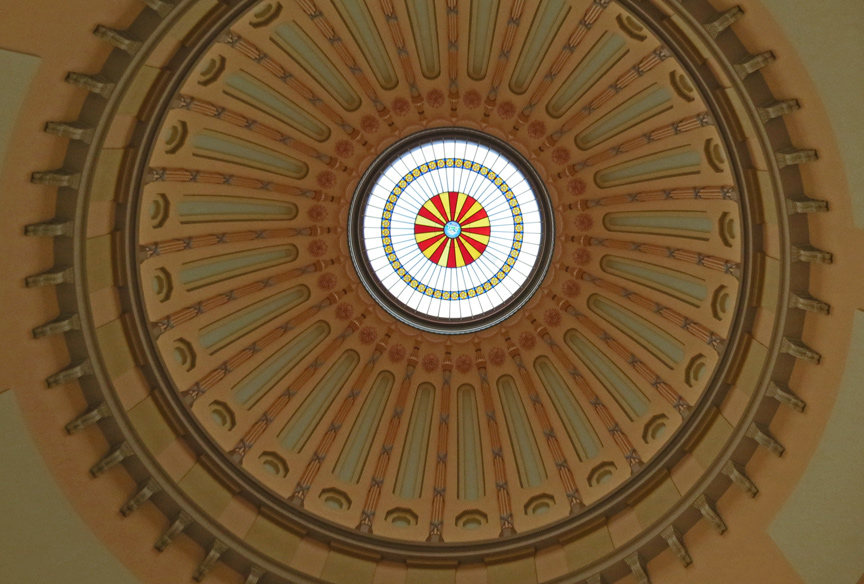 When the cornerstone was laid on July 4, 1839, the commission was still without a final design. Consultation with New York architect Alexander Jackson Davis resulted in a composite design that merged some key features of the three winning entries, but it was rejected as being too expensive. Henry Walter, the first-place winner of the design contest, was chosen to supervise construction of the new capitol, and he began working on another composite design that was based largely on the design of third-place winner, Thomas Cole. It seems likely that Henry Walter was chosen to receive the first premium basically because he was an Ohioan, and though the entry submitted by Cole may have been more favored by the commission overseeing the design process, his status as an "outsider" may have been a problem. Cole had a personal friendship with one of the commissioners, a man named William A. Adams who was from Steubenville. Also, Cole's nephew, William Henry Bayless, coincidentally a Steubenville native, was apprenticed in the office of Alexander Jackson Davis. 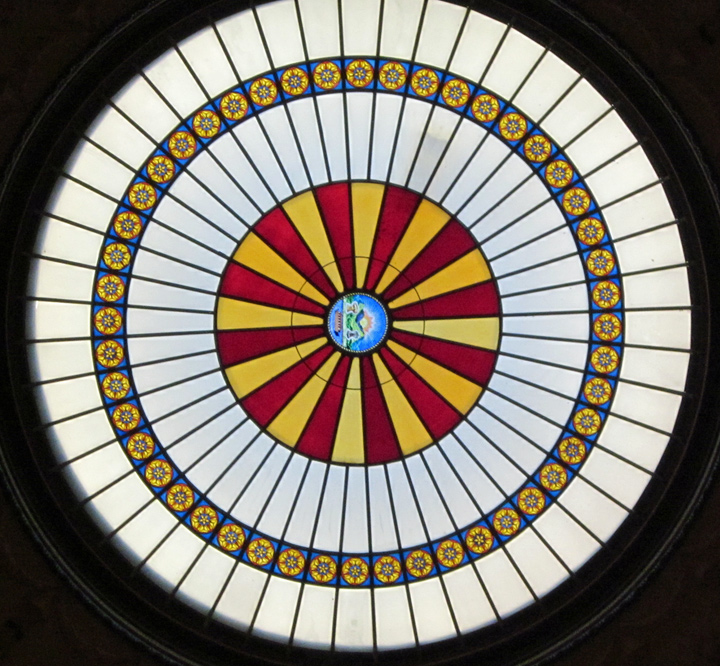 occulus that lights the interior rotunda.

Work on the building's foundation and lower level had only just begun when the Statehouse project encountered the first of many difficulties. The legislation that made Columbus the official capital city of Ohio was set to expire. While various factions within the government engaged in debate over relocating the capitol to another city, construction of the Statehouse was stopped. Open excavations were refilled with earth, and Capitol Square became open pasture for livestock. 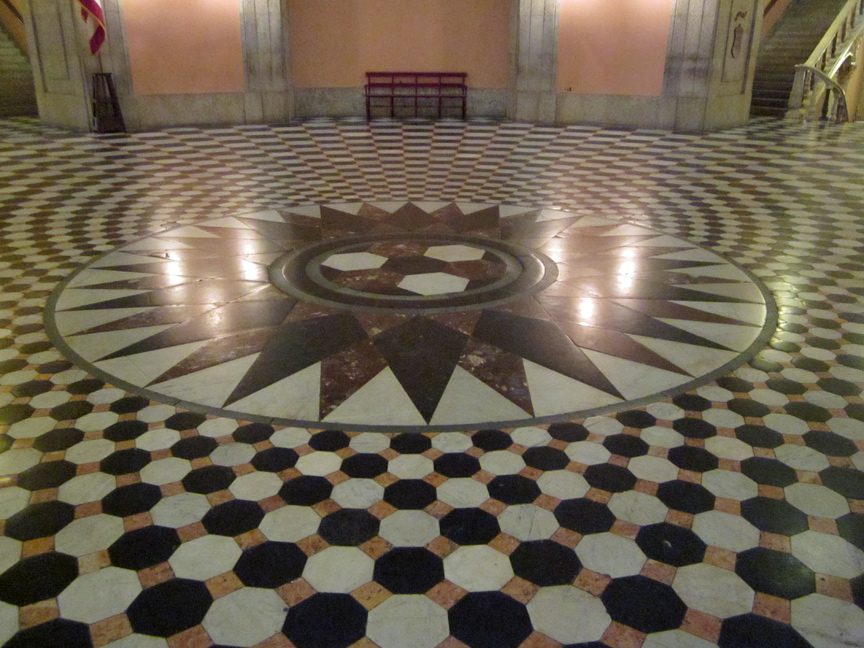 The Statehouse remained neglected until February, 1848, when William Russell West and J.O. Sawyer of Cincinnati were appointed architects and general supervisors of the project. By May construction had resumed. Unfortunately, a cholera epidemic began in Columbus, prompting widespread flight to the countryside by residents. Once the epidemic subsided, work on the Statehouse continued steadily, interrupted only by intermissions during the harsh Ohio winters. Comparing plans of the various architects it is apparent that perhaps the most striking change, and one that has endured in the finished building, was the fact that West and Russell eliminated the rounded dome that all previous designers had suggested for the building, instead replacing it with a low conical roof. 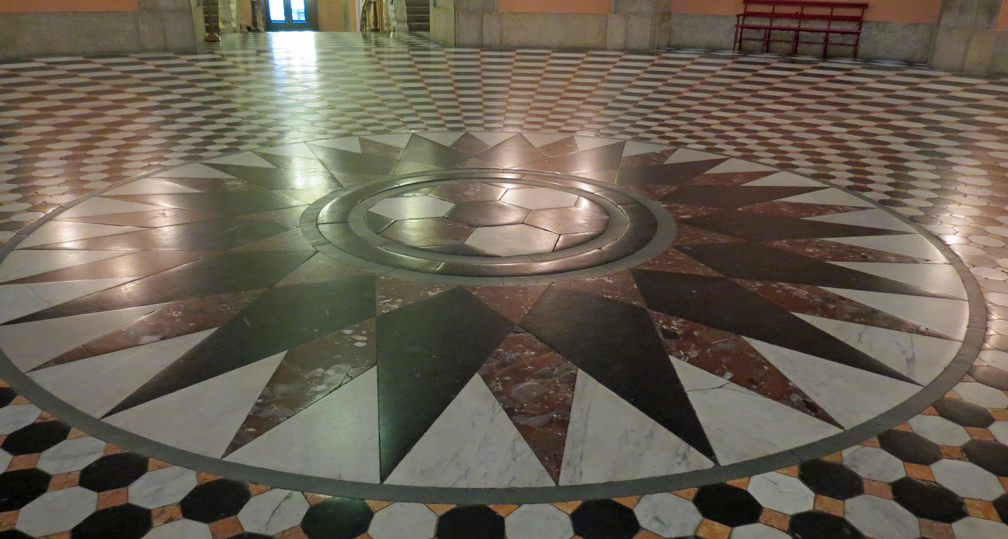 Fire consumed the old two-story capitol building in 1852, which created a new urgency to complete the Statehouse project as government offices were forced to relocate to various buildings around Columbus. While some suspected arson, the exact cause of the fire remains a mystery to this day. With the Statehouse exterior nearing completion by 1854, Columbus architect Nathan Kelley was hired to supervise the design and construction of the building’s interiors. One of his major tasks would be to provide a system for heating and ventilation in the building, which had not been considered previously. An innovative steam heating system was constructed, with warmed air moved through the building in what Kelley called "air sewers"—small passages made of bricks that linked the various floors of the building. With great fanfare, the new Statehouse opened to the public on January 7, 1857, and soon thereafter the Ohio General Assembly convened in their new chambers. By now, most of the building was completed, with the notable exception of the rotunda. Although actual work on the building was proceeding smoothly, government officials were deeply dissatisfied with Mr. Kelley, citing problems with his working methods and aesthetic choices. 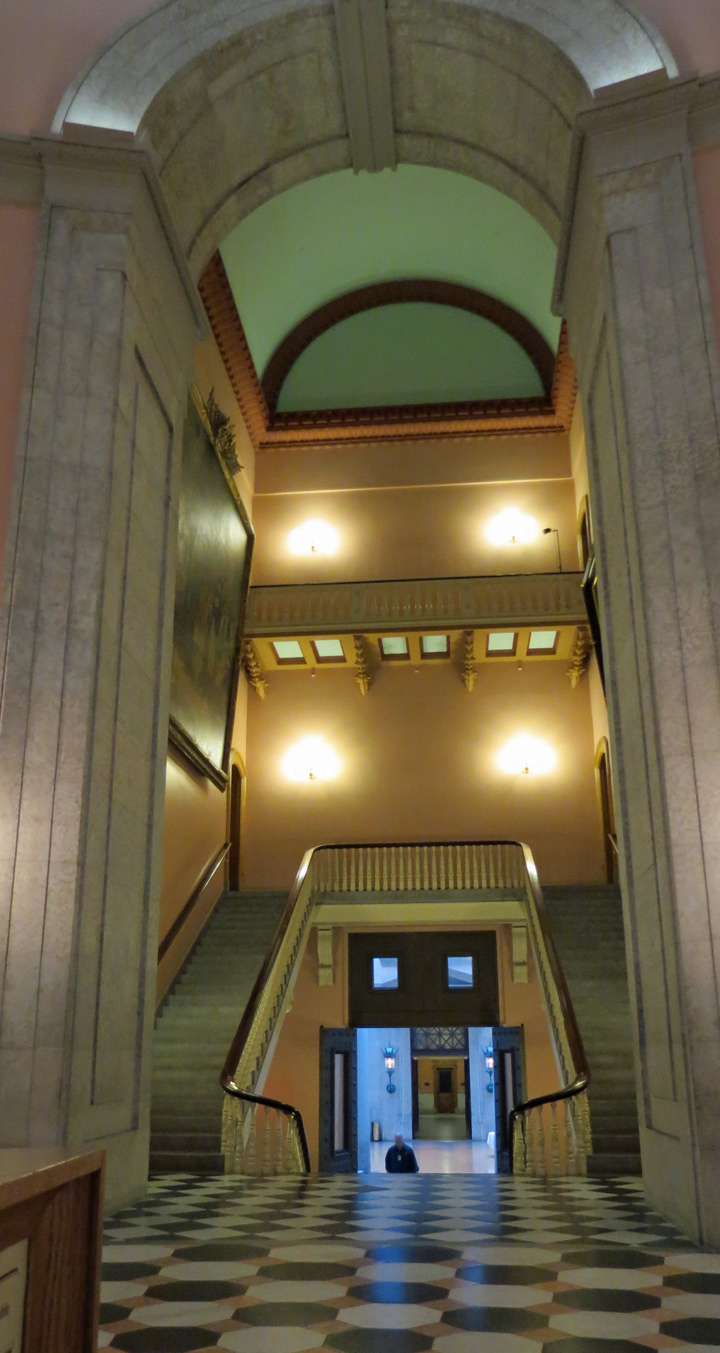 Isaiah Rogers, a well known architect based in Cincinnati at the time, was recruited to supervise the final stages of the Statehouse's construction. During his tenure, Rogers oversaw completion of the building's interior and coordinated work on the distinctive rotunda and its enclosing cupola. One of the building's most distinctive exterior features is the low, conical roof atop the cupola, positioned where many viewers expect to see a dome. In the long span between beginning construction on the Statehouse and its completion, the "finished" design changed many times and various proposals included a round dome atop the building. Rogers, in deciding not to use a dome, was actually reverting to a design scheme by architects West and Sawyer. In the end, the building featured a low conical roof that some critics would deride as "a Chinese hat." Construction of Capitol Square, including its buildings, grounds, and landscaping, was finally completed in 1861. 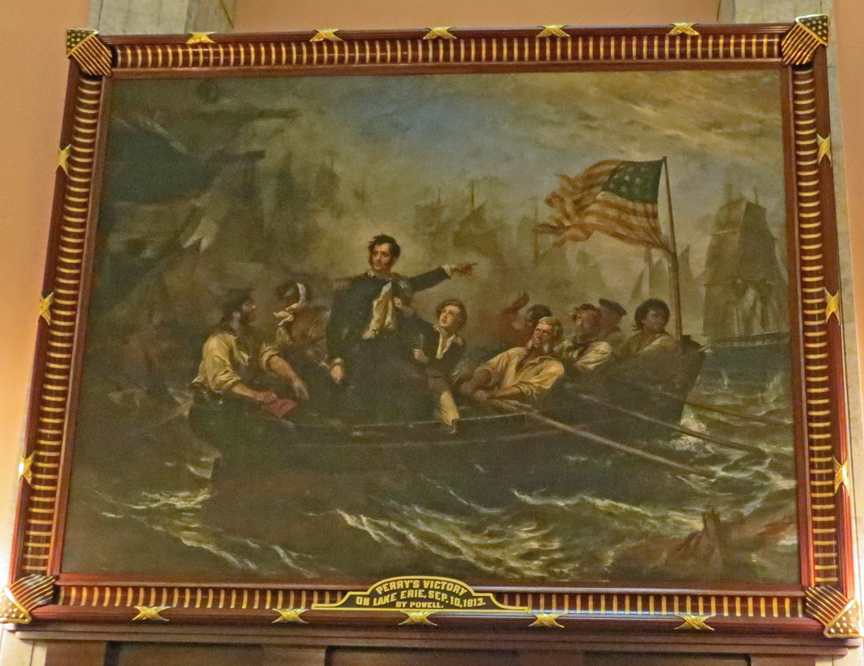 As the function of State government changed and expanded, changes and expansions occurred at the Ohio Statehouse. Originally, the building was the main location for all aspects of state government. As more offices and work rooms were required, large spaces would be subdivided into smaller areas. The most prominent example was the conversion to offices of the four open courts that occupied areas on the interior of the building. These open areas were from top to bottom of the structure and were intended to admit light and fresh air to the inner reaches of the building. The advent of electric lighting coupled with the need for space meant that levels of offices would come to occupy these large open areas. The fifty-four rooms the building originally held increased to 317 rooms by 1989. 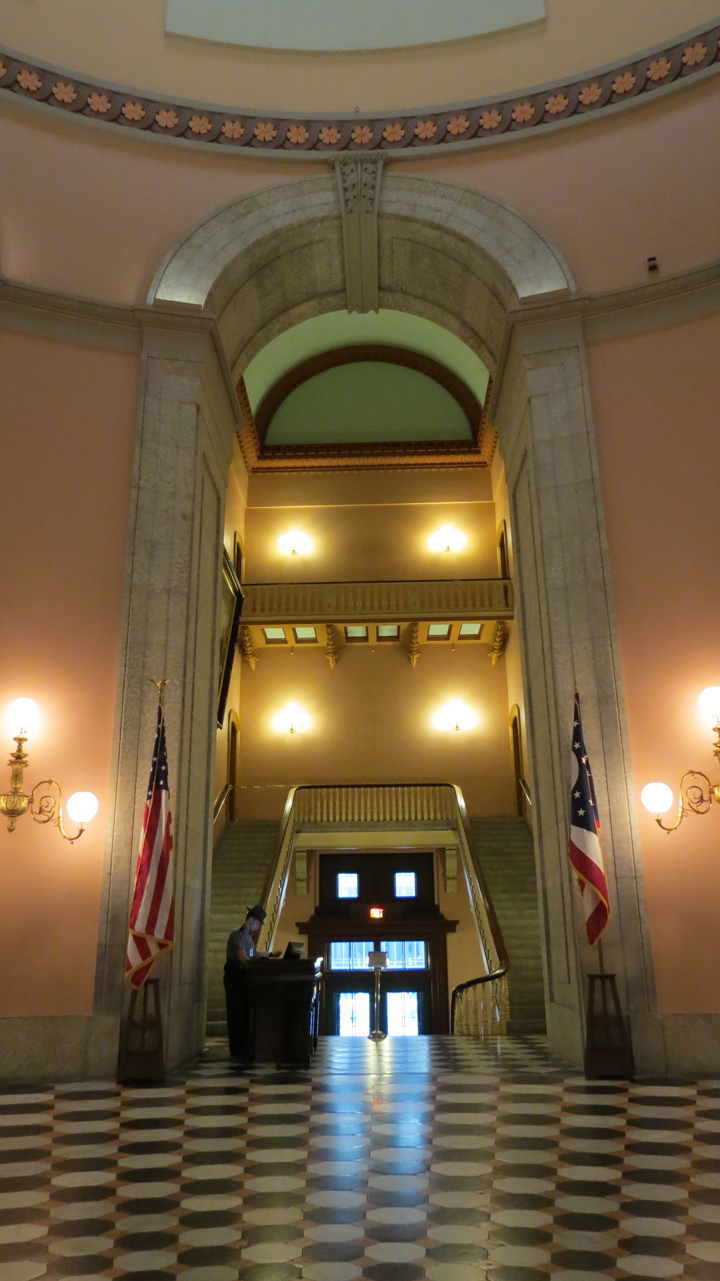 In 1901, the Supreme Court was moved to a separate building on the east side of Capitol Square to alleviate crowding, and to give the court the prestige of its own building. The new building, named the Judiciary Annex, was constructed of the same Columbus limestone as the Statehouse. Neoclassical on the exterior, the interior spaces, especially the grand central staircase are Beaux Arts in style. 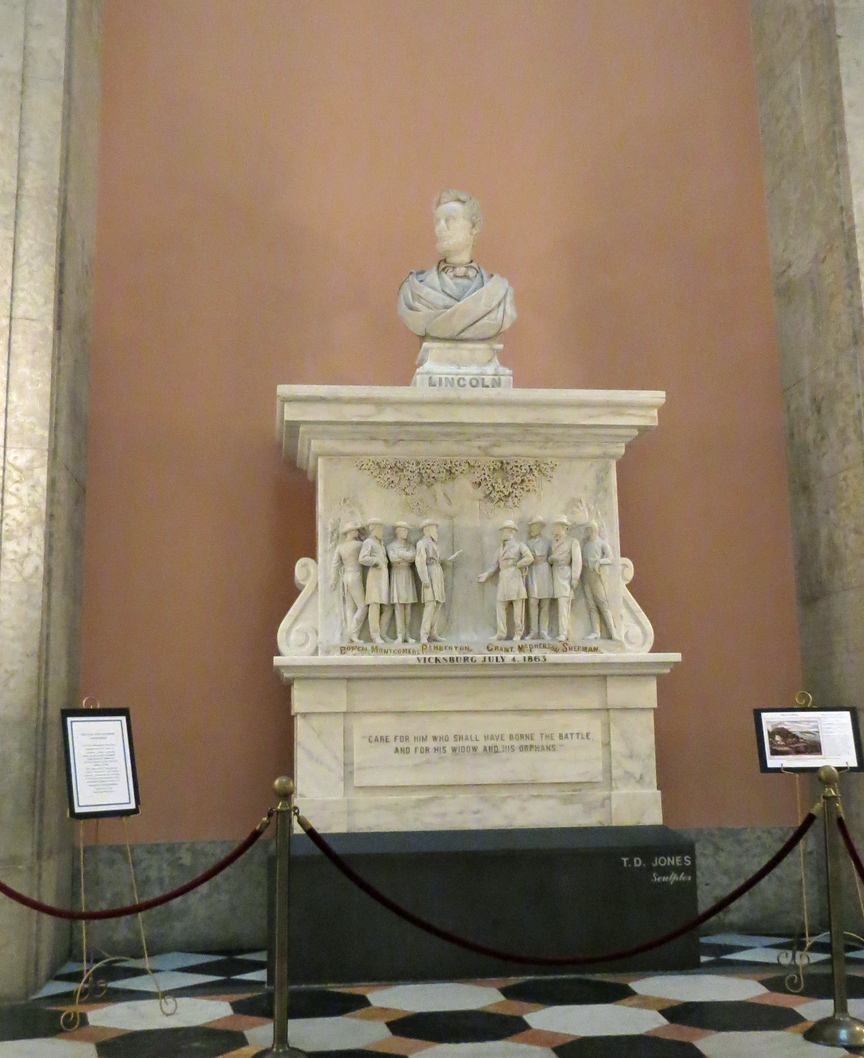 Lincoln and the Civil War

The two buildings became crowded, and decay from heavy usage and inadequate maintenance was evident. Both buildings survived despite proposals made to either demolish one or both buildings, or remodel them substantially. In 1989, a massive project commenced to restore the buildings to the splendor their original builders envisioned as well as make them useful and practical government buildings. Original furniture was sought for return to the building when possible, and modern reproductions of long gone items such as carpets and light fixtures were created. The large scale light fixtures in the House and Senate were based in large part on surviving period fixtures in the Vermont State House, which was being restored at the same time. The Atrium, which connected the Statehouse with the Judiciary Annex, was completed in 1993. After the renovation, the Judiciary Annex became the Senate Building. 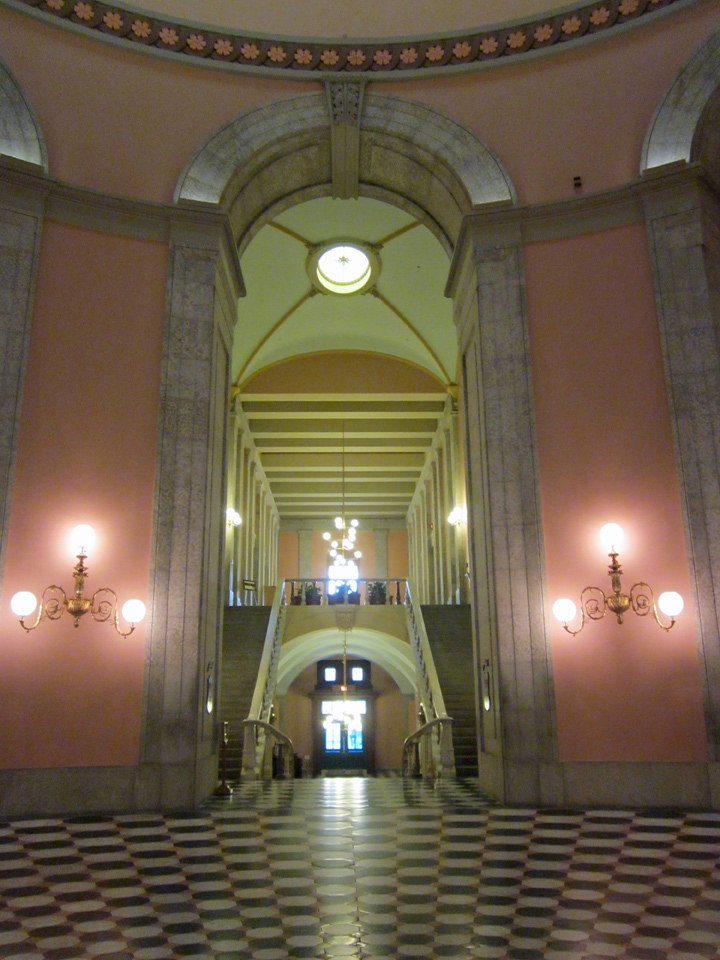 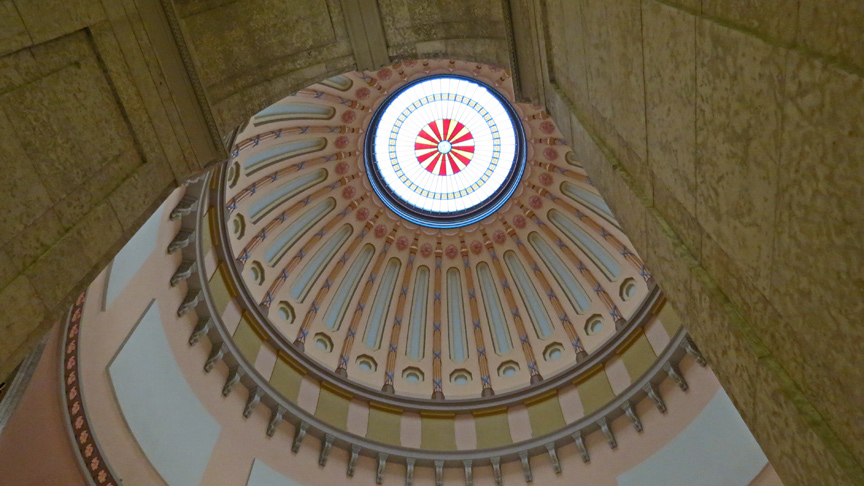 The Statehouse features a central recessed porch with a colonnade of a forthright and primitive Greek Doric mode, built of Columbus limestone that was quarried on the west banks of the Scioto River. A broad and low central pediment supports the windowed astylar drum, referred to as a Cupola, which contains an occulus that lights the interior rotunda. 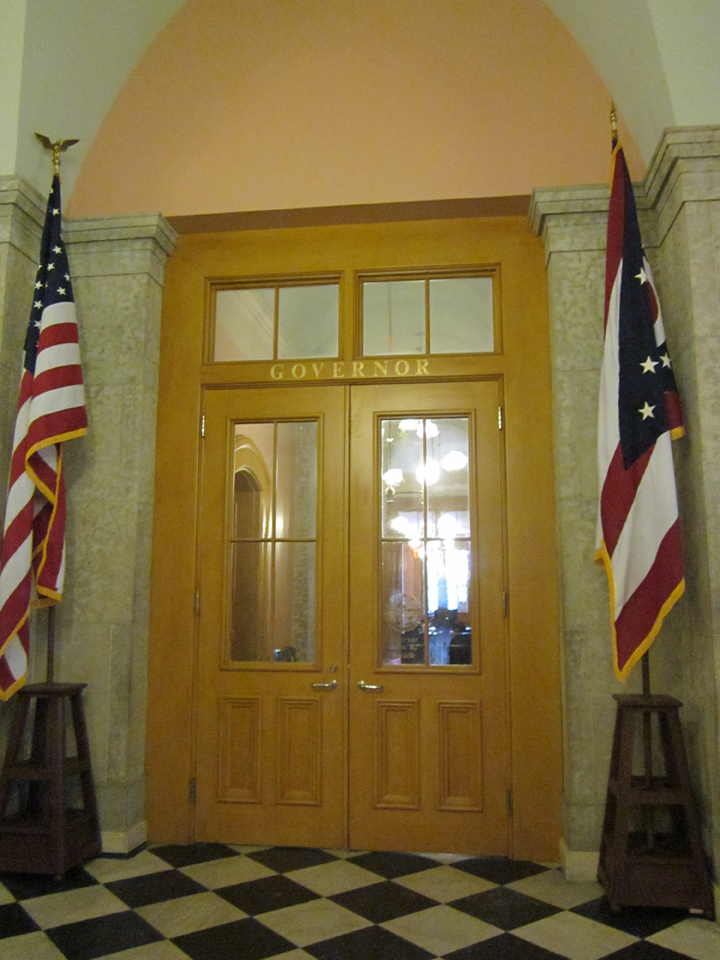 Unlike many U.S. state capitol buildings, the Ohio Statehouse owes little to the architecture of the United States Capitol. It was designed and built before the U.S. Capitol was enlarged to its present form, with the large white dome that would become ubiquitous on government buildings in America. 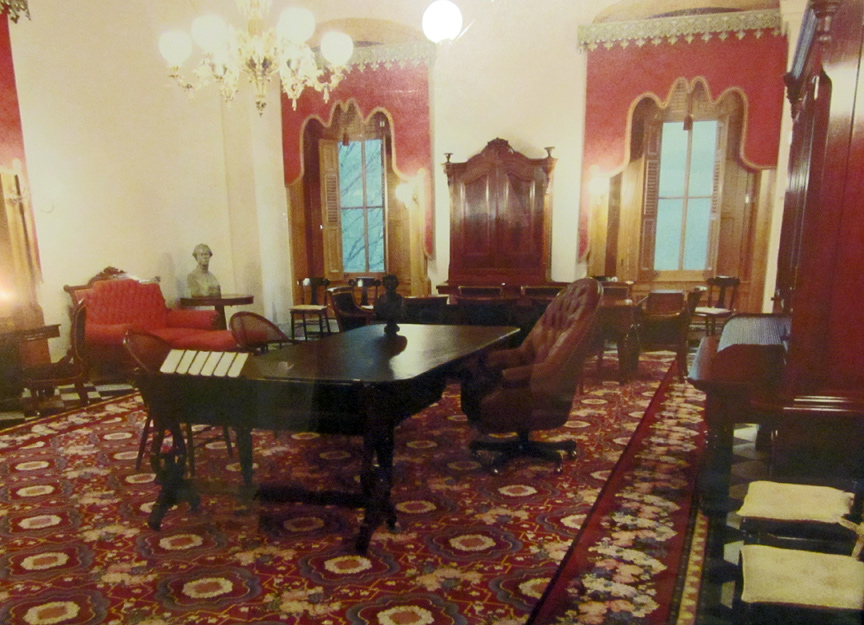 The Ohio Statehouse has been termed a supreme example of Greek Revival style. It is not patterned on one single building, but is a combination of stylistic elements from Greek sources, melded with contemporary needs and functions. The cupola shows direct influence by the Tholos of Delphi, a circular temple built about 360 BC. The Parthenon of Athens is also an influence. No ancient Greek building would have contained windows, but they were a major part of Greek Revival for a more practical reason: before electric light, sunlight was the major source of illumination. 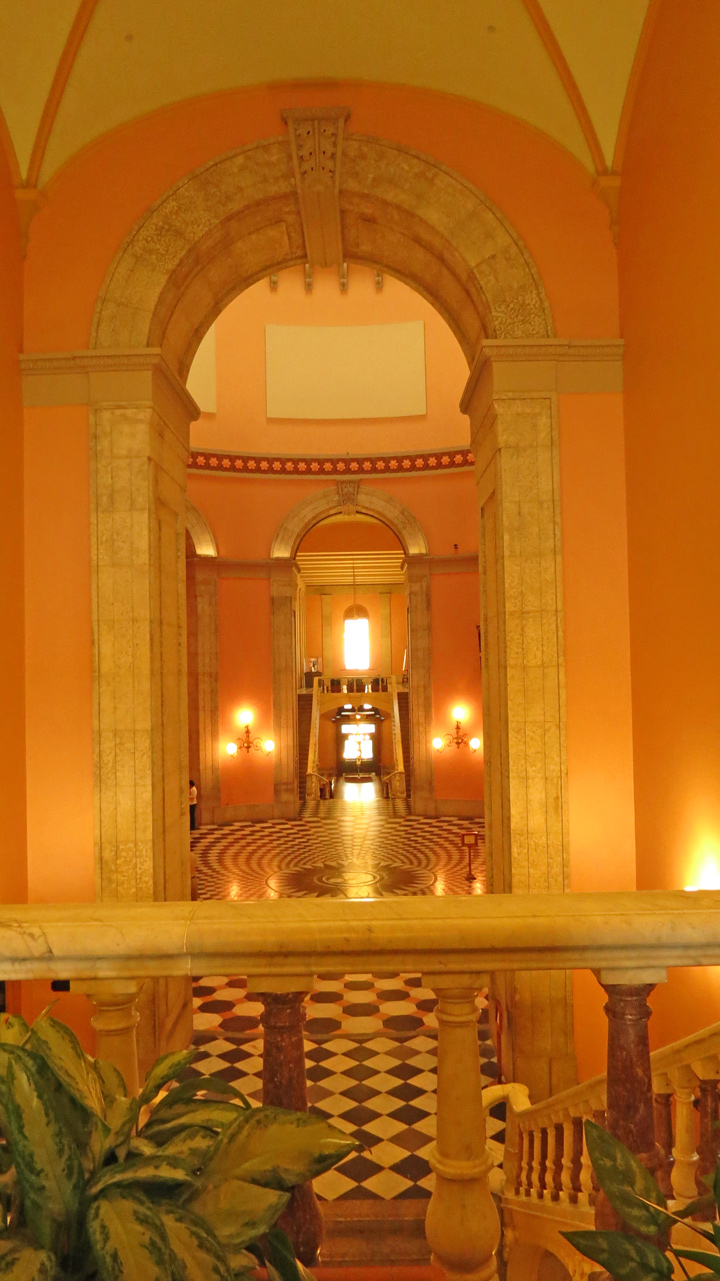 The ceremonial offices of the Governor, Lieutenant Governor, Treasurer, and Auditor are located on the first floor of the building. The relocation of the Governor's working office to the Vern Riffe Center for Government and the Arts, located across High Street from the Statehouse, was originally a temporary action taken while the historic building was undergoing an extensive restoration and upgrading. At the completion of the project the Governor, George Voinovich preferred the larger, more modern space and did not return to the Statehouse office except for occasional ceremonial use. Voinovich's successor Bob Taft used the historical Governor's Office in a similar way. Former Governor Ted Strickland, however, stated during his 2006 election campaign his intention to use the Statehouse office on a regular basis. Strickland considered the presence of the Governor in a building where the Legislature also works as both symbolic and practical examples of how the parts of government relate to each other. 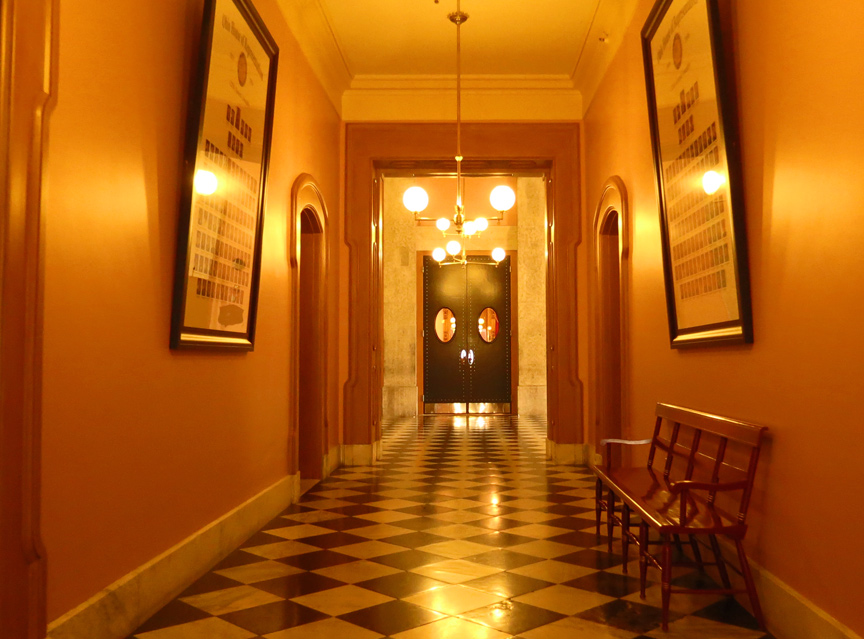 The Ohio General Assembly chambers are on the second floor. Although in general its appearance is similar to its original appearance, it has been modernized in many ways. Modern information and communication capabilities have been added. 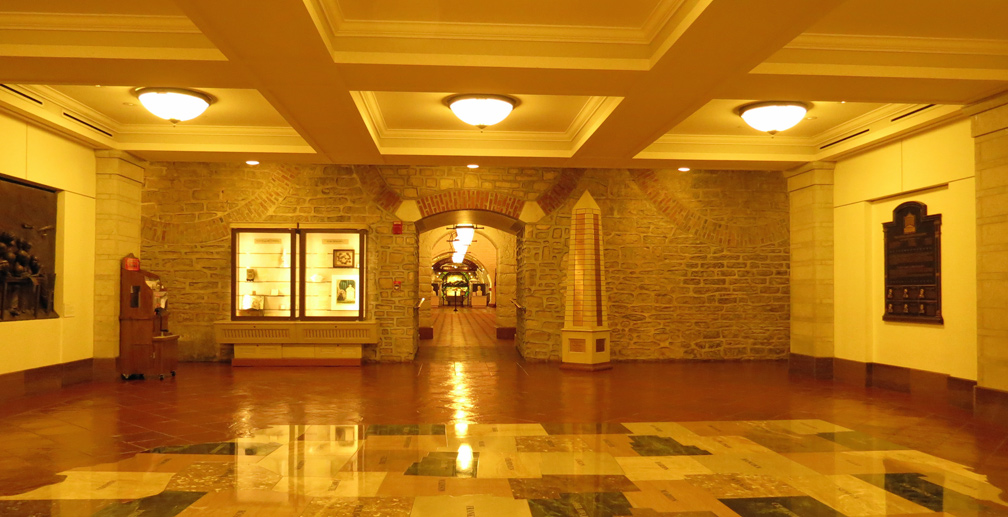 The Atrium, which connects the Statehouse with the Senate Building, is a large open space which hosts government functions and ceremonies as well as various meetings and events. It is constructed of the same limestone as the two adjoining buildings. 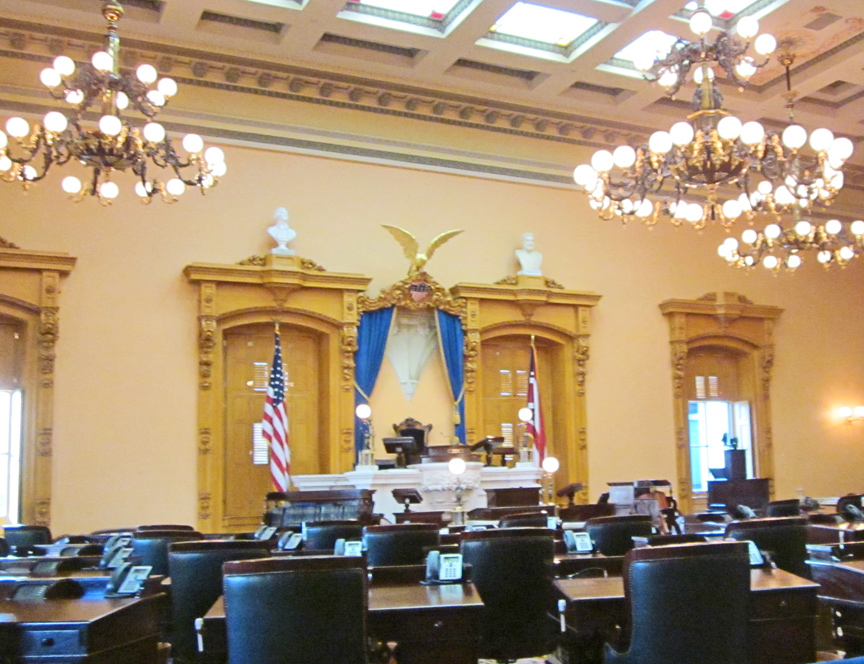 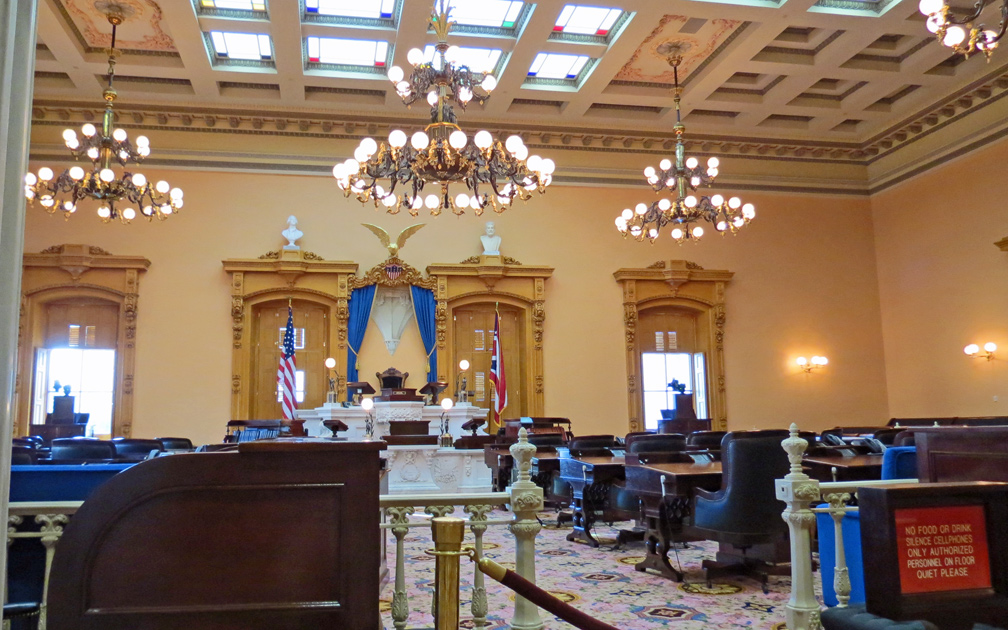 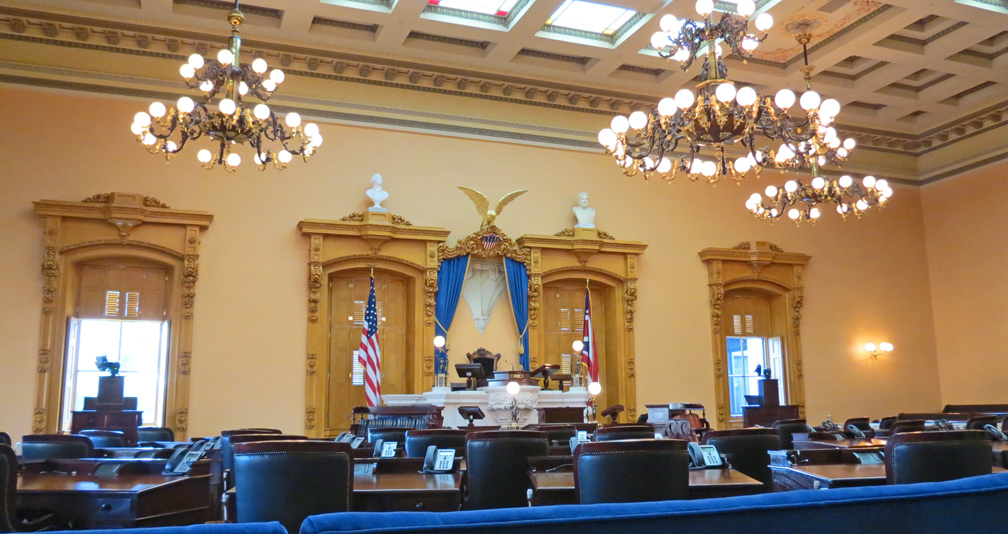 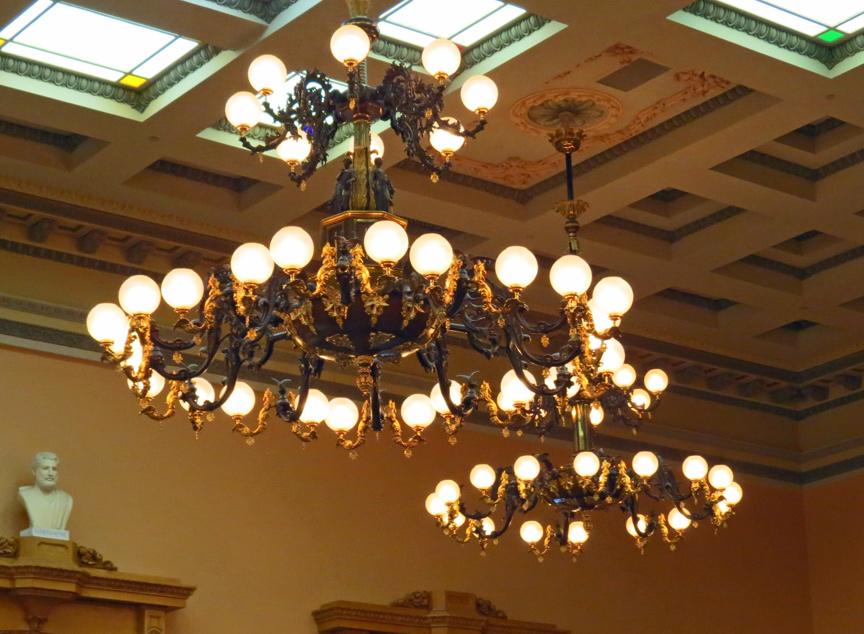 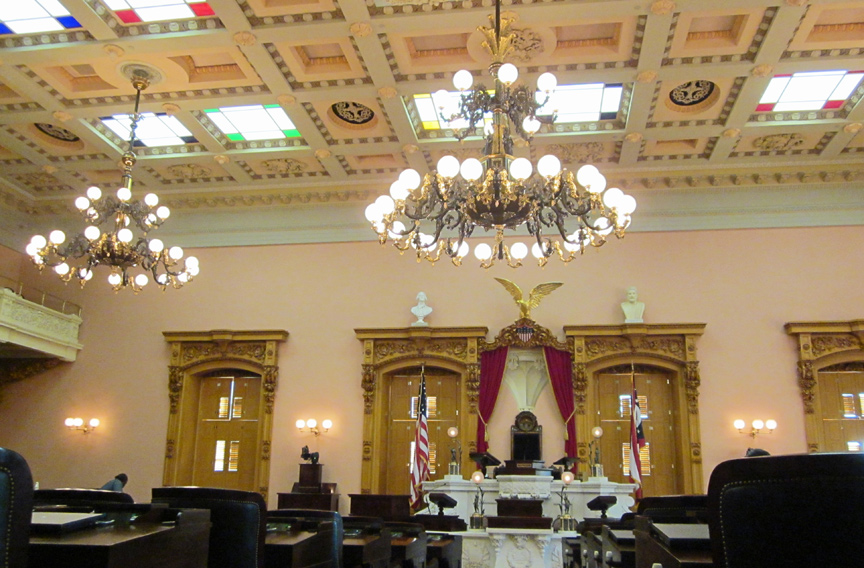 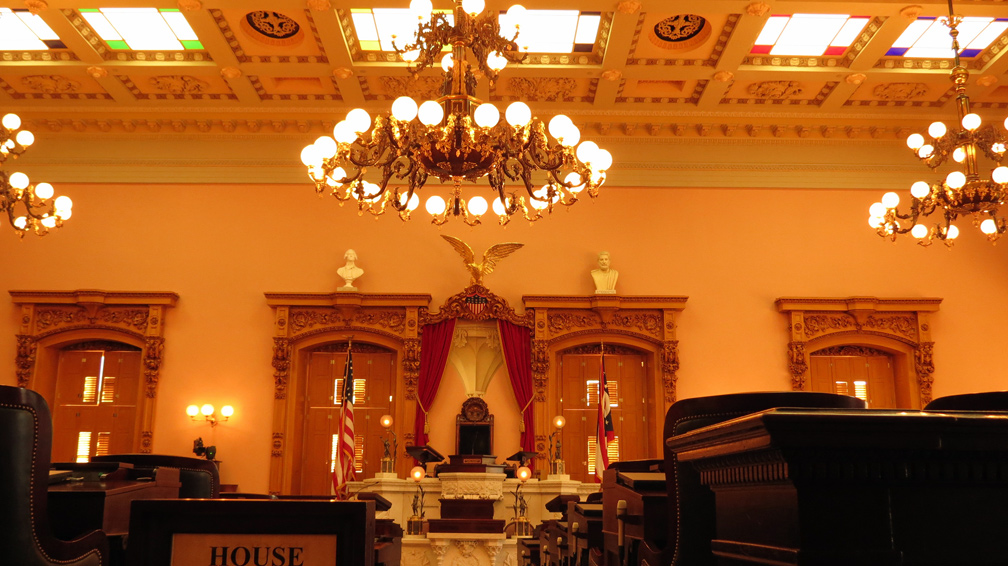 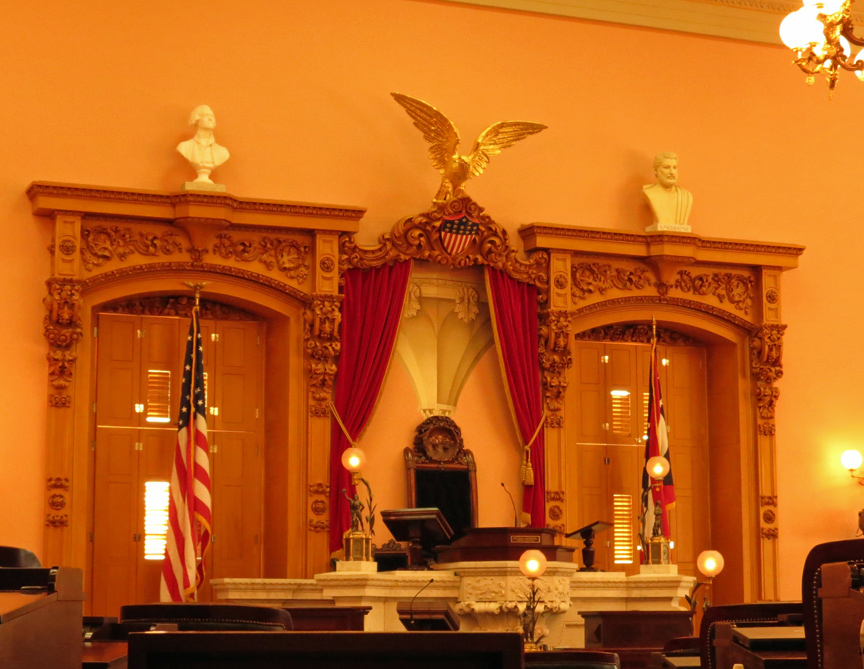 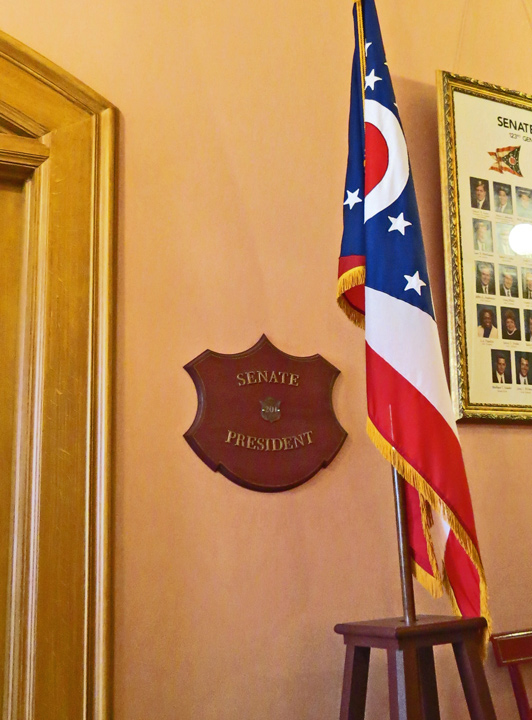