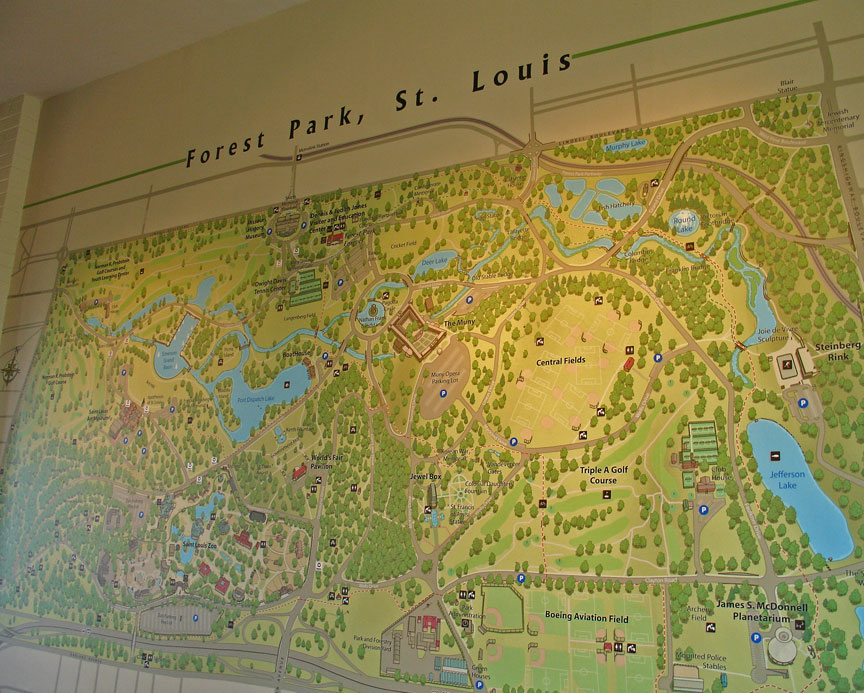 Forest Park in St. Louis, Missouri, opened in 1876 and the former site of the Louisiana Purchase Exposition of 1904, (better known as "The World's Fair") is one of the large urban landscape parks created during the later 19th century, following the example of Central Park in New York City. At 1,293 acres (5.2 km²), Forest Park is over 50% larger than New York's Central Park (843 acres or 3.41 km²). 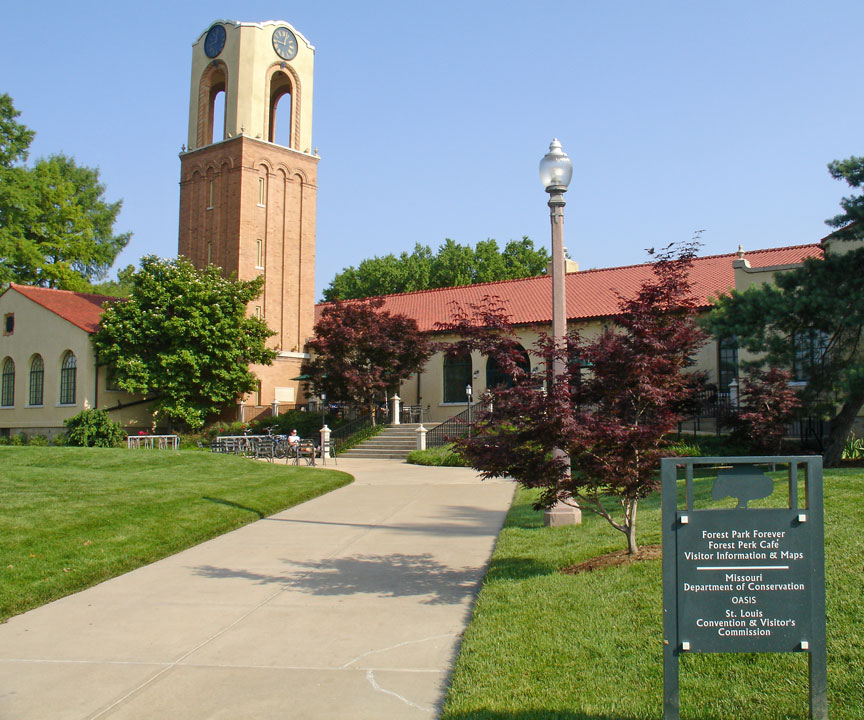 The next largest parks in the city of St. Louis are Tower Grove Park (289 acres) and Carondelet Park (179 acres). 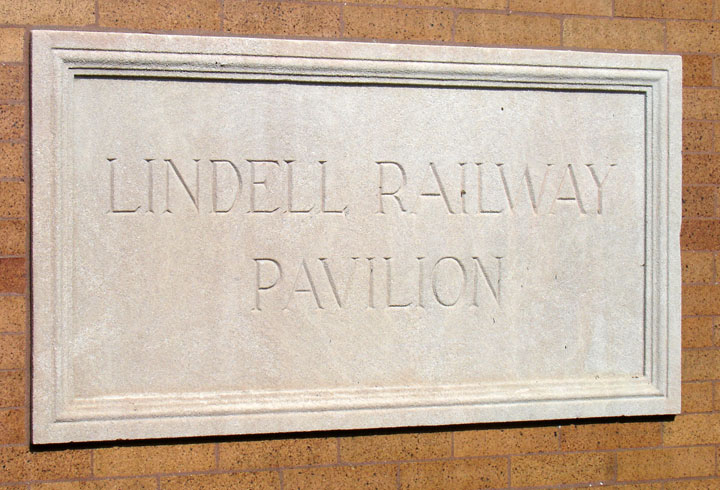 formerly the Lindell Railway Pavilion at the Fair

Forest Park is located along the western edge of the City of St. Louis, though it is located nearly in the center of the entire metropolitan area. It is bordered by Skinker Boulevard and Washington University in St. Louis to the west, I-64/US-40 and Oakland Avenue to the south, Kingshighway Boulevard and Barnes-Jewish Hospital and the Washington University Medical Center to the east, and Lindell Boulevard to the north. 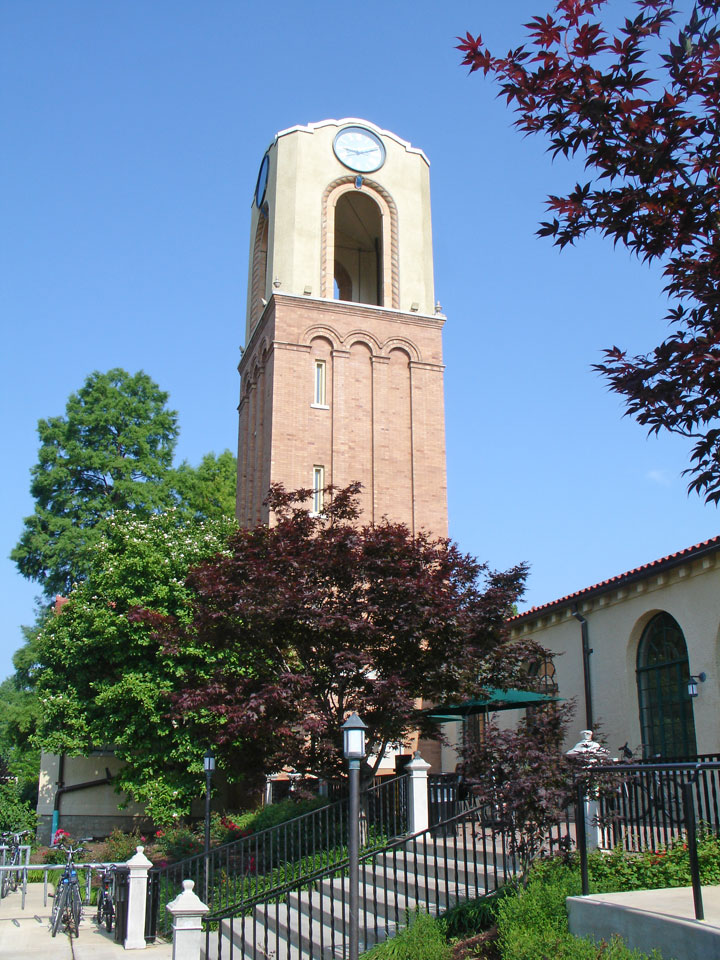 Neighborhoods bordering Forest Park are Skinker/DeBaliviere and DeBaliviere Place to the north, Central West End and Forest Park Southeast to the east, Kings Oak, Cheltenham, Clayton/Tamm (a.k.a. Dogtown) and Hi-Pointe to the south and Wydown/Skinker to the west. Also close to Forest Park to the west are the cities of Clayton, Maplewood, Richmond Heights and University City. 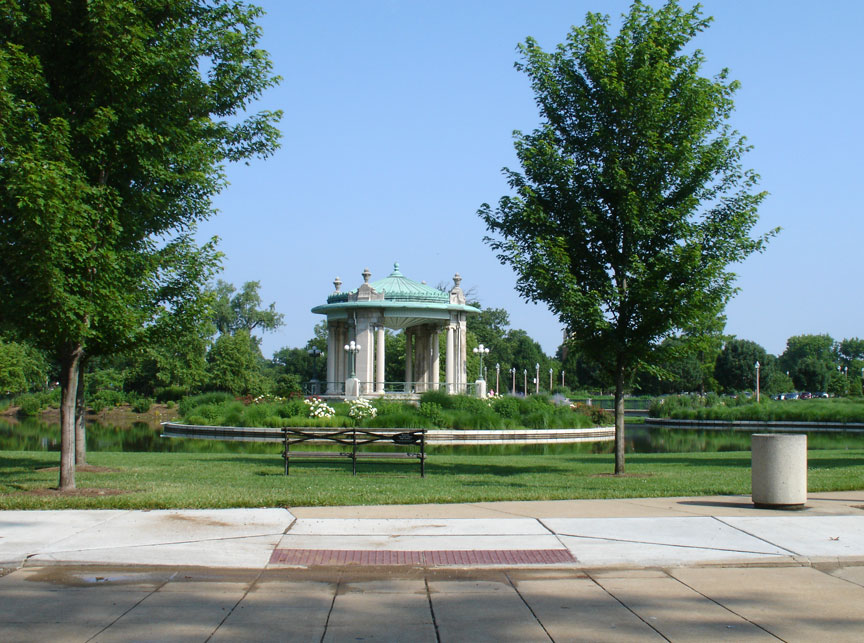 Forest Park was originally miles west of St. Louis' city boundaries. The park was dedicated June 24, 1876. On a day in which the temperature reached nearly 90 degrees, an estimated 50,000 residents of a city with a population somewhat more than 300,000 attended opening ceremonies. Many came in carriages while many others rode the train from the city, on track which had opened less than a week before. A crowd gathered near the new music stand, was entertained by a variety of music and listened to speakers who praised the new park. 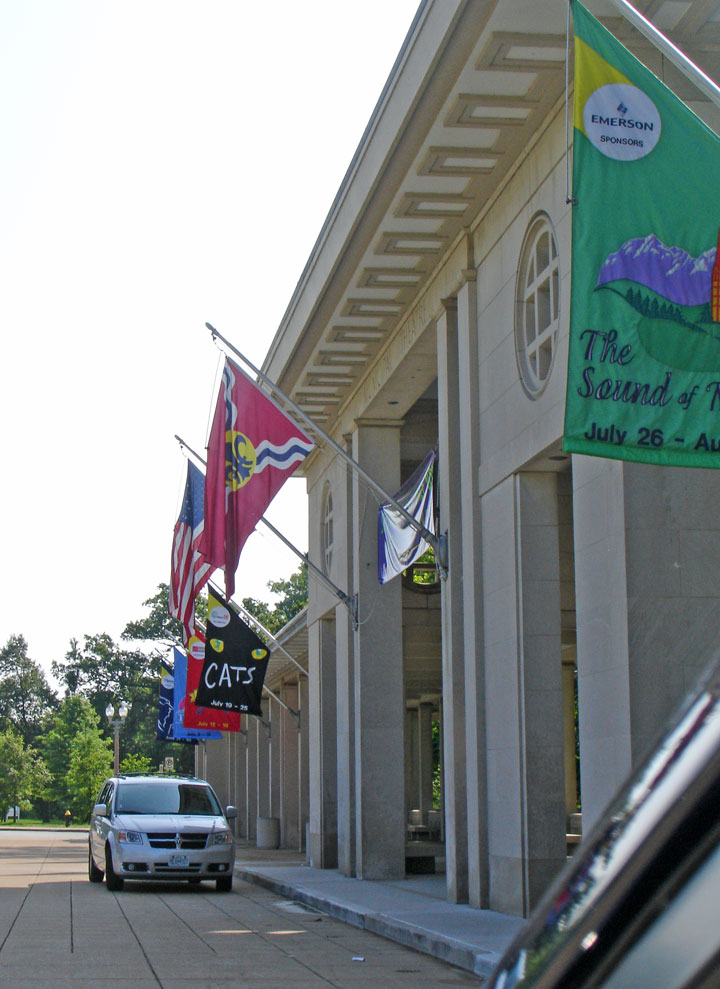 An 1864 plan for a large park in the city had been soundly rejected by St. Louis voters. In 1870, Hiram Leffingwell had proposed a 3,000-acre "St. Louis Park" outside the city, to extend approximately three miles west of King's Highway (now Kingshighway), but there was strong opposition and the bill that would have established the park died in the Missouri legislature. 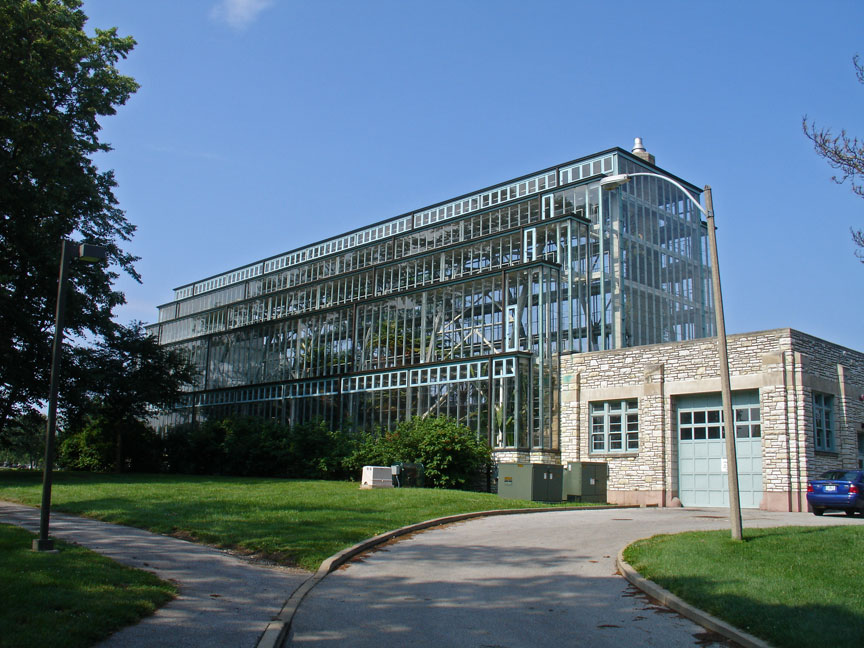 In 1872 the legislature passed laws that didn't require voter approval and established a 1370 acre park, as well as a smaller park further north, to be financed by special taxing districts. The boundaries of the city were extended to include the taxing districts. But in April, 1873, the Missouri Supreme Court declared the Forest Park taxing district unconstitutional. Some land for the park had already been purchased and sellers were left holding worthless bonds. When the legality of extensions to city boundaries was questioned, the legislature repealed the extensions. 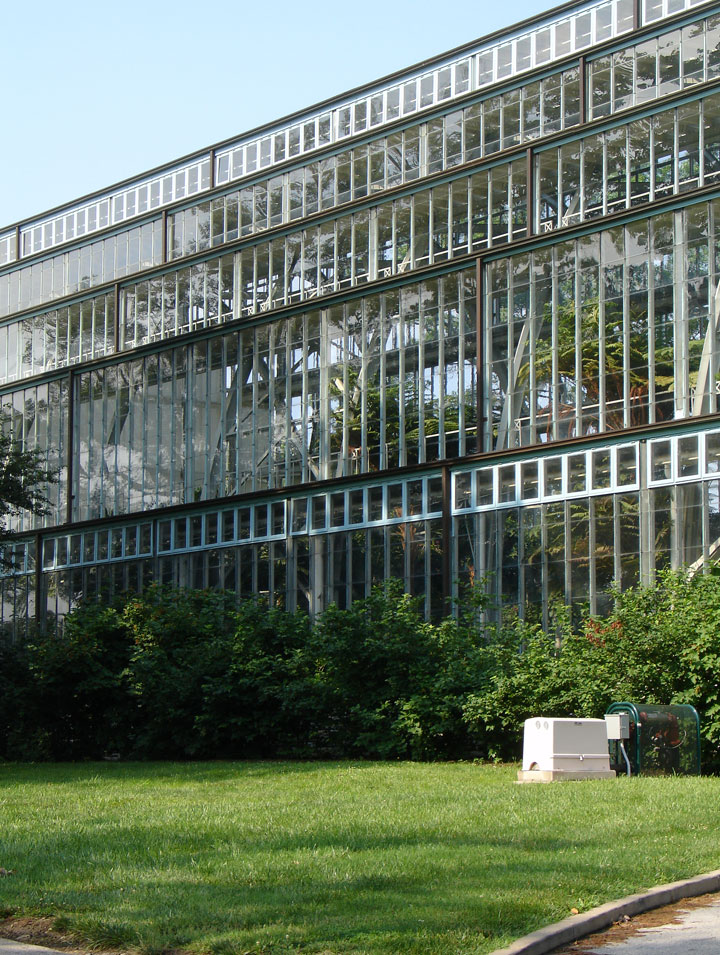 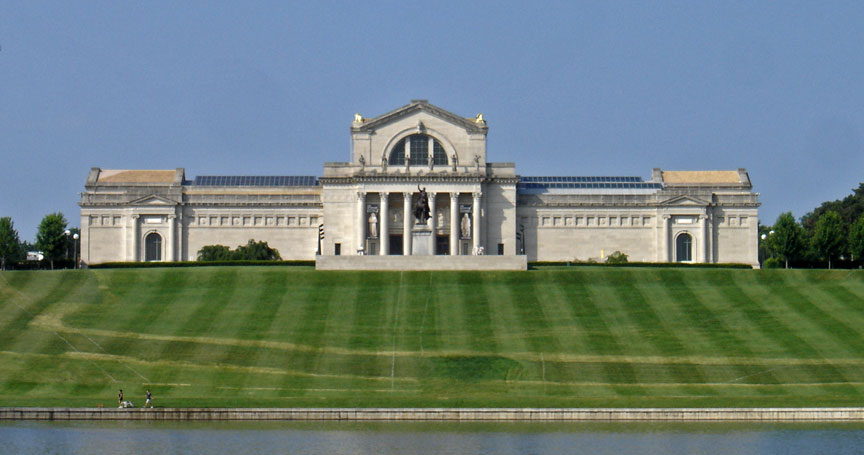 The largest parcels of land needed for the park belonged to Thomas S. Skinker, Isabella de Munn, Charles P. Chouteau and his sister Julia Maffitt and the estate of Robert Forsyth. Chouteau and Maffitt challenged the constitutionality of the new law while other landowners sought legal ownership of property purchased under the 1872 law, which had been ruled unconstitutional. In November, 1874, the Missouri Supreme upheld the new law and referred all questions of land ownership and value to the circuit court. 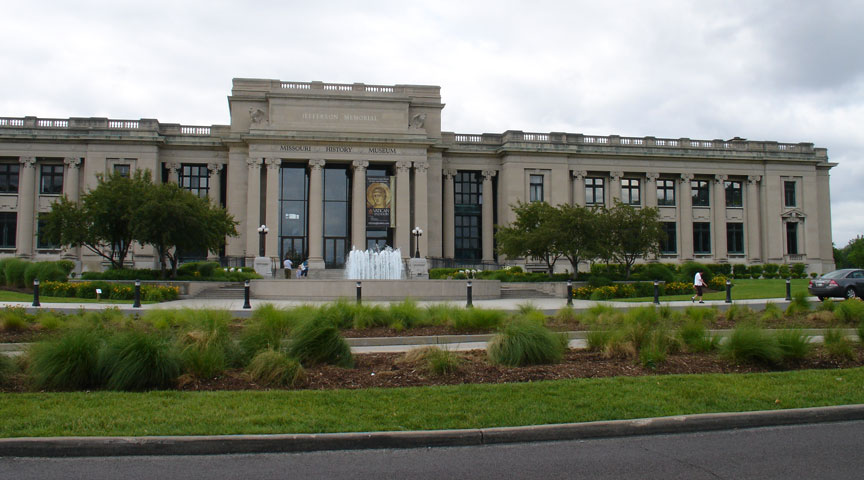 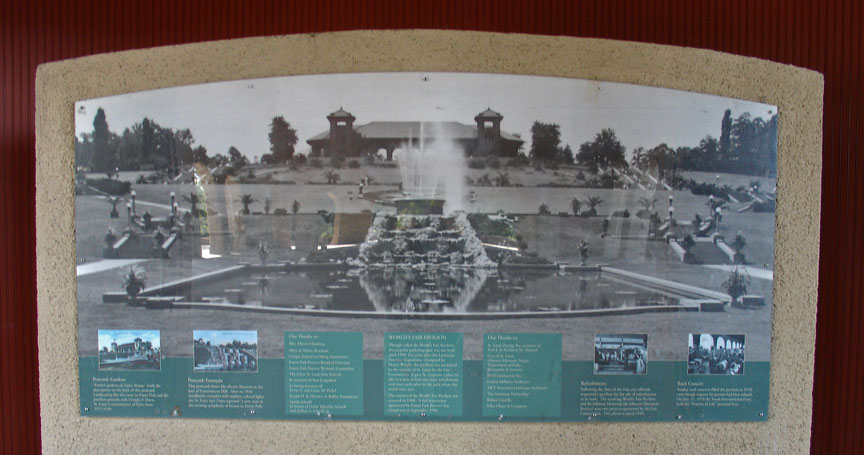 In 1904 St. Louis hosted the world at a major international World's Fair. The St. Louis World's Fair celebrated the centennial of the Louisiana Purchase. It was delayed from a planned opening in 1903 to 1904 to allow for full-scale participation by more states and foreign countries. The Fair opened April 30, 1904, and closed December 1, 1904. Of notable interest is that St. Louis had held an annual Saint Louis Exposition (1884) since the 1880s as agricultural, trade, and scientific exhibitions, but this event was not held in 1904 due to the World's Fair. 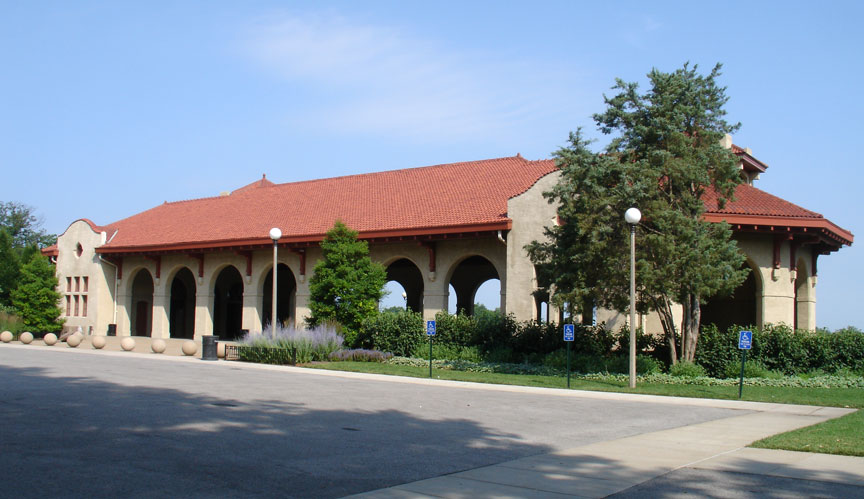 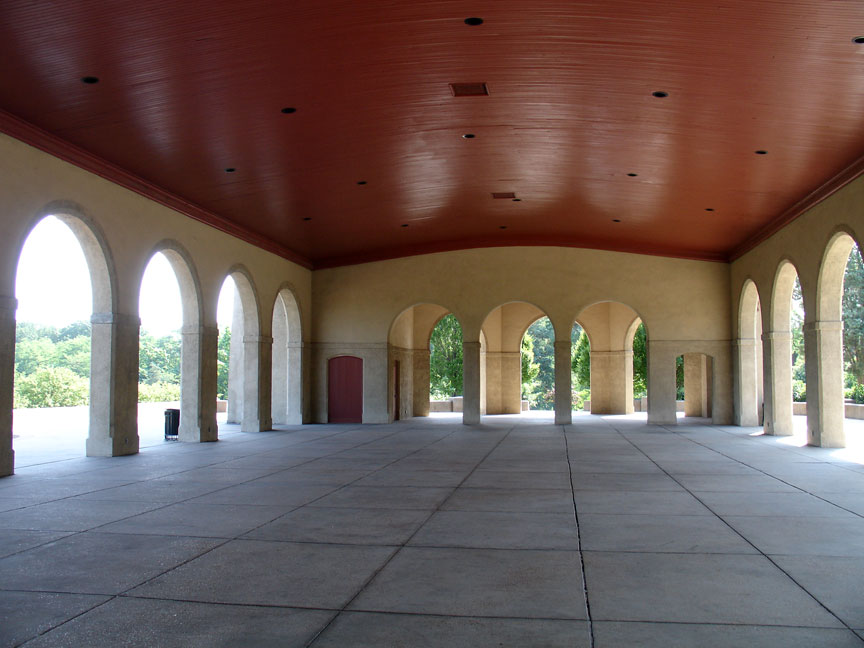 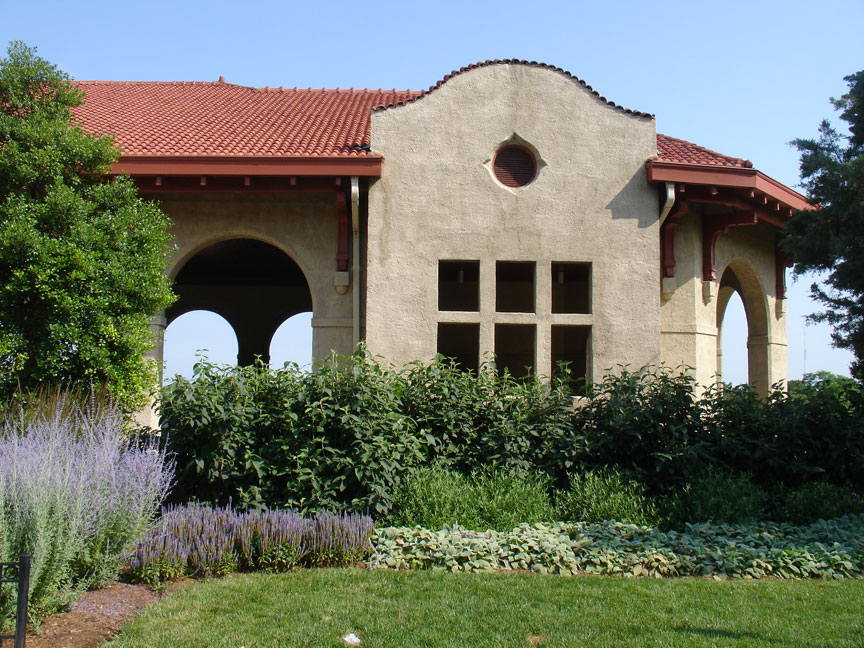 The Fair's 1,200 acre (4.9 km²) site, designed by George Kessler, was located at the present-day grounds of Forest Park and on the campus of Washington University, and was the largest fair to date. There were over 1,500 buildings, connected by some 75 miles (120 km) of roads and walkways. It was said to be impossible to give even a hurried glance at everything in less than a week. The Palace of Agriculture alone covered some 20 acres (324,000 m²). 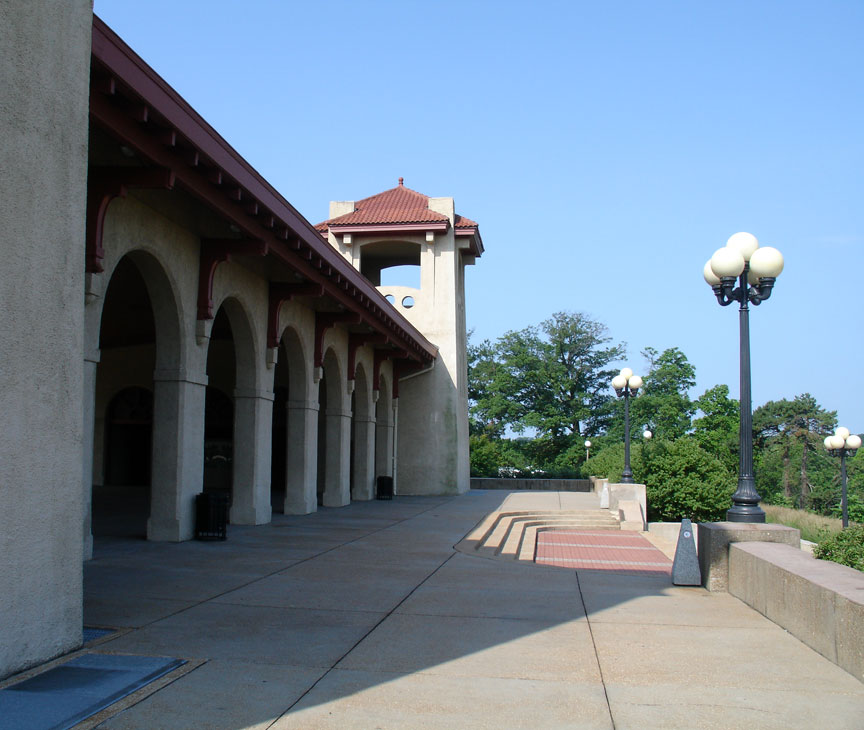 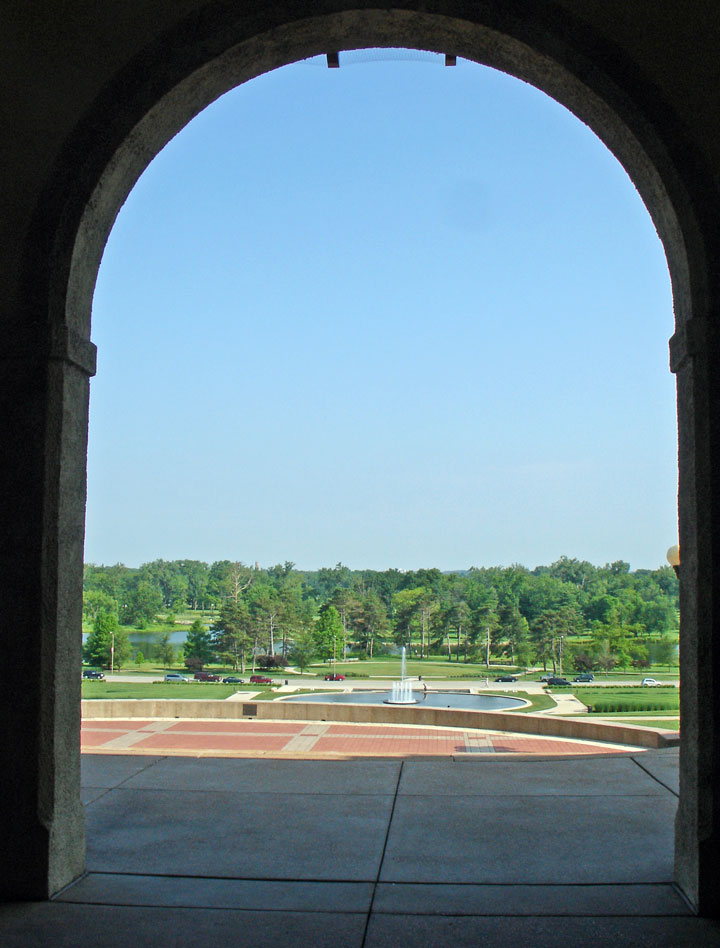 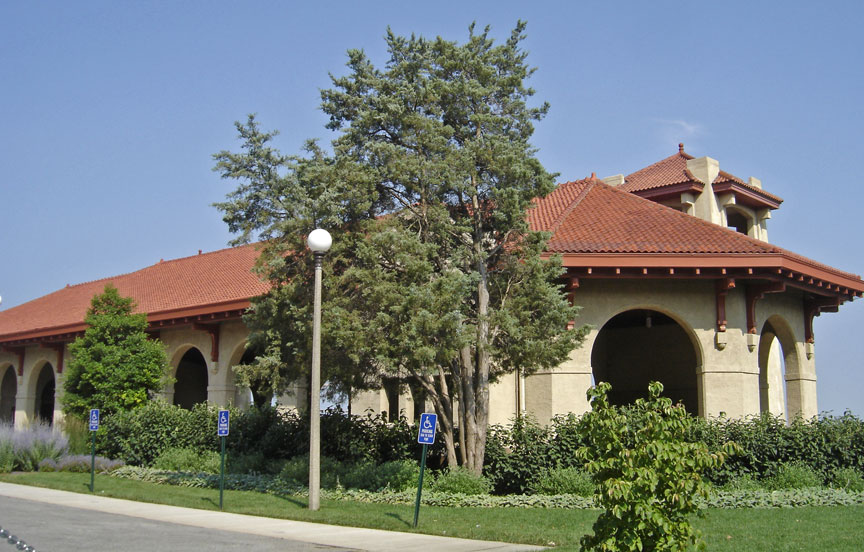 Exhibits were staged by 62 foreign nations, the United States government, and 43 of the then-45 U.S. states. These featured industries, cities, private organizations and corporations, theater troupes, and music schools. There were also over 50 concession-type amusements found on "The Pike"; they provided educational and scientific displays, exhibits and imaginary 'travel' to distant lands, history and local boosterism (including Louis Wollbrinck's "Old St. Louis") and pure entertainment. 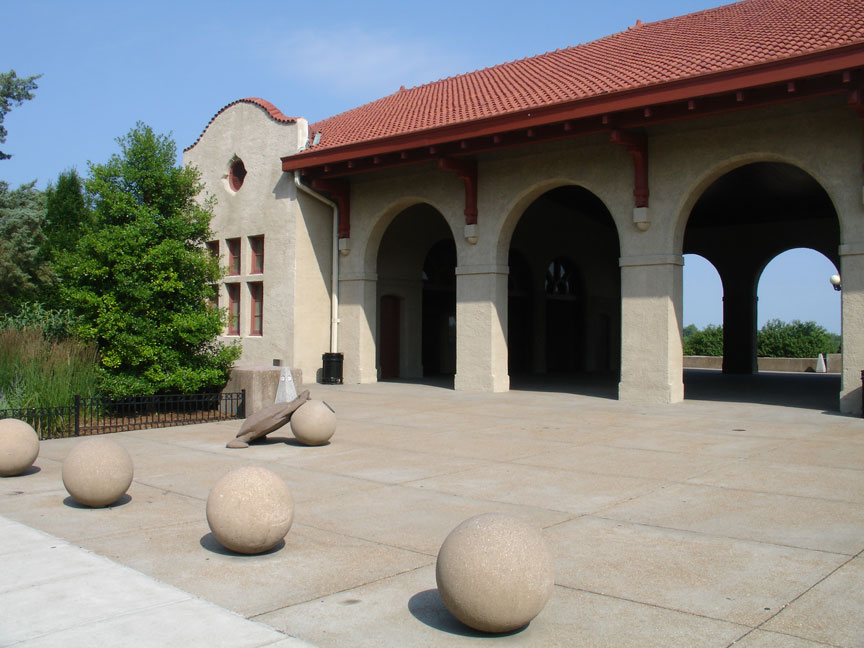 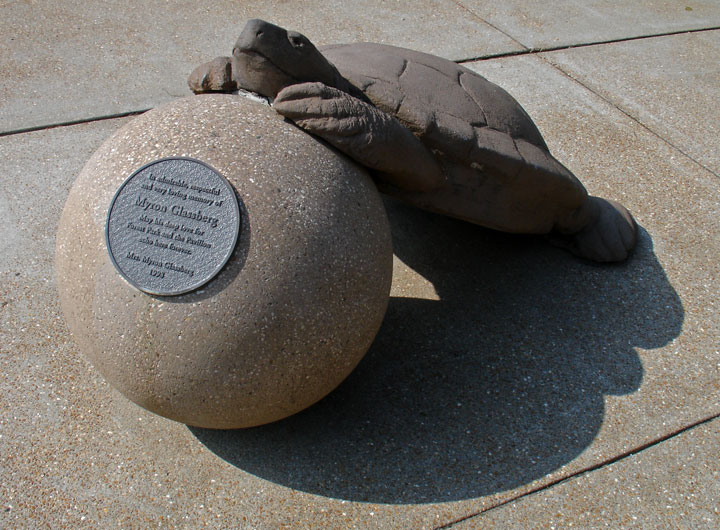 After the fair, many of the pavilions and exhibits were demolished (including the original Ferris Wheel) or removed. What buildings remain became the seeds of future museums. The aviary gave root to the zoo, for example. The Palace of the Fine Arts became the Saint Louis Art Museum. 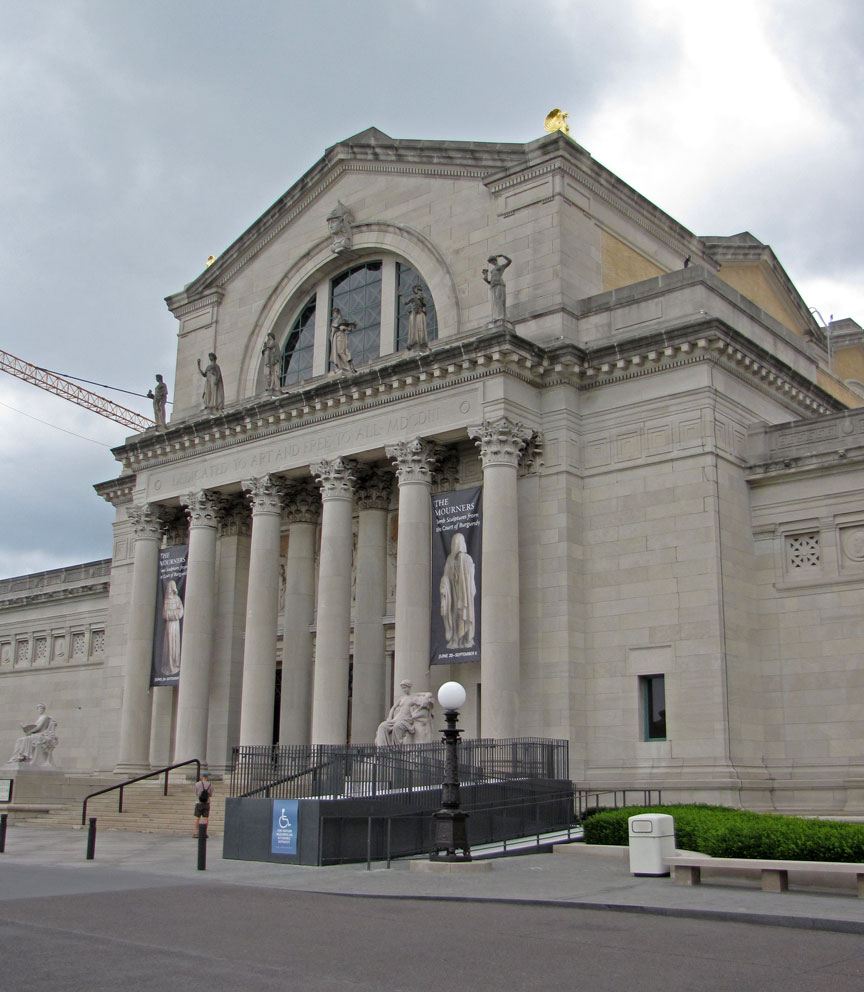