A whale shark in the Georgia Aquarium

The whale shark, Rhincodon typus, is a slow filter feeding shark that is the largest living fish species. It can grow up to 12.2 m. (40 ft.) in length and can weigh up to 13.6 tones (15 short tons). This distinctively-marked shark is the only member of its genus Rhincodon and its family, Rhincodontidae (called Rhinodontes before 1984), which is grouped into the subclass Elasmobranchii in the class Chondrichthyes. The shark is found in tropical and warm oceans and lives in the open sea and can live for about 70 years. The species is believed to have originated about 60 million years ago.

The species was first identified in April 1828 following the harpooning of a 4.6-metre (15.1 ft) specimen in Table Bay, South Africa. It was described the following year by Andrew Smith, a military doctor associated with British troops stationed in Cape Town. He proceeded to publish a more detailed description of the species in 1849. The name "whale shark" comes from the fish's physiology; that is, a shark as large as a whale that shares a similar filter feeder eating mode. Known as a deity in a Vietnamese religion, the whale shark is called "Ca Ong", which literally translates as "Sir Fish". In Mexico, and throughout much of Latin America, the whale shark is known as "pez dama" or "domino" for its patterns of spots. Whales sharks go by the name of "Sapodilla Tom" in Belize due to the regularity of sightings near the Sapodilla Cayes on the Belize Barrier Reef. In Africa, the names for the whale shark are very evocative: "Papa Shillingi" in Kenya came about as it is believed that God threw shillings upon the shark which are now its spots, and in Madagascar whale sharks are known locally as "Marokintana" which means "Many stars". In Indonesia, Javanese also called this species referring to star as "geger lintang" which has meaning "stars in the back". 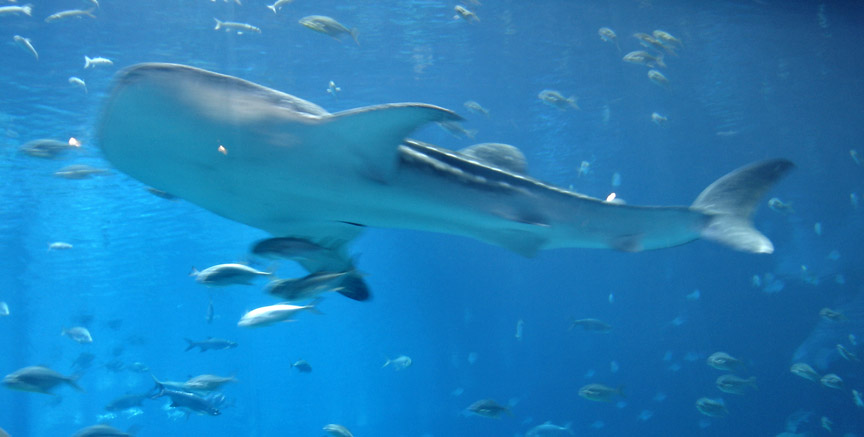 The whale shark inhabits the world's tropical and warm-temperate oceans. While thought to be primarily pelagic, seasonal feeding aggregations of the sharks occur at several coastal sites such as Gladden Spit in Belize; Ningaloo Reef in Western Australia; Útila in Honduras; Donsol, Pasacao and Batangas in the Philippines; off Isla Mujeres and Isla Holbox in Yucatan Mexico; Ujung Kulon national Park in Indonesia; Nosy Be in Madagascar and the Tanzanian islands of Pemba and Zanzibar. Though it is often seen offshore, it has also been found closer to shore, entering lagoons or coral atolls, and near the mouths of estuaries and rivers. Its range is generally restricted to about ±30 ° latitude. It is capable of diving to depths of over 700 meters (2,300 ft) . The whale shark is generally solitary yet occasionally aggregating in groups when feeding at sites with abundant food.

As a filter feeder it has a capacious mouth which can be up to 1.5 meters (4.9 ft) wide and can contain between 300 and 350 rows of tiny teeth. It has five large pairs of gills. Two small eyes are located towards the front of the shark's wide, flat head. The body is mostly grey with a white belly; three prominent ridges run along each side of the animal and the skin is marked with a "checkerboard" of pale yellow spots and stripes. These spots are unique to each whale shark and because of this they can be used to identify each animal and hence make an accurate population count. Its skin can be up to 10 centimeters (3.9 in) thick. The shark has a pair each of dorsal fins and pectoral fins. A juvenile whale shark's tail has a larger upper fin than lower fin while the adult tail becomes semi-lunate (or crescent-shaped). The whale shark's spiracles are just behind the eyes.

The whale shark is not an efficient swimmer since the entire body is used for swimming, which is unusual for fish and contributes to an average speed of only around 5-kilometre-per-hour (3.1 mph). The largest specimen regarded as accurately recorded was caught on November 11, 1947, near the island of Baba, not far from Karachi, Pakistan. It was 12.65 meters (41.50 ft) long, weighed more than 21.5 tones (47,300 lb), and had a girth of 7 meters (23.0 ft). Stories exist of vastly larger specimens — quoted lengths of 18 meters (59 ft) are not uncommon in the popular shark literature — but no scientific records exist to support their existence. In 1868 the Irish natural scientist Edward Perceval Wright spent time in the Seychelles, during which he managed to obtain several small whale shark specimens, but claimed to have observed specimens in excess of 15 meters (49.2 ft), and tells of reports of specimens surpassing 21 meters (68.9 ft).

In a 1925 publication, Hugh M. Smith describes a huge whale shark caught in a bamboo fish trap in Thailand in 1919. The shark was too heavy to pull ashore, but Smith estimated that the shark was at least 17 meters (56 ft) long, and weighed approximately 37 tones (81,500 lb), which have been exaggerated to a more precise measurement of 17.98 meters (58.99 ft) and weight 43 tones in recent years. A shark caught in 1994 near Tainan County in Southern Taiwan is reported to have weighed 35.8 tonnes (78,887 lb). There have even been claims of whale sharks of up to 23 meters (75 ft). In 1934 a ship named the Maurguani came across a whale shark in the Southern Pacific Ocean, rammed it, and the shark consequently became stuck on the prow of the ship, supposedly with 4.6 meters (15.1 ft) on one side and 12.2 meters (40.0 ft) on the other. No reliable documentation exists of those claims and they remain little more than "fish-stories". 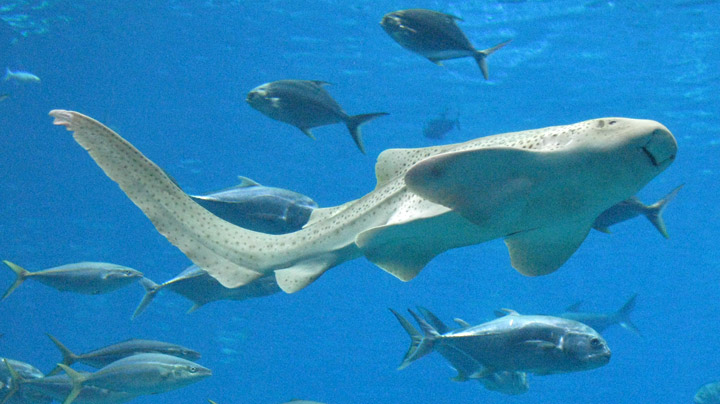 another shark in the big tank

The whale shark is a filter feeder — one of only three known filter feeding shark species (along with the basking shark and the megamouth shark). It feeds on phytoplankton, macro-algae, plankton, krill and small nektonic life, such as small squid or vertebrates. The many rows of teeth play no role in feeding; in fact, they are reduced in size in the whale shark. Instead, the shark sucks in a mouthful of water, closes its mouth and expels the water through its gills. During the slight delay between closing the mouth and opening the gill flaps, plankton is trapped against the dermal denticles which line its gill plates and pharynx. This fine sieve-like apparatus, which is a unique modification of the gill rakers, prevents the passage of anything but fluid out through the gills (anything above 2 to 3 mm in diameter is trapped). Any material caught in the filter between the gill bars is swallowed. Whale sharks have been observed "coughing" and it is presumed that this is a method of clearing a build up of food particles in the gill rakers.
Whale sharks congregate at reefs off the Belizean Caribbean coast, supplementing their ordinary diet by feeding on the spawn of giant cubera snappers, which spawn in these waters between the full and new moons of March through September. 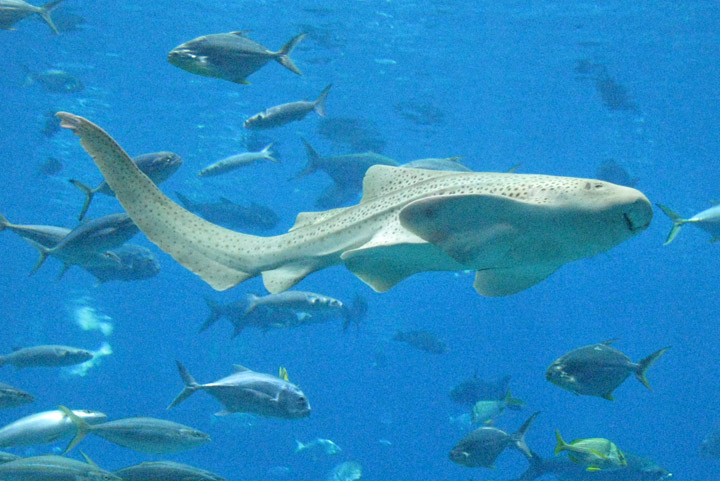 The whale shark is an active feeder, targeting concentrations of plankton or fish. It is able to ram filter feed or can gulp in a stationary position. The shark can circulate water at a rate up to 1.7 L/s (3.5 U.S. pint/s).. This is in contrast to the basking shark, which is a passive feeder and does not pump water; it relies on its swimming to force water over its gills. 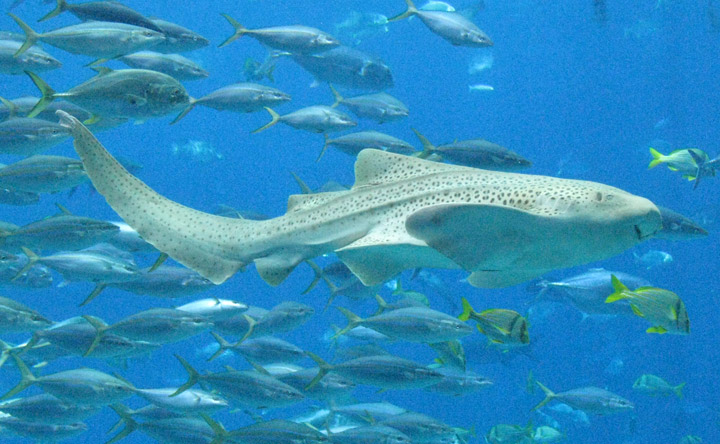 This species, despite its enormous size, does not pose any significant danger to humans. It is a frequently cited example when educating the public about the popular misconceptions of all sharks as "man-eaters". They are actually quite gentle and can be playful with divers. There are unconfirmed reports of sharks lying still, upside down on the surface to allow divers to scrape parasites and other organisms from their bellies. Divers and snorkelers can swim with this giant fish without any risk apart from unintentionally being struck by the shark's large tail fin. 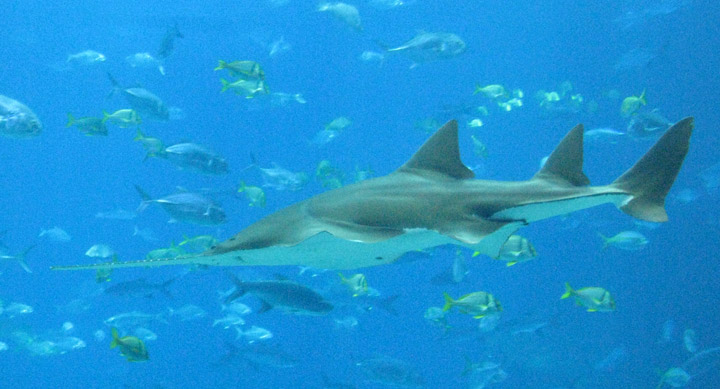 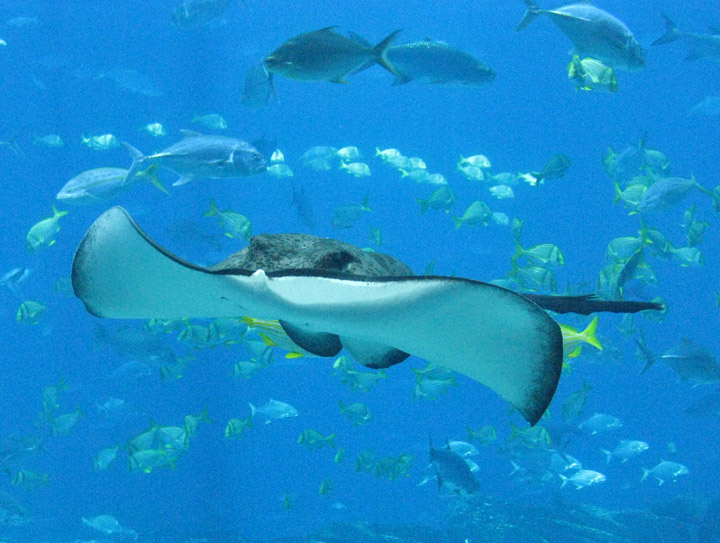 The reproductive habits of the whale shark are obscure. Based on the study of a single egg recovered off the coast of Mexico in 1956, it was believed to be oviparous, but the capture of a female in July 1996 which was pregnant with 300 pups indicates that they are ovoviviparous. The eggs remain in the body and the females give birth to live young which are 40 centimetres (15.7 in) to 60 centimetres (23.6 in) long. It is believed that they reach sexual maturity at around 30 years and the life span has been estimated to be over 100 years. 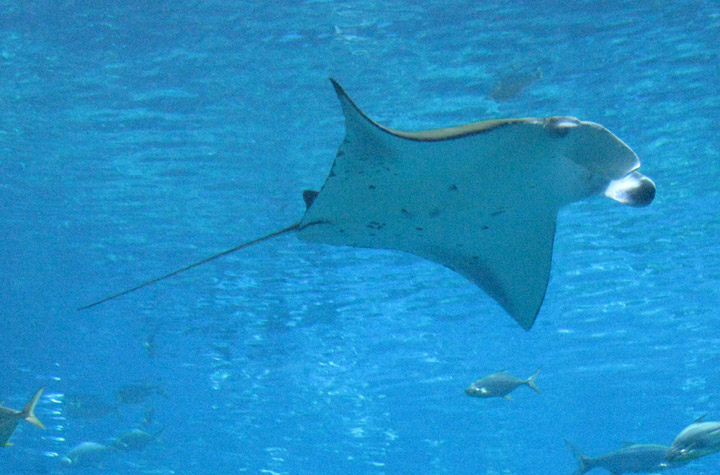 Other fish in the Big Tank 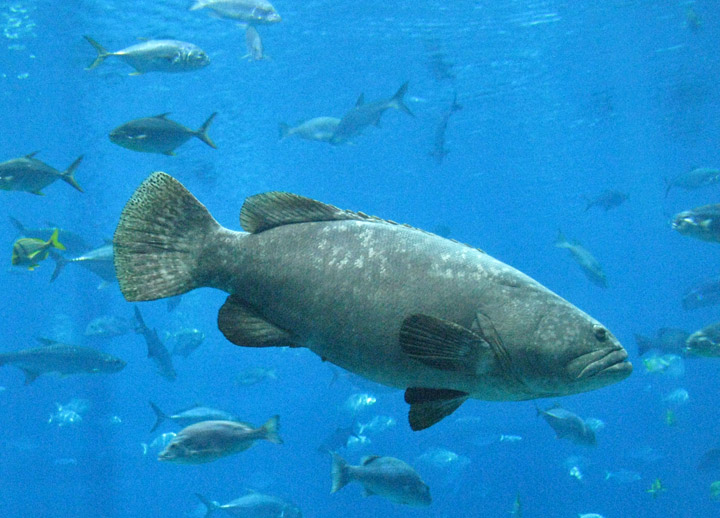 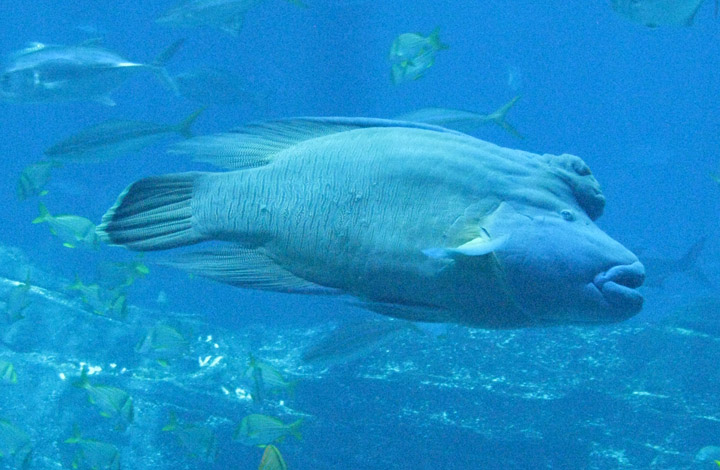