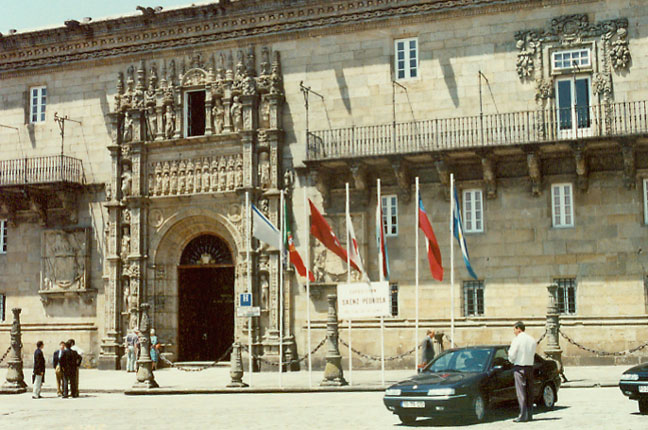 Santiago de Compostela, World Heritage City and capital of Galicia, is the final landmark on the St. James pilgrimage route. Centuries of splendour and development have left us an urban layout in which the medieval Christian heritage is mixed with monumental Baroque buildings. The Parador de Turismo de Santiago, right in the Plaza del Obradoiro, welcomes guests and offers them the opportunity to taste the best of the Galician culinary tradition. It is a tradition which reaches its peak during the Festival of the Apostle Saint James, declared of International Tourist Interest. 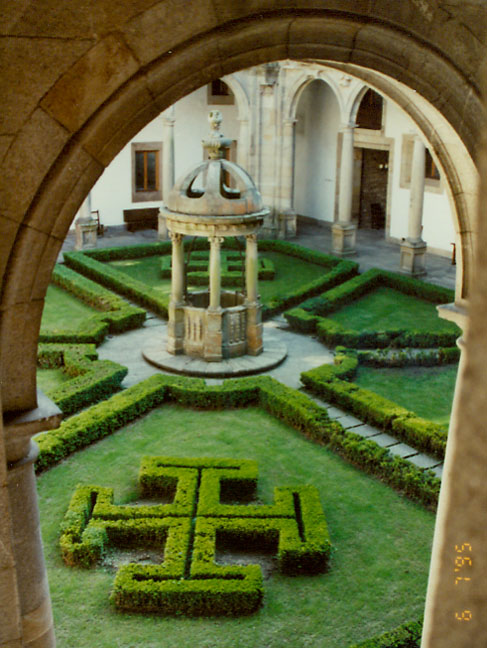 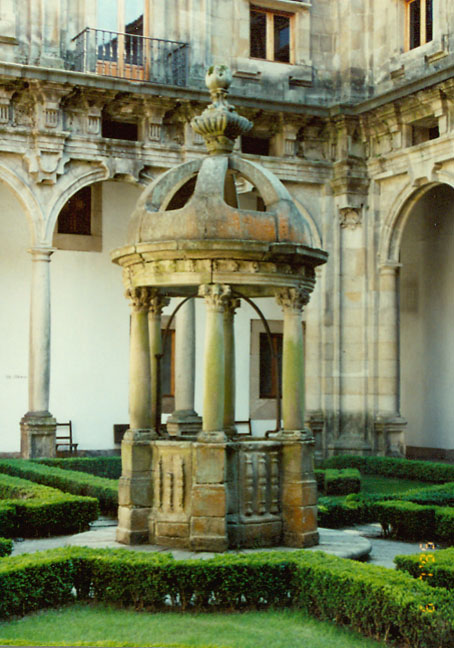 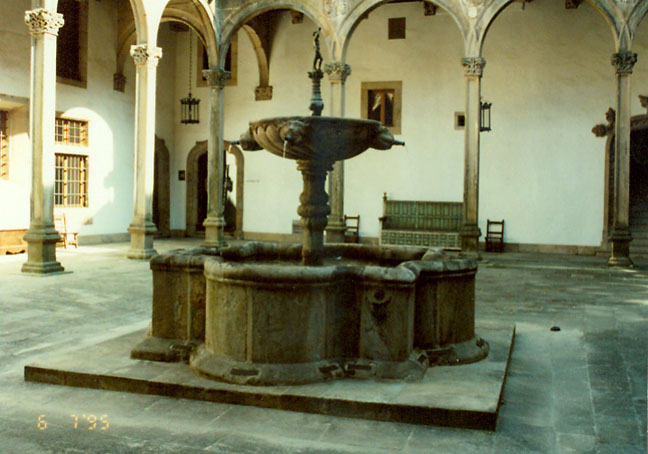 courtyards of the Parador 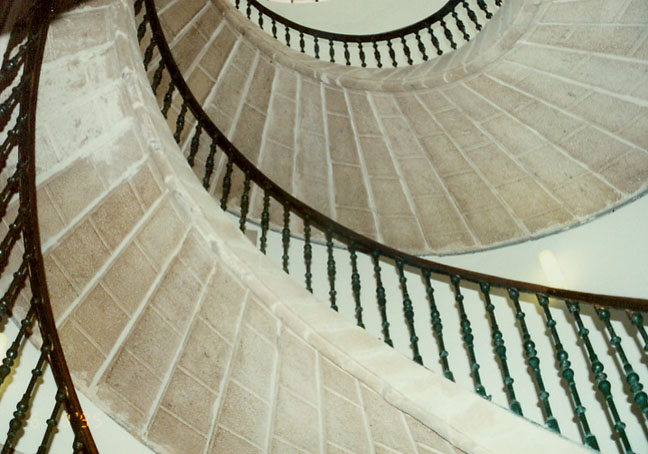 stairwell in the Parador

The legend tells that the appearance of the remains of the Apostle Saint James were the origin of this city (9th C.), which soon became a centre for pilgrimages and a holy city on a par with Jerusalem and Rome. Medieval Santiago experienced centuries of scientific, artistic and literary interchange thanks to the large numbers of pilgrims arriving from all over Europe. The Pilgrim's Road to Santiago, together with the city of Santiago of Compostela, is today a World Heritage Site because of the historic and artistic nature of the route. With the Catholic Monarchs and Archbishop Fonseca, the University arrived in the city and, in the centuries that followed, several religious orders established monasteries and churches in its streets, contributing to the rich Renaissance and Baroque appearance of the Galician capital. 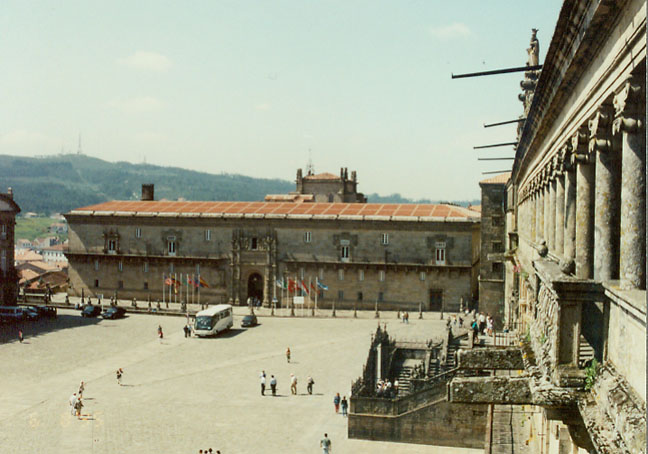 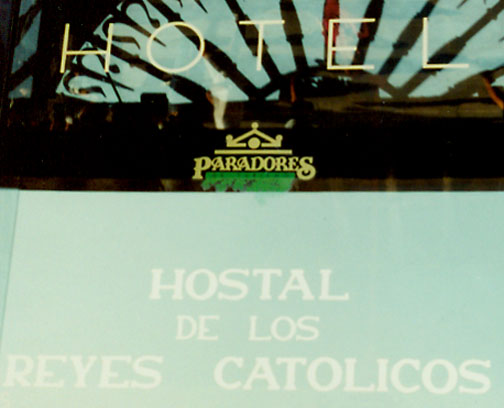 The centre of the city is the Plaza del Obradoiro, which has important monuments, including the Cathedral. Its current Baroque façade gives way to a Romanesque doorway from the original building, the Pórtico de la Gloria, created by Master Mateo in the 12th century. Inside, Romanesque and Gothic elements alternate with other Baroque style decoration. In the Cathedral you have to follow the tradition: bump your head on the figure of its creator to obtain prudence and wisdom. At the main altar, a bust of the Apostle Saint James awaits your embrace. Another tradition is the waving of a huge incense holder, "El Botafumeiro", in the main transept, which even reaches the vaults. 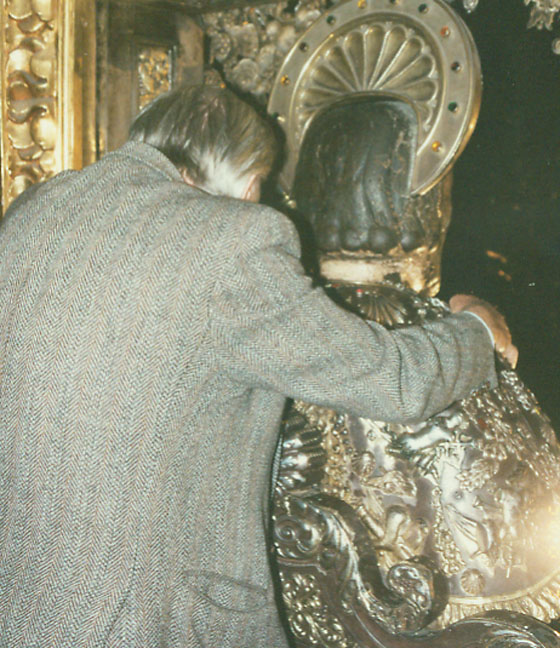 embracing the bust of the Apostle Saint James

Other squares, the Plaza Quintana, Plaza Azabachería and Plaza de Platerías surround the various doors and façades of the Cathedral. The latter is the only Romanesque one. 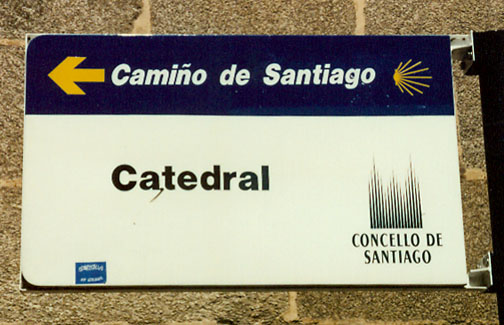 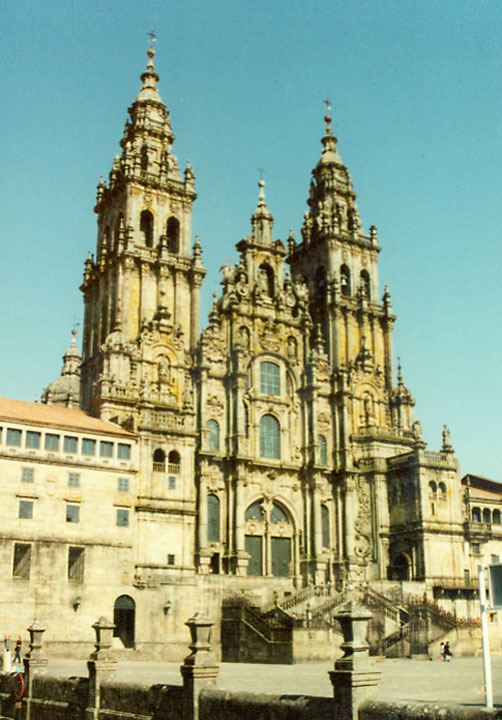 Baroque façade of the Cathedral 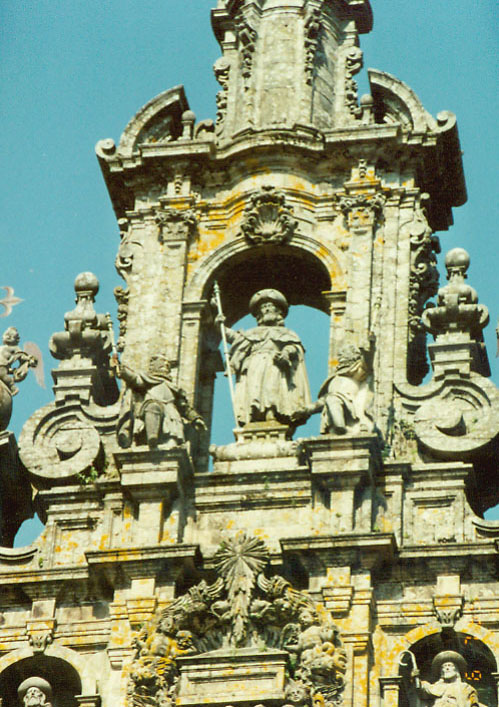 detail of the facade 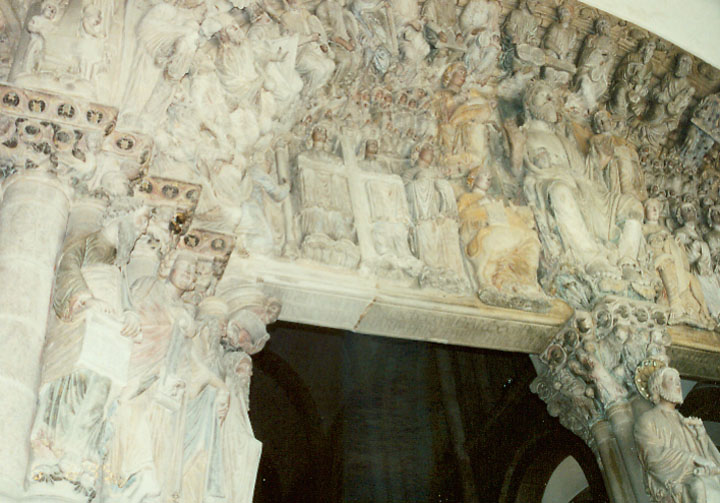 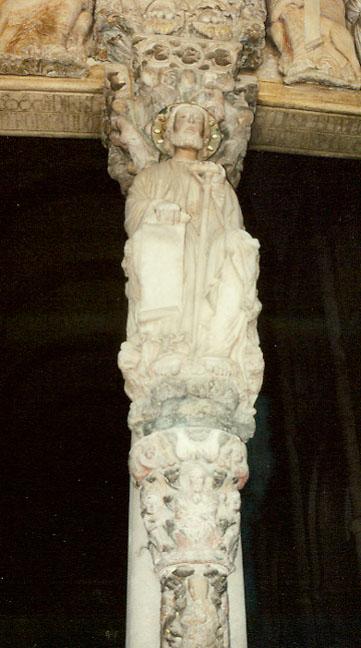 an interior column of the the Romanesque doorway from the original building, 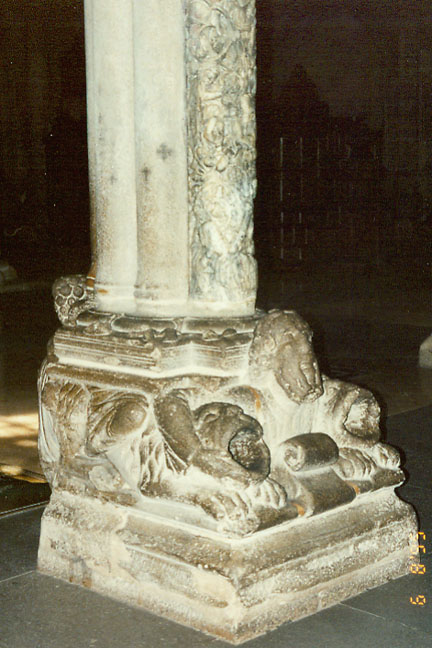 lower part of the column 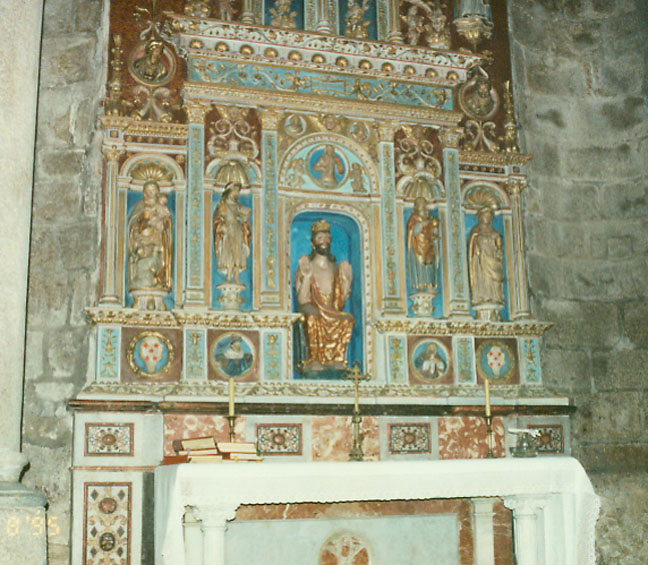 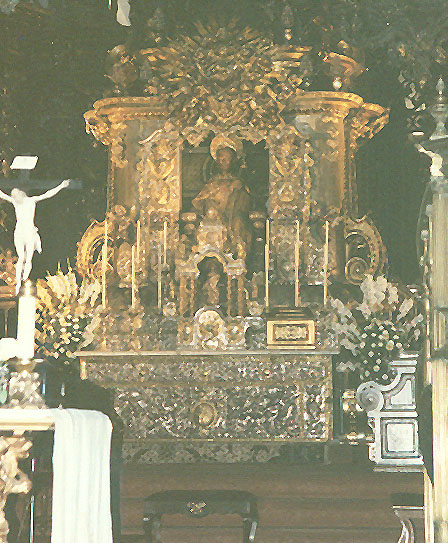 the elaborate statue of Saint James 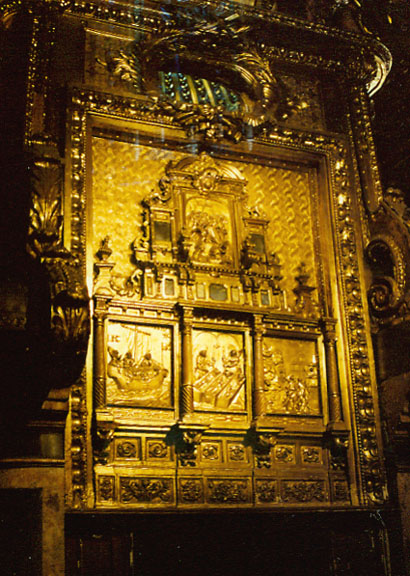 at the rear of the statue of Saint James 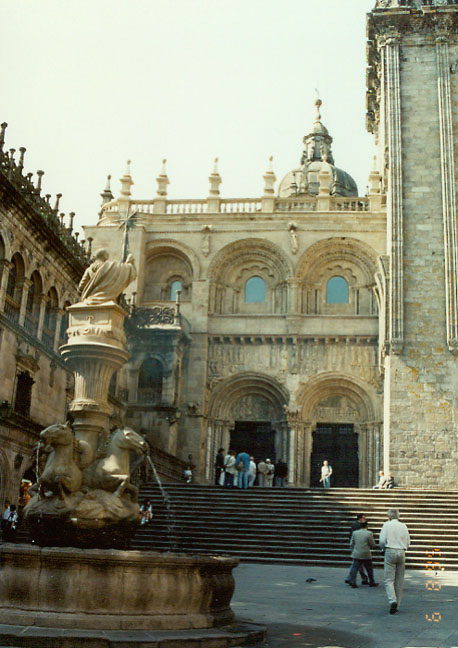 Romanesque door to the Cathedral

Beautiful examples of the civil Romanesque, Renaissance and Neoclassical styles also show themselves in Obradoiro. The Pazo de Gelmírez, the College of San Jerónimo and the Pazo Raxoi accompany the Cathedral and the Old Royal Hospital, today the five-star luxury 'Hostal de los Reyes Católicos', Parador de Turismo. This is an exceptional opportunity to spend the night in a building with more than 500 years of history right in the heart of the medieval city. 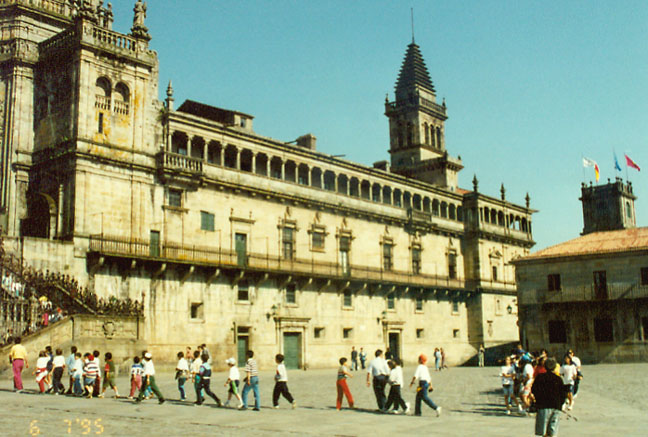 The importance of the religious orders associated with the Pilgrim's Road to Santiago and the University mean this area has many churches, convents and monasteries, as well as aristocratic houses like those of El Cabildo, La Parra and Los Canónigos. We could point out the monasteries of San Martín Pinario and San Paio de Antealtares (17th C.), the convent of San Francisco and the college of San Clemente. 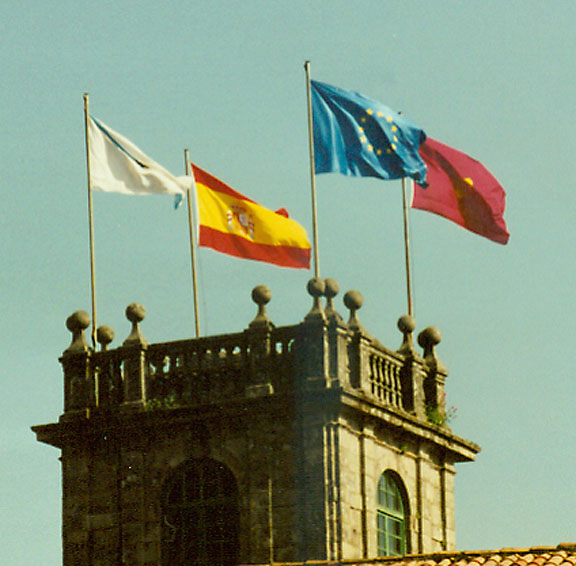 Santiago de Compostela, World Heritage City
and capital of Galicia, a part of Spain in the European Union

After touring the oldest streets of the city, which date from the 12th century - Rúas Franco, Vilar and Nova - we can go to the food market, a medieval structure. Near here stands the University (of Neoclassical plan), the Romanesque church of San Fiz de Slovio and the Baroque church of San Agustín. 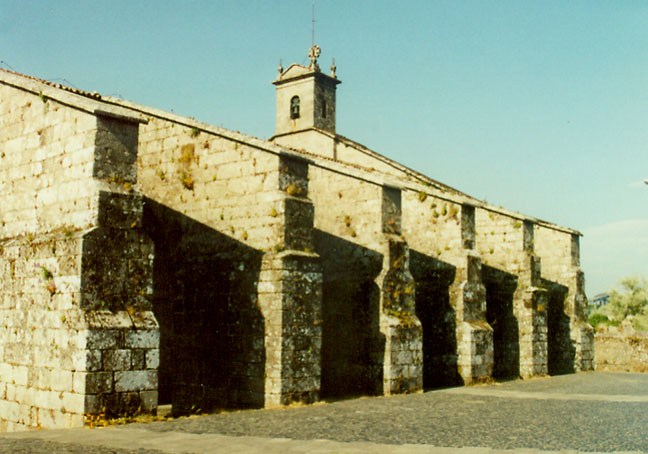 Without going far from the historic centre, we can also visit the Museum in the Collegiate Church of Sar, the Museum of the Galician People (in the Convent of Santo Domingo de Bonaval), the Pilgrimage Museum and the Galician Centre of Contemporary Art. 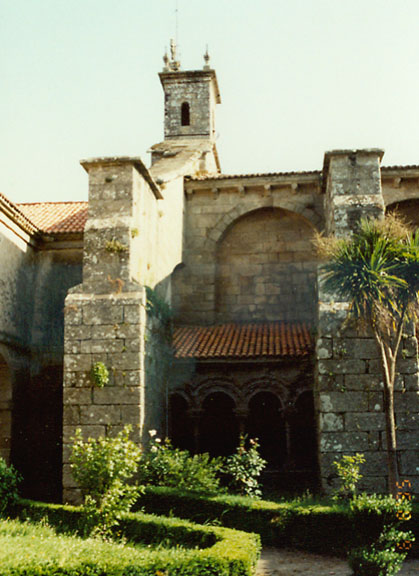 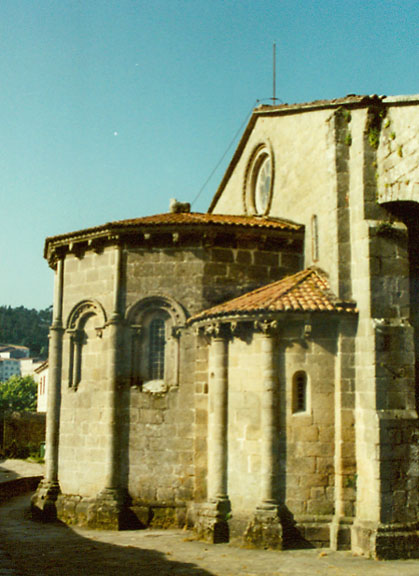 apse view of the Collegiate Church of Sar 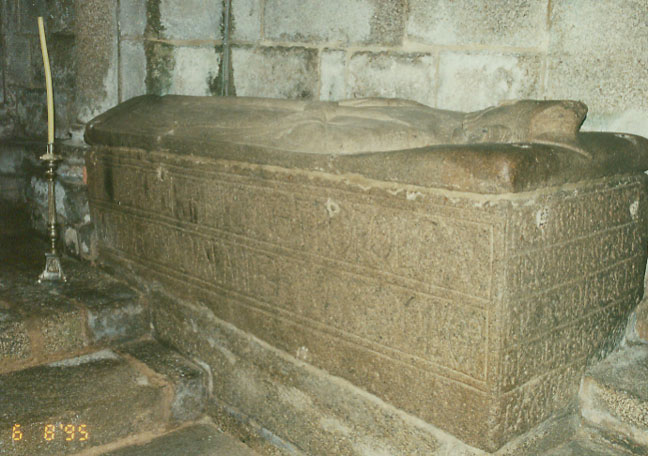 tomb in the Collegiate Church of Sar

The best time to go to Santiago de Compostela is during the Festivals of the Apostle St. James, a festival declared of International Tourist Interest held on 25 July. During the festival it is easy to taste products as closely associated with St. James as scallops, locust lobsters and Santiago cake. Fish and shellfish from the rias, Santiago parsnip tops and Padrón peppers make up one of the most varied cuisines in Galicia, all washed down with wines from one of the five Galician denominations of origin. 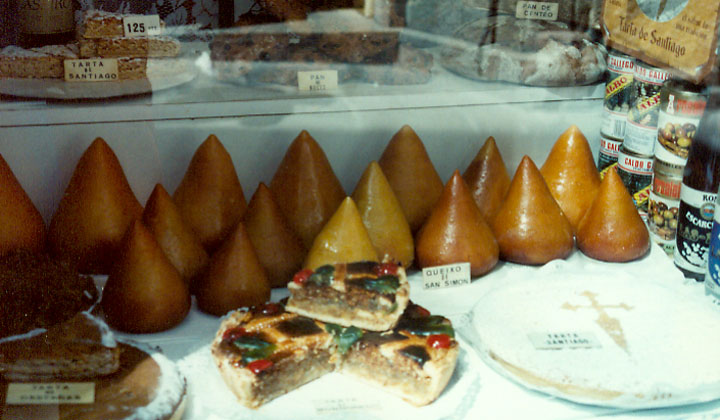 The capital of the Galician community is a perfect starting point for touring the whole province of A Coruña. On its coast you will find the Rías Baixas, with medieval fishing villages like Noia and Muros. On the Costa da Morte, an area of cliffs above the Atlantic, are the "end of the world" lighthouses, like that at Finisterre (Fisterra), a place that for centuries was considered the end of the known world. Corcubión, Camariñas and Corme-Laxe are other rias with fishing villages and home to some of the best barnacles in the region. The Rías Altas offer us places like A Coruña, Betanzos and Ferrol, as well as Pontedeume, Viveiro and Ribadeo, among others. 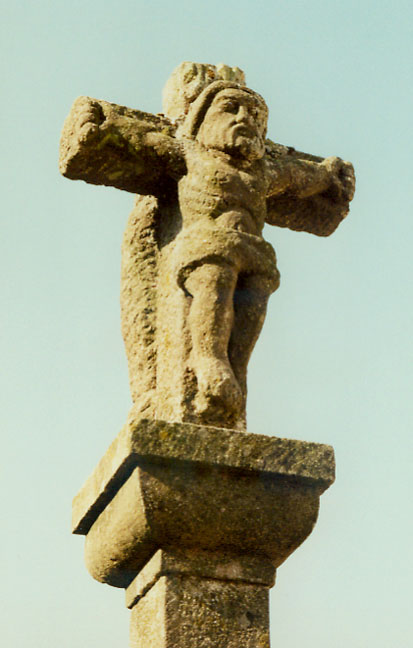 a cross along the way

Inland we can tour the towns and villages that the Pilgrim's Road to Santiago passes through, like Samos, Portomarín, Melide and Lavacolla. The Galician monastery route takes you in this province to the Cistercian abbey at Sobrado dos Monxes and the monasteries of Caaveiro and Monfero in the Fragas del Eume Natural Park. As well as this park, the rich Galician landscape and environment takes us to the Corrubedo dune complex and the Carregal and Vixán lagoons, which are right on the Coruña coast. 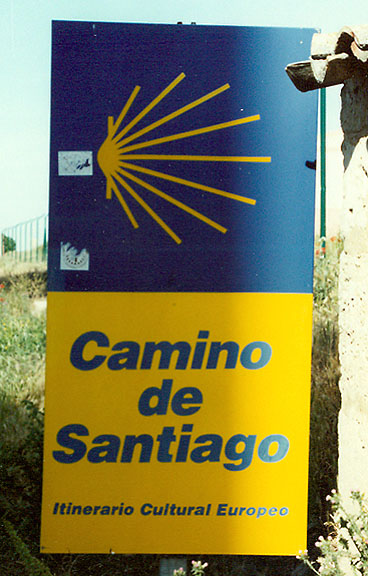 the Camino de Santiago
an itinerary of Cultural Europe